It's time to take Trump seriously, figuratively, and literally

“Democracy is not a state. It is an act, and each generation must do its part to help build what we called the Beloved Community, a nation and world society at peace with itself,” – the late John Lewis. He left the New York Times a posthumous essay to be published the day of his funeral. 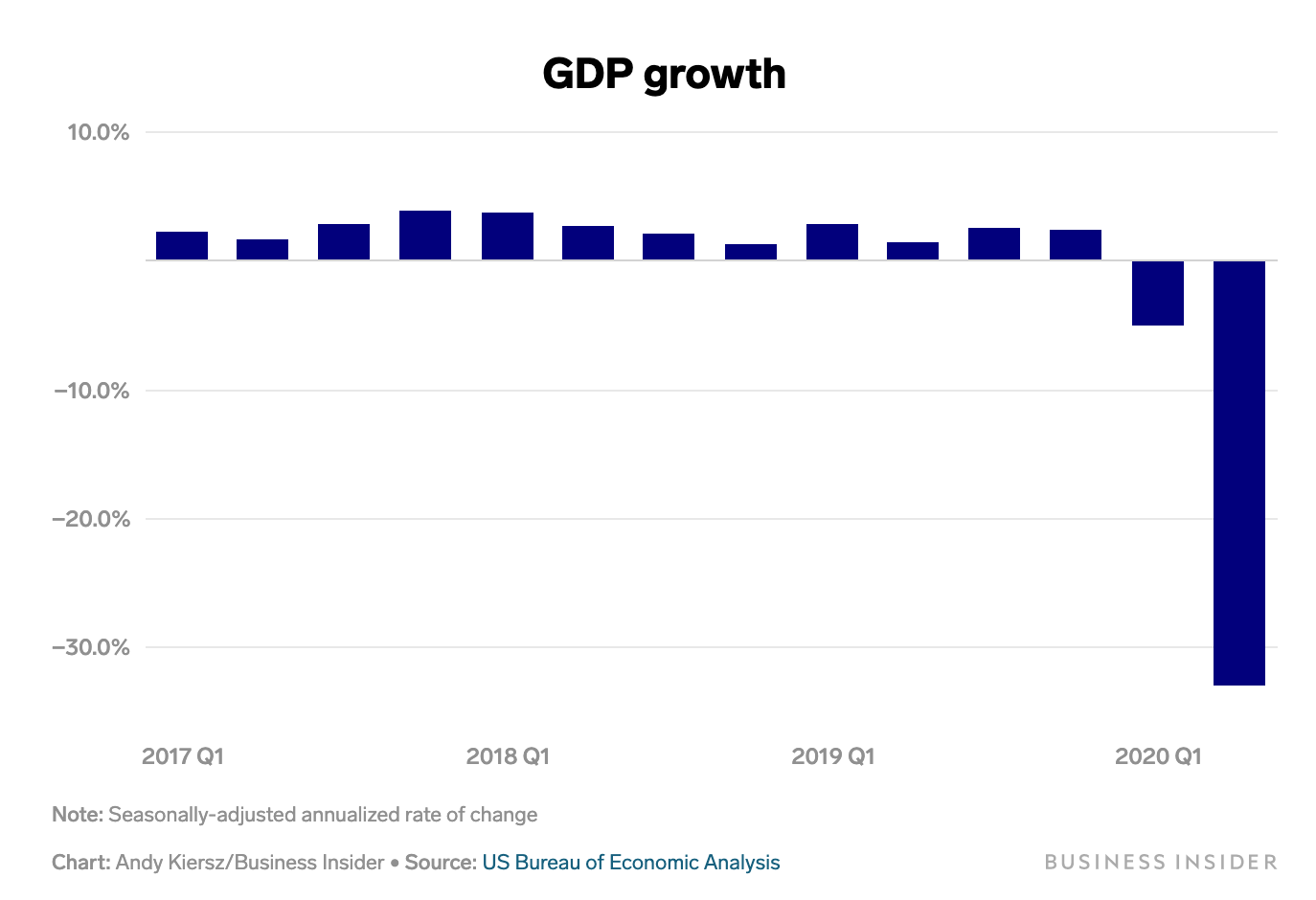 GDP plunged at an annualized rate of 33% in the second quarter, by far a record drop. The pandemic lockdowns caused the economy to shrink about 10% in the quarter. Meanwhile, weekly unemployment claims increased again to 1.43 million, the 19th week in a row with more than 1 million claims.

Former GOP presidential candidate Herman Cain has died at 74, apparently of COVID. He had been hospitalized for weeks, and had contracted the virus shortly after attending President Trump’s Tulsa rally. A former restaurateur, Cain briefly led the GOP field in 2011. Trump considered him for the Fed board in 2019, but didn’t nominate him after widespread opposition.

This morning President Trump tweeted about delaying the election due to the pandemic.

In April Trump’s rival, Vice President Joe Biden, predicted the President might try to delay the election if his poll numbers looked bad, and they look hideous. 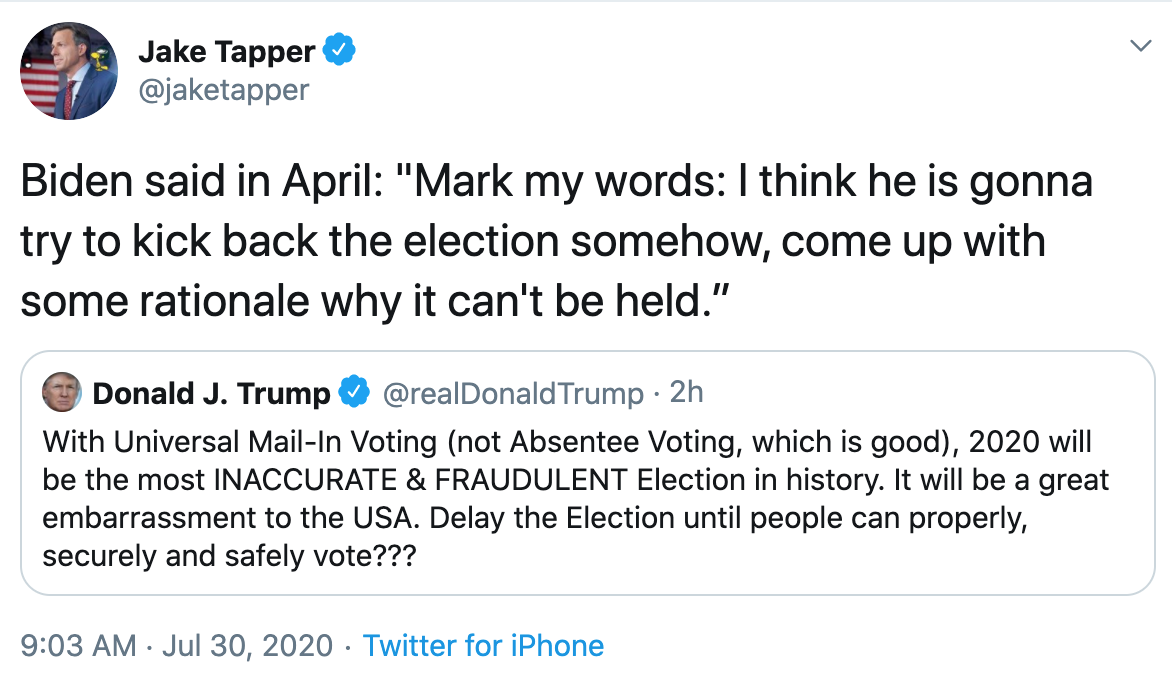 Remember that this is a pandemic that spun out of control largely because of a lack of federal response. Trump only put on a mask himself a few weeks ago. The White House could create the conditions for safe elections by competently handling this crisis, but it won’t. That’s why we’re here.

Trump works by gut instinct, and he has never let his ignorance of how the US government works – or the limits of presidential power – stop him from trampling on the rights of others. (See: His multiple attempts at passing a travel ban on Muslim countries.) The fact that he can’t change the date of the election won’t stop him from knocking on every door, or trying to open any window he can, into victory.

We already have evidence that Trump will stop at nothing to improve his chances for reelection. Two weeks ago he tried to get Republicans to defund coronavirus testing in Congress’ upcoming pandemic relief bill to make infection numbers look better for him.

If you think someone who is willing to do that won’t try to hinder the democratic process, I have a gold-plated, Trump-branded bridge to sell you. And I don’t just mean Trump will try messing with vote counts, I mean he will be messing with our faith in the outcome of this election and the process of democracy itself. That’s the bare minimum of what he will do.

It is in this man’s inherent nature to use all of his power – unfortunately, the power of the presidency – for his own power’s sake. That is exactly how Henry Wallace, Vice President of this country from 1941 to 1945, described American fascists.

“A fascist is one whose lust for money or power is combined with such an intensity of intolerance toward those of other races, parties, classes, religions, cultures, regions or nations as to make him ruthless in his use of deceit or violence to attain his ends. The supreme god of a fascist, to which his ends are directed, may be money or power; may be a race or a class; may be a military, clique or an economic group; or may be a culture, religion, or a political party.”

Be vigilant. Take Donald Trump seriously, literally, figuratively. He is a desperate demagogue limited only by what we the people will abide. – Linette Lopez

If you’re enjoying this story,

sign up now for the Insider Today newsletter to receive more of these insights from Henry Blodget and David Plotz. 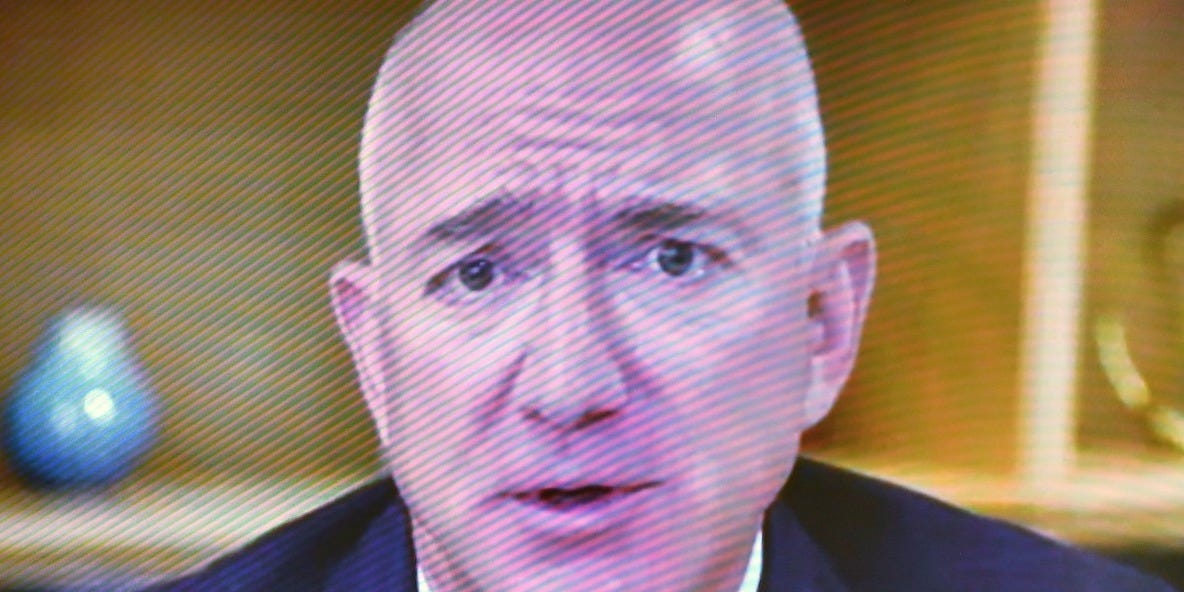 Now we know what Jeff Bezos’ worried face looks like

Four masters of Silicon Valley – the CEOs of Apple, Google, Amazon and Facebook – testified before Congress to answer for their anti-competitive behaviour yesterday, and in stark contrast to previous hearings they were visibly shaken by the questions they were asked.

As I put in my column, we got to see Amazon CEO Jeff Bezos’ worried face.

Some highlights in case all you caught were the clips of Republicans screaming about being silenced (there was some of that, but there was more productive questioning):

All in all, the CEOs seemed caught off guard. They expected this hearing to be more of the same from Washington – a series of uninformed questions from geriatric senators who barely read email. It was not that. Catch the whole column here.– LL 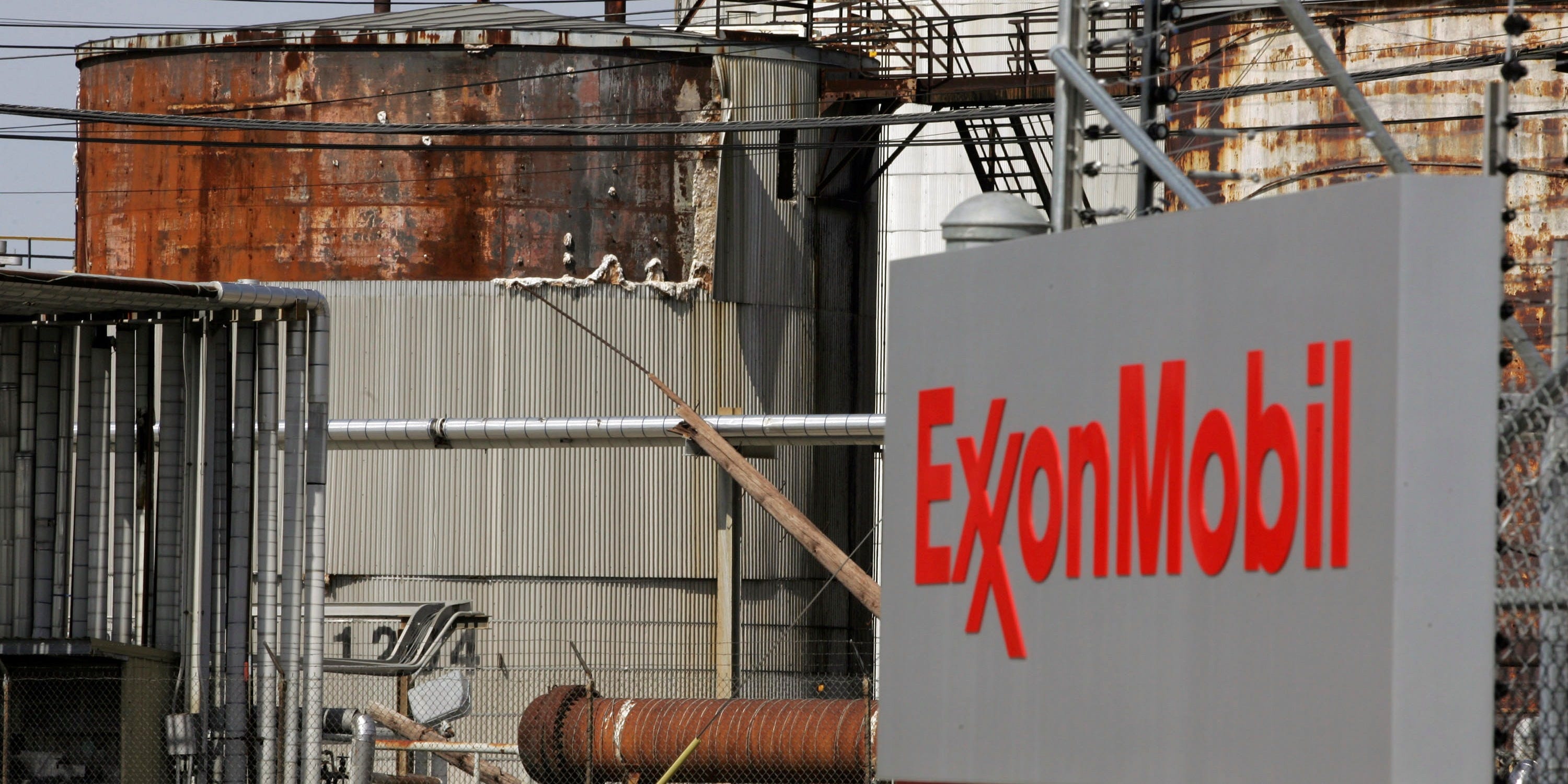 There was some fraud, but not a ton of it, in the PPP program. The SBA watchdog has found about $US300 million in potentially dubious small business loans, out of more than $US500 billion issued. 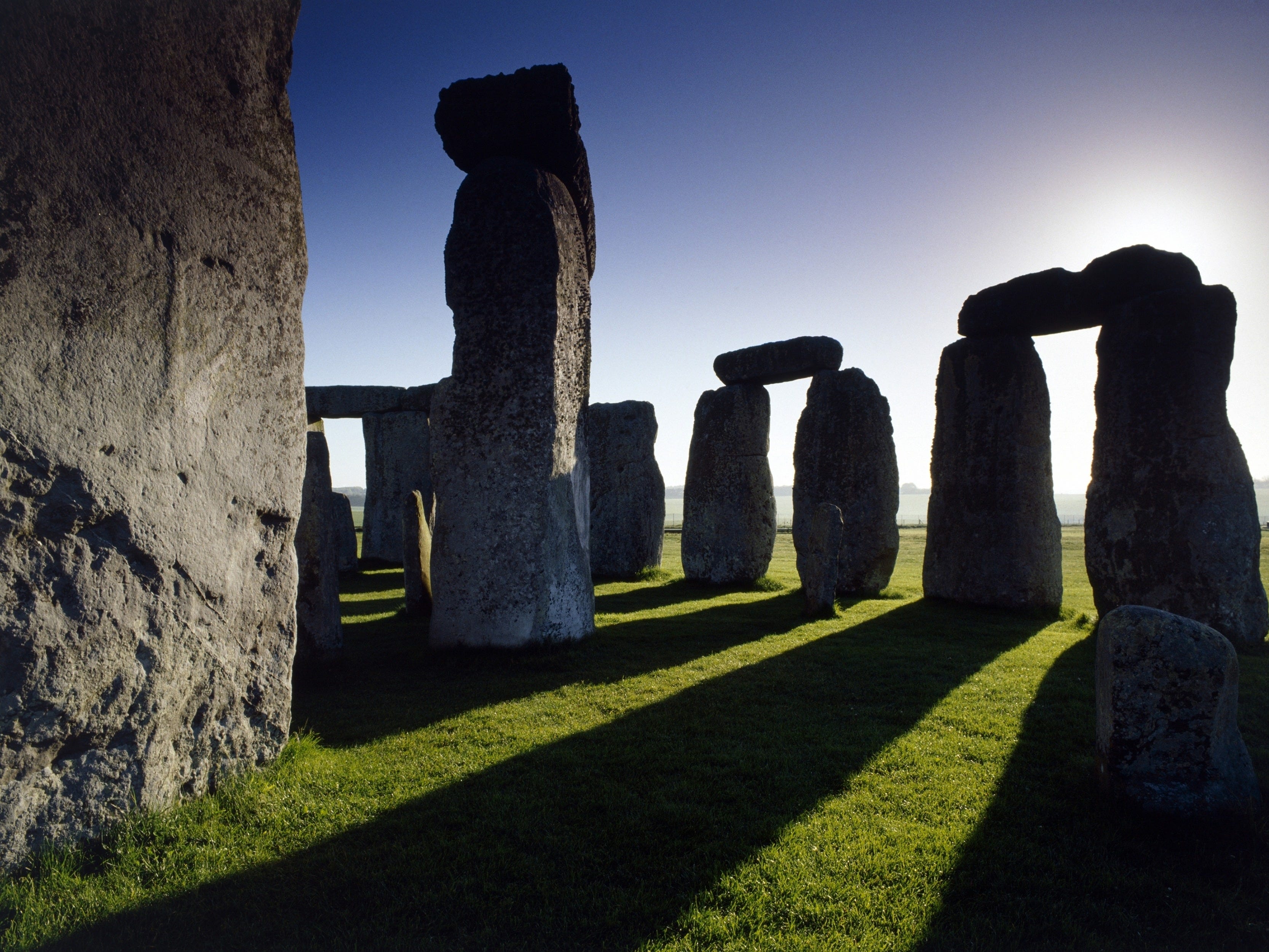 Scientists have finally figured out where the huge stones at Stonehenge came from. The 80 “sarsens,” which weigh 25 tons each, were brought from about 15 miles away, and probably all at the same time.

10 signs your relationship will or won’t work, based on a study of 11,000 couples. Some are obvious: Do you fight a lot? Is your sex life good? Others are less so: Do you appreciate your partner?

LISTEN OF THE DAY

Parents, teachers, and lawmakers are all debating whether or not schools should open their doors this fall for in-person instruction. We joined Insider Audio’s Charlie Herman for a discussion about what it will take to get students back in their seats amidst a pandemic, and what’s at stake if they don’t return. Click here to listen to the full conversation.– HB & DP 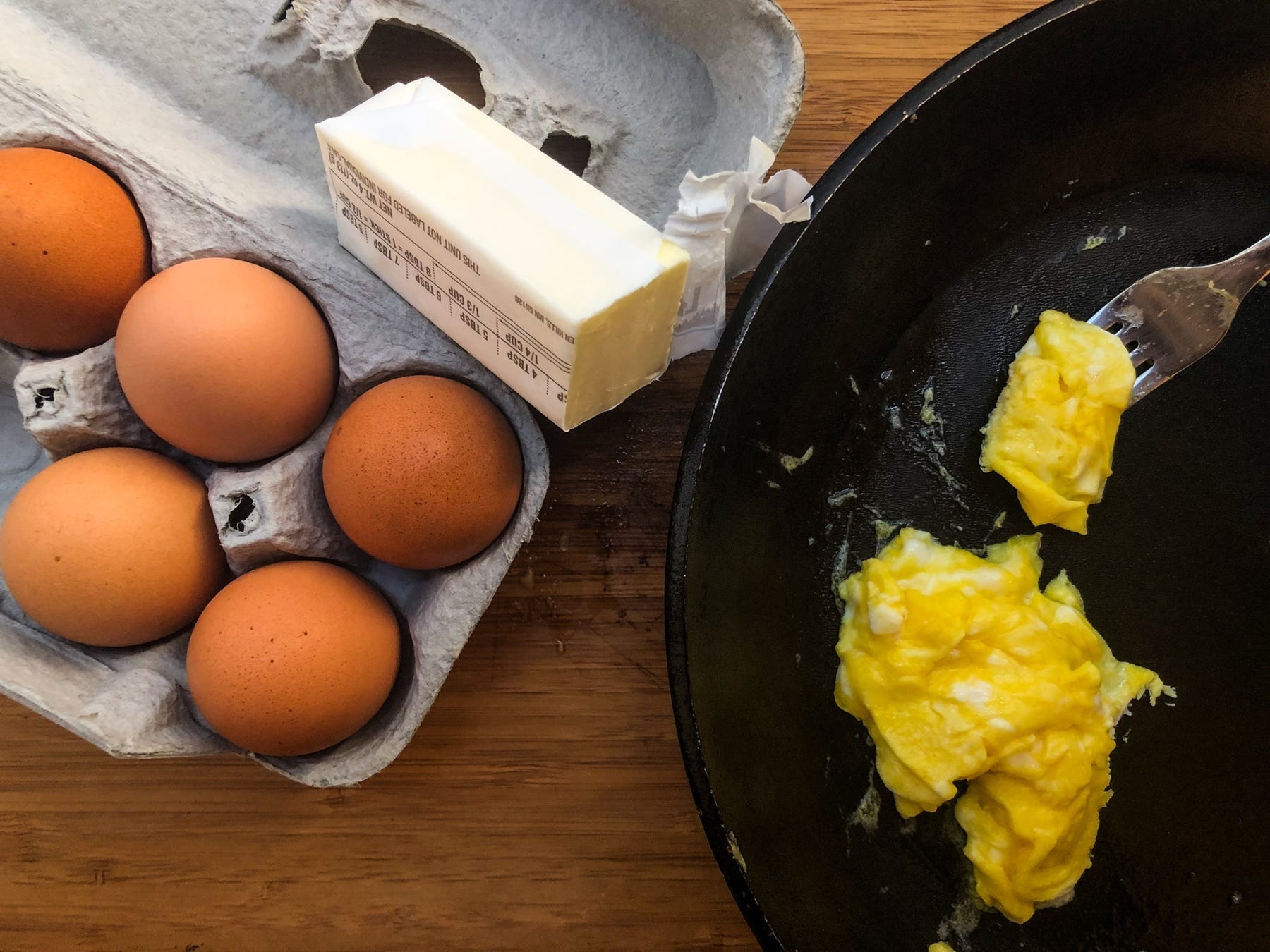 Claudia Conway returned to Twitter. She criticised her mum’s boss, Donald Trump, and joked that AOC should adopt her.

The best and worst things about living in a camper van. Pluses: the great views, the nature, the lack of schedule. Minuses: No showers, no WiFi, never getting to stay in the same place for more than a couple nights.