Drew Angerer/Getty Imagesresident Donald Trump speaks as Secretary of Education Betsy DeVos and Secretary of Agriculture Sonny Perdue look on during a briefing on the coronavirus pandemic in the press briefing room of the White House on March 27, 2020

President Donald Trump once again demanded deferential treatment from America’s governors, telling reporters at a White House briefing on Friday, “I want them to be appreciative.”

Trump has clashed with multiple Democratic governors who have demanded federal aid and medical equipment to help combat the coronavirus.

“I mean, Mike Pence, I don’t think he sleeps anymore,” Trump said. “These are people that should be appreciated. He calls all the governors.”

Trump continued: “You know what I say? If they don’t treat you right, I don’t call,” Trump said, adding that Pence is “a different type of person. He’ll call quietly anyway ok. But he’s done a great job. He should be appreciated for the job he’s done.” 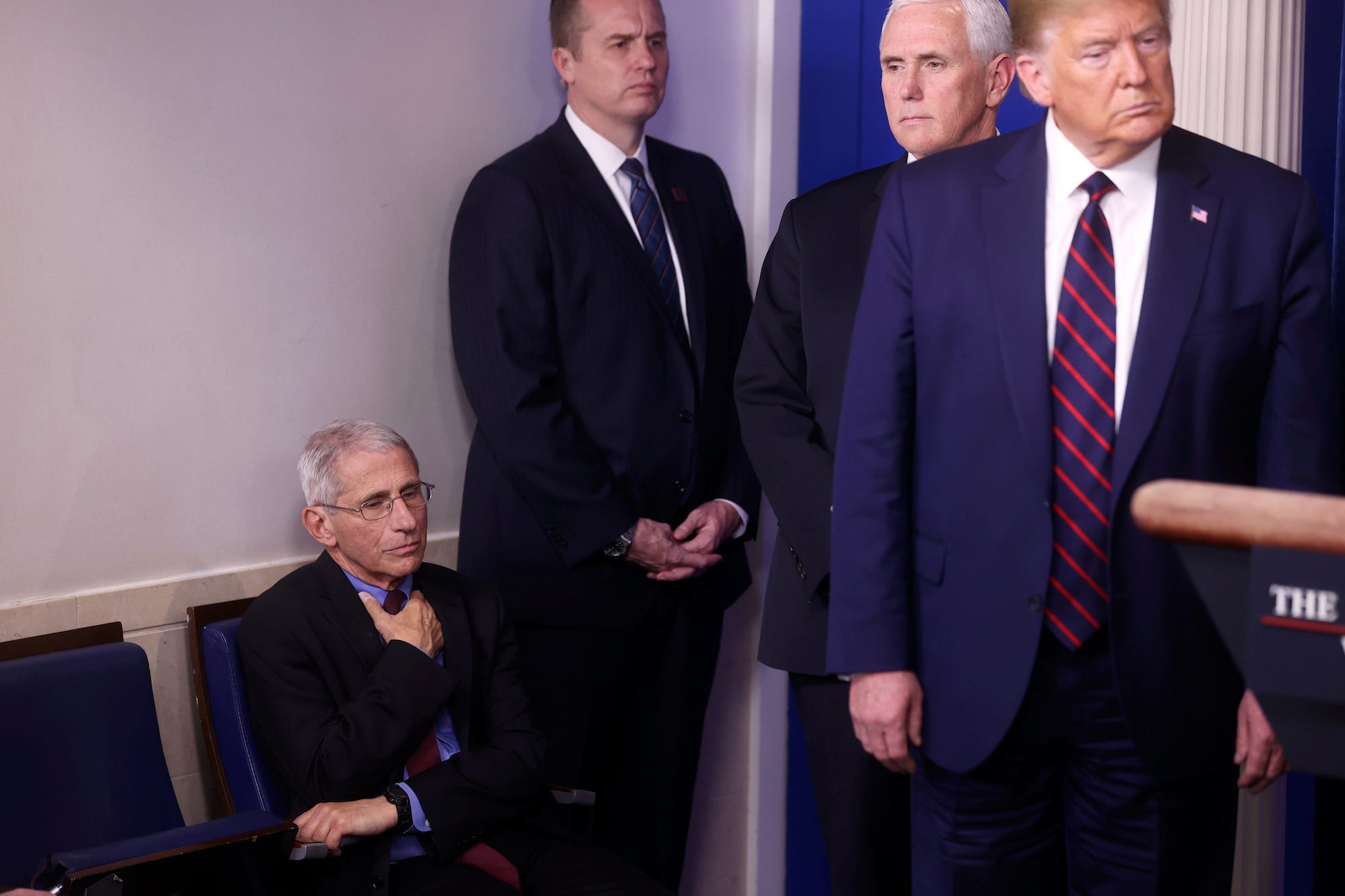 Reuters/Jonathan ErnstDr. Anthony Fauci, director of the National Institute of Allergy and Infectious Diseases sits in a seat along the wall beside a U.S. Secret Service agent as Vice President Mike Pence and U.S. President Donald Trump arrive for the daily coronavirus response briefing at the White House in Washington, U.S., March 27, 2020.

New York Gov. Andrew Cuomo has repeatedly demanded more ventilators and personal protective equipment (PPE). Cuomo has said the state needs at least 30,000 ventilators to handle COVID-19 cases at their peak, a demand that Trump initially chafed at but at Friday’s briefing said he is willing to meet.

At Friday’s briefing, Trump specifically called out Inslee, whom he referred to as a “failed presidential candidate,” and Whitmer, whom he said “has no idea what’s going on.”

Trump also referred to Whitmer simply as “the woman in Michigan.”

“I say, ‘Mike, don’t call the governor of Washington, you’re wasting your time with him.’ ‘Don’t call the woman in Michigan,’ it doesn’t make any difference what happens,” Trump said.

Trump and Whitmer have traded barbs in recent days, as the Detroit area has seen an increase in COVID-19 cases. On Thursday,Trump told Fox News he had a “big problem with the young, a woman governor” from Michigan and said “she’s not stepping up.”

Whitmer hit back in a tweet Thursday night, introducing herself by name.

“I’ve asked repeatedly and respectfully for help,” she tweeted. “We need it. No more political attacks, just PPEs, ventilators, N95 masks, test kits. You said you stand with Michigan – prove it.”

Hi, my name is Gretchen Whitmer, and that governor is me ????

I've asked repeatedly and respectfully for help. We need it. No more political attacks, just PPEs, ventilators, N95 masks, test kits. You said you stand with Michigan — prove it. https://t.co/FtWlTLZdqW

Friday’s briefing was not the first time Trump has implied that his administration’s response to their state was conditional on their treatment of the president and administration.

“It’s a two-way street,” Trump told Fox News on Tuesday of his conversations with governors about aid. “They have to treat us well also. They can’t say, ‘Oh gee, we should get this, we should get that.’ We’re doing a great job.”