Trump’s demand for $2,000 stimulus checks could cost the GOP its Senate majority, but reveals his enduring influence within the party

In his final weeks in office, President Donald Trump has uncharacteristically sided with congressional Democrats and positioned himself against Republicans over his push for bigger COVID-19 stimulus checks. The move could end up vilifying Senate Republicans in the eyes of voters ahead of a crucial runoff election in Georgia that will determine if the GOP maintains its majority in the upper chamber.

After Democratic and Republican leaders passed a long-awaited $US900 billion stimulus package last Monday, Trump put the pandemic-related aid for millions of Americans in limbo for days, with an unexpected plea to bump up direct payments included in the bill from $US600 to $US2,000.

Trump eventually signed the bill on Sunday evening, without any changes, though he continues to tout his demands for the additional relief, which had already been heard loud and clear by Democrats, as he plays golf in Florida.

The Democratic-controlled House passed a standalone bill on Monday that would provide Americans earning up to $US75,000 with a one-time direct payment of $US2,000 instead of $US600.

Senate Democrats on Tuesday urged the upper chamber to follow suit, and called on Republican Senate Majority Leader Mitch McConnell to hold an immediate vote on the bigger checks, to no avail. McConnell blocked the initial measure, but indicated he would consider the proposed relief along with other Trump demands, including removing legal protections for tech companies and investigating voter fraud in the 2020 elections.

Some Senate Republicans are gradually breaking from McConnell 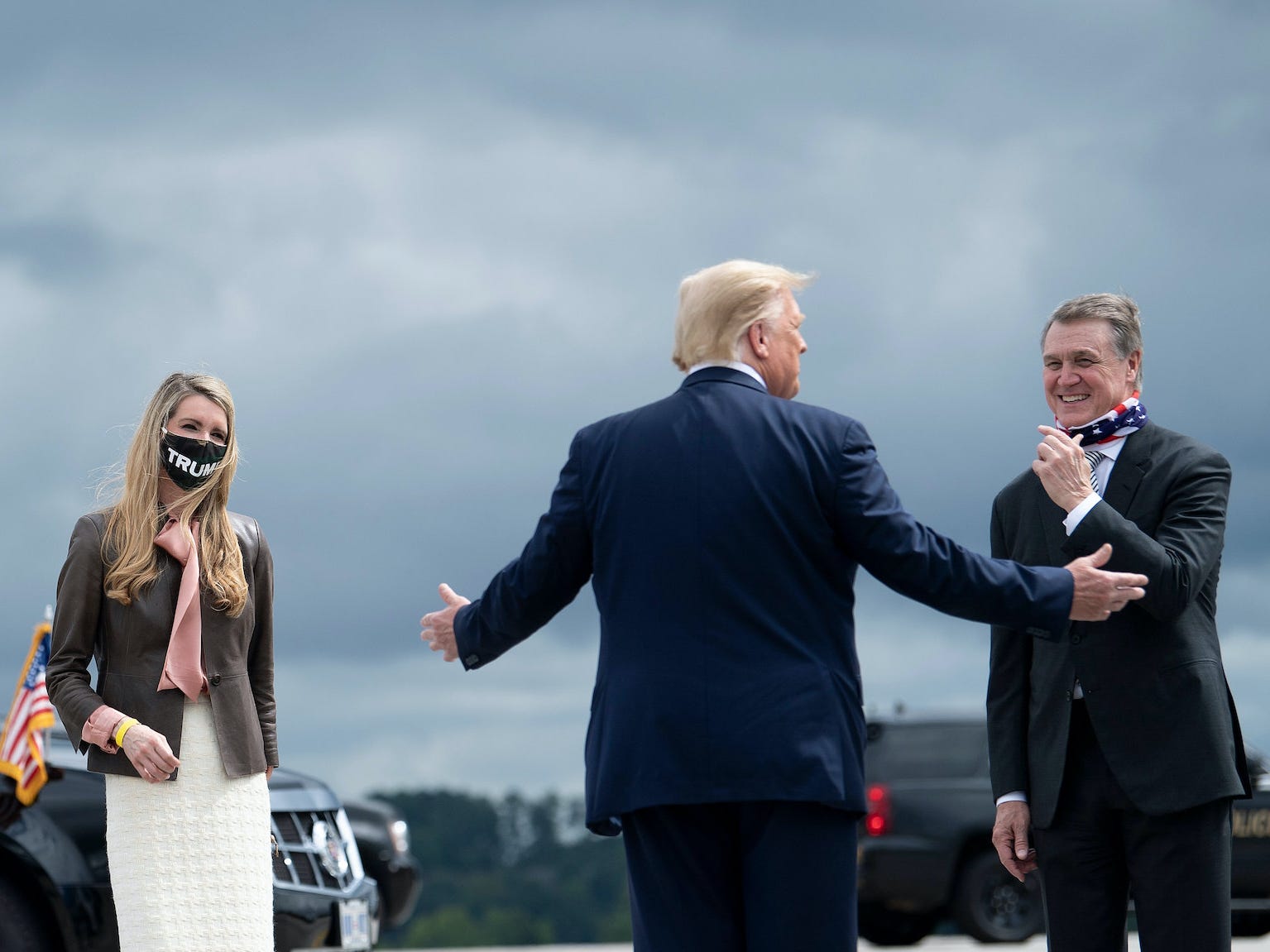 BRENDAN SMIALOWSKI/AFP via Getty ImagesPresident Donald Trump speaking with Sens. David Perdue (right) and Kelly Loeffler (left) in Georgia ahead of a rally.

For months, McConnell has been opposed to raising the legislative price-tag during stimulus talks, and even negotiated to lower direct payments to $US600 from $US1,200 â€” the amount approved as part of the first major COVID-19 economic package.

However, some Republicans are gradually beginning to break from McConnell and back Trump’s calls for $US2,000 checks, signalling the outgoing president’s outsized, ongoing influence within his party and on the nation’s politics more broadly.

Two Republicans who’ve shown support for bigger checks include Georgia Sens. Kelly Loeffler and David Perdue, both of whom are facing tough reelection fights in the hopes of maintaining the Republican majority in the Senate, which will be decided in runoff races on January 5.

Loeffler and Perdue had tiptoed around the subject up until Tuesday, when they both rallied behind the $US2,000 checks, suggesting the path to winning in Georgia is through defending Trump.

“The president has fought for our country from day one,” Loeffler told Fox News on Tuesday. “He continues to fight for every single American. I’ve stood by the president 100% of the time. I’m proud to do that. And I’ve said absolutely we need to get relief to Americans now, and I will support that.”

Trump has put McConnell in an uncomfortable position, and provided Democrats with a huge opportunity

McConnell’s obstinance on the $US2,000 checks has offered Democrats an ideal messaging opportunity ahead of Georgia’s Senate runoff election. And by supporting the bigger checks, Trump has put McConnell between rock and a hard place.

Many economists have argued that additional aid to Americans can offer a boost to the US economic recovery, after the coronavirus pandemic forced millions of people out of their jobs and with unemployment claims still rising each week. Similarly, most Americans are hugely in favour of stimulus checks and prefer a bigger size, according to a recent poll conducted by Insider, which showed that both Democrats and Republicans overwhelmingly support direct payments worth more than $US600.

The GOP leader is denying more assistance to Americans at a time when they’re desperately in need, and defying a president who is extremely popular with Republican voters â€” a week before an election that will determine if he remains at the helm of the Senate.

Senate Democrats slammed the GOP for resisting sending more money to Americans while unequivocally embracing $US741 billion for the National Defence Authorization Act, an annual spending bill passed by the House and Senate earlier this month.

Trump vetoed the must-pass national security legislation last week because it didn’t include an unrelated provision that would hold social media companies accountable for what he describes as anti-conservative biases on their platforms.

The House voted on Monday to override the president’s veto of the defence bill that keeps the military funded, and McConnell aims to do the same in the Senate.

Sen. Bernie Sanders of Vermont, an independent who caucuses with Democrats and has been leading the charge for the $US2,000 checks, ripped into McConnell’s refusal to hold an immediate vote on the payments and responded by objecting to a fast-track vote that would override Trump’s veto of the annual defence bill.

“Do we turn our backs on struggling working families or do we respond to their pain?” Sanders said on Tuesday.

“Now it is time for the Senate to step up to the plate and do what the working families of this country overwhelmingly want us to do.” pic.twitter.com/nvbee22cWO

Likewise, Sen. Chris Murphy of Connecticut excoriated Republicans for expressing concern about the national deficit in relation to calls for fatter stimulus checks, a core GOP talking point that has been used to justify smaller direct payments.

“Frankly, spare me the fake righteous indignation about the deficit all of a sudden. Three years ago these same deficit hawk Republicans passed a tax cut bill that before the pandemic hit had already added over $US200 billion to the annual deficit,” Murphy said. “And that was a tax cut where 80% of the benefits went to the richest 1% of Americans.”

‘Which side are they on right now?’

As he shut down votes on the $US2,000 checks on Tuesday, McConnell noted that the Senate would consider looking into bigger payments, but in concert with Trump’s additional demands on social media and voter fraud.

“Those are the three important subjects the President has linked together,” the GOP leader said. “This week the Senate will begin a process to bring these three priorities into focus.”

Yet packaging the issues together could effectively sink the effort for $US2,000 checks, as it remains unlikely Democrats would agree to it alongside other terms initially put forth by Trump.

“The House passed, to their credit, a simple, straightforward bill. Let’s not muddy the waters,” Sanders told reporters on Capitol Hill on Tuesday. “Are you for $US2,000, or are you not? Let’s not talk about so-called voter fraud or abortion or anything else. That’s what the American people want to know: Which side are they on right now?