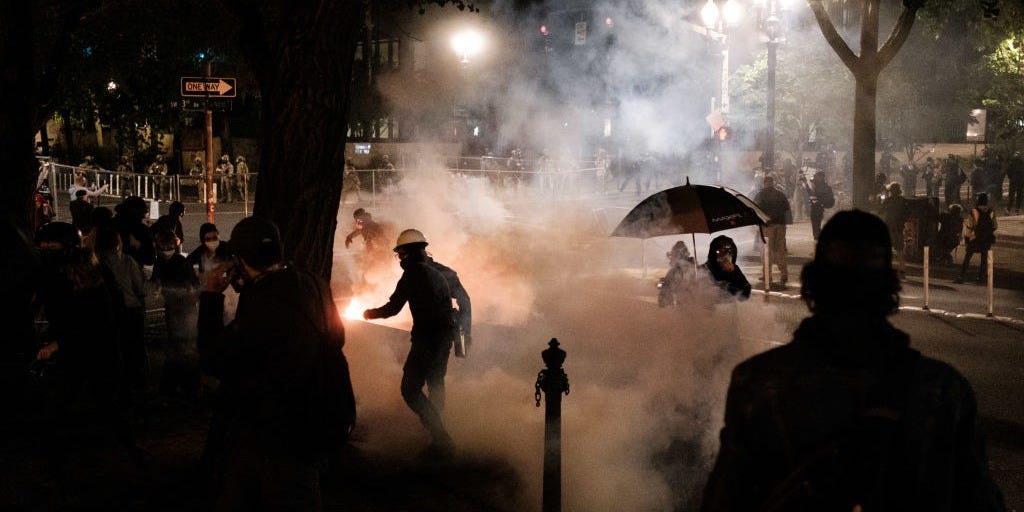 Mason Trinca/Getty ImagesFederal officers use tear gas and other crowd dispersal munitions on protesters outside the Multnomah County Justice Centre on July 17, 2020 in Portland, Oregon.

The city has seen nightly demonstrations against racism and police brutality since George Floyd’s death in Minneapolis police custody on May 25.

Oregon Public Broadcasting reported last week that federal law enforcement officers had detained protesters off the street with no explanation as to why they were being arrested as part of a federal directive to protect public property.

Trump responded to the backlash on Sunday, tweeting that the administration was “trying to help Portland” by seeking to protect “federal property” and people.

“We are trying to help Portland, not hurt it,” Trump wrote. “Their leadership has, for months, lost control of the anarchists and agitators. They are missing in action. We must protect Federal property, AND OUR PEOPLE. These were not merely protesters, these are the real deal!”

In the tweet, Trump echoed a statement from Acting DHS Secretary Chad Wolf issued July 16 that claimed the federal deployment was a response to the city that was “under siege” by “a violent mob while local political leaders refuse to restore order to protect their city.”

The statement details violent clashes between demonstrators and authorities that occurred between May 29 and July 15, referring to “violent anarchists” 72 times, Insider’s Charles Davis reported.

“This could happen in your city,” Wheeler said. “What we’re seeing is a blatant abuse of police tactics by the federal government, by a Trump administration that’s falling in the polls. And this is a direct threat to our democracy.”