Trump got Regeneron's experimental antibody drug for his coronavirus symptoms. Here's what you need to know about the treatment. 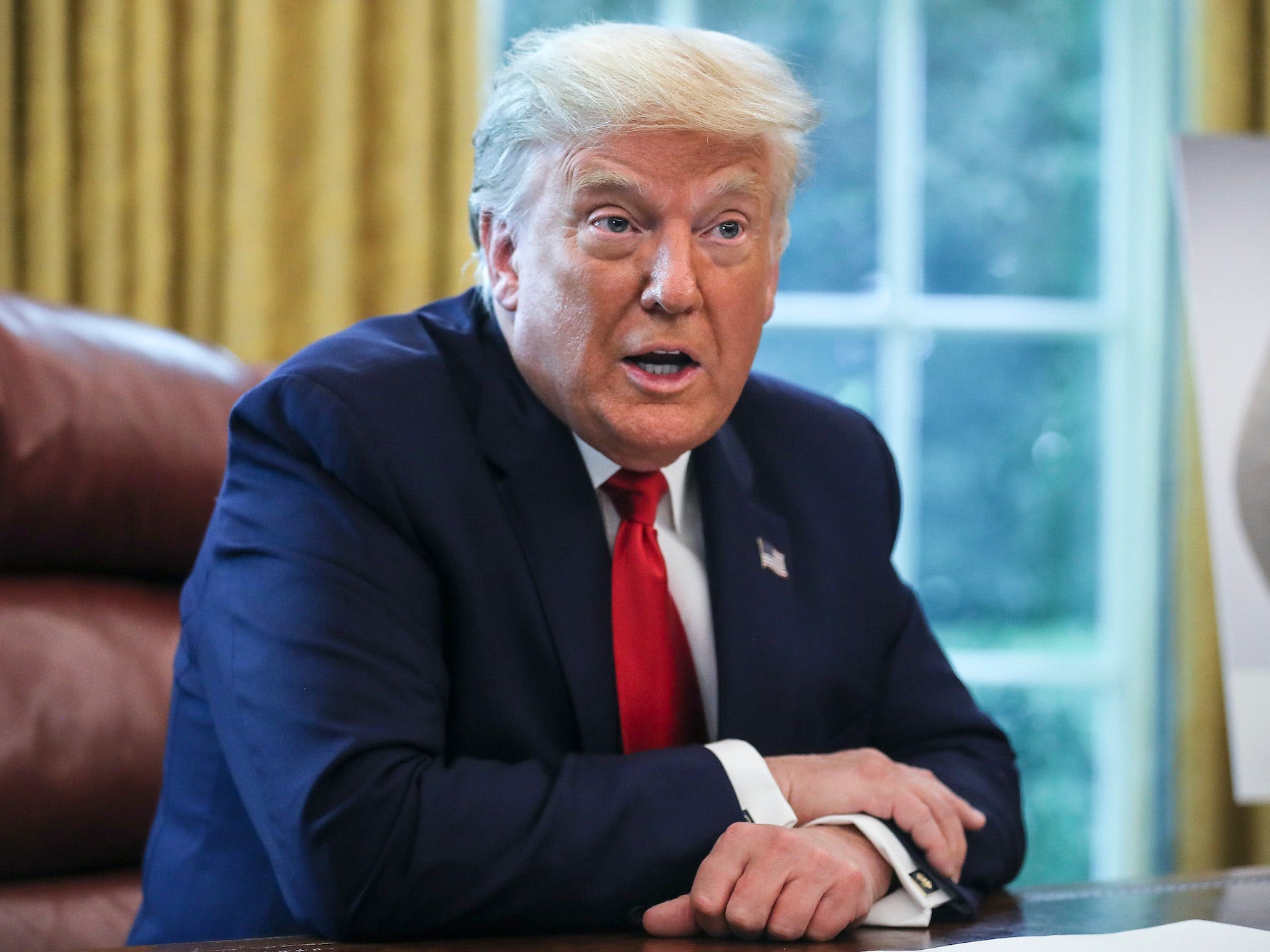 Oliver Contreras-Pool/GettyPresident Donald Trump in the Oval Office on September 17.

On Friday, the president said he and first lady Melania Trump tested positive for the virus and began isolating. The White House said the president was fatigued, and The New York Times reported that he had mild coldlike symptoms.

Trump, 74, is at an increased risk for a more serious case of COVID-19 because of his age, weight, and sex. On Friday evening, he was headed to Walter Reed National Military Medical Centre, where he plans to stay for several days. White House press secretary Kayleigh McEnany said the decision was made “out of an abundance of caution.”

In a memo released Friday, White House physician Sean Conley said Trump had received an injection of 8 grams of Regeneron’s drug, which is a combination of two antibodies and called REGN-COV2. Antibodies are disease-fighting proteins that the body makes to fight off infection.

Dr. Taison Bell, a critical-care physician at the University of Virginia medical centre trained in infectious diseases, told Business Insider that giving the drug to Trump was a reasonable decision, given the lack of drugs that work as early treatments.

“There’s been a real thirst for agents we can use on people who are relatively well but high risk to prevent them from getting sick,” Bell said. “I think it does make sense. Obviously it needs to be studied more, but it is one of these agents that we do have some hope for.”

Regeneron, a New York biotech firm, started clinical trials on June 11 for the experimental treatment and recently reported some promising signs that the treatment could help people’s immune systems fight the virus and reduce the chance of hospitalisation.

The physician’s statement said Trump “remains fatigued but is in good spirits.” Conley added that the president has also been taking zinc, vitamin D, famotidine, melatonin, and a daily aspirin.

Later on Friday, Conley said Trump had started treatment with remdesivir, a coronavirus treament made by Gilead Sciences. Study results have shown that the drug can help hospitalized patients with COVID-19 recover faster than those receiving a placebo, and the treatment has received an emergency use authorization from the US Food and Drug Administration.

Regeneron’s drug is still in clinical trials and is not approved by the FDA. On September 29, the company released a description of early results from the first 275 volunteers in the study. The company was testing the drug in patients who weren’t sick enough to be hospitalized.

Giving the drug to the president relatively early in the course of his infection may be helpful, because there’s some evidence that it can help the body stop COVID-19 from getting worse.

“In early disease, treating the virus may be more beneficial because you stop the virus from reproducing, which doesn’t make the body as angry,” said Dr. Peter Chin-Hong, an infectious disease specialist at UCSF.

“You can stun the virus into submission because it creates that immune response. Time is money with antibodies and early disease is the best place to get it,” he added.


Read more:
We’re getting a slew of promising data on a new kind of coronavirus drug. Here are the 9 top drugmakers racing to develop antibody treatments for COVID-19.

In a statement, Regeneron said it provided the experimental drug to Trump’s doctor under a compassionate-use request, which allows sick people access to treatments that aren’t approved.

Dr. Mangala Narasimhan, an intensive care doctor who oversees ICU care at Northwell Health, said that it’s “not unreasonable” for Trump to receive the drug, though she pointed out that the drug hasn’t been proven to work yet.

“This is what I thought was going to happen,” she said. “They were looking for something to treat him with, and this supposedly has good results.”

How an antibody drug works, in theory

To develop antibody therapies like REGN-COV2, scientists study the body’s response to the coronavirus.

In response to detecting an invading threat, the human body’s immune system produces virus-fighting proteins called antibodies. In this case, that invader is the coronavirus, which infects cells and hijacks them to produce more of the virus.

Our bodies pump out tons of customised antibodies to fight back and stop the virus. To make a therapeutic, scientists first collect a large pool of antibodies to sort through, hunting for the most potent in fighting the coronavirus. These often come from blood donations from recovered COVID-19 patients or from testing animals.

When scientists have found the best antibodies, biotechnology allows them to clone and produce them at massive scale.

It’s a more modern version of using convalescent plasma, or the blood of sick patients, to treat COVID-19 patients. In that case,donated plasma full of antibodies is injected into sick patients. The approach requires lots of recovered blood donors â€” making it difficult to scale â€” and has not yet been proved effective for this pandemic, despite securing an emergency approval from the FDA.

The technology to design and mass-produce antibody drugs has greatly improved over the past 30 years, allowing many companies to pursue this research.

What’s been working to treat COVID-19


Read more:
The 10 most promising coronavirus treatments that could help curb the pandemic, even without a vaccine

The FDA has given emergency-use authorization to two coronavirus treatments: the antiviral remdesivir and convalescent plasma.

Others, including the steroid dexamethasone, have shown promise in patients with acute infections.

Throughout March and April, Trump consistently touted the prospects of hydroxychloroquine by name.

Early studies from France and China encouraged many doctors, as well as Trump, by appearing to show promising signs that the drug worked. The FDA issued an emergency approval to treat hospitalized patients in late March. A top-ranking government official later said there was political pressure put on the agency to green-light the drug.

These initial findings were severely flawed by the limitations of the studies. The trials enrolled tiny groups of patients or lacked a control group to compare the results against. Studies that enrolled more people and tested the pills against a placebo group consistently found no benefit for hydroxychloroquine.

These negative trial results, which have been published in top peer-reviewed medicaljournals, found hydroxychloroquine didn’t prevent COVID-19 in people exposed to the virus, nor did it help hospitalized patients recover faster.

In June, the FDA revoked the emergency-use authorization for hydroxychloroquine and chloroquine. In its statement explaining the reversal, the FDA noted serious heart-related side effects the treatment could cause. The agency concluded those risks did not outweigh any potential benefits in treating COVID-19.


Read more:
A spate of advancements suggest new coronavirus treatments could be on the horizon â€” here’s the latest

This article was published on October 2. It was updated on October 3 to include Trump’s treatment with remdesivir.