Trump's dark shift in tone on the coronavirus came after new data projected up to 240,000 US deaths and a stalwart ally savaged his response 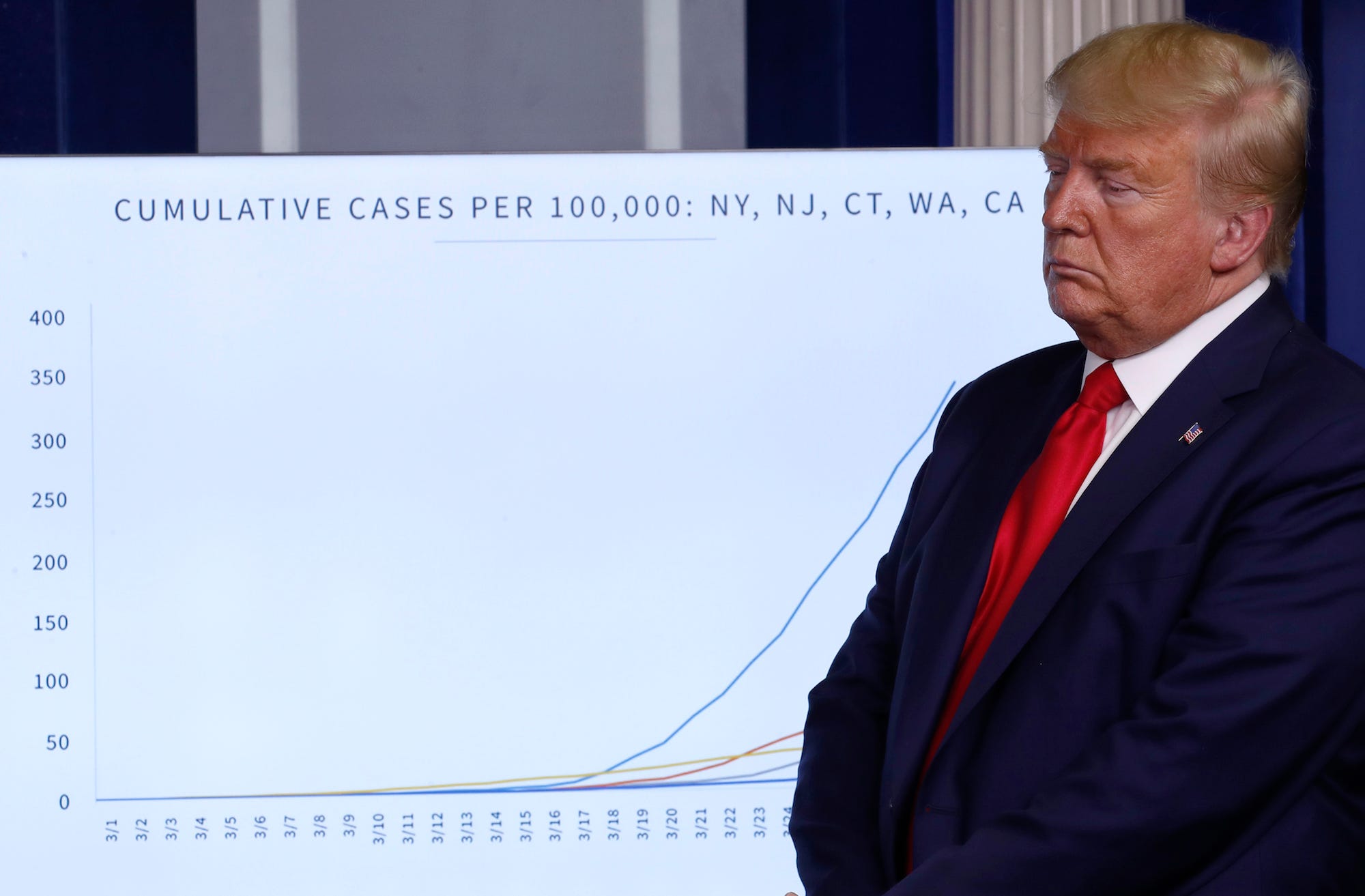 In another abrupt shift of tone, President Donald Trump on Tuesday delivered his most somber assessment of the coronavirus crisis yet, warning that Americans faced a “very difficult” two weeks ahead as the death toll mounted.

The president’s seriousness coincided with new projections, presented at Tuesday’s briefing, suggesting that 240,000 Americans could die of the COVID-19 even with strict social-distancing measures in place. Without such measures, that number rose past 2 million.

Trump’s dark shift in tone also came a day after a staunch media ally broke with him and criticised his response to the crisis.

At Monday’s coronavirus briefing, Trump had made unfounded claims about COVID-19, touted unproven drugs, and handed the podium to a pillow-company executive who effusively praised his actions.

Hospitals “don’t have the supplies they need,” he said. “So don’t give me the My Pillow guy doing a song and dance up here on a Monday afternoon when people are dying in Queens! Get the stuff made! Get the stuff where it needs to go and get the boots on the ground. Treat this like the crisis it is.”

“Don’t give me the MyPillow guy doing a song and dance… when people are dying in Queens.”https://t.co/QeVvSyTTfx

If Francesa’s remarks were also playing on Trump’s mind, it wouldn’t be the first time the remarks of a media ally had influenced the notoriously optics-obsessed president’s response to the crisis.

Trump began to take the coronavirus crisis seriously only in mid-March – after seeing the Fox News host Tucker Carlson break with his colleagues to deliver a grim warning about the likely devastation of the pandemic, The Washington Post reported last month.

Trump’s decision to push two drugs unproven to treat COVID-19 – chloroquine and hydroxychloroquine – may also have been influenced by seeing Fox News hosts claiming they may be effective to do so.

Previously, Trump had played down the likely impact of the virus, comparing it to the common flu, and hosts on the network had echoed the president’s complacent tone.

On Tuesday, both The New York Times and The Post reported that Trump’s public messaging was being guided not just by the advice of top US public-health experts but by polls and data indicating that plans to prematurely lift lockdown measures could dent his chances of reelection in November. Tom Brenner/ReutersTrump with Dr. Anthony Fauci, the director of the National Institute of Allergy and Infectious Diseases, at Tuesday’s coronavirus press briefing.

Trump has made no secret of his obsession with popular opinion about him, even as hundreds of people in the US and worldwide are lost daily to the disease.

On Sunday he tweeted a quote from a New York Times column that compared the ratings of his coronavirus press briefings to ratings for reality show “The Bachelor. “

“President Trump is a ratings hit. Since reviving the daily White House briefing Mr. Trump and his coronavirus updates have attracted an average audience of 8.5 million on cable news, roughly the viewership of the season finale of ‘The Bachelor.’ Numbers are continuing to rise…” the message said.

Throughout his career Trump has maintained an obsessive focus on his public profile, with his fame prior to his 2016 election peaking during his stint as host of “The Apprentice.”

And even during America’s most urgent public-health crisis in decades, it’s an obsession apparently continuing to drive the president’s decisions and messages.