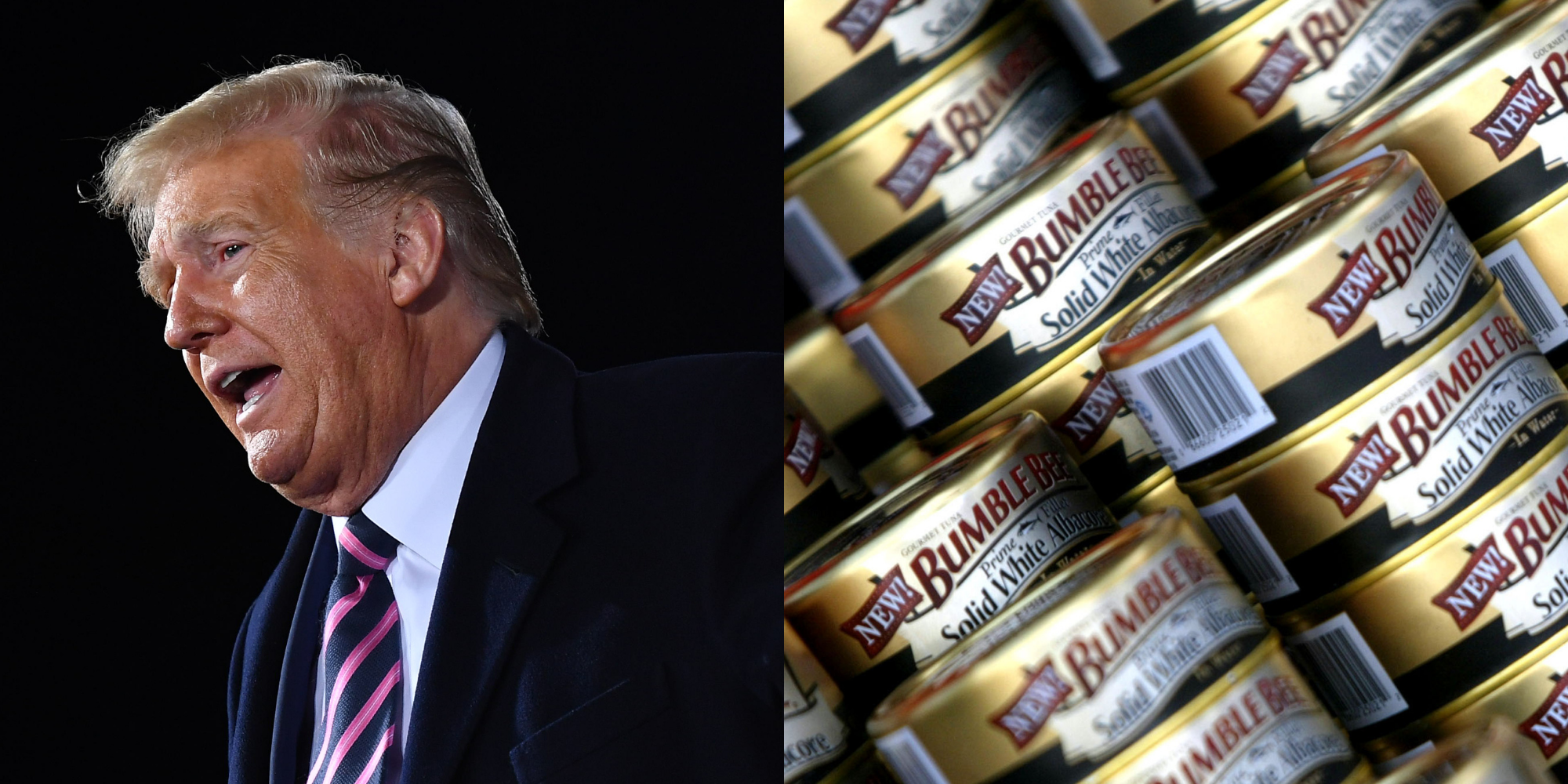 President Donald Trump made a bizarre claim Tuesday, without evidence, that protesters against police brutality in Minnesota and Chicago threw cans of “tuna fish and soup” at law enforcement officers.

At his campaign rally in Moon Township, Pennsylvania, Trump alleged that protesters in Minnesota and Chicago had wielded cans, specifically the brands Goya Foods and Bumble Bee Seafoods.

The Portland Police Department tweeted an image of projectiles allegedly thrown by protesters, which included a can of garbanzo beans. According to Snopes, the Portland police also said in a court filing that soup cans were thrown.

“Eat em. Don’t throw em,” Bumble Bee tweeted Tuesday in response to the remarks. Goya did not respond to a request for comment.

Trump also claimed that police officers in Chicago were “not allowed to fight back” but had to dodge the alleged cans.

A Chicago Police Department directive from February said officers “may only use force that is objectively reasonable, necessary, and proportional, under the totality of the circumstances, in order to ensure the safety of a member or third person, stop an attack, make an arrest, control a subject, or prevent escape.”

However, CPD officers were ordered in May to “no longer use force to disperse large gatherings,” according to CBS Chicago, after facing criticism for using aggressive tactics against anti-police-brutality protesters as demonstrations swept the nation in the wake of George Floyd’s death.

In June, 56% of the 371 complaints filed against CPD officers for their response to the protests alleged excessive force, according to the department’s internal affairs and the city’s civilian-run police accountability office, WTTW reported.

Under the Trump administration, federal law enforcement officers have also at times used aggressive and controversial tactics, such as deploying tear gas, pepper spray, and rubber bullets against peaceful protesters as well as using unmarked vans to detain protesters without explanation.

Trump has frequently used his rallies to make false or misleading claims about protesters and the demonstrations â€” which have often been peaceful but at times have turned violent â€” and used the unrest to sell himself to voters as the “law and order” candidate.

Citing Minneapolis officials’ pledge to make major changes to the city’s police department, such as reallocating funding and jobs to other social service programs, Trump said: “that’s why I’m going to win the state of Minnesota.”

During Tuesday’s rally, Trump also called violence against reporters “a beautiful sight,” according to Vox journalist Aaron Rupar. Trump also made racially charged remarks about Rep. Ilhan Omar, criticising the governance of Somalia, which Omar fled as a refuge at age 8, becoming a US citizen in 2000, The Hill reported.