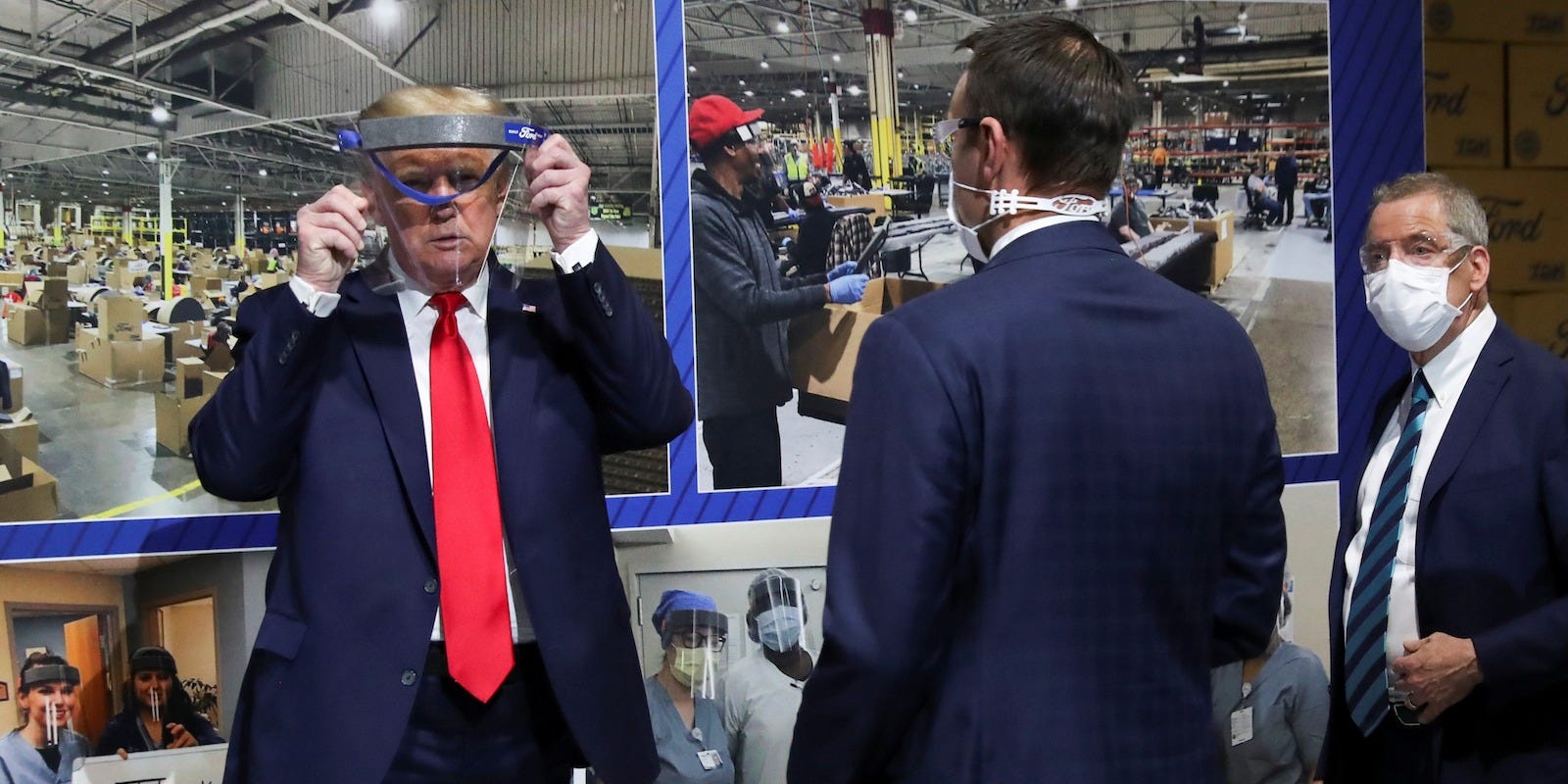 Leah Millis/ReutersPresident Donald Trump during a tour of the Ford Rawsonville Components Plant in Ypsilanti, Michigan.

President Donald Trump was photographed not wearing a mask while touring a Ford manufacturing plant in Michigan despite being told by the Michigan attorney general that he had a “legal responsibility” to wear one.

Ford also told reporters on Tuesday it has a policy requiring masks to be worn at the plant and that it had informed the White House of the policy.

In a statement after Trump’s visit, Ford said: “Bill Ford encouraged President Trump to wear a mask when he arrived. He wore a mask during a private viewing of three Ford GTs from over the years. The President later removed the mask for the remainder of the visit.”

Trump wore a mask for a while as he toured part of the plant but said didn’t want to wear one while he was around the press.

“I did wear one. I had it on before; I wore one on in this back area,” the president said. “But I didn’t want to give the press the pleasure of seeing it. I had it in the back area. I did put a mask on.”

REPORTER: Can you explain why you decided not to wear a mask?

TRUMP: "Well I did wear — I had one on before. I wore one in this back area. But I didn't want to give the press the pleasure of seeing it."

R: But the executives are wearing them.

The president added that he was “given a choice” and “had one on in an area where they preferred it, so I put it on and it was very nice; it looked very nice. But they said it’s not necessary.”

“What about the example it would set for other Americans?” a reporter asked.

“I think it sets an example both ways, and like I said, I did have it on,” Trump replied.

Michigan Attorney General Dana Nessel said on Wednesday that she wouldn’t block Trump’s plan to visit the Ford plant but added, “I ask that while you are on tour, you respect the great efforts of the men and women at Ford – and across this state – by wearing a facial covering.”

Trump made the visit despite an executive order from Michigan Gov. Gretchen Whitmer that bans nonessential visits to manufacturing facilities in the state to curb the spread of the novel coronavirus.

Trump and Vice President Mike Pence have both drawn sharp backlash for not following the White House’s own directive to wear masks when going out in public.

Pence made headlines earlier this month when he violated the Mayo Clinic’s policy by not wearing a mask while visiting patients at the hospital.

The Mayo Clinic tweeted but then deleted a message that it “informed” Pence about its face-mask policy before his visit.

Politico’s Dan Diamond also said a Mayo Clinic representative explained that it had communicated the policy to Pence and his staff.

Trump, meanwhile, has never worn a mask in public and has been quoted as saying that wearing one would “send the wrong message.”

He was criticised earlier this month for failing to wear one while visiting a Honeywell plant in Arizona, and The Associated Press reported that the president didn’t want to wear a mask because he’s afraid he’d look ridiculous and it would harm his reelection chances.