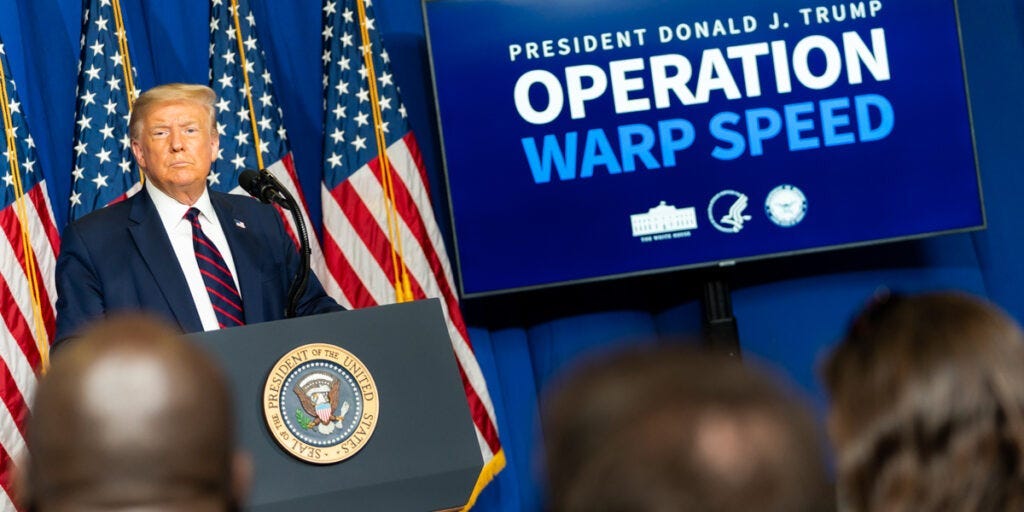 President Donald Trump and Vice President Mike Pence celebrated and appeared to take credit for Pfizer’s COVID-19 vaccine success on Monday, though the federal government did not fund the vaccine’s research and development.

Pfizer announced that its drug was found to be more than 90% effective in preventing COVID-19, marking one of the most major and positive developments yet in the fight against the pandemic.

Similarly, Pence tweeted: “HUGE NEWS: Thanks to the public-private partnership forged by President @realDonaldTrump, @pfizer announced its Coronavirus Vaccine trial is EFFECTIVE, preventing infection in 90% of its volunteers.”

Pfizer first pushed against the notion that it worked with the Trump administration, and sought to present itself as separate from Operation Warp Speed, the government’s initiative to accelerate the development and distribution of a vaccine.

“We were never part of the Warp Speed,” Kathrin Jansen, a senior vice president and the head of vaccine research and development at Pfizer, told The New York Times. “We have never taken any money from the U.S. government, or from anyone.”

Pfizer CEO Albert Bourla in September told CBS News’ Margaret Brennan that the company was taking somewhat of a risk by not taking taxpayer money to help with the vaccine, but that it wouldn’t “break” the pharmaceutical giant.

“I wanted to liberate our scientists from any bureaucracy,” Bourla said. “When you get money from someone, that always comes with strings. They want to see how we are growing to progress, what types of moves you are going to do. They want reports. I didn’t want to have any of that.”

That said, however, the US government over the summer did place an initial $US1.95 billion order with Pfizer for 100 million doses, which will be given to Americans for free.

“Expanding Operation Warp Speed’s diverse portfolio by adding a vaccine from Pfizer and BioNTech increases the odds that we will have a safe, effective vaccine as soon as the end of this year,” Health and Human Services Secretary Alex Azar said in late July. “Depending on success in clinical trials, today’s agreement will enable the delivery of approximately 100 million doses of this vaccine to the American people.”

Pfizer later on Monday said that it was a participant in Warp Speed, noting the advance purchase agreement, but maintained that it did not receive government funding for research and development of the vaccine.

Pfizer now says it *is* a participant in Warp Speed. Spokesperson notes its significant purchase agreement with the US government.

Pfizer's head of vaccine development had told NYT it wasn't part of Warp Speed because it didn't take research $, but that's not the whole story. pic.twitter.com/6J3FsoRX4a

The Pfizer vaccine will not immediately be distributed as it must still be evaluated by the Food and Drug Administration.

In the months leading up to the election, Trump repeatedly stated that a vaccine would be ready by November 3.

In late October, when it became clear that a vaccine was not going to be imminently available, White House strategic communications director Alyssa Farah told reporters that the president’s Election Day deadline had been “arbitrary.”

Trump lost the election to President-elect Joe Biden. In response to Pfizer’s big announcement on Monday, Biden declared the development “excellent news” but urged Americans to continue wearing masks to mitigate the spread of COVID-19 before widespread vaccination is possible.