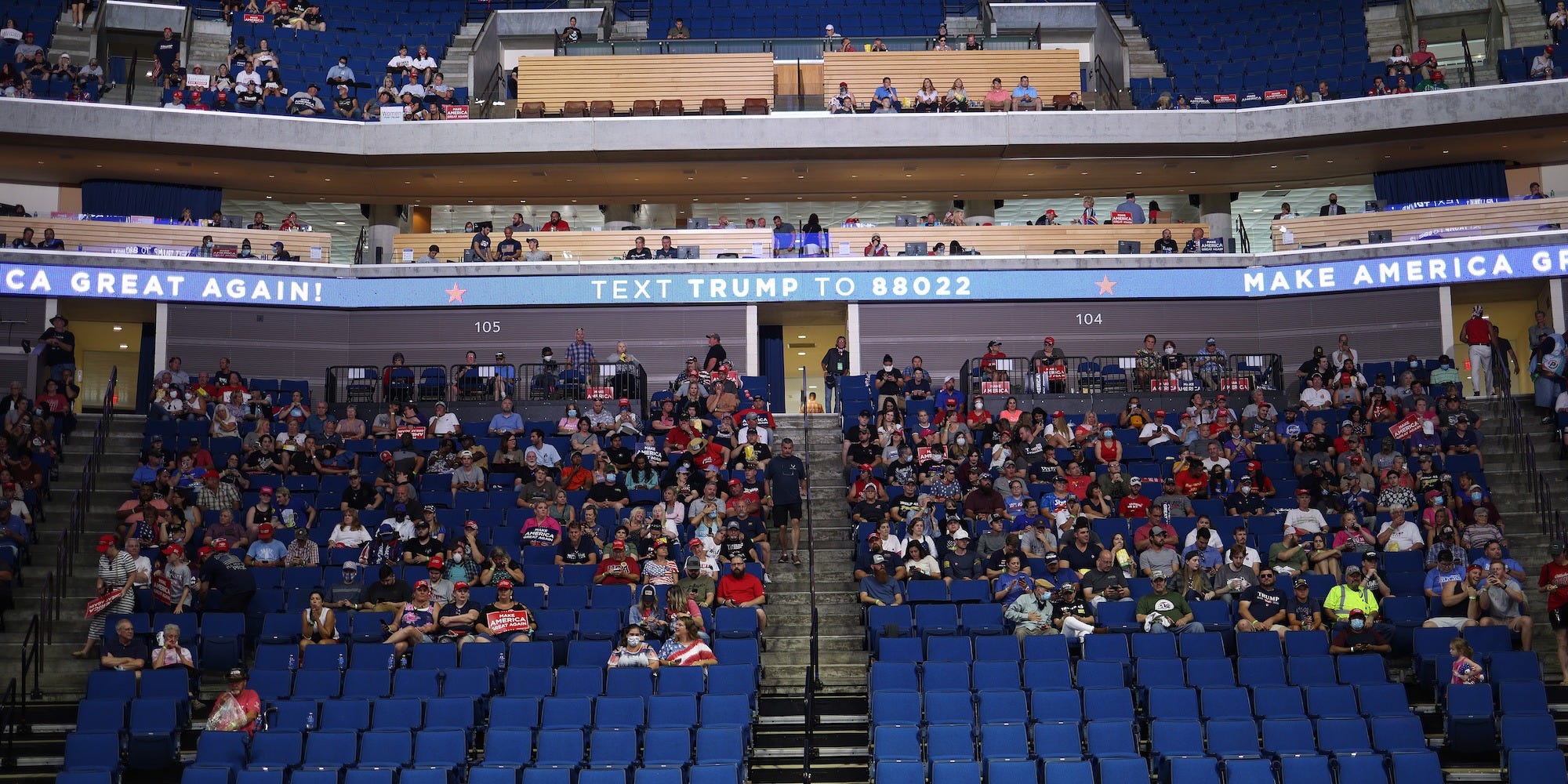 Win McNamee/Getty Image: Supporters wait for the start of a campaign rally for U.S. President Donald Trump at the BOK Centre, June 20, 2020 in Tulsa, Oklahoma. Trump is holding his first political rally since the start of the coronavirus pandemic at the BOK Centre on Saturday while infection rates in the state of Oklahoma continue to rise.

President Donald Trump cancelled a planned speech to the overflow crowd outside the arena at his Saturday night rally in Tulsa, Oklahoma after only dozens of people appeared to show up.

Both Trump and Vice President Mike Pence were set to speak to a planned overflow crowd outside Tulsa’s BOK Centre. Members of the media at the event reported that the crowd inside the arena was sizeable but still far smaller than expected.

Trump’s campaign boasted that over a million people had requested tickets to the rally. But photos and videos on the ground showed that many sections were empty.

“President Trump is rallying in Tulsa with thousands of energetic supporters, a stark contrast to the sleepy campaign being run by Joe Biden from his basement in Delaware,” Trump campaign spokesman Tim Murtagh said in a statement.

He further claimed that “radical protestors, coupled with a relentless onslaught from the media, attempted to frighten off the President’s supporters, adding, “we are proud of the thousands who stuck it out.”

This is what overflow looks like at the Trump rally in Tulsa right now. Pence is scheduled to speak out here in about 10 minutes. People still streaming in but not nearly the number the campaign said they were expecting. pic.twitter.com/hbypfviOxv

As others are reporting, looks like attendance here in Tulsa is well below campaign's expectations. Here's the main floor at the arena currently pic.twitter.com/EASfSHL5nN

The scene from the press box in the overflow section as the president speaks. pic.twitter.com/aKekXBRiOv

A video panorama view inside the arena for @realDonaldTrump rally in Tulsa. pic.twitter.com/h4H8r60YwQ

In a tweet, Trump’s campaign manager Brad Parscale blamed the low turnout on “radical protestors, fuelled by a week of apocalyptic media coverage, interfered with @realDonaldTrump supporters at the rally.”

“They even blocked access to the metal detectors, preventing people from entering,” he wrote, and linked to a Washington Times article about the rally.

But as the Washington Times’ story itself noted, “areas outside the arena appeared to be sparsely populated about an hour before the president’s arrival.” And a pool report from Washington Examiner report Rob Crilly said that there was no sign of protesters or supporters on Trump’s motorcade’s route to the arena.

Trump’s appearance at the BOK Centre in Tulsa was the first of his 2020 re-election campaign rallies since the COVID-19 pandemic struck the United States.

Trump wants to declare victory over the novel coronavirus pandemic as cases, positive test rates, and hospitalizations from COVID-19 rise in several states, including Oklahoma.