Faced with the prospect of losing to a man he spent months hammering as corrupt, doddering, and mentally deficient, President Donald Trump is going on offence, spreading lies and conspiracy theories about a “rigged” election marred by “major fraud” from Democrats.

He’s alternated between demanding that some states stop counting ballots, which he doesn’t have the power to do, and saying that others should keep counting, which they were doing anyway.

To that end, the Trump campaign, Republican allies, and Trump himself have mounted at least 42 legal challenges since Election Day.

They have won zero.

The lawsuits argue that states and counties have violated election laws, playing into Trump’s political strategy to discredit the results of the 2020 election that President-elect Joe Biden won.

Republicans have filed the lawsuits in local, state, and federal courts in Arizona, Georgia, Michigan, Nevada, and Pennsylvania â€” all states that Biden won. They have also filed direct appeals to the Supreme Court, all of which have also failed.

The Trump campaign initially had a single win, when a Pennsylvania judge ruled on November 12 that first-time voters were supposed to confirm their IDs with county boards of election by November 9, rather than November 12. The decision opened the door to disqualify the ballots of people who didn’t verify their IDs in time. But the state Supreme Court later overturned that decision.

That leaves Trump and other Republicans with at least 38 cases they have withdrawn or lost, and four that are still pending. 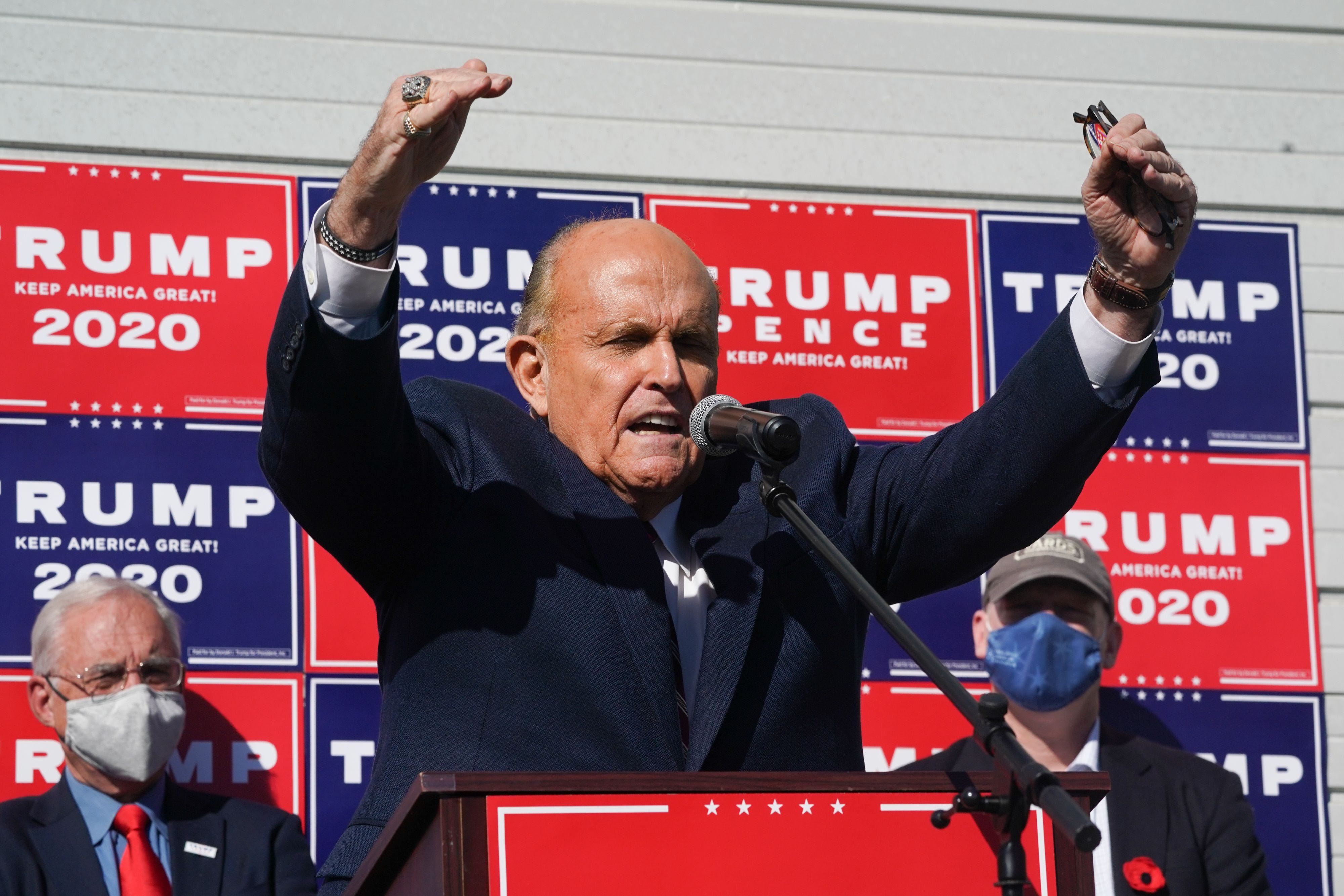 BRYAN R. SMITH/AFP via Getty ImagesAttorney for the President, Rudy Giuliani, speaks about election lawsuits at a news conference in the parking lot of a landscaping company on November 7, 2020 in Philadelphia.

Here’s a list of the lawsuits and where they stand

Direct appeals to the Supreme Court â€” 2 losses, one pending

Justice Amy Coney Barrett declined to participate in the case “because of the need for a prompt resolution of it and because she has not had time to fully review the parties’ filings,” the court said in a statement. However, Barrett has not recused herself, meaning she could cast a decisive fifth vote when the Supreme Court takes up the case again.

In a similar case brought by Republicans in North Carolina, the Supreme Court ruled that ballots received up to nine days after November 3 could be counted as long as they are postmarked by Election Day.

The decision came after the Trump campaign and Republicans asked in two separate cases for the high court to put back in place a June statute from the state’s Republican-controlled Legislature that would have allowed ballots to be counted only if they were received up to three days â€” not nine â€” after Election Day.

Five justices â€” Roberts, Kavanaugh, Breyer, Kagan, and Sotomayor â€” ruled against reinstating the statute. Gorsuch, Alito, and Thomas dissented, while Barrett did not participate in the North Carolina case.

Republicans notched a victory in a case involving the deadline to receive ballots in Wisconsin. The US Supreme Court ruled against reviving an appeals court decision that would have allowed election officials to receive absentee ballots up to six days after Election Day.

The Wisconsin case made headlines because of Kavanaugh’s and Kagan’s dueling opinions.

Kavanaugh, a Trump-appointed justice who was confirmed to the high court in 2018, wrote in a concurring opinion that all ballots should be received by Election Day.

“Those States want to avoid the chaos and suspicions of impropriety that can ensue if thousands of absentee ballots flow in after election day and potentially flip the results of an election,” he wrote. “And those States also want to be able to definitively announce the results of the election on election night, or as soon as possible thereafter.”

Kagan fired back in a sharp dissent, taking issue with Kavanaugh’s assertion that the arrival of absentee ballots after Election Day could “flip” the results of the race.

“Justice Kavanaugh alleges that ‘suspicions of impropriety’ will result if ‘absentee ballots flow in after election day and potentially flip the results of an election,'” she wrote. “But there are no results to ‘flip’ until all valid votes are counted. And nothing could be more ‘suspicio[us]’ or ‘improp[er]’ than refusing to tally votes once the clock strikes 12 on election night. To suggest otherwise, especially in these fractious times, is to disserve the electoral process.”

A federal court in Texas and the state’s Supreme Court denied two Republican requests to throw out nearly 130,000 ballots that were cast via drive-thru polling sites in Harris County, one of Texas’ most heavily Democratic areas.

The Texas Supreme Court rejected a request from Republican candidates and activists to toss the ballots. US District Judge Andrew Hanen, appointed by President George W. Bush,reached the same conclusion and denied the second request from GOP candidates and a right-wing radio host.

Hanen ruled that the plaintiffs did not have the standing to sue and ask that ballots that were legally cast be discounted. However, he ordered the county to set aside the 127,000 ballots in case an appeals court disagreed with him and ultimately threw those votes out.