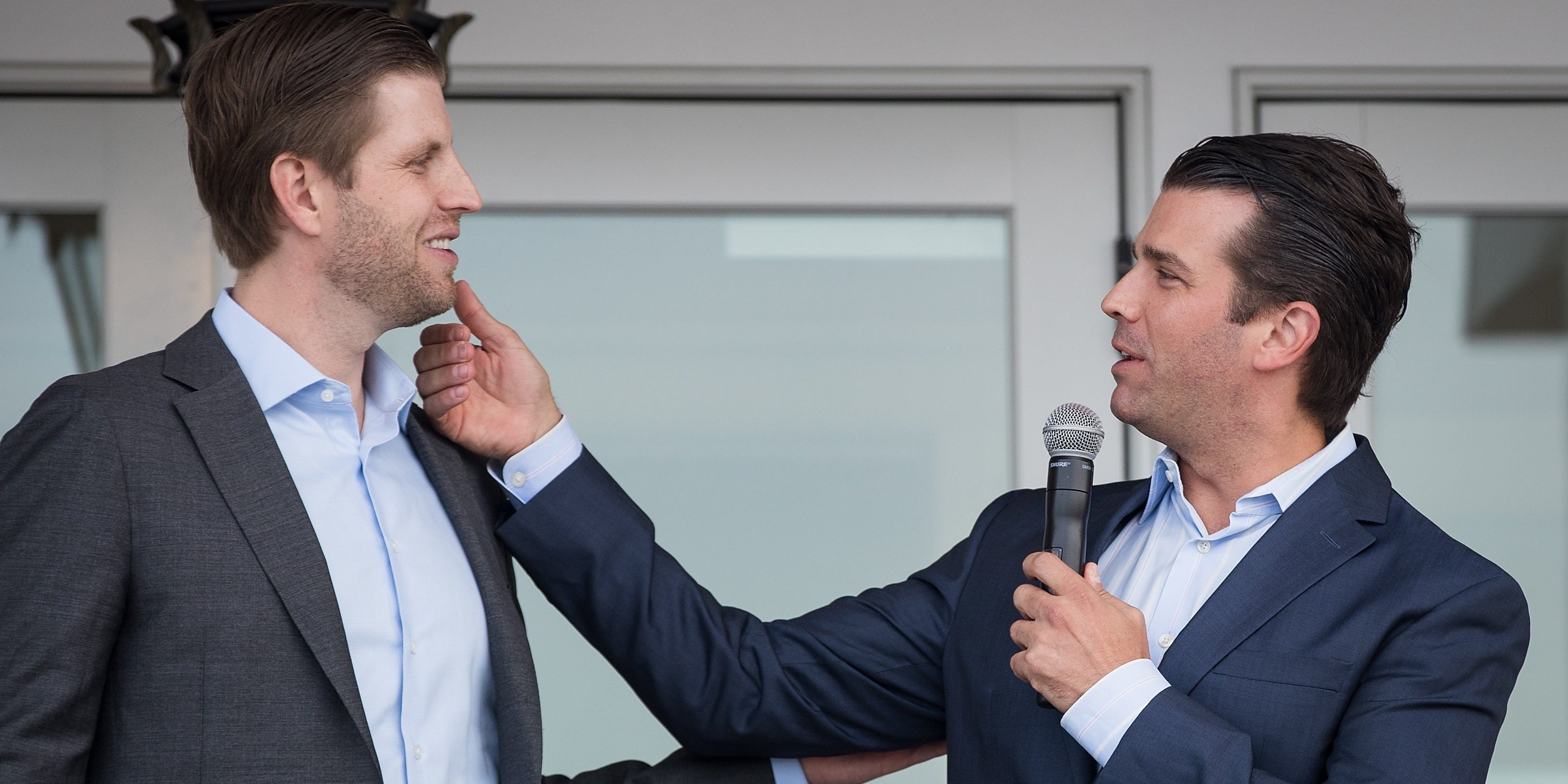 For those who have donated to the Trump 2020 campaign or otherwise ended up on their email list somehow, a summer shift in fundraising tactics has saturated inboxes.

Aggressive fundraising emails from campaigns are nothing new, nor is the Trump campaign’s use of surrogate cameos as the apparent sender. That method was pioneered by the Obama campaign going back to 2008 and refined to become the standard bearer for national politics in 2012.

But instead of a top campaign official or surrogate offering warm invitations such as “I want you to see this first,” the Trump campaign has leaned more into guilt and borderline intimidation.

This fundraising email is an emotional rollercoaster pic.twitter.com/u5C9U6X6Rw

Campaign fundraising staff tend to pour over the data for different approaches – particularly the rate at which emails are opened and an actual donation comes through – but for those who haven’t clicked on anything in their inbox from the Trump campaign recently, things can get personal pretty quickly.

“I convinced my father to give you another chance,” Eric Trump wrote in a recent subject line.

To hammer home the point about accepting the campaign’s offer to match donations, Eric laid down the gauntlet before signing off: “We won’t extend your match offer again. Don’t let the President down.” 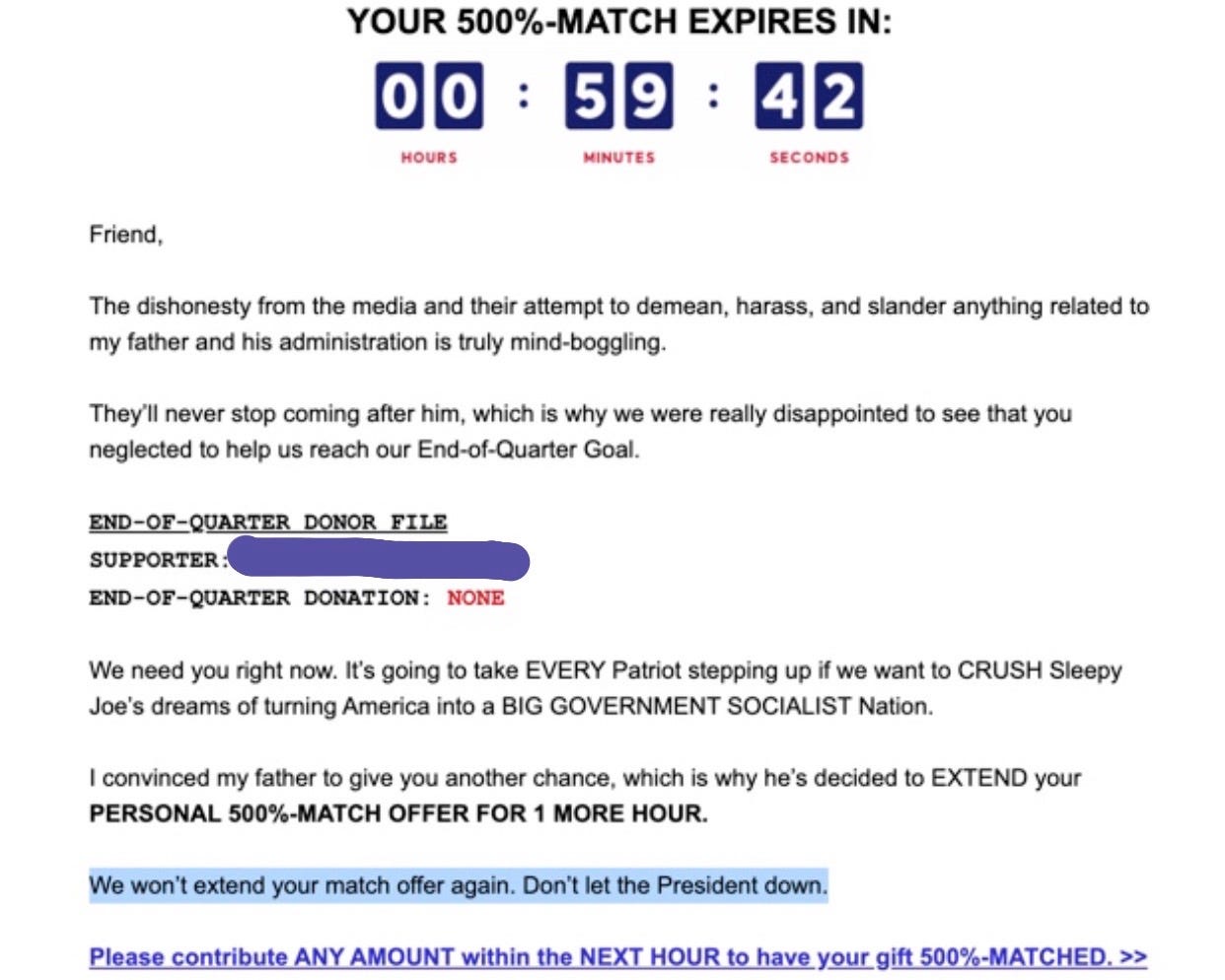 A July 19 email from Don Jr. goes with a simple shot and chaser: “My father – he needs you.”

“My father really wants YOU on his team as a member of the Trump 100 Club,” the email says. “I’m a member, my brother Eric is a member – we’re just waiting on YOU.”

Sometimes figures outside of the family make a cameo, like when former House Speaker and Republican presidential candidate New Gingrich popped up in June.

“We need you,” Gingrich wrote in the subject line before deploying a similar line warning of disappointing Trump.

“This is your last chance.”

The Trump campaign has found ways to carve their own online strategy – particularly with their attention grabbing campaign app – but the fundraising emails are the bread and butter of any modern presidential bid.

While former Vice President Joe Biden’s campaign struggled with online fundraising during the primary, things have turned around since he became the presumptive nominee, no longer having to compete with small donor juggernauts like Sens. Bernie Sanders and Elizabeth Warren.

Biden has actually outraised Trump over the past two months, with an average donation falling around $US34.

Some recent developments in the Trump campaign could lead to a change in tactics.

Brad Parscale, Trump’s internet campaign guru at the helm of the reelect operation since the outset, was demoted earlier this month in favour of newly minted campaign manager Bill Stepien.

Further complicating matters are allegations of “irresponsible spending” from sources inside the campaign leveled at National Finance Chair Kimberly Guilfoyle, who is also Don Jr.’s girlfriend.

To keep up with the Trump campaign’s strangest fundraising emails without having to see them pile up in a personal inbox, you can follow @TrumpEmail, an account dedicated exclusively to tracking their frequency and content.

For all of 2020, the top overarching theme is end-of-month deadlines, (which also holds a healthy lead on the top spot for all emails I’ve received since 1/1/18). pic.twitter.com/e7MhnVWqBH

But if you do sign up for the Trump campaign’s emails, be prepared for a stern reminder from Don Jr. and Eric.