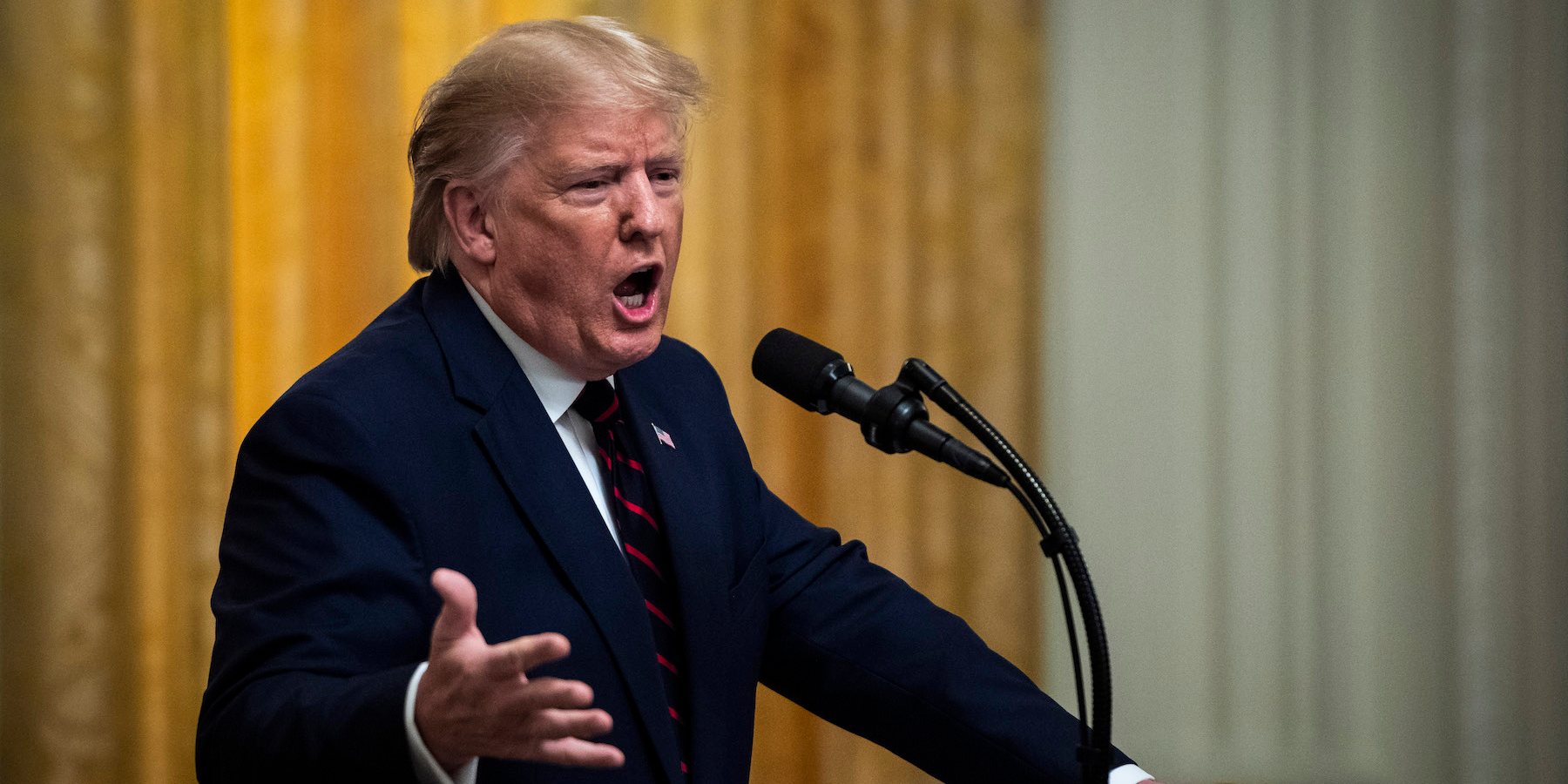 President Donald Trump called in to a Republican-organised event in Gettysburg, Pennsylvania on Wednesday to float baseless claims about voter fraud and asked why the results of the 2020 race haven’t been overturned as his legal challenges continue to fail.

Trump was originally scheduled to attend the event at the Wyndham hotel in person but cancelled the trip after a campaign adviser, Boris Epshteyn, tested positive for the novel coronavirus. Trump’s personal defence lawyer, Rudy Giuliani, went to the event despite also being exposed to the virus after at least two people he was in contact with tested positive, including his son, Andrew.

Giuliani is spearheading Trump’s efforts to nullify the election results. Among other things, the president and his lawyer have suggested that large numbers of dead people voted in the election, that voting machines were tampered with, ballots were secretly dumped, and Democrats conspired with “big media” to rig the race in favour of President-elect Joe Biden.

None of these claims hold merit, and Trump’s own Department of Homeland Security has debunked many of the conspiracies through its “Rumour Control” website. In fact, as Insider previously reported, the 2020 election was the safest and most secure election in US history because of the use of paper ballots and voting machines with verifiable paper trails.

Still, on Wednesday, the president rehashed many of those talking points.

Here are some of his most noteworthy claims, and how they stack up with reality

What Trump said: “This was an election that we won easily. We won it by a lot. This election was rigged â€¦ we won all of these swing states by a lot.”

Fact check: Biden won the election. He received over six million more votes than Trump and is projected to win 306 Electoral College votes, which is significantly more than the 270 electoral votes a candidate needs to clinch the presidency. He picked up almost every swing state, including Michigan, Pennsylvania, and Wisconsin, all of which Trump won in 2016. Biden also carried Arizona and Georgia, which a Democratic candidate had not won since 1996 and 1992, respectively.

Fact check: The Trump campaign has not provided verifiable evidence that people committed widespread voter fraud by illegally voting using names of deceased individuals. And election experts have conceded that it does happen, but not to a large enough extent that it would sway the results of an election.

What Trump said: “We have hundreds and hundreds of affidavits, of stories that are even worse than the stories I’m hearing. Why wouldn’t they overturn an election â€” certainly overturn it in your state. Because we have other states that are just as bad.”

Fact check: It’s true that the Trump campaign and Republicans who support the president have filed lawsuits with hundreds of pages of affidavits, but they haven’t won a single noteworthy case so far. And over the weekend, the campaign lost its biggest election challenge, which sought to block Pennsylvania from certifying its election results, when a federal judge dismissed the case and said the Trump campaign was seeking to “disenfranchise” seven million Pennsylvania voters.

What Trump said: “All you had to do was take a look at the numbers at 10 o’clock in the evening when everybody thought the election was over, and then very weird things happened.”

Fact check: It’s true that as of 10 p.m. ET on election night, Trump was ahead after securing early victories in states like Florida and Texas. However, election experts widely expected that it would take at least a few days to get the final projected results given the unprecedented surge in mail-in voting this year and the fact that the general election took place amid a pandemic.

What Trump said: “They got caught. Just like they got caught spying on my campaign. So, I really appreciate it, and the country appreciates it, and we have to turn the election over. All we need is to have some judge listen to it properly, without having a political opinion or having another kind of a problem.”

Fact check: Multiple judges across the country have heard the Trump campaign’s and Republicans’ allegations related to the election. The president, Republicans, and Trump-supporting voters have filed nearly 40 legal challenges since the election and have won just one â€” and that victory did not materially change the results of the race.

When he said Democrats “got caught spying on my campaign,” Trump was referring to a long-running Republican conspiracy theory that alleges the Obama administration secretly masterminded the FBI’s investigation into Russian interference to undermine the Trump presidency, and that a cabal of senior FBI and Justice Department officials illegally surveilled the Trump campaign in 2016 as part of that effort.

The Justice Department inspector general investigated those claims and found no evidence to support them. Attorney General William Barr, one of Trump’s most loyal allies, also oversaw a second, separate investigation into the matter, which ended last month without uncovering any evidence of a Democratic conspiracy against Trump. And another investigation that Barr opened into allegations related to Trump’s claims, which accused the Obama administration of illegally “unmasking” former national security advisor Michael Flynn’s names in intelligence reports, also wrapped up without criminal charges or a public report.