Trump called journalists 'scumbags' who should be 'executed,' according to John Bolton's new book 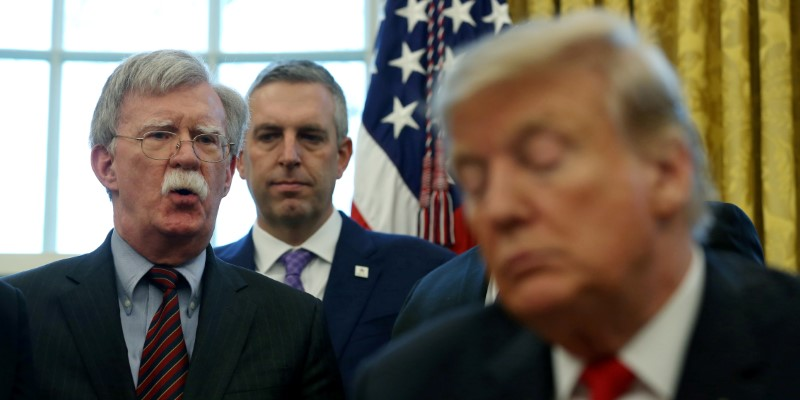 Former National Security Advisor John Bolton recounts in his forthcoming memoir that President Donald Trump said members of the news media are “scumbags” who should be “executed.”

The Washington Post, which obtained a copy of Bolton’s book “The Room Where It Happened” before its June 23 publication, reported that according to Bolton, Trump made the comments during a July 2019 meeting in New Jersey, where the Trump Organisation owns a golf course and resort.

Bolton said that Trump, who has been extremely vocal about his displeasure with media coverage of his presidency, suggested that more journalists should be arrested and jailed so the government could compel them to reveal their sources.

“These people should be executed,” Trump said in the meeting, according to Bolton. “They are scumbags.”

Guy Snodgrass, a former speechwriter and aide to former Secretary of Defence James Mattis, confirmed in a Wednesday tweet that Trump made the remark about journalists being “scumbags” and repeated the same sentiment on another occasion. Mattis served as Secretary of Defence under Trump for two years from January 2017 to January 2019.

"Bolton alleges Trump privately told him reporters deserve prison. "These people should be executed. They are scumbags.""

Can confirm. This sentiment expressed again during Trump's meeting with Mattis in the Pentagon.https://t.co/8JdBVA6xYU

Both in his 2016 election campaign and again during his presidency, Trump has called for libel laws to be “opened up” so that journalists and news organisations can more easily be sued.

“We are going to take a strong look at our country’s libel laws, so that when somebody says something that is false and defamatory about someone, that person will have meaningful recourse in our courts,” Trump said in January 2018.

On Wednesday afternoon, The New York Times, Washington Post, and Wall Street Journal published either excerpts of Bolton’s upcoming book or stories based on pre-publication copies they obtained.

The book paints Trump in an extremely unflattering light, with Bolton characterising Trump as an irrational and unfit president, especially on matters of national security and foreign policy, which was Bolton’s area of expertise in the administration.

Bolton himself had a complicated legacy in his 16-month tenure as Trump’s National Security Advisor. As the Post described it, Bolton takes “a scalpel” to several other senior administration officials but “seems to hold himself in high regard and admits few mistakes of his own.”

Many Democrats have criticised him for not divulging his most bombshell revelations about Trump and his interactions with foreign leaders during Trump’s impeachment proceedings and instead, making a significant profit off them with his book.

Pompeo mocked Trump as being ‘full of s–t’ during his meeting with North Korean leader Kim Jong Un, according to John Bolton’s new book

Trump didn’t know Britain was a nuclear power and inquired whether Finland was part of Russia, according to John Bolton’s bombshell memoir