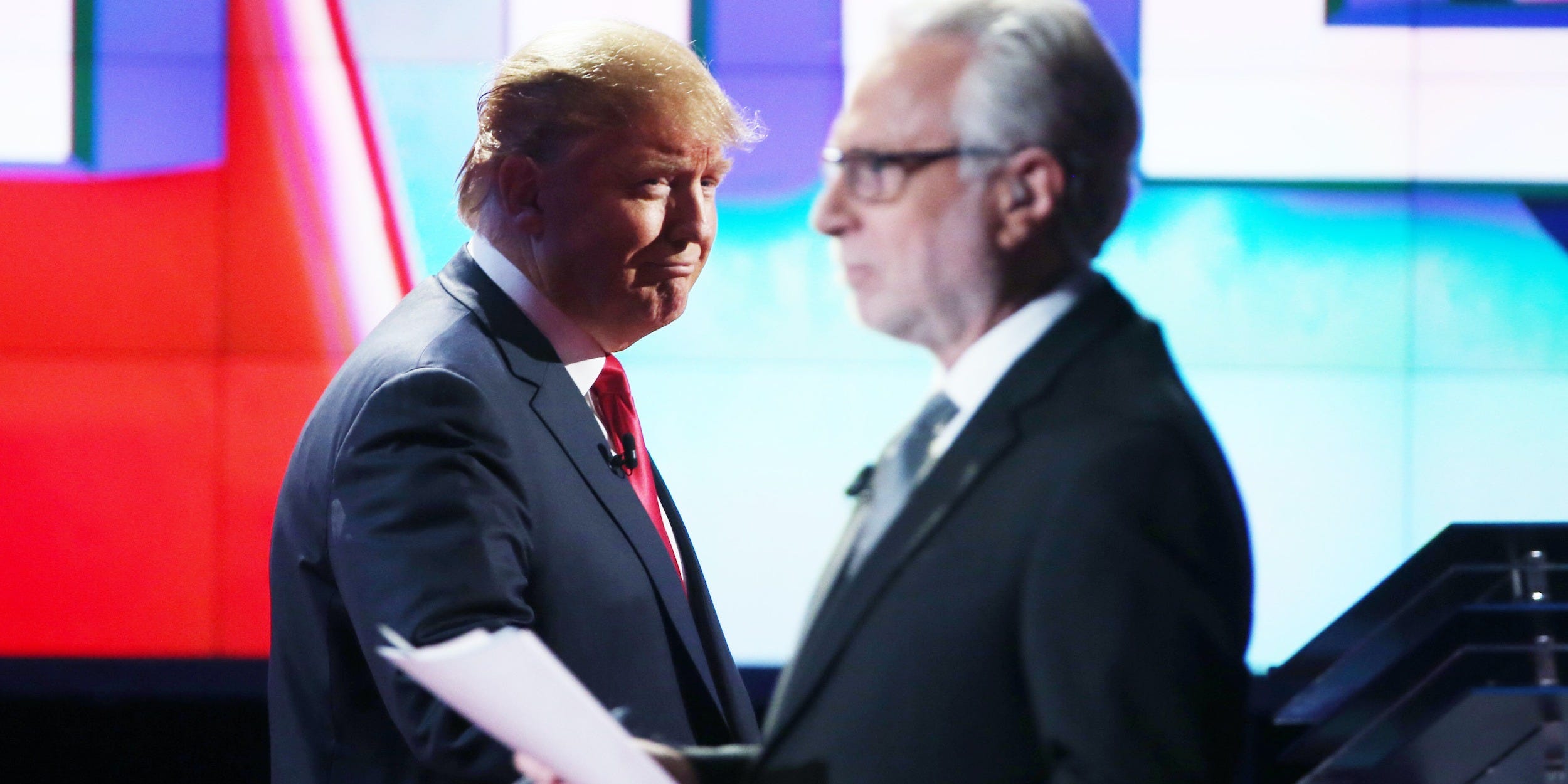 Justin Sullivan/Getty ImagesDonald Trump and Wolf Blitzer ahead of a 2015 GOP debate.

Last week, Trump accused Biden of plagiarism on flimsy grounds when the former VP rolled out his “buy American” economic plan, but he has been vocal about Biden and plagiarism going back to 2008.

In an interview transcript unearthed by Insider, the first thing Trump jumped to when asked to weigh in on Biden being picked as Obama’s VP nominee was the Delawarean’s history of plagiarism. This 2008 CNN interview sheds light on Trump’s instincts when it comes to his 2020 opponent.

Asked by Wolf Blitzer to offer his thoughts on Biden joining the ticket, Trump replied, “I really don’t know Senator Biden but I know one thing. He’s run a number of times for president. He’s gotten less than 1 per cent of the vote each time.”

“And that’s a pretty tough thing,” Trump continued. “You know, he’s also been involved in pretty big controversy like plagiarism in college and various other things. That’s a pretty big statement. So perhaps you change over a period of time. But when you plagiarize, that’s a very bad statement.”

Levelling allegations of plagiarism may not be the sturdiest ground for Trump, given how his wife Melania was caught red-handed lifting lines from a Michelle Obama speech in her 2016 Republican National Convention address, and now that Trump faces questions over cheating on an SAT exam.

There is no evidence Biden’s 2020 campaign copied any verbiage or figures from Trump for it’s “buy American” plan, though Biden’s plan did earn begrudging praise from Trump’s former chief strategist, Steve Bannon.

In the 2008 sitdown with Blitzer, Trump went after Biden over plagiarism, but not the 1987 plagiarism scandal that has typically generated the most headlines. That involved media reports showing Biden appeared to lift passages from a British Labour Party politician, which contributed to his failed 1988 presidential bid.

“That hasn’t been brought up yet, but I’m sure at some point it will,” Trump continued. “I’m sure that Sarah Palin will bring it up in a debate or somebody’s going to bring it up.”

Blitzer then asked if Trump was referring to the 1987 scandal.

Biden did admit to plagiarizing in an essay he submitted as a Syracuse Law student in 1965, to which Trump may have been referring.

Trump went on to paint Biden as a potentially weaker VP pick than Obama’s longest standing opponent in the 2008 primary and his eventual secretary of state, Hillary Clinton.

“More importantly, he didn’t get 1 per cent of the vote,” Trump said of Biden during the 2008 campaign, where he only made it to Iowa before dropping out.

“Hillary got more than 50 per cent of the vote. So say why isn’t he picking Hillary? It just doesn’t make sense.”

A clip from Blitzer’s 2008 interview with Trump made the rounds in late 2019 during the impeachment scandal – for different reasons.

Trump told Blitzer he thought House Speaker Nancy Pelosi should have moved to impeach then-President George W. Bush when the Democrats had the majority later in his presidency.

Both instances point to Trump claiming to adhere to a relatively higher standard of conduct in office than he has demonstrated in his first three years in the White House.

The Trump comments on Biden’s plagiarism also stand out now that he has been accused of cheating on his SAT.

Trump insisted Biden would have to answer for his plagiarism issues in his debate against Republican VP pick Sarah Palin, though the topic never came up.

“Maybe he has a fine answer and maybe it didn’t take place,” Trump told Blitzer. “I think it’s pretty serious and a very serious charge.”