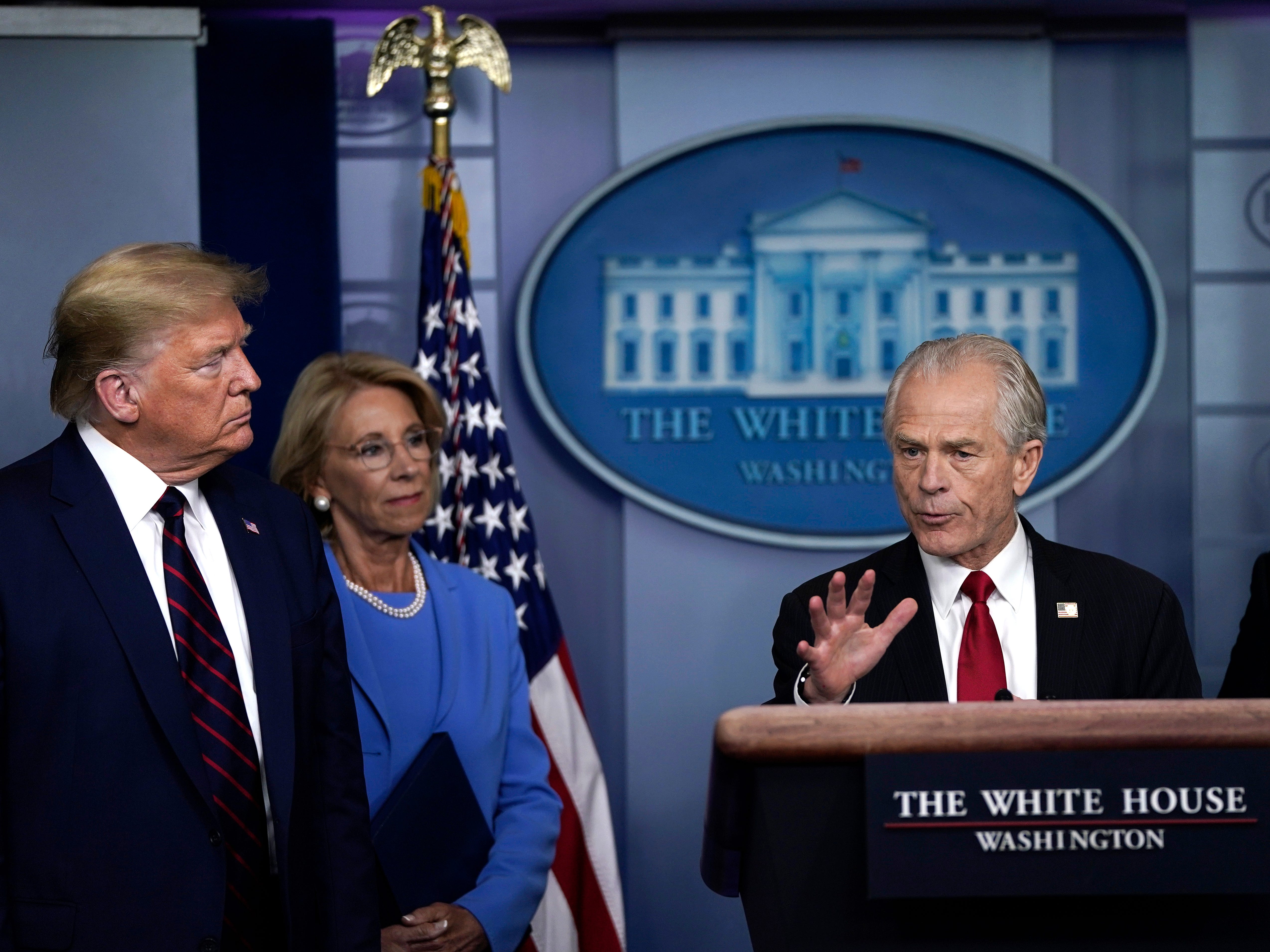 Drew Angerer/Getty ImagesWhite House Trade and Manufacturing Policy Director Peter Navarro speaks during a briefing on the coronavirus pandemic in the press briefing room of the White House on March 27, 2020.

A senior adviser to former President Donald Trump pushed agency officials to secure huge COVID-19 contracts for politically connected and untested firms, according to documents from an inquiry by the Select Subcommittee on the Coronavirus Crisis.

Peter Navarro, who served as a trade adviser to Trump, is one of the officials accused of pursuing a “haphazard and ineffective approach to procurement” and steering contracts “to particular companies without adequate diligence or competitions.”

There are numerous examples outlined in the inquiry of how the Trump aide played a significant role in rewarding multimillion-dollar deals to companies with connections to the White House, ProPublica reported.

On one occasion, Navarro awarded a $96 million deal for respirators to a company with links to the administration – Airboss Defense Group (ADG).

Retired Army general Jack Keane, a Trump ally and paid consultant for ADG, sent a catalog of the company’s items to Navarro on March 22, 2020. Keane had just been awarded the Presidential Medal of Freedom by Trump days earlier.

Navarro and members of the White House Coronavirus Task Force had a phone call with representatives from ADG later that day, according to the House inquiry.

Then, a day after the call, ADG submitted a $96.4 million proposal to Navarro’s team. He responded by telling the firm in an email that they could “consider it done,” the documents show.

On another occasion, the Trump aide pushed for an untested pharmaceutical company to sign a major deal to produce pharmaceutical ingredients and generic drugs.

The $354 million contract went to a newly-formed start-up, Phlow. “It was the largest contract ever awarded by BARDA (Biomedical Advanced Research and Development Authority), even though Phlow was a first-time government contractor that had incorporated just months earlier in January 2020,” documents from the Select Subcommittee show.

Navarro had been introduced to Phlow’s chief executive months earlier, the documents say. He had also developed a friendship with a Phlow board member over their shared China skepticism, Insider’s Tom Porter reported.

The Trump aide also put pressure on agency officials to get the deal done quickly, the inquiry finds. “My head is going to explode if this contract does not get immediately approved,” Navarro wrote to BARDA officials.

The former trade adviser is accused of coordinating with executives at the Eastman Kodak Company. The photography business has a “complete lack of experience in the field,” the subcommittee’s letter says. Nevertheless, the firm entered into a letter of intent in June 2020 to manufacture pharmaceutical agents.

Navarro has made headlines in recent days for spreading baseless claims about COVID-19 and for railing against Dr. Anthony Fauci.

During a Fox News interview with Rachel Campos-Duffy, Navarro referred to Fauci as “the father of the actual virus.” He also called Fauci a “sociopath and a liar” who had “nothing to do with the vaccine,” Insider’s Sinéad Baker reported.