8 days after his acquittal, Trump openly admitted sending Giuliani to hunt for dirt on Joe Biden — reversing a key part of his impeachment defence 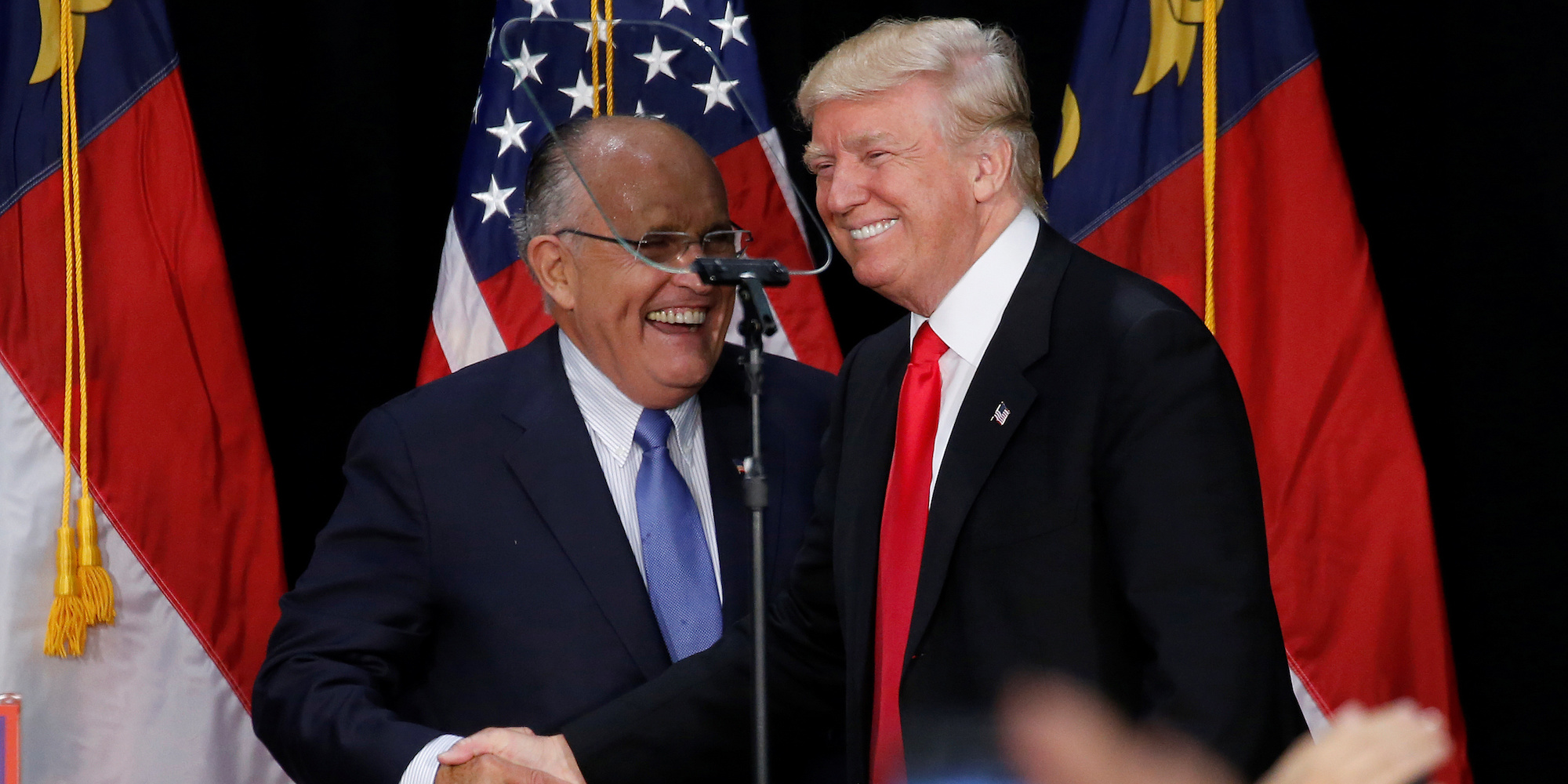 President Donald Trump on Thursday casually cast aside one of the central claims of his impeachment defence by openly admitting to sending his personal lawyer Rudy Giuliani to Ukraine to hunt for dirt on the 2020 Democratic presidential candidate Joe Biden.

The president made the claim in a podcast interview with the Fox News personality Geraldo Rivera, who had asked him whether it was “strange to send Rudy Giuliani to Ukraine” and whether he regretted the decision.

“No, not at all,” said Trump, who then praised Giuliani as a “crime fighter.”

Giuliani last year led a campaign in Ukraine to seek damaging information on Biden, the former vice president who emerged as a leading contender for the Democratic nomination. He tried to get Ukraine to announce an investigation into the role Biden’s son Hunter had as a board member on the Ukrainian energy firm Burisma.

Trump previously said he did not direct Giuliani’s efforts in Ukraine, seeking to distance himself from damaging information that emerged during his impeachment trial in the House last year. 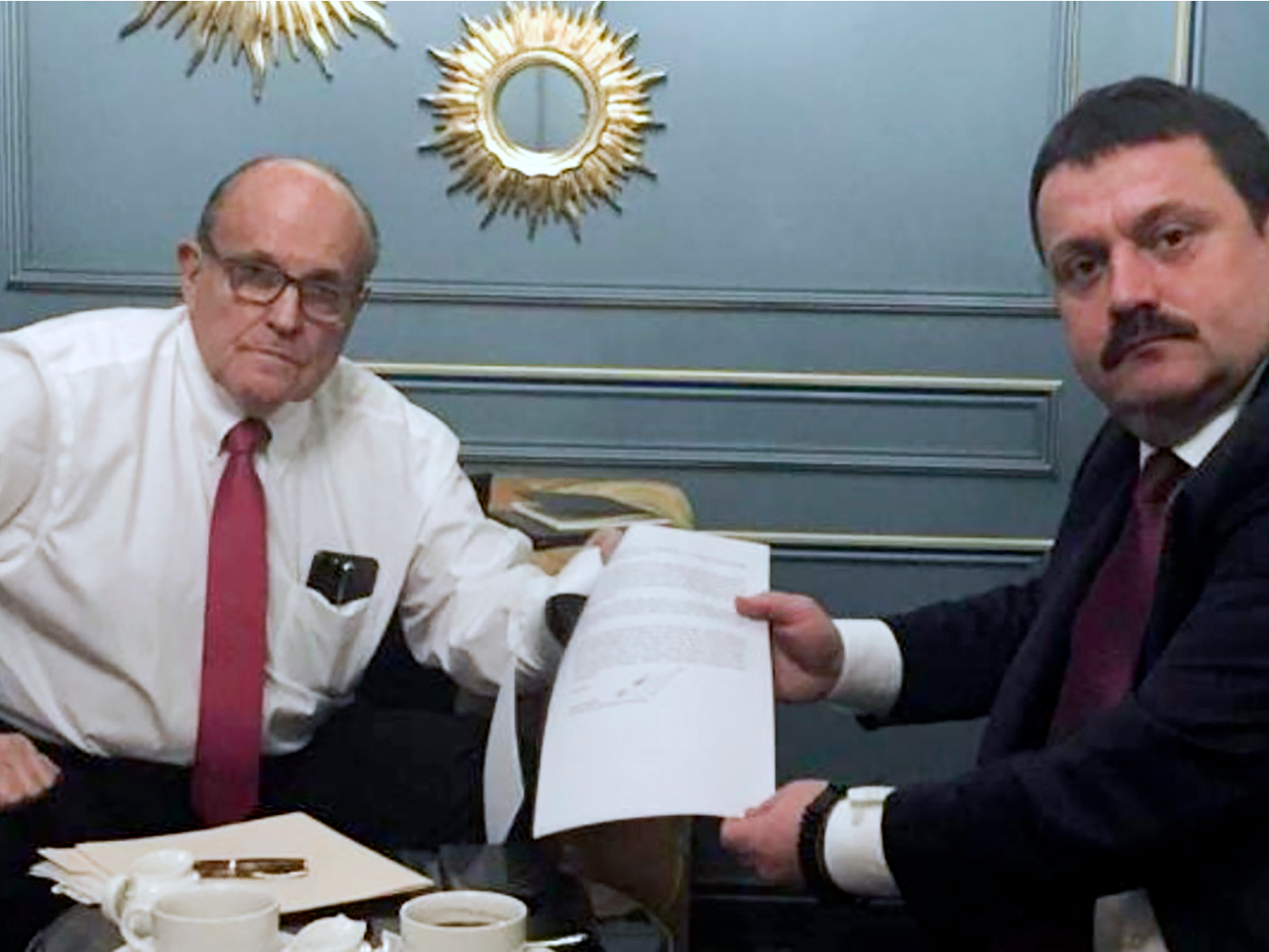 Associated PressGiuliani with the Ukrainian lawmaker Adriii Derkach in Kyiv, Ukraine, in December.

The president told the former Fox News host Bill O’Reilly in November amid the House impeachment investigation: “No, I didn’t direct him, but he’s a warrior, Rudy’s a warrior.”

In Thursday’s podcast, however, the president openly acknowledged that Giuliani had been acting on his orders.

“Here’s my choice: I deal with the Comeys of the world, or I deal with Rudy,” Trump said, referring to James Comey, who Trump fired as FBI director for refusing to quash the investigation into Russian interference in the 2016 US election.

Trump has accused senior intelligence officials, such as Comey, of being part of a partisan plot to end his presidency.

One of the claims Giuliani was sent to Ukraine to pursue was the theory – which has long been debunked – that Ukraine had helped US intelligence frame Russia for attempting to subvert the 2016 election.

The House impeached Trump last year on charges of abuse of power and obstruction of Congress in his quest to seek Biden dirt from Ukraine. He was acquitted by the Senate of both charges on February 5.

APGiuliani and Trump at the Trump National Golf Club Bedminster clubhouse in New Jersey in November 2016.

‘FDR had a lawyer who was practically … totally involved with government’

Trump also showered praise on Giuliani on Thursday and appeared to justify using his personal lawyer to conduct government business.

“But also, other presidents had them. FDR had a lawyer who was practically, you know, was totally involved with government. Eisenhower had a lawyer. They all had lawyers.”

Giuliani had always maintained that in seeking information on Biden – and in seeking for Ukraine to investigate him – he was simply fulfilling his duties as Trump’s defence attorney.

But no evidence has emerged to substantiate allegations of wrongdoing by Biden or his son. Federal prosecutors in the Southern District of New York are said to be investigating whether Giuliani acted as an unregistered foreign agent in his Ukraine work.

Giuliani has denied the claims.

In the interview with Rivera, Trump also said he was considering barring officials from listening in to his calls with foreign leaders, given that a whistleblower complaint about his July 25 call with Ukraine’s president sparked the impeachment inquiry. He told the journalist he was spending time contemplating Richard Nixon, the previous Republican president involved in an impeachment investigation. 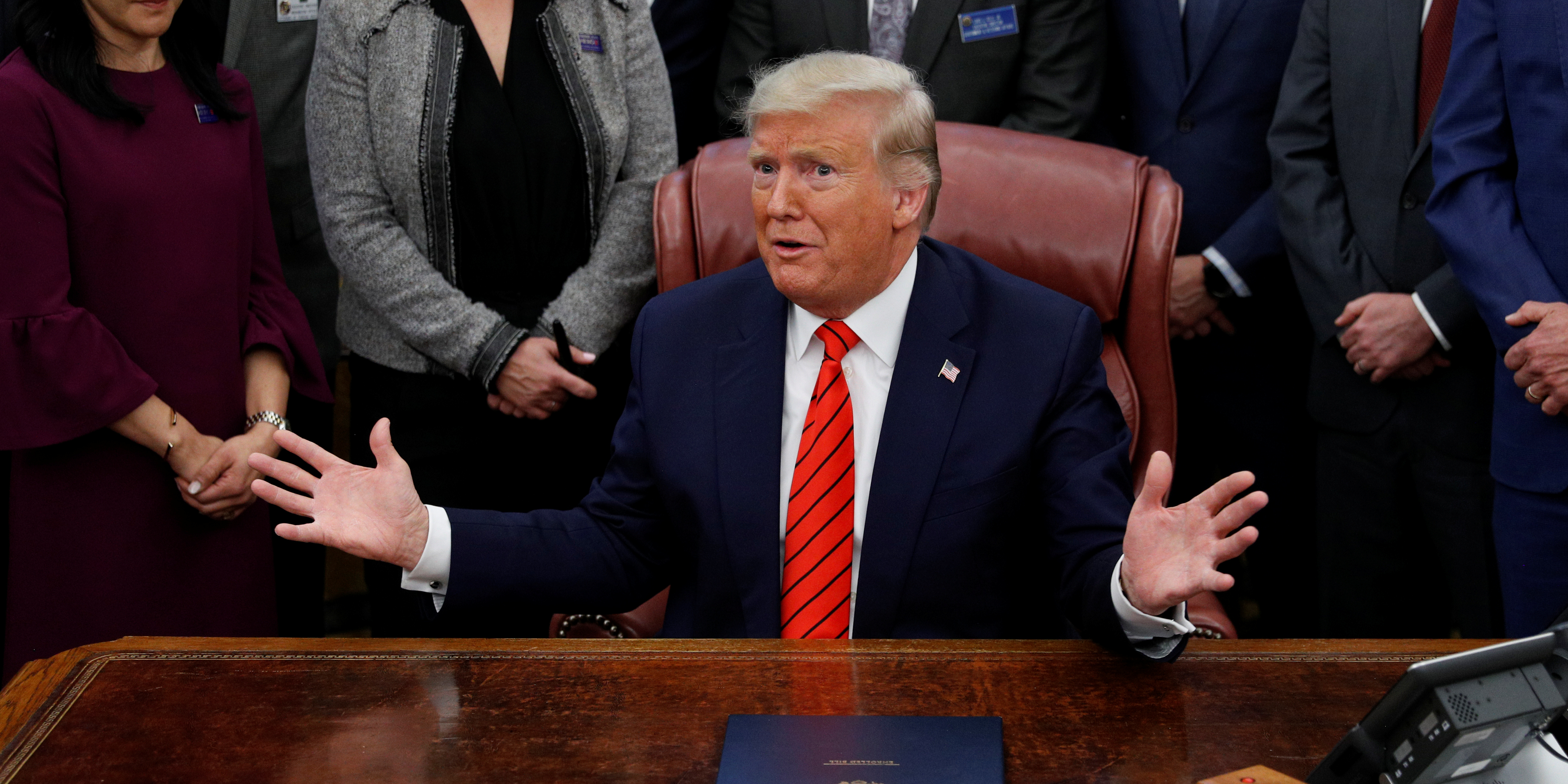 ReutersTrump at the White House on Tuesday.

In the wake of his impeachment acquittal, Trump has renewed attacks on former officials he claims have plotted against him – such as Comey – and appeared to use his office to try to block lawsuits that could personally damage himself and his allies.

Earlier this week he attacked prosecutors who secured the conviction of and recommended seven to nine years of prison time for his former adviser Roger Stone. Top Department of Justice officially subsequently overruled the recommended sentence, and the prosecutors resigned from the case en masse.

Despite the federal investigation into Giuliani, Attorney General William Barr on Monday said the DOJ had set up an “intake process” to investigate the information Giuliani uncovered on Biden in Ukraine – sparking accusations that he was enabling the politicization of the department to pursue the president’s rivals.

Barr attempted to dissuade those accusations on Thursday, telling ABC News that Trump had “never” asked him “to do anything in a criminal case.”

In a Thursday tweet, Trump also dangled Gov. Andrew Cuomo of New York a deal on immigration law, asking that his state “stop all of its unnecessary lawsuits & harassment, start cleaning itself up, and lowering taxes.”

The president did not specify which “lawsuits and harassment” he was referring to, but several investigations into the president and his business have been opened by authorities in New York.