Evan Vucci/AP PhotoPresident Donald Trump at an event for World Nurses Day on Wednesday in the Oval Office.

The White House buried a comprehensive report by the Centres for Disease Control and Prevention advising state and local officials on how to safely reopen public spaces while the United States remains in the clutches of the coronavirus pandemic.

The Associated Press reported on Thursday that the 17-page document contained advice from the nation’s leading disease experts on when and how to reopen schools and day camps, workplaces, restaurants and bars, mass transit systems, religious facilities, and childcare centres.

Titled “Guidance for Implementing the Opening Up America Again Framework,” the report, which includes suggestions for religious leaders, business owners, and academic professionals, was due to be published last Friday. The AP published that report and another CDC document with flowcharts for each sector to follow.

But an unnamed CDC official told the AP reporters Jason Dearen and Mike Stobbe that scientists were told it “would never see the light of day.”

The news service said it got a copy of the report from another federal official who wasn’t permitted to release it. The APalso published a story on April 28 describing the guidelines before the Trump administration chose to put the document aside.

What the CDC guidelines said 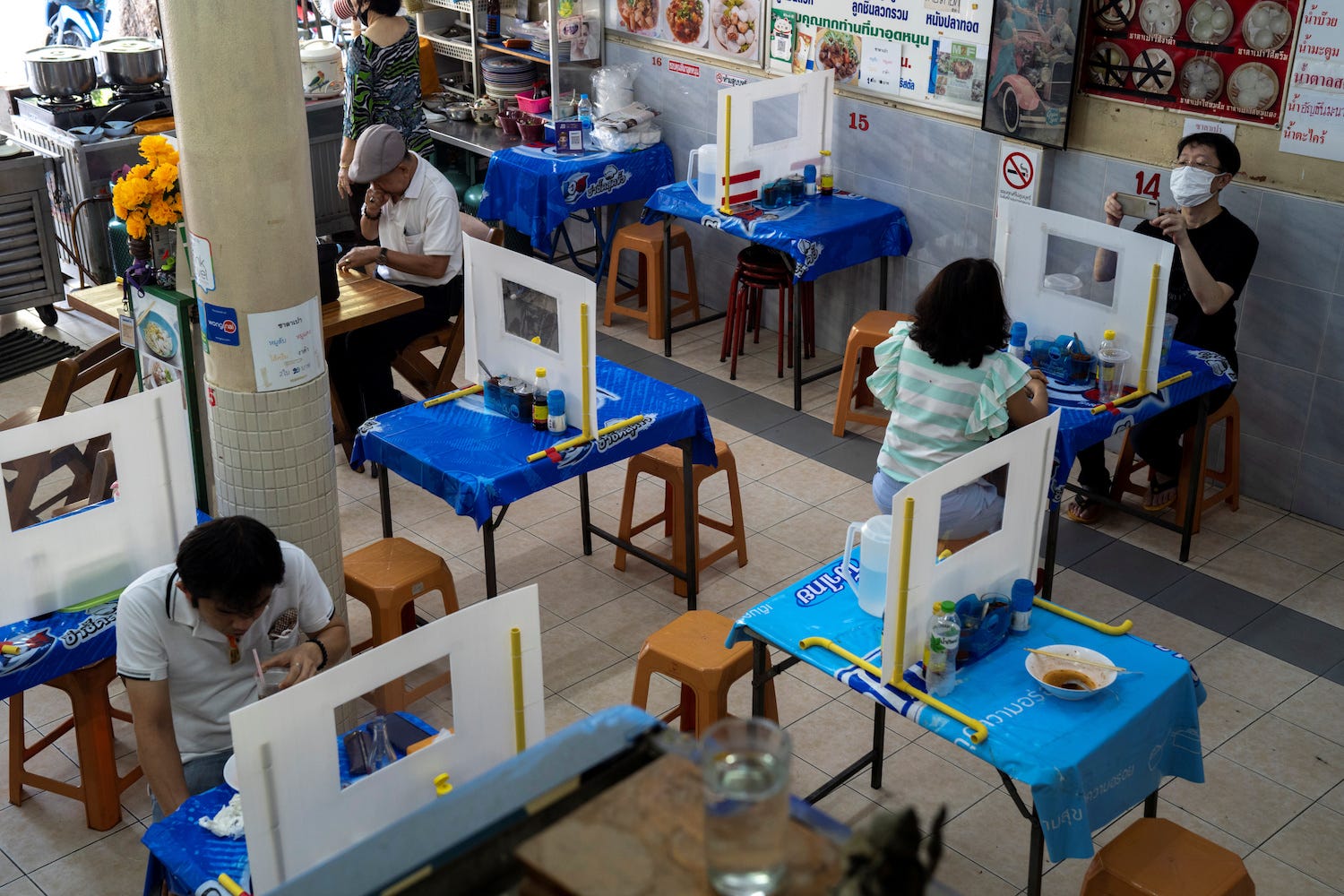 Athit Perawongmetha/ReutersPeople eating lunch on Wednesday in a noodle restaurant in Bangkok that reopened after the easing of coronavirus restrictions.

Recommendations for schools include placing desks 6 feet apart, calling off field trips and extracurricular activities, and asking students to eat meals in their classrooms instead of congregating in the cafeteria.

Faith leaders are asked to host virtual services or use drive-in outdoor spaces and to consider limiting attendance at funerals and weddings. If that isn’t feasible, they’re instructed to ensure that congregants wear face masks and to organise extra services so pews aren’t densely packed and so people can follow social-distancing guidelines even while worshipping.

Suggestions for restaurant owners include offering single-use menus and condiments, using disposable cutlery and dishes, and providing service via drive-thrus, delivery, and takeout. They are also asked to consider putting sneeze guards at cash registers, limiting the number of employees working at a time, reducing maximum occupancy, and nixing buffets, salad bars, and drink stations.

Mass transit administrators are asked to use floor decals or tape to ensure people maintain 6 feet of distance from one another. Buses and trains could reduce maximum capacity and cordon off every other row. The document also recommends installing partitions at kiosks and closing communal spaces like break rooms or staggering their use.

And see the CDC flowcharts for reopening restaurants, schools, offices, and more here »

The shelved guidance has been distributed widely within the CDC and includes “decision trees” for considering different scenarios for reopening, the AP reported. It also underscores the need for frequent handwashing, wearing face coverings, social distancing, thoroughly sanitizing spaces, and protecting vulnerable people.

Some of these recommendations are scattered across the CDC’s and the Food and Drug Administration’s websites, but this report collected all that advice and provided additional, specific guidelines. A source close to the White House’s coronavirus task force had told the AP that the White House didn’t want to provide sector-specific advice and described it as a “slippery slope” since the coronavirus hasn’t affected the entire nation in the same way.

A coronavirus task force official echoed the sentiment to Business Insider, adding that the White House’s “Opening Up America Again” guidelines released last month made it clear that each state should keep its “individual data and response efforts” in mind and reopen in a way that is “safe and responsible.”

“Issuing overly specific instructions – that CDC leadership never cleared – for how various types of businesses open up would be overly prescriptive and broad for the various circumstances States are experiencing throughout the country,” the official said. “Guidance in rural Tennessee shouldn’t be the same guidance for urban New York City.”

But Dr. Marcus Plescia, the chief medical officer of the Association of State and Territorial Health Officials, pushed back. “You can say that restaurants can open and you need to follow social-distancing guidelines,” Plescia told the AP. “But restaurants want to know, what does that look like? States would like more guidance.”

The AP also pointed out that the CDC usually provides scientific guidance to authorities nationwide during massive public-health crises such as the outbreak of the novel coronavirus, which has sickened more than 1.2 million people and killed more than 74,000 other people in the US, according to data from Johns Hopkins University.

But under the Trump administration, it’s often been the president at the podium during White House briefings, while the CDC hasn’t organised a news conference about COVID-19 in almost two months. The agency’s director, Dr. Robert Redfield, a member of the coronavirus task force, has also been conspicuously absent.

There’s been back-and-forth this week about whether the task force will be eliminated or be around “indefinitely.”

Trump has also preferred to leave it to state officials to put together a patchwork of stay-at-home orders. A White House spokeswoman, Kayleigh McEnany, said on Wednesday that while the White House had “consulted individually with states,” it was a “governor-led effort” and a “state-level effort” on which “the federal government will consult.”

The CDC did not immediately respond to Business Insider’s request for comment.

Read the full story from the AP »