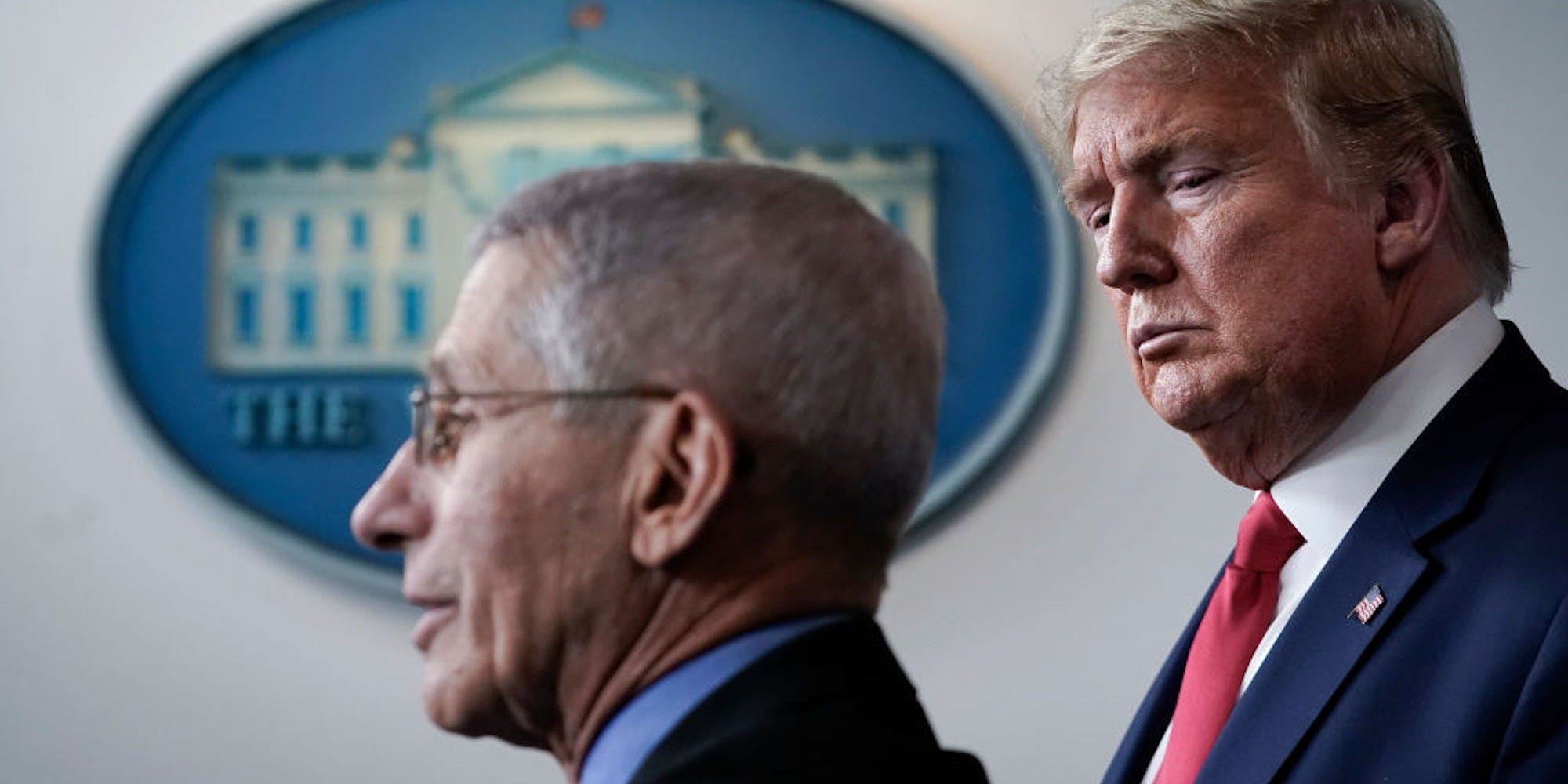 The Trump administration is backing away from its attacks on Dr. Anthony Fauci, the top US infectious-disease expert whose stark warnings about the coronavirus pandemic repeatedly clashed with President Donald Trump.

The White House trade adviser Peter Navarro had criticised Fauci in a scathing op-ed article on Wednesday, the most public move against Fauci by a government official.

“Dr. Anthony Fauci has a good bedside manner with the public, but he has been wrong about everything I have interacted with him on,” he wrote in USA Today.

It was one of a series of attacks on Fauci that escalated Sunday when an anonymous White House official provided news organisations a list of early statements Fauci made about the coronavirus that later proved incorrect.

But in remarks to reporters later on Wednesday, President Donald Trump defended Fauci and said Navarro was not speaking for his administration.

“Well he made a statement representing himself,” Trump said. “He shouldn’t be doing that. No, I have a very good relationship with Anthony.” 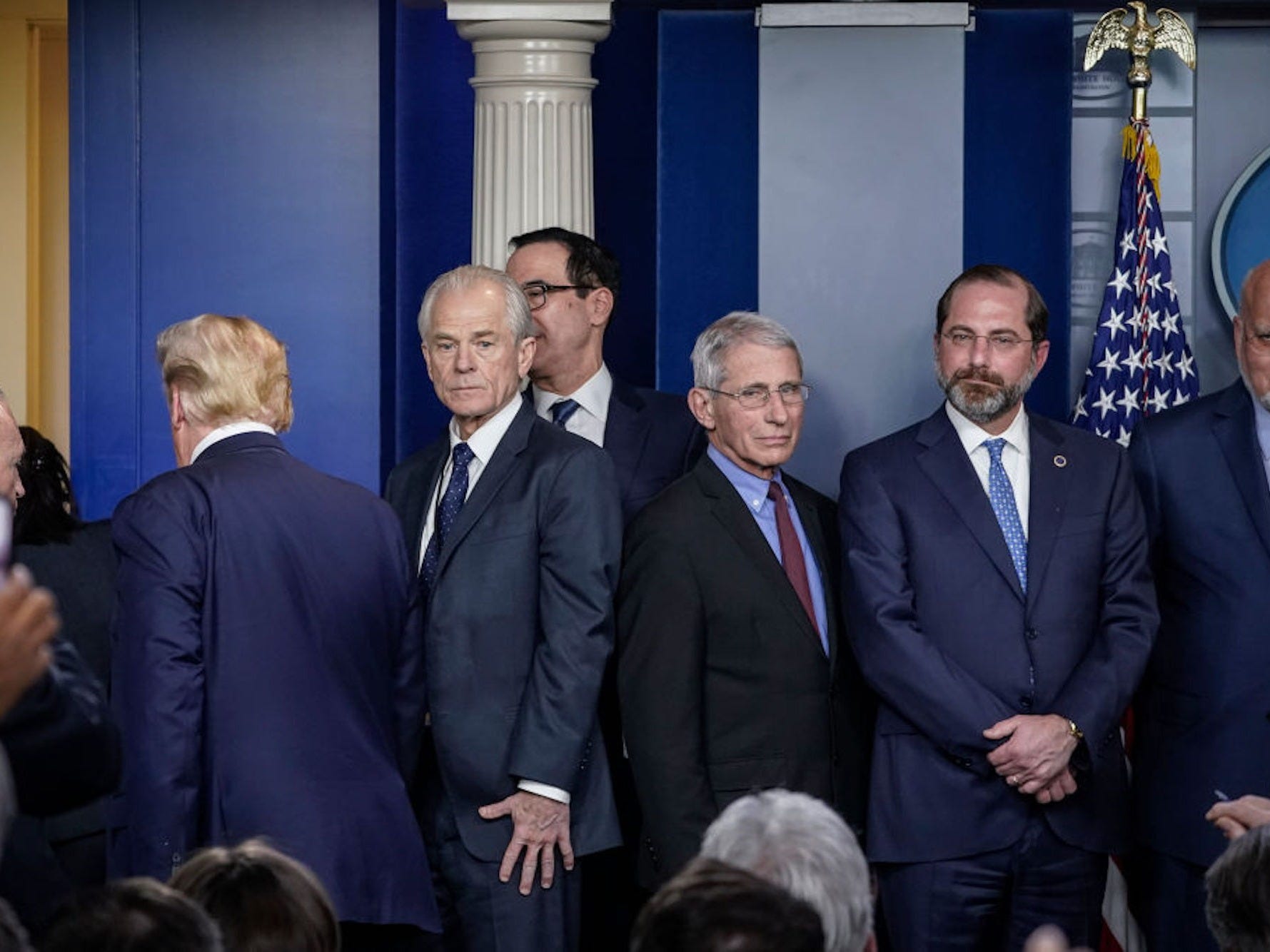 Drew Angerer/Getty ImagesTrump exiting a press briefing after speaking, with Peter Navarro directly to his right.

Only last week Trump had himself questioned Fauci’s credibility, remarking in an interview with Fox News’ Sean Hannity: “Dr. Fauci is a nice man, but he’s made a lot of mistakes.”

A White House official told NBC News that Navarro had acted against instructions, ignoring a directive from the White House chief of staff, Mark Meadows, to halt attacks on Fauci.

Meadows told reporters travelling on Air Force One on Wednesday, according to NBC, that the op-ed article was “a violation of well-established protocols that was not supported overtly or covertly by anyone in the West Wing.”

Later that day Navarro was abruptly pulled from a scheduled appearance on CNN’s “The Situation Room,” the host Wolf Blitzer told viewers.

“Peter Navarro was booked to join me this hour here in The Situation Room, but earlier this morning all of a sudden the White House told us he was no longer available,” the host said.

Fauci for his part had expressed bemusement at finding himself the target of attacks by the White House. Fauci has advised six administrations on disease prevention and control as director of the National Institute of Allergy and Infectious Diseases, and opinion polling has shown him to be one of the US’s more trusted voices on the coronavirus.

“I cannot figure out in my wildest dreams why they would want to do that,” Fauci told The Atlantic. “I think they realise now that that was not a prudent thing to do, because it’s only reflecting negatively on them.”

The attacks of Fauci had prompted senior Republicans to break ranks with the White House to defend him.

“I think it’s absolutely outrageous,” Gov. Larry Hogan of Maryland told an ABC News podcast on Wednesday. “It’s one of the biggest mistakes, I think, that the administration has made throughout this entire coronavirus response, because Dr. Fauci is, in my opinion, the most respected guy in the administration, and the voice of truth and reason throughout this pandemic.”

The White House’s decision to turn on Fauci had apparently been prompted by the expert’s refusal to tone down his warnings about the danger the coronavirus still posed in the US. Fauci was also frank in his assessments of the failure of the US to contain the pandemic.

The White House had for weeks denied Fauci permission to be interviewed by US TV networks, with the expert instead speaking with podcasts and foreign media outlets.

The CBS host Margaret Brennan said earlier in July she had been attempting, without success, to book Fauci to be interviewed on “Face the Nation” for three months.