I travelled from London to Paris on an underwater train, and I'd choose it over a flight in a heartbeat 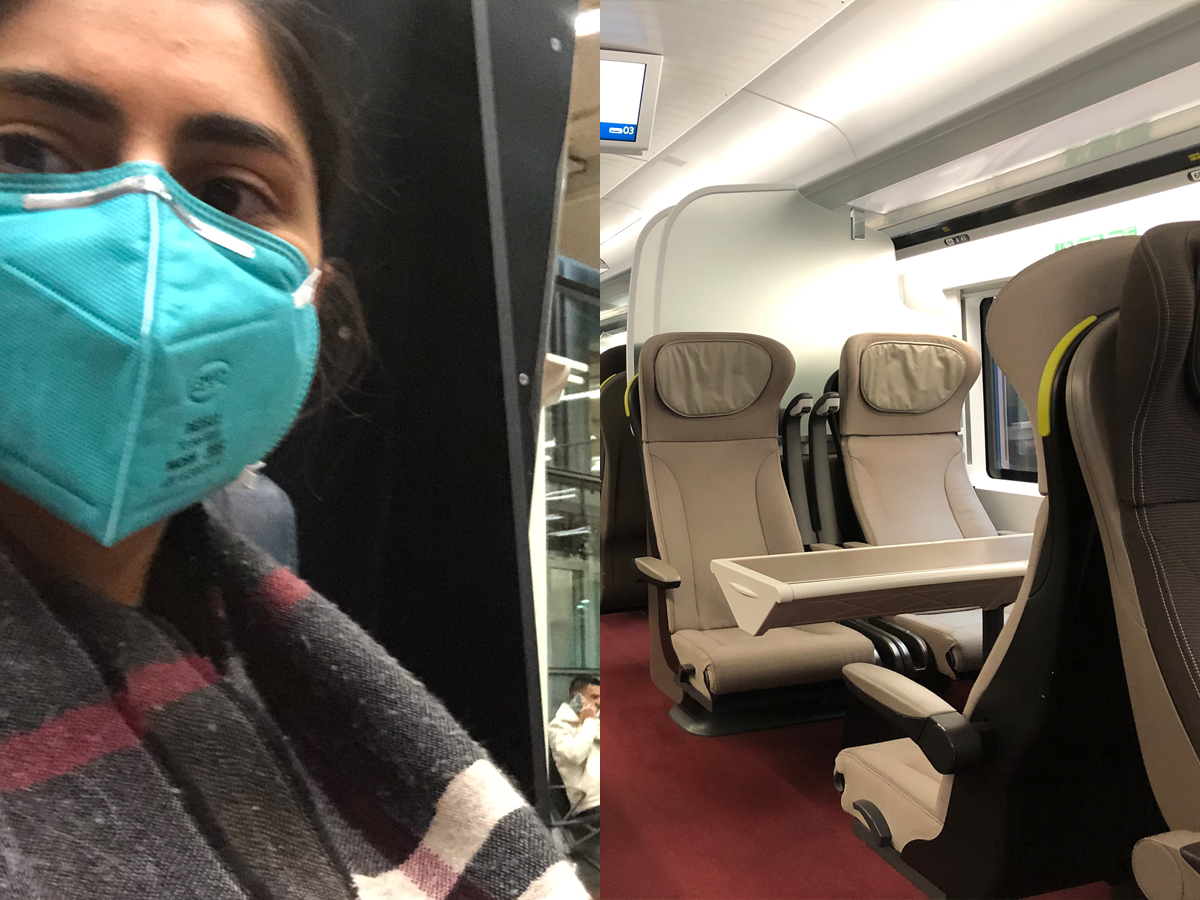 Sara Shah for InsiderI travelled from London to Paris by train.

I think the ease of travelling by train is often overlooked, especially where I’m from in the US. But whenever I travel from the UK to continental Europe, it’s my preferred mode of transportation.

I recently took the Eurotunnel Shuttle train â€” commonly referred to as the “Chunnel” train because it runs through the underwater Channel Tunnel â€” from London to Paris.

Here’s how my trip went and why I’ll always choose the train over a plane:

I started my trip at St. Pancras Station, which I found lovely 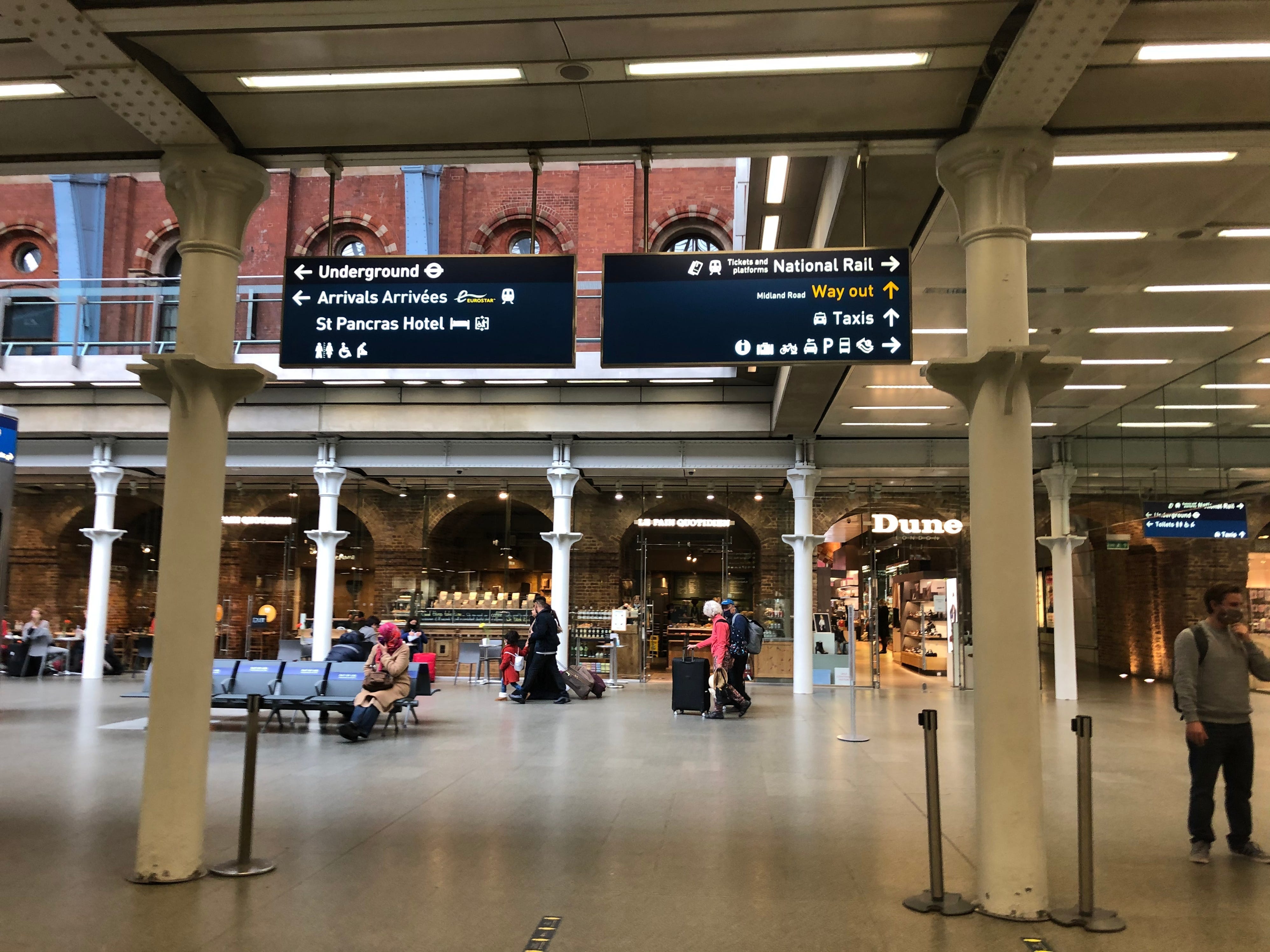 Sara Shah for InsiderThe train picks up at St. Pancras Station in London.

I started my journey at St. Pancras International Train Station in London, which is also connected to Kings Cross Station and the London Underground, making it quick and seamless to get there from anywhere in the city. 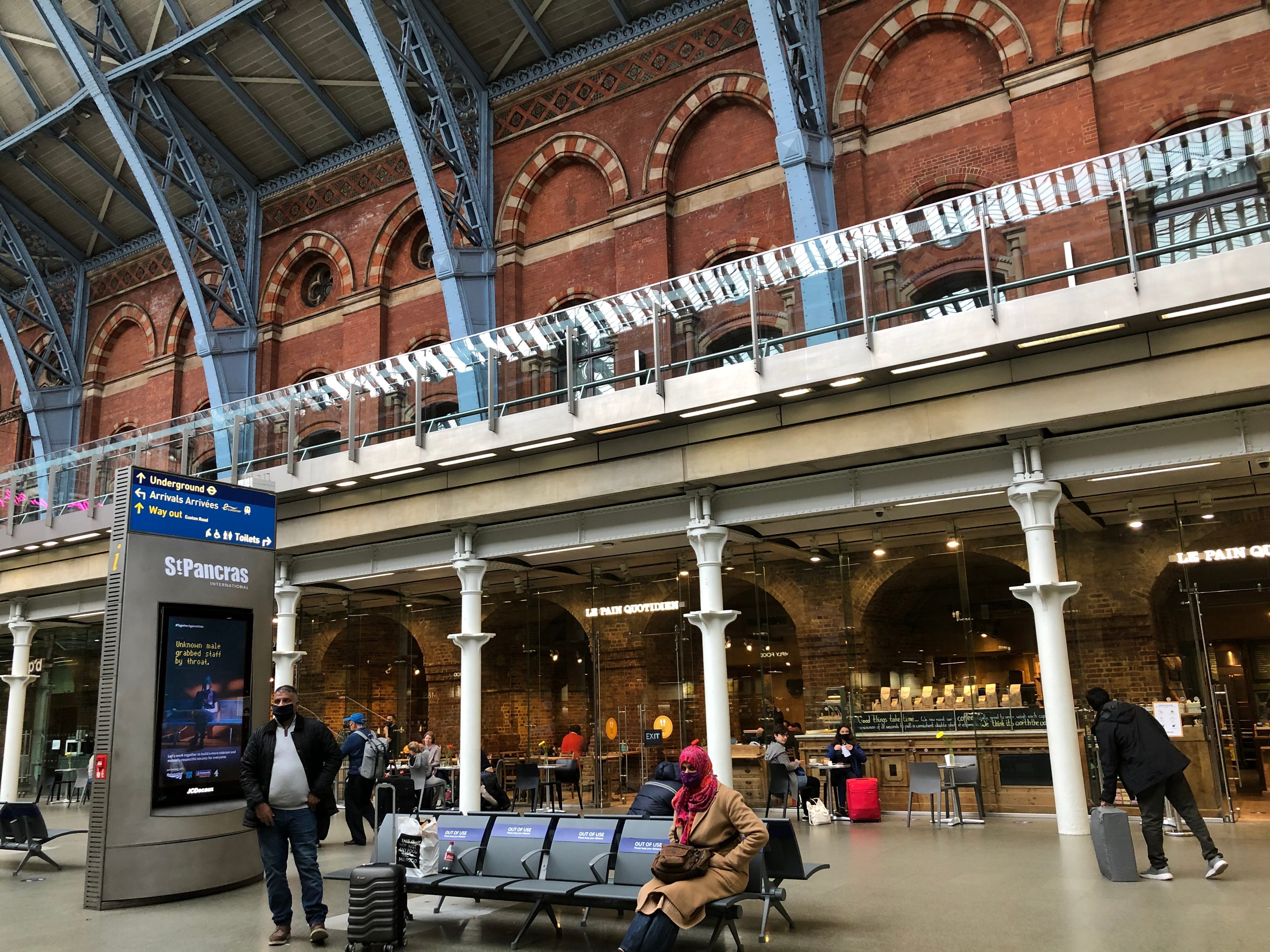 Sara Shah for InsiderThe inside of the station is architecturally interesting.

The station’s architecture is a mix of classic Victorian Gothic styles from the 19th century and modern additions from the early 21st century. 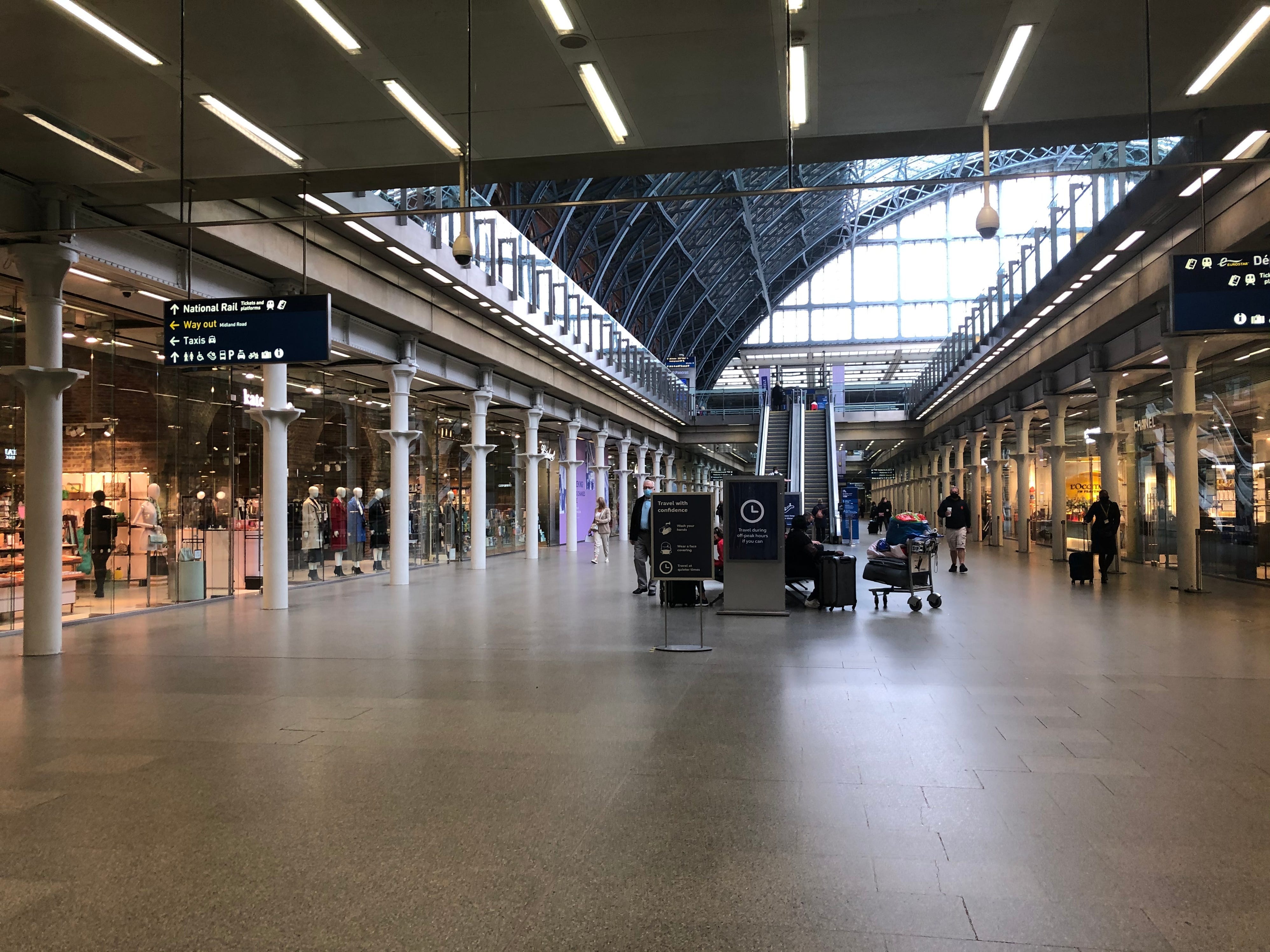 Sara Shah for InsiderSt. Pancras Station was easy to navigate.

The station is well lit, spacious, and easy to navigate, and there were a variety of places to grab a bite to eat before you board the train.

There were also a number of luxury stores, similar to ones you’d expect to find in a duty-free airport terminal. 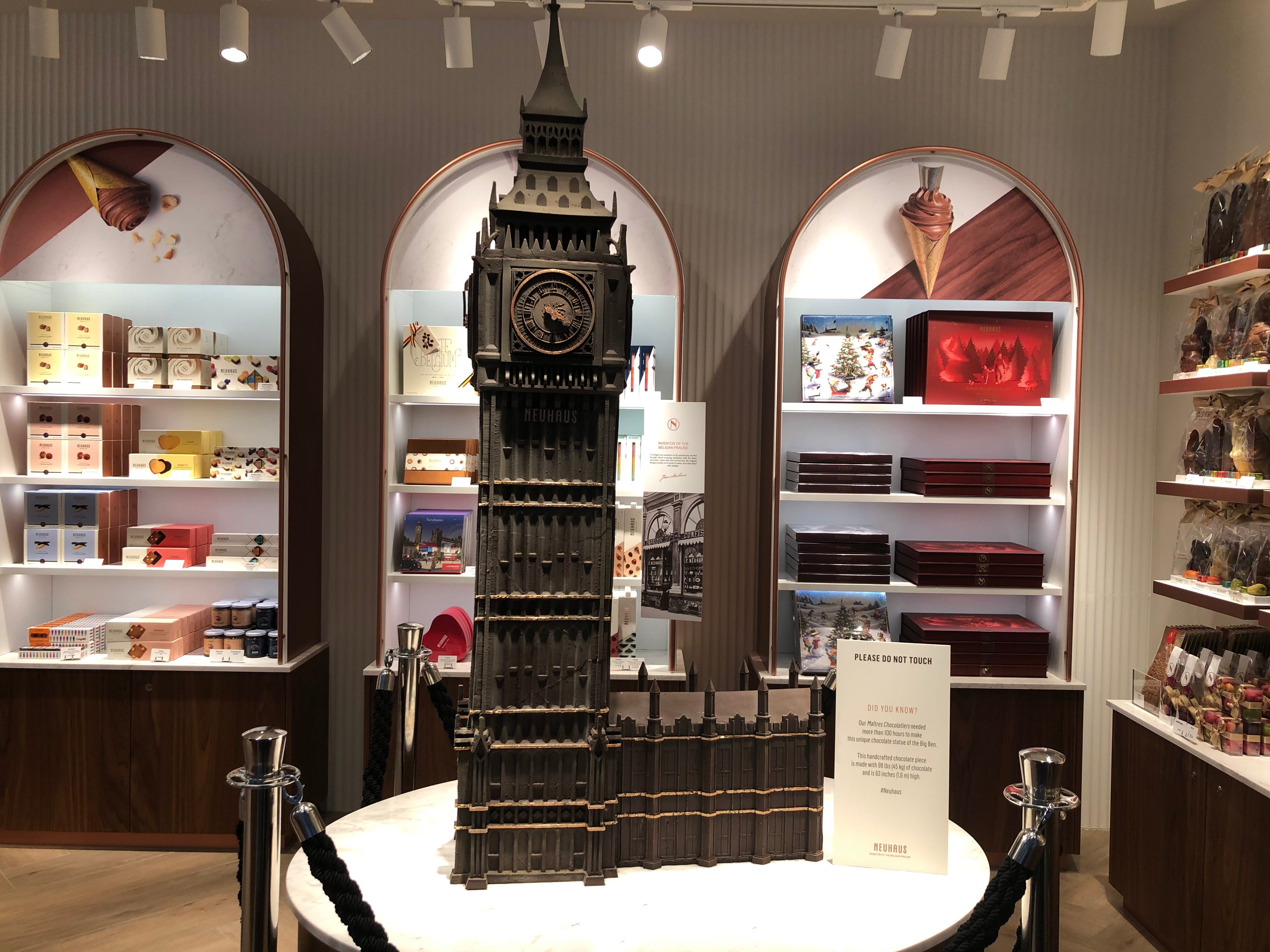 Sara Shah for InsiderThe chocolate in Neuhaus is quite impressive.

If you need a quick gift or a delicious piece of Belgian chocolate before your ride, the station has a Neuhaus.

I’ve lived in Belgium and swear by this chocolatier. I always recommend the “Suzanne,” a piece of dark chocolate with raspberry ganache. 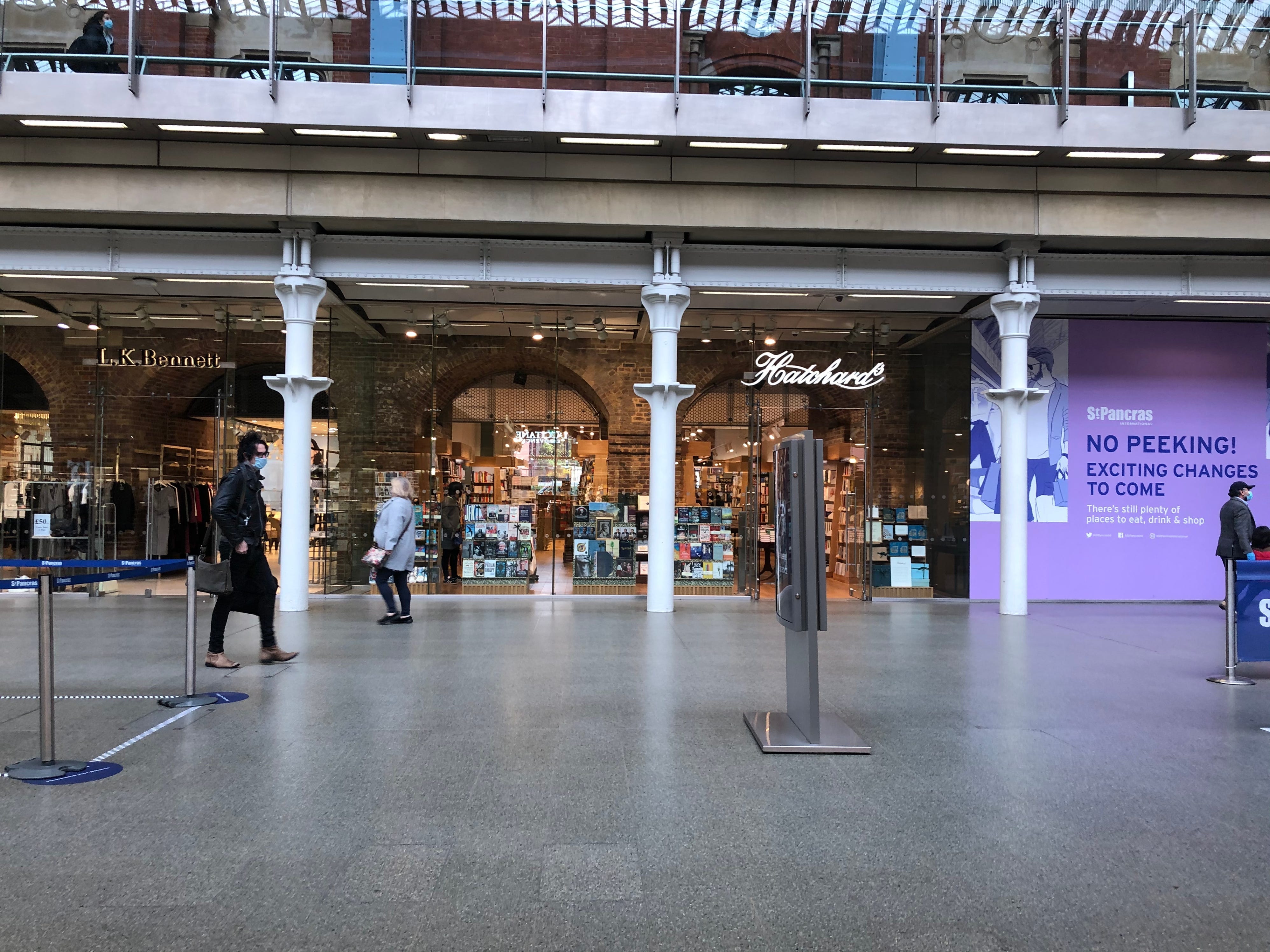 Sara Shah for InsiderThe station has bookstores and newsstands.

If you forgot reading material for the trip, you can swing by Hatchards bookstore, situated right across from the Eurostar check-in area. 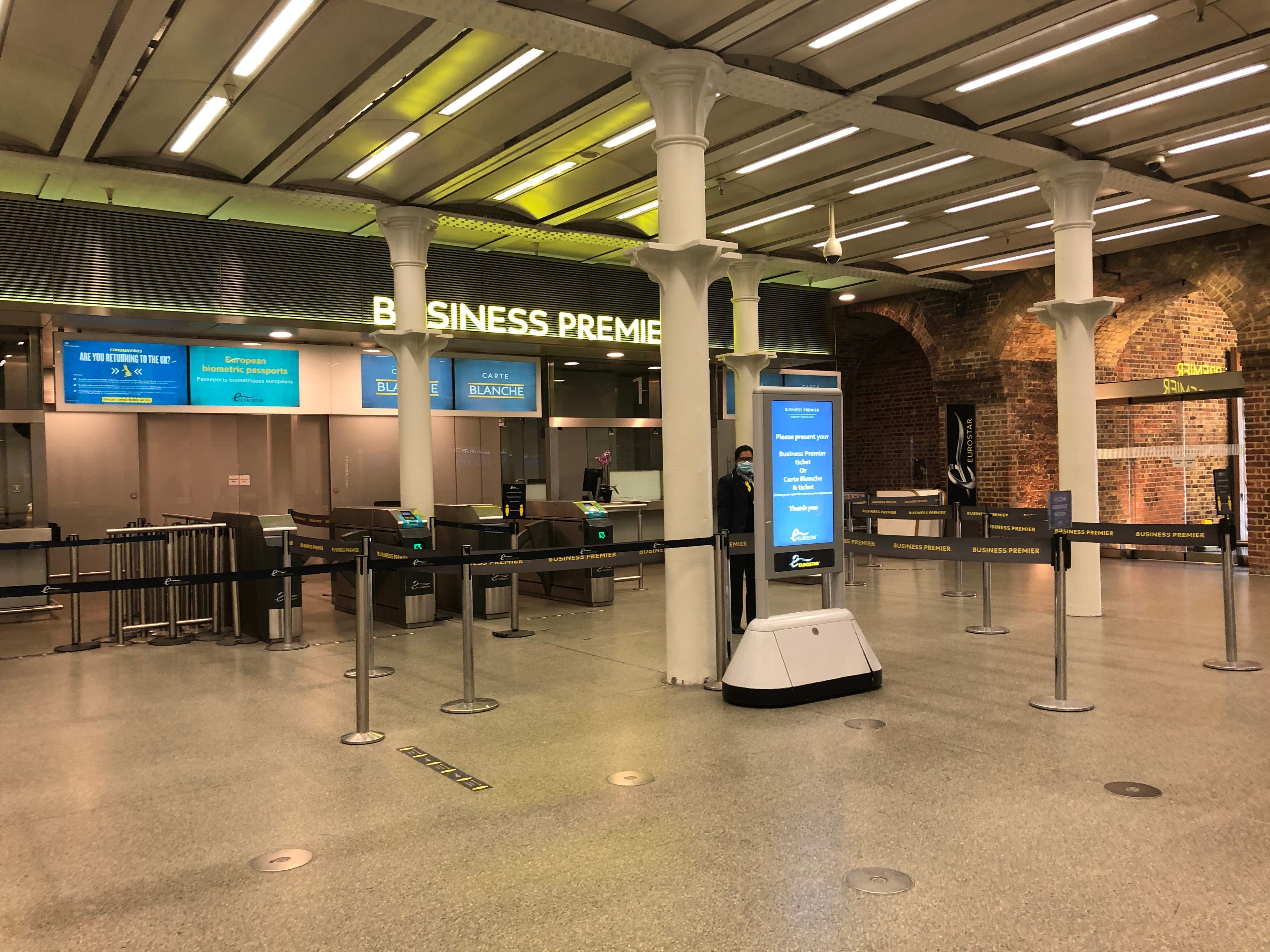 Sara Shah for InsiderPassengers travelling in business class have a separate check-in area.

It’s the highest class available, and it offers the option to check more luggage in addition to a warm meal and spacious seating during the ride. 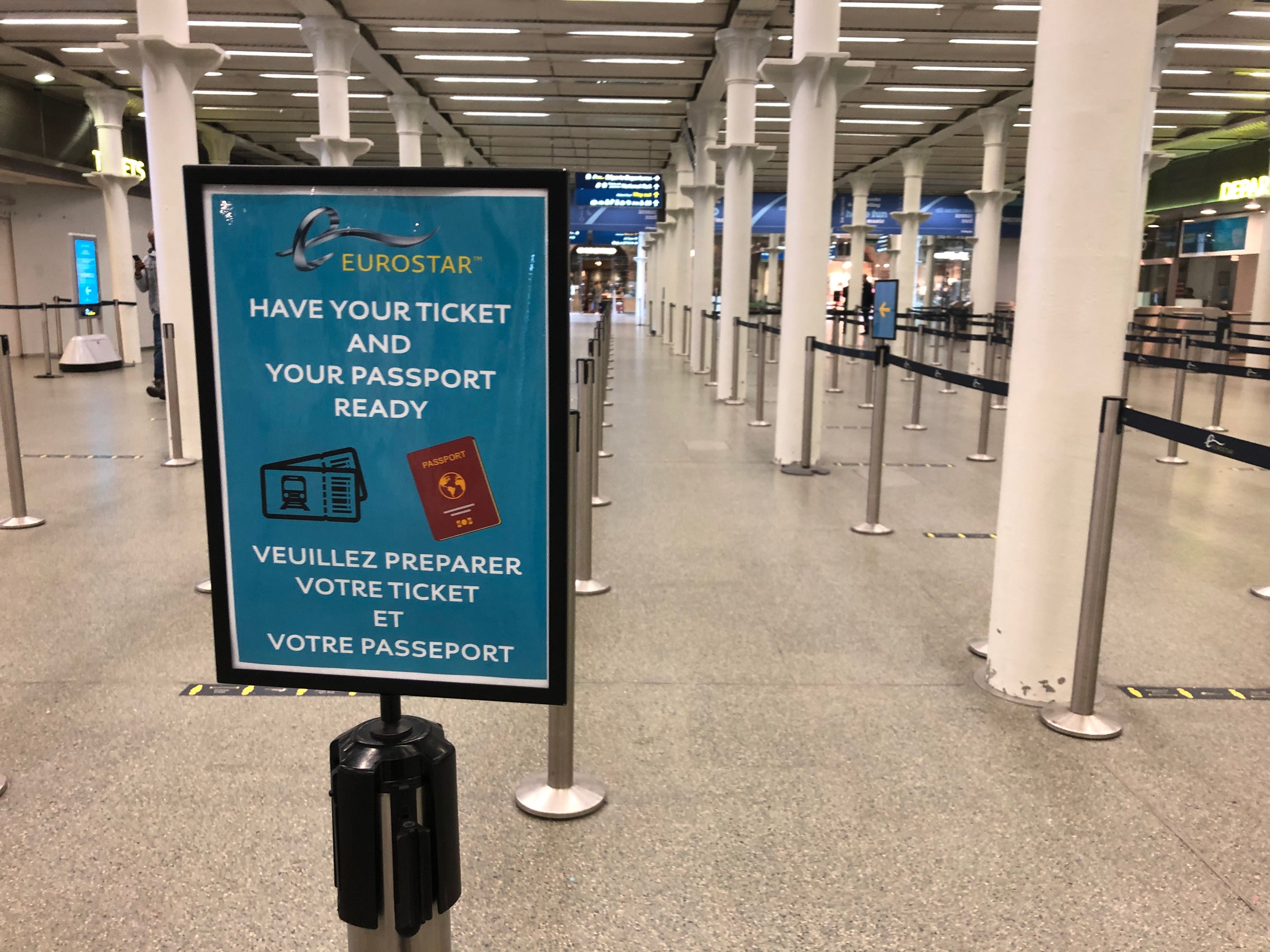 Sara Shah for InsiderIt was easy to read the signs throughout the station.

The check-in signs were all bilingual (in English and French), and all I needed to get on the train was my passport and boarding pass. 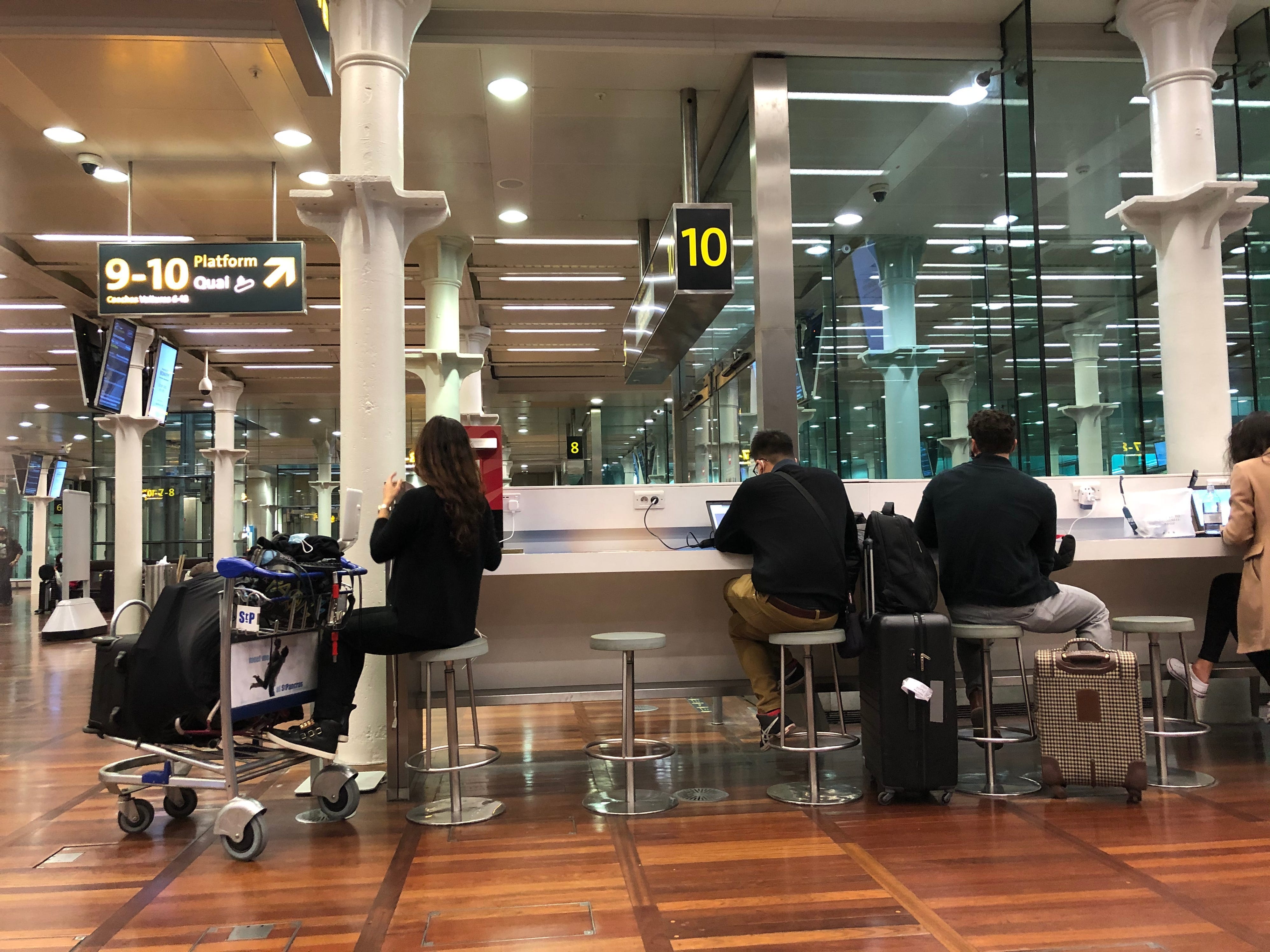 Once I checked in and made it through security, I found a seat in the waiting area so I could relax until the train arrived at the station. 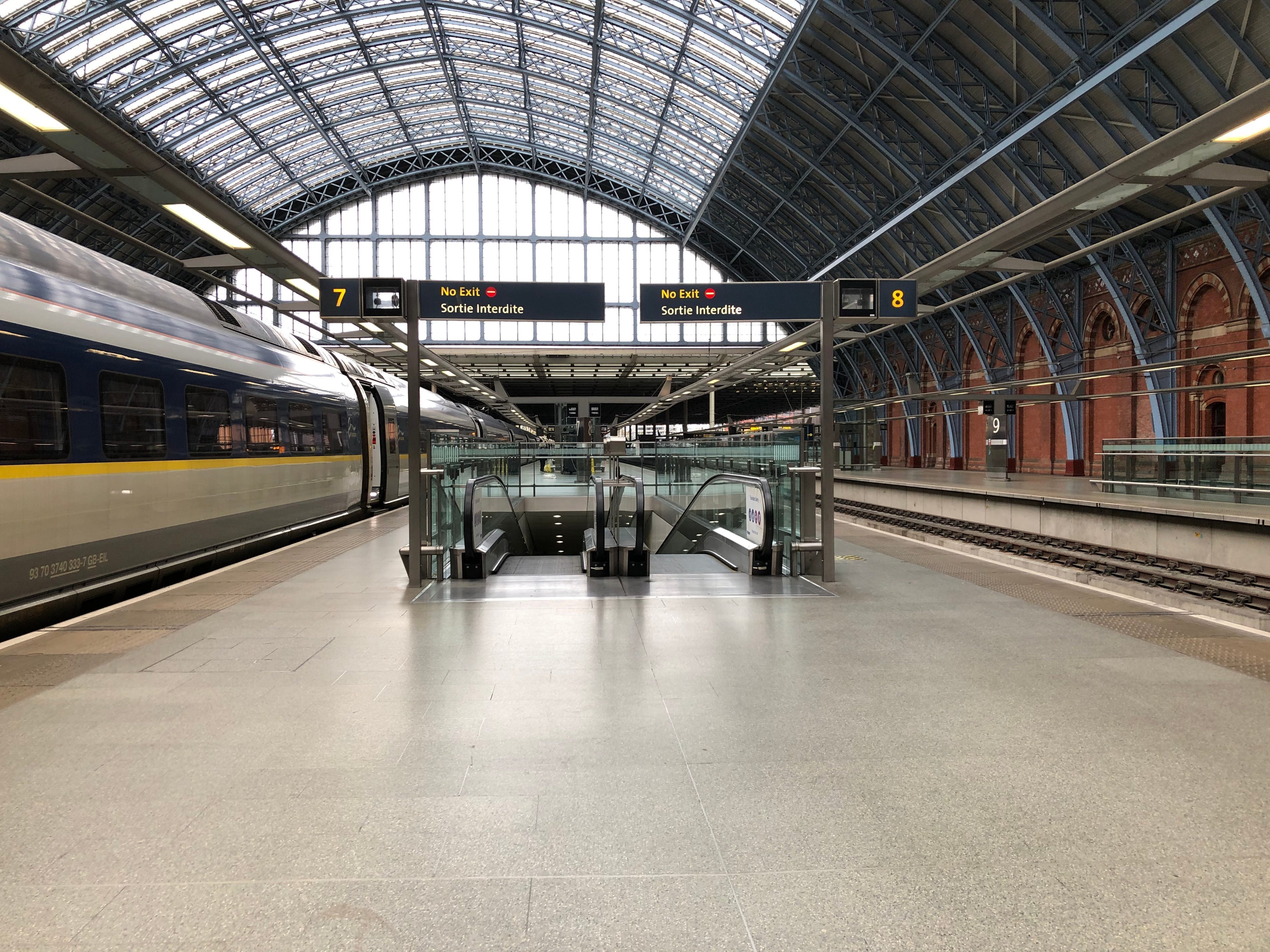 Sara Shah for InsiderThere were multiple ways to get up to the platform.

When the time came, it was easy to get to the platform (even with luggage) via the mini escalators. And there was also an elevator for passengers with injuries or disabilities. 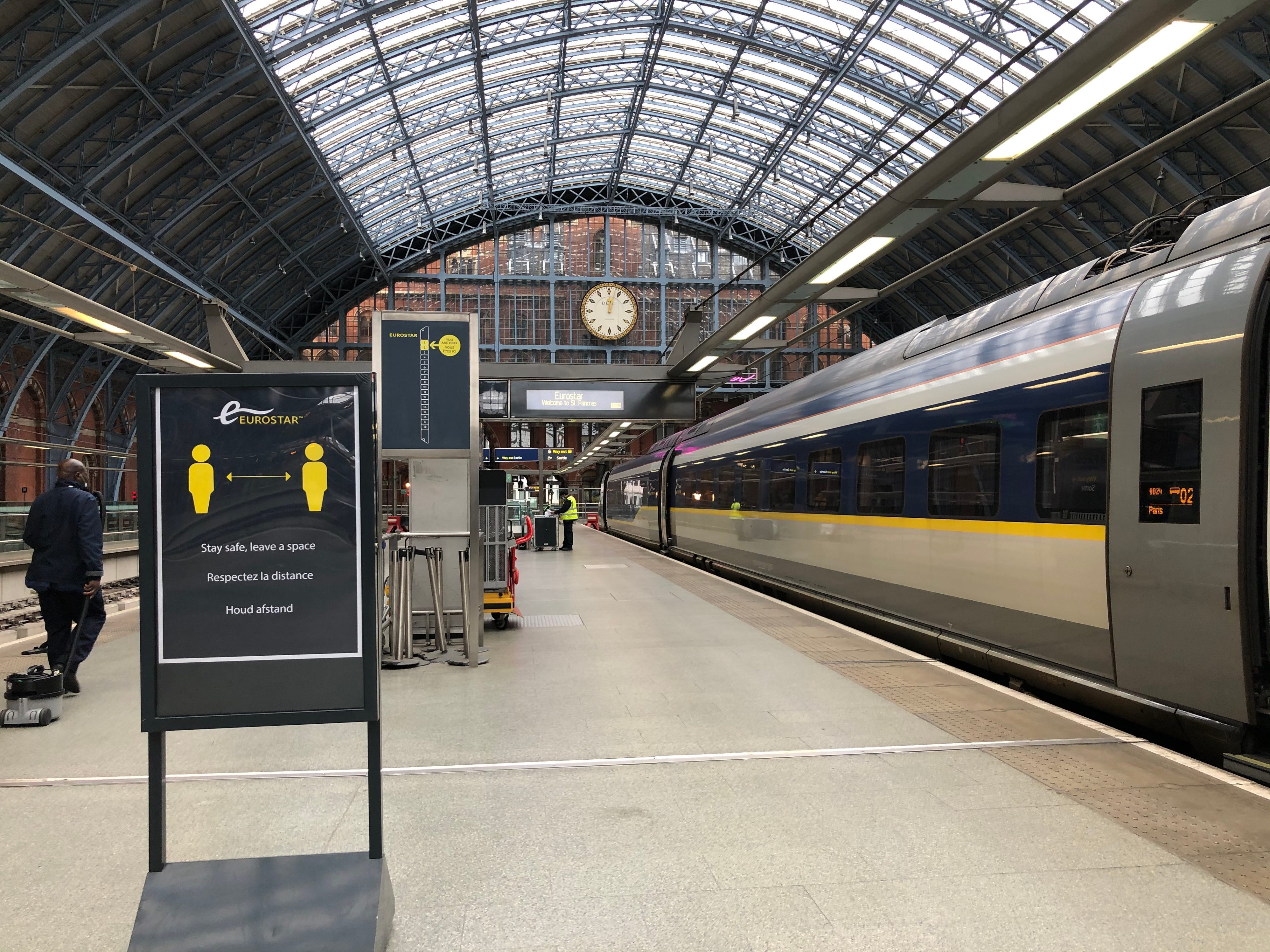 Sara Shah for InsiderThe station was enforcing social distancing when I was there.

Given that I travelled amid the coronavirus pandemic, there were plenty of signs encouraging social distancing throughout the platform. 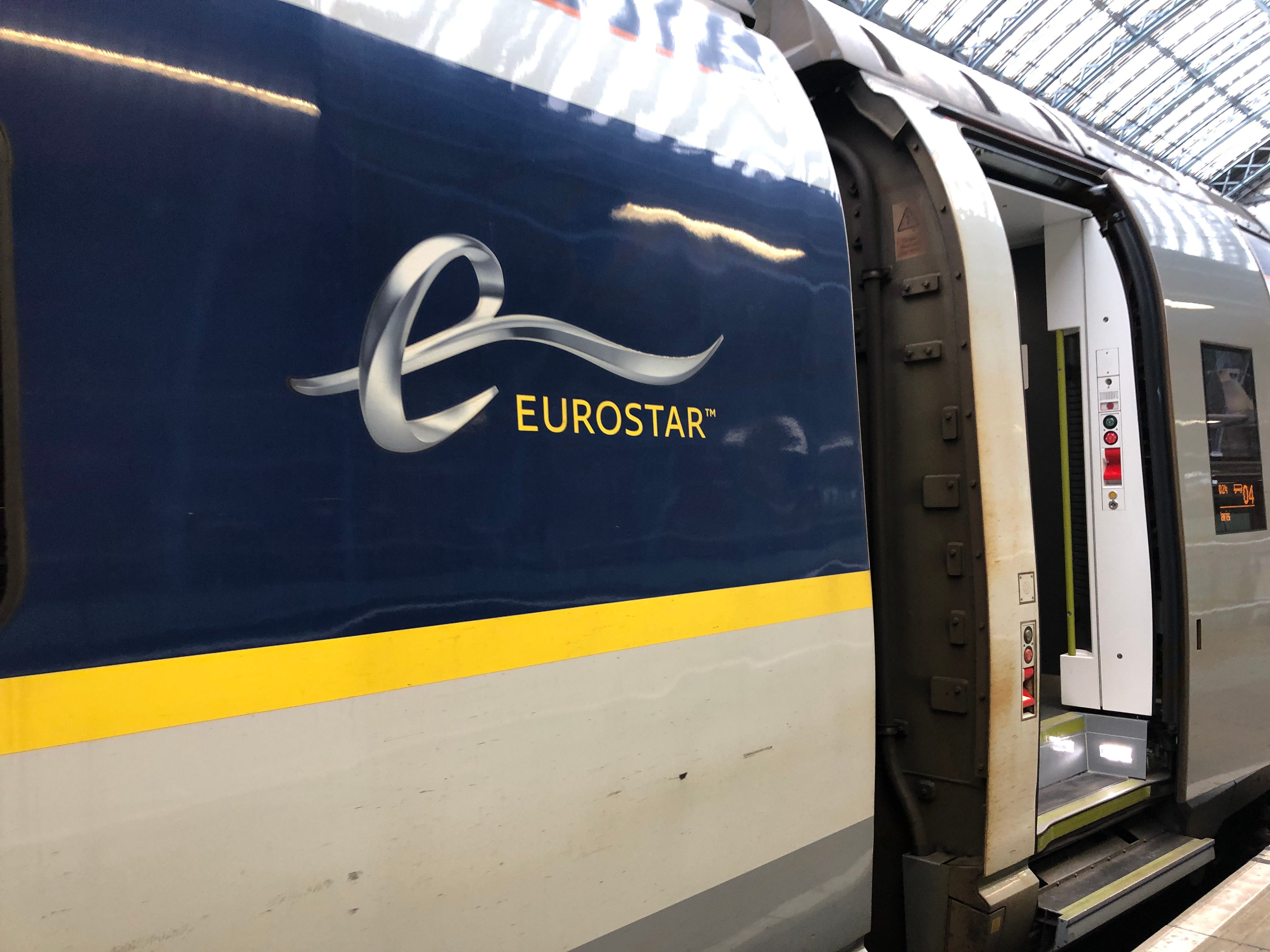 Sara Shah for InsiderI prefer boarding a train to a plane.

After about an hour of waiting, I was able to get on the train.

I found it to be much easier than boarding a plane and much quicker.

My cabin was spacious and clean, and the train offered entertainment and food 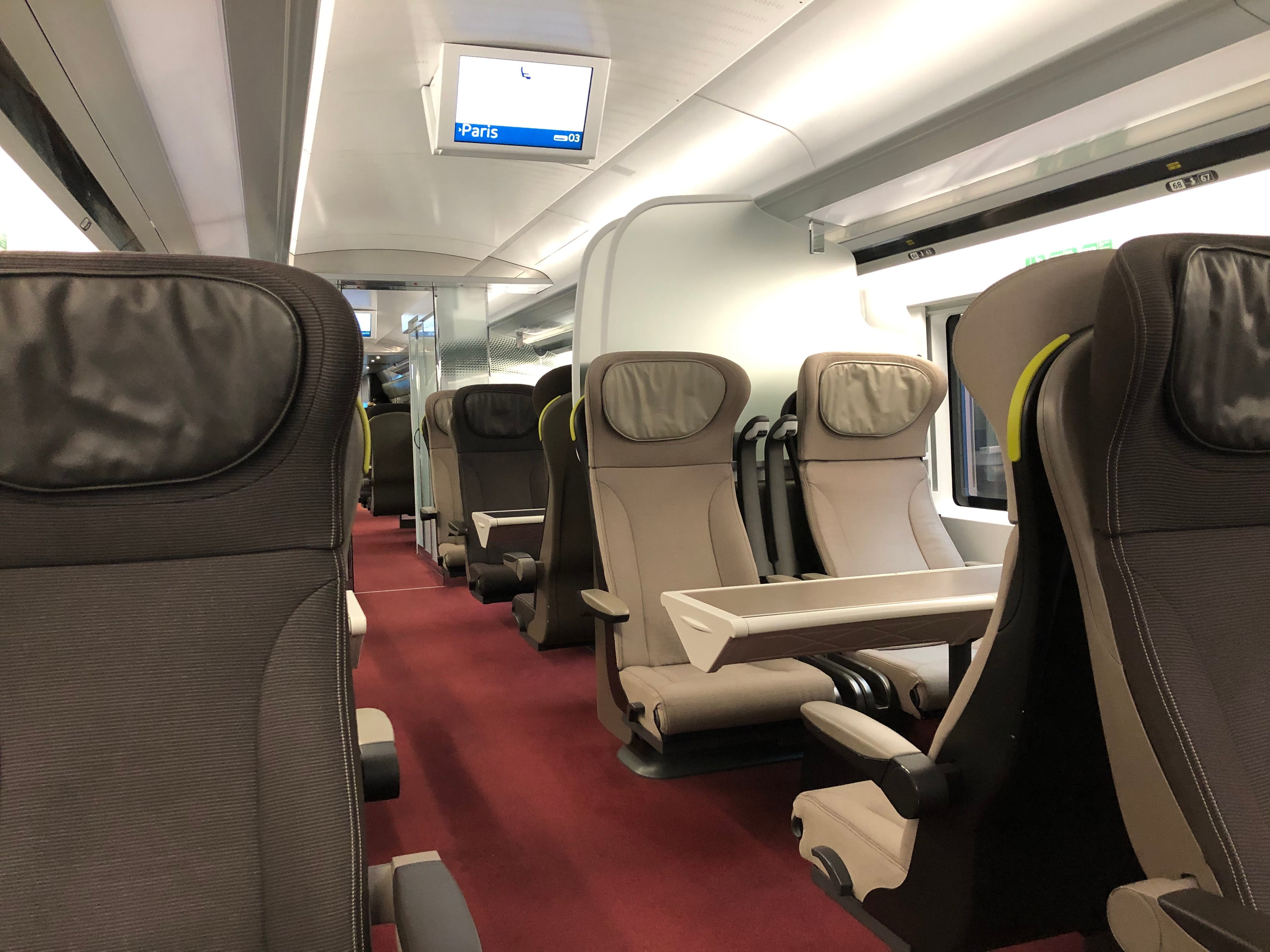 Sara Shah for InsiderMy cabin was large and comfortable.

I opted for a Premium Economy ticket, which is one level above economy and one level below business class.

Based on the signs, I was actually in a spacious Business Premier cabin, it just didn’t offer the same hot meal and extra luggage options available to passengers at that level. 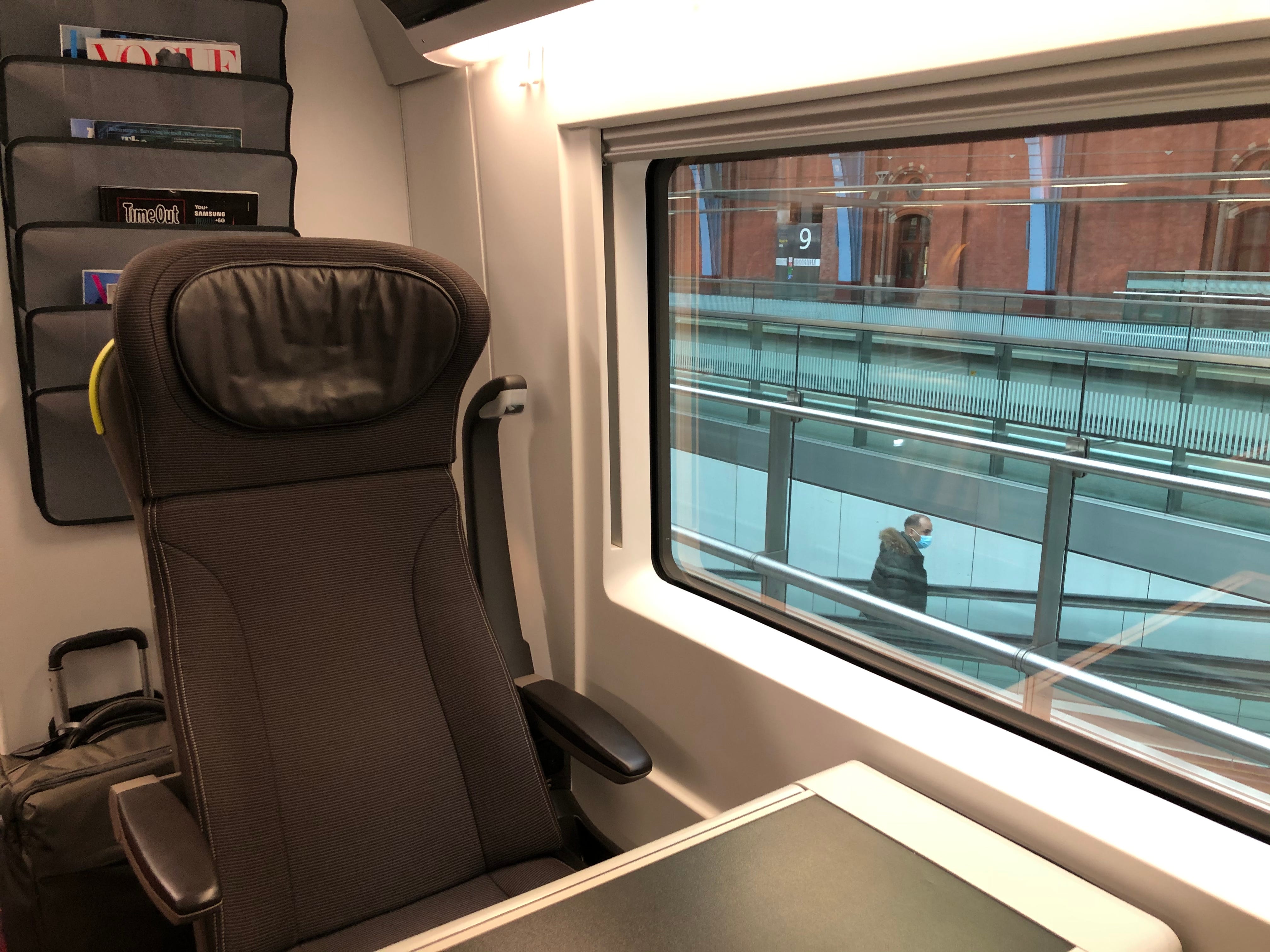 Sara Shah for InsiderI was able to snag a window seat.

I purposely chose a solo seat by the window to help with social distancing.

I also wanted to be able to see the countryside around me. The actual underwater tunnel part of the ride is nothing special â€” basically the inside of a normal subway tunnel â€” but I was still hoping to enjoy a few views during the other parts of the journey.

No one was seated across from me due to Eurostar’s new social-distancing policy. 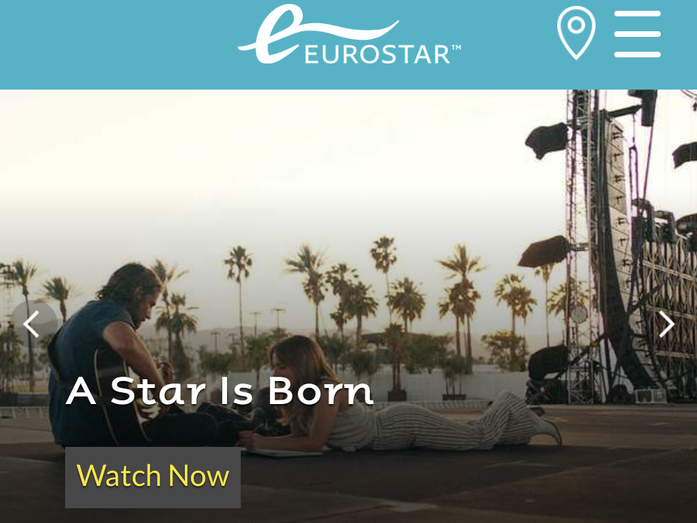 Since the tunnel part of the ride offers no visual stimulation, I took a look at what Eurostar offers in terms of entertainment.

During the ride, you can stream a variety of TV shows and movies via the onboard website. 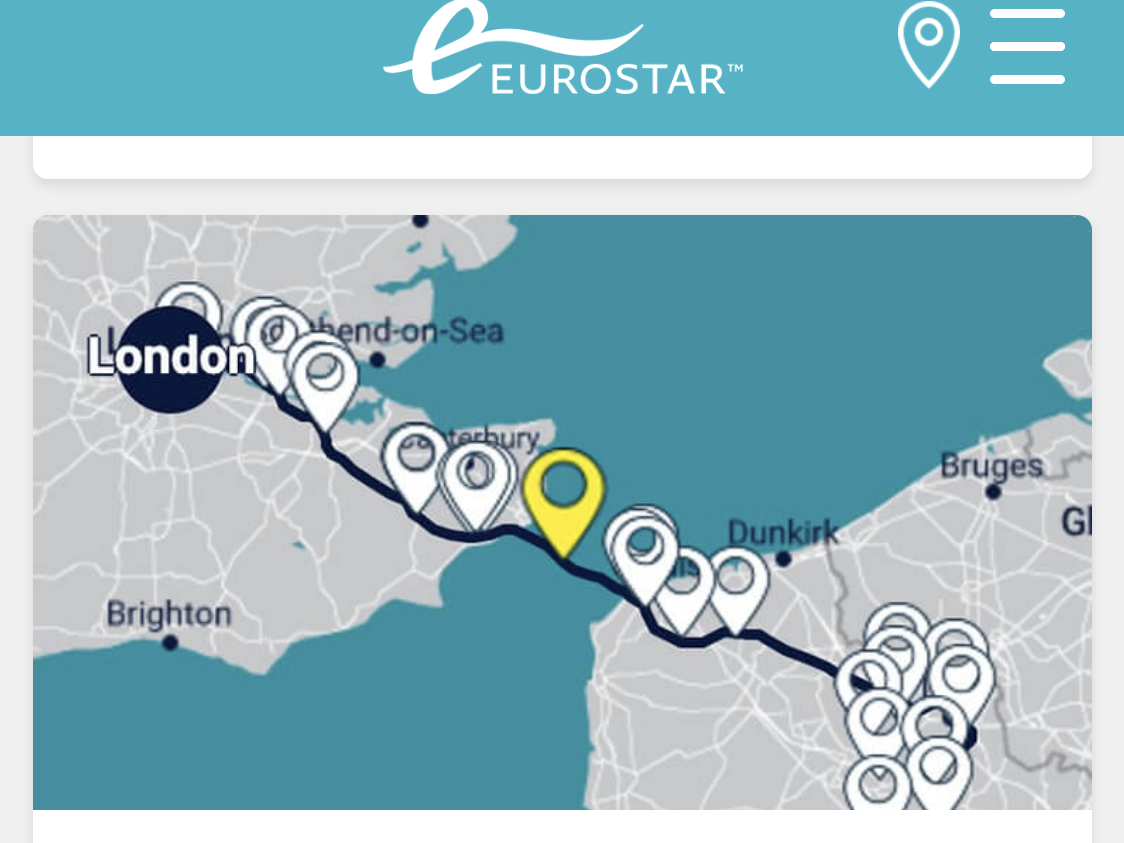 Sara Shah for InsiderThe map tracked the journey in real time — when there was internet connection.

You can also watch a live map of the journey as it unfolds, which is handy, but the Wi-Fi was spotty under the tunnel, which kind of defeated the point. 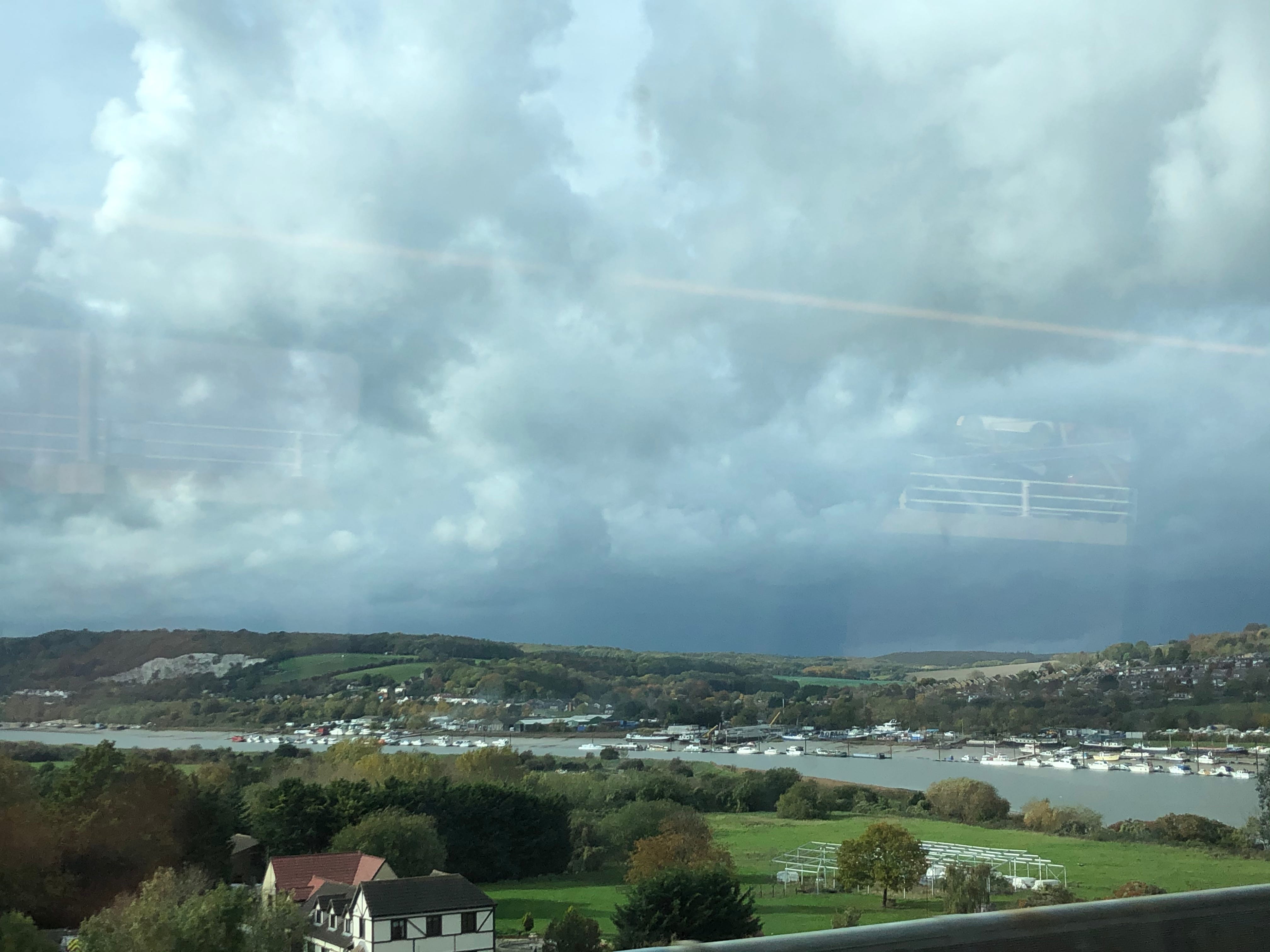 Sara Shah for InsiderThere were some beautiful views before the tunnel.

The scenery just outside of London was pretty average at first, but eventually, there were some more idyllic views.

I was grateful I opted for a window seat. The glimpses of the countryside were well worth it. 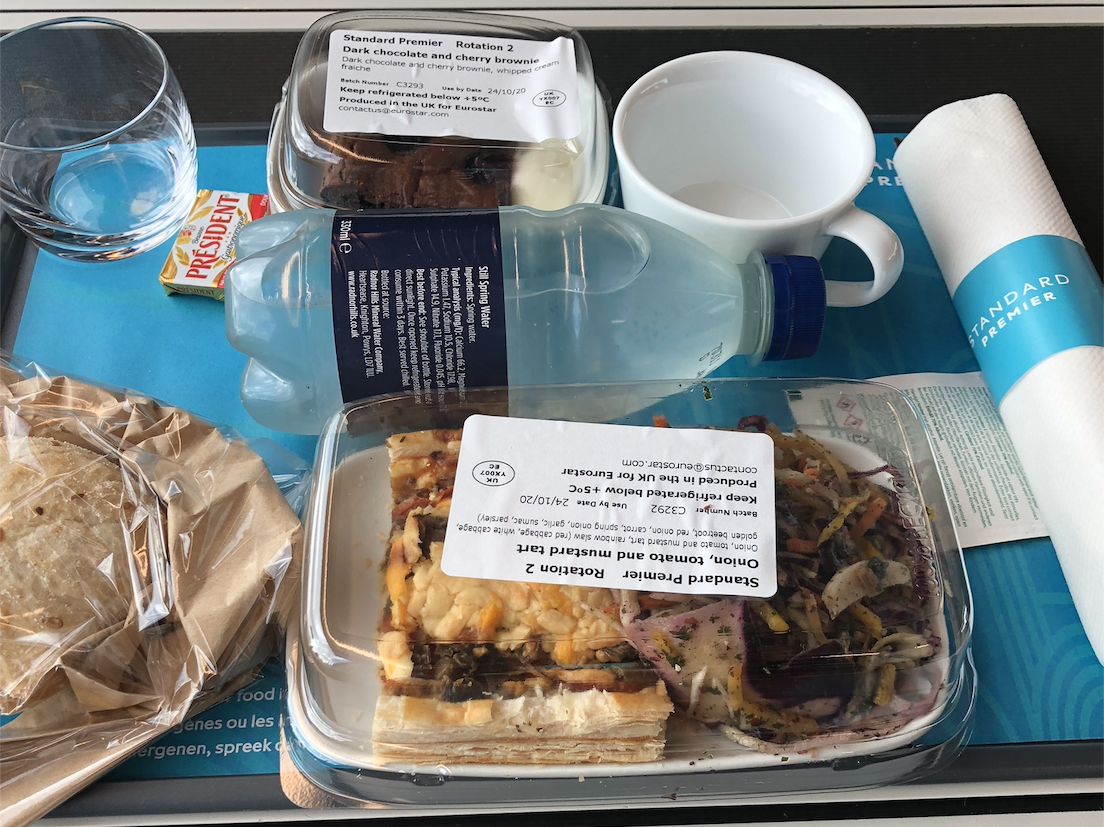 Sara Shah for InsiderMy meal was cold, but business passengers get a warm one.

When I checked in online 48 hours beforehand, I was able to choose my dietary preferences for the onboard meal.

I opted for a vegetarian meal, which included a cold vegetable pastry with cheese on top and an onion salad on the side. 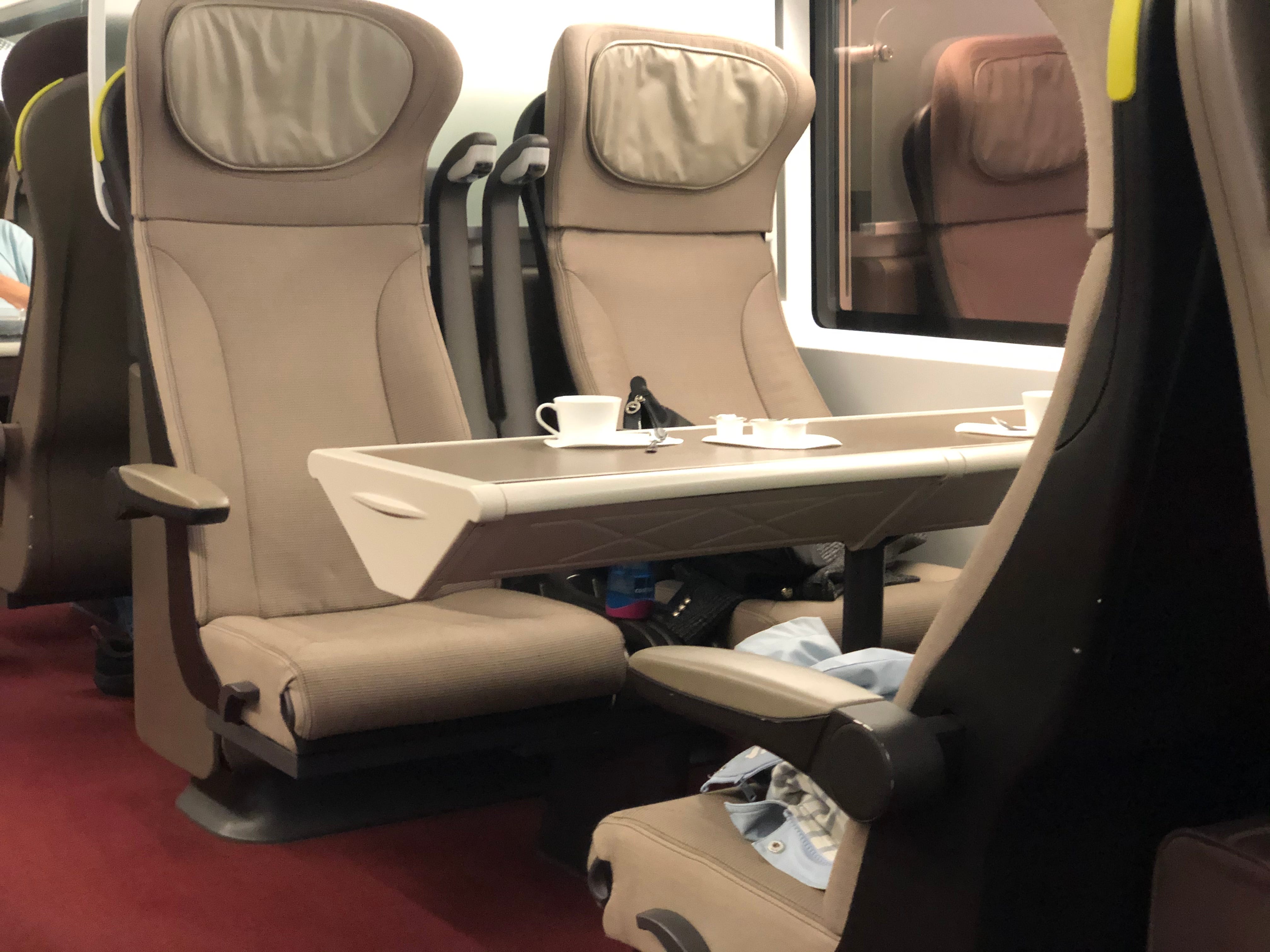 Sara Shah for InsiderThe drinks were served after the meal.

After the light meal, tea and coffee were served to passengers throughout the cabin. This was a wonderful treat since I was still jet-lagged from my trip from the US to London. 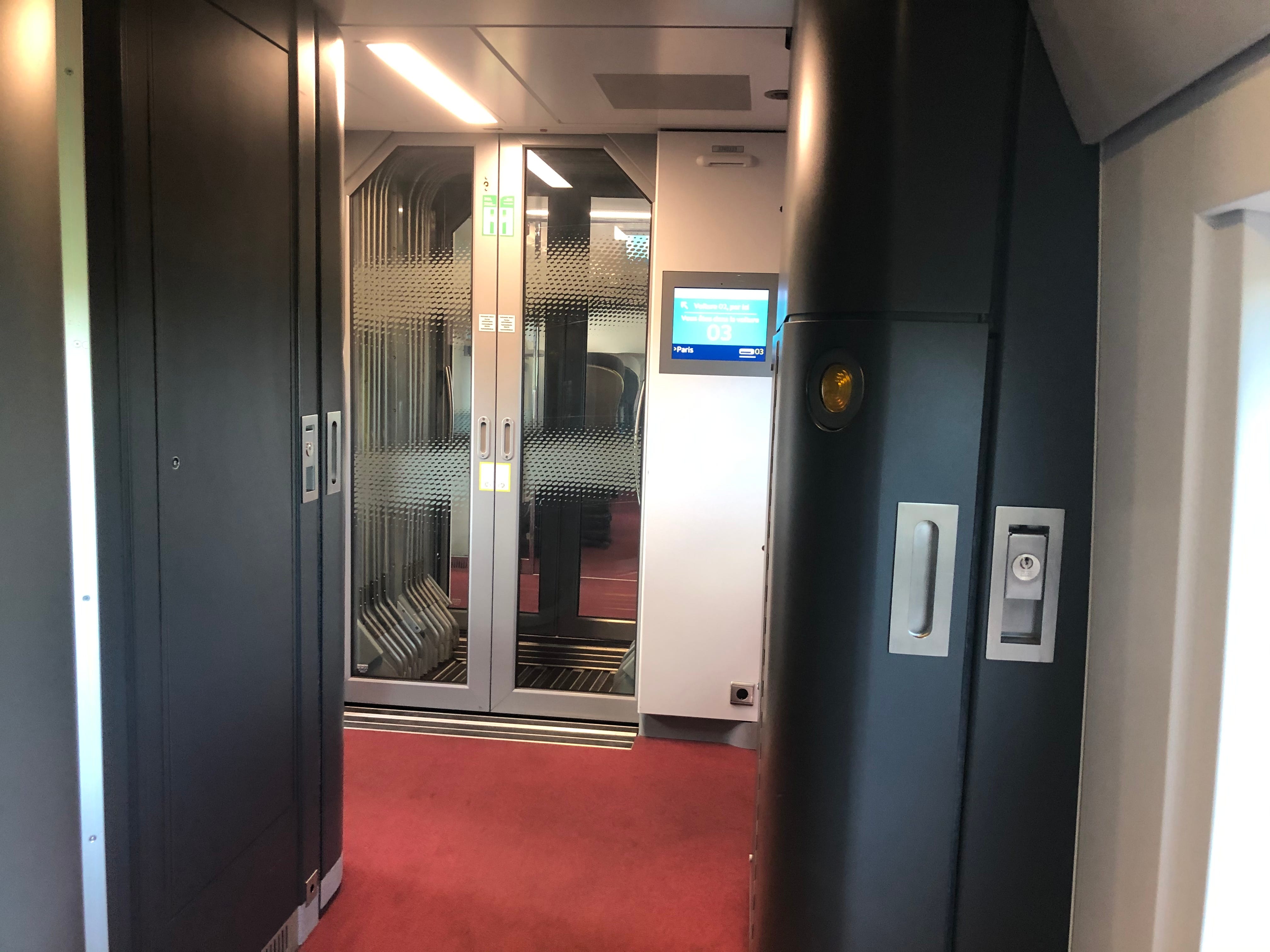 Sara Shah for InsiderThe cabin was easy to navigate during the ride.

After eating, I made my way through the cabin to check out what else it had to offer.

The train’s design felt sleek and clean in comparison to others I’ve travelled on in Europe. 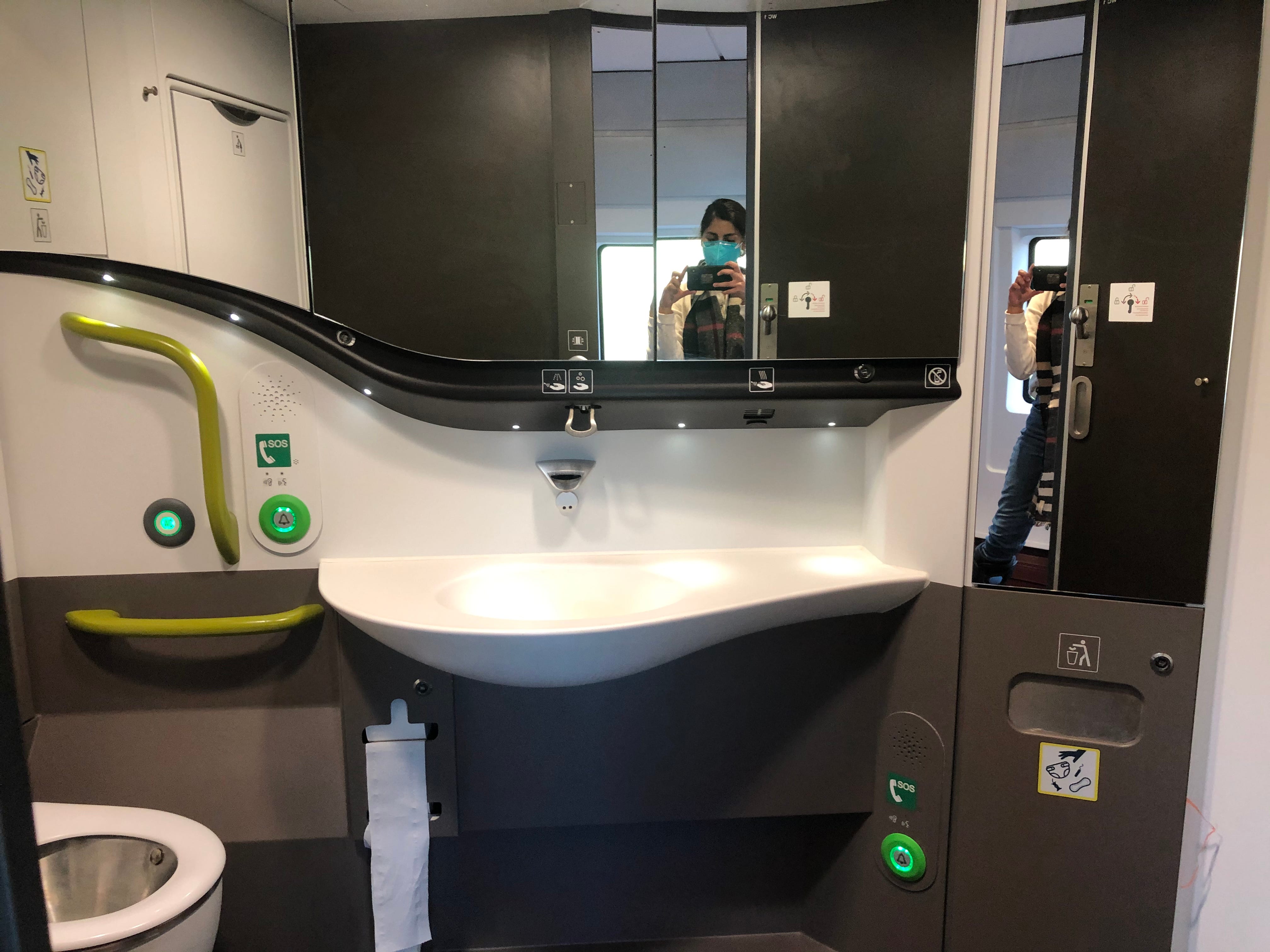 Sara Shah for InsiderI found the bathrooms to be spacious and clean.

My cabin had a handicapped-accessible bathroom that offered a good amount of space to move around.

If you ever have to change while travelling into Paris, this bathroom definitely offered enough space for a wardrobe switch. 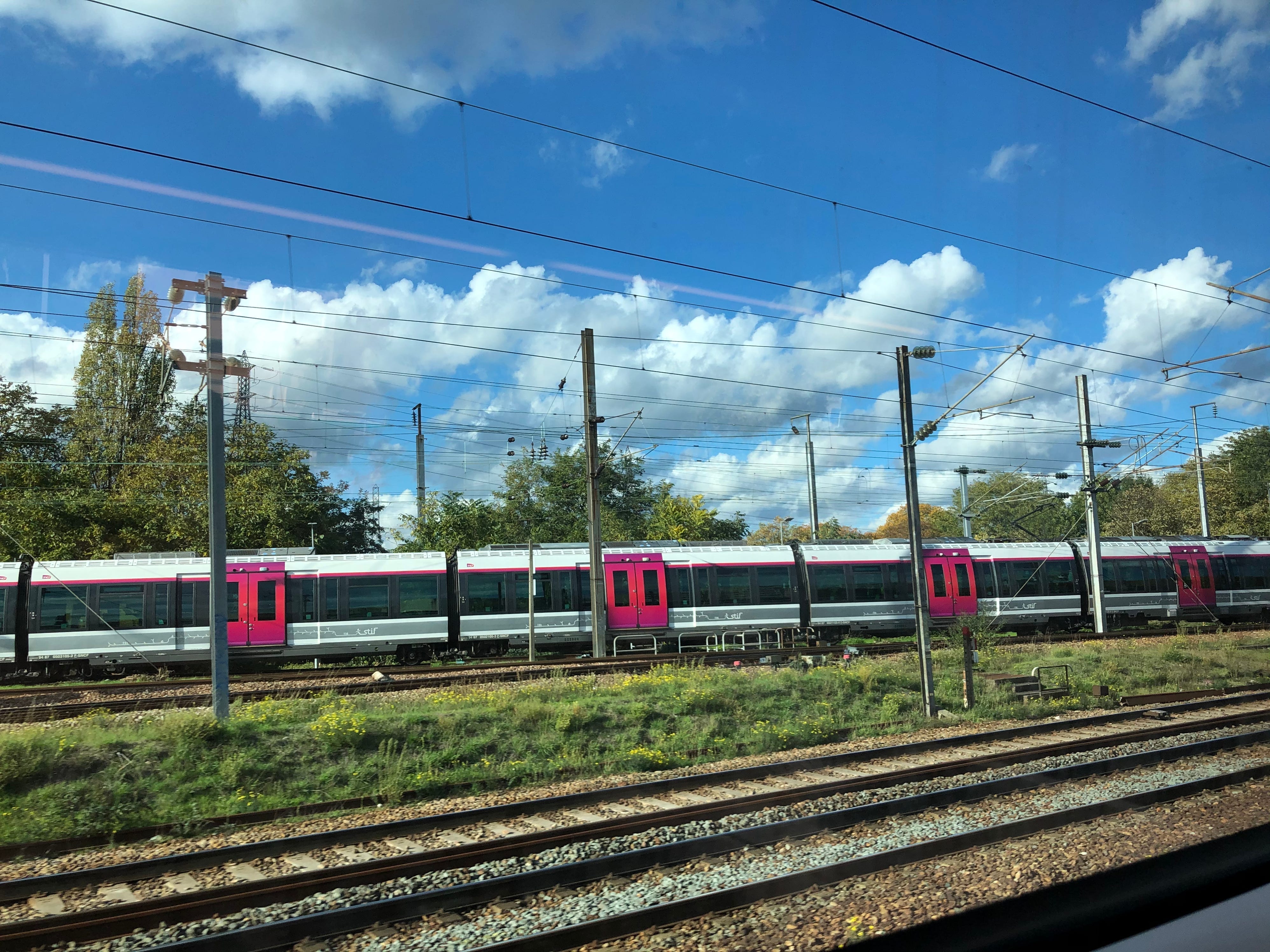 Sara Shah for InsiderI only had a short glimpse of the French countryside.

We reemerged from the brief time in the underwater tunnel â€” which only lasted about 35 minutes of the entire two-hour trip â€” and I was finally able to see bits of quaint French towns passing me by before we pulled into Gare du Nord. 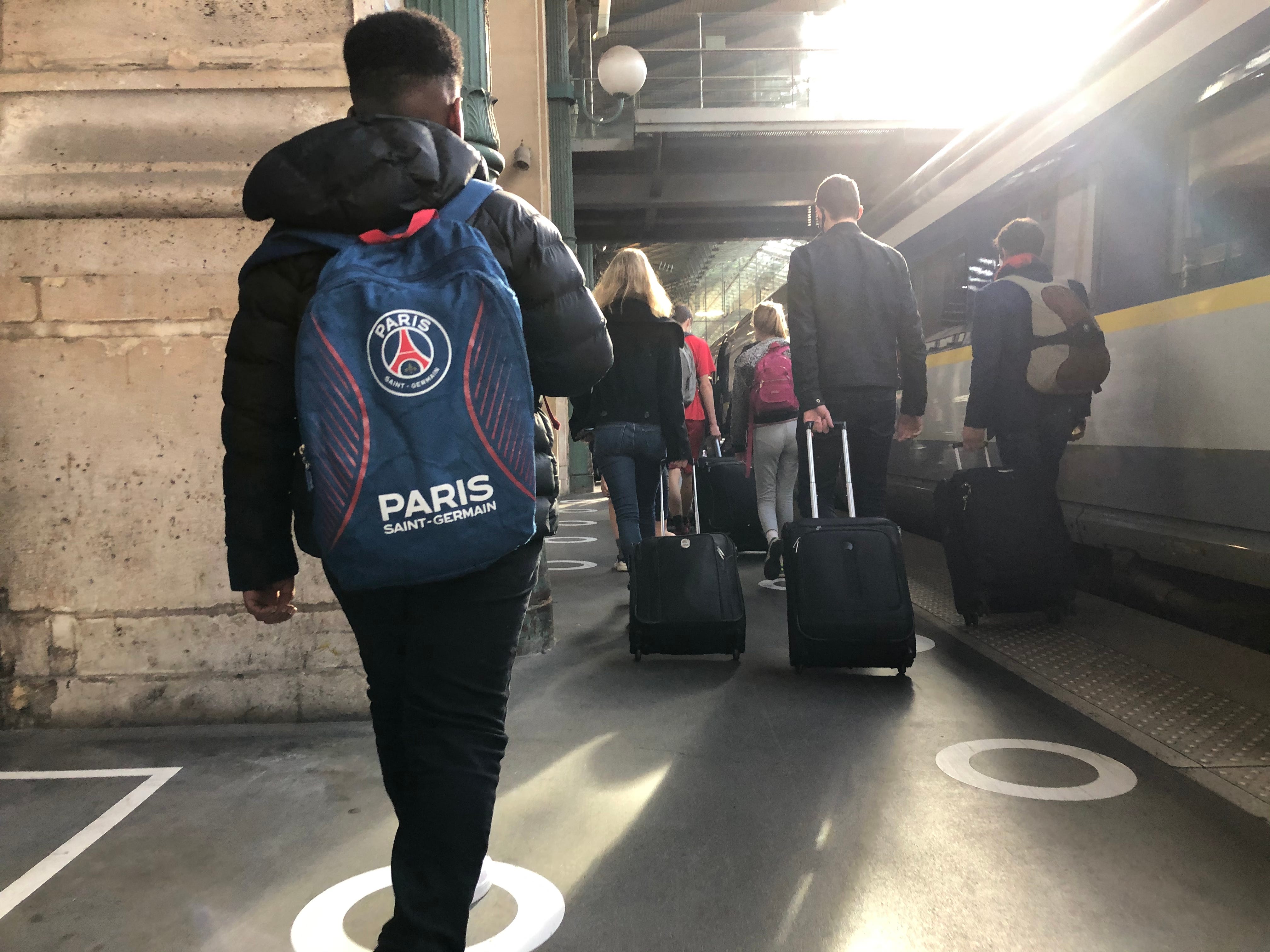 Sara Shah for InsiderGare du Nord was much busier than St. Pancras.

The platform in Paris felt a lot more crowded than the one in London.

When I hopped off the train with my bag, I quickly found myself in the bustle of the terminal. 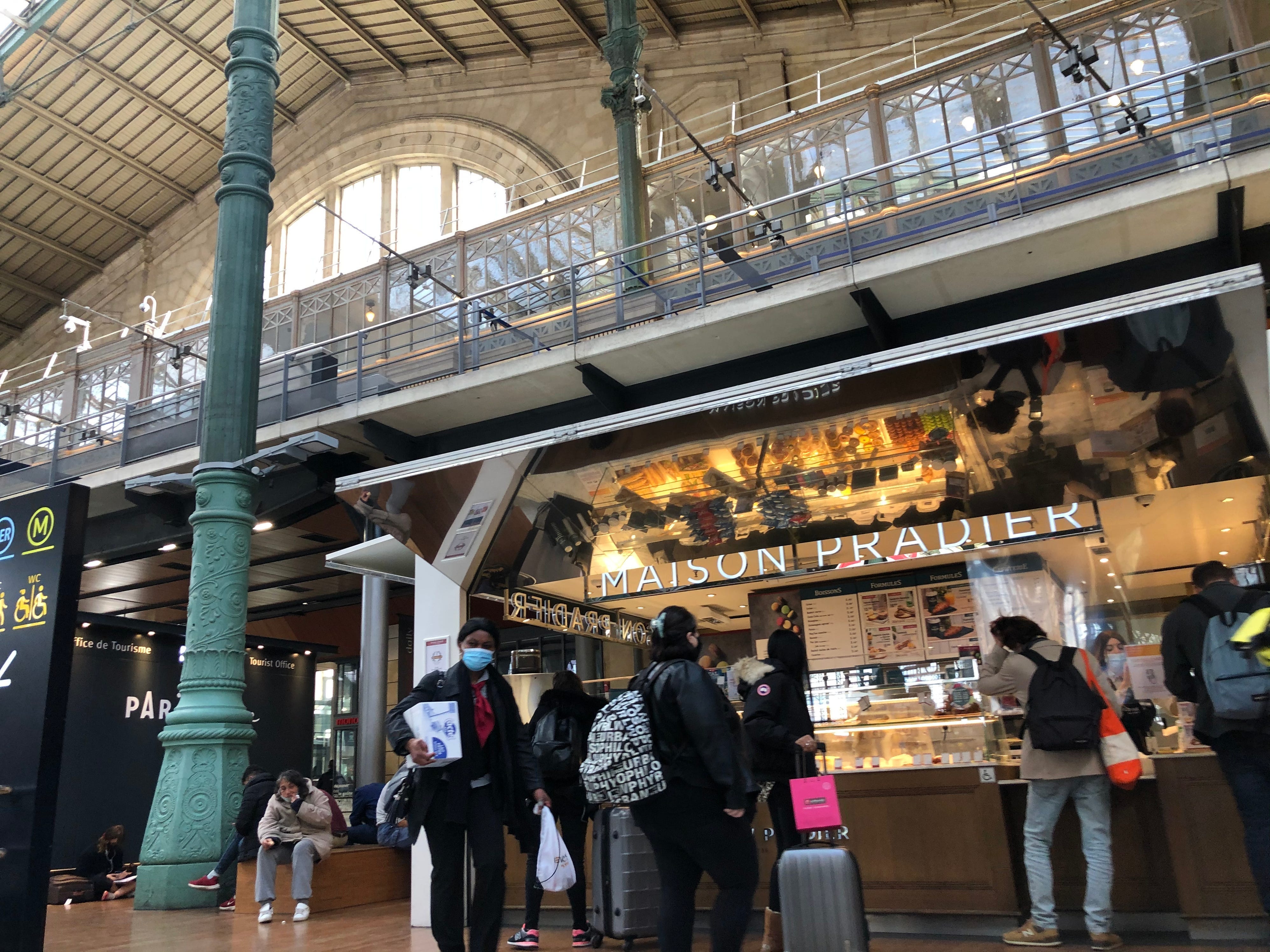 Sara Shah for InsiderThis station wasn’t as charming, but it did offer shopping and dining.

The inside of Gare du Nord Station was a lot smaller and less impressive than London’s St. Pancras. However, it still offered spots to grab a quick bite to eat and smaller newsstands for books and reading material. 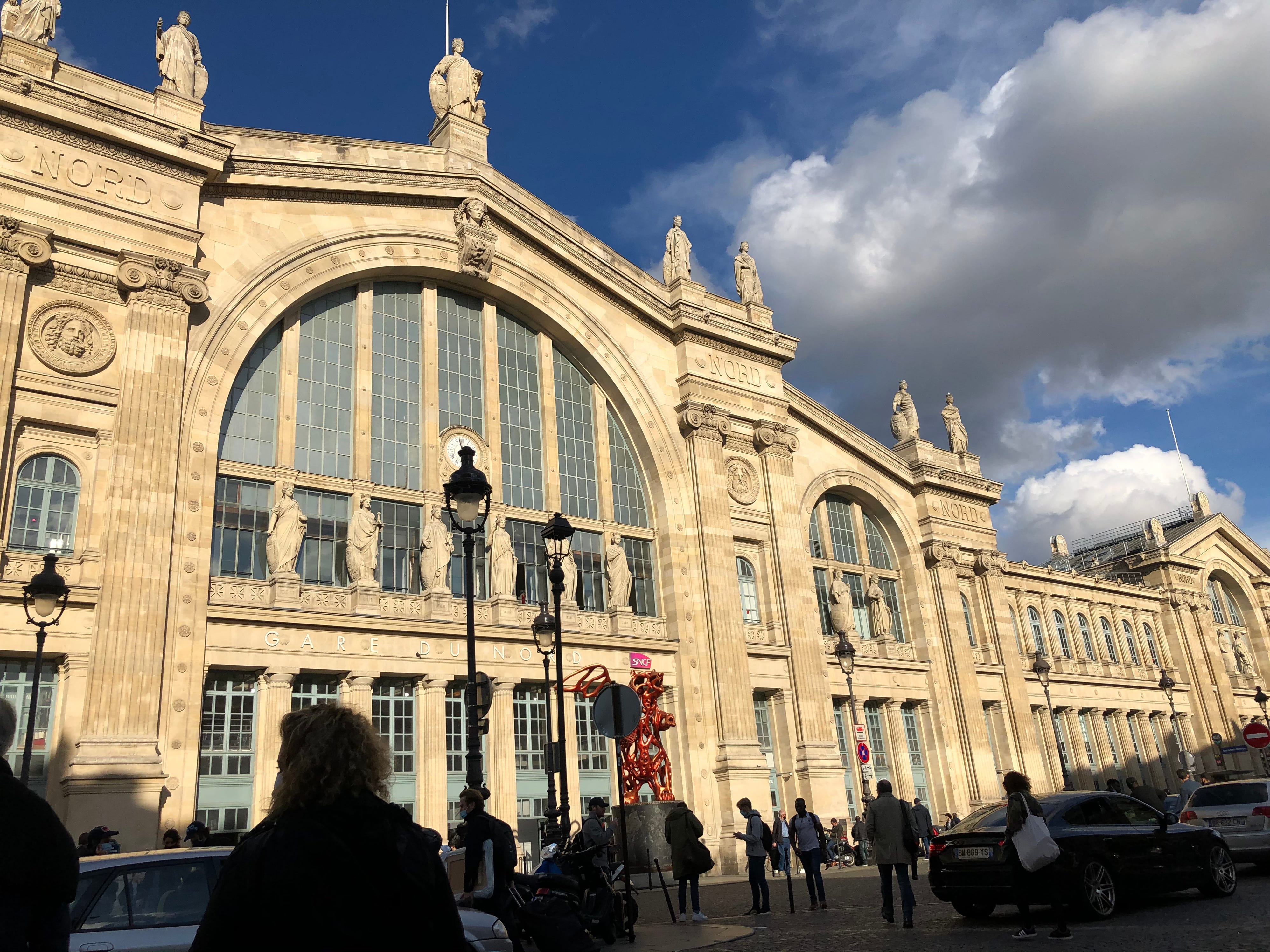 Sara Shah for InsiderGare du Nord is located in the 10th arrondissement in Paris.

Finding an Uber outside of Gare du Nord is difficult unless you walk a bit further away from the station. So if you’d rather be picked up right outside, you can opt for a Taxi Parisien, the official Paris taxi company.

I walked a few blocks away from the station and found a ride, grateful to be back in the bustle of Paris. 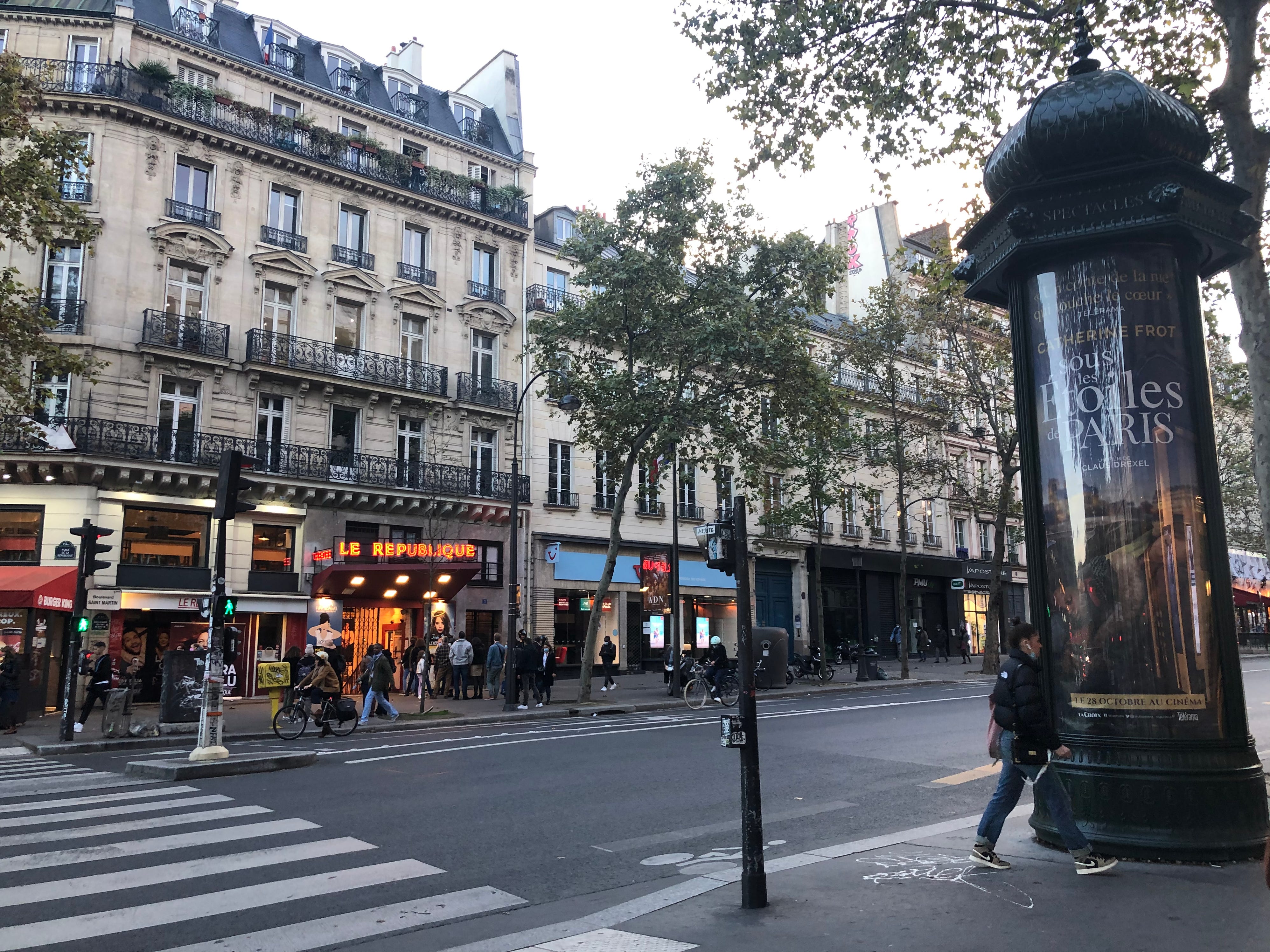 The trip from one city centre to the other made travel between the two countries a lot easier and faster than travelling via plane since airports are usually on the outskirts of cities and require extra travel time.

For this ease of access and quicker travel experience, I’d choose the train over plane travel for this trip any day.