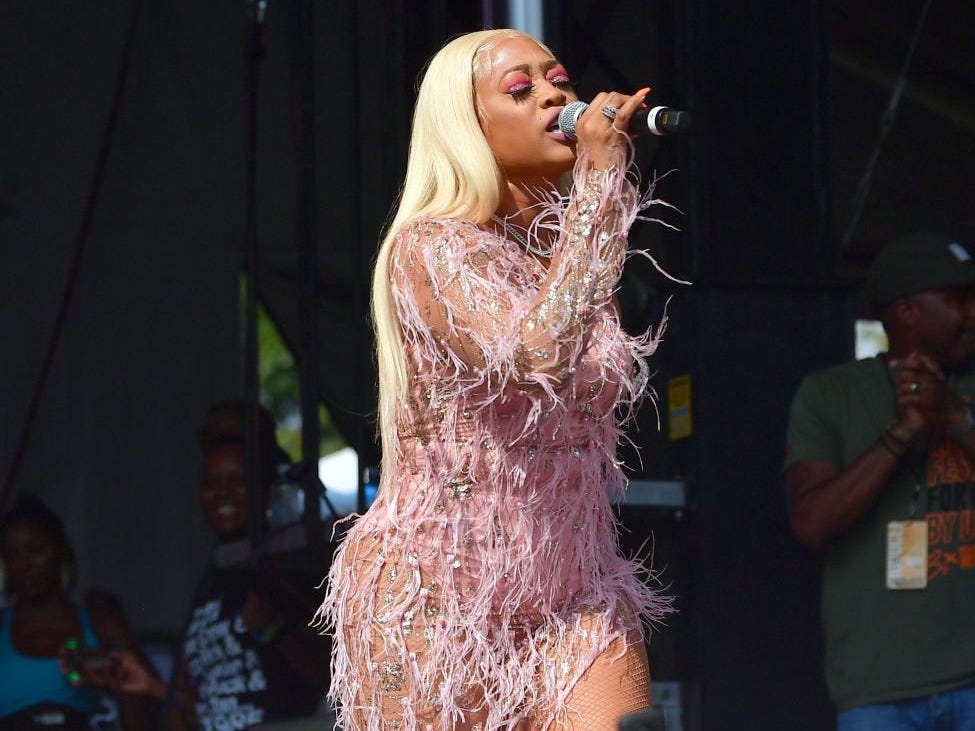 Prince Williams/WireimageRapper Trina, known for her role on ‘Love and Hip Hop Miami,’ spoke about protesters and looting during her radio show on Monday morning.

Trina, the Miami-based rapper who previously appeared in the reality show “Love and Hip Hop Miami,” is facing heat online for her comments criticising protests over police brutality.

Trina, who is Black, spoke on her radio show with rapper Trick Daddy on Monday morning about the nationwide protests that were sparked by the death of George Floyd in police custody after a Minneapolis police officer knelt on his neck. Focusing on the protests in Miami, Trina said that she wants the city to enforce a stricter curfew, which many cities across the US have adopted amid the protests.

“They need to make the curfew at 6 pm to 6 am, that’s how I feel,” she said. The curfew for Miami-Dade county is currently in place from 9 p.m. to 6 a.m. “Keep everybody off the streets, these animals off the streets … acting like they escaped from a zoo. Lock them up at 5 p.m., so the streets can be nice and clean.”

Protests in Miami, like in many cities across the US, have been largely peaceful, interspersed by violence and looting in certain periods.

Trick Daddy, who co-hosts the “Trick N’ Trina Morning Show” with Trina on weekdays, questioned her views by alluding to the deaths of Black men by police, and asked what the appearance of post-protests streets have to do “with people’s lives.” Trina said she’s “not talking about people’s lives.”

Trick said that she shouldn’t “compare” looters and rioters who are out in the streets “for the wrong reasons,” because that’s a “handful” a people that isn’t representative of most of the peaceful protesters. “It’s only a handful of them. The rest of us are tired of it, when the police get behind you, and the red and blue lights come on, you’re not supposed to be scared,” he said. Trina said that she’s “not scared” of the police because she has her licence and registration.

Multiple research groups have found that Black Americans are pulled over at higher rates than white people. “In nearly every jurisdiction we find stopped black and Hispanic drivers are searched more often than white drivers,” the Stanford Open Policing Project reported. Furthermore, unarmed Black people were killed at five times the rate of unarmed white people in the US in 2015, according to the organisation Mapping Police Violence.

Audio of the conversation began circulating on social media on Tuesday and Wednesday, and Twitter users quickly began calling out Trina for her comments.

Author Michael Arceneaux said in a tweet that to “refer to your own as ‘animals’ is so despicable. Thank you for the memories, Trina, but good riddance to you and Black celebrities like you. Y’all are failing us.”

To refer to your own as "animals" is so despicable. Thank you for the memories, Trina, but good riddance to you and Black celebrities like you. Y'all are failing us.

Many Twitter users joked about Trina’s claim that she was not afraid of the police just because she had her licence and registration ready. One user, @NoirVegeta, used a video of sports commentator Stephen A. Smith to make the point that police “don’t care” about that.

Trina: I have a valid drivers license, insurance, and registration!

Many people referenced Trina’s 2019 altercation with a white woman who allegedly called her a racial slur in Walmart.

Not Trina calling protestors “animals” a few months after being called the n-word by a white woman.

Trina published multiple tweets on Wednesday morning writing that she was doing her part to support the Black Lives Matter movement, and was ready to fight with people on Twitter who were angry over her comments, but deleted the tweets soon after. Still, she left up one tweet that appeared to reference the controversy.

A representative for Trina did not immediately return Insider’s request for comment.