Taavet Hinrikus, the CEO of fintech startup TransferWise, had harsh words for bitcoin on Monday morning, claiming that the digital currency’s growth has been driven by “greed,” and that nobody actually wants to use it.

He added: “I think the growth of bitcoin has probably been driven mostly by greed, by people thinking ‘oh the value must — can only — go up.’ I think we’re kind of seeing that cool down now.”

Some bitcoin startups are also starting to turn their backs on bitcoin due to a lack of consumer interest. Bitcoin wallet and exchange Bitreserve rebranded in October 2015 as Uphold, distancing itself from the currency. It now pitches itself as a more general online wallet.

CEO Anthony Watson told Business Insider that it’s the blockchain — not bitcoin itself — that’s a big deal, saying: “I don’t think bitcoin is going to be anywhere near as important as people say it is today. That’s a personal view. The blockchain is very transformative.”

In June, meanwhile, bitcoin company BitPay told Business Insider: “We keep adding merchants — we’re up to over 60,000 now — but they’re selling to the same pool of bitcoin early adopters.” The currency is failing to attract new users.

Harsher words come from Robert Mohland, who built dogetipbot, an tipping tool that lets users tip others with digital currencies online. He open-sourced the tool in November and moved onto a new project, calling bitcoin “a solution looking for a problem” and claiming that traditional finance is “more profitable and desirable” for ordinary users, Coindesk reported.

Bitcoin is a decentralised currency — there’s no central bank regulating transactions. Instead, it uses complex cryptography to let users send bitcoin to each other, with all these transactions recorded on the “blockchain” — a public ledger shared between everyone on the network.

Bitcoin’s advocates argue it could revolutionise the global financial system, doing away with the need for the majority of traditional financial structures. But many within finance think that the efficiencies of the blockchain can be incorporated into existing institutions. Hinrikus said at TechCrunch Disrupt that the blockchain — the technology that underpins bitcoin — is “much more exciting.”

TransferWise is one of the hottest fintech — or financial technology — startups in Europe. It’s focused on transferring money abroad, and promises to be eight times cheaper than banks by using clever peer-to-peer technology.

This cross-border money transfer is one of the areas where bitcoin enthusiasts claim the digital currency has significant advantages over traditional currencies — you can send huge amounts around the world for very low costs.

Kristo Kaarman, TransferWise’s co-founder, told Business Insider earlier this year: “We’re very excited about the blockchain as a concept. I don’t think anyone’s really clocked how to use it for moving money locally, let alone internationally.

“There is a little bitcoin economy starting but all the other things… it’s just too early to know if there is a real use case for it and how people will use it. I’d say we’re monitoring the space.”

The mainstream financial industry is currently looking closely at the blockchain as a way to revolutionise finance. Goldman Sachs says in a recent note that the blockchain “can change … well everything” and 30 banks have joined an industry-wide partnership looking for use cases for the blockchain. 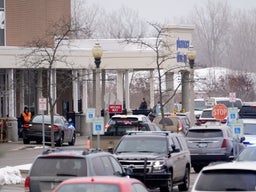