Staff at Trader Joe's have lower COVID-19 infection rates than the community average in 'virtually all' areas, the grocery chain says 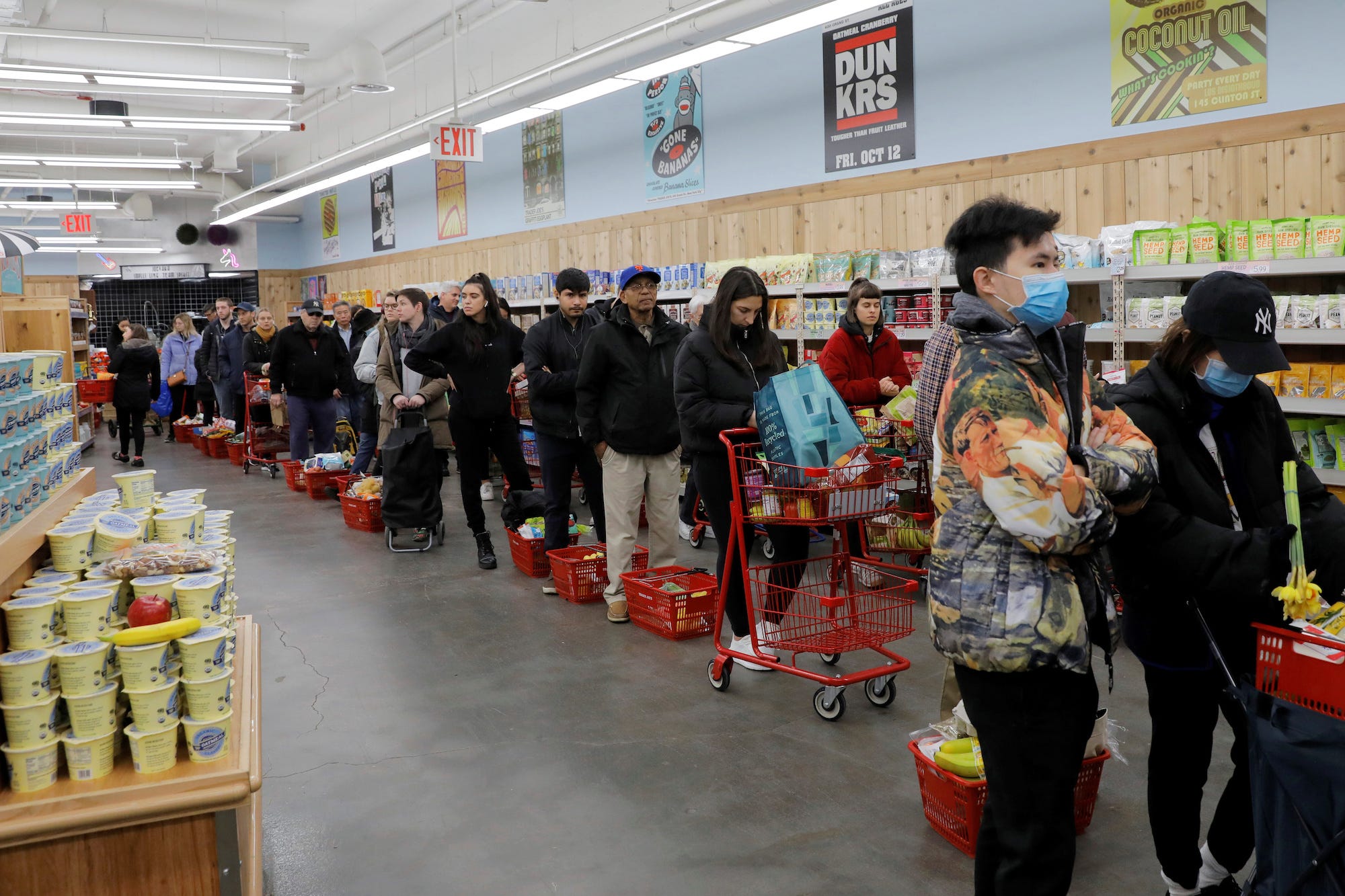 Andrew Kelly/ReutersShoppers in line at a New York City Trader Joe’s in March.

Three-quarters of its 514 grocery stores across the US had at least one staff member test positive â€” and 17% of stores have reported five or more cases among staff, it said.

But for “virtually all” areas that Trader Joe’s operates in, the stores have a case rate lower than the community average, it said.

Across the US, around 3% of the population has been infected COVID-19, and around 239,000 Americans have died.

Across Trader Joe’s 53,000-strong workforce, there have been two staff deaths in which COVID-19 was suspected to be a contributing factor, the company said.

Announcing the number of COVID-19 infections among staff is an unusual move â€” but Trader Joe’s said it’s important for both employees and customers to understand what’s happening in stores.

In October, Amazon announced that 19,816 of its frontline workers had tested positive for COVID-19. The e-commerce giant has repeatedly come under fire during the pandemic for not protecting its staff.

Harvard researchers found a 20% infection rate at one grocery store

Little conclusive research has been done on COVID-19 infections among retail workers, but the 2.4% infection rate at Trader Joe’s is much lower than what scientists reported at a grocery store in Massachusetts.

Researchers from Harvard University analysed the infection rate among grocery store staff after realising that most of the existing data about frontline staff focused on healthcare workers.

Around 20% of staff at the store they analysed in Massachusetts tested positive for COVID-19, but most had no symptoms, the study published in the Occupational & Environmental Medicine Journal on October 30 found.

The study of 104 workers in May, which did not name the store in question, found an “alarming” infection rate with 21 staff members testing positive for the virus â€” yet only 5 of these had symptoms.


Read more:
Workers say major retailers suppress news of workplace COVID-19 cases, and the agency meant to help workers and customers is powerless to protect them

Workers who followed protective measures, such as social distancing, wearing gloves and masks, and avoiding commuting, were just as likely to test positive, the scientists also noted.

“We did not observe statistical difference of SARS-CoV-2 status associated with protective behaviour (social distancing, use of gloves and/or masks and avoid commuting by public transportation or shared rides), nor did we find significant differences in PPE knowledge, COVID-19 perception and mental health status between SARS-CoV-2-positive and SARS-CoV-2-negative employees,” the paper said.

But staff who could practice social distancing consistently at work “had significantly lower risk of anxiety or depression,” the study said, as did those who didn’t have to commute to work during the pandemic.

The scientists noted that their results may have been affected by the small sample size, and pointed to a similar study in Liaocheng, China, where 9.2% of workers at a supermarket tested positive for the virus.

Grocery store workers feel “scared” to work during the pandemic

In April, grocery store employees spoke to Business Insider about their experience working during the pandemic.

“I’m scared to go to work and worried about getting sick over a job that pays less than $US12 per hour,” one said. “But I also feel like I can’t just stay home because the elderly need supplies and a kind word. It’s really a hard decision.”

“You’re working 30 or 40 hours in the exact place you’re being told to avoid,” another added.

More than 16,300 grocery store workers across the US had been infected or exposed to Covid-19 and at least 108 had died by the end of October, the United Food and Commercial Workers International Union told CNN.