The US could slam tariffs on $3.1 billion of European goods, with products like olives, beer, gin, and planes on the list 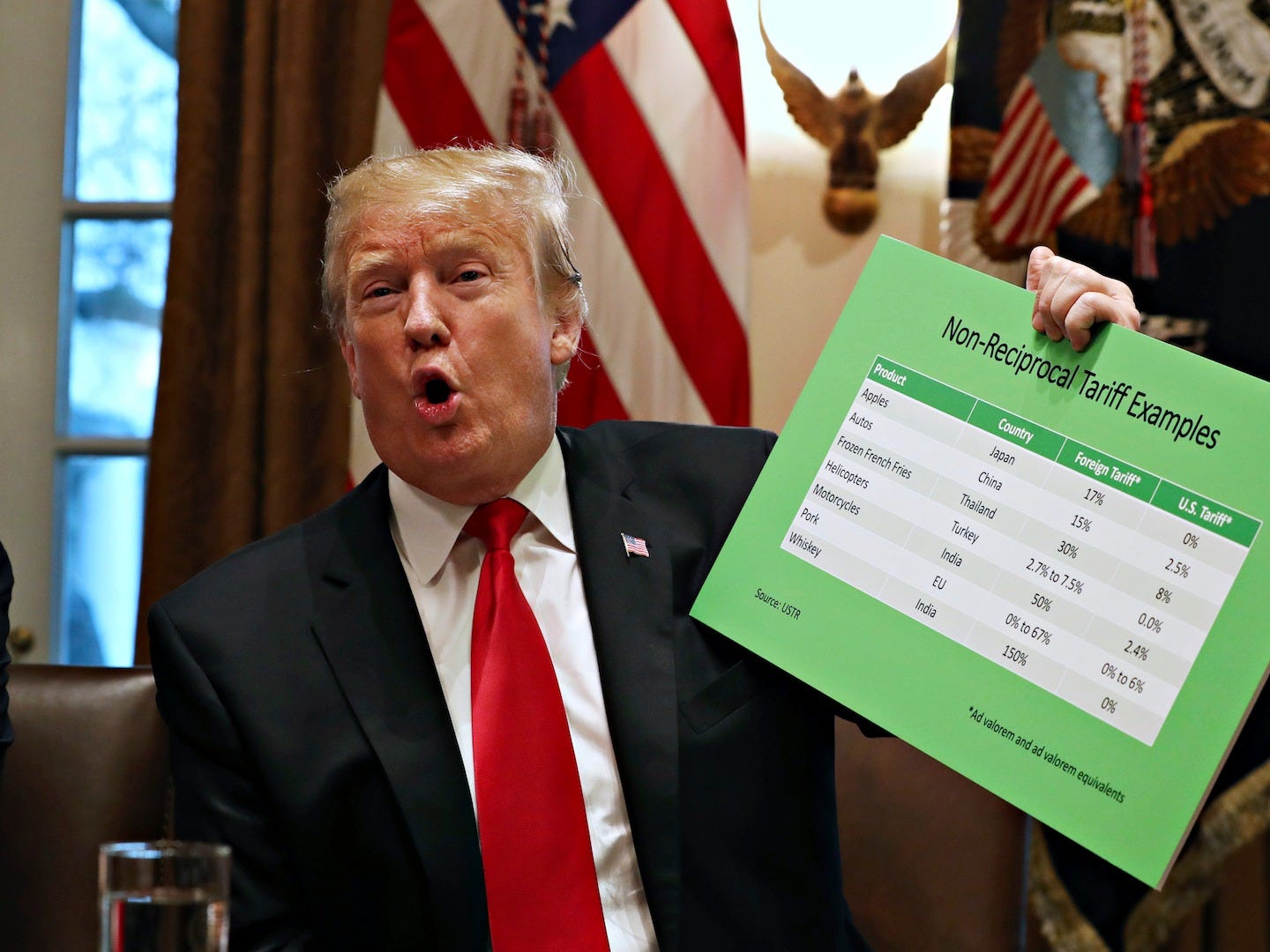 Jacquelyn Martin/AP PhotoPresident Donald Trump holds up examples of tariffs, Thursday, Jan. 24, 2019, in the Cabinet Room of the White House in Washington.

The US is considering slapping tariffs on $US3.1 billion of imports from the UK, Spain, Germany and France paving the way for a fresh trade showdown with Europe, just as fears rise that its trade deal with China is in trouble.

A notice published by the US Trade Representative on Tuesday evening said it was considering imposing tariffs on products such as aircraft, yoghurt, frozen hams, olives, beer, and gin, as well as many others.

The notice was first reported by Bloomberg.

A month long-public comment period will end on July 26, the notice said, at which point it will likely impose the tariffs.

Trade tensions between the US and Europe had previously escalated after the WTO found out that Airbus and Boeing, the world’s two largest plane makers benefitted from billions of dollars of unfair subsidies in different cases dating back to 2004. Airbus is based in Europe, while Boeing is in the US.

In October last year, the World Trade Organisation gave the US the go-ahead to levy roughly $US7.5 billion worth of tariffs on the European Union affecting aircraft parts and luxury goods in a major win for US President Trump.


Dave Portnoy, the poster child of the day-trading boom, told us why he thinks Warren Buffett is ‘past his prime’ and was wrong to ditch airline stocks

The WTO is expected to allow the EU to retaliate and adopt a tit-for-tat response and give the EU similar rights in another case involving US government support for Boeing.

A carousel of retaliation

The Trump administration has used a tactic called “carousel retaliation” which is a regular rotation of goods targeted for tariffs, and Tuesday’s notice is the latest step as part of that tactic.

Bloomberg reported that Trump’s top trade official Robert Lighthizer said he is increasing tariffs to convince the EU to agree to a settlement.

Earlier this year the US increased tariffs from 10% to 15% on imports of Airbus’ aircraft and parts.

EU Trade Commissioner Phil Hogan told European trade ministers in June: “The US has stepped back from the settlement talks in recent weeks. If this remains the case, the EU will have little choice but to exercise its retaliation rights and impose our own sanctions.”


Dennis Lynch and Kristian Heugh run the best large-company stock funds of the last 10 years. The legendary investors break down the 5 principles that guide their quest for long-term growth.

Lighthizer said in March there was “no valid basis” for the EU to retaliate against US goods.

“We will continue to press the EU to negotiate a resolution that respects the WTO’s findings,” Lighthizer said.