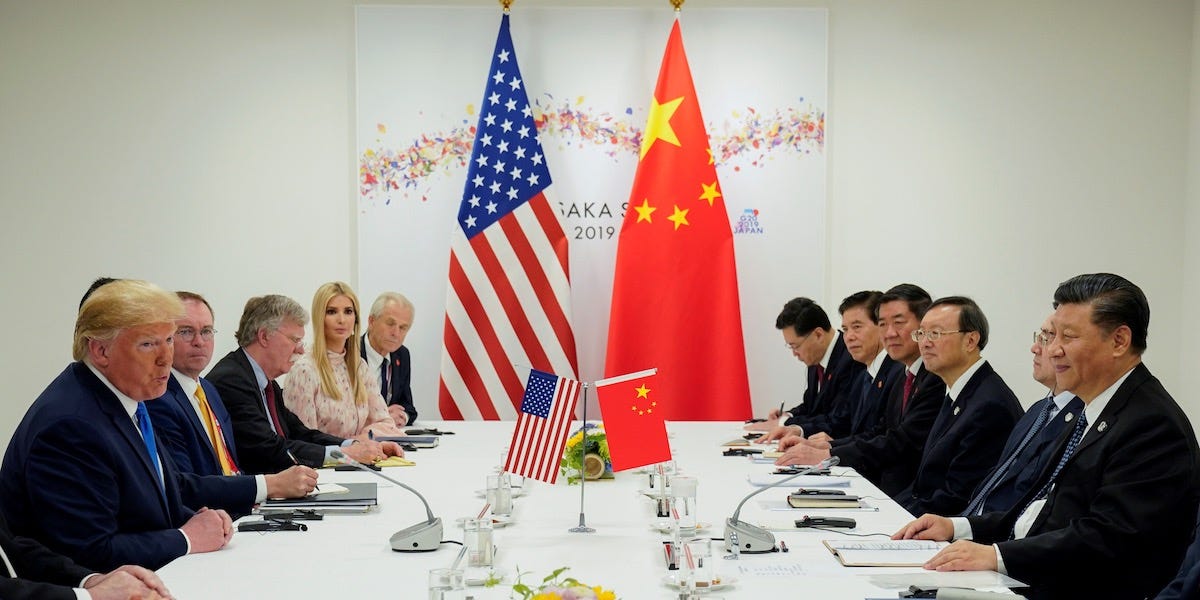 Kevin Lamarque/ReutersUS and Chinese delegations, led by President Donald Trump and President Xi Jinping, at their bilateral meeting at the G20 leaders summit in Osaka, Japan, on June 29, 2019.

The two-year trade war between the US and China has slashed $US1.7 trillion from American companies’ market cap, the Federal Reserve Bank of New York said in a Thursday report.

One-day returns on the days of trade-war announcements totaled -8.9%, according to the central bank’s research. Even adjusting for bounce-backs over a longer trading window, the economists’ sample still sat 2.9% lower after seven key trade-war escalations.

President Donald Trump kicked off the trade war in March 2018, placing tariffs on steel and aluminium imports from China. While a phase-one deal was made just before the coronavirus pandemic, it did little to roll back the hundreds of billions of dollars in duties between the two countries.

Previous research found US companies “bore virtually all the cost” of new import tariffs, diverting cash away from earnings and investment. The following tit-for-tat escalations “are likely to have adversely affected investment by reducing expected returns” and led companies to incur supply-chain-disruption costs, the Fed said.

Firms with exposure to China faced a double-whammy, the economists added, as they sustained profit hits from China’s own duties.

The report found 46% of 3,000 sampled US companies were exposed to China through importing, exporting, or selling through subsidiaries. The average firm took in 2.3% of its sales from China.

The trade war also seems to have contributed to the slowing of China’s economy over the last two years, according to to the report. The country’s weakening growth and non-tariff retaliation against US companies “likely diminished the returns firms made on investments in the Chinese market.”