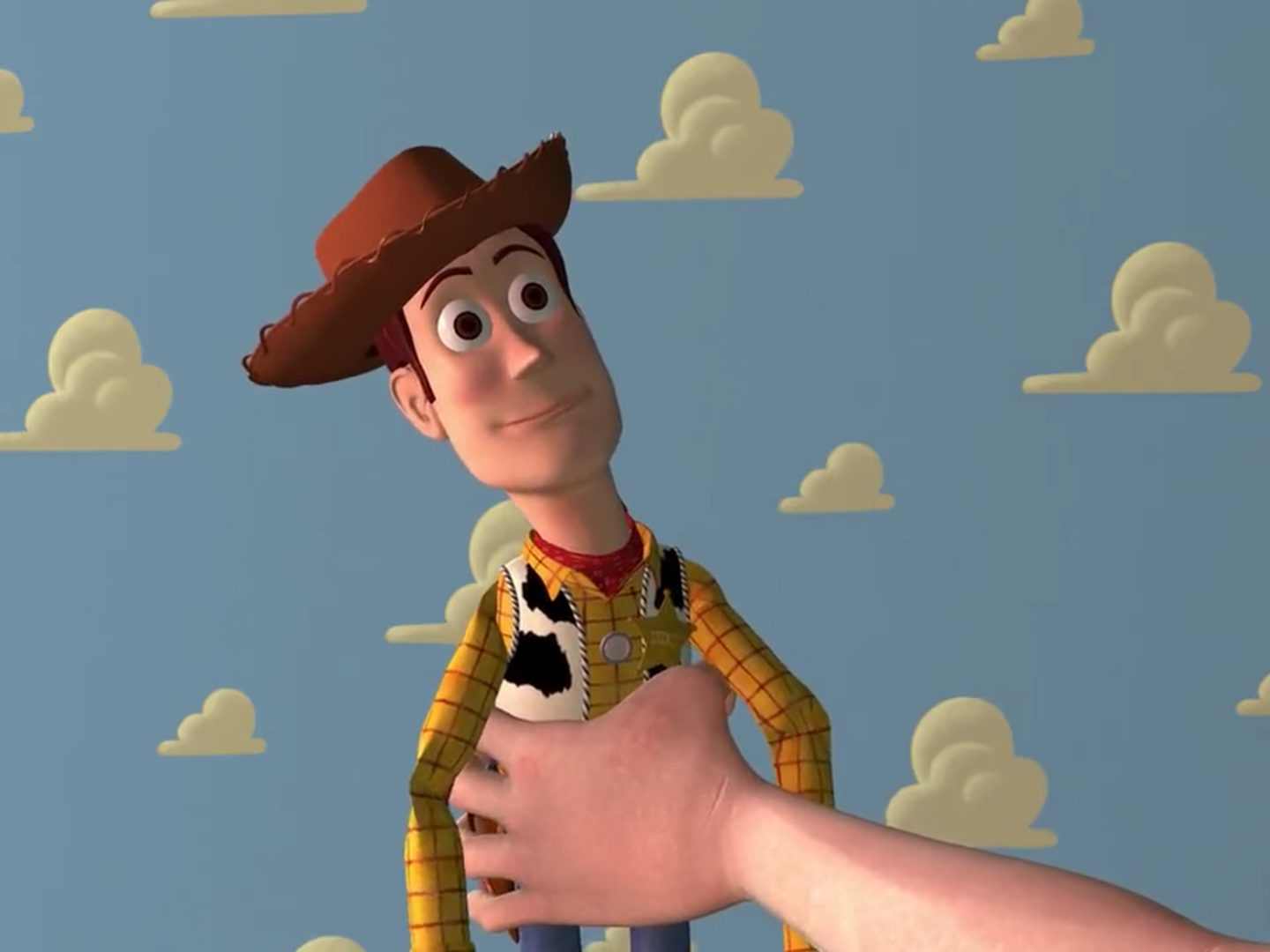 “Toy Story” (1995) is one of Pixar’s most beloved movies, and it’s since inspired three sequel films and several TV series.

The animated flick is packed with background gems, witty dialogue, and fun Easter eggs that both kids and adults can appreciate.

Read on for some of the details and references you might have missed in “Toy Story.”

Andy spelled some words wrong on his DIY toy set. Disney/PixarHe put a lot of heart into the cardboard town.

When Andy plays with his toys at the beginning of the movie, he uses self-decorated pieces of cardboard as buildings.

Although some of his labels, including “saloon” and “wanted,” are spelled correctly, others, like “bzillion,” “skool,” and “generil,” are a little off the mark.

The animated toys look like they’re made from the same material as their real-life counterparts, 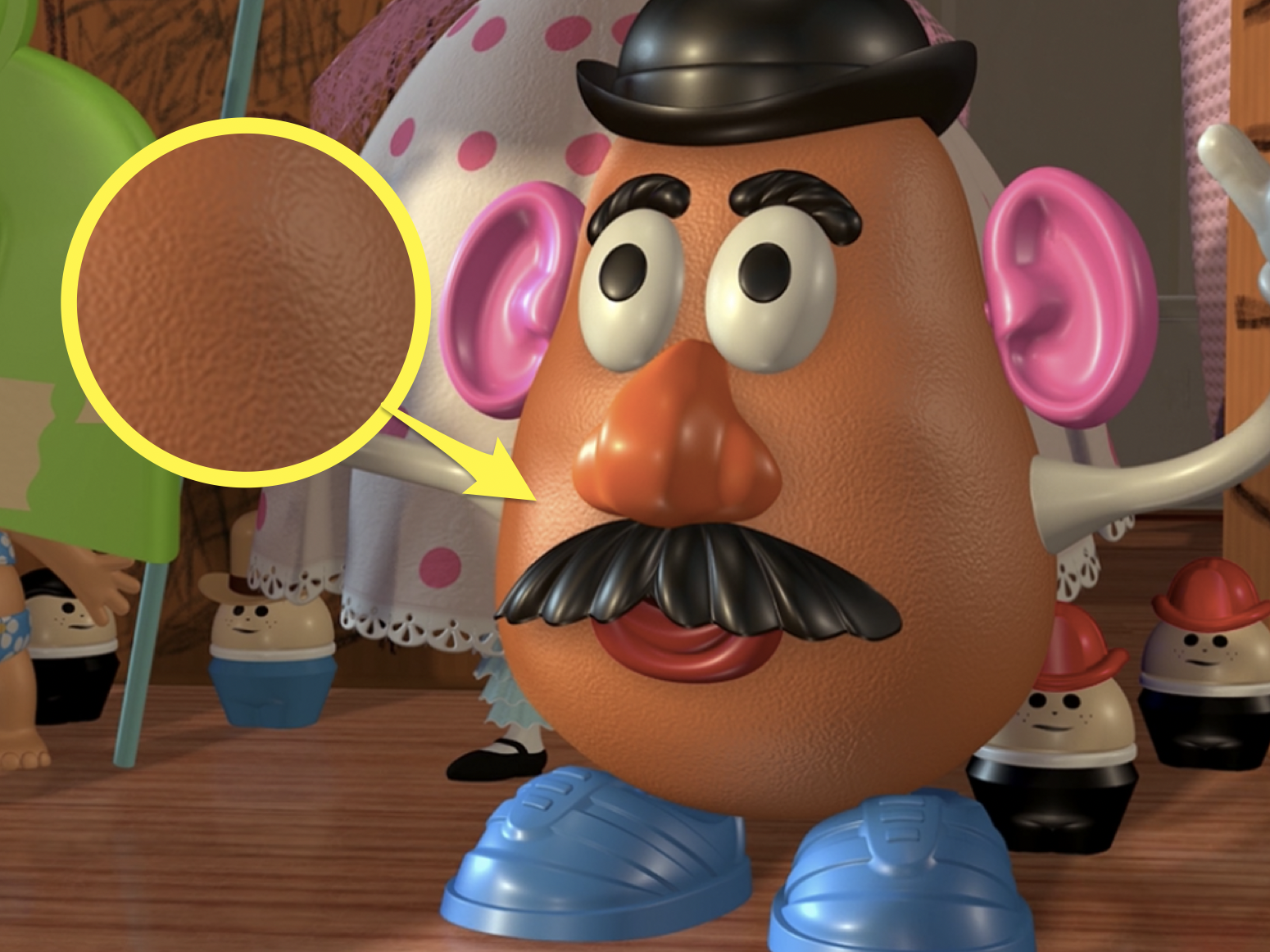 Each toy in the film is designed to look like it’s made of the same material it would be in real life.

For example, Mr. Potato Head’s plastic body is rough and textured, Woody’s clothes are soft and worn in, and Slinky Dog’s spring is shiny and metallic.

There are actual board games, like Operation and Twister, in Andy’s room. Disney/PixarOperation and Mouse Trap are sitting on Andy’s shelves.

Andy’s room has plenty of easily recognisable toys and games.

Real-life board games, including Operation, Mouse Trap, Candy Land, Twister, and Ants in the Pants, can be seen on his shelves and stacked under his bed.

Andy wears a shirt with a cowboy on it at the beginning of the movie. Disney/PixarAndy was really into cowboys at the beginning of ‘Toy Story.’

Before Buzz Lightyear arrives, Andy has plenty of cowboy-themed decorations around his room.

When he plays with Woody before his birthday party, Andy is even wearing a red cowboy hat and a T-shirt with a cowboy on it.

Like Jessie, who appears in “Toy Story 2,” the T-shirt character seems to be a yodeling cowboy.

Some of the books in Andy’s room have hidden meanings. 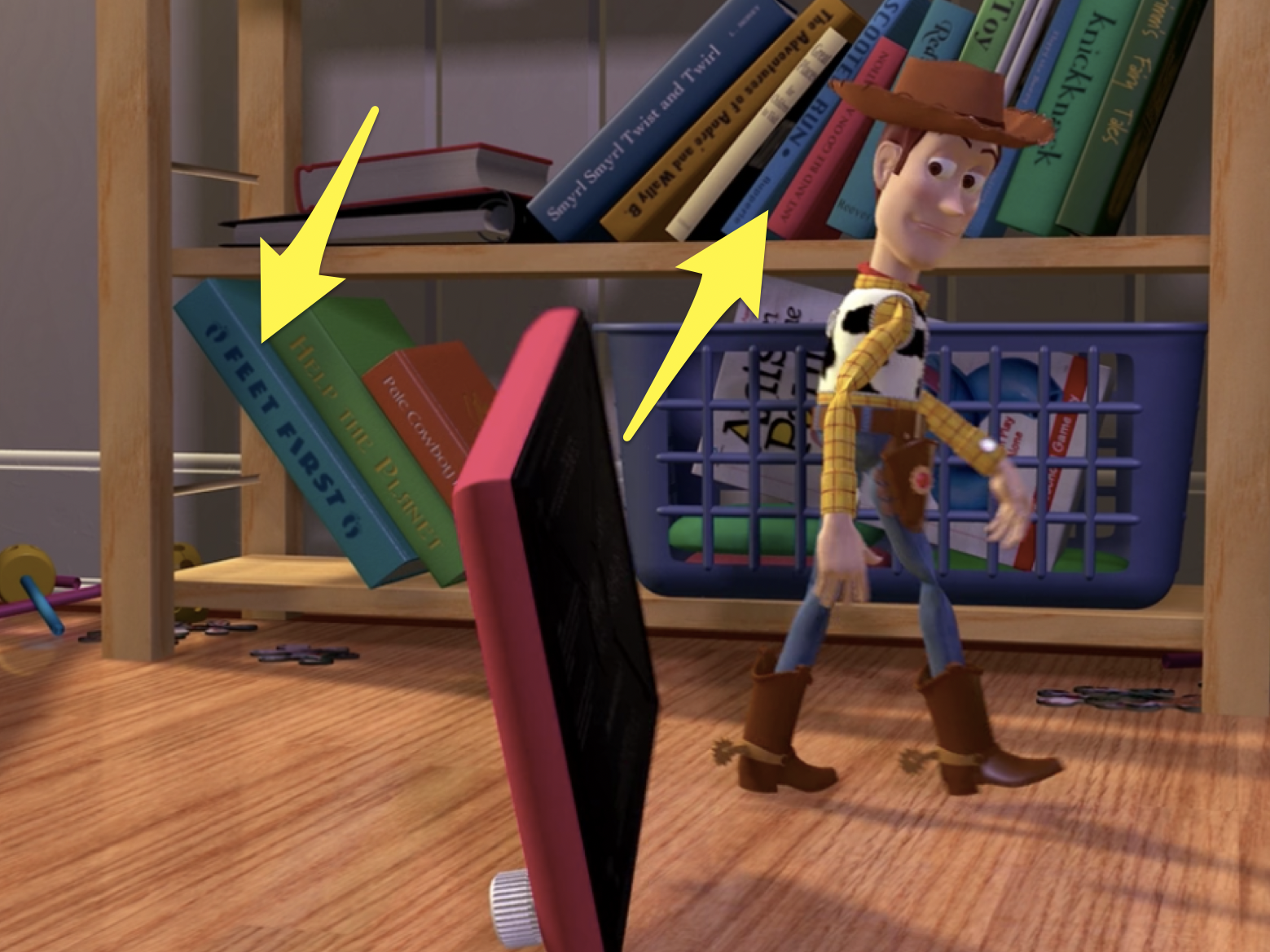 Disney/PixarThere’s a copy of ‘Grimm’s Fairy Tales’ in the background.

In many animated films, background details like book spines aren’t fully fleshed out. But Andy’s bookshelf is full of legible titles.

When Woody walks by the shelf, viewers get a close-up look at made-up books like “Feet First,” “Pale Cowboy from Texas,” and “Help the Planet,” alongside a copy of “Grimm’s Fairy Tales” – a real book that has inspired many Disney stories.

Additionally, some of the books are references to Pixar animated shorts, including “The Adventures of André and Wally B.,” “Red’s Dream,” “Tin Toy” and “Knick Knack.” And another, “Smyrl, Smyrl, Twist and Twirl,” honours Pixar animator Eliot Smyrl.

The toys have accurate reflections and shadows throughout the movie. Disney/PixarPixar puts a lot of attention to detail into its films.

The incredibly detailed animation style in “Toy Story” is noticeable from the very beginning of the movie.

When the toys gather in Andy’s room before the birthday party, their reflections and shadows are accurately shown on the wooden bedroom floor. 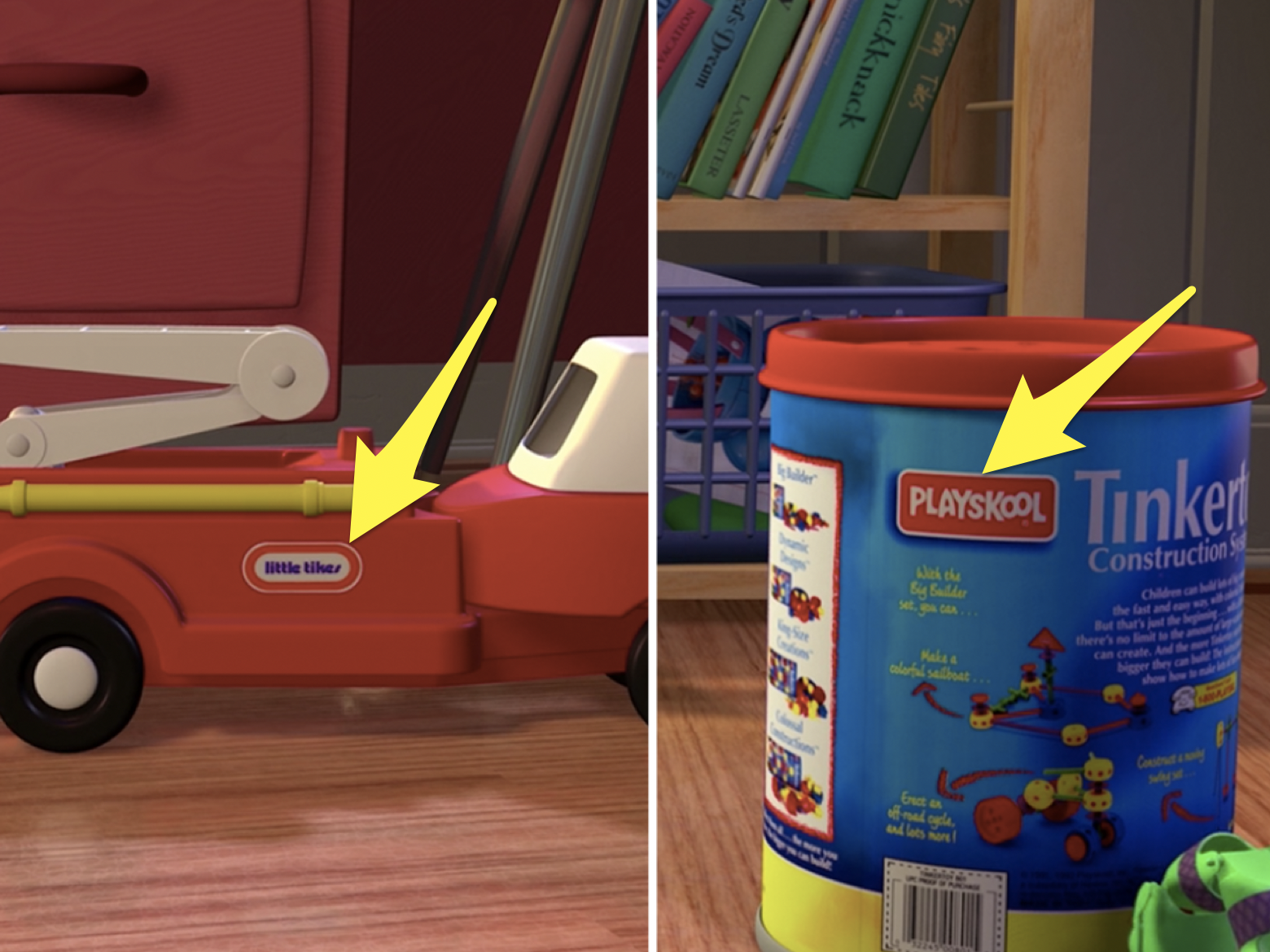 The toys and games shown throughout the movie have plenty of realistic details, including real brand names and logos.

For example, a truck in Andy’s room features the Little Tikes logo on its side and the Tinkertoy container has the authentic Playskool logo and instructions on it. 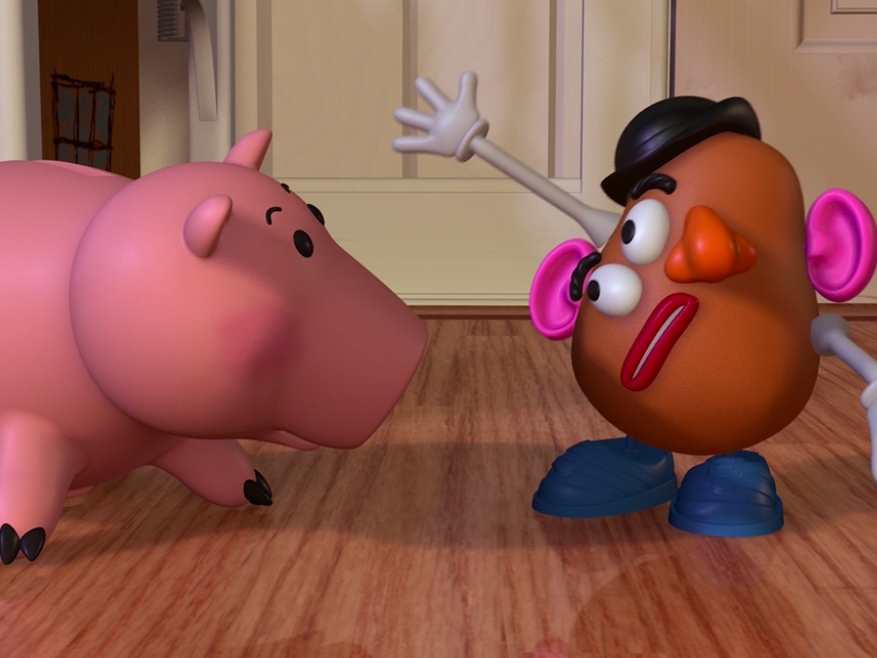 Disney/PixarMr. Potato Head rearranges his face like a Picasso painting.

At one point in the film, Mr. Potato Head rearranges parts of his face before turning to Hamm and saying he’s Picasso.

Pablo Picasso created many paintings in a distorted art style, and when Hamm doesn’t get the reference, Mr. Potato Head fittingly calls him an “uncultured swine.” 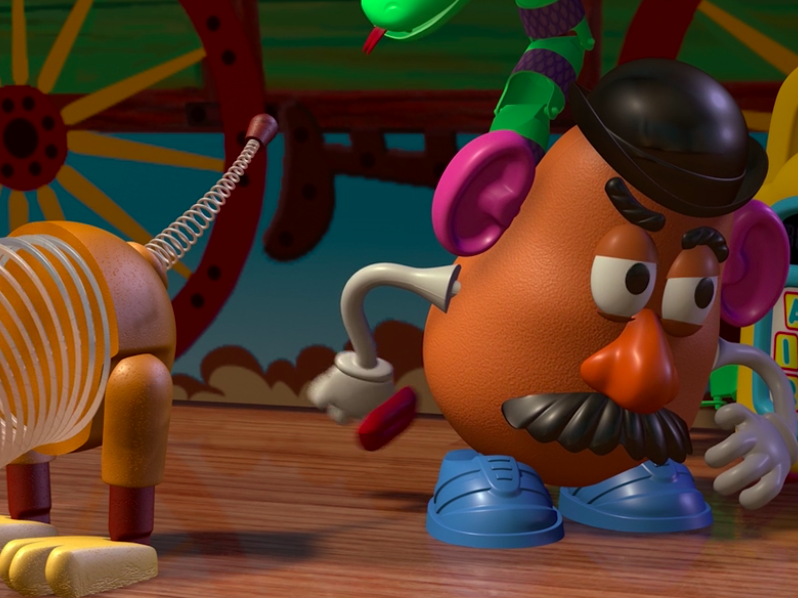 Slinky tends to side with Woody during the toy meetings. So when he agrees with something the cowboy says before the birthday party, Mr. Potato Head takes off his lips and moves them toward his rear to indicate that Slinky is kissing up to Woody.

The plant that the green Army men hide in has a care tag. 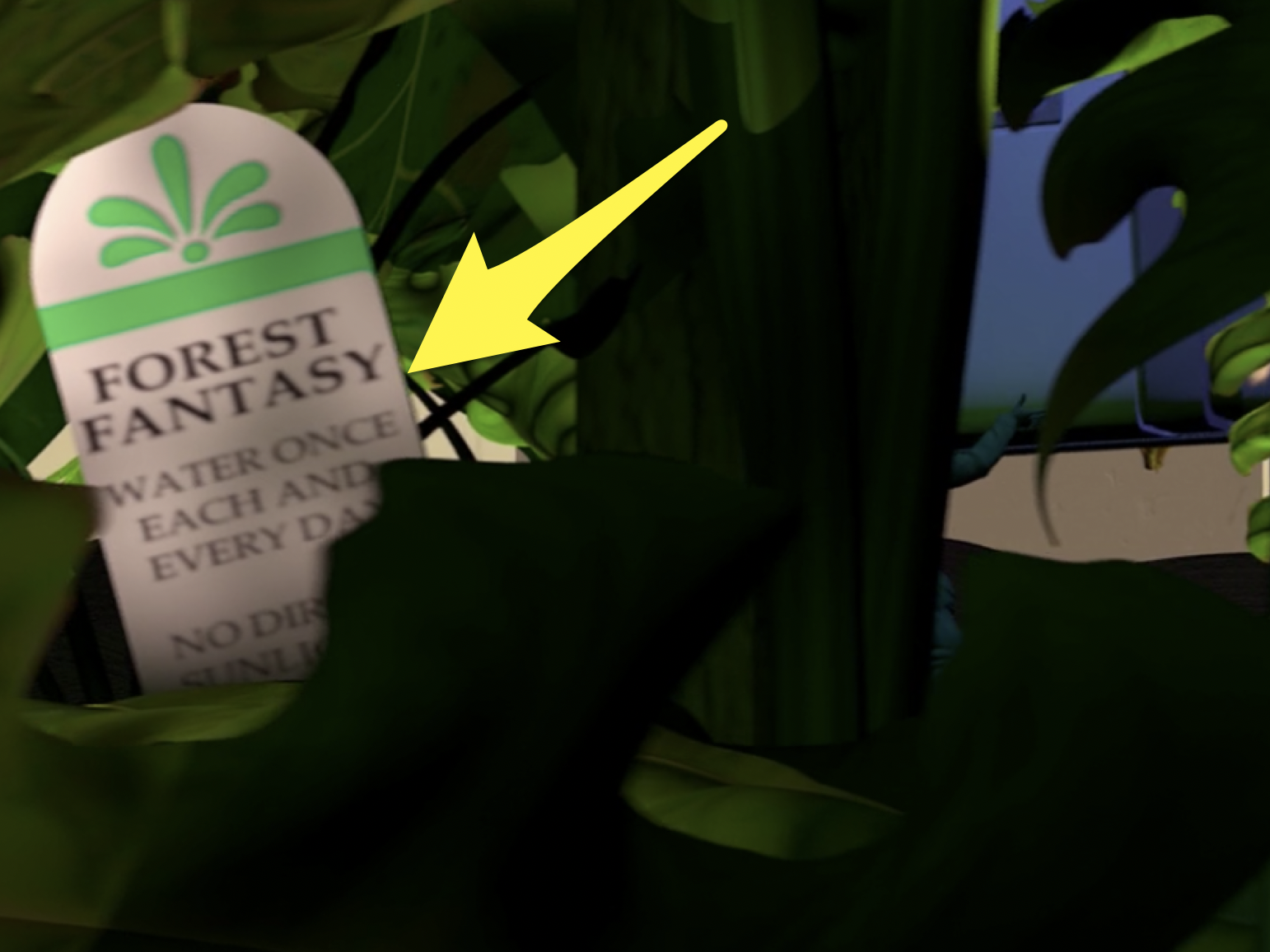 Disney/PixarEverything in Andy’s house was animated with a lot of detail.

When the toy soldiers hide in a large planter during the birthday party, viewers can see that a care tag from the garden store is sticking out of the dirt.

Forest Fantasy doesn’t appear to be a real nursery, but the tag features clear and realistic instructions for caring for the plant.

The gift box Buzz Lightyear arrives in is covered with on-theme wrapping paper. 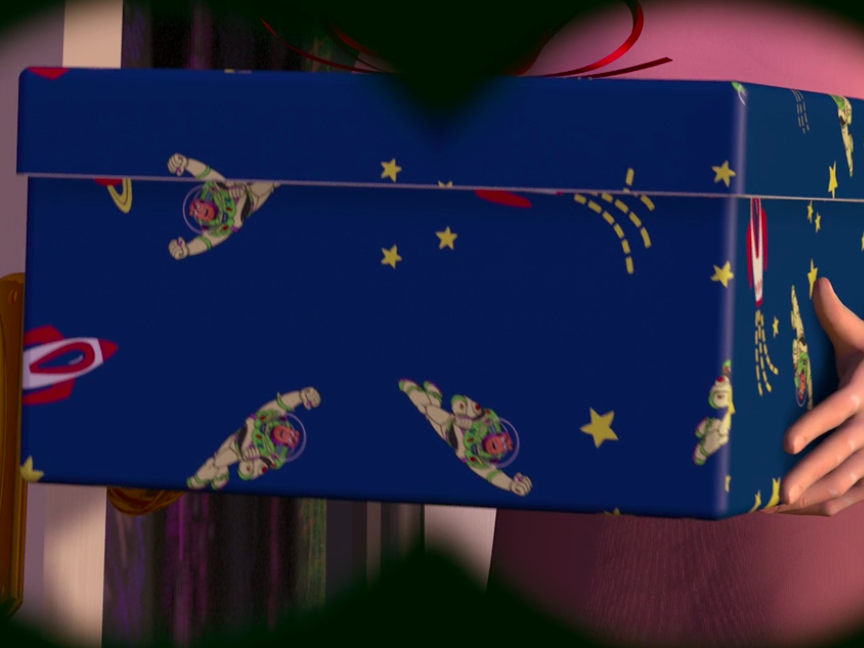 The package containing Buzz Lightyear is the last present Andy opens at his birthday party.

When the soldiers look at the gift through their binoculars, viewers can see that the gift box is appropriately covered in Buzz Lightyear wrapping paper.

Andy has a Mickey Mouse clock on his wall. So, it’s not all that surprising that they snuck in a reference to Mickey Mouse in the form of a classic 1990s wristwatch wall clock.

The licence plate on Andy’s mum’s car is an Easter egg featured in nearly every Pixar movie. 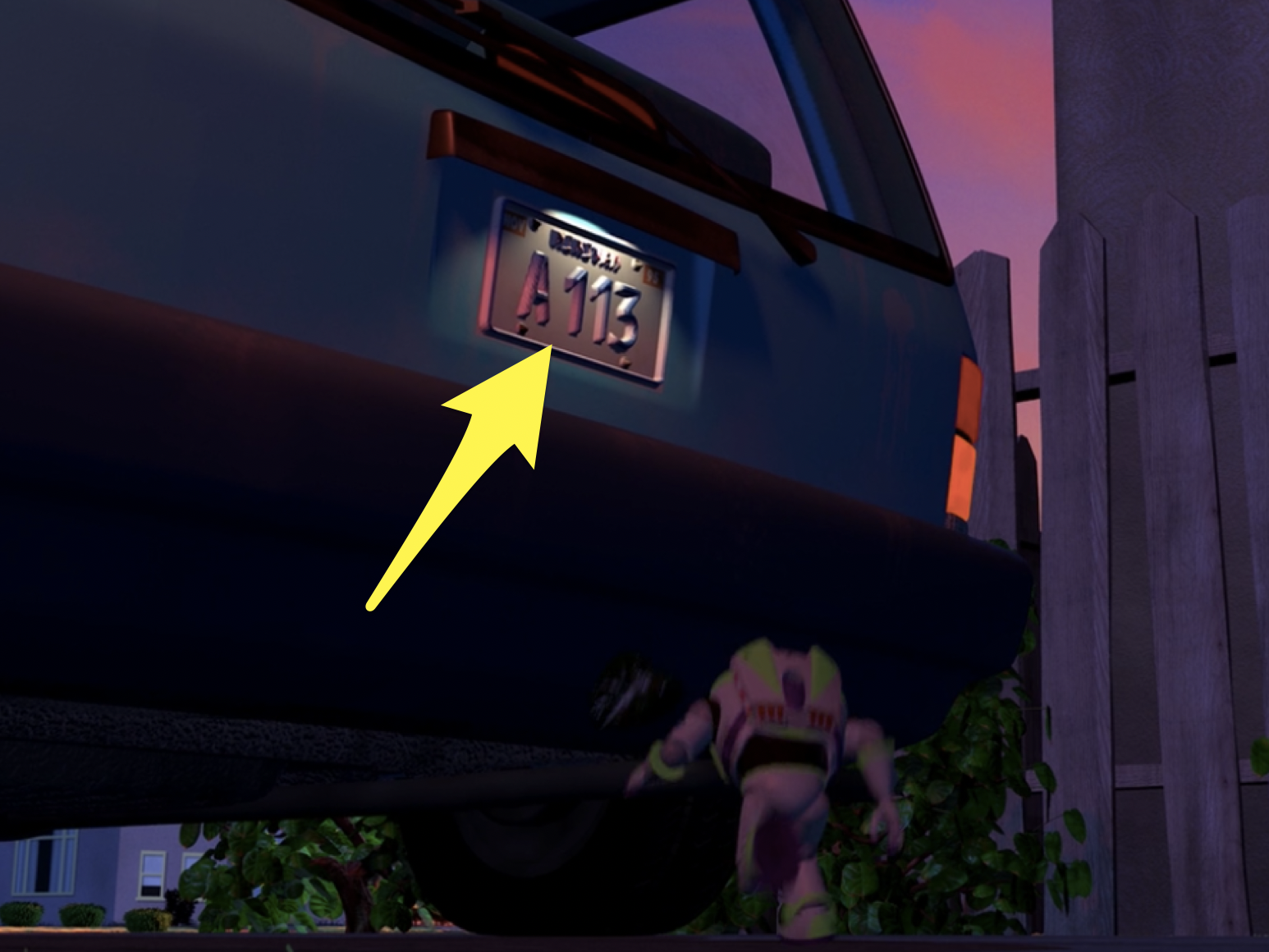 Disney/PixarA113 is a reference to a classroom at the California Institute of the Arts.

The licence plate on the family car reads “A113.”

This code appears in nearly every other Pixar movie, as well as a few Disney ones, and references a classroom at the California Institute of the Arts where many of the studio’s animators studied and honed their craft.

A113 can be seen on a classroom door in “Monsters University,” on a diver’s camera in “Finding Nemo,” and as a secret directive code in “WALL-E,” to name a few.

Dinoco appears in other Pixar movies, too. When Andy’s mum stops to get gas on the way to Pizza Planet, she pulls into a Dinoco station.

The gas station’s name and logo probably look familiar to Disney fans because the brand is heavily featured in “Cars.” The logo also appears in “WALL-E.”

Woody and Buzz fight in front of the real-estate office that sold Andy’s house. 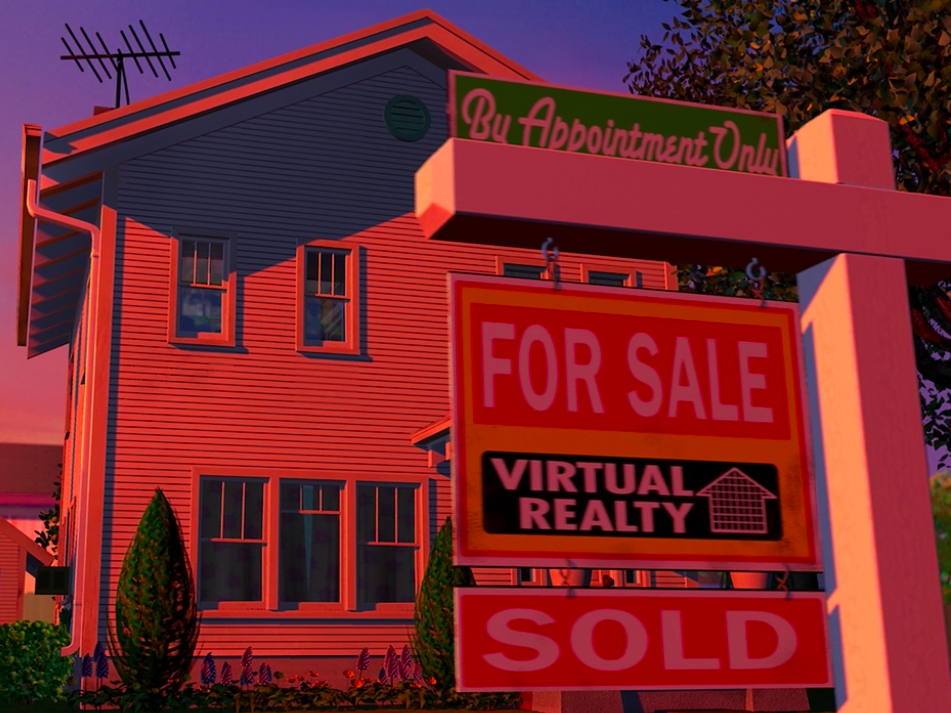 The for-sale sign outside of Andy’s house features the real-estate company Virtual Realty.

When Woody and Buzz fight underneath the car later in the film, there’s a Virtual Realty office behind them.

The Pizza Planet truck has become another Pixar Easter egg. 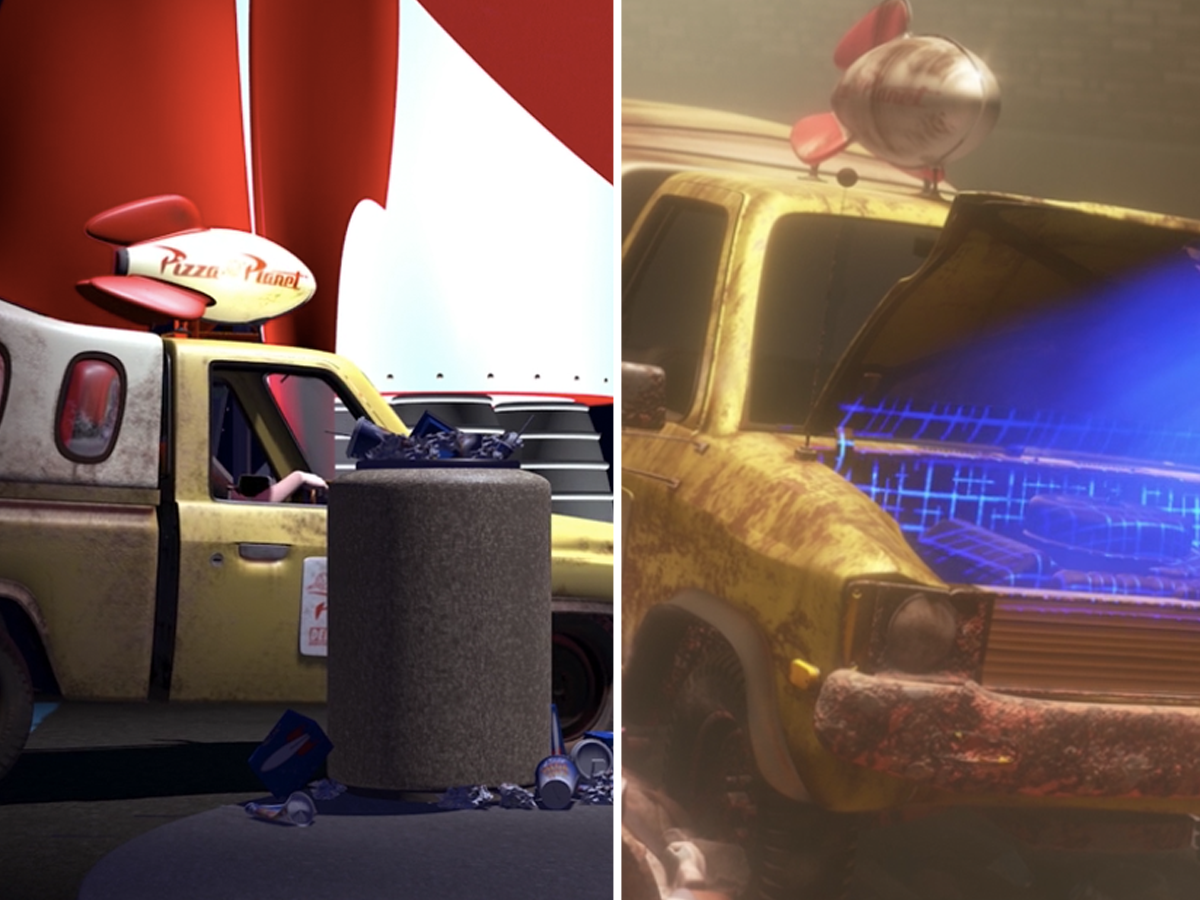 The Pizza Planet delivery truck has a very recognisable look thanks to its yellow hue and the giant rocket on top.

The truck is another iconic Pixar Easter egg that can be found in several other movies. For example, it’s outside of a trailer in “A Bug’s Life,” outside of another mobile home in “Monsters, Inc.,” and in the junkyard in “WALL-E.”

There are some unique decals on the Pizza Planet truck. Disney/PixarIt appears to be a Toyota.

The Pizza Planet delivery truck that Woody and Buzz catch a ride in has some unique details on the back.

The trunk says “yo” in large letters – seemingly to signify that it’s a beat-up Toyota – and the licence plate reads “RES1536,” which is evidently a reference to the resolution the film was rendered in.

Rather than a smiley-face sticker, there’s a neutral face on the back window. And on the other side of the rear windshield, there’s a sticker for a radio station called “KRAT FM,” which is likely an homage to art director Tia Kratter.

In the place where a commercial car would usually have a sticker asking for feedback on their driving, this truck instead has a sticker that reads, “How’s my driving? Ha ha ha ha ha!” 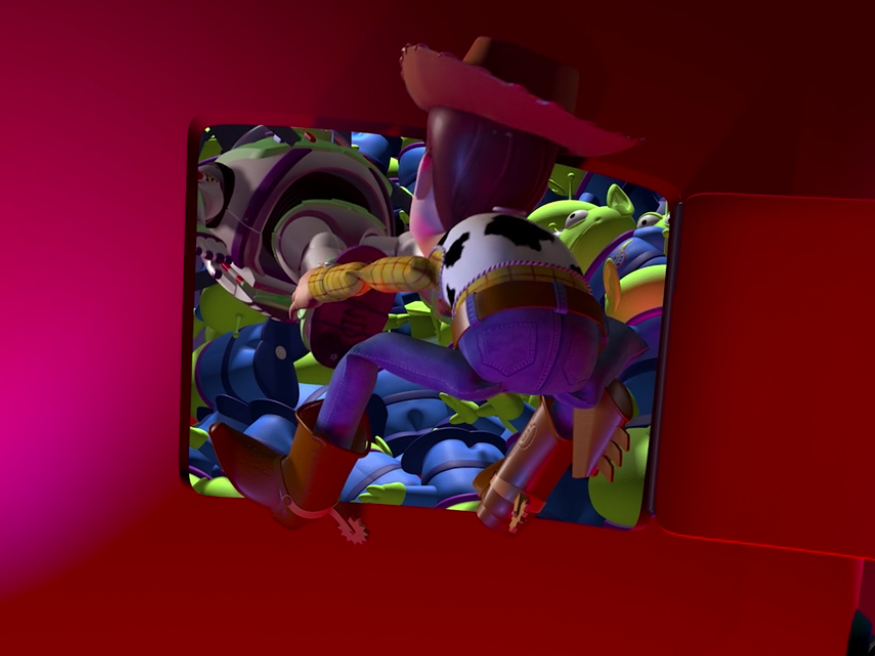 When Buzz and Woody jump into the rocket-shaped crane game at Pizza Planet, they meet dozens of little green alien toys.

The aliens describe the claw as their “master,” and they stop Woody from saving Buzz from it.

Woody calls them zealots – meaning fanatical and uncompromising – which is an accurate description of the claw-worshipping aliens, even if it’s a bit mature for a kid’s movie.

Sid’s room is darker and messier than Andy’s. 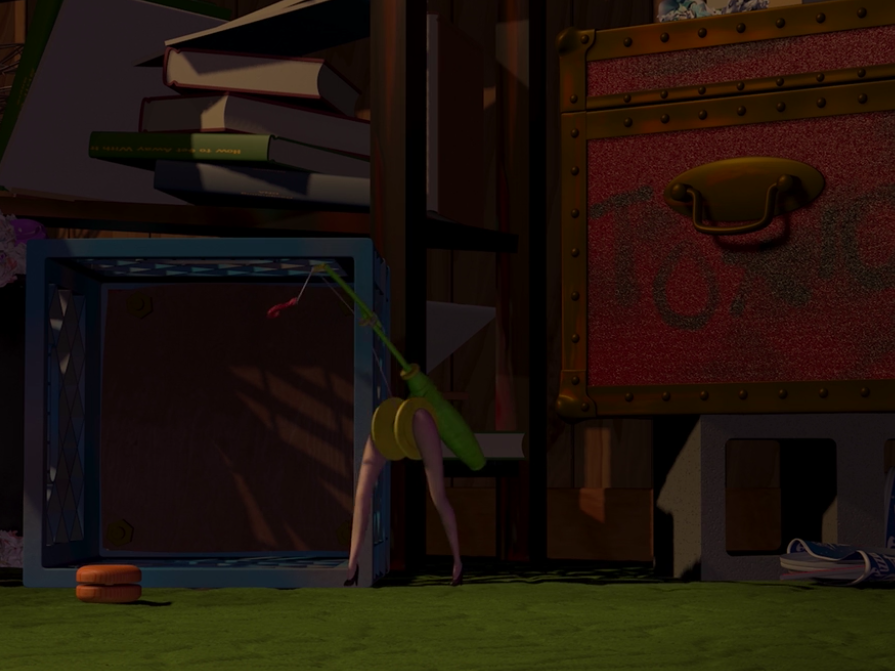 Disney/PixarThere are lots of creepy hybrid toys in Sid’s room.

His toy chest is also different from Andy’s as it has “toxic” and “keep out” written on it, and it’s full of creepy, DIY franken-toys.

Sid’s house has a rug that looks a lot like one from a popular horror movie. 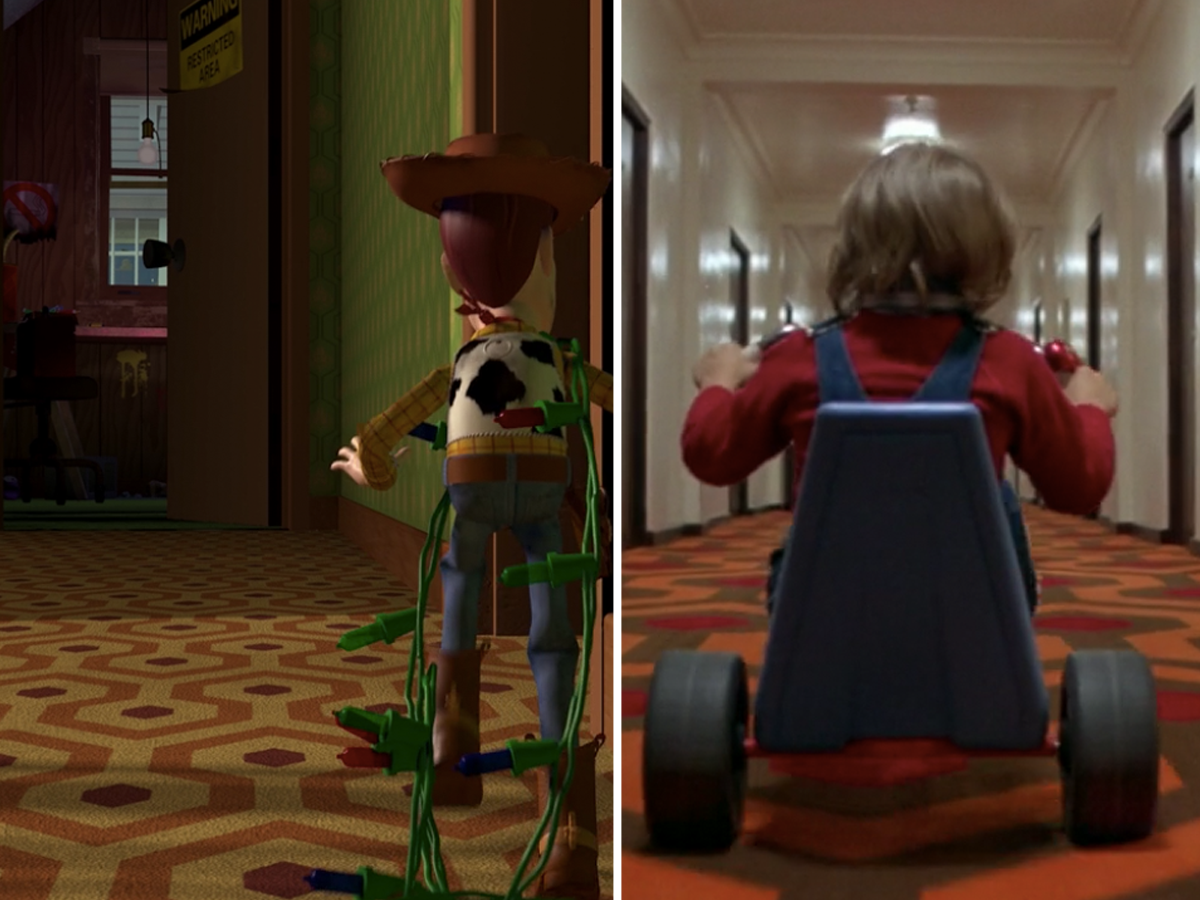 Disney/PixarThe rug in Sid’s house looks like the one from ‘The Shining.’

When Woody leaves Sid’s room, he runs across a hallway carpet with a unique pattern that horror fans may find familiar.

It features a yellow, orange, and red geometric design that looks a lot like the carpet at the Overlook Hotel in “The Shining.”

The idea for the sinister rug came from production designer Ralph Eggleston, according to Empire. And fellow superfan Lee Unkrich, who directed a few “Toy Story” sequels, continued the trend of referencing “The Shining” in later Pixar movies.

There’s an ad for Al’s Toy Barn, which is a major part of the second movie. 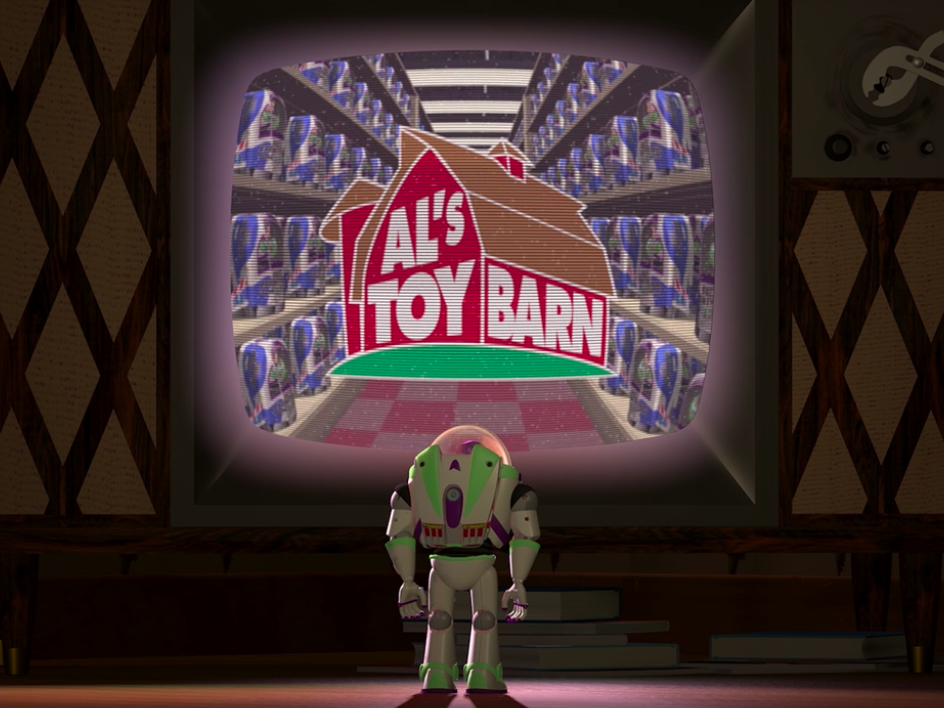 Disney/PixarAl is one of the villains in ‘Toy Story 2.’

Buzz doesn’t start to accept that he’s a toy until he sees a Buzz Lightyear commercial at Sid’s.

The commercial says that Buzz, the “world’s greatest toy,” is available at Al’s Toy Barn.

This is the first time the toy store is mentioned in the series, but it’s featured prominently in the second instalment. 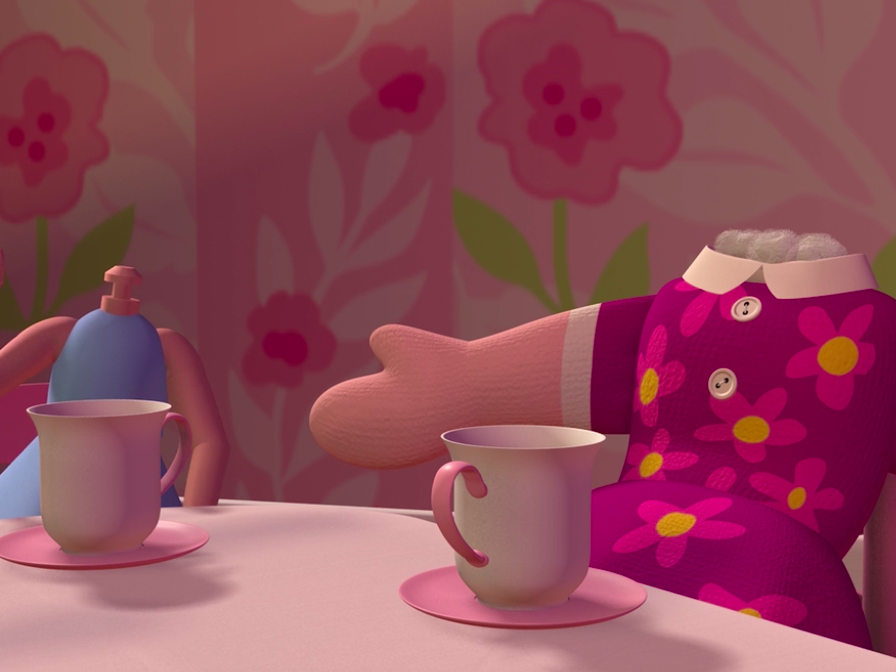 When Sid’s sister pulls Buzz into her room for a tea party with her mangled toys, the space ranger calls two of the headless dolls “Marie Antoinette and her sister,” in reference to the famously beheaded queen.

Sid has an interrogation handbook in his room. Sid’s treatment of toys is pretty dark. His techniques include blowing them up, performing surgery on them, and even torturing them, as he does to Woody.

When Woody is trapped under a crate in the scary kid’s room, there’s a book behind him titled “Improvised Interrogation Handbook” from the “Department of the Army Technical Manual.”

Although the book doesn’t excuse his messed-up behaviour, it does explain how Sid honed his craft.

A song from another Disney movie plays when Andy’s family is in the car. 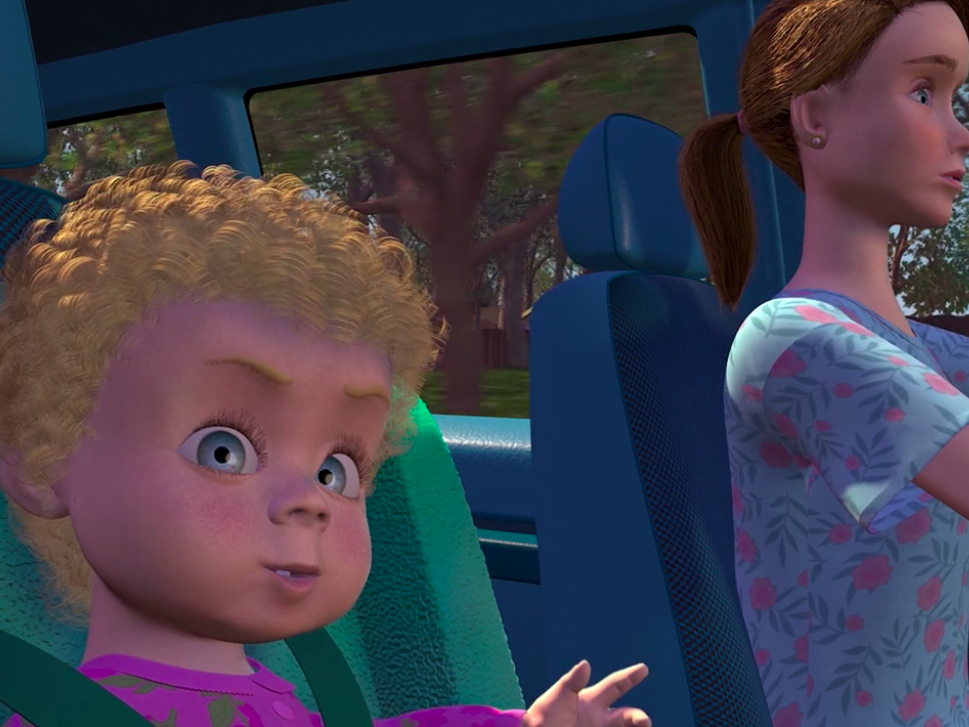 When Andy’s sister, Molly, and his mum are driving past the moving truck, a song from another Disney movie is playing on the stereo.