A plane model once used to train flight attendants was turned into a sleek tiny house. Take a look inside. 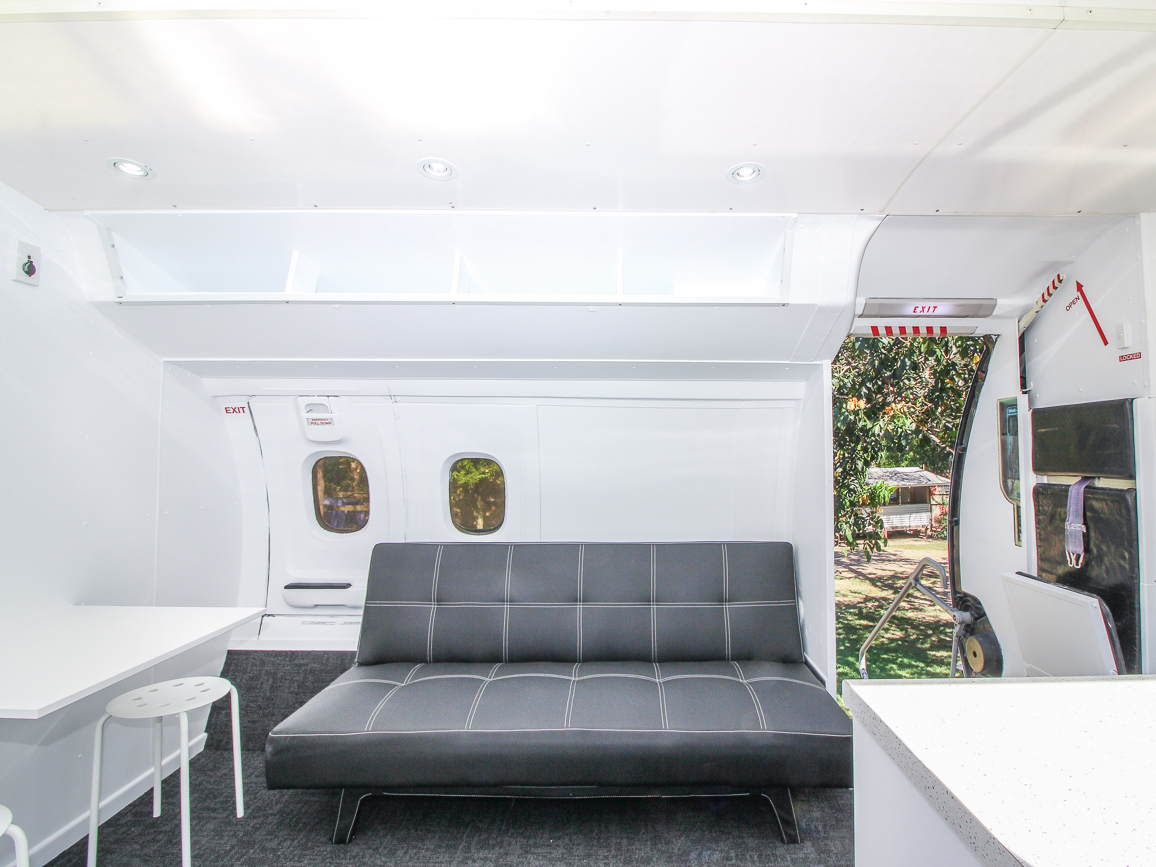 Courtesy of The Tiny House GuysThis tiny house used to be a plane model.

The Tiny House Guys, a building company in Australia, has created a tiny house using a decommissioned aeroplane model, which they are now selling for $US55,000 AUD ($US36,312). They say the house, which they have named “Aero Tiny,” is “Australia’s most unique tiny home.”

Keep reading to see how the company turned the model into a home.

Before it was turned into a tiny house, this section of a plane’s fuselage was used as a training apparatus for flight attendants in Brisbane, Australia. 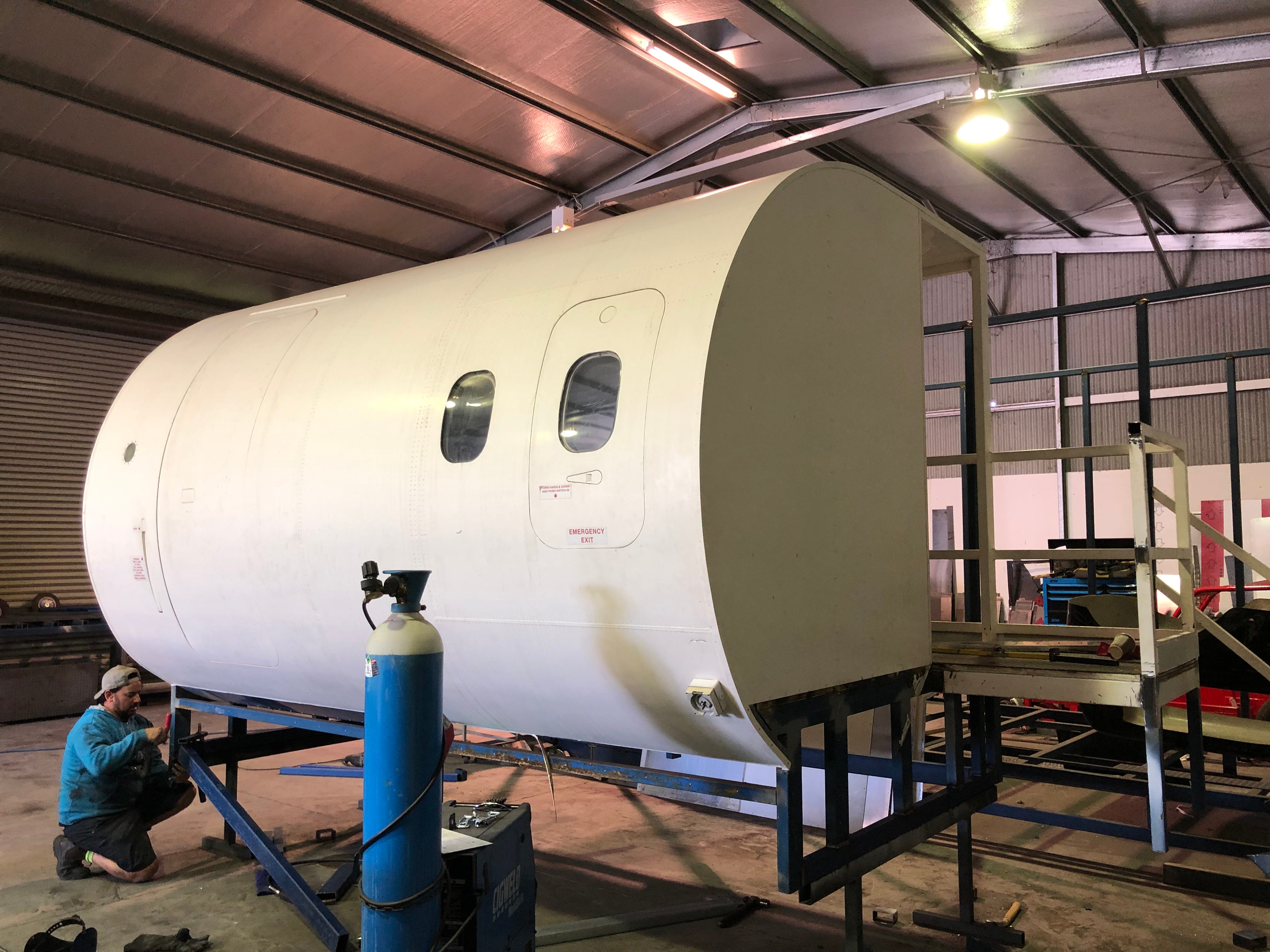 It replicated a Dash 8 aircraft, a model the airline no longer uses, so it was put up for sale. 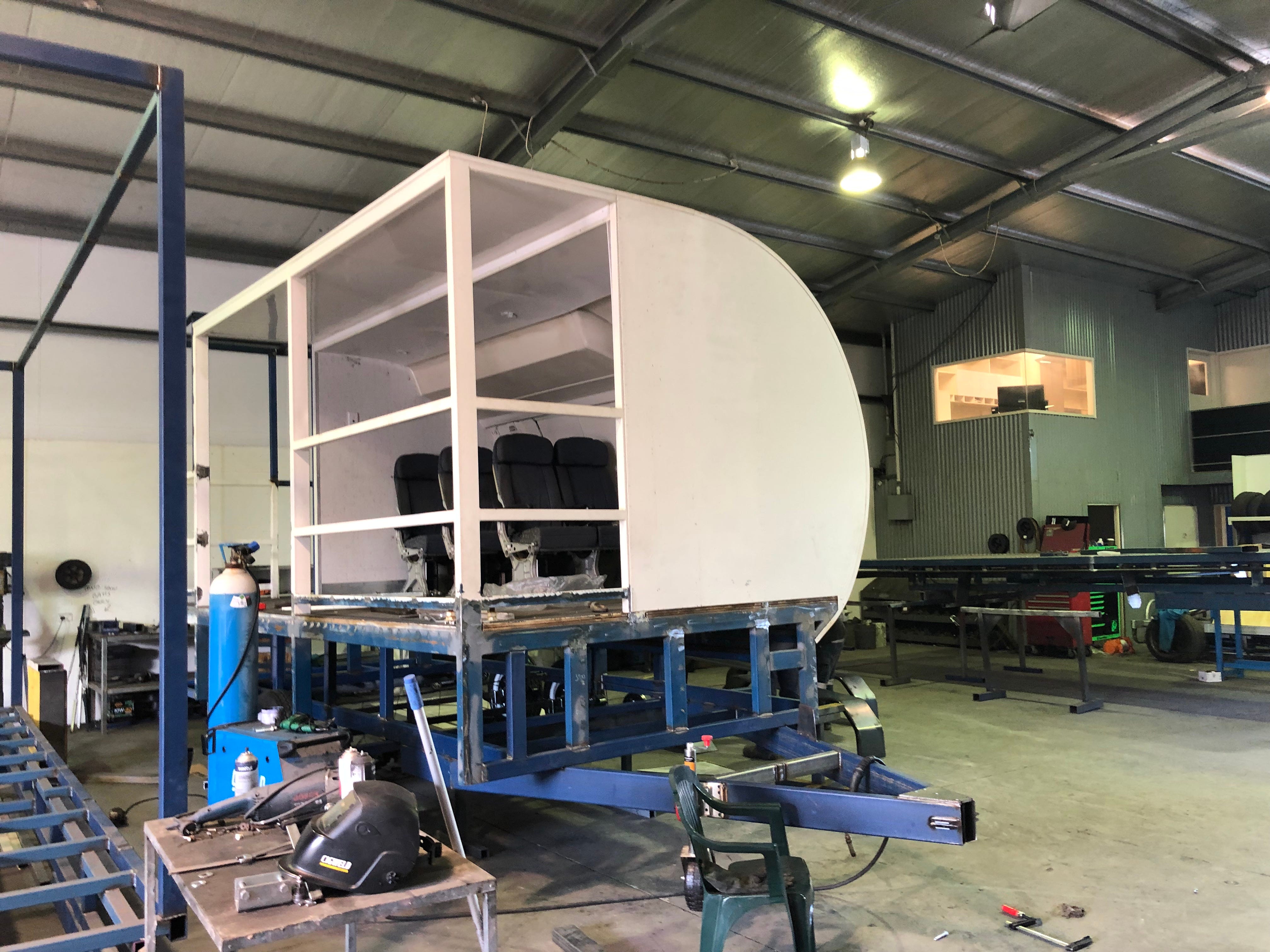 “As soon as I saw it for sale, I knew something special could be made from it,” Keel told Insider. “We bought it straight away and shipped it to our trailer manufacturer to be mounted onto a custom-built trailer designed around it.”

The result is a fully functional and livable tiny house. 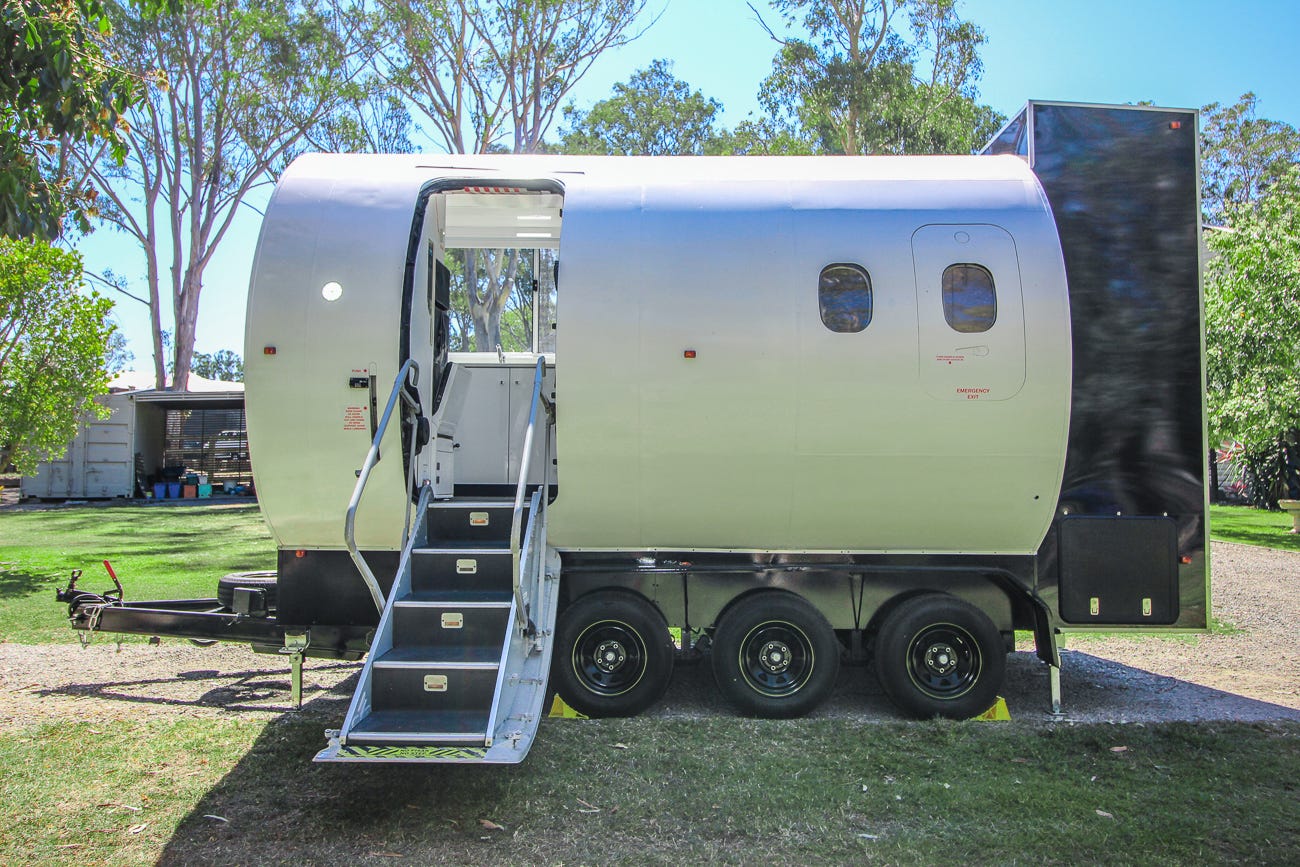 Keel said it took him and his team of electricians, plumbers, carpenters, roofers, and painters six weeks to completely remodel the 5 1/2-by-9-foot plane part.

“The more unusual, the better for us, as we relish in a challenge, craftsmanship, and quality of product. It’s the foundation for our homes as we are not interested in producing high volume generic models,” he said.

The plane’s original door, which has a staircase, was kept in the remodel. 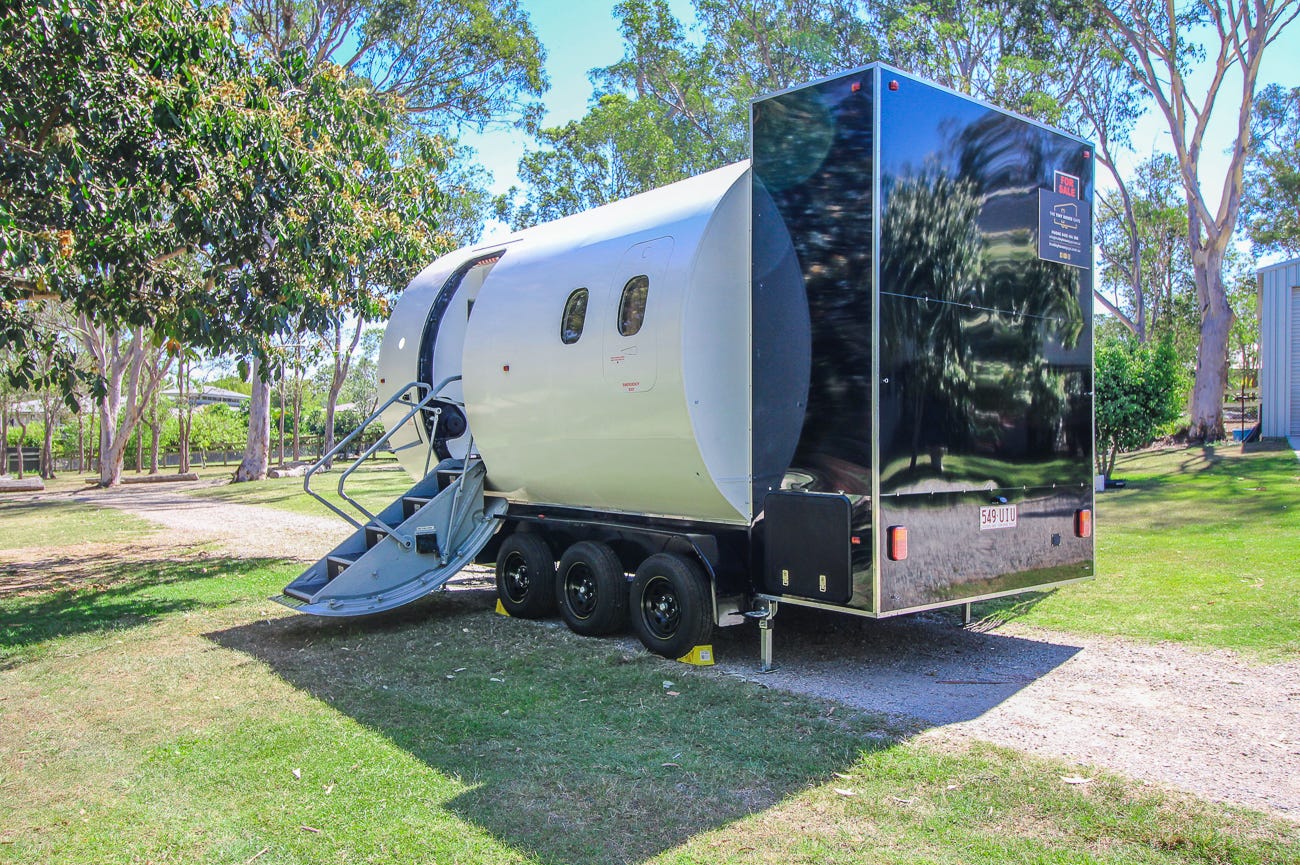 “Originally it was on a stand set high enough for the door to open to the correct height, so during construction of the trailer we ensured the same door height was achieved to allow correct door function,” Keel said.

The other side of the tiny house has a small, rolling deck. 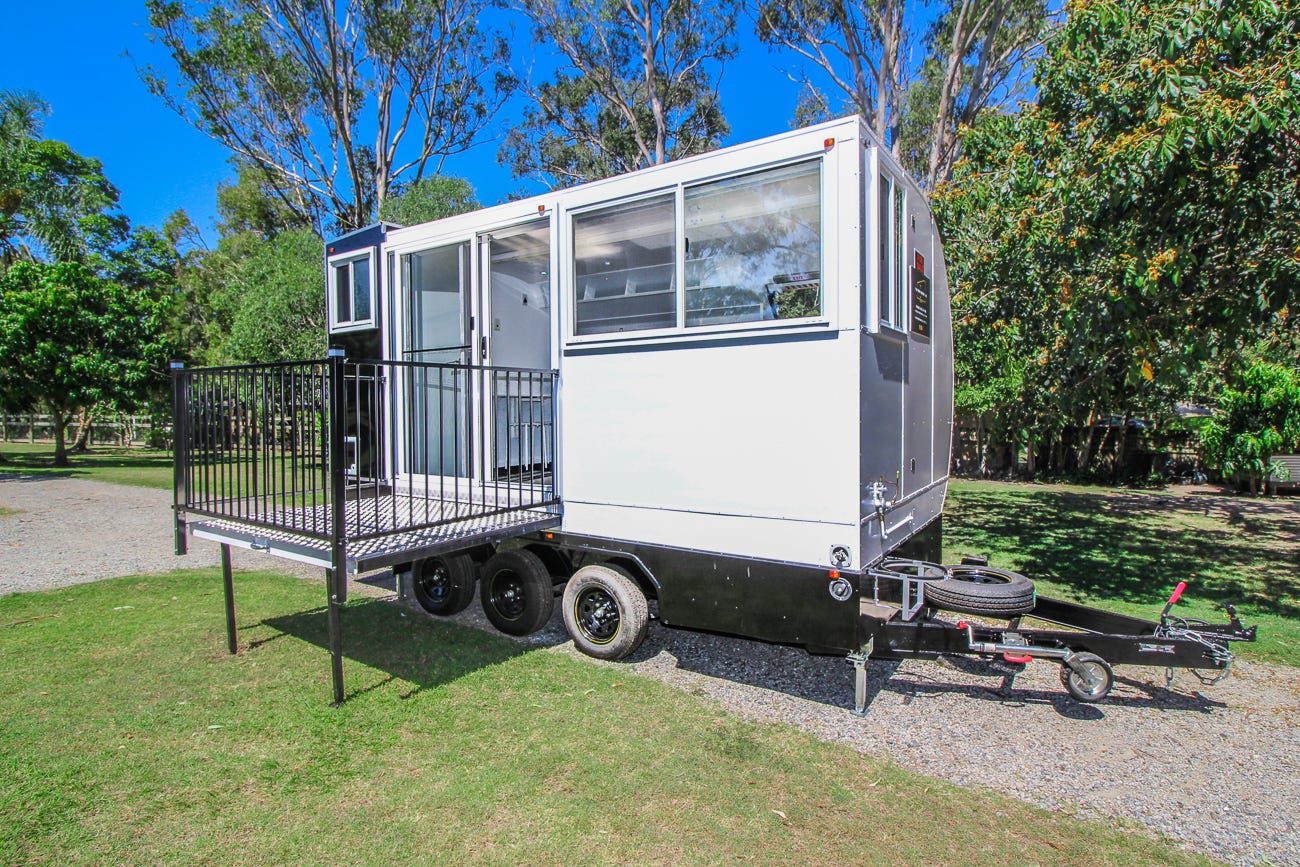 Courtesy of The Tiny House GuysThe back of the tiny house.

The deck can be easily taken down before the home is moved.

Inside, the house has a kitchen, living space, and a bathroom. 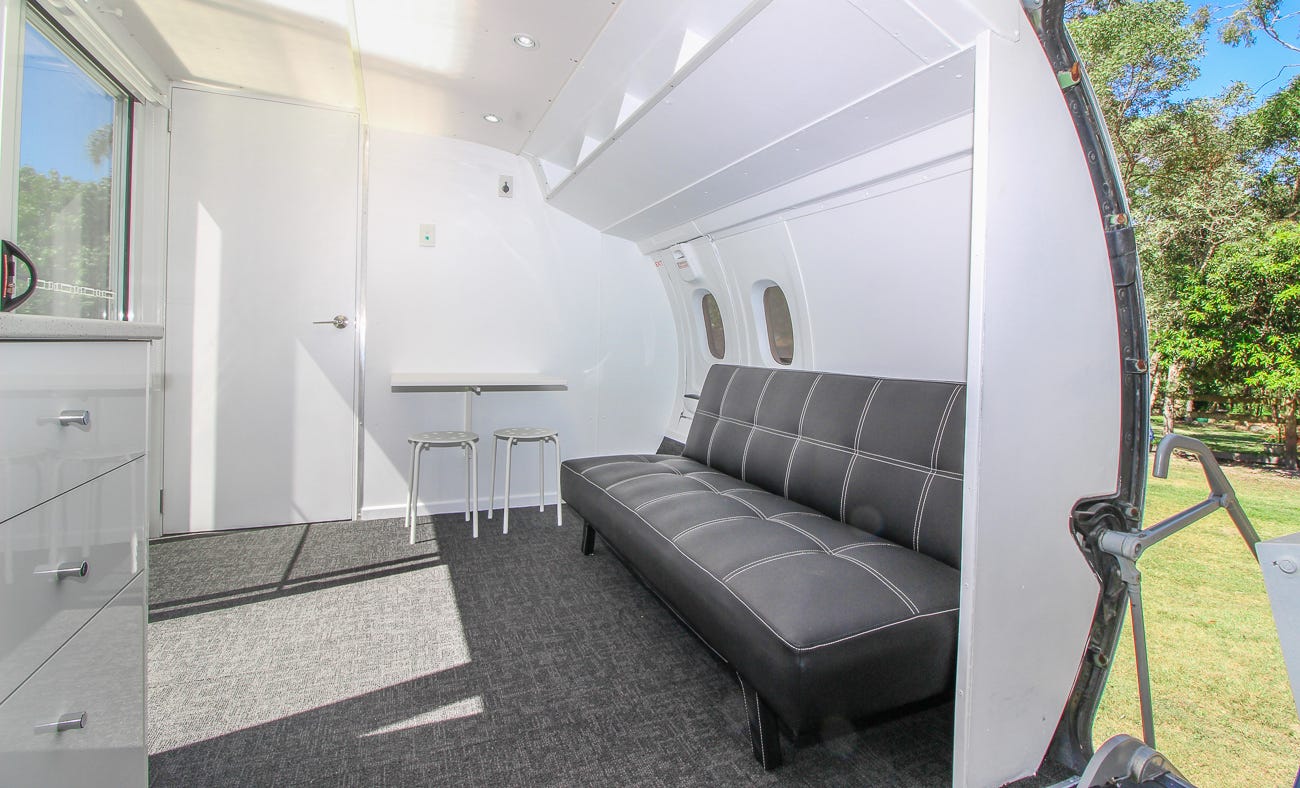 Courtesy of The Tiny House GuysInside the tiny house.

The table next to the couch folds against the wall for more room in the living space.

The aeroplane seats were replaced and the fold-down couch is now in their place. 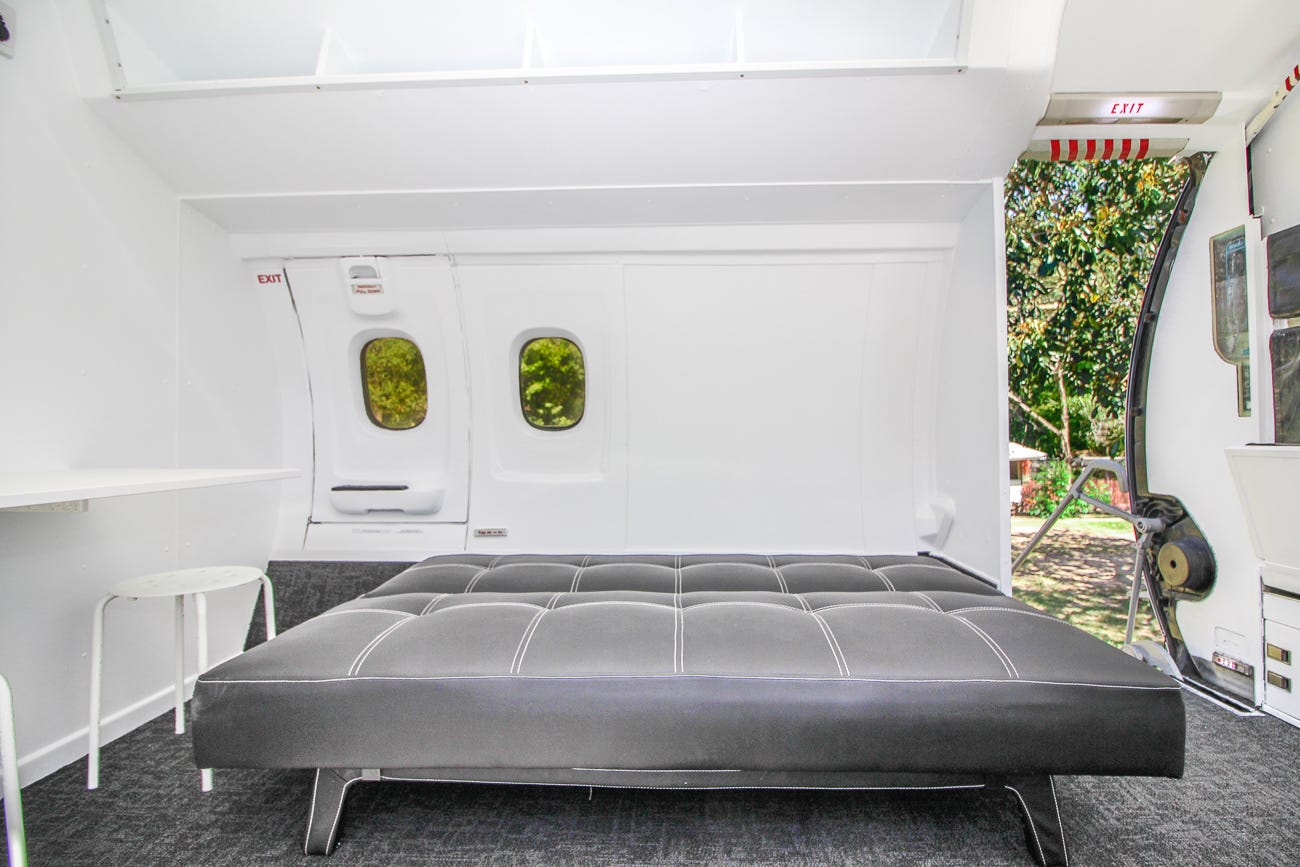 “We removed the seats to allow for more room,” Keel said.

The kitchen is minimal but has a sink, white cabinetry, and space for a mini-fridge. 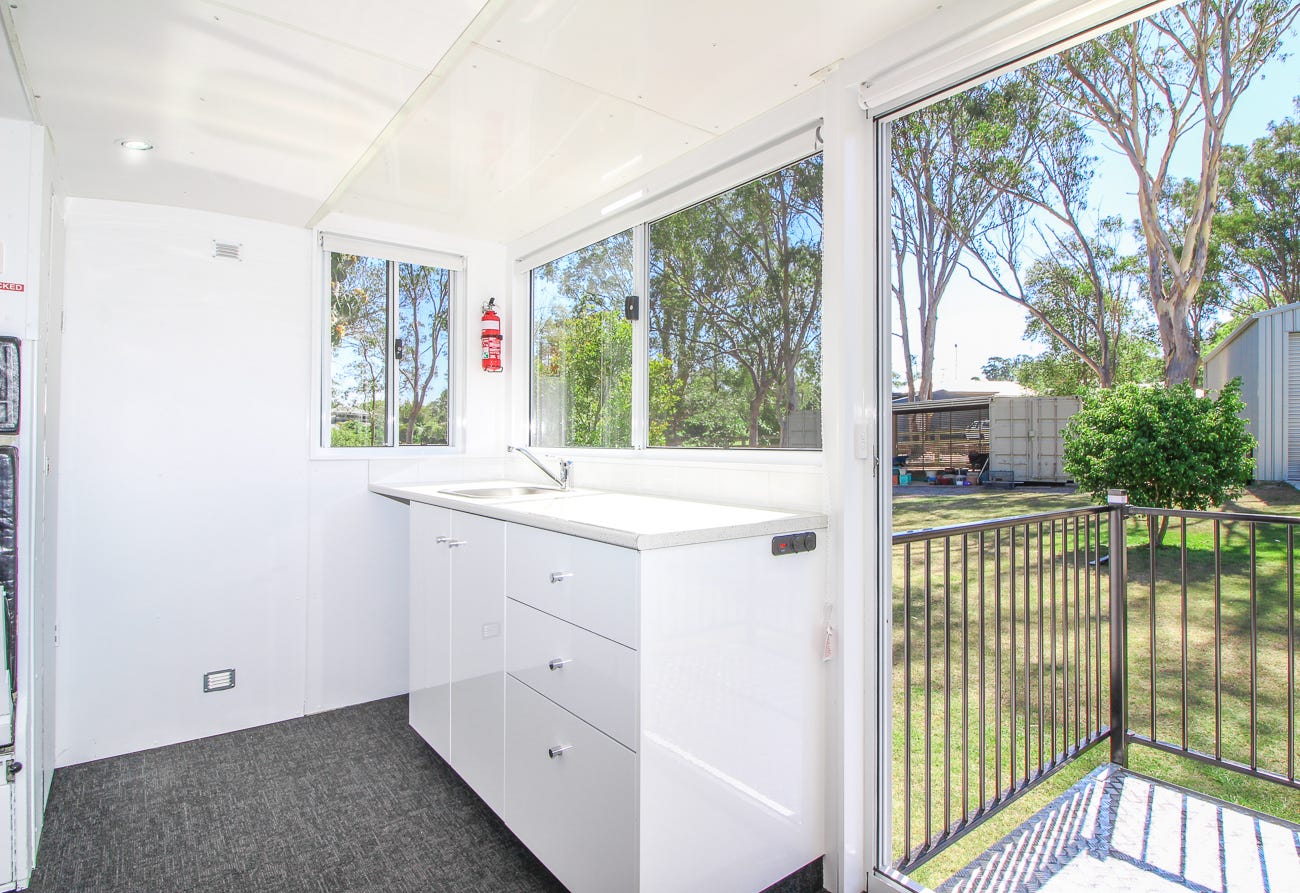 There is a hot water tank and pump underneath the floor, and the rest of the house’s electricity operates on solar energy and batteries.

At the back of the house, you will find the bathroom. 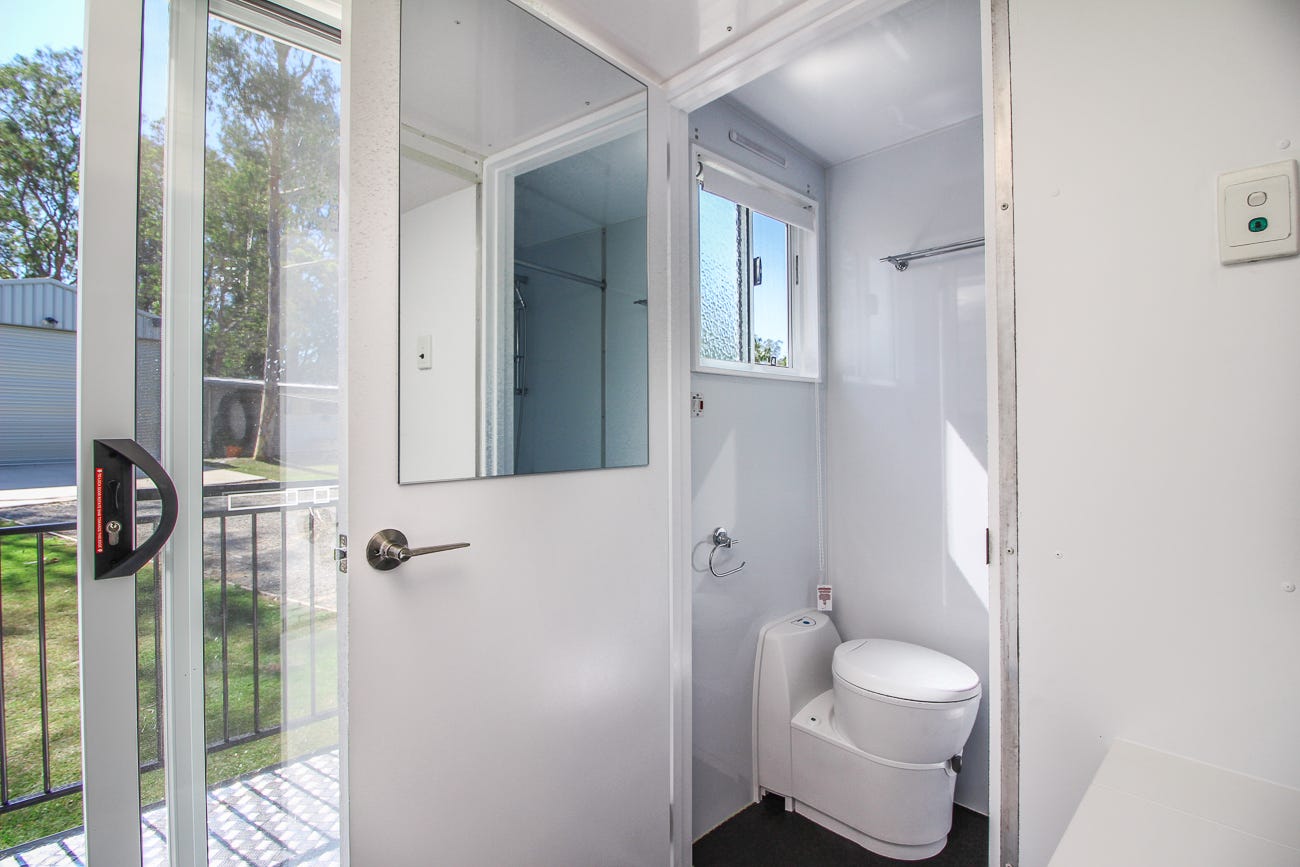 “We have added a bathroom including toilet and shower to where the external rear stairs once were,” Keel said.

Some of the plane’s original structures still remain. If you look closely, for example, you can see the flight attendant jump seat next to the door. 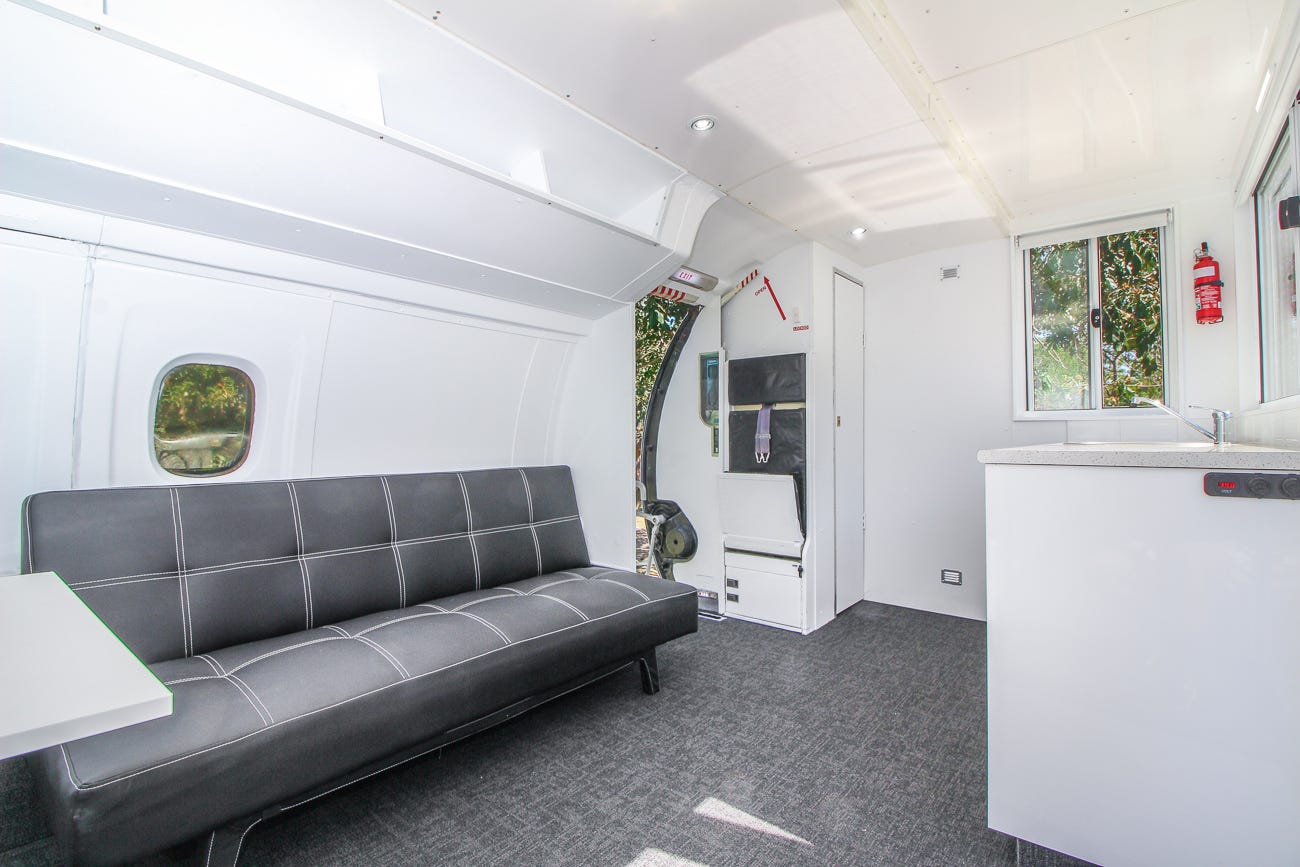 The emergency exit window was also kept in the redesign, and you can see it just above the couch.

Some of the original signage has also remained. 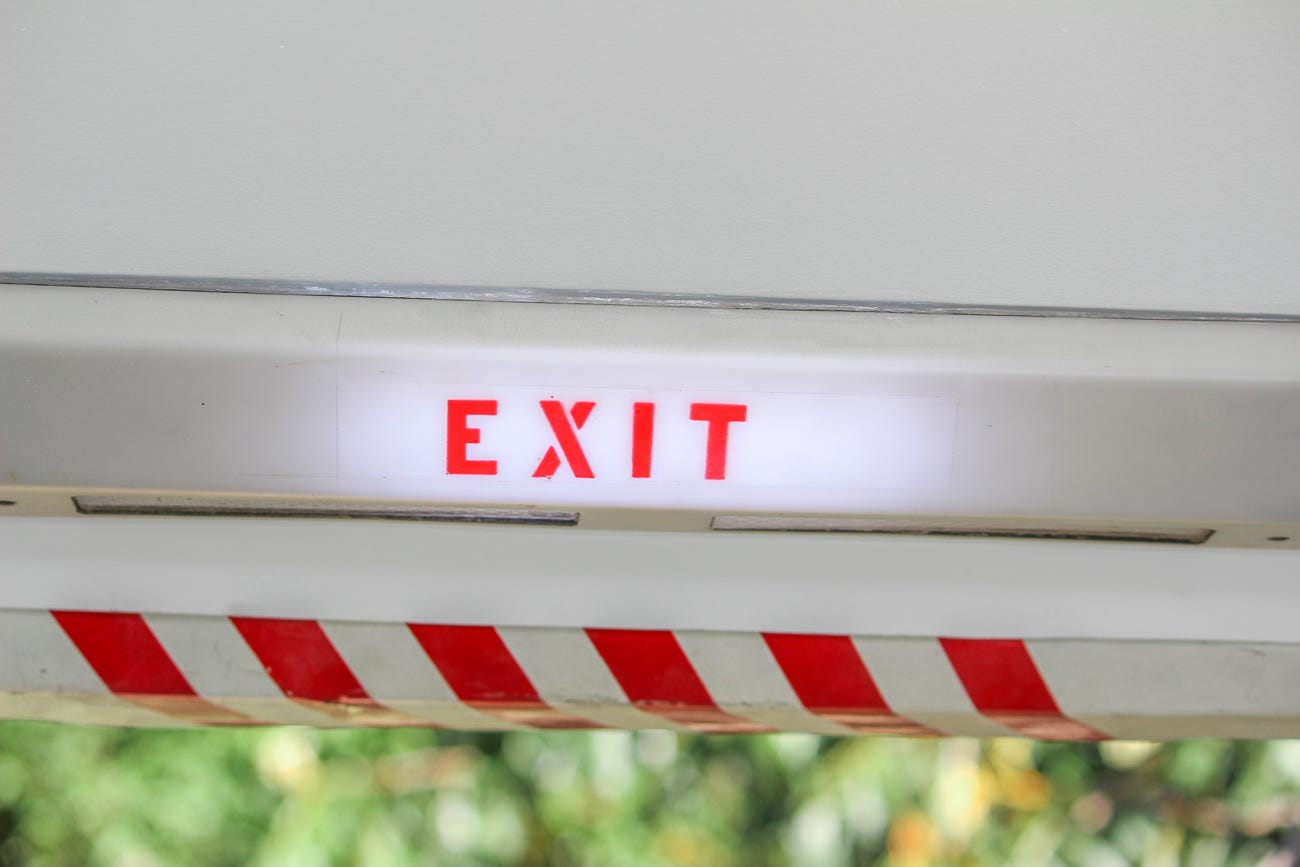 The “exit” sign and the illumination strips can be seen throughout the tiny house. 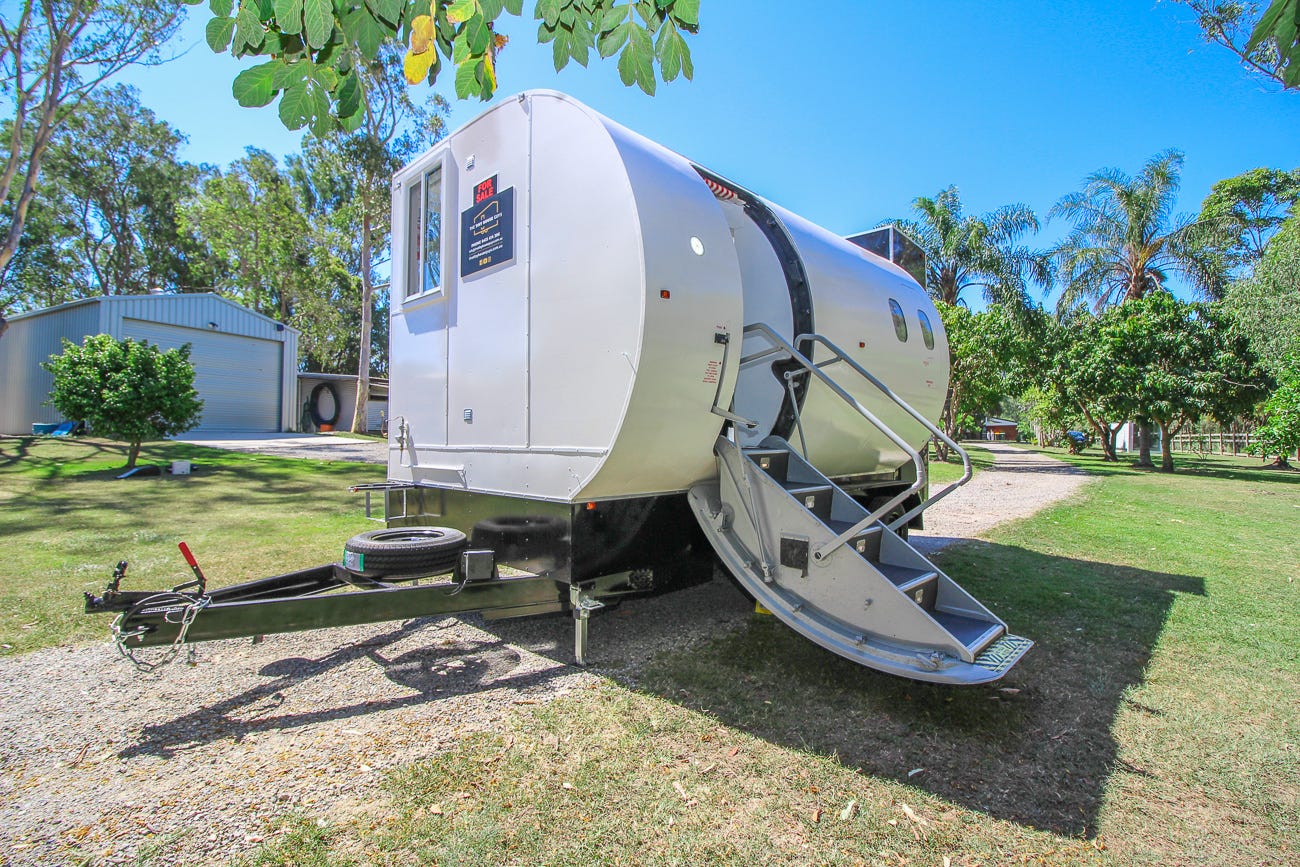 “The Tiny Aero is a one-off build, and we think it would have to be Australia’s most unique tiny home,” Keel said.