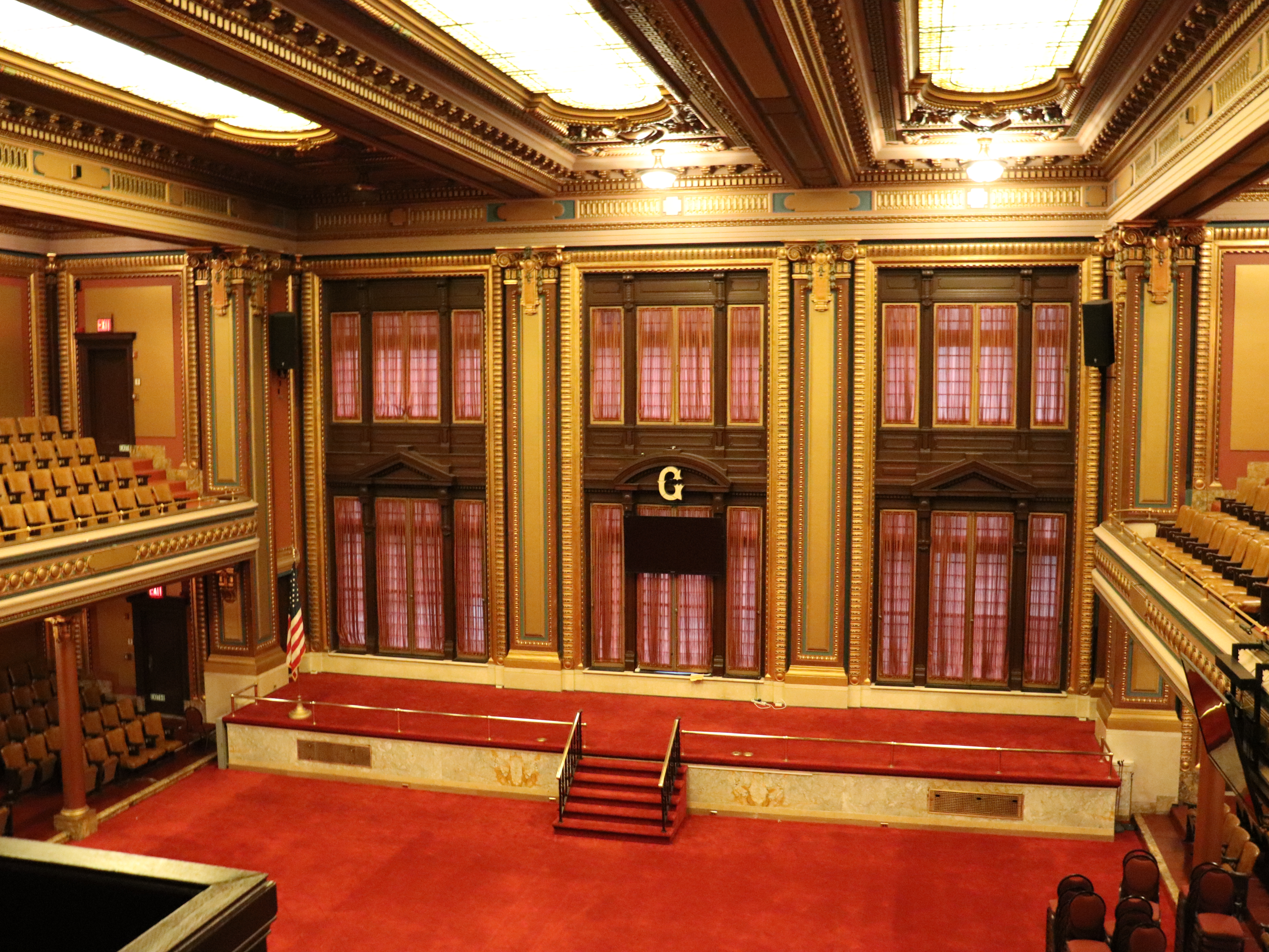 There are six million Freemasons living in the world right now.

With a number that high, it should be easy to find out what exactly a Mason is and what they believe, but the organisation has a reputation for keeping tight-lipped about what goes on behind closed doors.

Freemasonry can be traced back to the medieval ages, but there are still lodges all over the world that host meetings. In fact, New York City is home to the Grand Lodge of New York, the headquarters for the state. Incredibly, despite being one of the most secretive organisations in the world, they welcome guests into the building every day for tours.

Insider took one of these tours and saw firsthand where all their meetings take place. Keep reading to find out what it’s like inside.

Located in the Flatiron neighbourhood of New York City, the expansive Grand Lodge of New York blends in with the buildings that surround it. 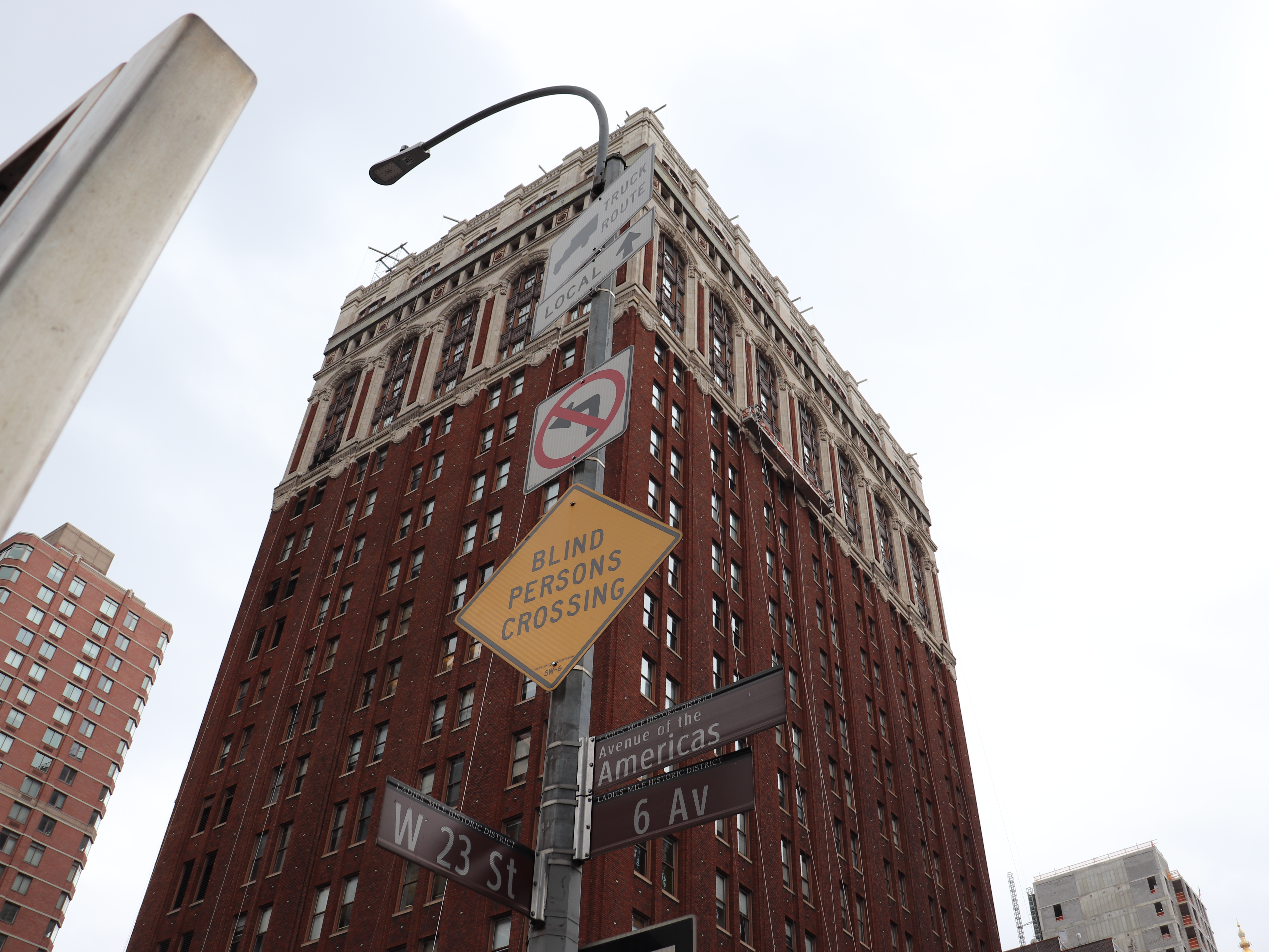 Save for a Freemason flag that hangs outside the building, the temple is largely nondescript. Located on 23rd street, the massive building takes up an entire city block.

From the street, the Masonic Hall looks like a normal building, lined with windows. At night, however, there are no lights that come from those windows because they are a facade. The Freemasons blocked out the windows in this building to protect their privacy.

Even the front entrance looks completely ordinary on the city block. 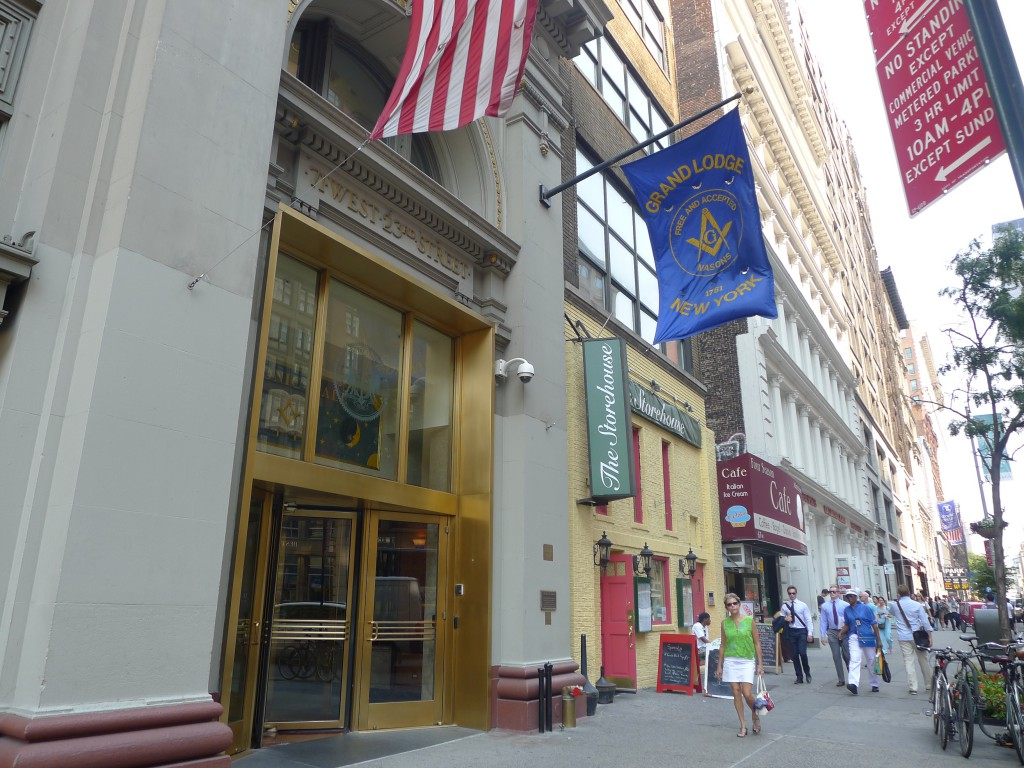 Lydia Warren/ InsiderEntrance to the building.

This photo was taken in 2013, as the front entrance is currently surrounded by scaffolding.

Once inside, I noticed the lavish decor of the lobby, which foreshadowed the elaborate rooms found in the rest of the building. 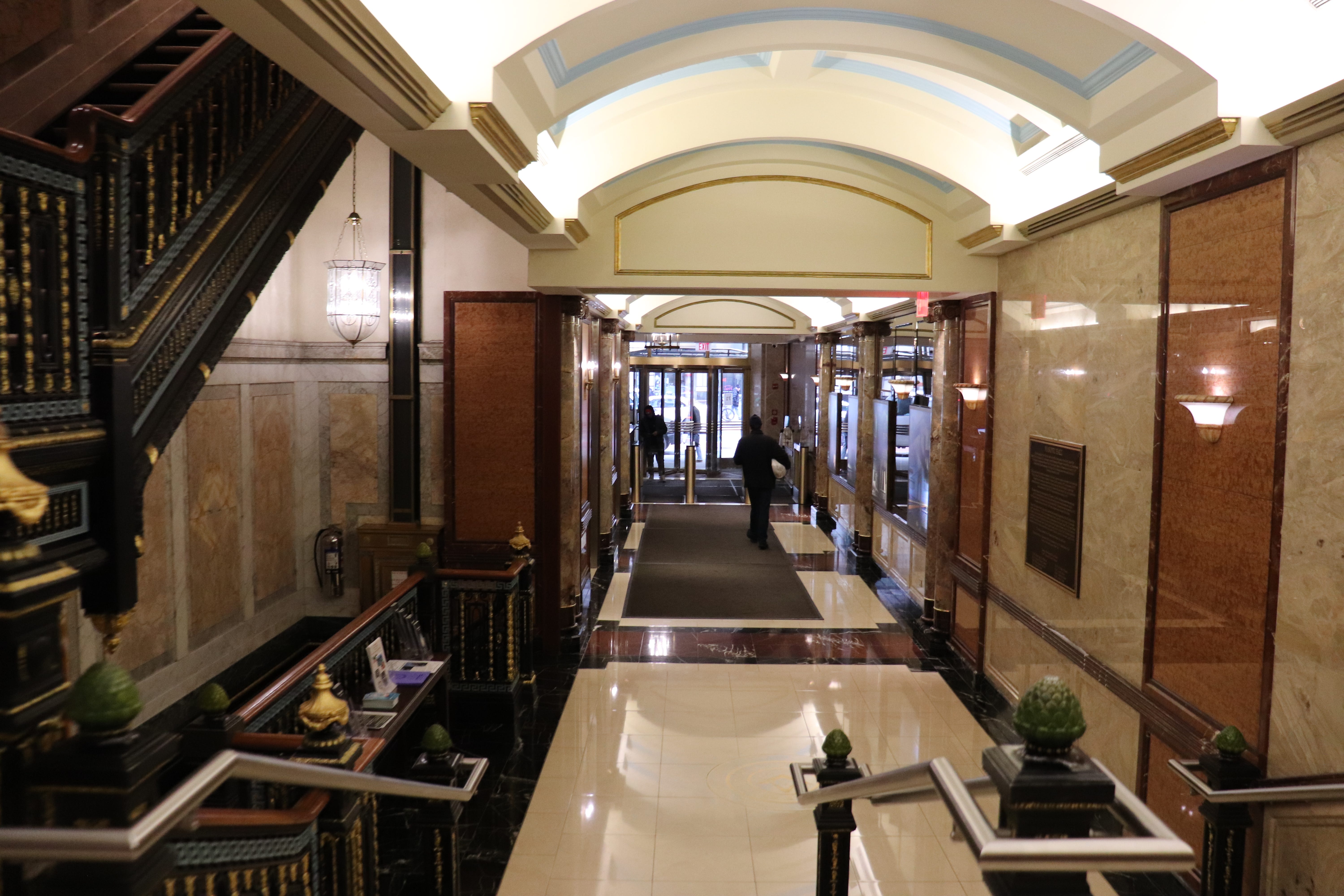 Although the Freemasons in New York date back to the 18th century, the building itself was built in 1913 by Harry P. Knowles, who was a Mason.

The lobby itself may seem like an ordinary entrance into a building in New York, but if you look closely, you can see Masonic symbols throughout. 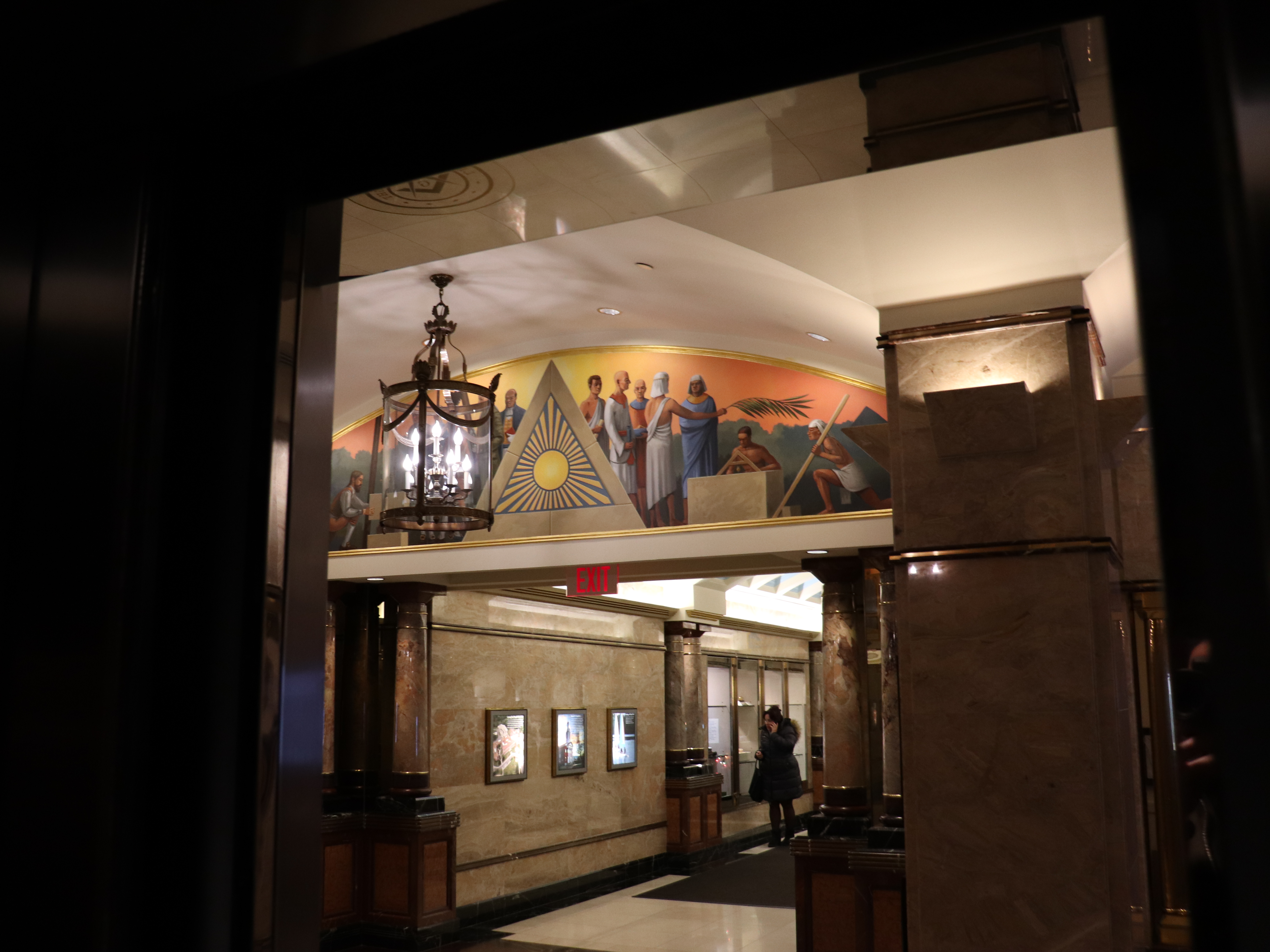 Freemasonry dates back to medieval times and started as a social organisation similar to a male fraternity. Through the years, Freemasons earned a reputation as a secret organisation, leading to conspiracy theories that the group is behind many of the world’s biggest historical events.

It is widely known, however, that the organisation uses symbols and imagery to communicate their ideas – like the large triangle that you can see in the entryway in the picture above.

Another important symbol in Masonry is the letter “G,” which stands front and centre in the building’s main attraction: the Grand Lodge Room. The Grand Lodge Room is a three-story meeting space and the building’s largest room. At the front and centre of the room, you can see a large letter “G” hanging on the wall.

First, it stands for “Great Architect of the Universe,” which is loosely interpreted as God. Although Masonry is not a religion and does not promote one religion over another, members must believe in a higher being also known as a Great Architect.

Second, the “G” also stands for “geometry” because the organisation was born out of science and architecture. Masons believe geometry is the most noble of all the sciences.

When all the Masons in New York state come together, they meet in the Grand Lodge Room. The room seats 1,000 people and can be rented out to the public. In fact, movies, TV shows, and even New York Fashion Week has used this space.

Most interestingly, the stained-glass ceiling in this room was the inspiration for the ceiling aboard a hall on the Titanic. 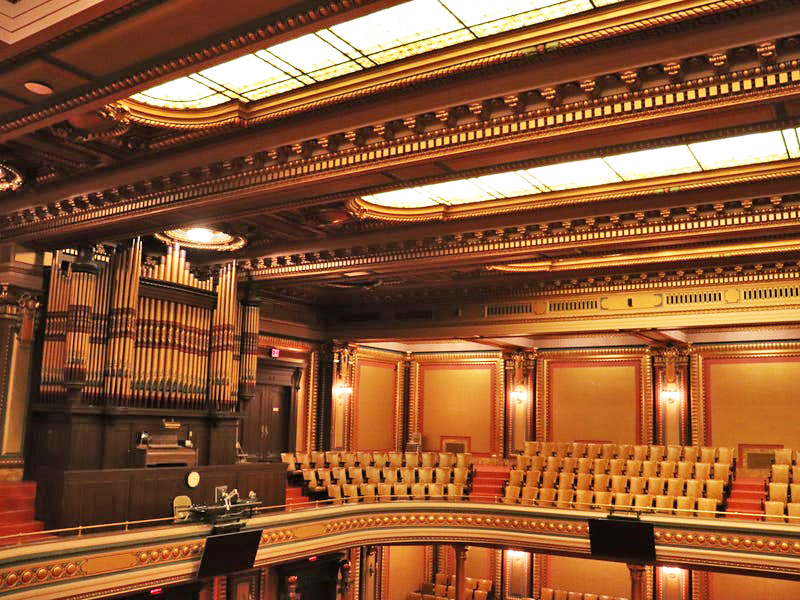 Frank Olito/ InsiderThe ceiling and the organ in the Grand Lodge Room.

The Hollander Room is another grand space in the building and it pays tribute to one of the organisation’s most famous members: George Washington. George Washington was a Mason throughout his presidency, often attending lodge meetings and writing letters to his other Mason brothers. A statue of the first president presides over the room, which can fit about 20 people for formal meetings.

Washington was considered the highest level Mason, known as Master. All members of the organisation go through three stages: Apprentice, Fellowcraft, and Master.

In this room, you can find bookcases filled with rare books and the lavish decor even reaches the ceiling. From mahogany wood bookcases to intricate patterns on the ceiling, it’s clear from this room that the Masons value beauty in architecture. Although only six of the meeting rooms were accessible, there are 12 in the building. The 60 Freemason groups that operate in this building rent out any of these rooms for gatherings and meetings.

Above each doorway, there is a gold plate that shows the name of each room before you enter. 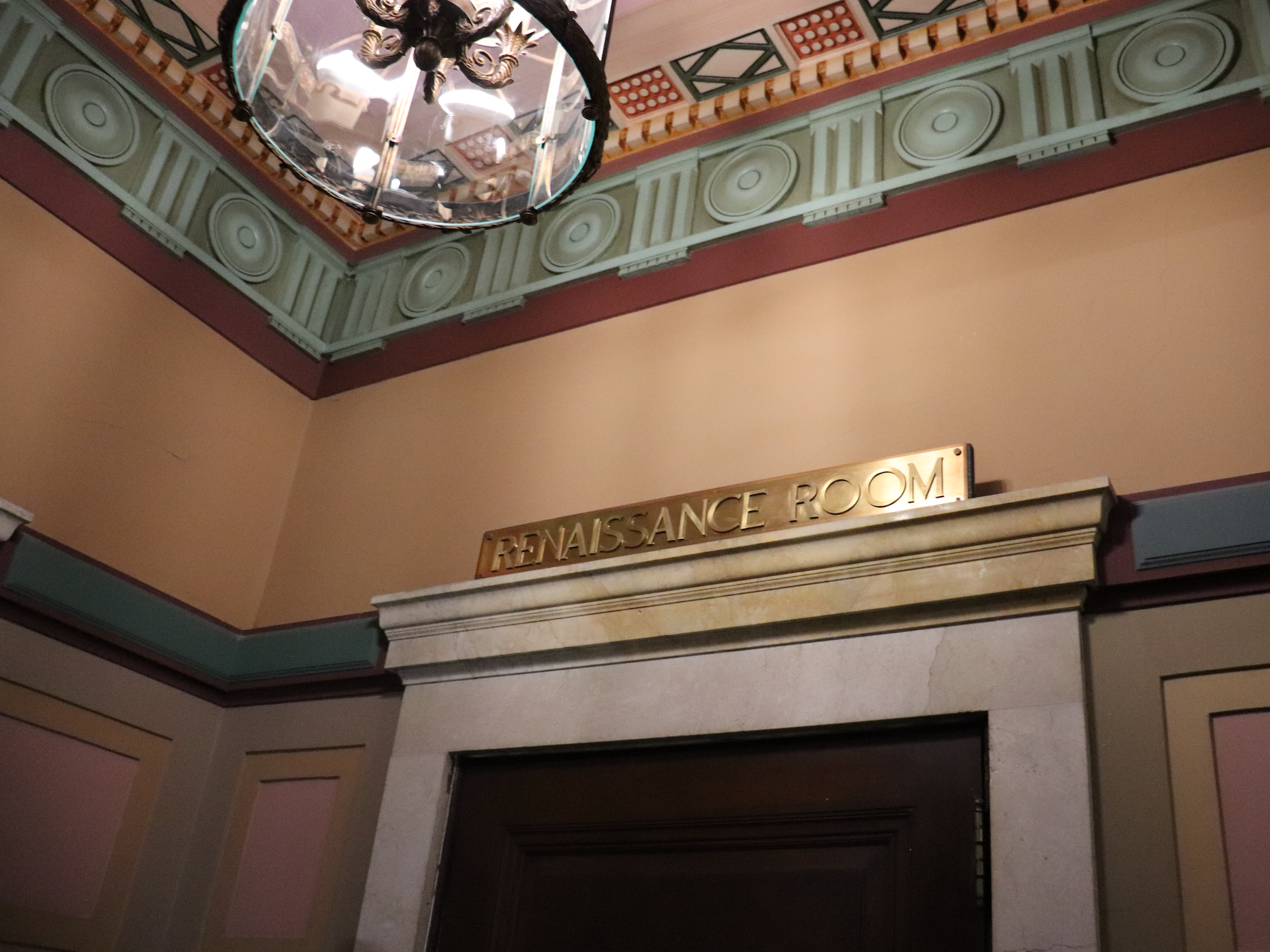 Although we were allowed to tour the Renaissance room, the tour guide would not reveal exactly what happens when Masons meet in these rooms.

The Renaissance Room is considered one of the most beautiful rooms in the world, according to the Freemason tour guide. All the smaller lodges in the building are decorated with certain themes. The Renaissance Room is stylised as if it’s a room from the Italian Renaissance.

If you look closely at the ceiling of the Renaissance Room, you can see depictions of Renaissance women — the only place you will see women throughout the building. One of the most important ideals in Freemasonry is the idea of self-improvement. To become a better self, they believe men should tap into their feminine side and think with their minds instead of acting with their masculine side and using their muscles. They believe the feminine side of men is the stronger side. This depiction of the women on the ceiling is a symbol of that belief.

However, the Freemasons do not allow women to join the organisation. There are some lodges that do allow women because each lodge operates independently, but the Grand Lodge of New York is not one of them. They do allow gay men to join.

The Colonial Room is decorated in colours that were popular during Colonial America: blue, white, and soft red. 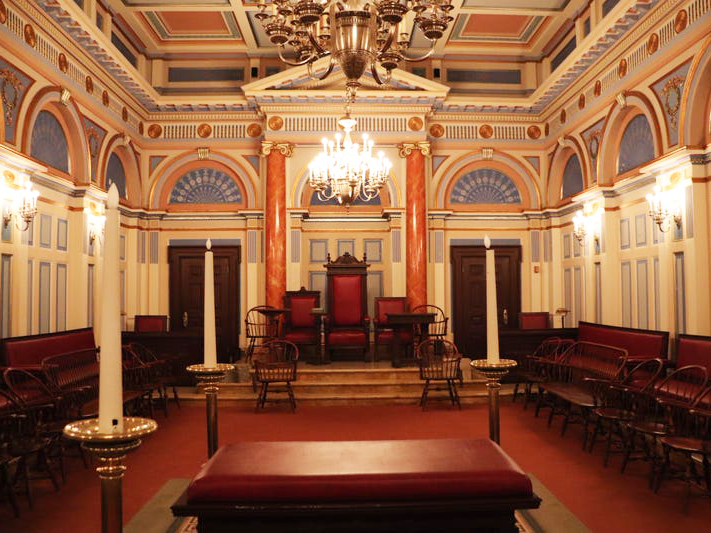 At the front of the room, there is a pyramid shape close to the ceiling. That symbol is seen throughout Masonic architecture because it represents knowledge. The idea is that a triangle looks like an open book placed upside down. When it’s placed upside down, the knowledge of the book flows through the pillars and into the rest of the room.

Not every room has a pyramid front and centre, but every room in this building has the same exact setup. 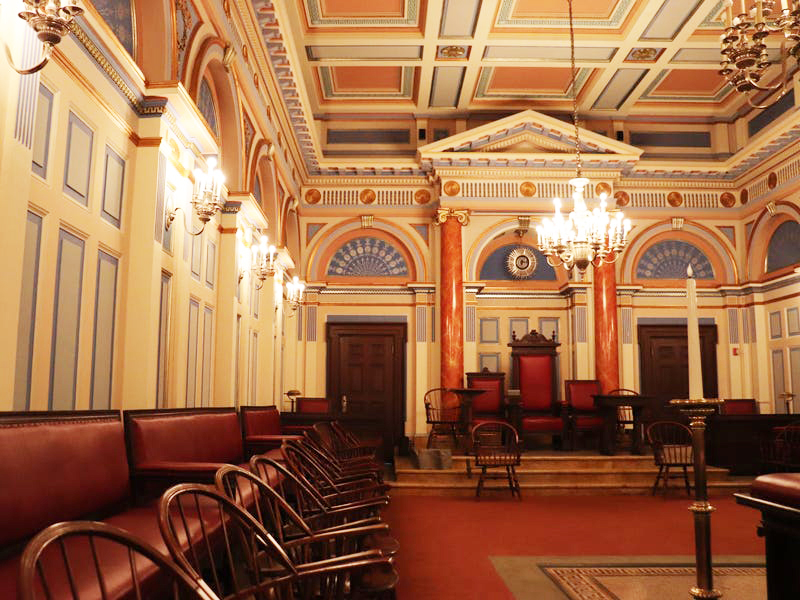 The president sits on the eastern side of the room, and there are three steps to his chair. The number “three” is an important symbol in Masonry and can be seen throughout the building.

The vice president of the lodge sits in the west end of the room in front of the organ, and there are two steps to his chair. 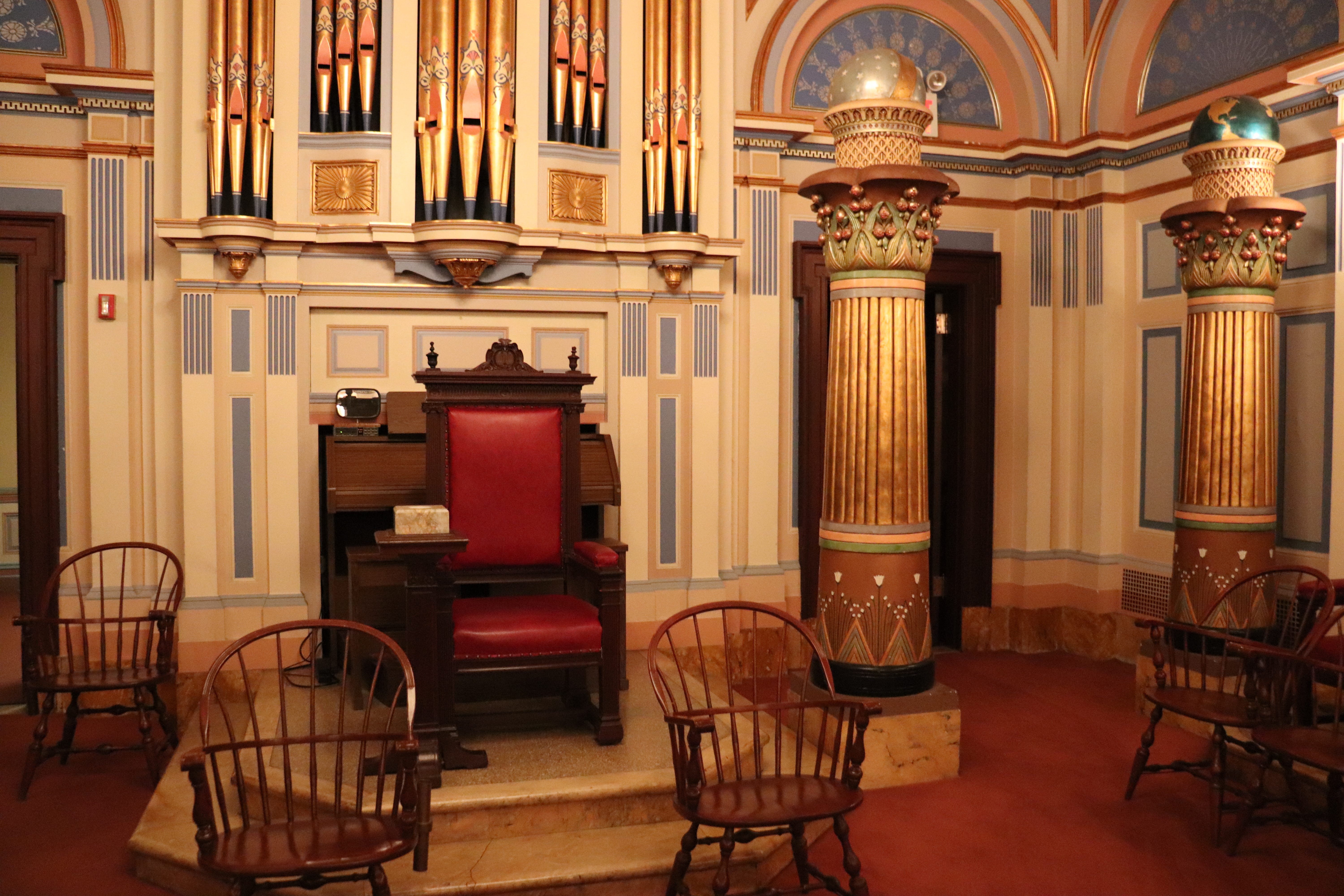 To the right of the president’s chair, there are two pillars. At the top of one, there is a sphere that represents heaven, and on top of the other, there is Earth. The Freemasons walk into the room through these two pillars because it’s believed everything that happens in life happens between heaven and Earth.

In the centre of each room, there is a padded table that is reserved for praying. Masons place their Bibles – or whatever text they believe in – on top and then kneel in front of it. The number three motif continues here, as there are only three candles that surround the praying area.

The same setup can be found in every room in the building, including the Gothic Room. The Gothic Room is modelled after Sainte-Chapelle in Paris and is heavily influenced by French architecture.

Each of these spaces has fake windows to ensure no one can see in and learn what happens behind closed doors. In fact, the stained-glass window at the front of this room is using artificial light.

Although the public does not know exactly what happens in these rooms —including their rituals or what they talk about — there are small hints about what occurs throughout the space. Next to each president’s chair, for example, there is a piece of stone that is worn down in the middle. The stones are for gavels, used much like a judge in a courtroom.

In other parts of the building, you can see how the Freemasons are welcoming the public into their space. 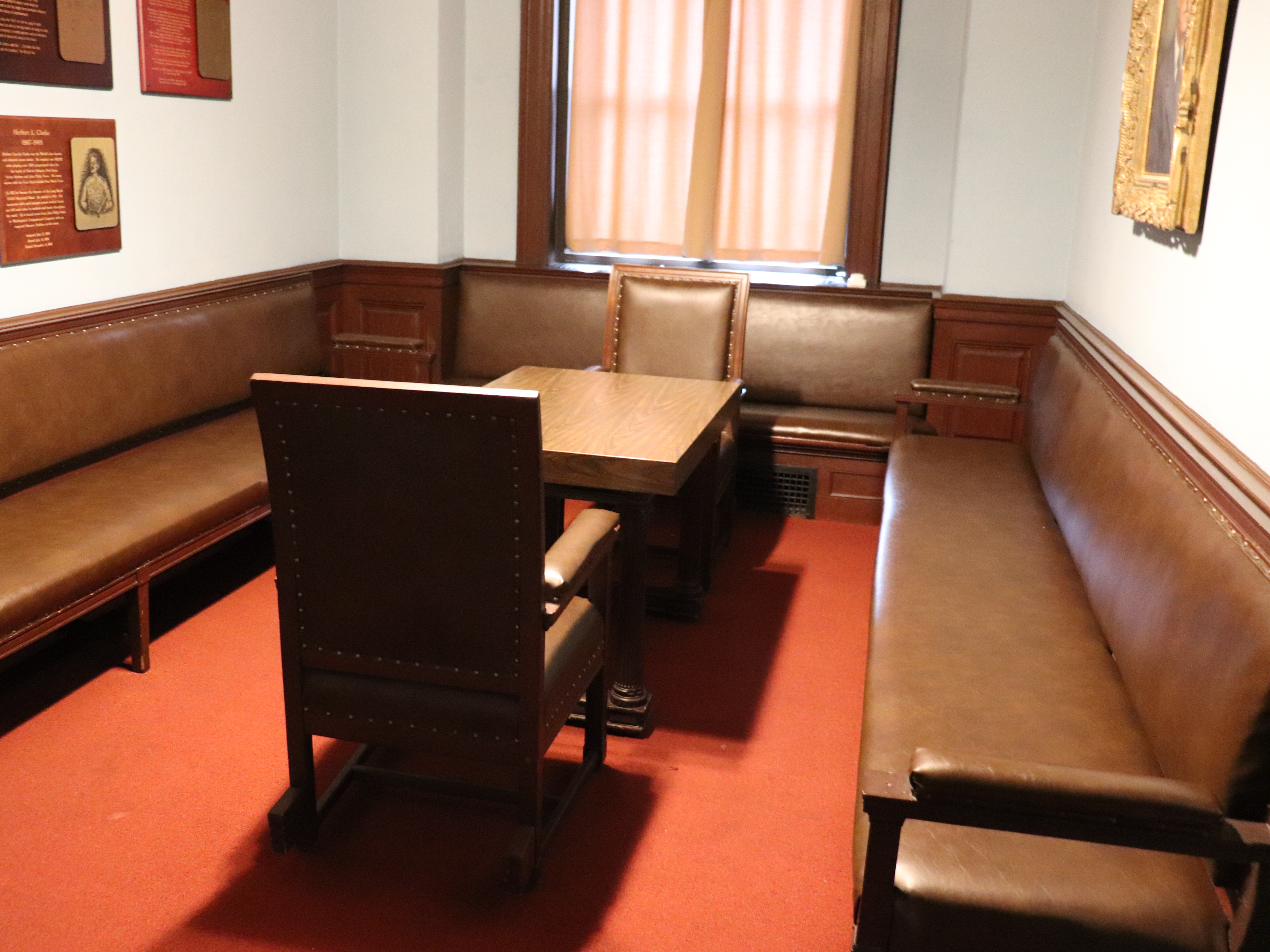 Members use this room to have small meetings or to hang out if they are early to the meetings.

To become a Mason yourself, you have to ask a current Mason, and they will give you an application. After that, three Masons will come to your house and interview the most important person in your life, which is typically your spouse. If approved, you will start out as an Apprentice.

But the general public can rent out this space for free even if they have no intention of becoming a Freemason themselves.

This is the room where the Freemasons come to eat before their meetings. People can also rent this space out for events. In all, the Grand Lodge of New York is the perfect display of the Freemasons’ use of symbolism, love of architecture, and desire for privacy. 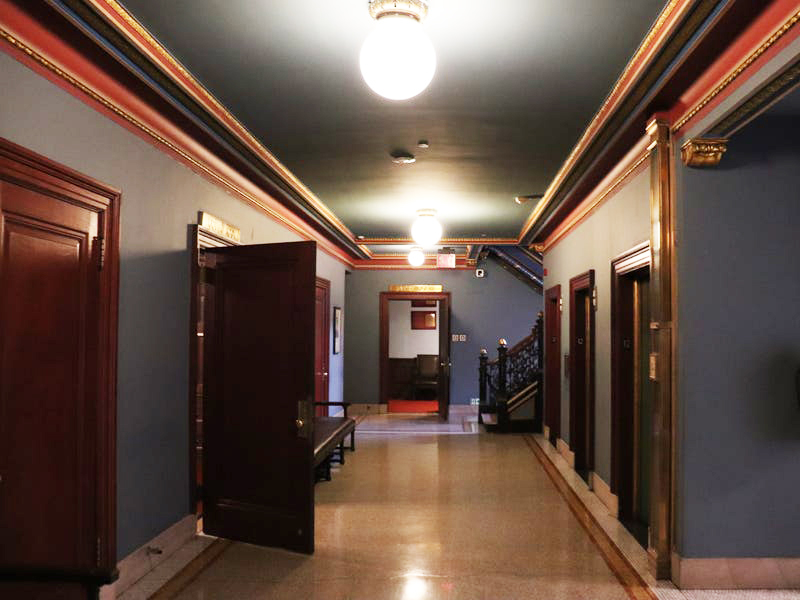