A couple lives with their 3 children in a 300-square-foot tiny home that cost them $24,000 to build. Take a look inside. 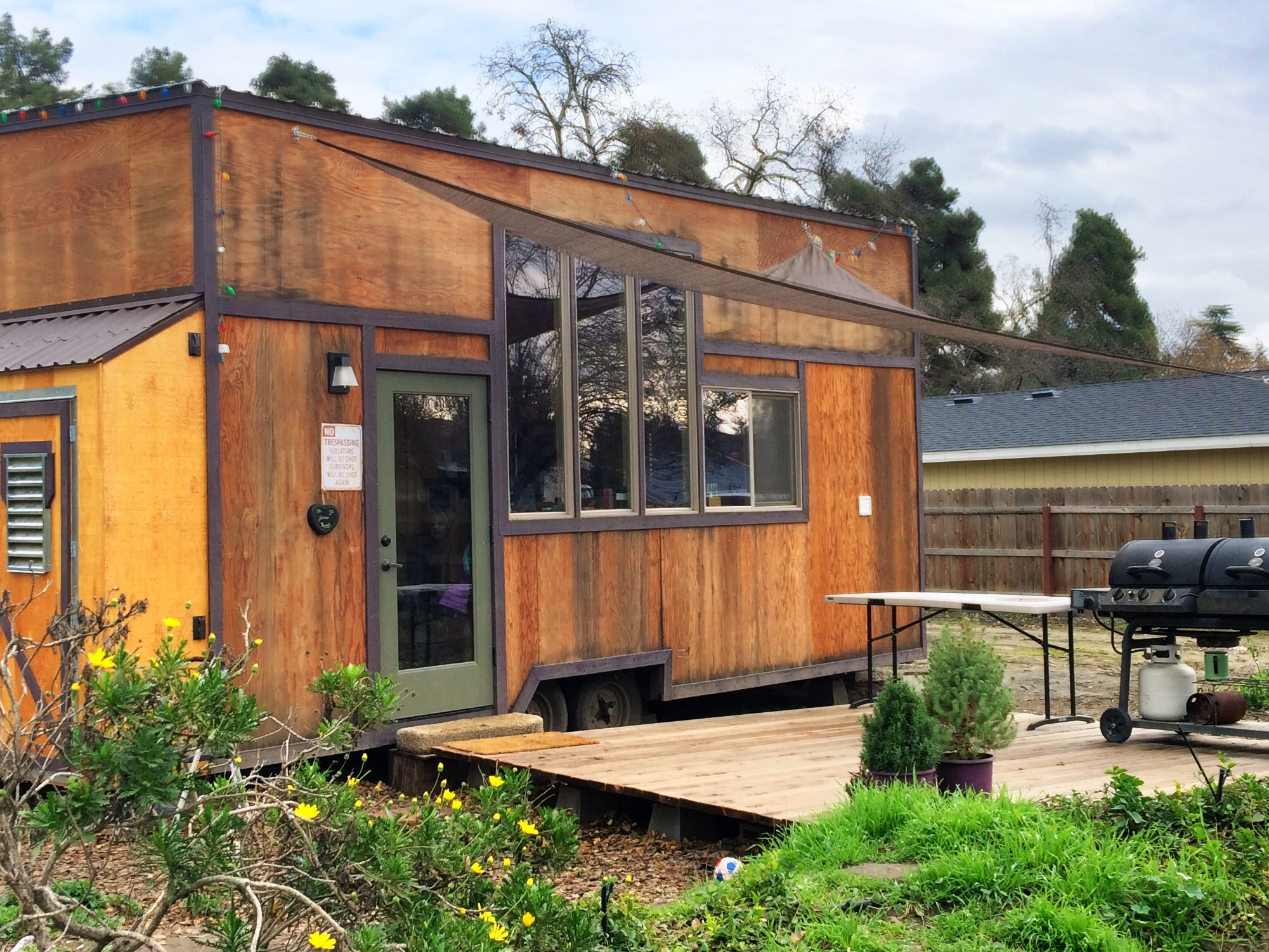 Courtesy of Kathrina JonesA family of five lives in this tiny house.

Raising three children already comes with a set of challenges, but living together in a 300-square-foot tiny house takes it to a whole other level.

Kathrina and Forrest Jones have been living with their three children – Elizabeth, 9; William, 7; and David, 4 – for the past three years in a tiny house. With just two bedrooms and one bathroom, this family makes their tiny living space work for them.

Here’s what it’s like inside this non-traditional family home on wheels.

Kathrina and Forrest were originally living in a 2,600-square-foot home with two children, but they weren’t happy. So they decided to downsize. 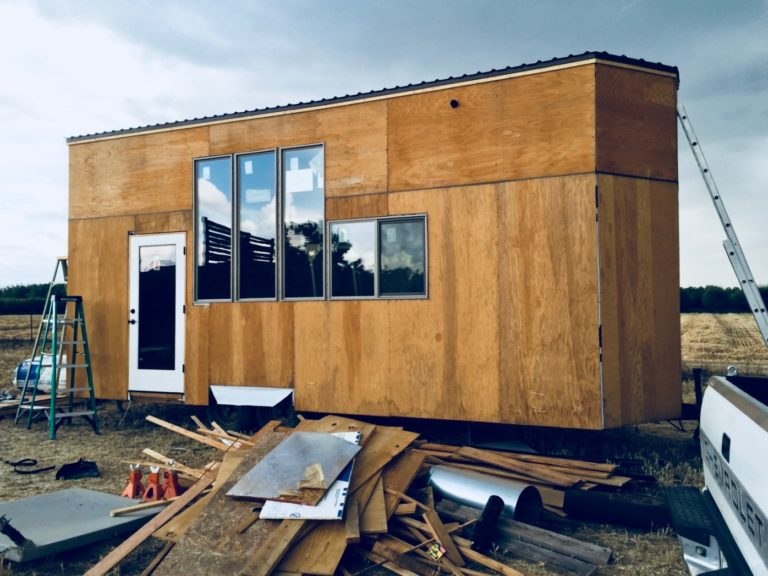 The couple lived in a converted 1918 red brick schoolhouse, which Kathrina described as “magazine perfect.” But the couple wasn’t happy because they were working all the time. Kathrina was working as a teacher but wanted to stay home with the children, and the couple wanted to travel more.

They had talked about living in non-traditional homes since they got married, so Forrest started doing research and found the tiny house movement, which was in its early stages.

“It was a no brainer,” she said. “We had to figure out how to do it and then really do it.”

While pregnant with their third child, Kathrina and her husband started thinking about what their tiny house would look like. After selling their converted schoolhouse, the next step was to start planning.

“Forrest designed the house for the things that are important to us,” Kathrina said. “He designed it for our lifestyle.” 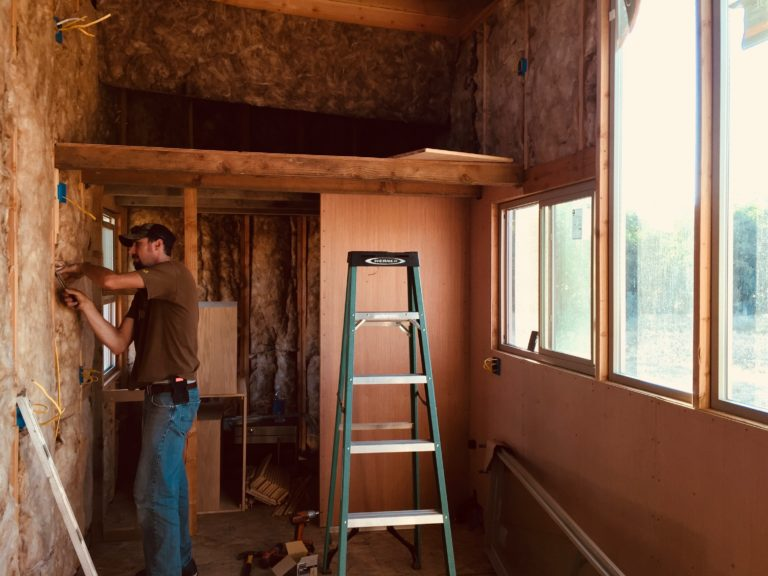 Although they employed some friends to help out with the building, Kathrina said the construction process took much longer than they expected.

Once finished, they parked their tiny house on a piece of land in California.

After selling their converted schoolhouse, they were able to purchase a piece of land in Visalia, California. They also decided to build an outdoor space on the land. 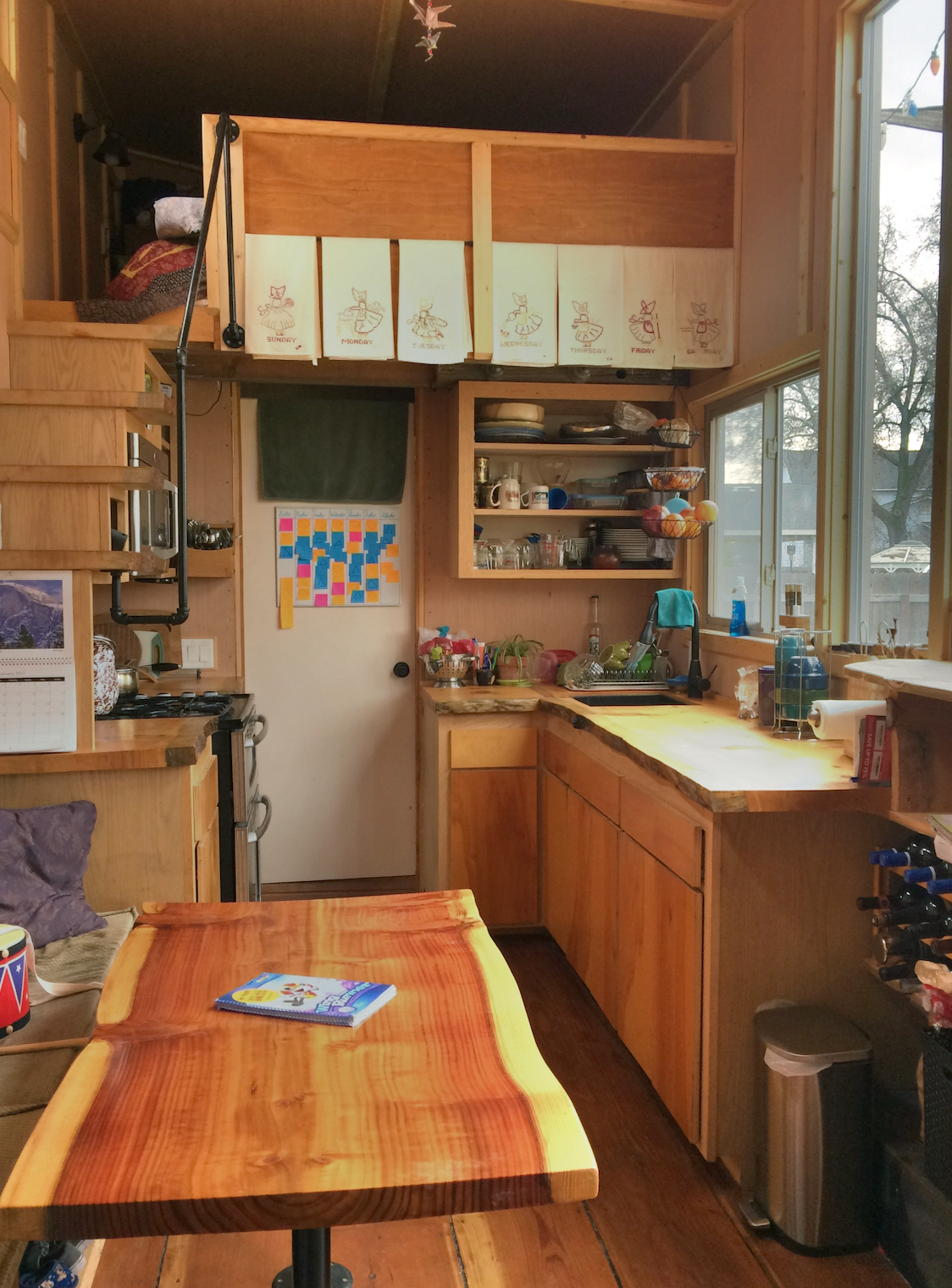 The walls, countertop, cabinetry, and table are all made from wood.

Kathrina said her kitchen was one of the most important features of the house because she’s a baker. 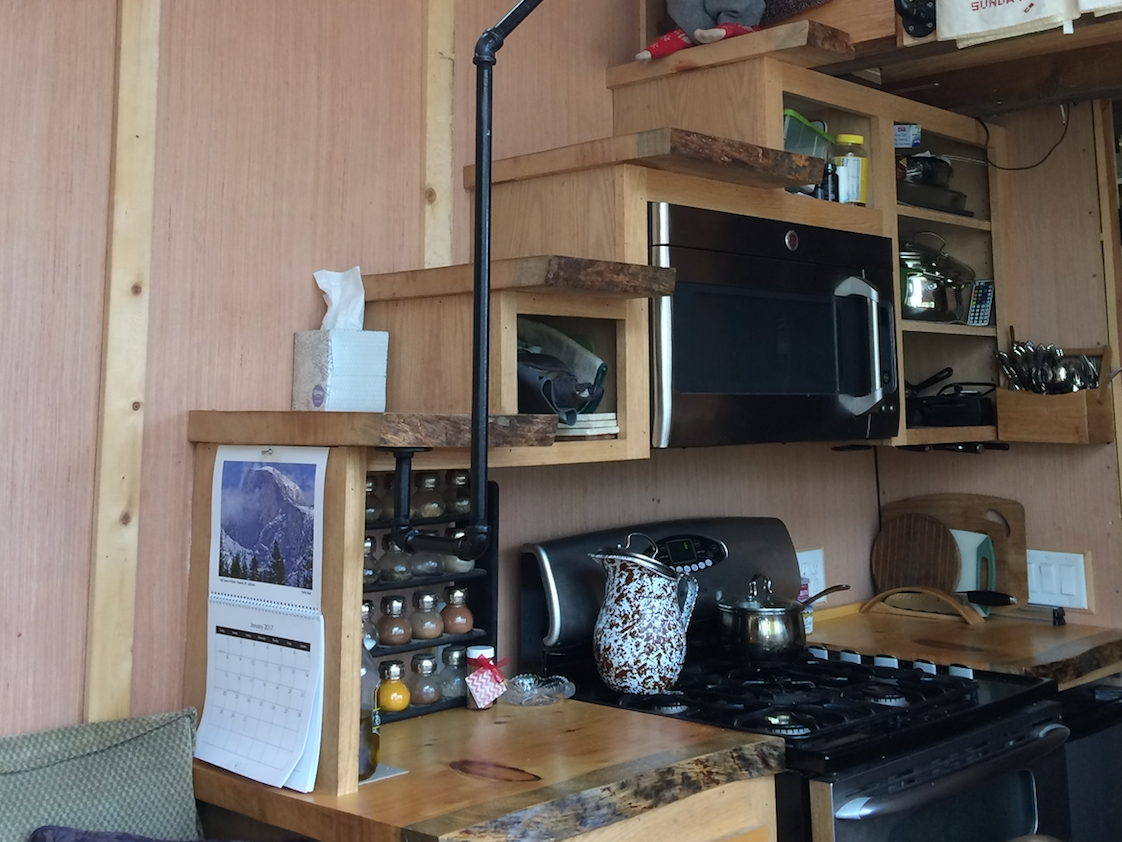 The kitchen has a full-sized, four-burner stove, and a microwave. There’s also a full-sized sink on the other wall.

The other side of the kitchen is covered in windows that look out on the property. There’s also plenty of counter space to prepare meals for the family.

The living space is opposite the kitchen and has a couch and table. 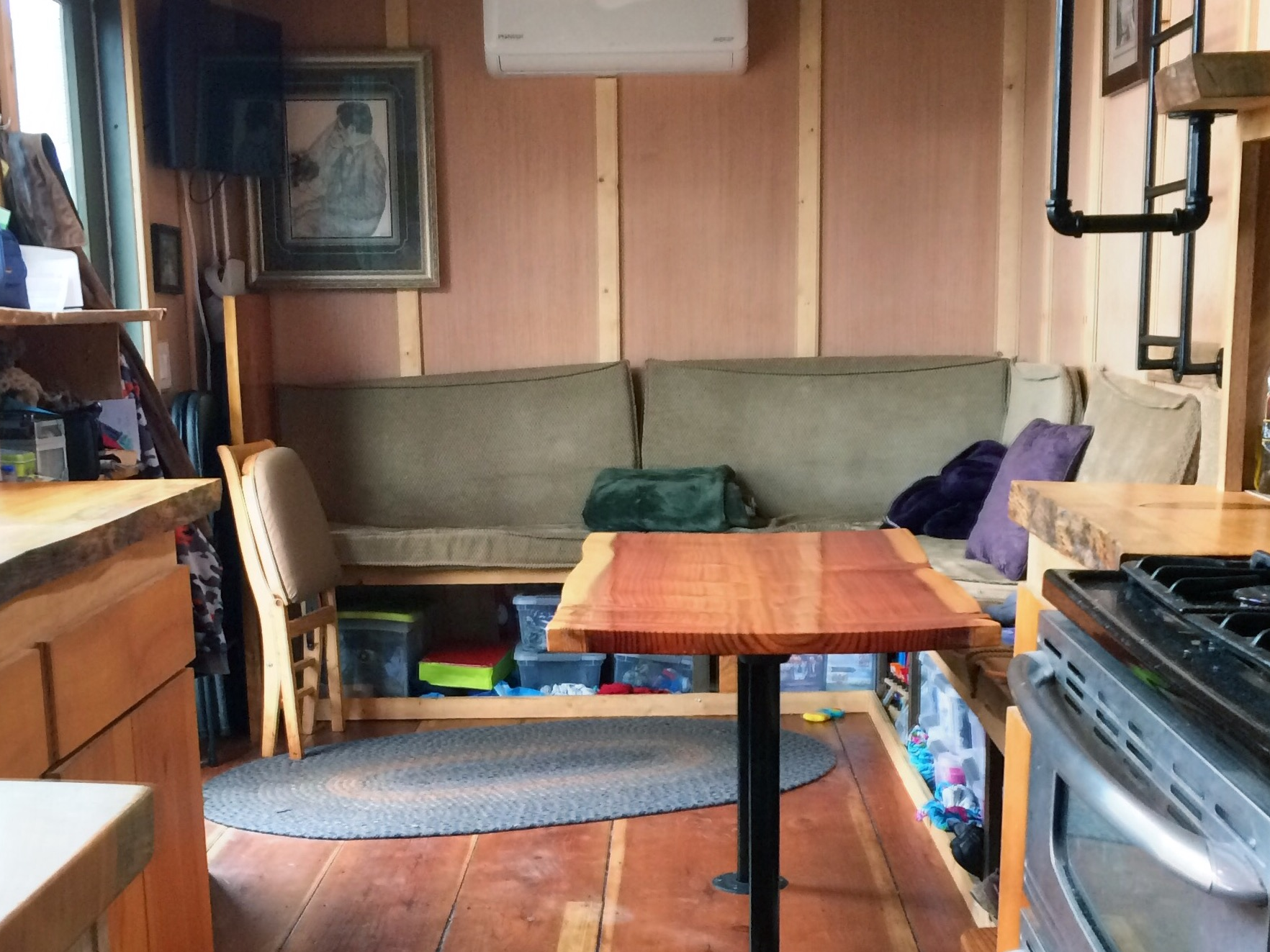 Plastic shoebox-size bins are under the couch and act as storage for the family. Kathrina said everyone in the family has two of these boxes.

Although it may look cramped to some, the family has actually hosted 12-person dinner parties. Courtesy of Kathrina JonesA dinner party in the tiny house.

It may be difficult to imagine hosting a dinner party with a dozen people in a tiny house, but Kathrina said it’s possible. When she hosted the dinner, it was a rainy day in December, so everyone had to be inside, but there were no issues.

Above the living room is the children’s bedroom, which has three beds. 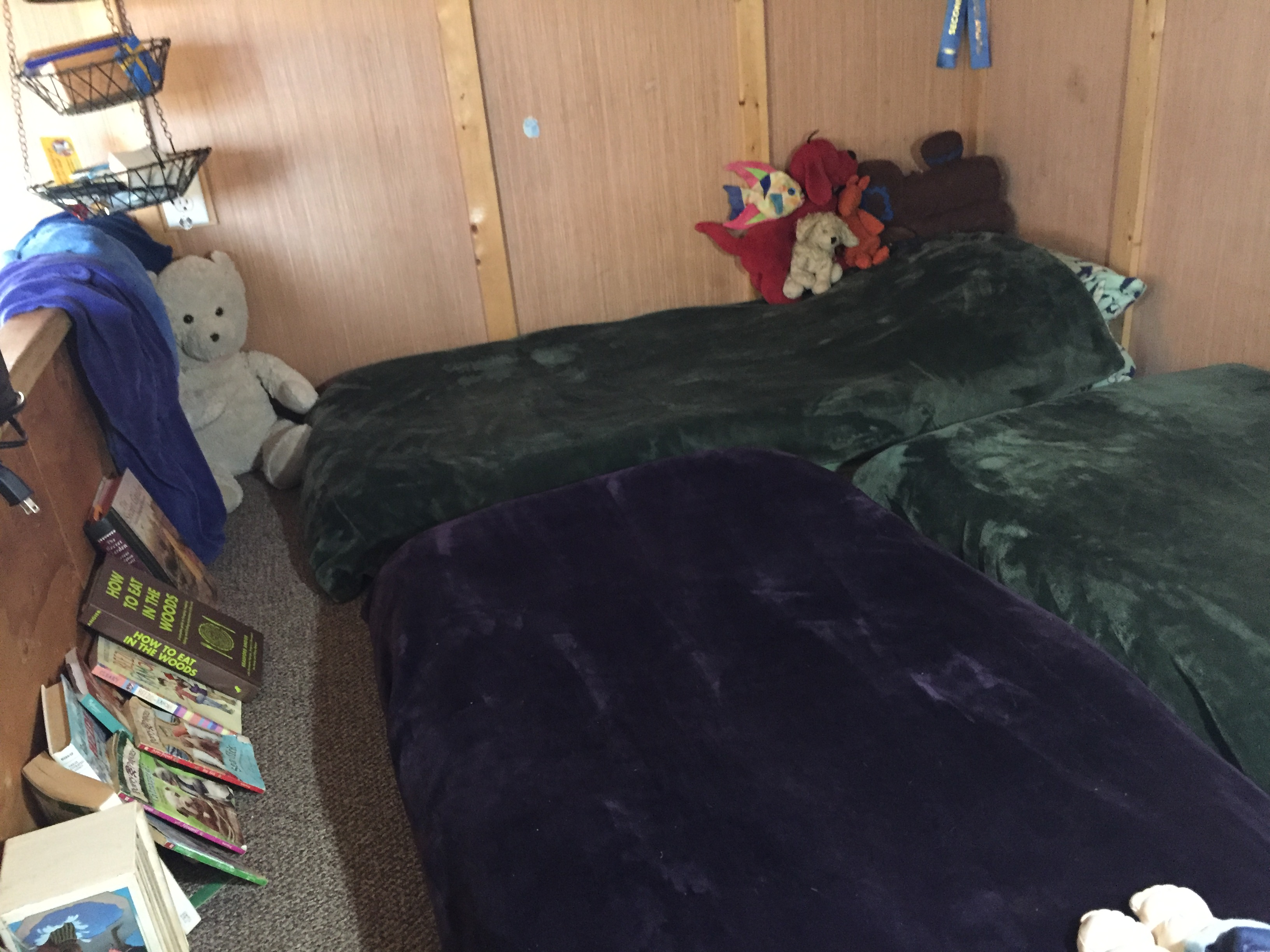 “They climb the ladder up to their bed, and [the kids say] it’s like living in a treehouse,” Kathrina said.

In a loft above the kitchen on the other side of the house, you can find Kathrina and Forrest’s bedroom. “You have to climb the stairs and climb across your bed, but that isn’t a big deal for us,” she said.

They have also created storage in the bedroom by installing a clothes railing.

The bathroom at the back of the kitchen is called a “wet bath.” 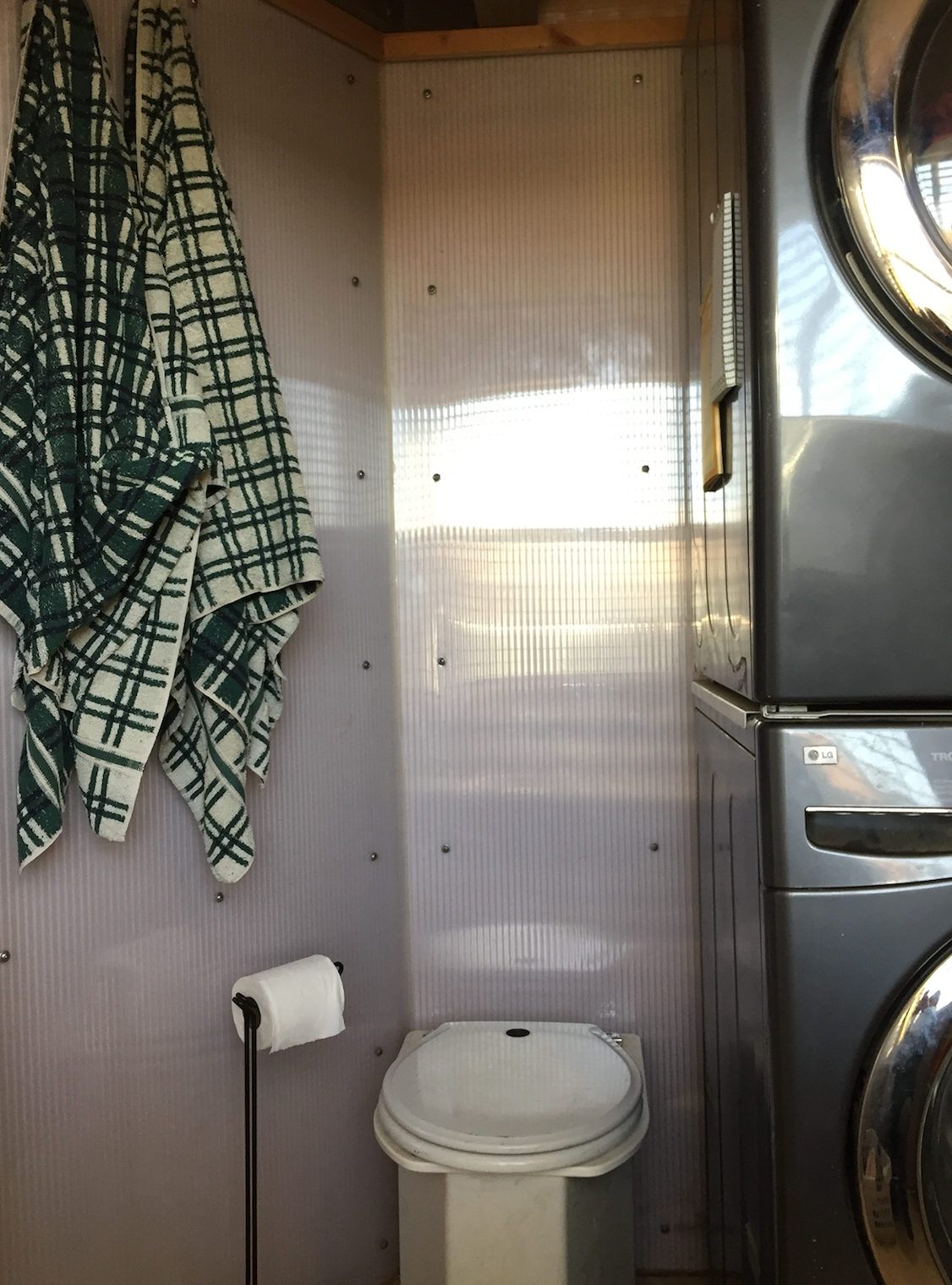 A wet bathroom is when there is no separate shower. Instead, you take a shower in the bathroom, getting all the walls and even the compostable toilet wet. Kathrina explained that they have a curtain that covers the washer and dryer when someone takes a shower.

With just one bathroom and two bedrooms, Kathrina said many can’t understand how her family can live in such a small space. Courtesy of Kathrina JonesThe Jones family at their table.

“People can’t fathom that this could work, but it’s honestly a choice,” she said. “We choose to make it work. We wanted to try it and found out, for us, it does work.”

But she admitted that it’s not always easy, especially with three young children who are all homeschooled. As a former teacher, Kathrina homeschools her three children in the tiny house, which means they are almost always together.

“It helps that we are happy and love each other, but they can annoy each other occasionally,” Kathrina said.

When it happens, she has to separate the children. At different times, the children can be in their lofted bedroom by themselves, or they can go outside.

Kathrina said the children have adapted to living the downsized life quite easily. Courtesy of Kathrina JonesThe children in their bedroom.

They regularly go through the children’s toys to make sure nothing is wasting space. In fact, the children often come to Kathrina on their own to tell her that they aren’t using certain toys anymore and that they should get rid of them so there’s more space.

Even though they are always on top of each other and have to continuously downsize, Kathrina said the children don’t want to live any other way. 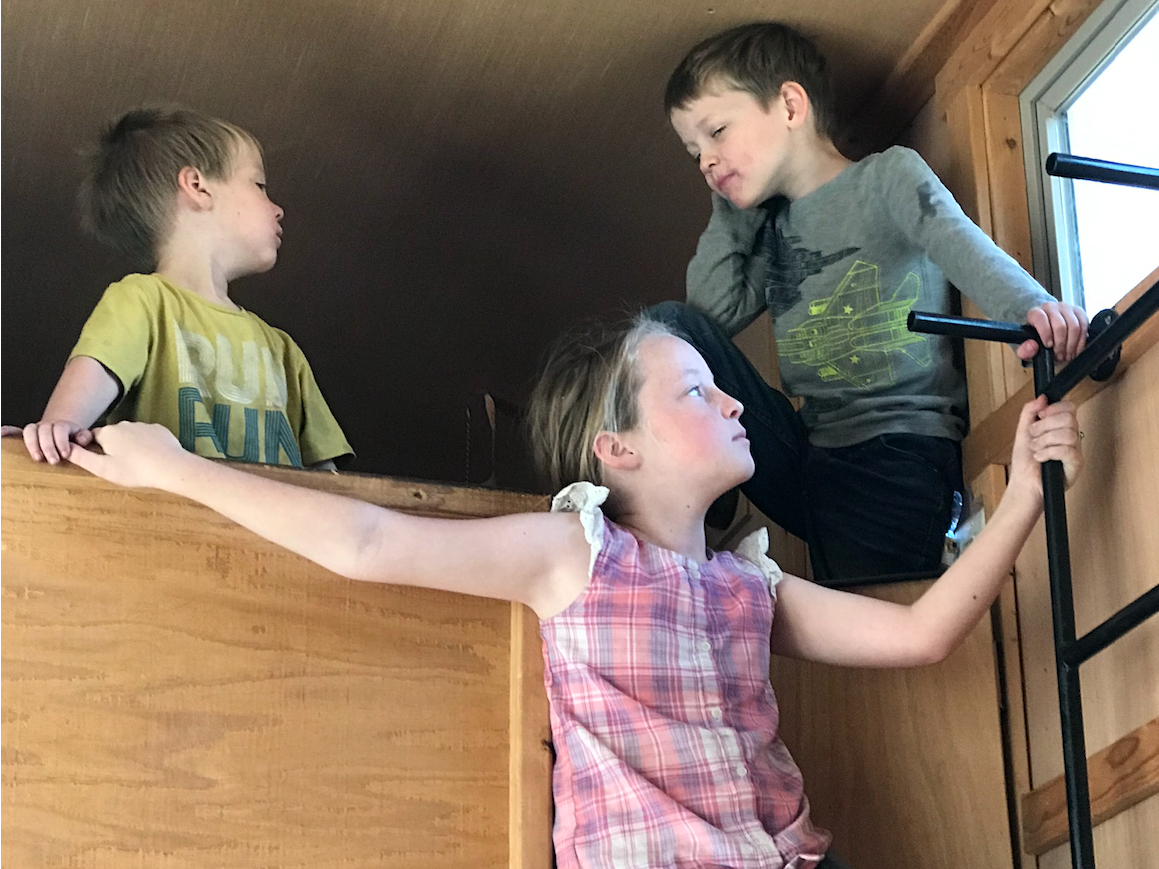 Courtesy of Kathrina JonesThe children on the ladder to their loft.

“We keep asking them, ‘Do you want to live in a normal house? We will get a normal house if this isn’t working for all of us,’ and they always say they want to stay in the tiny house,” she said.

In fact, Kathrina’s youngest, 4-year-old David, has never lived anywhere other than the tiny house.

In the future, they do plan on expanding their tiny house so that the children can have more space. 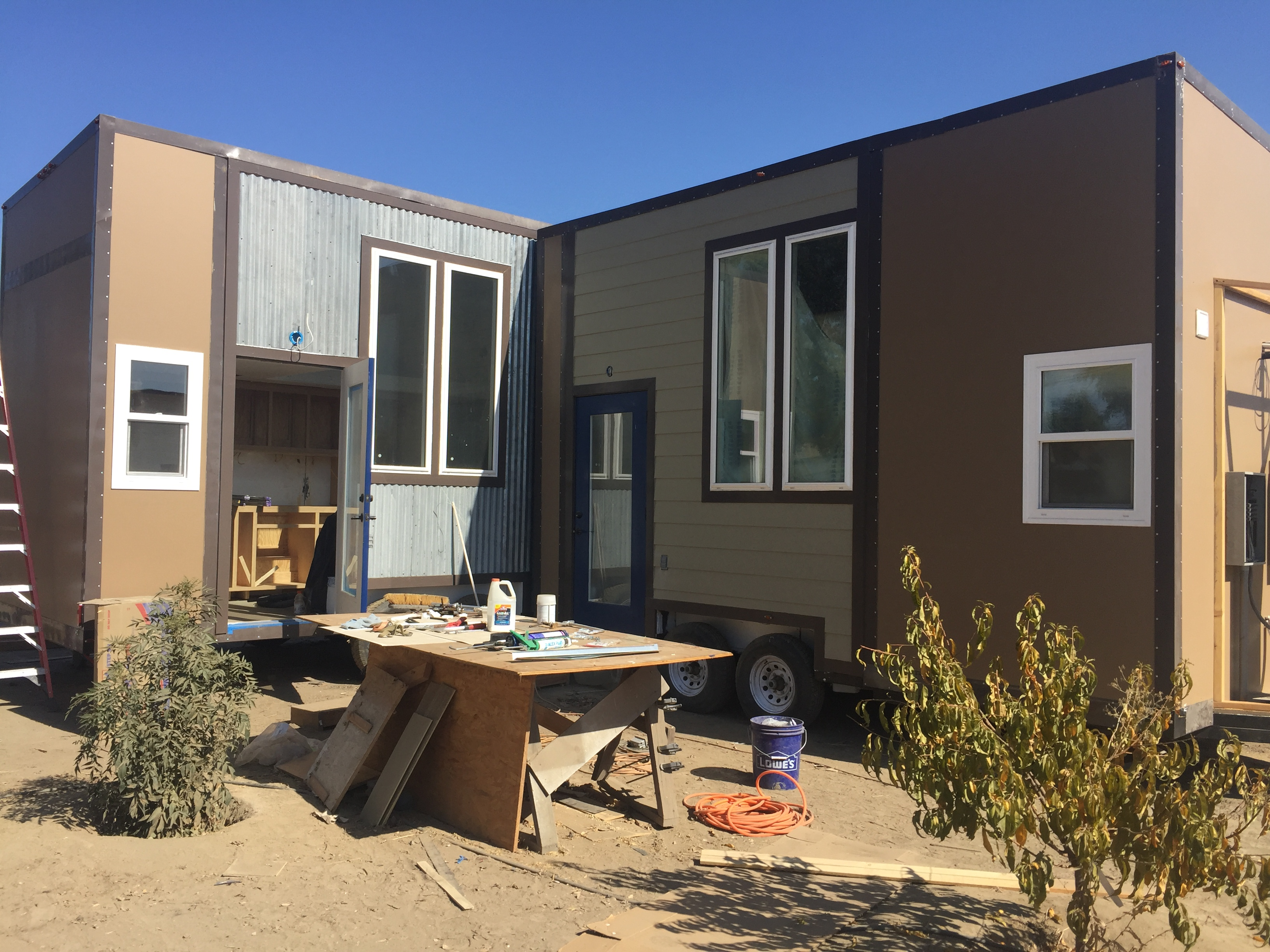 The Jonses are in the process of building a new tiny home that is actually made up of two houses – an 18-foot house and a 27-foot house that will connect so there are four lofts.

“Our family is growing and we are adapting with that,” Kathrina said.