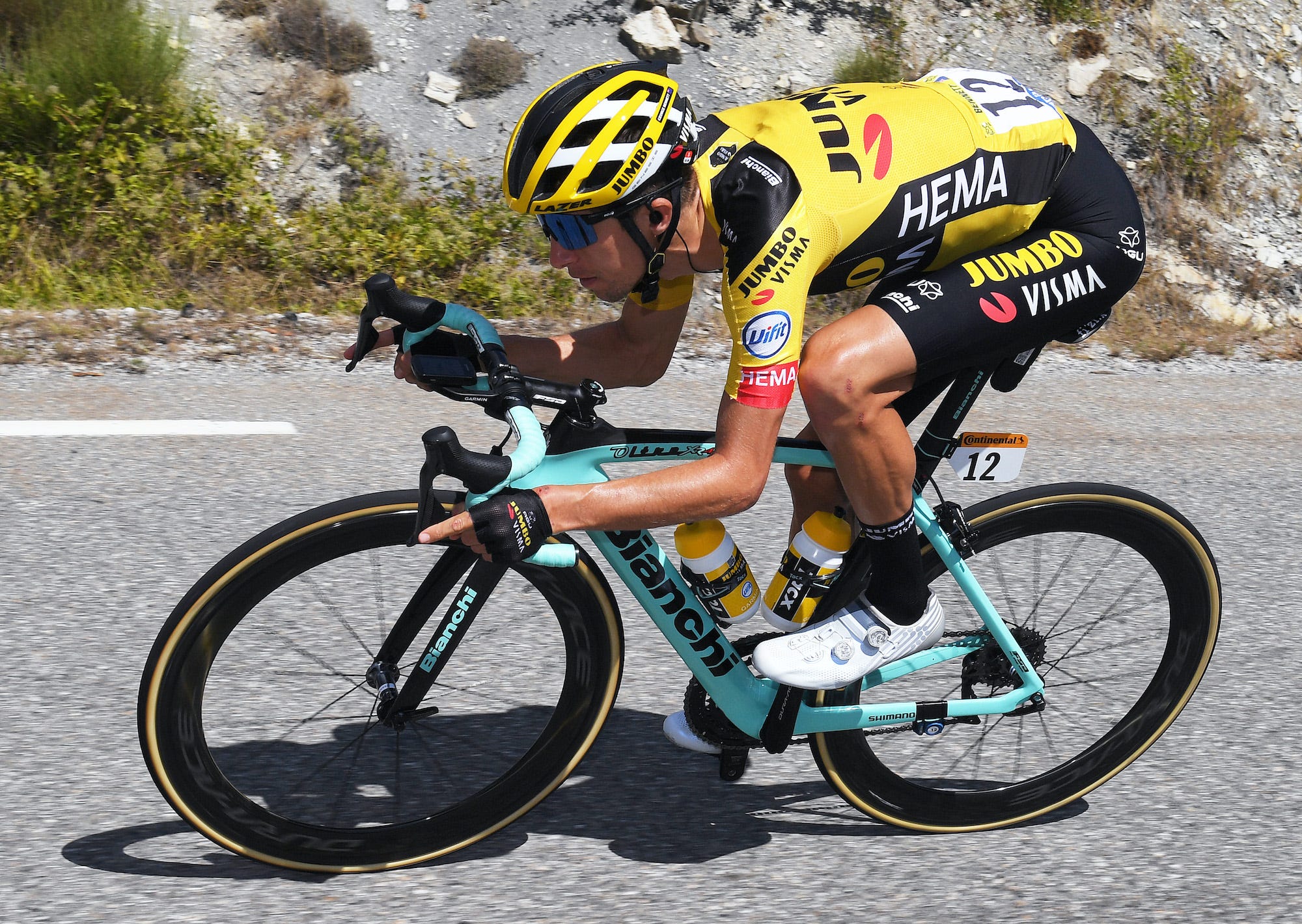 The 21-year-old Slovenian Tadej PogaÄar won a dramatic Tour de France in Paris on Sunday, beating compatriot PrimoÅ¾ RogliÄ by nearly a minute, with the Tasmanian Richie Porte in third a further 2 1/2 minutes back.

While it was one of the finest, and hardest, Tours in the race’s 107-year history â€” with a record 190,000 feet of vertical gain â€” all along the 22 teams were building, servicing, and washing hundreds of bikes to keep the riders going to Paris.

And some bikes they are.

As in the past two Tours, we checked in on who was riding what.

At this level of the sport, each rider has at least three bikes in his quiver: a superfast aero bike for the flatter stages, an ultralight climber for the mountains, and a slippery whip for the time trial. We omitted TT bikes and looked at either the aero or climbing bike, depending on which we thought more list-worthy. 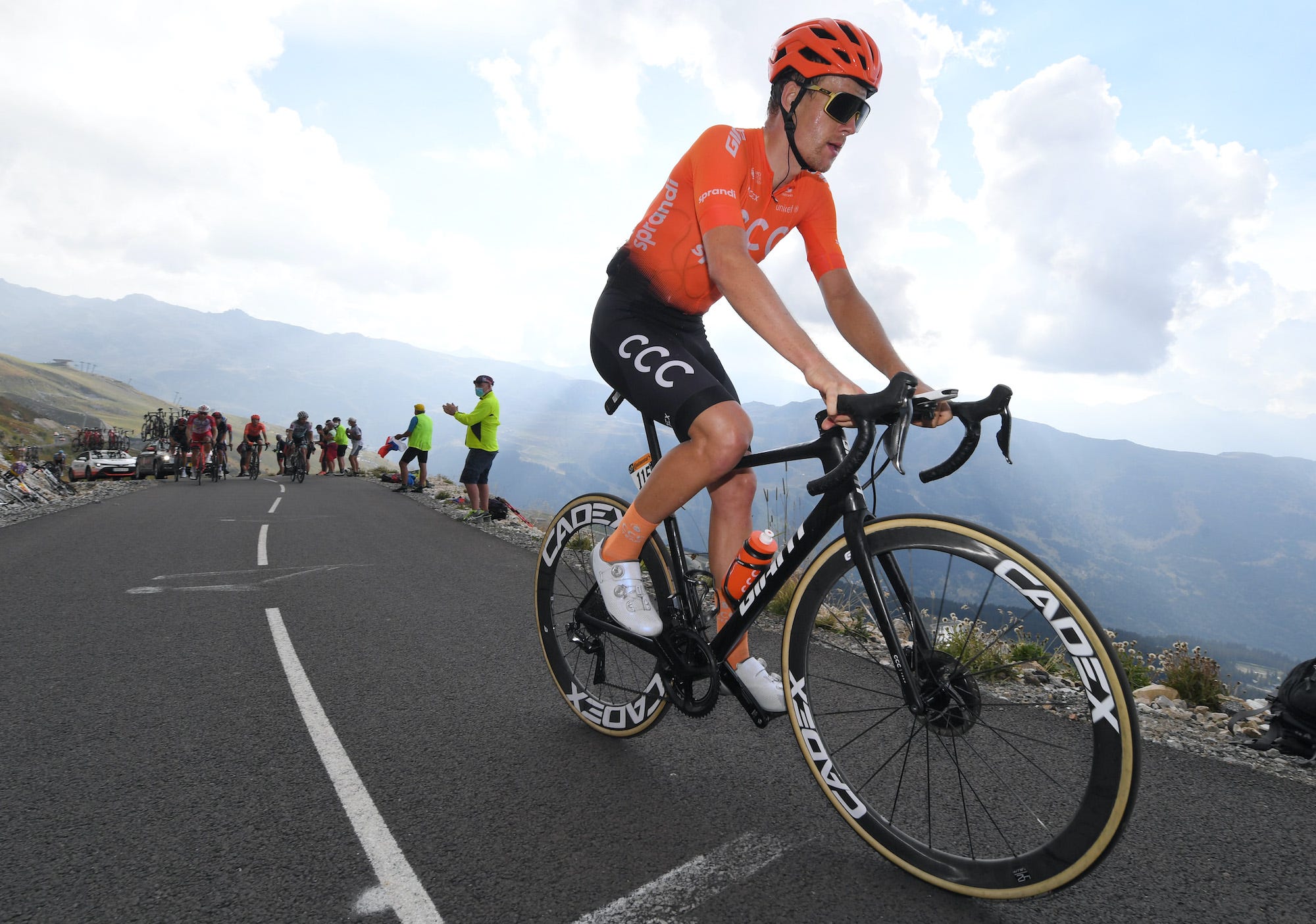 CCC’s Giant TCR Advanced SL may be a lightweight climber, but it isn’t visually stimulating. All-black bikes are a trend that started a decade ago but these days feel dated. They don’t fare well in this ranking and never have. And though we love gumwall tires, oversized wheel lettering is gaudy. At least the CCC orange pops! Dura-Ace and a Garmin Edge make this a high-end performance machine. It just needs a visual makeover. Surprisingly, the star-studded CCC squad didn’t win a single stage this Tour. 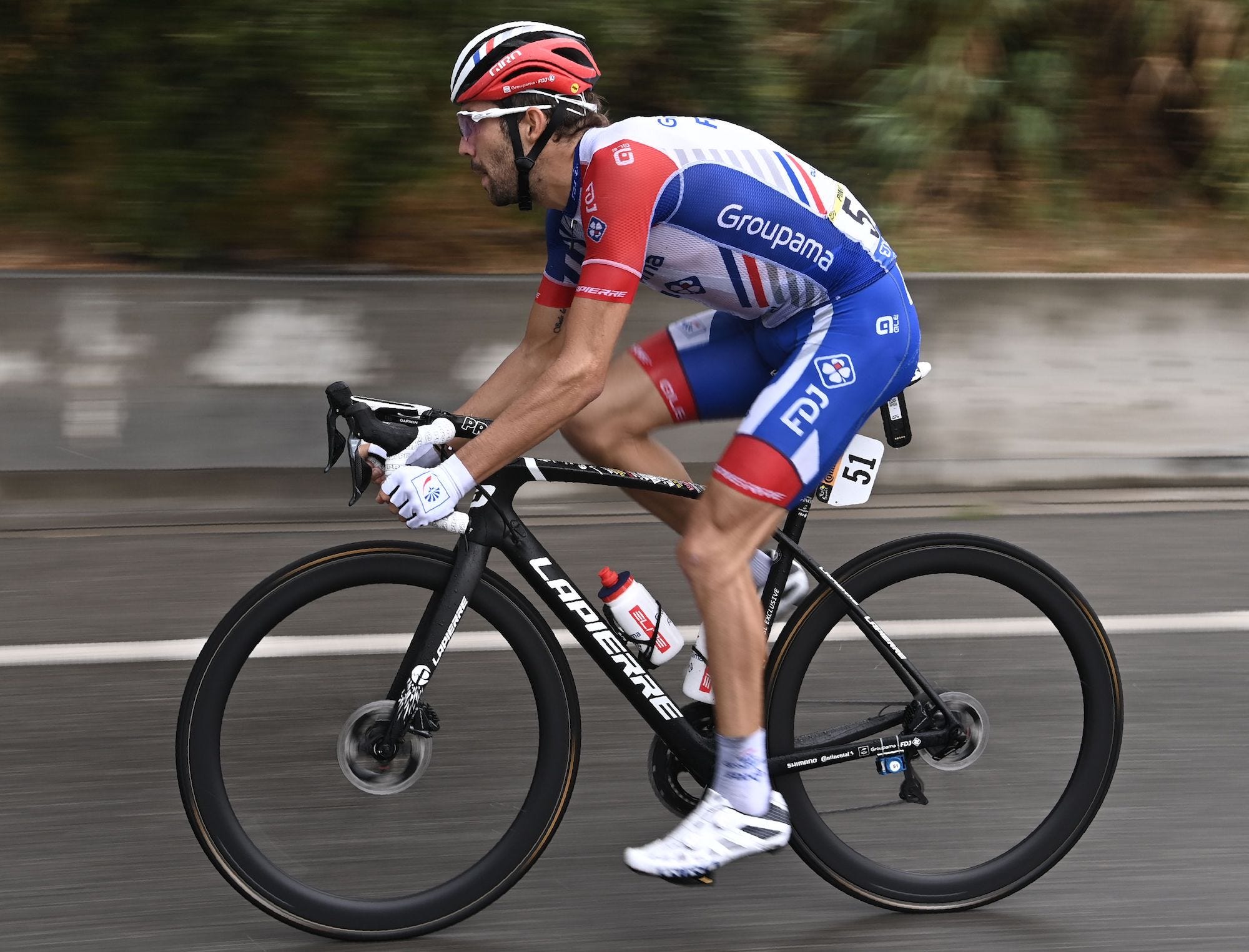 Groupama-FDJ’s Lapierre Xelius SL is a modern climbing machine with classic good looks that fails to spark the imagination. It has interesting aero shapes and a compact rear triangle for added stiffness, and you can’t go wrong with Dura-Ace Di2, disc brakes, and a Garmin Edge computer/power metre. Yet even the bike of Thibaut Pinot “Noir” could do with a little flair. Unfortunately, the team didn’t win a stage this Tour or place anyone high up in the final general classification, with Pinot having imploded midrace. 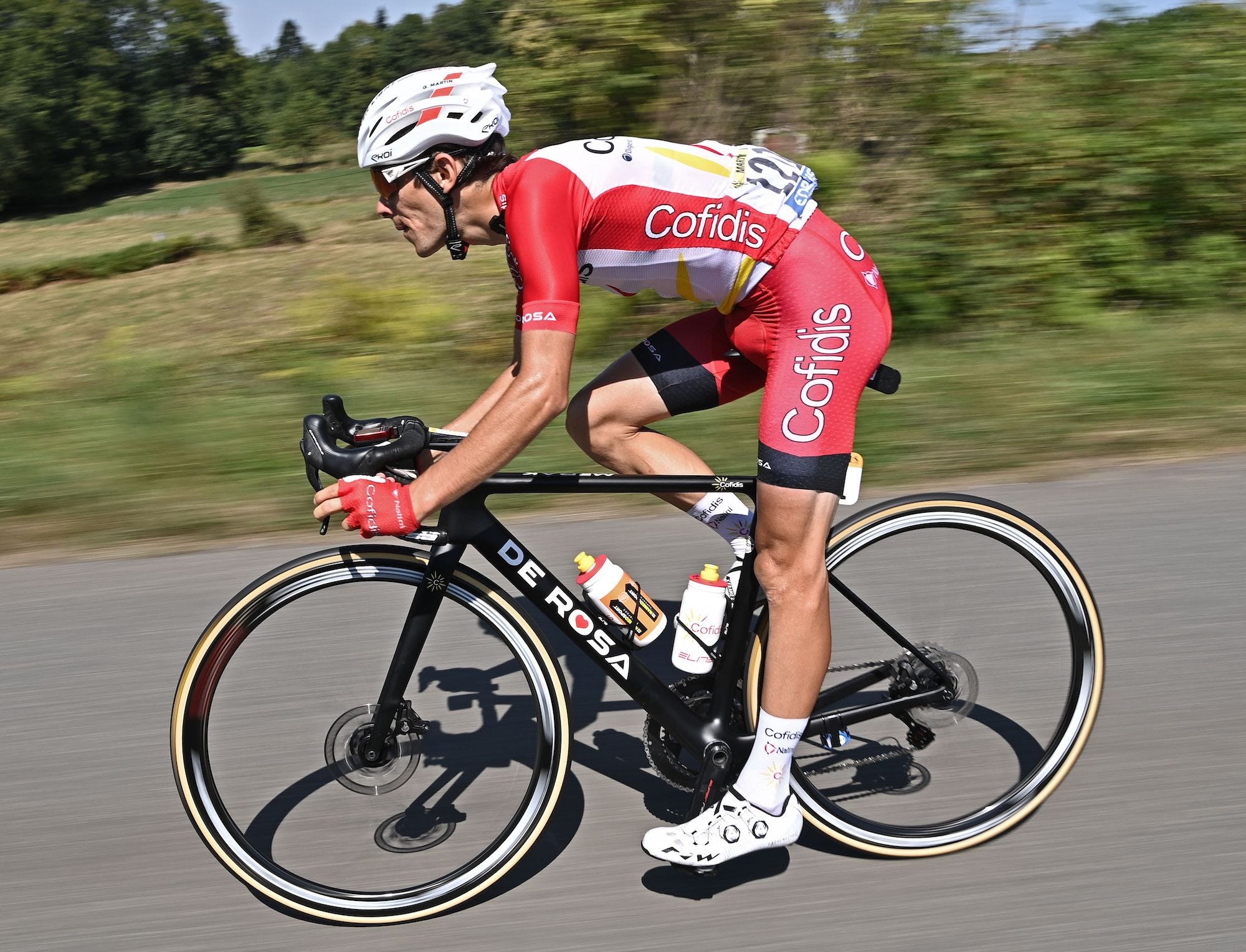 Cofidis rides De Rosa bicycles, and while we’re sure they ride wonderfully, they look like a lot of the other bikes in the bunch in nearly all-black livery. De Rosa is a classic Italian brand, so it’s only fitting the Cofidis Tour bikes roll with electronic Campagnolo components. The lightweight De Rosa Merak might please the minimalists but will leave others wanting. At least its heart is red. Cofidis riders couldn’t pull off a stage win this year, though Guillaume Martin, pictured above, did finish 11th overall. 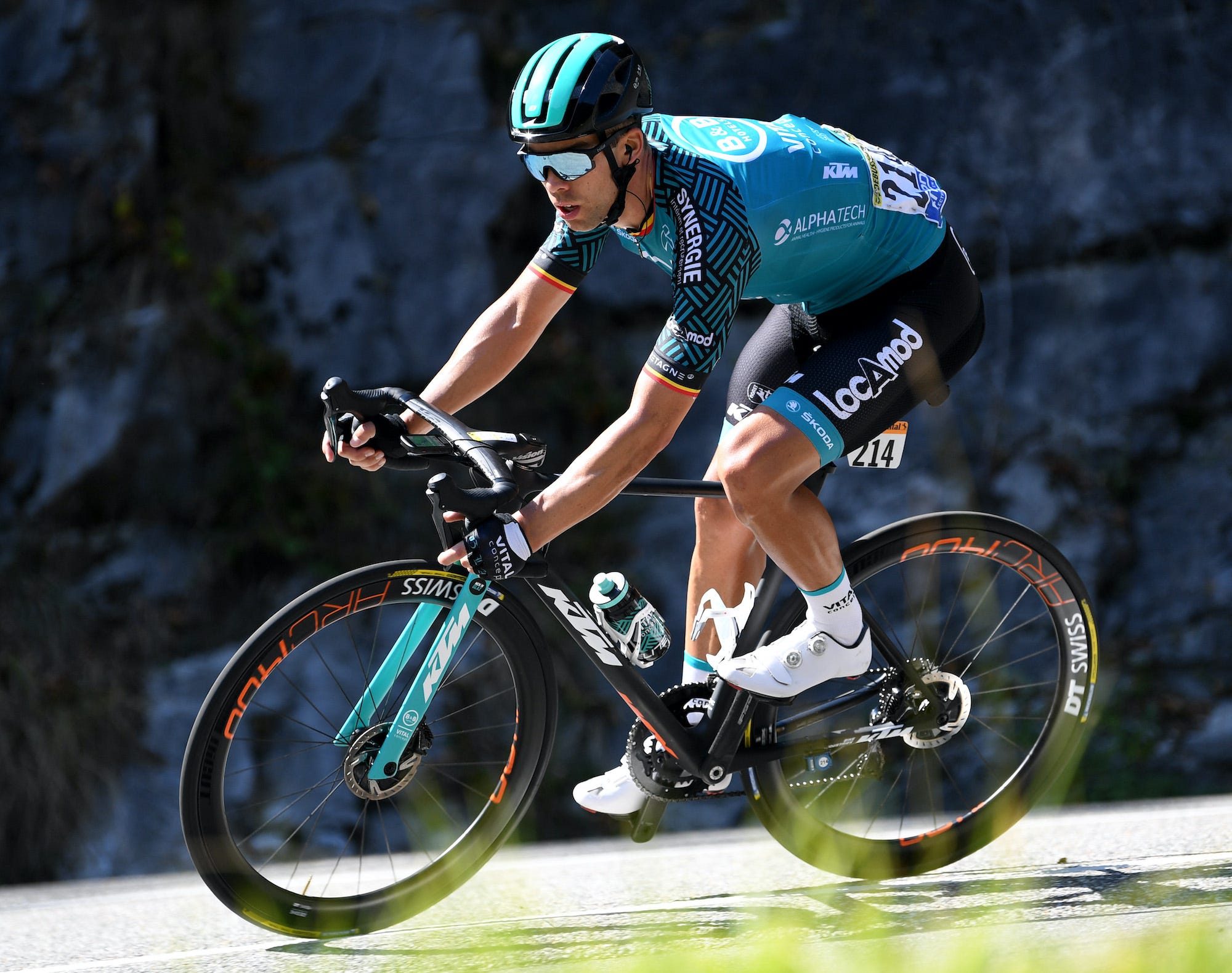 Tim de Waele/Getty ImagesKTM is a new brand on the Tour.

Team B&B Hotels’ KTM Revelator Alto, with a mix of Shimano and FSA components, features a teal fork and pops of white and orange that somehow work visually. The DT Swiss wheels complement without dominating the look. New kid on the block KTM is making its debut appearance at the Tour in style. The team didn’t win a stage but was active in several breakaways. It’s a start. 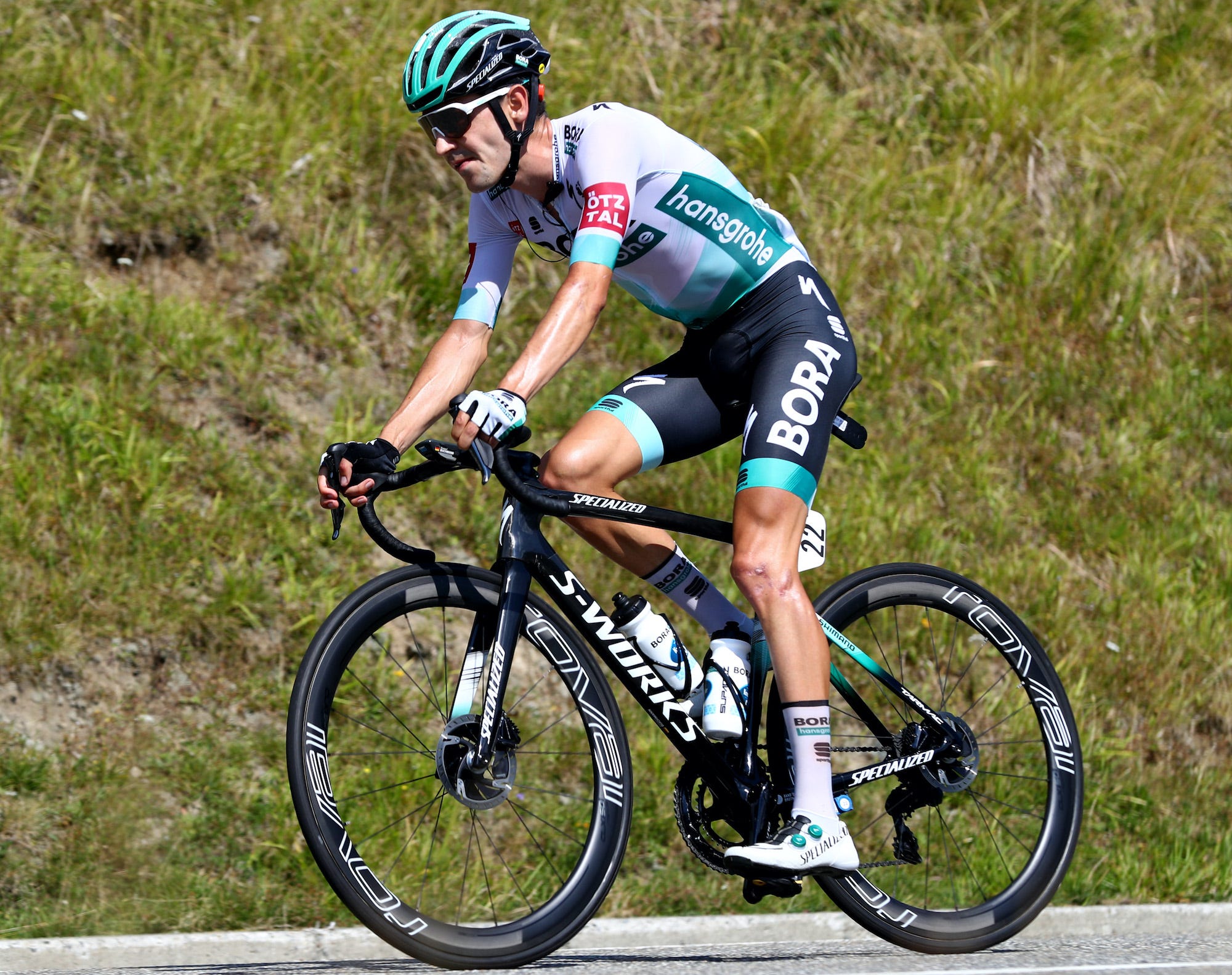 Bora-Hansgrohe’s Specialised Tarmac is probably the fastest bike at the Tour – raced by three-time world champ Peter Sagan – but looks-wise, it’s lagging a bit behind the pack. Pops of white and green add much-needed colour, but if results are all you care about, a shiny Tarmac with deep-profile hoops, disc brakes, and Di2 gets the job done. Bora’s Lennard Kämna won a stage this Tour, and Sagan was in the hunt for an eighth green jersey all the way to Paris. 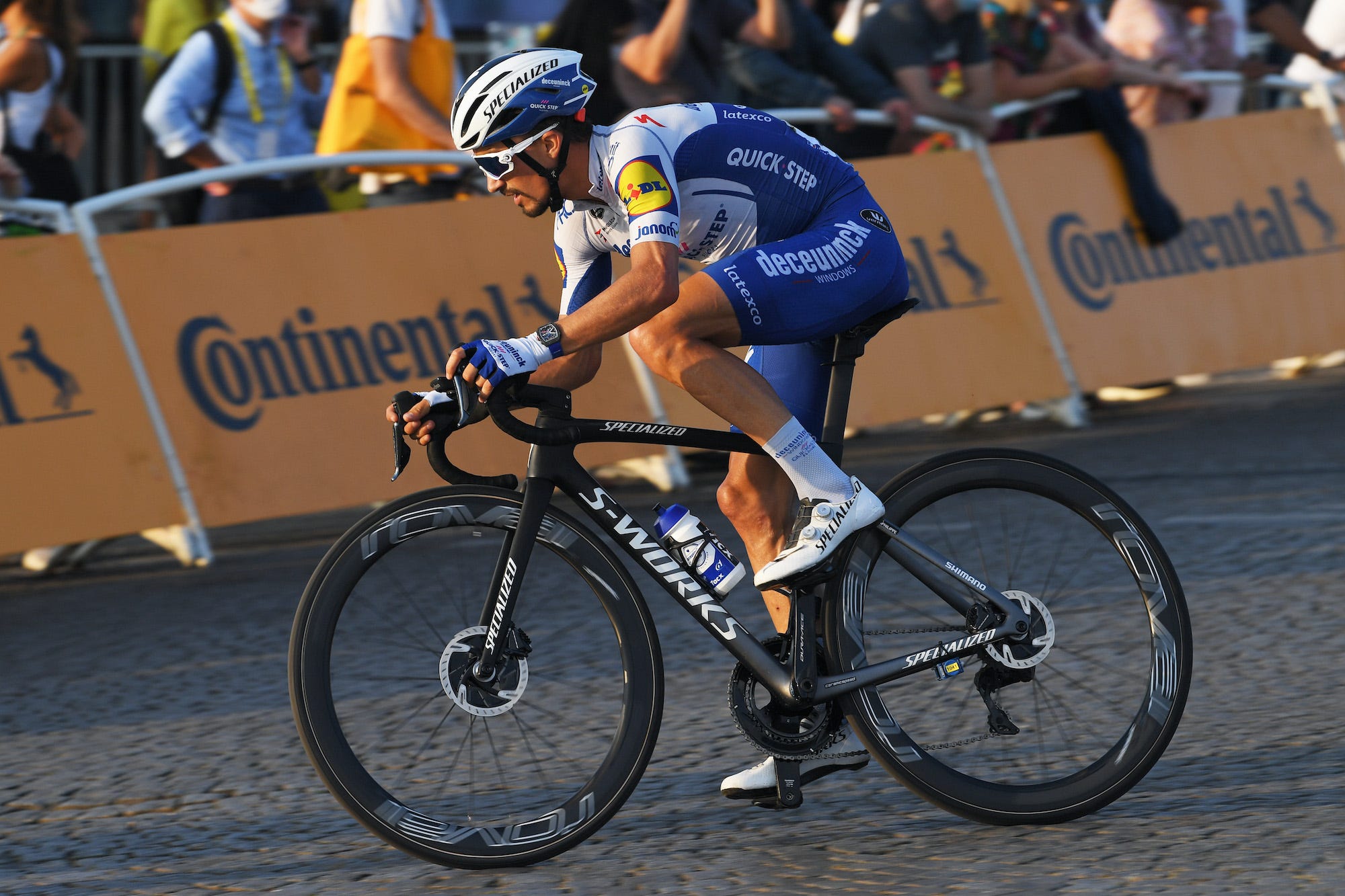 Julian Alaphilippe scored a dramatic victory on the second day of the Tour de France, giving Deceuninck-Quick Step one of its three stage wins. He did it on his Specialised Tarmac SL7, and, famously, he did it on clincher tires. The bike is obviously fast, but it’s also underwhelming-looking, so it sits lower down in this ranking. 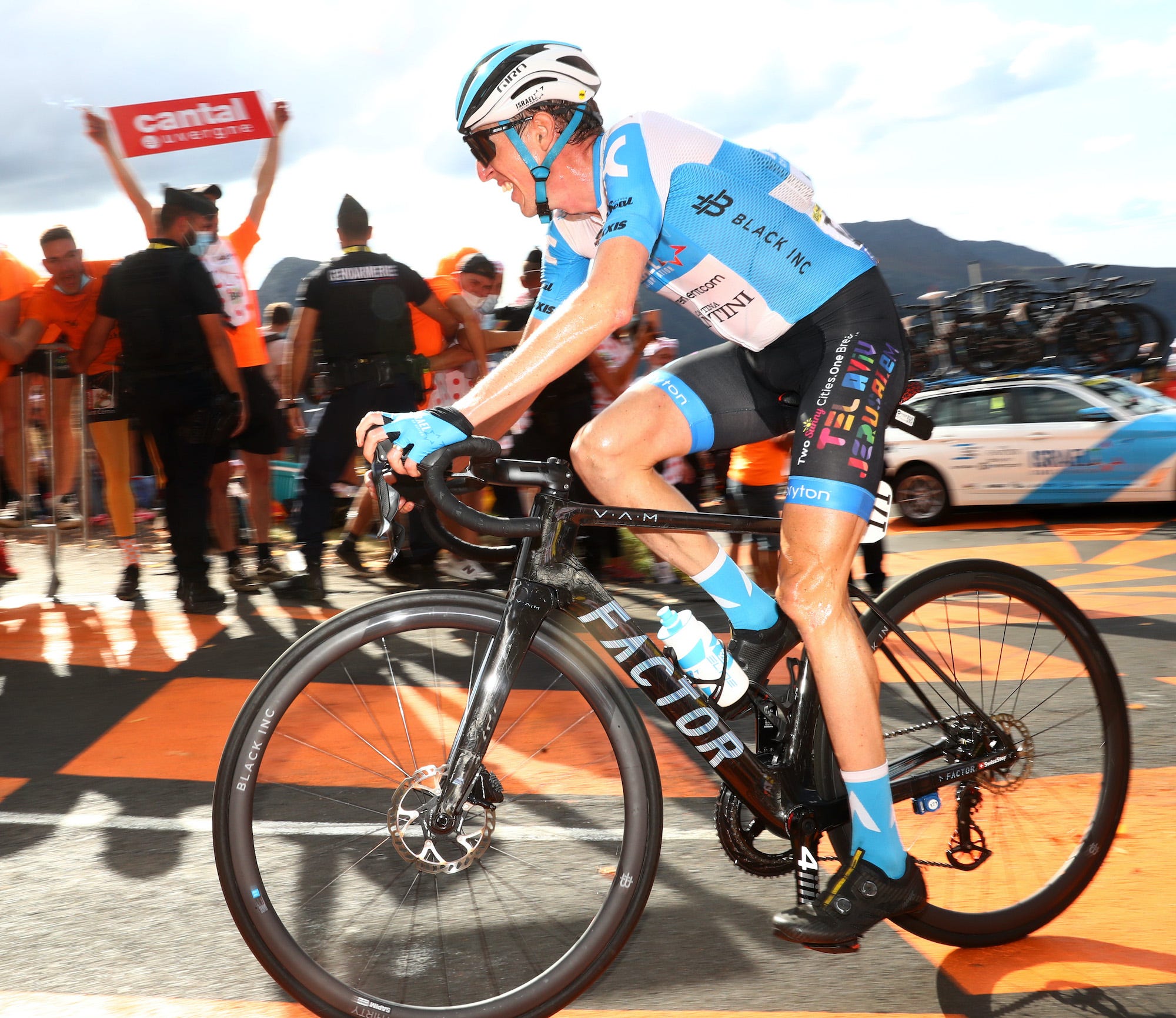 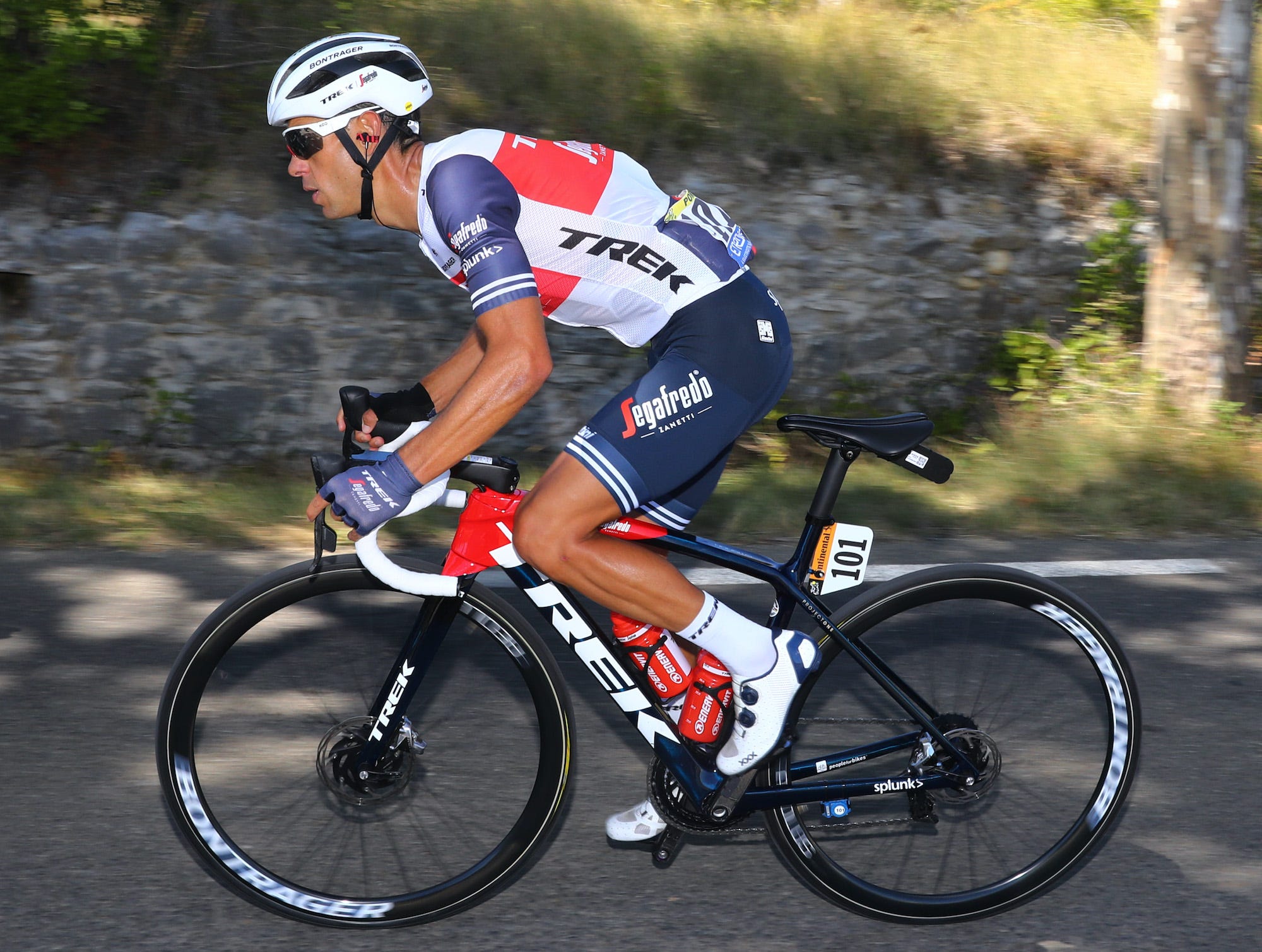 Trek-Segafredo’s Émonda SLR is one of the lightest and fastest climbing bikes in the peloton, but it doesn’t wow us aesthetically. Yet the aero climber is sleek and race-proven, and the way Tour team leader Richie Porte stormed onto the podium in Paris, it’s got legit street cred. P.S. The colour of your handlebar tape should always match the colour of your saddle. It’s just a fact. 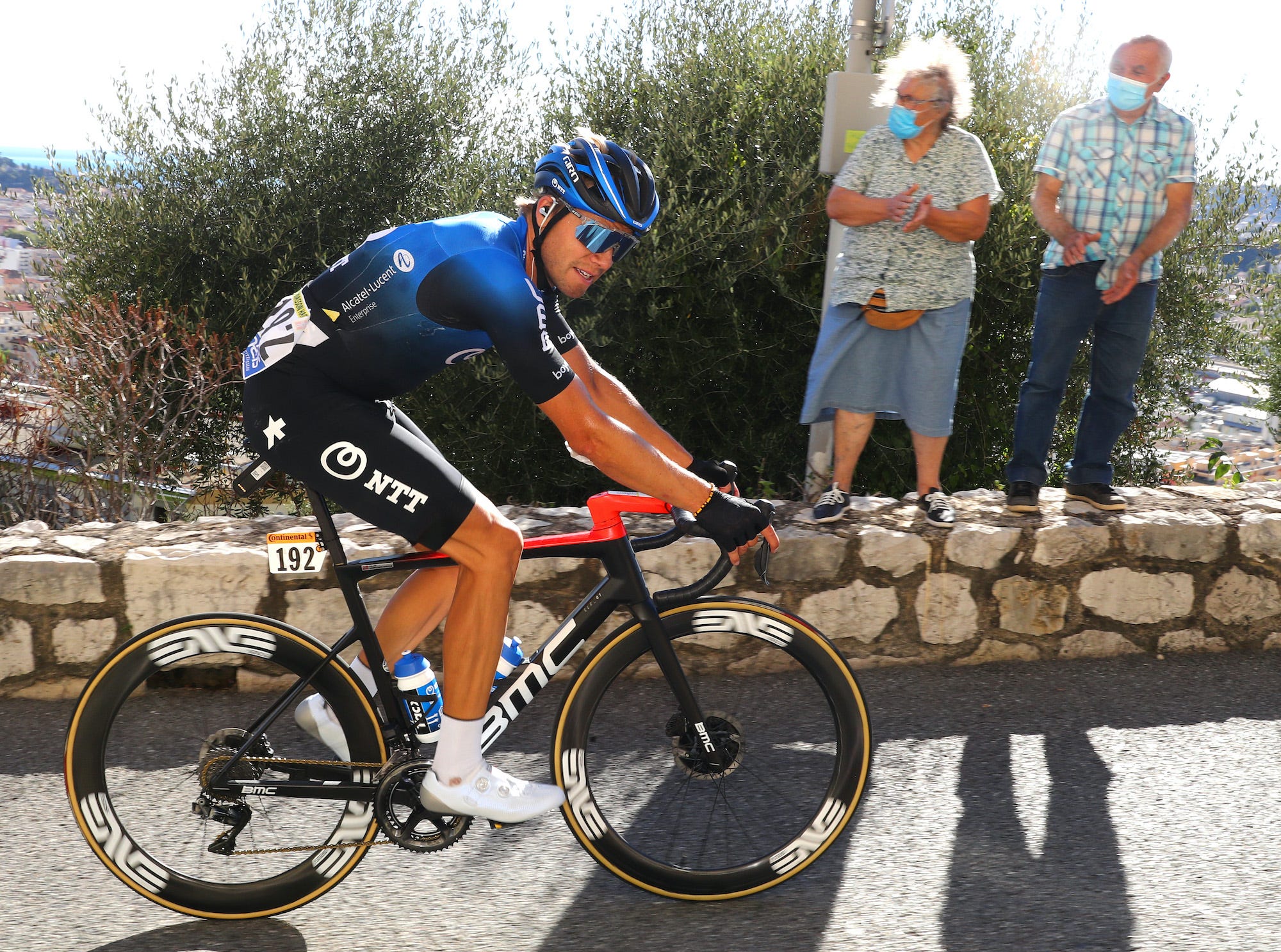 NTT’s BMC Teammachine SLR 01 goes full in on speed with its minimalist aero frameset and cockpit. Unlike many of the mostly black bikes, this one stands more with its red top and distinctive white lettering. A gold-plated chain and deep-profile ENVE wheels complement the look nicely. NTT didn’t manage to win a stage this year, with its star sprinter, Giacomo Nizzolo, quitting the race mid-way because of injury. 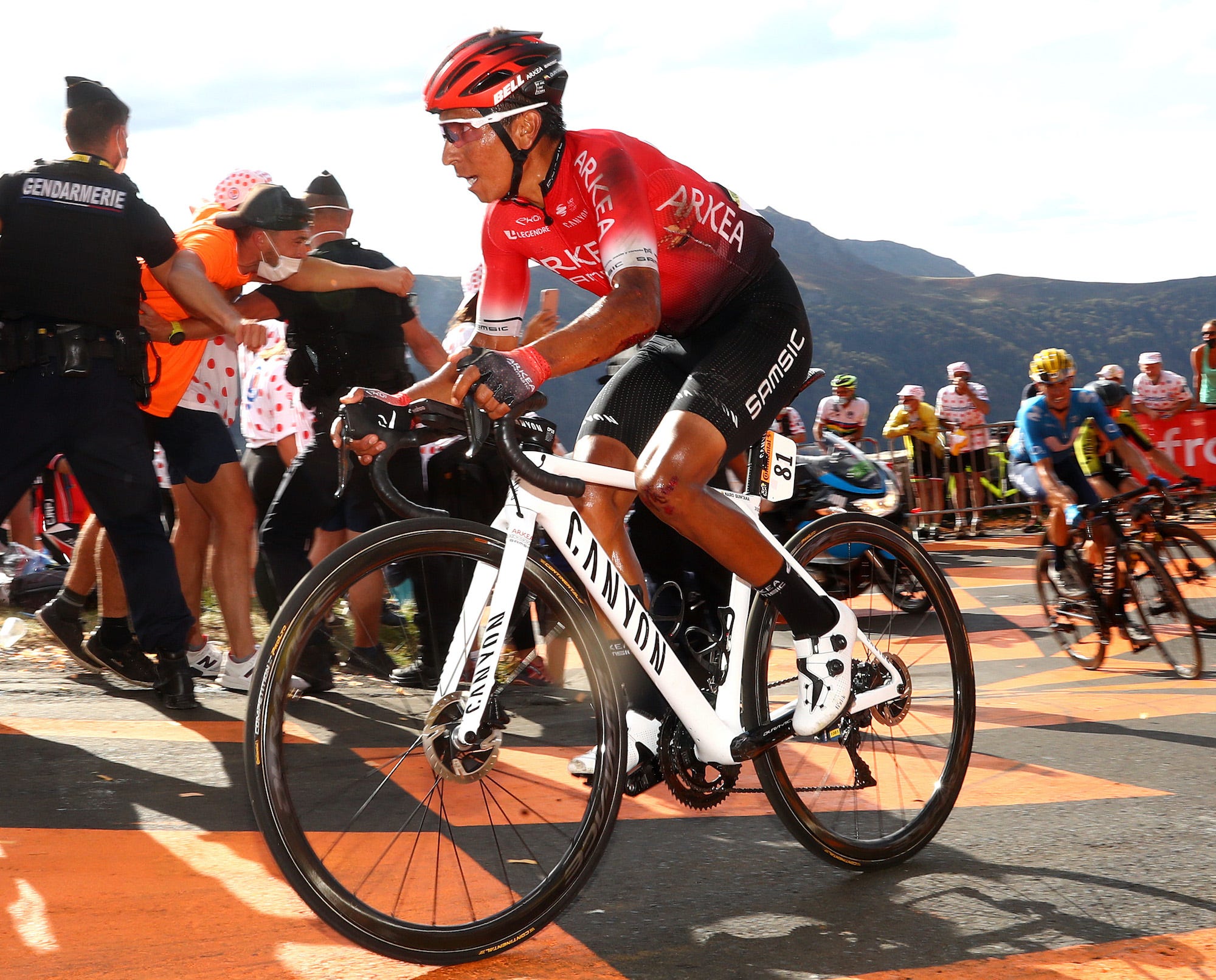 While Nairo Quintana didn’t pull out a stage win for his Arkea-Samsic team, he put in some gutsy riding and showed glimpses of his previous world-class form. His stiff, lightweight Canyon Ultimate CFR climbing bike popped as the only white frameset in the bunch, and it has a classic look with low-profile Dura-Ace wheels and components that help make it a performance powerhouse in the mountains. We also dig that Canyon type. 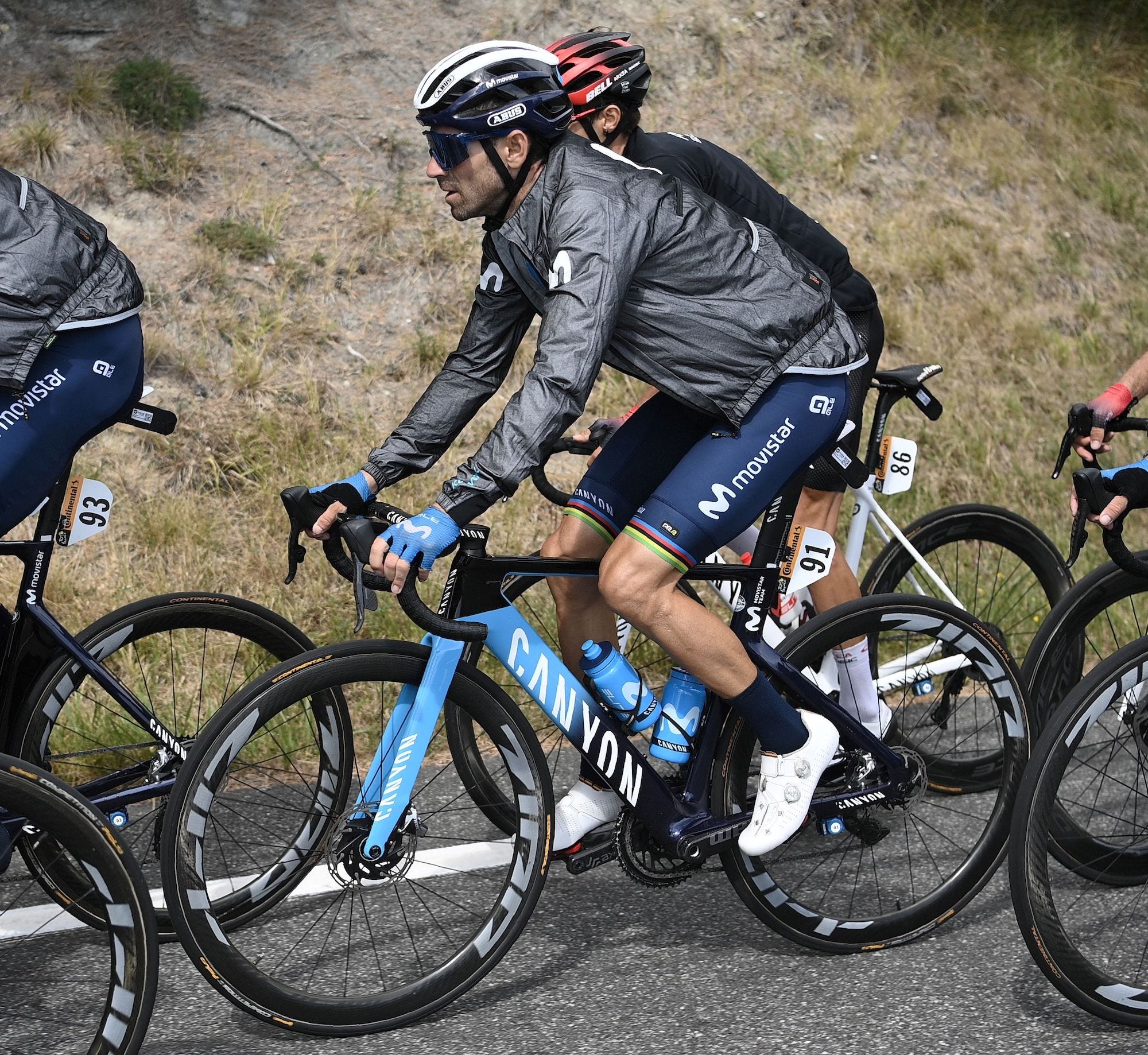 Movistar didn’t win a stage this Tour but did manage to put Enric Mas in fifth place overall in Paris and win the best team award. On the flatter stages, riders such as Alejandro Valverde, pictured above, opted for the Canyon Aeroad CF SL, a rig made for cheating the wind and going fast. We’ve always liked the blue paint job too. Movistar was one of two teams in this year’s Tour to ride Chicago-based SRAM components (the other team being Trek-Segafredo). 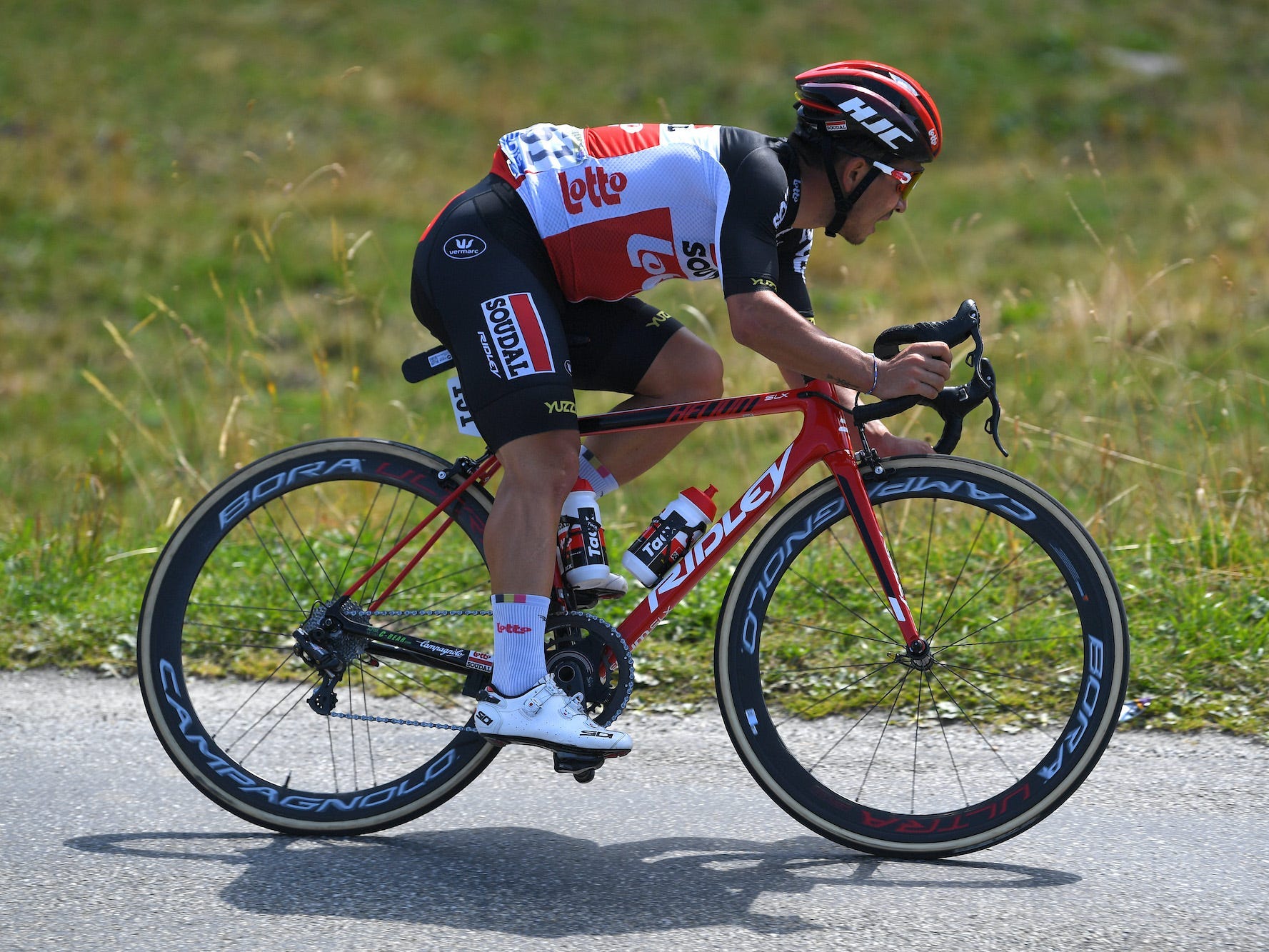 Lotto-Soudal had a successful Tour with two stage wins thanks to the rocket sprinter Caleb Ewan, pictured above. In the mountains, he opted for the Belgian brand’s lightweight climbing bike, the Ridley Helium SLX, built up with Campagnolo components and wheels. It’s a colourful bike, but a little too busy with stickers and lettering. Still, stage wins are stage wins. 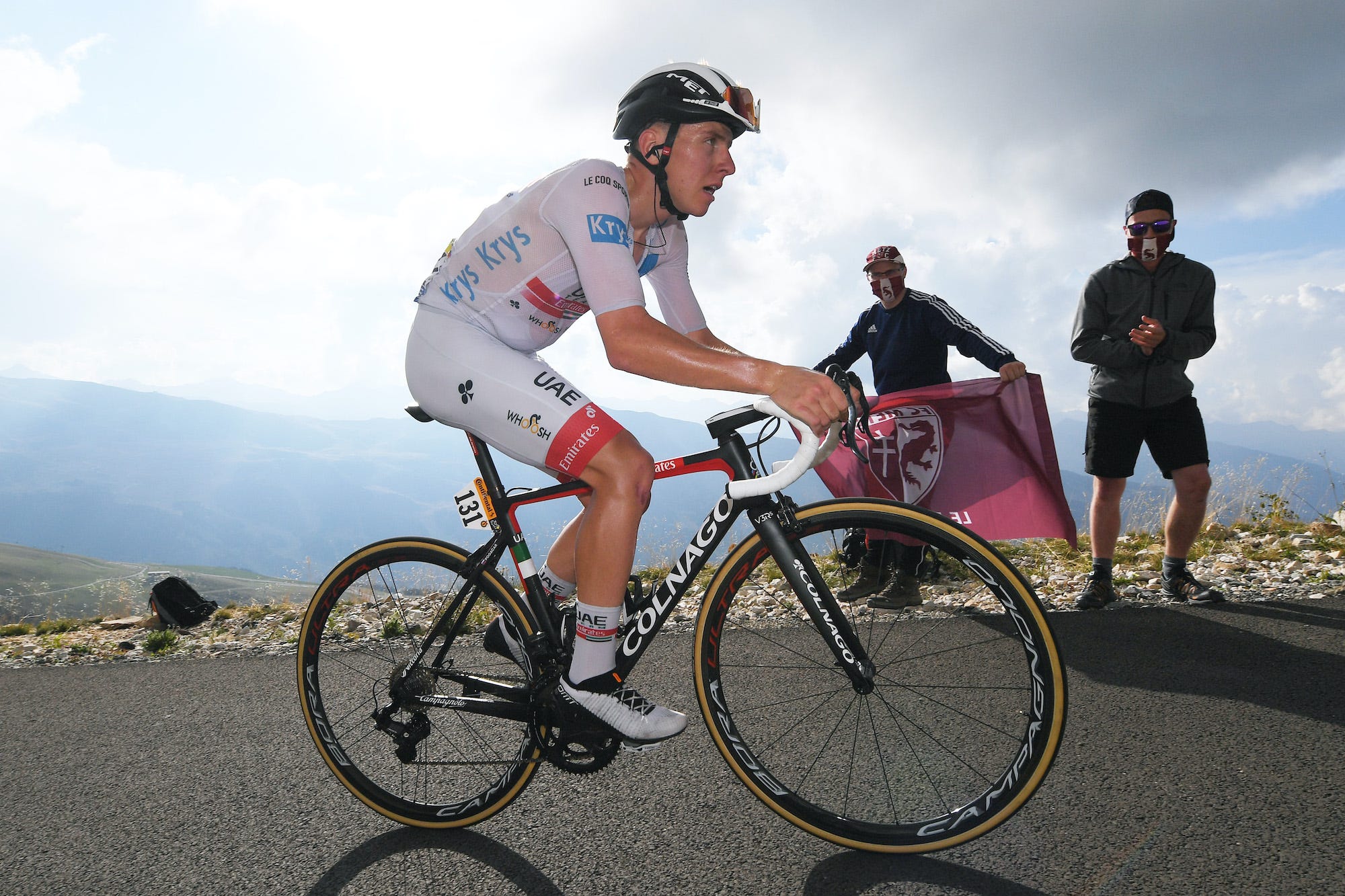 The Tour-winning bike this year, Tadej Pogačar’s Colnago V3rs, is a special ride. Colnago, the famed Italian bike maker, had never won a Tour till this year, but its history was already filled with stars and victories. The V3rs is a classic-looking lightweight racer that carried Pogačar to stunning victories in the high mountains. And clean up he did, taking the white jersey (best young rider), the polka-dot jersey (best climber), the yellow jersey (overall winner), as well as three individual stage wins. His bike’s Italian flair is complemented by a Campagnolo groupset and wheels, naturally. 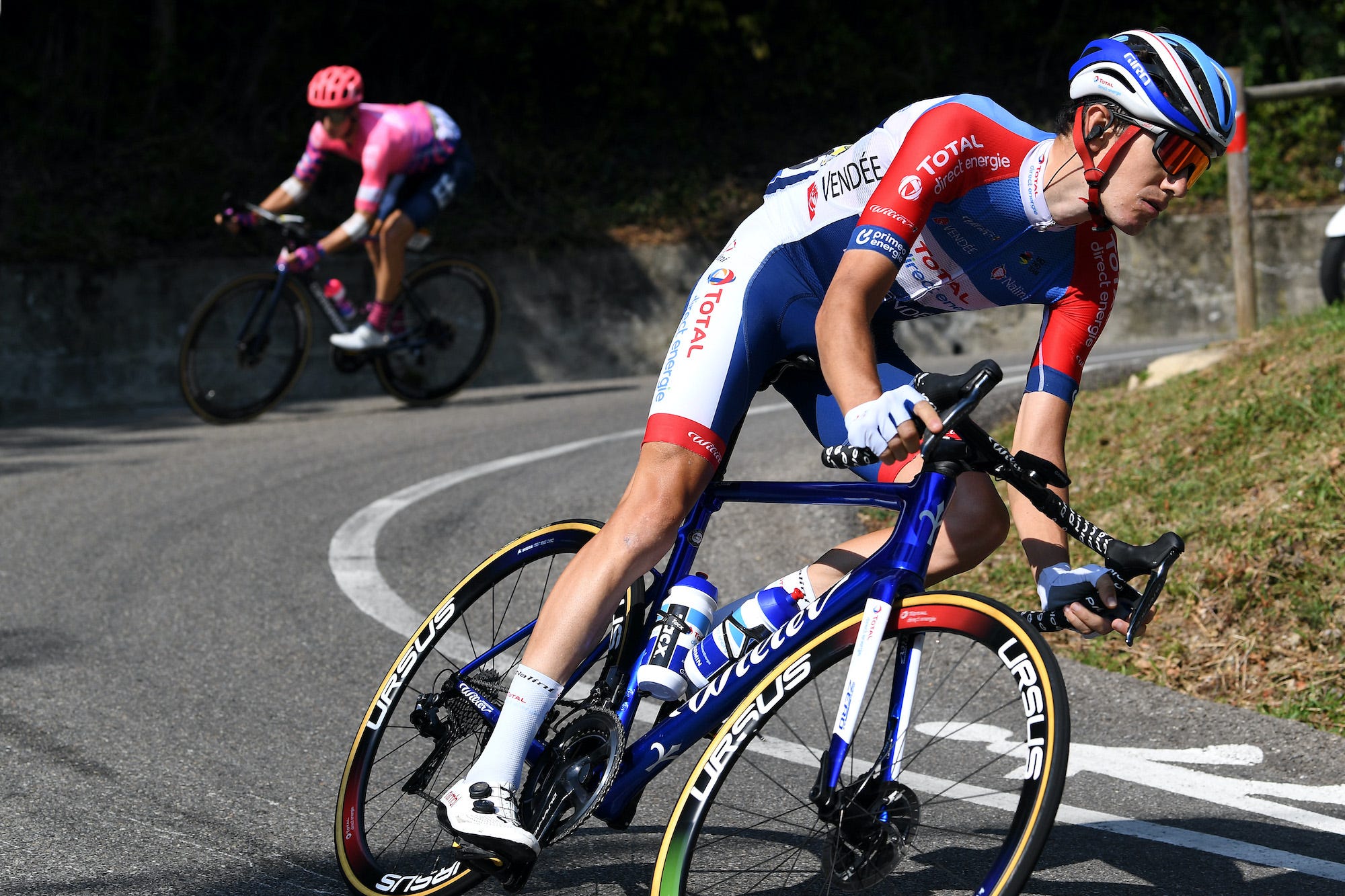 The glossy admiral blue Wilier Zero SLR ridden by Total Direct Energie was runner-up in last year’s ranking and slipped a few spots this time around. It’s a fast bike with aero features, but perhaps not everyone will dig the multicoloured Ursus wheels. The team couldn’t manage a stage win or a high finish in Paris, but it got a lot of TV time thanks to Jérôme Cousin‘s solo adventures. 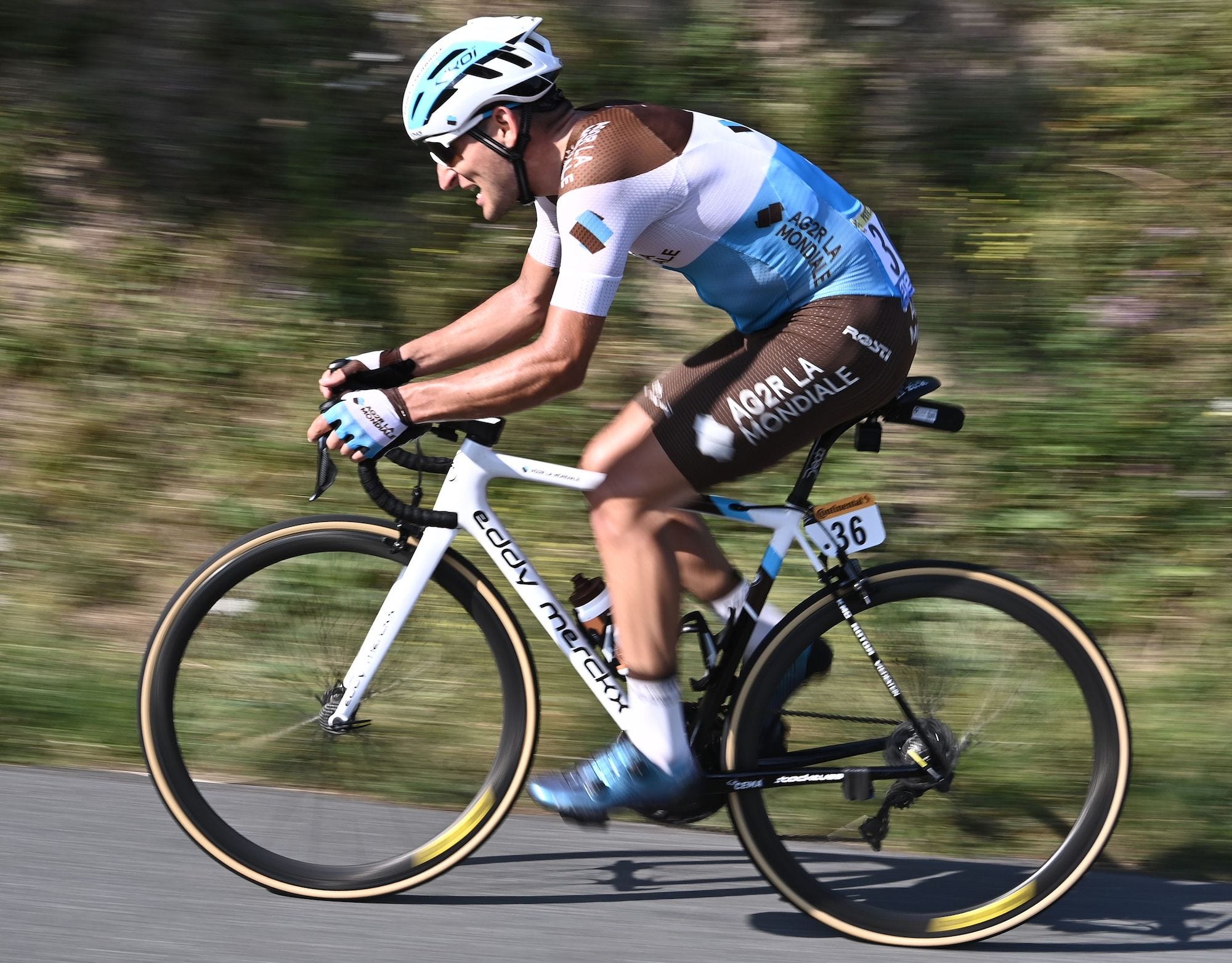 Nans Peters, pictured above, saved AG2R-La Mondiale’s Tour with a sweet solo breakaway to win stage eight. He did it aboard the understated Eddy Merckx 525, a good-looking ride with a pleasing mix of colours and handsome lettering honouring the GOAT. The lightweight carbon wheels by Mavic and gumwall tires complement the classic look, not to mention the rim brakes. 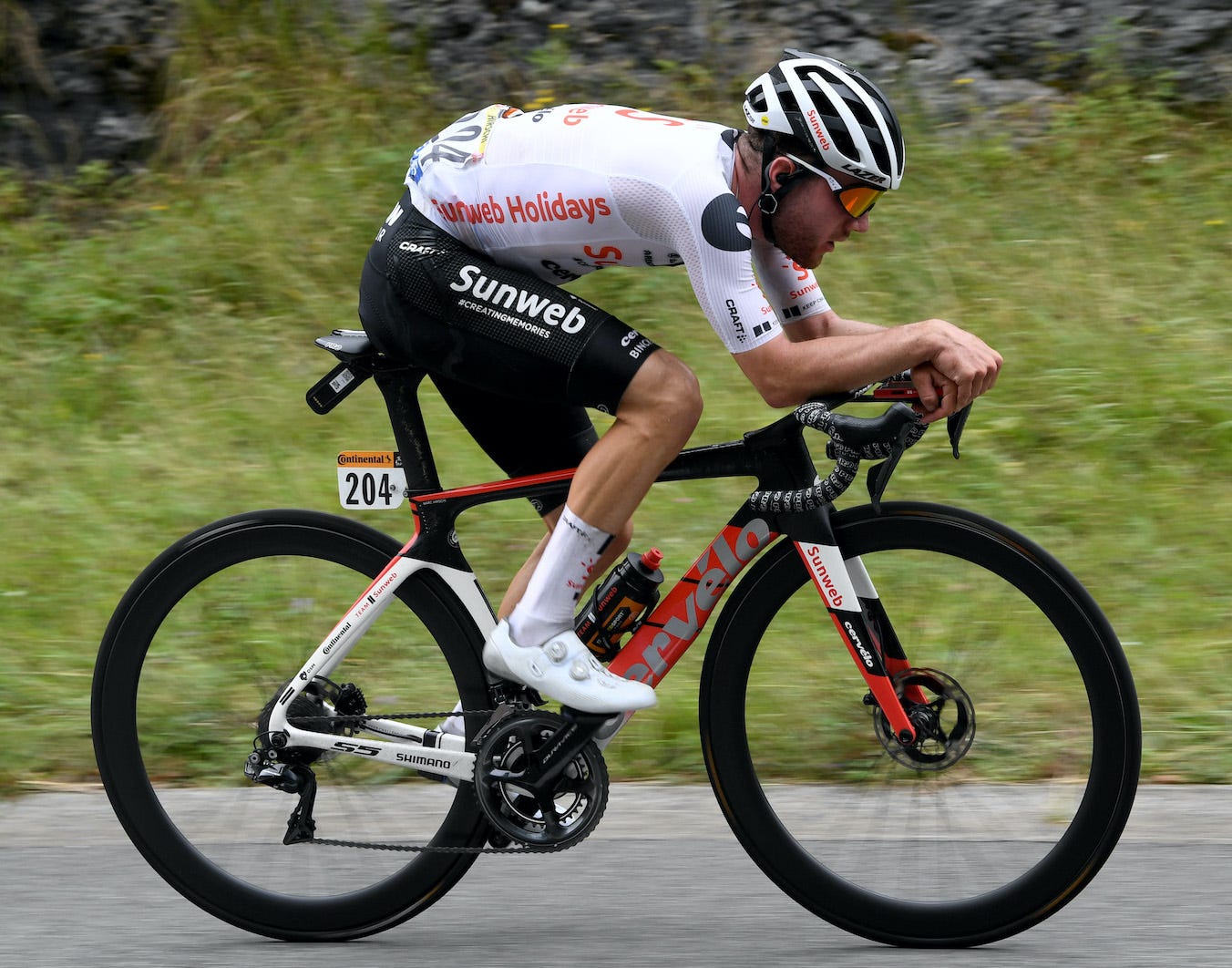 Sunweb’s Cervélo S5 is all about going fast, and it is perhaps the most aerodynamic frameset in the bunch. The multicoloured bike features deep oversize tubing, an aero cockpit and seatpost, and prominent curves around the wheels. In this Tour, Sunweb’s Søren Kragh Andersen won two stages, and Marc Hirschi, pictured above, won a stage as well as the “supercombativity” prize for the most aggressive rider. 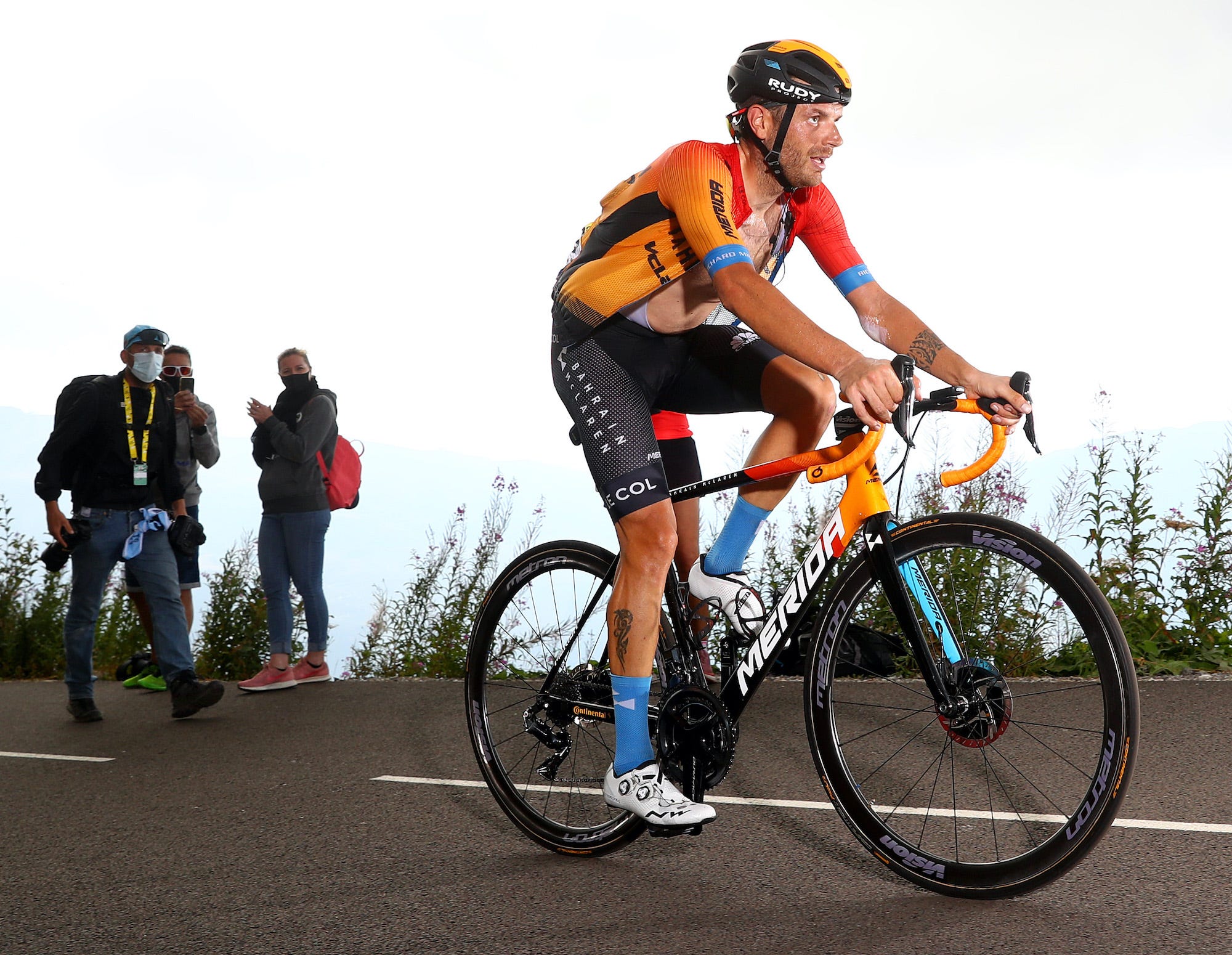 Bahrain-McLaren’s Merida Scultura is a gorgeous lightweight climber that pops with vibrant oranges, reds, and blues. The Scultura has a classic-looking design we like but is also very aerodynamic with smooth rounded tubes. Dura-Ace and Vision wheels complete the package. The team didn’t win a stage this Tour, but Mikel Landa finished fourth overall, and Damiano Caruso, pictured above, finished 10th.

Jumbo-Visma’s Bianchi Oltre XR4 won our ranking last year and slipped to fifth this time around. The famed Italian bike maker’s celeste frames pop in a sea of black bikes, and there’s no shortage of performance features, with its aggressive, deep aero tubes and Dura-Ace carbon wheels. Jumbo-Visma lost the Tour on the penultimate stage but walked away with three stage wins and runner-up on the general classification with Roglič. 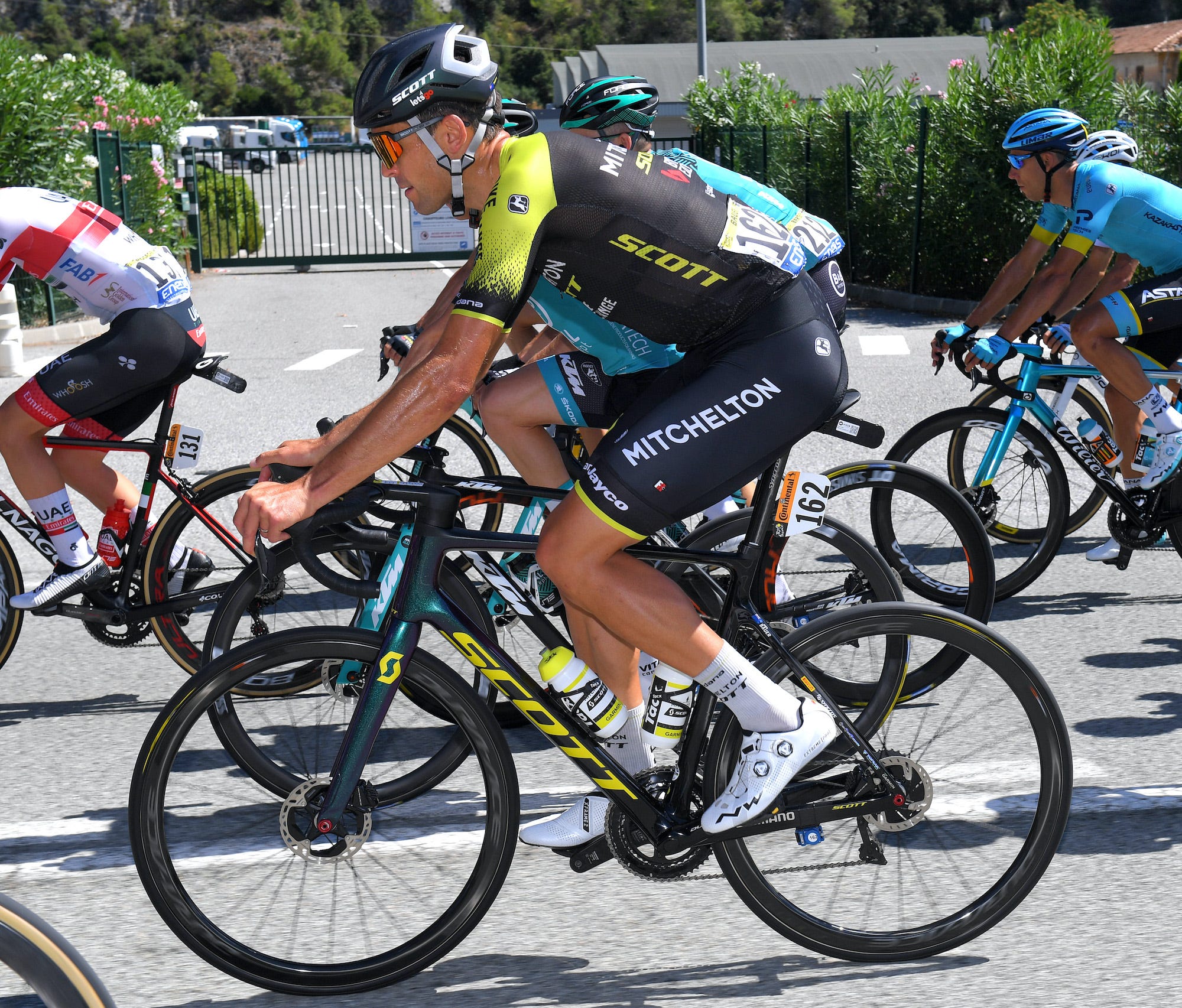 Team Mitchelton-Scott rides one the most visually interesting bikes in the peloton: the Scott Addict. Its sparkling paint appears to change colour in bright sunlight, making it stand out brilliantly in a field of matte-black frames. It’s also one of most aero bikes, with slippery tubing, fully integrated cables, minimalist cockpit, and Dura-Ace wheels. The squad didn’t win a stage this year, but Adam Yates did lead the race for a few stages. 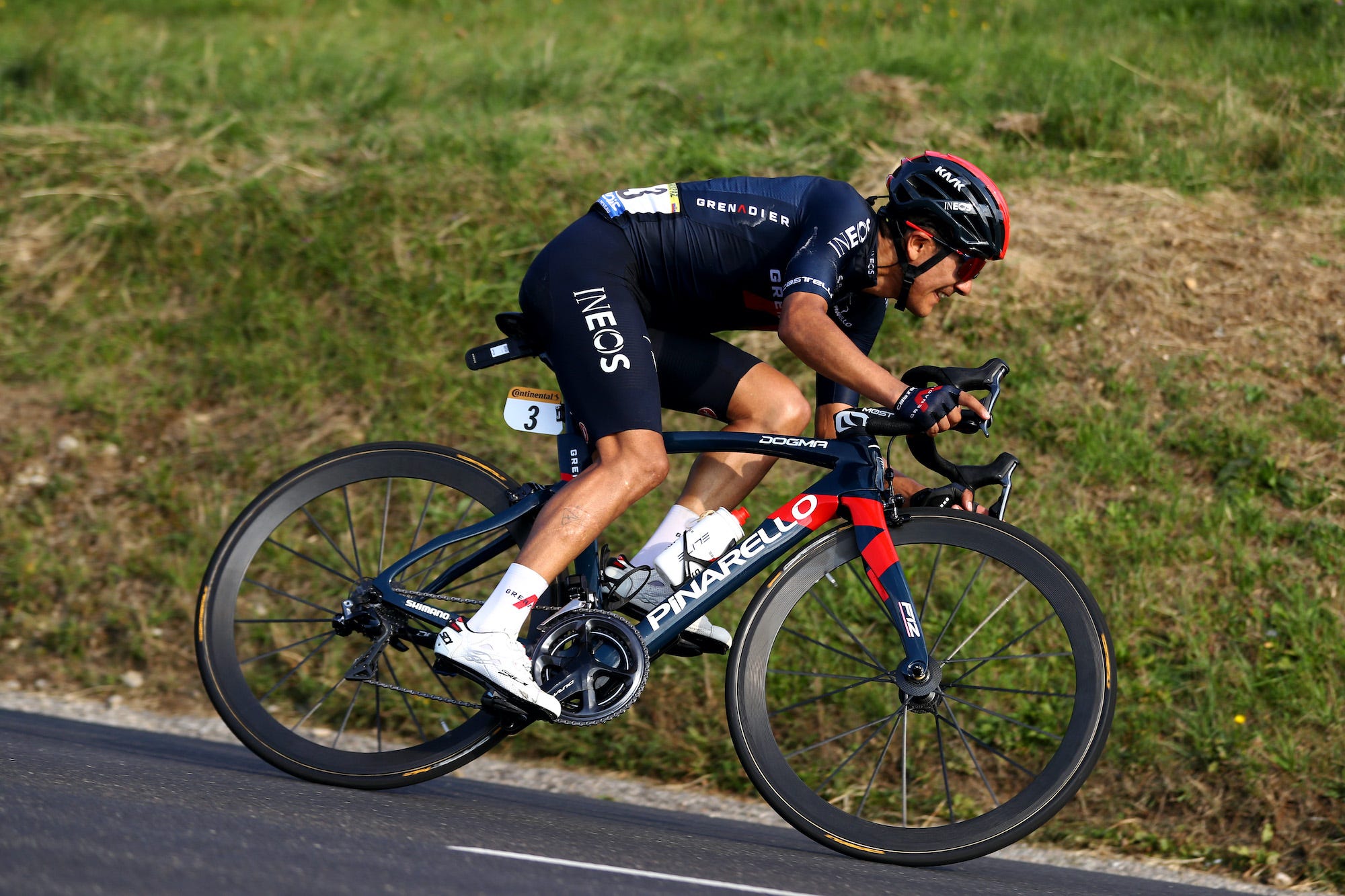 In one of our previous rankings, Team Sky’s all-matte-black Pinarello Dogma came in dead last, oozing dullness. But the crew now known as Ineos-Grenadiers is on our podium with a new-look Dogma F12 in blue, red, and white. Its curvy aero tube shapes have always helped it stand out, and with its updated smart looks, the multiple-Tour-winning bike has never been better.

The already fast bike benefits from an electronic Dura-Ace groupset and what appear to be not-sponsor-correct Lightweight wheels. The top team managed only one stage win this year, thanks to Michał Kwiatkowski, and it failed to defend itself overall after the implosion of Egan Bernal and his early exit. 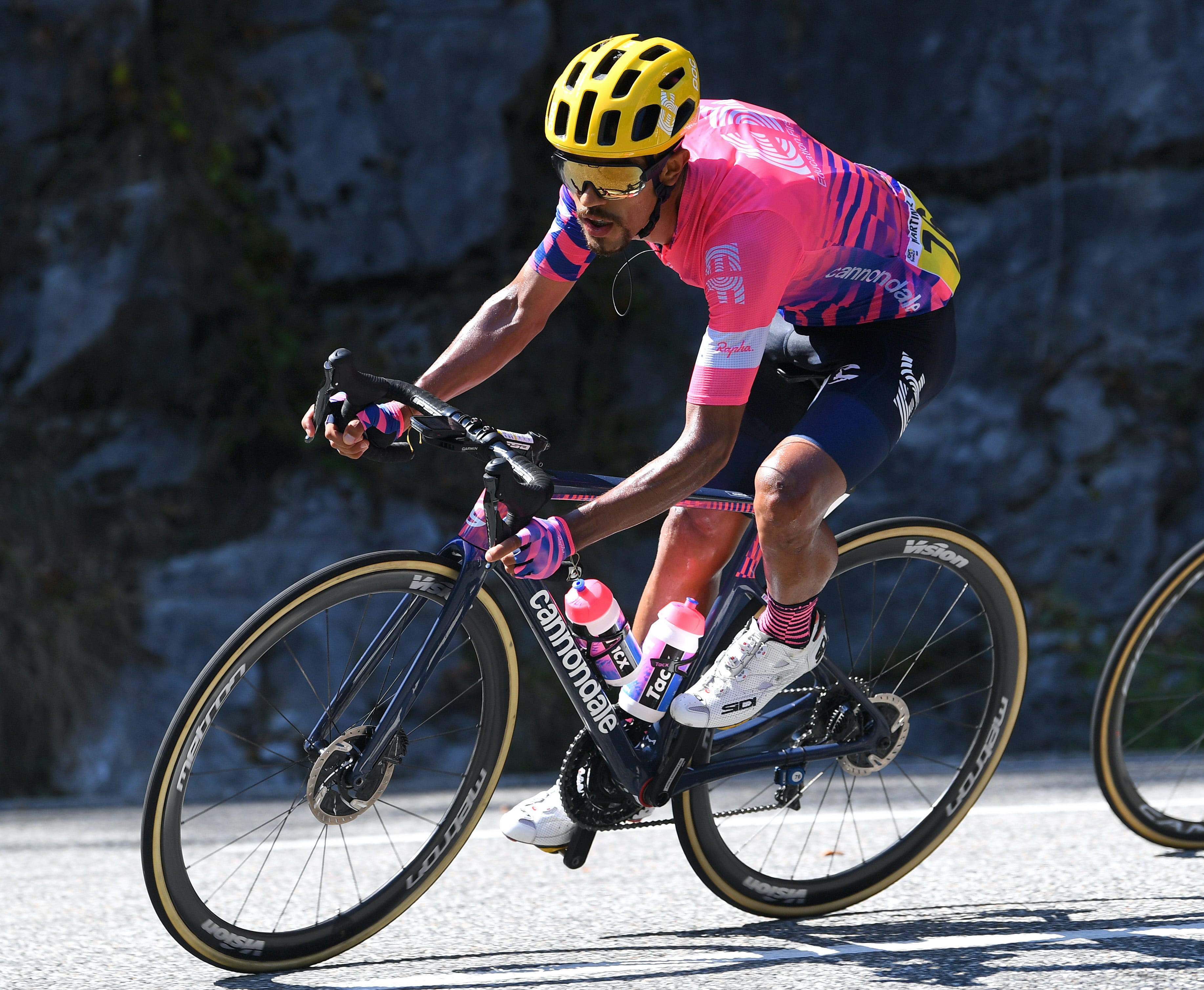 You can’t miss EF’s pink jerseys, and yet its Cannondale SuperSix EVOs are lookers, too, with their handsome blue-pink aero framesets. We’ve spent a lot of time riding the EVO, a light, fast, and fun all-around bike that gets better with each iteration. Cannondale says this EVO is the fastest lightweight bike it’s ever made, saving 30 watts at 30 mph. It certainly worked well this Tour for stage winner Dani Martínez and eighth-place overall finisher Rigoberto Urán. Vision wheels, electronic Dura-Ace, and a Garmin Edge computer/power metre complete the build. 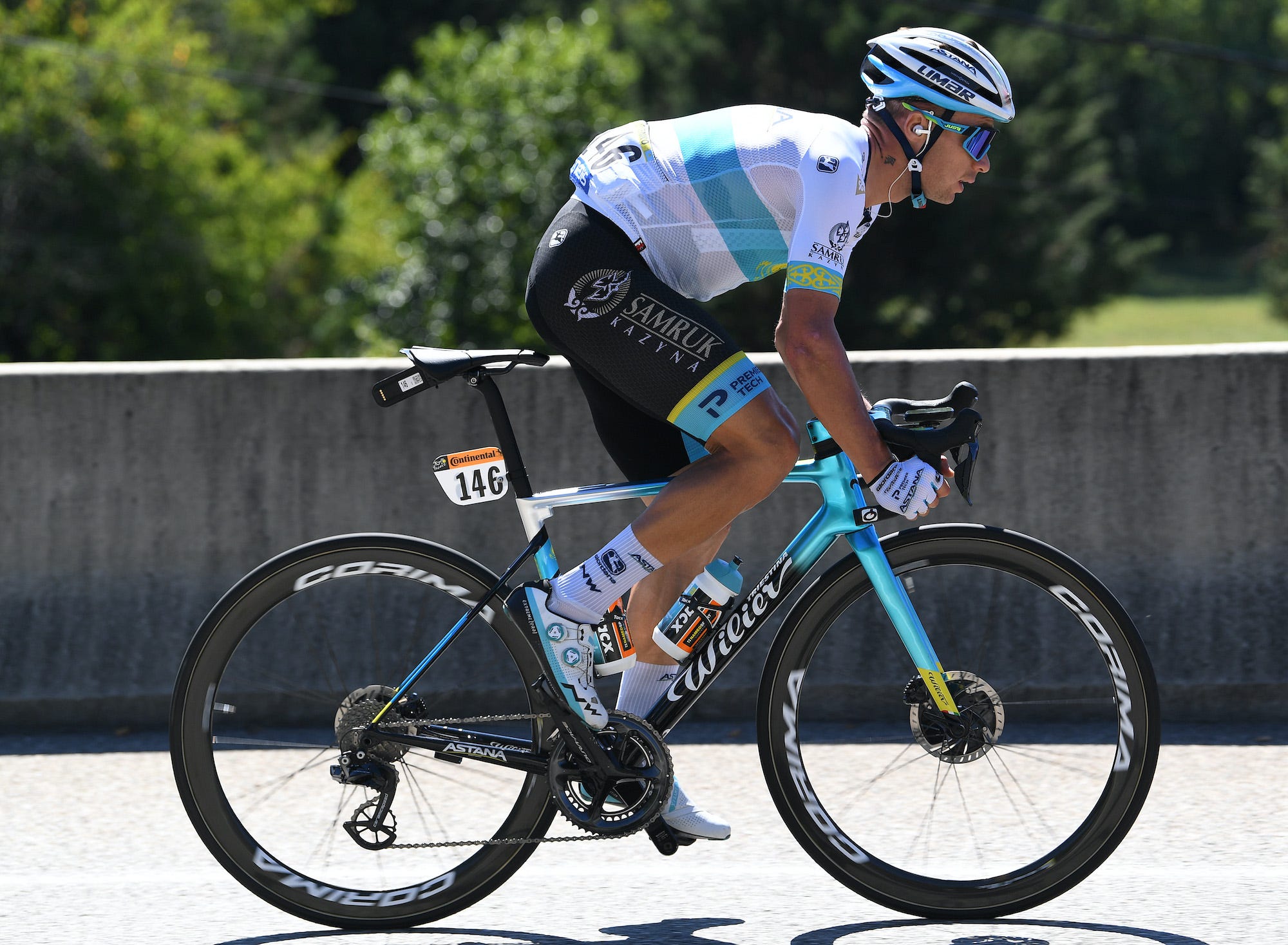