A man has chosen to live full-time in his truck for 2 years, giving new meaning to tiny-house living — see how he does it 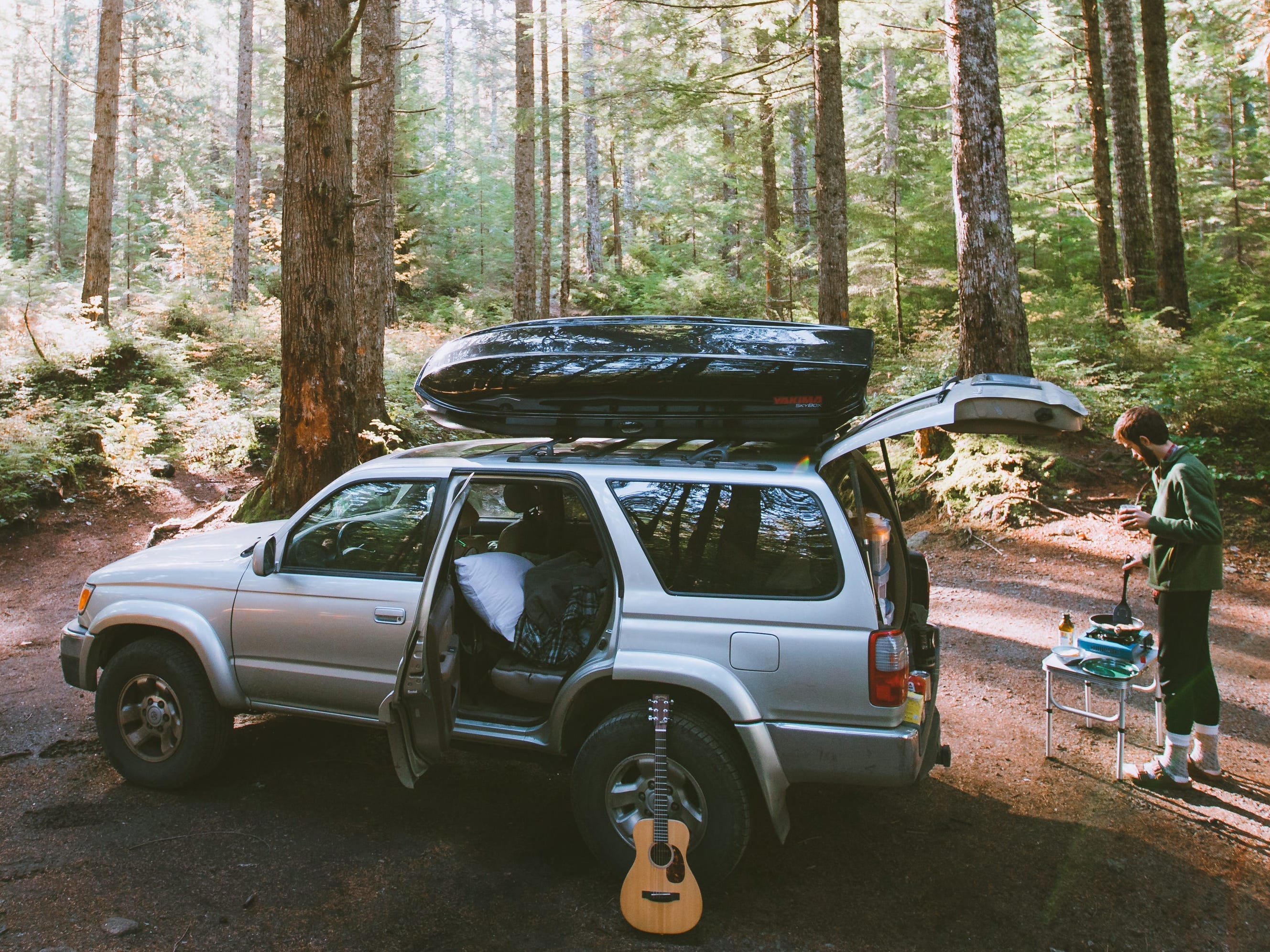 If home is where the heart is, then Nathaniel Wise is right at home on the open road.

Wise is a photographer who has been living in his Toyota Sequoia truck full-time since 2018 after he realised he loved travelling and backpacking. Despite the fact that some people call his lifestyle outrageous,Wise is adamant that he lives a life full of nature, beauty, and freedom.

Here’s how Wise turned an ordinary truck into a livable tiny house on wheels.

Two years ago, Nathaniel Wise was living in Seattle, struggling to figure out what he wanted to do with his life. 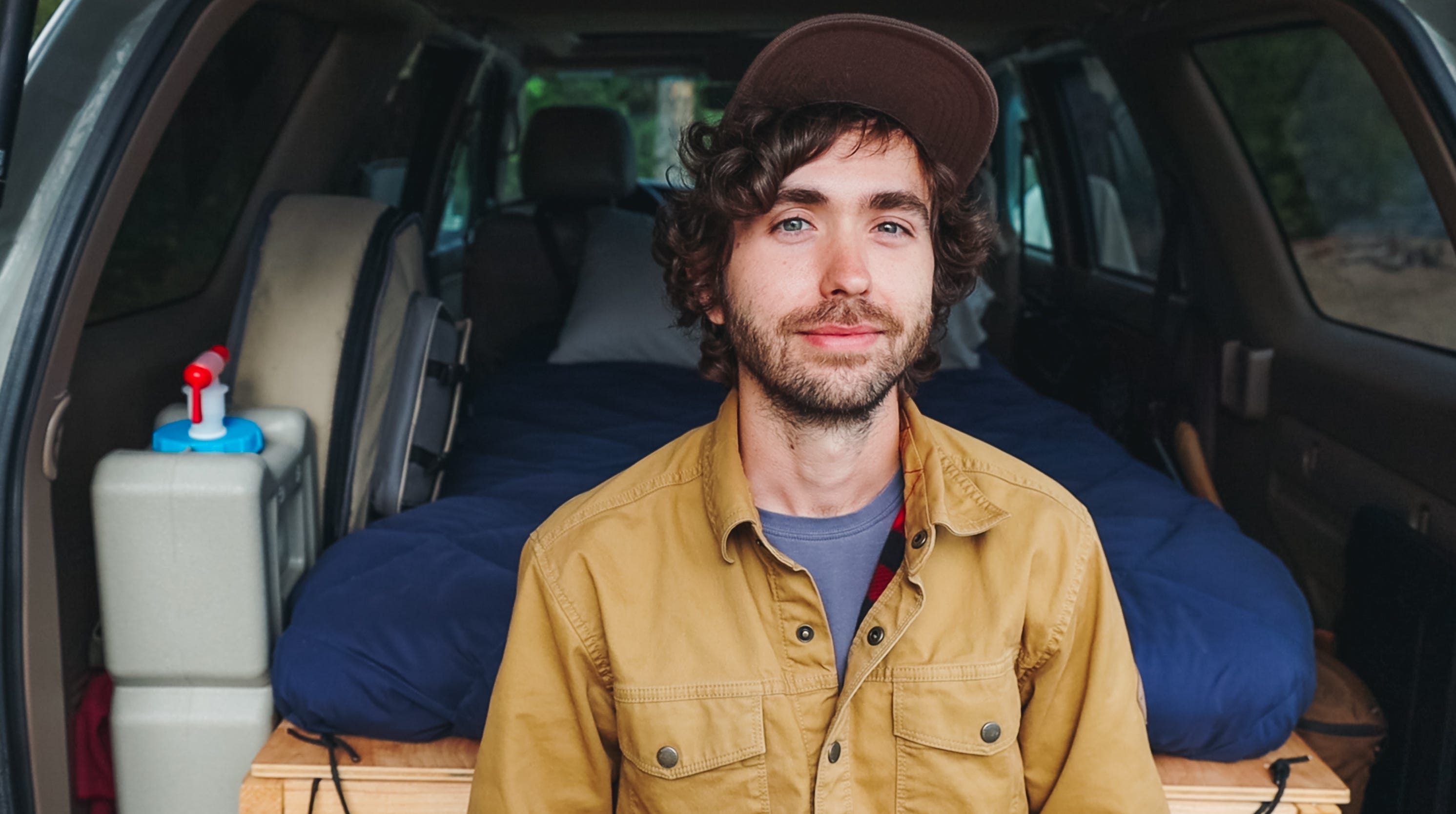 He lived in Seattle for three years while renting an apartment and bartending. Eventually, he found a new love for photography and wanted to pursue it full-time. He started by going for long hikes with his camera.

Wise realised he could combine his passions for hiking, travel, and photography into a completely new lifestyle.

“Backpacking taught me that I don’t really need to live with much,” Wise said. “Living on the road stems from backpacking. I started researching road life and VanLife, so it kind of spiraled from there.”

After doing his research, Wise realised living in his truck would give him the freedom he most desired. 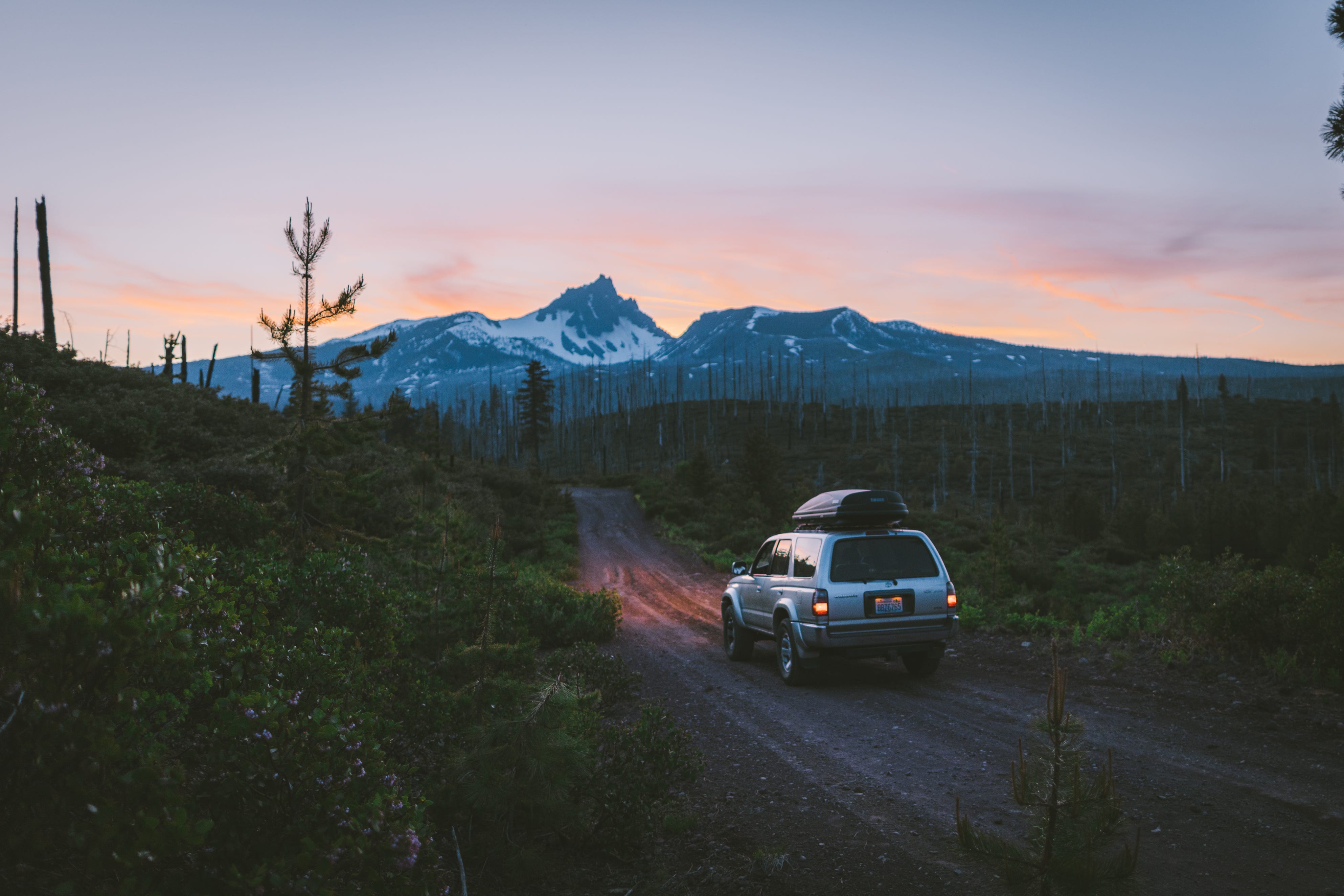 With VanLife on the rise, most people convert vans like the Mercedes-Benz Sprinter into tiny houses, but Wise felt that wasn’t right for him. He said he planned on going through mountain roads and difficult terrains during his travels, and the 4×4 truck he already owned was the best option to do just that.

“I’ve always been a minimalistic person and I don’t like to stay in one place,” Wise said. “The whole thing about road life is the spontaneity and the freedom. I just love being outdoors and just being able to pack up and go where ever I want.”

Once he decided to travel and live in his car in 2018, Wise had to convert it into a livable space. 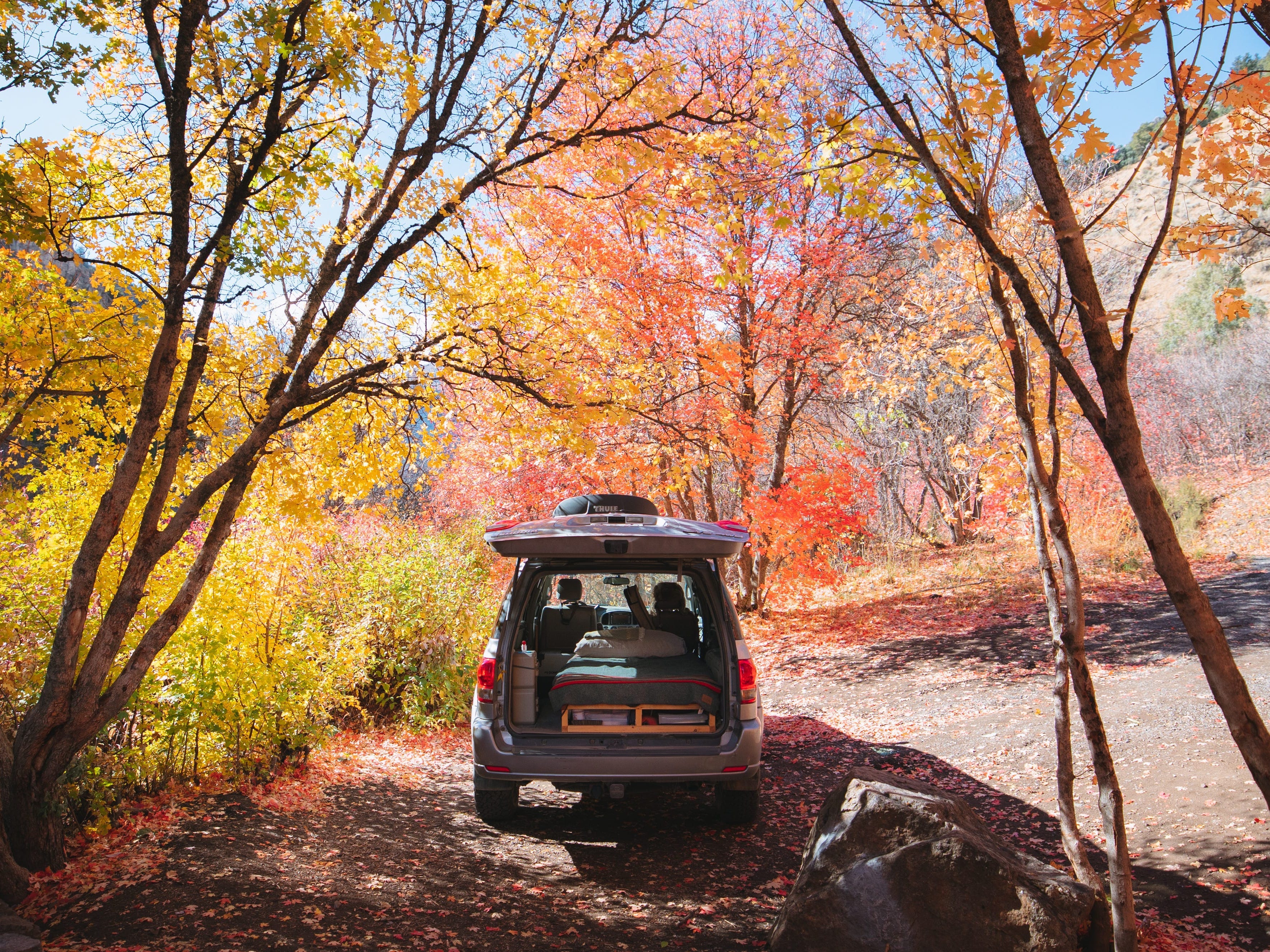 At the time, he had a Toyota 4Runner and only put an air mattress in the trunk to sleep on. He upgraded to a 2005 Toyota Sequoia for $US6,500, which he made more comfortable for full-time living.

In the back, Wise built a twin-size platform bed. 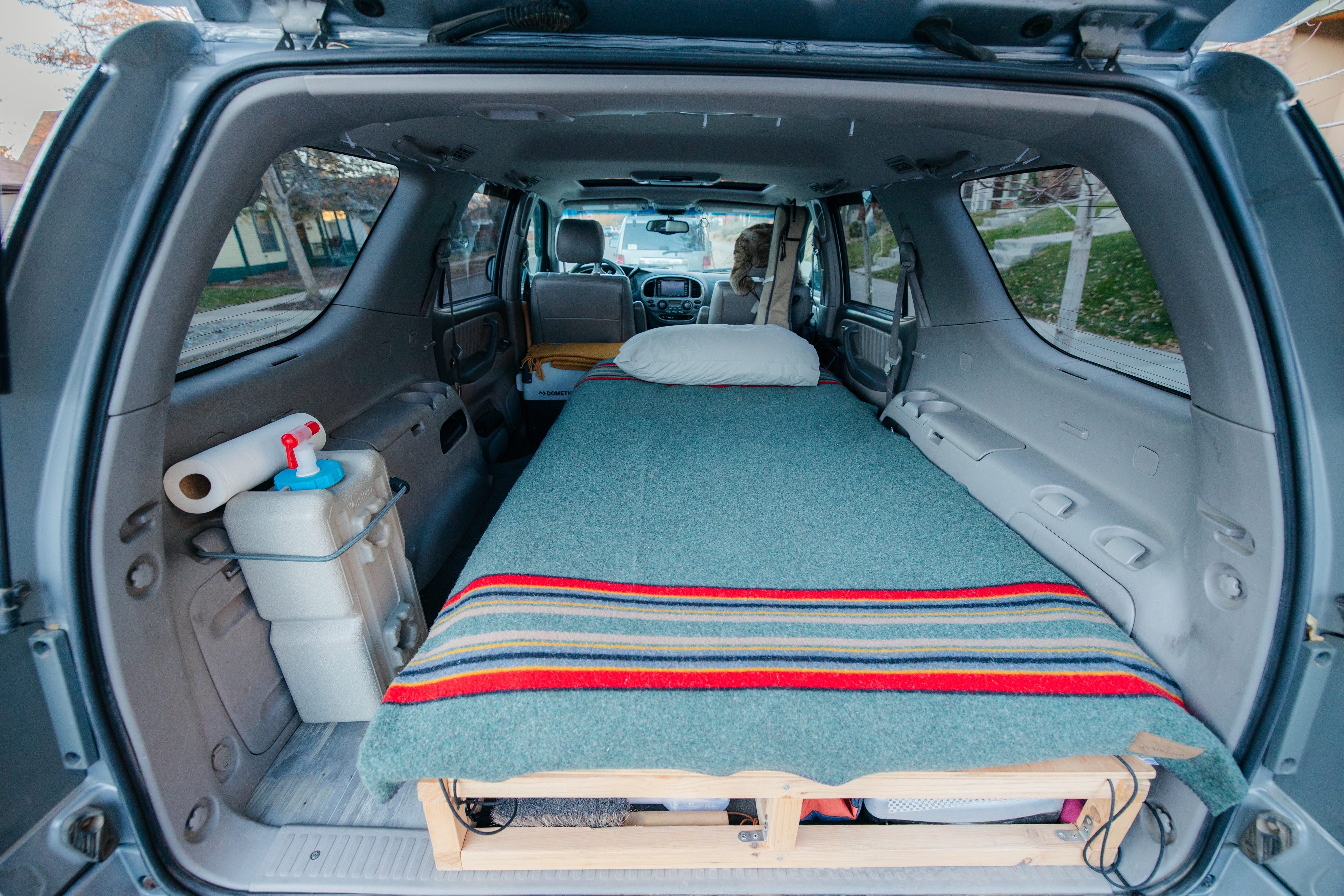 Courtesy of Nathaniel WiseThe bed is located in the back.

The bed takes up about three-fifths of the truck and is actually just a 4-inch latex mattress topper.

“I never find myself wanting more than that,” Wise said.

To the left of the bed, there is a 3.5-gallon water tank that is set in place with a bungee cord.

Under the bed acts as Wise’s storage space and closet. 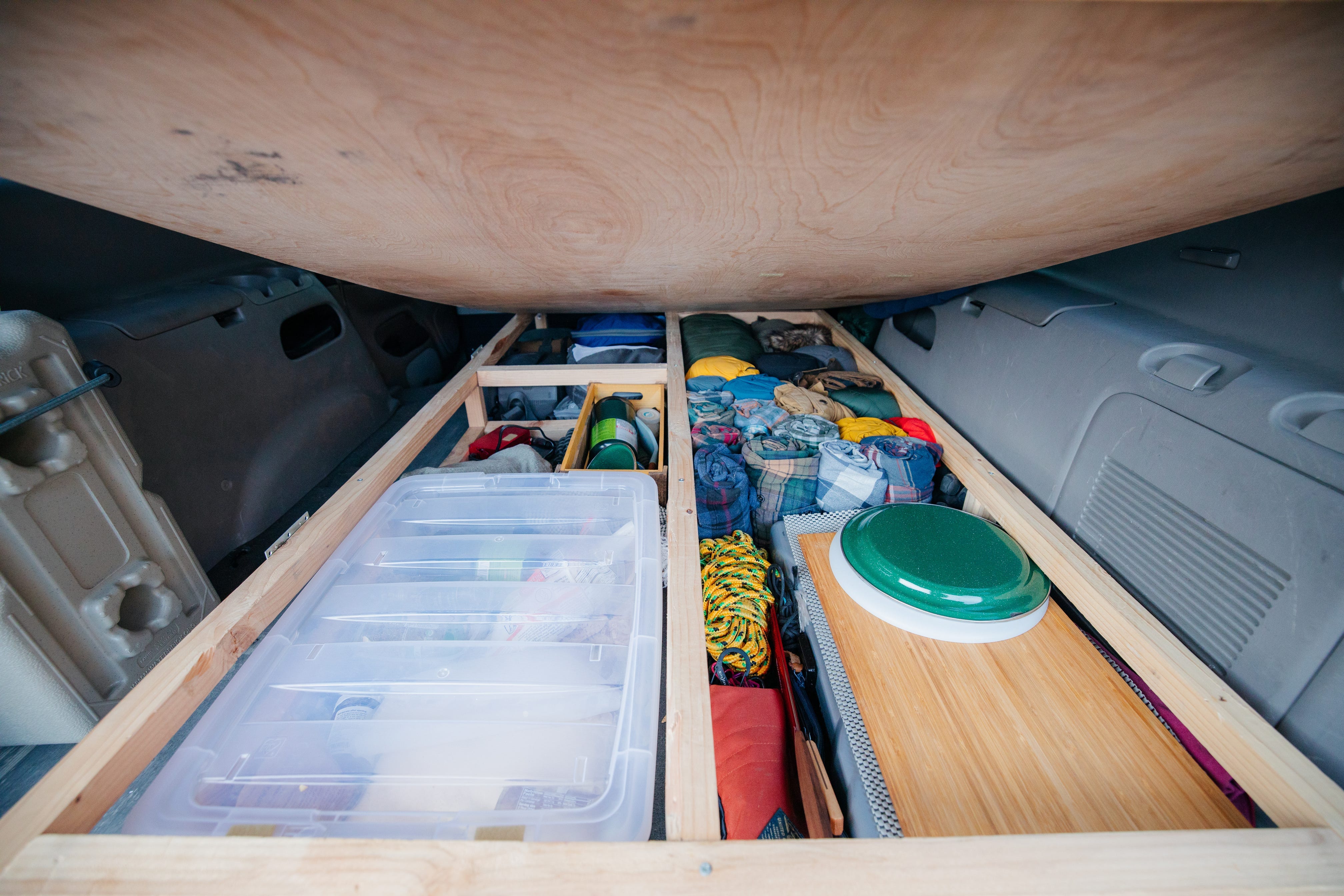 When the platform is raised, Wise can access his kitchen equipment, which includes a hot plate, a cast iron pan, two plates, and a bowl. The large Tupperware container holds his pantry items.

The area is also filled with 15 flannels, some down jackets, and a parka all rolled up to save space. There’s also a small spot for Wise’s camera equipment under the bed.

Behind the driver’s seat is Wise’s refrigerator.

Courtesy of Nathaniel WiseThe refrigerator to the left.

Wise said this fridge is a new addition to the car. In fact, he used to have a cooler that would hold his perishables.

“I didn’t have an actual fridge for the majority of my journey, but I have one now, and it’s amazing,” he said. “It’s really nice to have that.”

The battery bank is placed next to the refrigerator and charges as Wise drives. 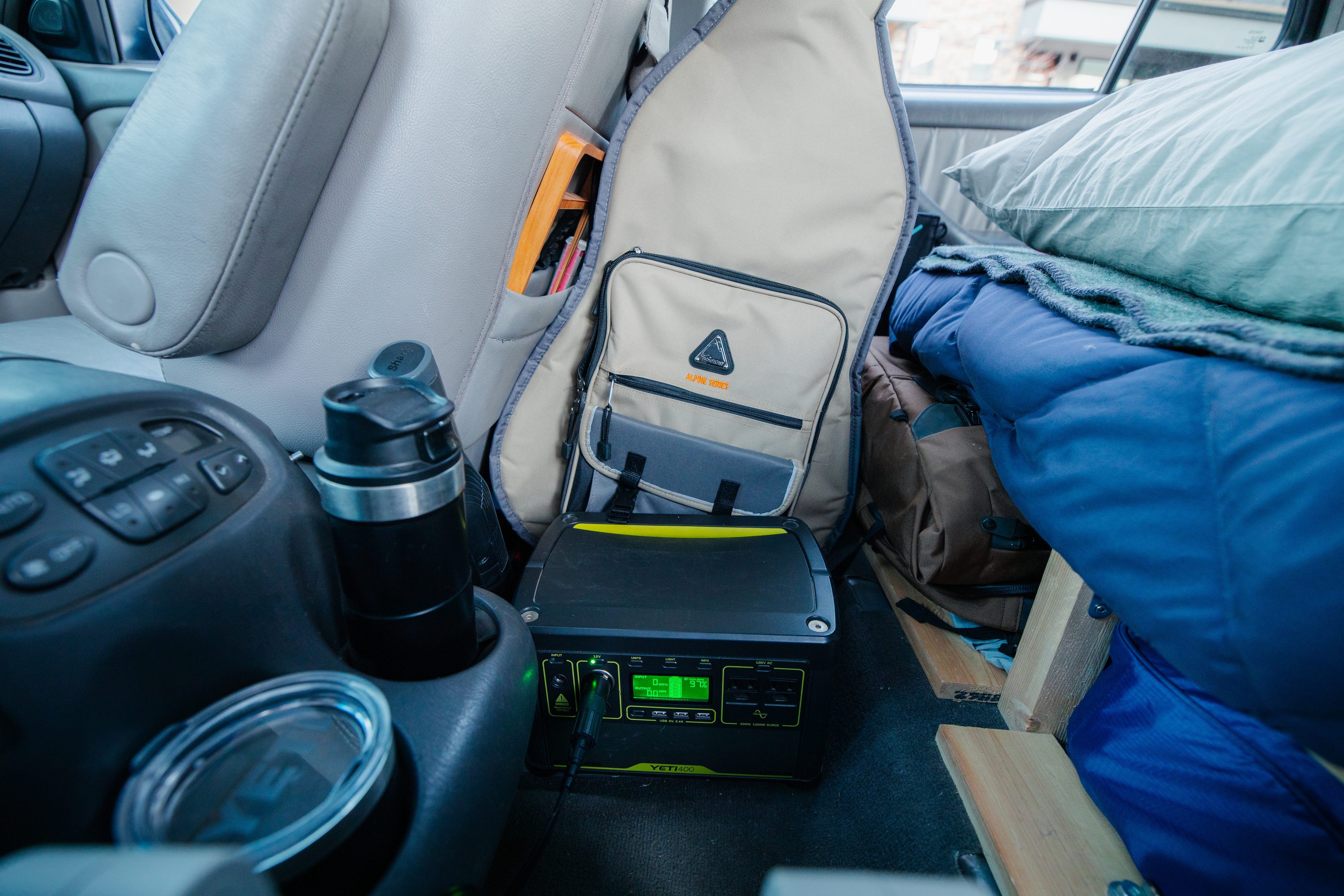 When he isn’t driving or camped out, he unfolds solar panels on the hood of the truck that charge the battery. Since electricity is free, he only has to pay for gas, which costs around $US200 to $US300 per month.

Next to the battery, Wise stores his acoustic guitar and a folding chair.

There’s additional storage space on top of the truck in the cargo box.

Courtesy of Nathaniel WiseThe cargo box on the roof acts as extra storage.

What he can’t fit inside the vehicle, Wise keeps overhead, like his winter and outdoor gear.

“I’ve whittled [my belongings] down as much as I possibly can,” he said. “It feels pretty spacious considering everything I have is in there.”

The truck does not have a kitchen or a bathroom, but Wise makes do without them. 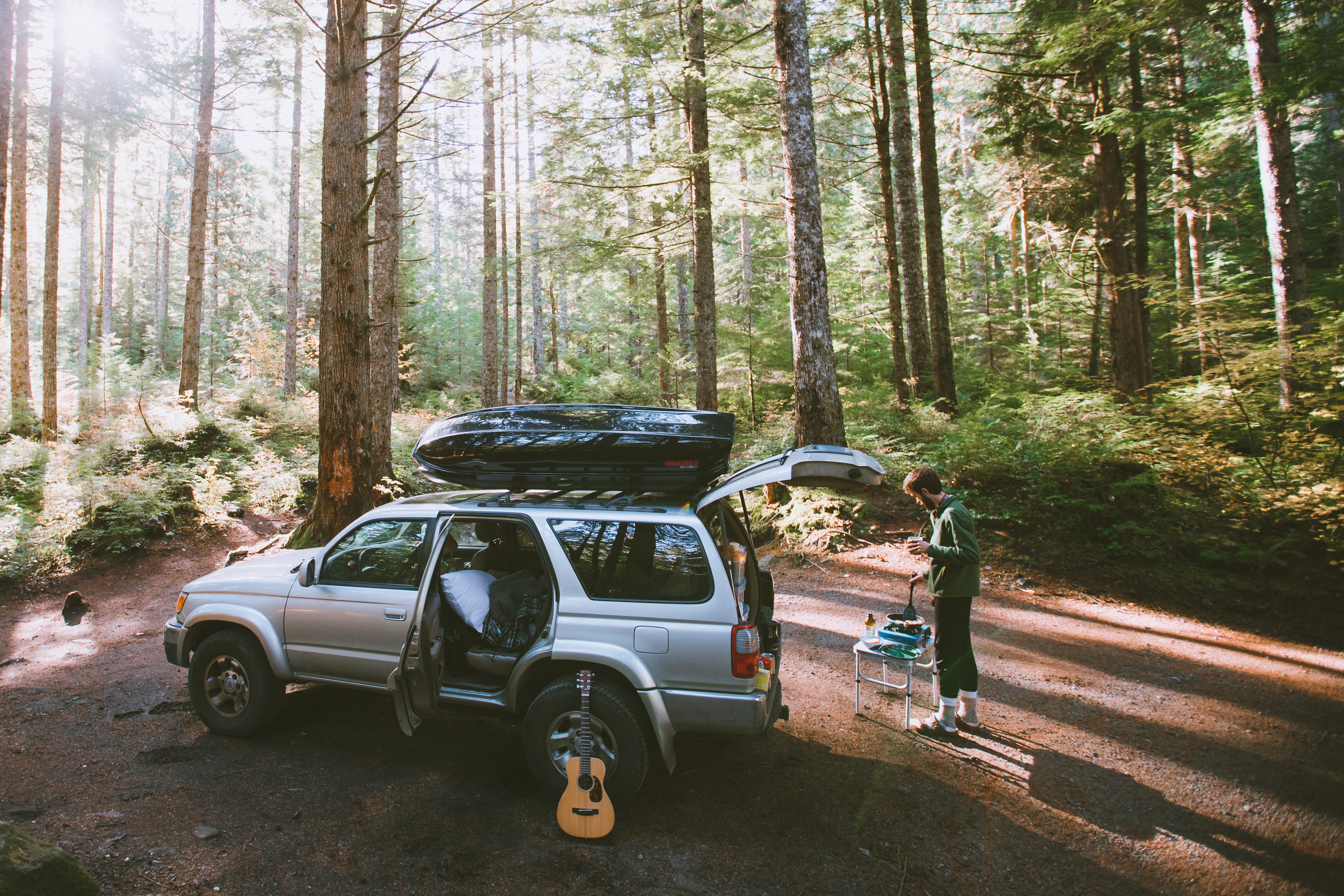 Courtesy of Christian SchafferWise cooking outside the truck.

Since the vehicle doesn’t have a kitchen like most tiny houses, he ends up cooking outside. Likewise, he has to look elsewhere when he needs to shower.

“It’s not always super easy to find a shower,” he said. “I have two national gym memberships. Between those two things and campgrounds, I can usually find a shower right where I am or within a 20-minute drive. I have struggled with that at times, especially now with COVID. There are a lot of restrictions on gyms, and their showers have been closed.”

Despite not having some comforts, Wise said it’s all worth it for the freedom he gets to enjoy. 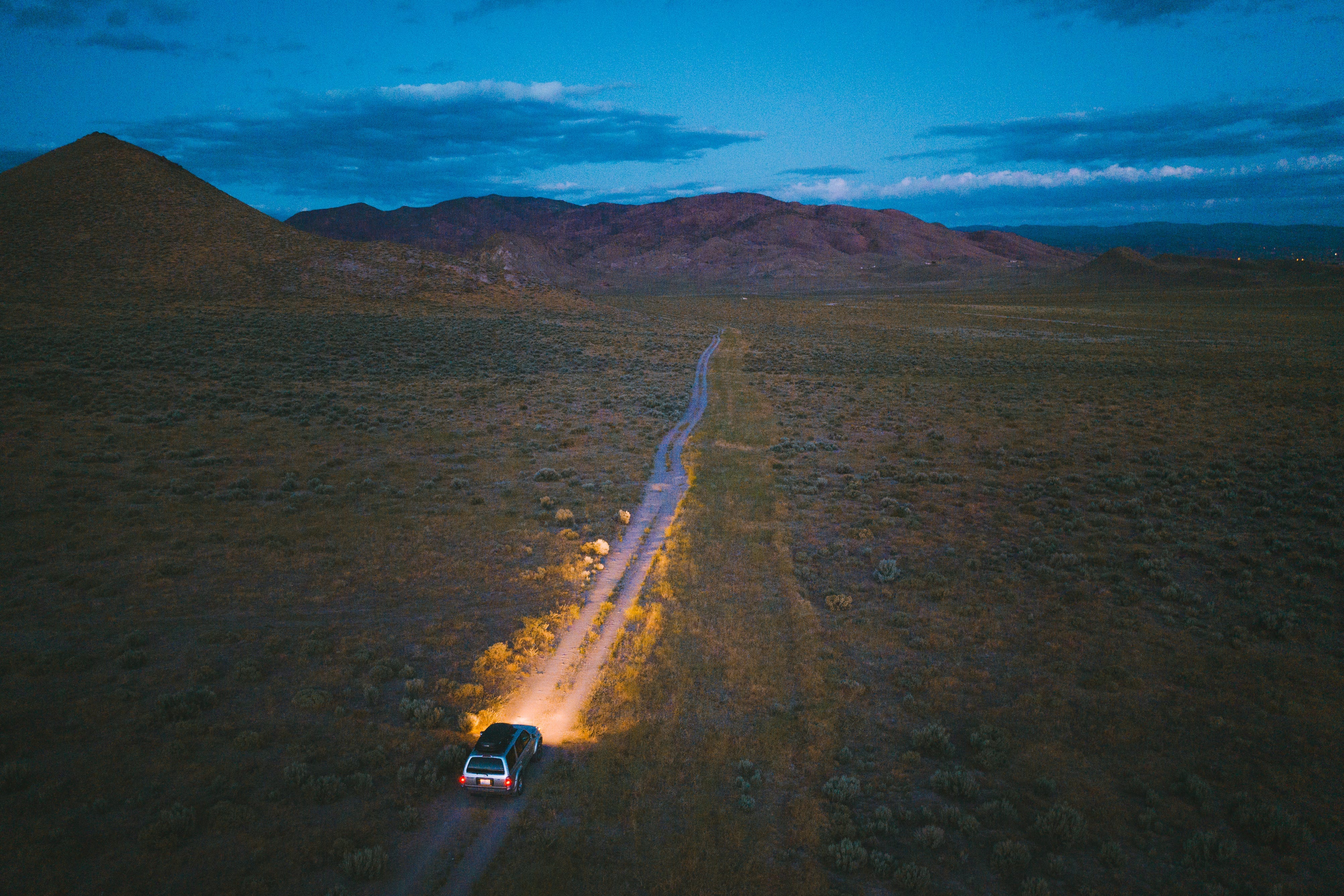 Courtesy of Nathaniel WiseOn the road.

Although his home base continues to be Seattle, he spends most of his time travelling, and he works as a full-time photographer. In the past two years, he has travelled to Yosemite, Sedona, and the Grand Tetons. But the freedom to go wherever he wants comes at a price.

“Having as much freedom as I have on the road can be overwhelming,” he said. “Sometimes you get decision fatigue, which for me, is a pretty real thing.”

Plus, Wise said he sometimes feels lonely on the road.

“It can be hard to maintain community because I’m not around the same group of friends,” he said. “You can start to feel disconnected or estranged in a way.”

“If I’m not adamant about adding structure to my day like having a morning routine and having these anchors, it can feel a bit aimless at times,” Wise said. 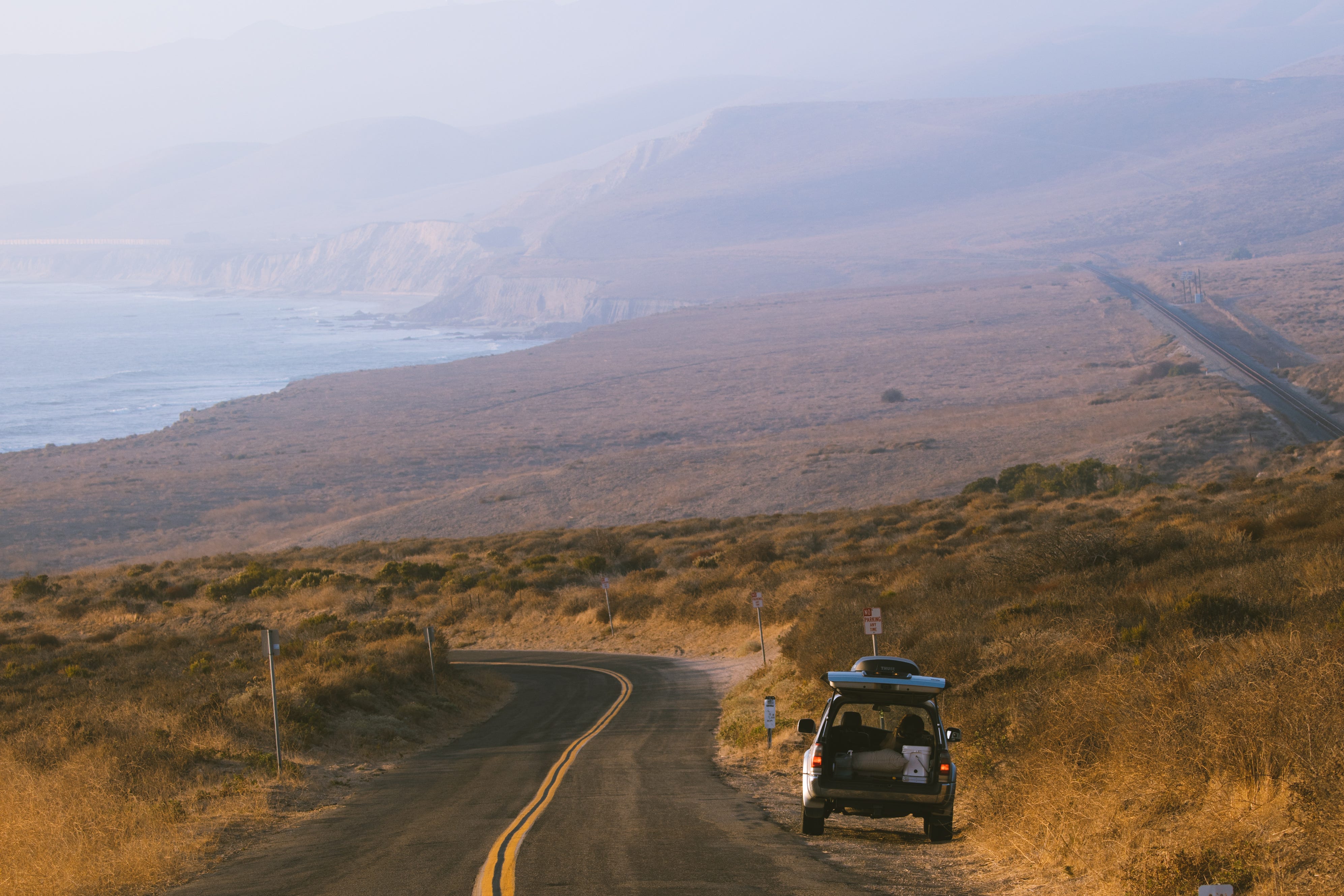 Courtesy of Nathaniel WiseOn the road.

To add structure to the limitless freedom, he said he tries to stick to a morning routine that includes waking up with the sunrise, making coffee, meditating, journaling, and working out.

Despite the fact that Wise said he feels like he’s living a fulfilled life, some people criticise his lifestyle. 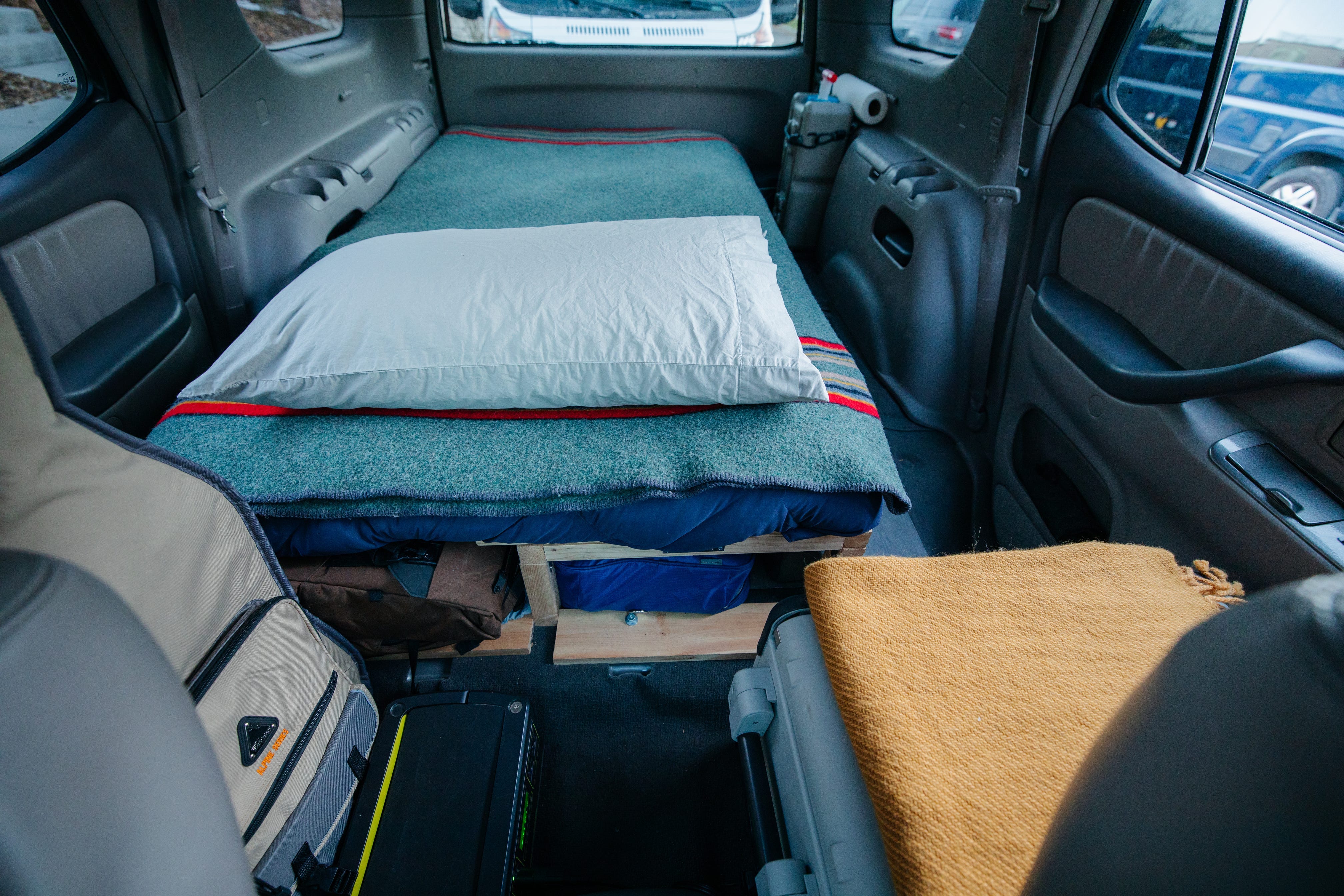 Courtesy of Nathaniel WiseIs it a home?

“People can be a little closed-minded with how they think people are supposed to live,” Wise said. “Society tells us we are supposed to do certain things and to go buy a big house. I don’t really view myself as homeless. I do feel like I have a home; it’s just a little home on wheels. It’s just much different than what a traditional home looks like.”

Wise even went as far as to say he is part of the tiny house movement. 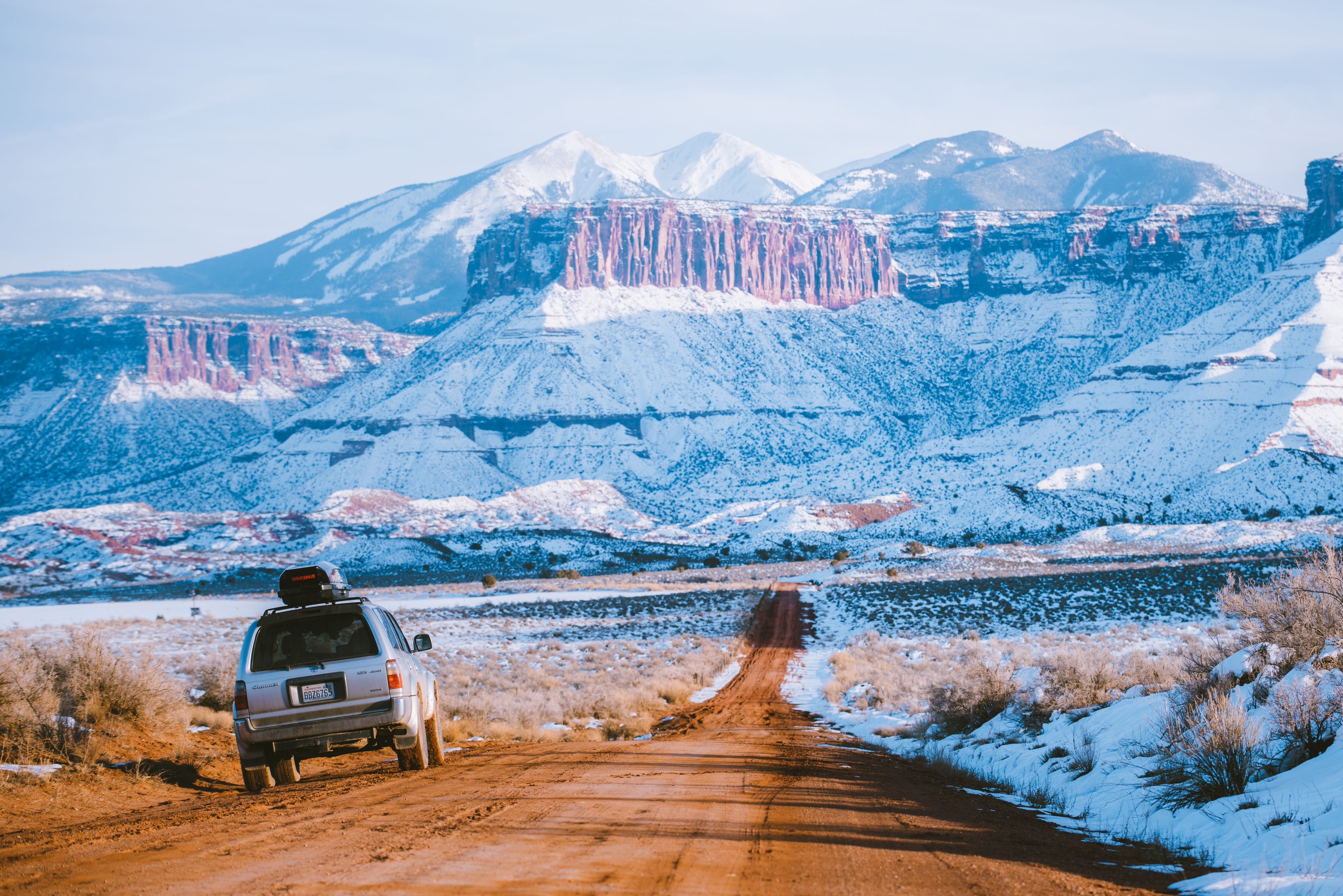 Courtesy of Nathaniel WiseIs it a tiny house?

The tiny house movement is filled with traditional tiny houses on wheels, schoolies, and camper vans, but Wise is carving out his own niche in the movement.

“I just wanted to have as much freedom as possible,” he said. “I also like the challenge of trying to do things a little differently. I feel like VanLife is the most popular thing right now, but it’s cool to say I can do it in a truck too.”

Wise isn’t alone: People have long chosen to live in their cars or other vehicles full-time – today, some use TikTok to share their stories and tips for living so tiny. Although these homes may look different than the others in the tiny house community, Wise said they share the same core values.

As Wise continues to challenge what the tiny house movement looks like, he’s enjoying his life on the open road. 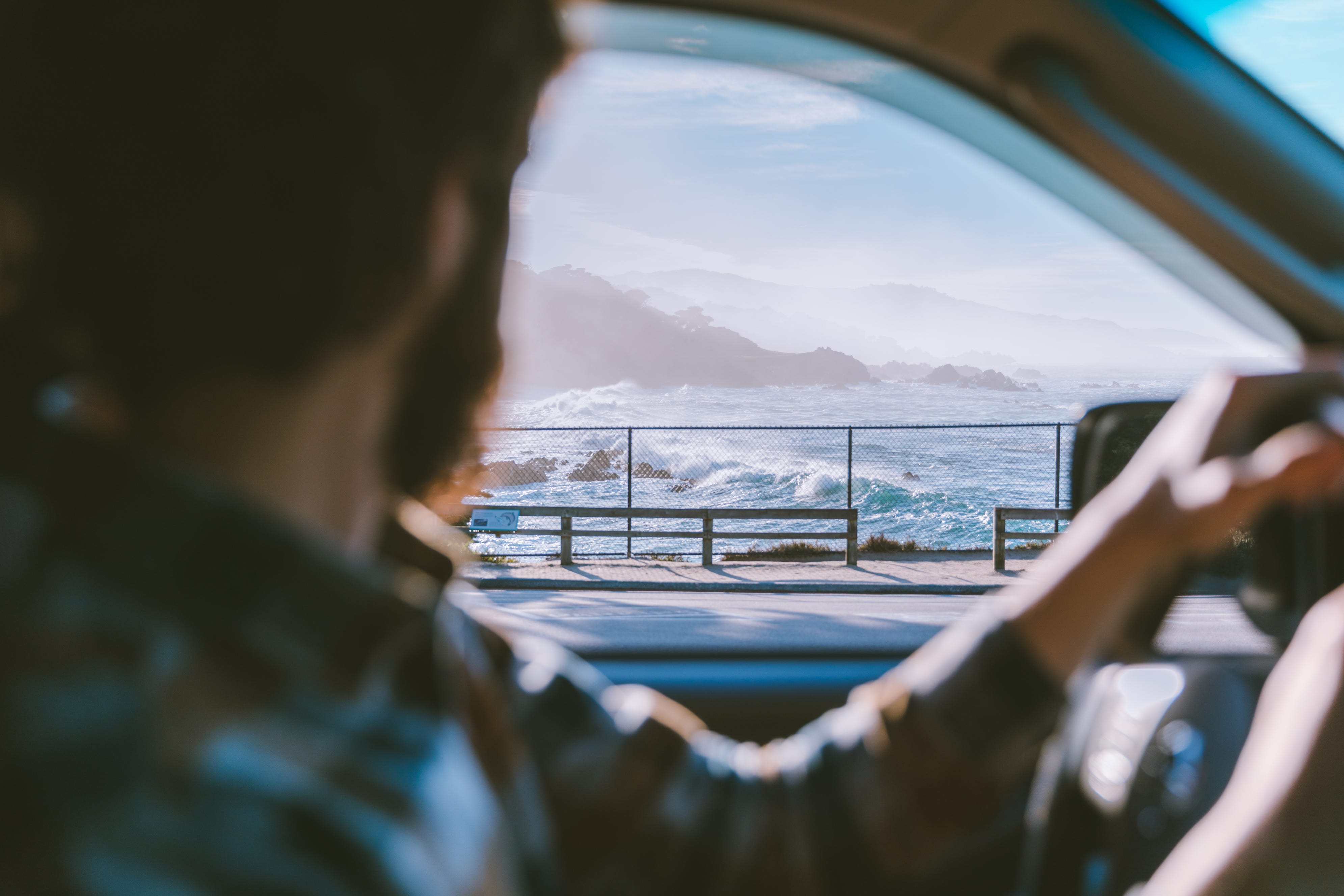 Courtesy of Nathaniel WiseWise at the wheel.

However, he has one piece of advice for people who can’t understand his chosen lifestyle: Give it a try.

“A lot of people haven’t gone on an extended road trip and lived out of the back of their car,” Wise said. “It’s actually very freeing and amazing.”

Do you live in a tiny house, RV, camper van, or other unusual housing structure and want to share your story? Reach out to Frank Olito at [email protected]