Cybercrime against healthcare groups 'worldwide' is on the rise during coronavirus pandemic, top UN official warns 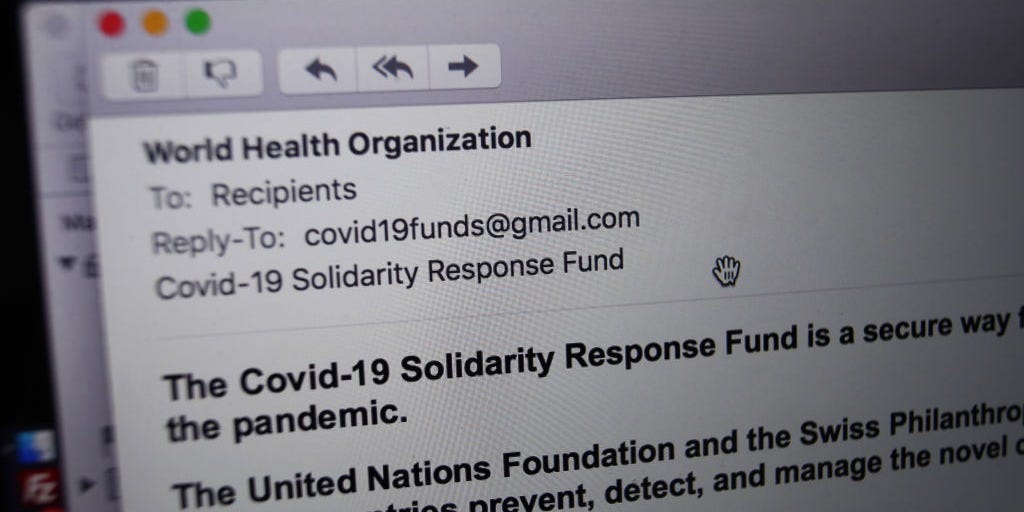 Yui Mok/PA Images via Getty ImagesA phishing email from someone posing as the head of the World Health Organisation (WHO), and asking recipients to donate money to a coronavirus fund, received on a laptop in London.

The disarmament chief for the United Nations said there has been a sharp rise in cybercrime during the novel coronavirus pandemic,the Associated Press reported, signalling rising concerns for the safety of medical centres and information.

Izumi Nakamitsu said at a meeting of the UN Security Council on Friday that there has been a 600% increase in malicious emails during the pandemic, in addition to “worrying reports of attacks against health care organisations and medical research facilities worldwide,” according to the AP.

Nakamitsu said the threat facing information and communications technology “is urgent” as it is estimated that one attack is estimated every 39 seconds and according to the International Telecommunications Union, “90 countries around the world are still only in early stages of addressing cybersecurity issues.”

Estonia’s Prime Minister Juri Ratas said during the online meeting that the need for “a secure and functioning cyberspace” is critical, the AP reported, particularly considering cyberattacks targeting hospitals and research facilities, which he condemned.

“Those attacks are unacceptable,” Ratas said. “It will be important to hold the offenders responsible for their behaviour.”

Cybersecurity has emerged as a major concern amid the coronavirus pandemic, which has forced most of the world to move interactions online. In the US, official activities like unemployment claims filed online with outdated state systems and presidential primary voting have been identified as high-risk operations for fraud.

Last week, federal officials said an international group launched a sophisticated attack on US unemployment systems with a system that garnered millions of dollars in payments, The New York Times reported. The Secret Service said the attack was a well-organised Nigerian fraud ring that could lead to “potential losses in the hundreds of millions of dollars” by using information like social security numbers found in past breaches, according to the Times.