One of the White House’s most senior advisors on Sunday emphatically shot down rumours that First Lady Michelle Obama may run for office some day.

“No. I’m absolutely, 100% positive that that will never happen,” Valerie Jarrett, a Senior Advisor to President Barack Obama who has a relationship with both Obamas going back decades, said when asked about the prospect on “Meet the Press.”

Michelle Obama’s high profile has recently led to a round of speculation that the Chicago native could be eyeing a bid for office. Senator Mark Kirk (R-Illinois) is up for re-election in 2016, creating a potential opening, and after Hillary Clinton, there is at least one precedent of a former first lady running for the U.S. Senate.

However, Obama and others have insisted she won’t run.

“No, it will not be political,” Obama said last Monday of her next act. “It definitely will not be. It will be mission-based, service-focused.”

On “Meet the Press” Sunday, Jarrett was also asked if she might consider her own run for office.

“Unlikely,” Jarrett replied. “Not as definitive as the First Lady but highly unlikely.” 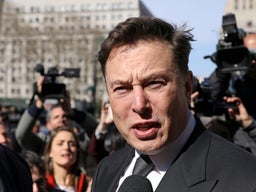