This tiny NYC penthouse costs $1,843 per square foot, but every detail was designed so it 'functions like one twice its size.' Take a look inside. 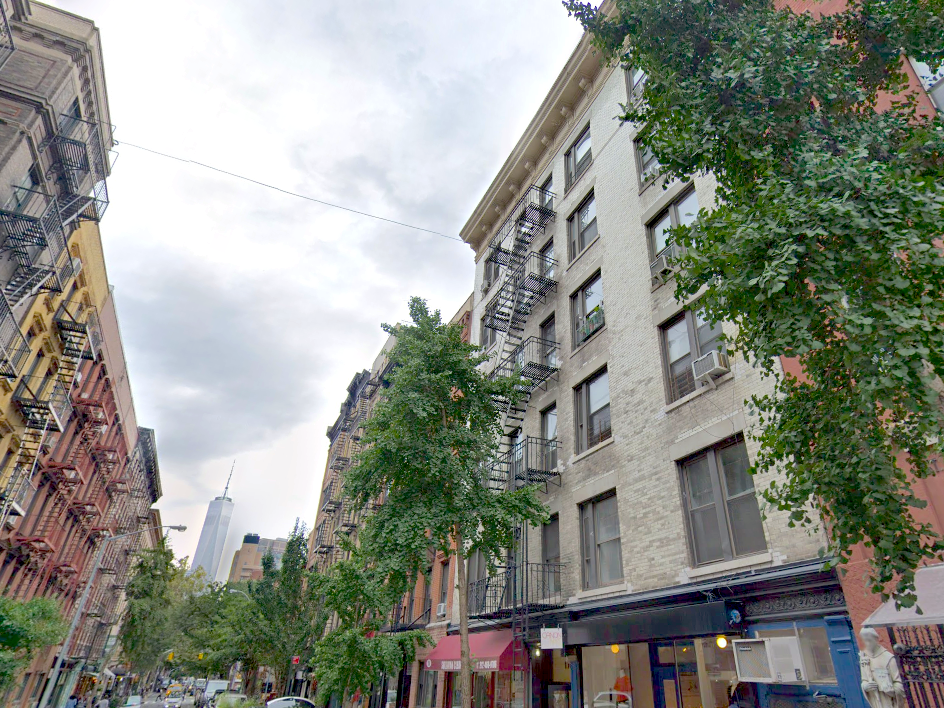 Google MapsThe apartment is in the SoHo neighbourhood of Manhattan.

New Yorkers are used to paying a lot to live in small spaces.

The median home price in Manhattan is $US1,372 per square foot, according to Zillow.

A renovated apartment in Manhattan’s SoHo neighbourhood is on the market for $US645,000 – for a space of 350 square feet, which makes the cost $US1,843 per square foot.

For comparison, the typical American home is 2,687 square feet and costs $US244,054, according to a 2016 report from the Census Bureau and data from Zillow. That makes the average price per square feet about $US91.

The compact New York apartment, which could fit inside the average US home about seven-and-a-half times, was created by Graham Hill, founder of lifestyle and design company LifeEdited and advocate for minimalism and living with less.

“… The houses I design contain less stuff and make it easier for owners to live within their means and to limit their environmental footprint,” Hill wrote in The New York Times in 2013.

The 350-square-foot SoHo home is the second Hill has renovated in the same building, according to Forbes. The other unit, a slightly more spacious 450 square feet, sold in 2014 for $US790,000.

For Hill, Americans simply don’t need so much space.

“Americans are using three times as much living space today as they did in the 1950s. Even with all this space, we’re supporting a 22-billion-dollar personal storage industry. I see a home like this as a compelling alternative to the status quo,” Hill told Dwell magazine in 2012, referring to the first apartment he renovated in at 150 Sullivan Street.

Here’s a look inside the tiny yet functional home in SoHo.

The apartment is on Sullivan Street in SoHo, a street lined with boutiques, bakeries, and cleaners, as well as an Italian restaurant and a deli. 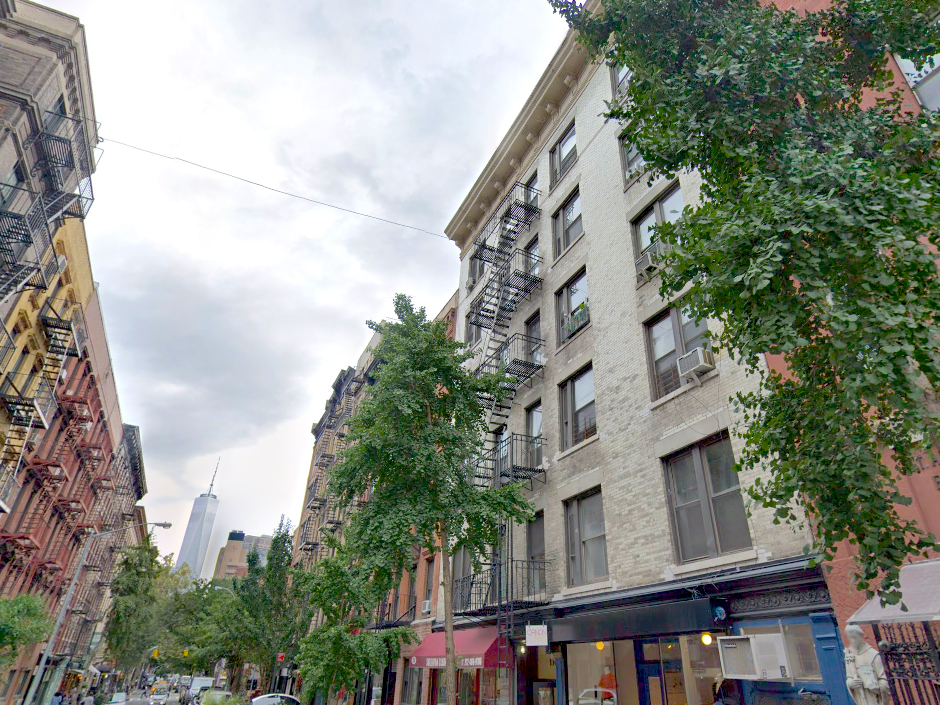 The apartment is the penthouse unit of a 40-unit pre-war co-op building built in 1900. 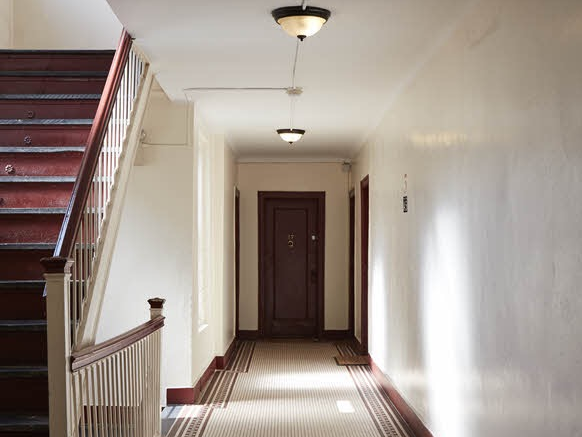 Finished in 2016, the apartment was inspired by a “less but better” concept that emphasises simplicity and highly functional spaces. The home features herringbone oak floors and walnut cabinetry in the living space. 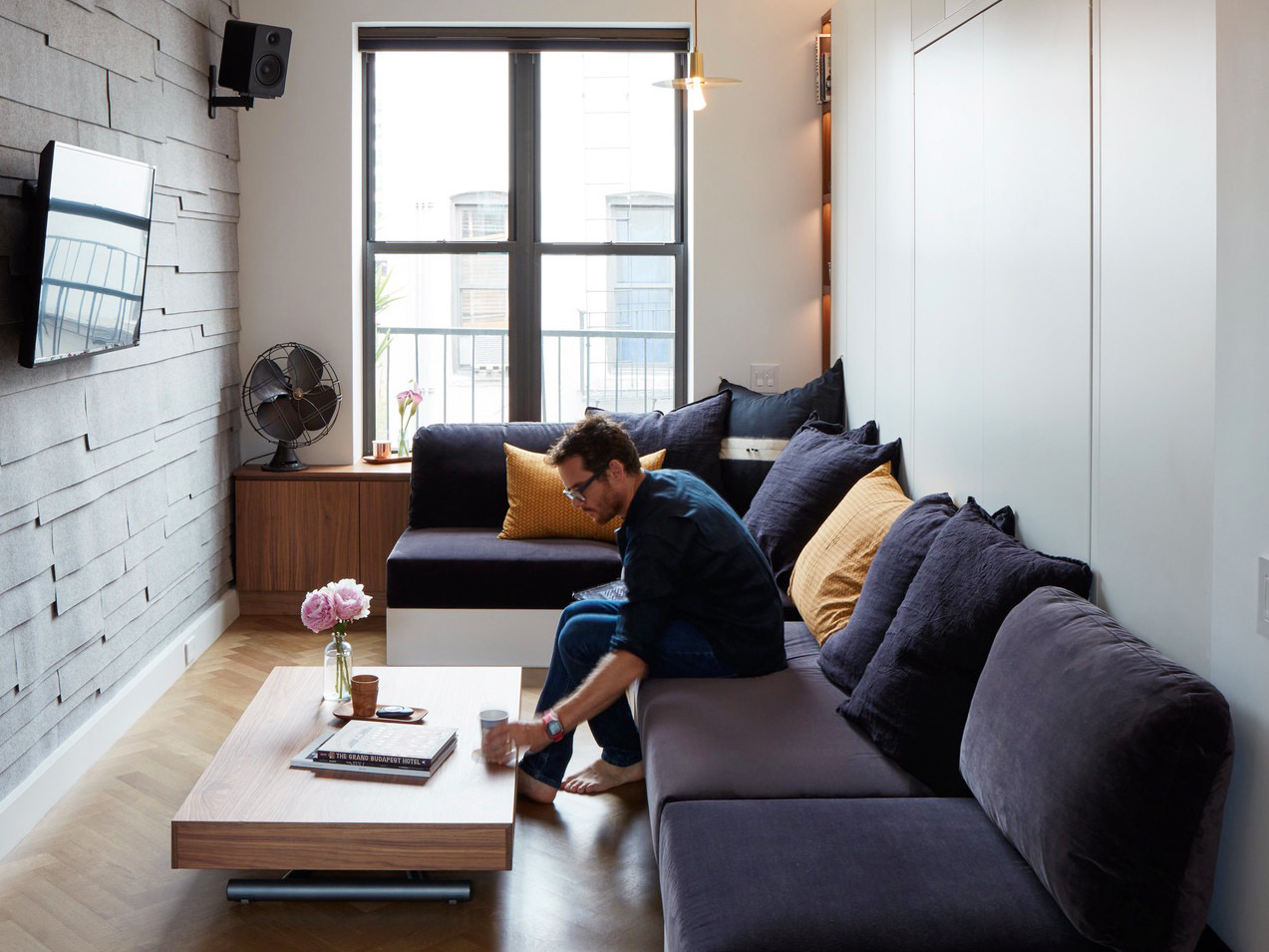 All of the furniture was designed to serve more than one purpose. The sectional can be reconfigured within the space and the table can be used at coffee table height or elevated to serve as a dining table. 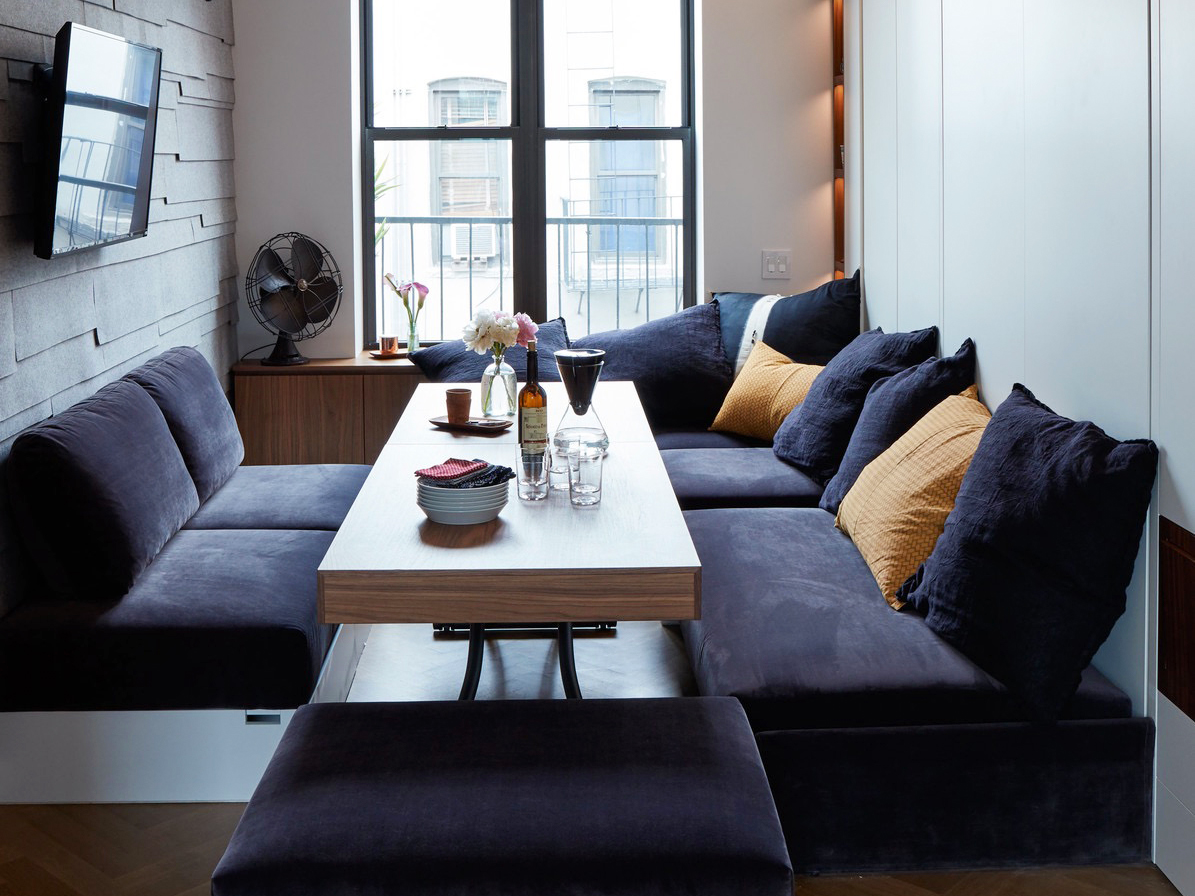 With the table adjusted to eating height and the smaller section of the couch moved to the other side of the table, the living space can transform into a dining room. 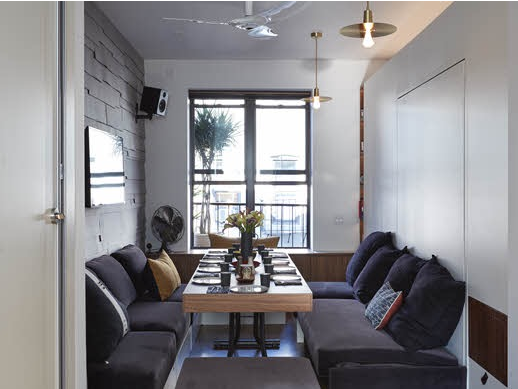 Hill said he believes the 350-square-foot home “functions like one twice its size.” 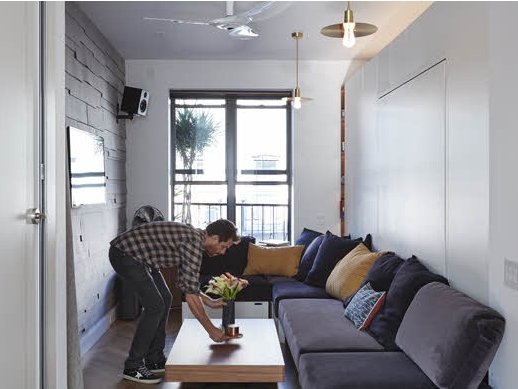 The living space can fit about 10 people for dinner. 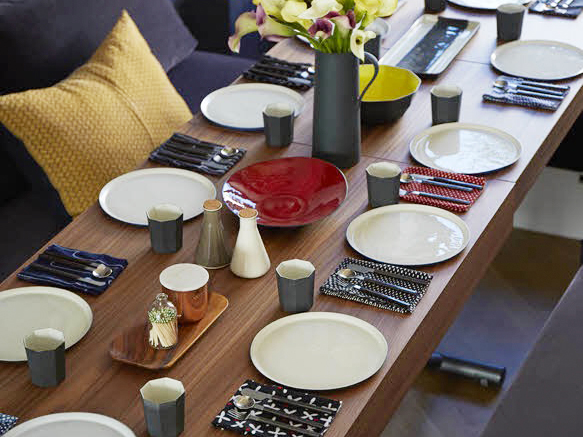 The couch transforms into a Murphy bed, turning the living room into a bedroom in a matter of seconds. 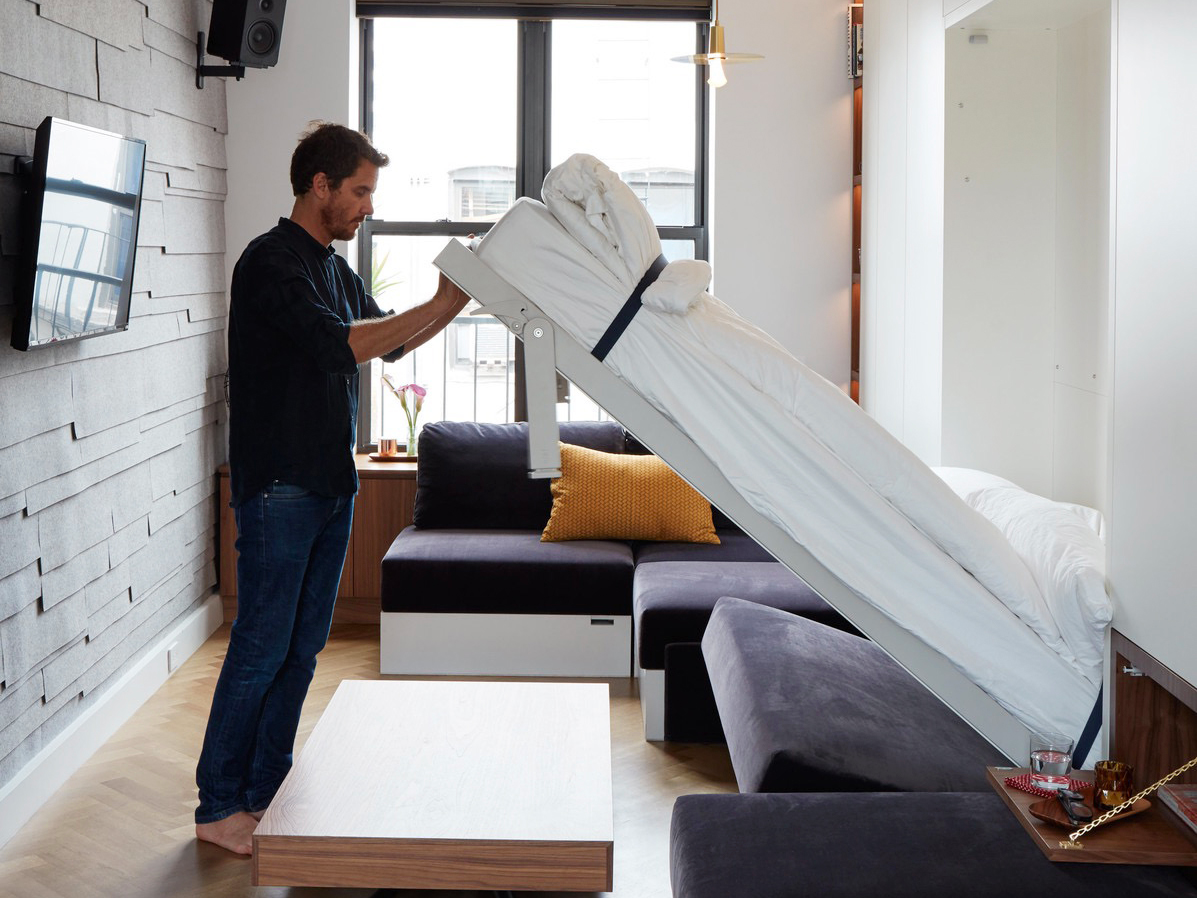 The sofa has hidden pull-out storage compartments for shoes or other items. 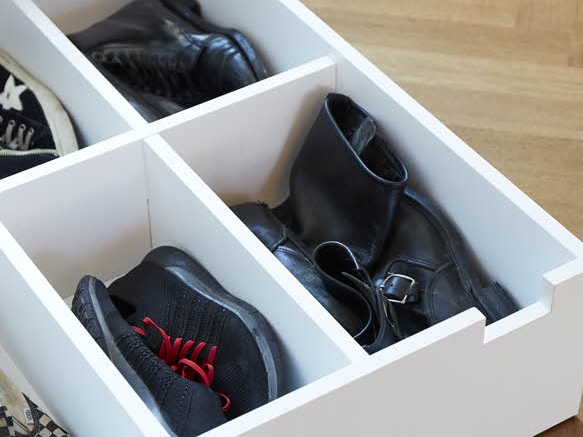 The room can be rearranged to match whatever the occasion calls for. The listing describes the apartment’s living space as “a room that transforms from bedroom to living room to dining room to boardroom.” 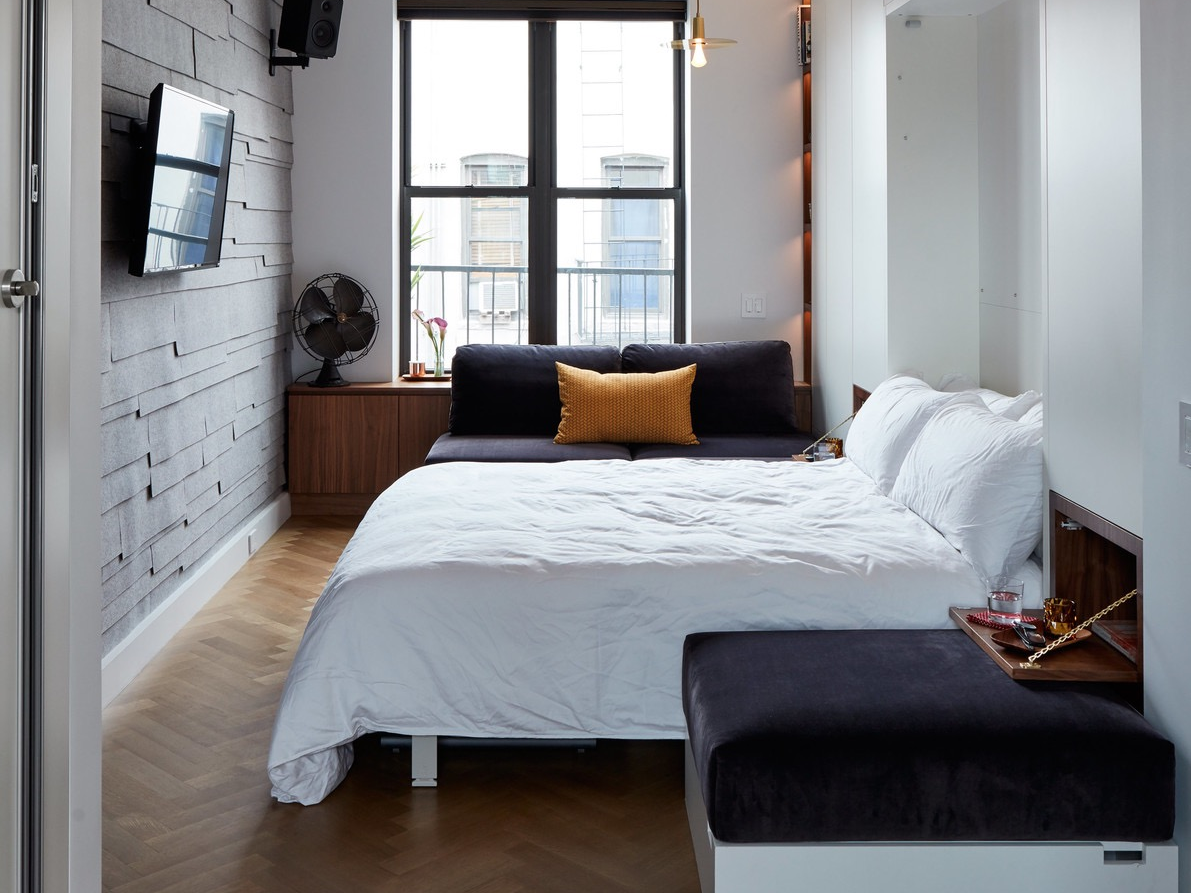 Small touches such as this retractable night table next to the bed make the space even more adaptable. 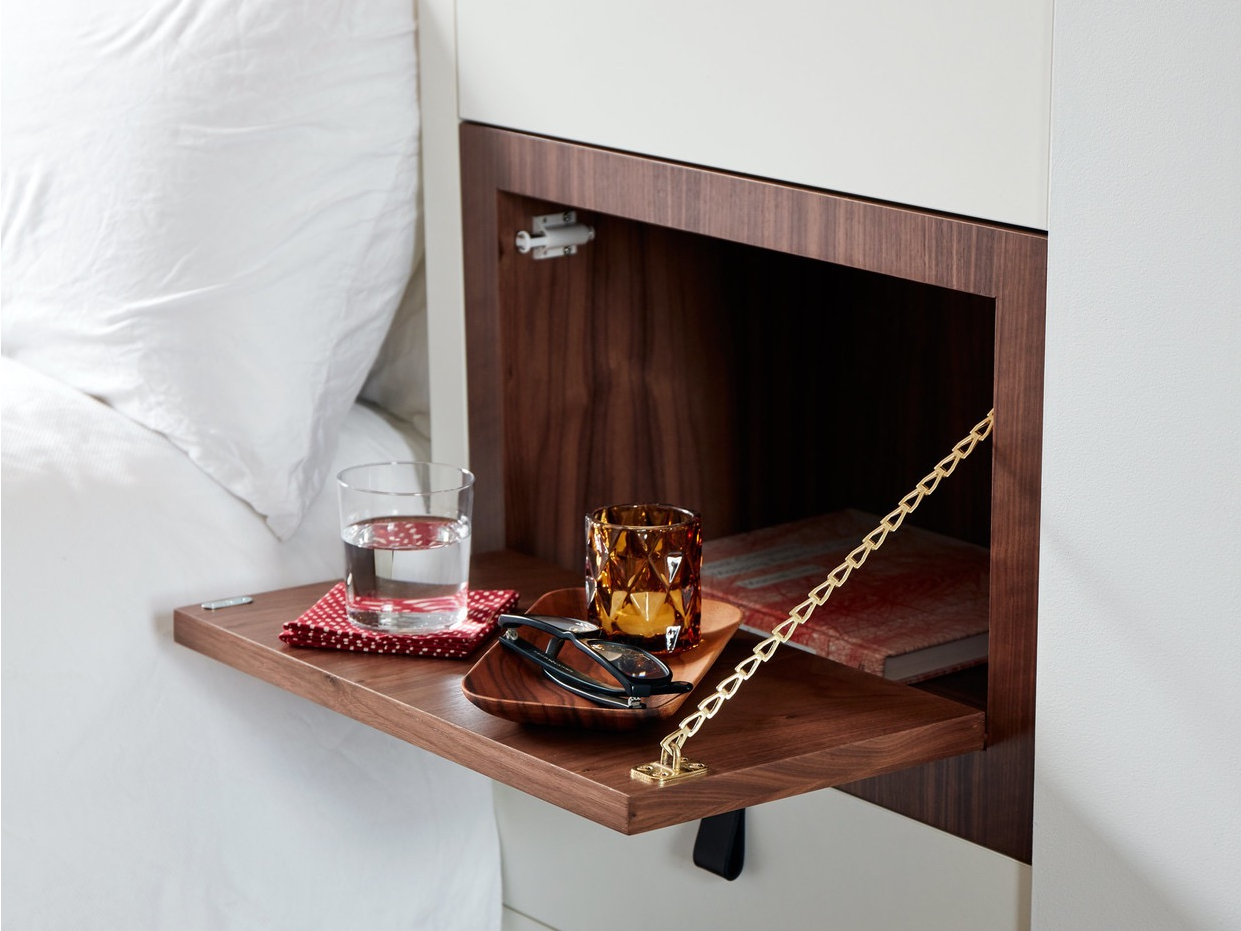 There is a closet in addition to the sofa’s storage compartments. 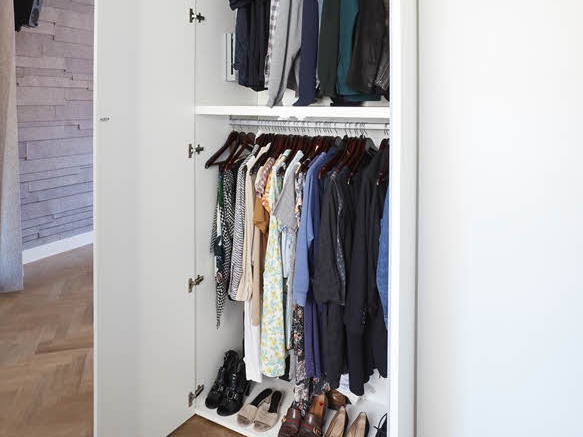 A short hallway leads from the living room to the home office. 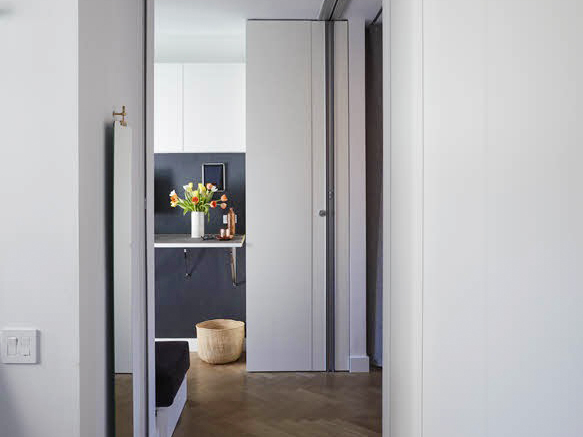 The room fits a standing desk, and the smaller section of the sofa can be moved into the office … 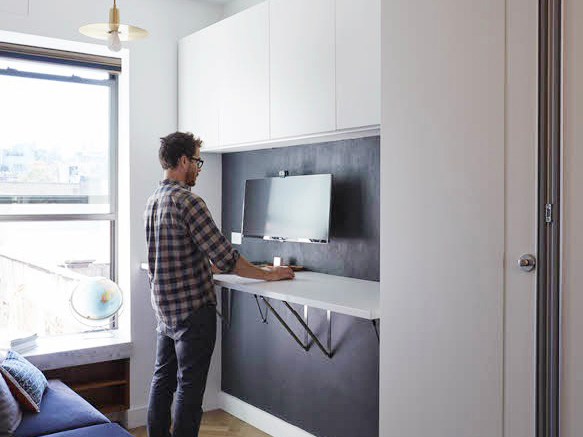 … and can transform into a guest bed. The desk folds up on the wall to accommodate the bed. 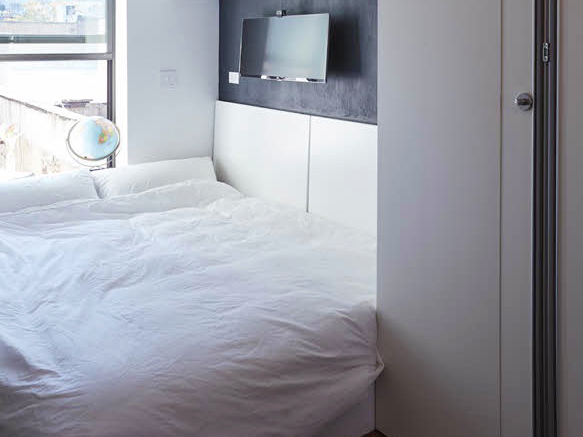 On why his apartment costs so much more per square foot than the Manhattan average, Hill said, “There are very few places that have that much consideration and thought, so yes it’s going to be a little expensive.” 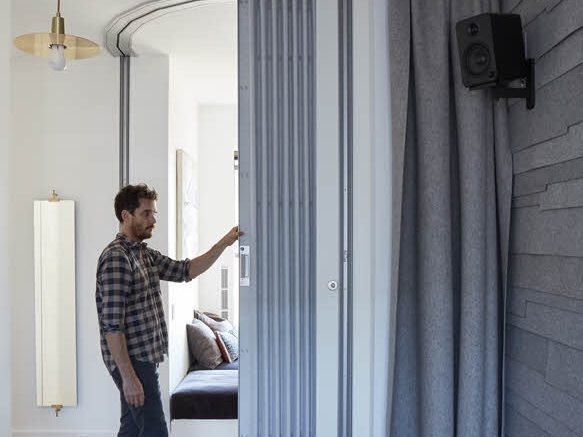 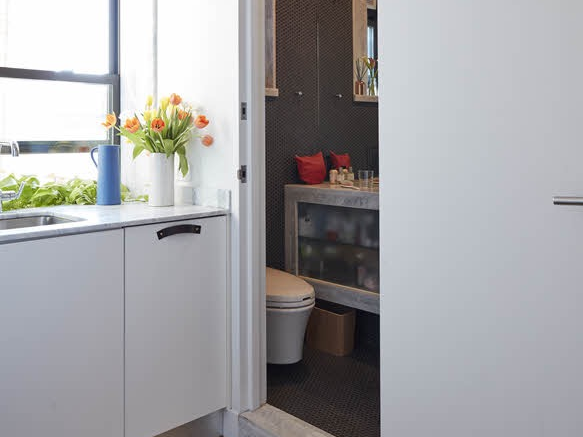 The compact bathroom has storage space tucked away under the sink. 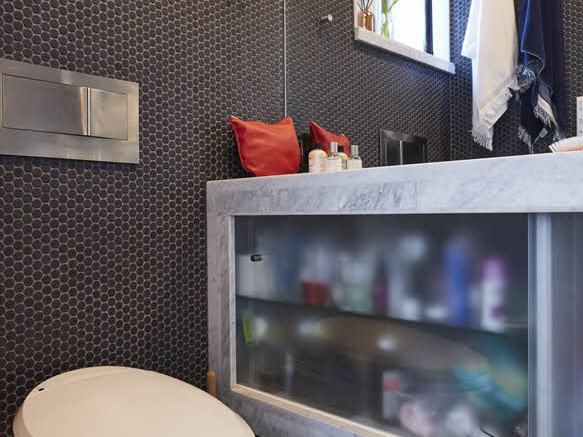 The kitchen includes a built-in speed oven, a dishwasher, and a Franke water filter for maximum water efficiency. 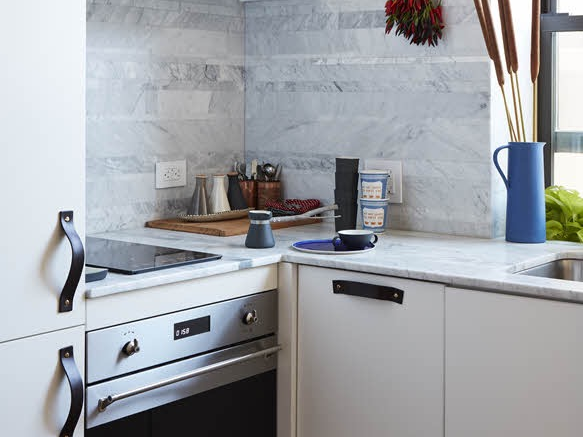 Like the rest of the apartment, the kitchen was designed to optimise storage space. 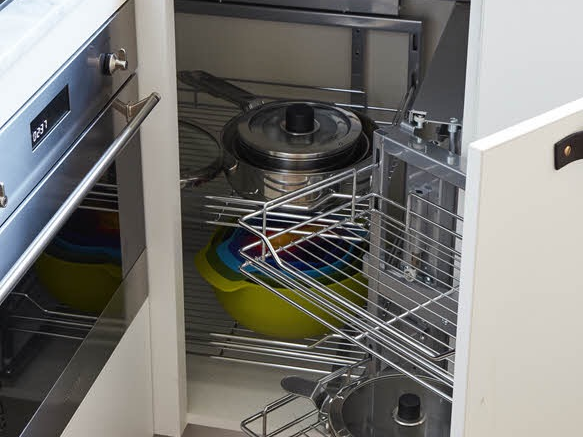 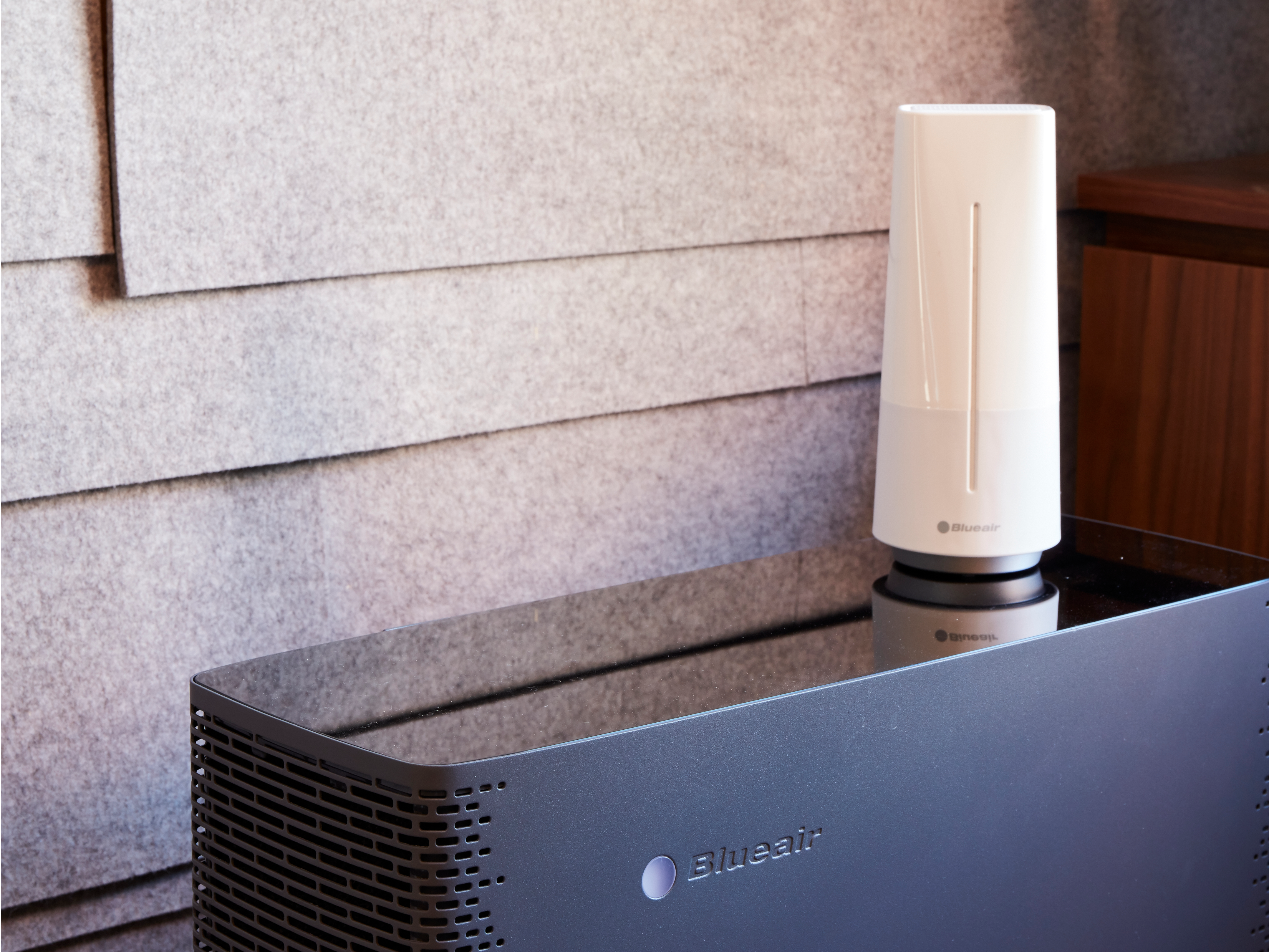 An automated August Smart Lock allows for opening the apartment door with a mobile phone instead of a key. 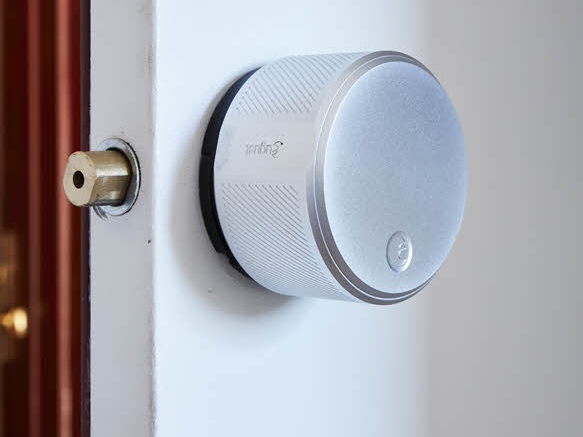 Hill came up with several different floor plan options, depending on whether you want to use the apartment as a studio or to host guests. Shown here is the sleeping arrangement for two people in one bed. 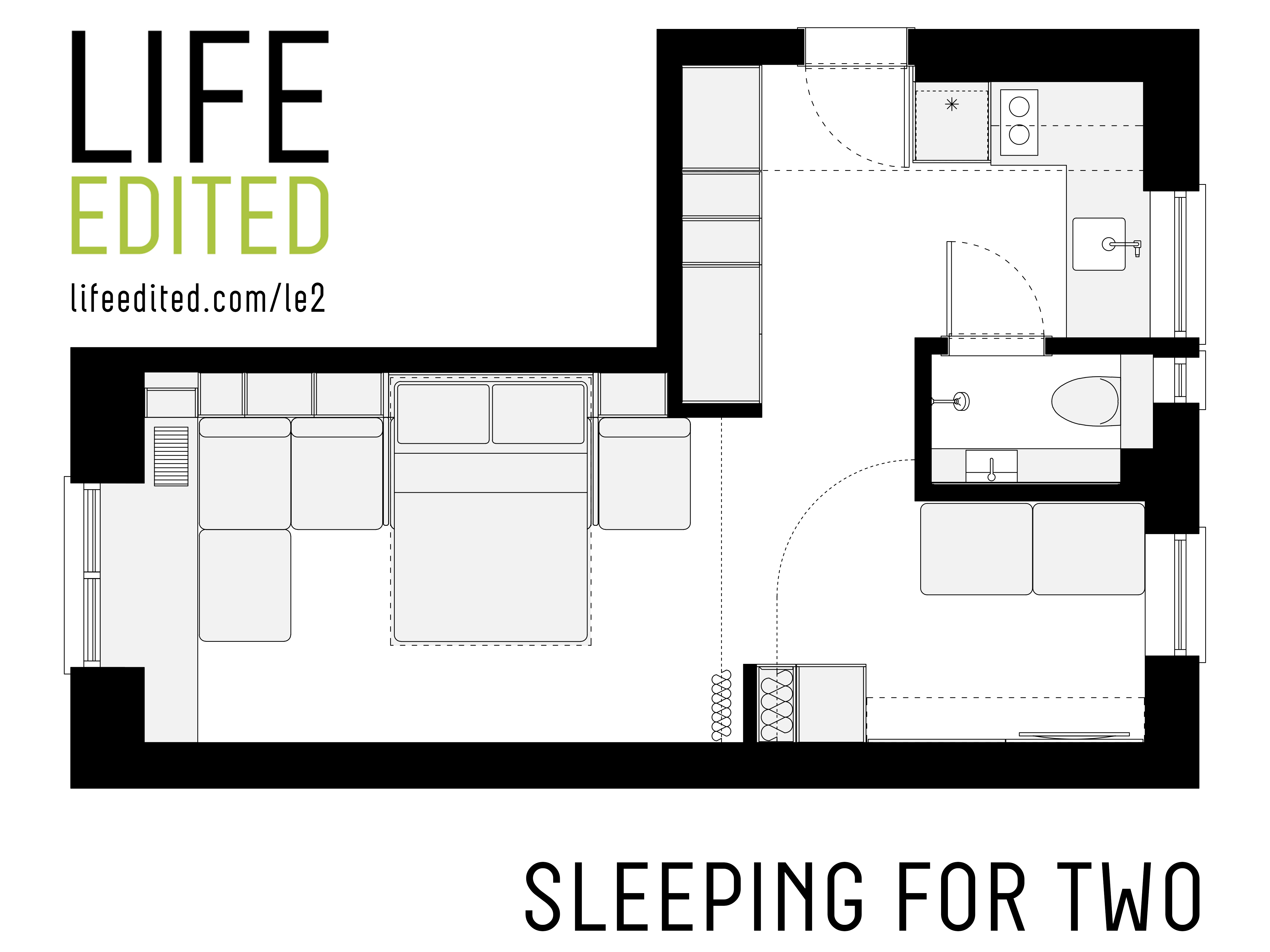 Another arrangement allows for an extra bed to fit into the home office and sleep an additional two people. 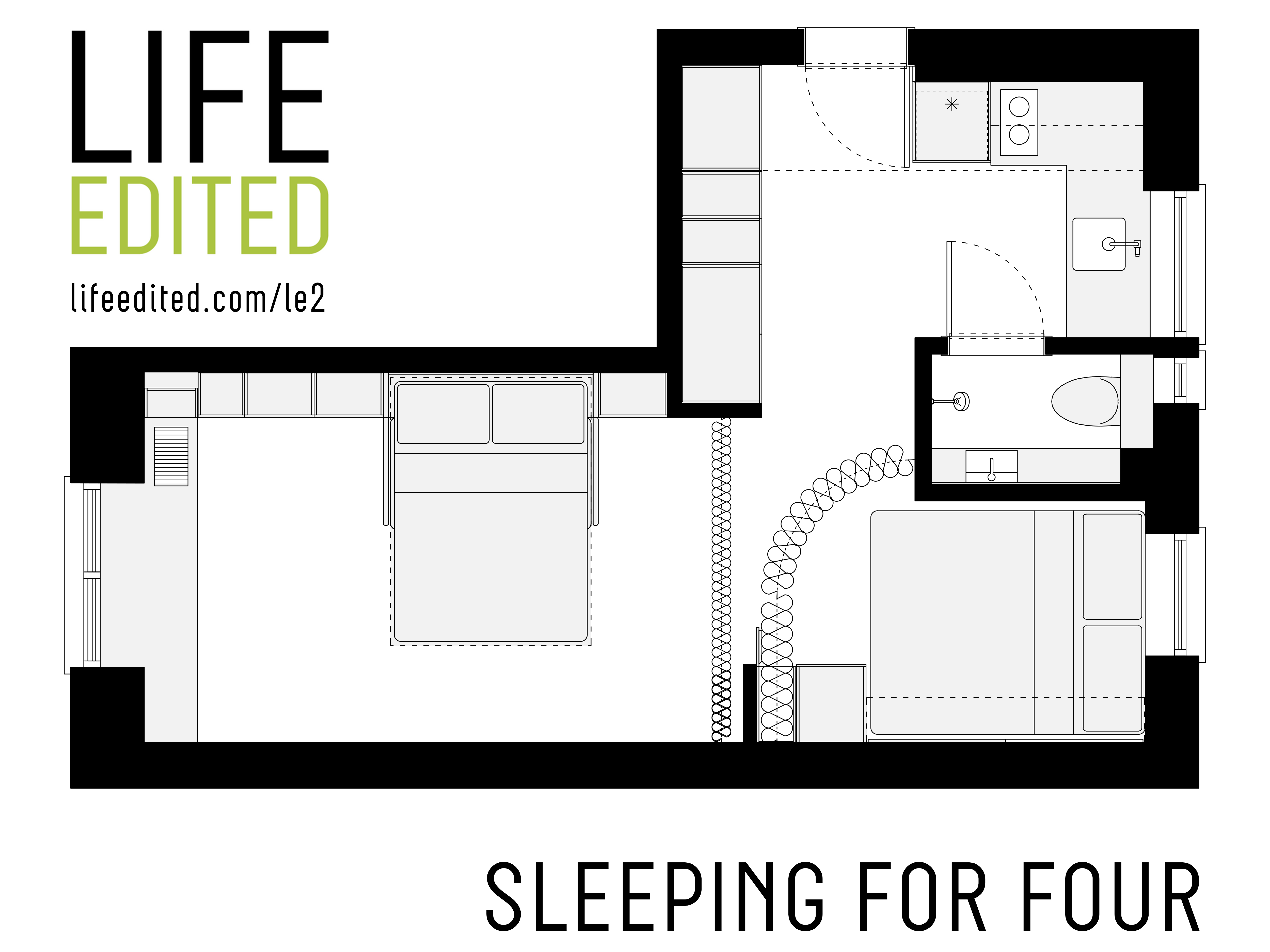 Another plan shows how the space can be configured to host a dinner party for 10 people. 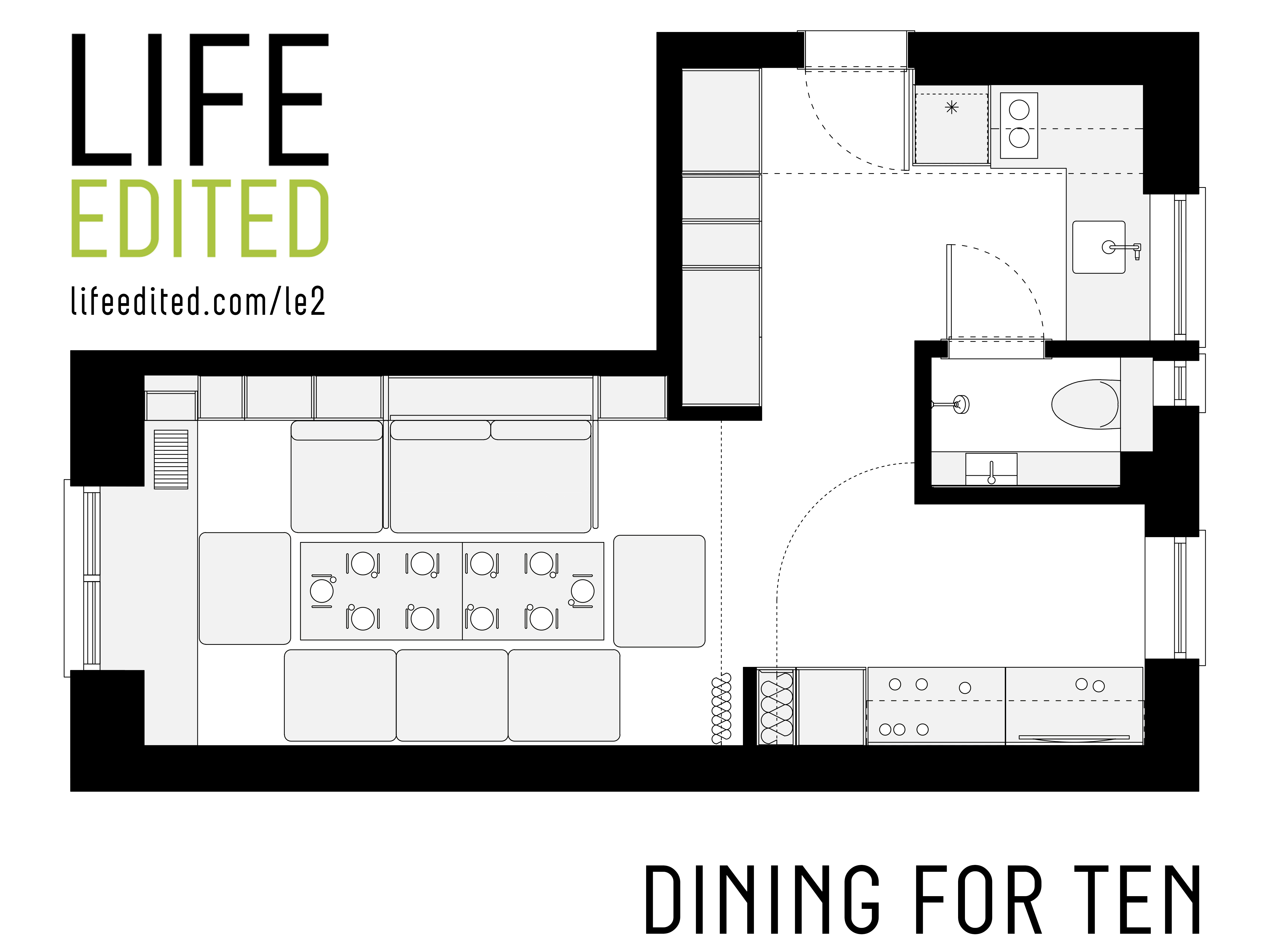 “Every square inch of the apartment is utilised,” Corcoran agent Jerrie Butler said of the studio in the New York Times. “It’s modern but timeless — space-savvy never goes out of style in New York.” 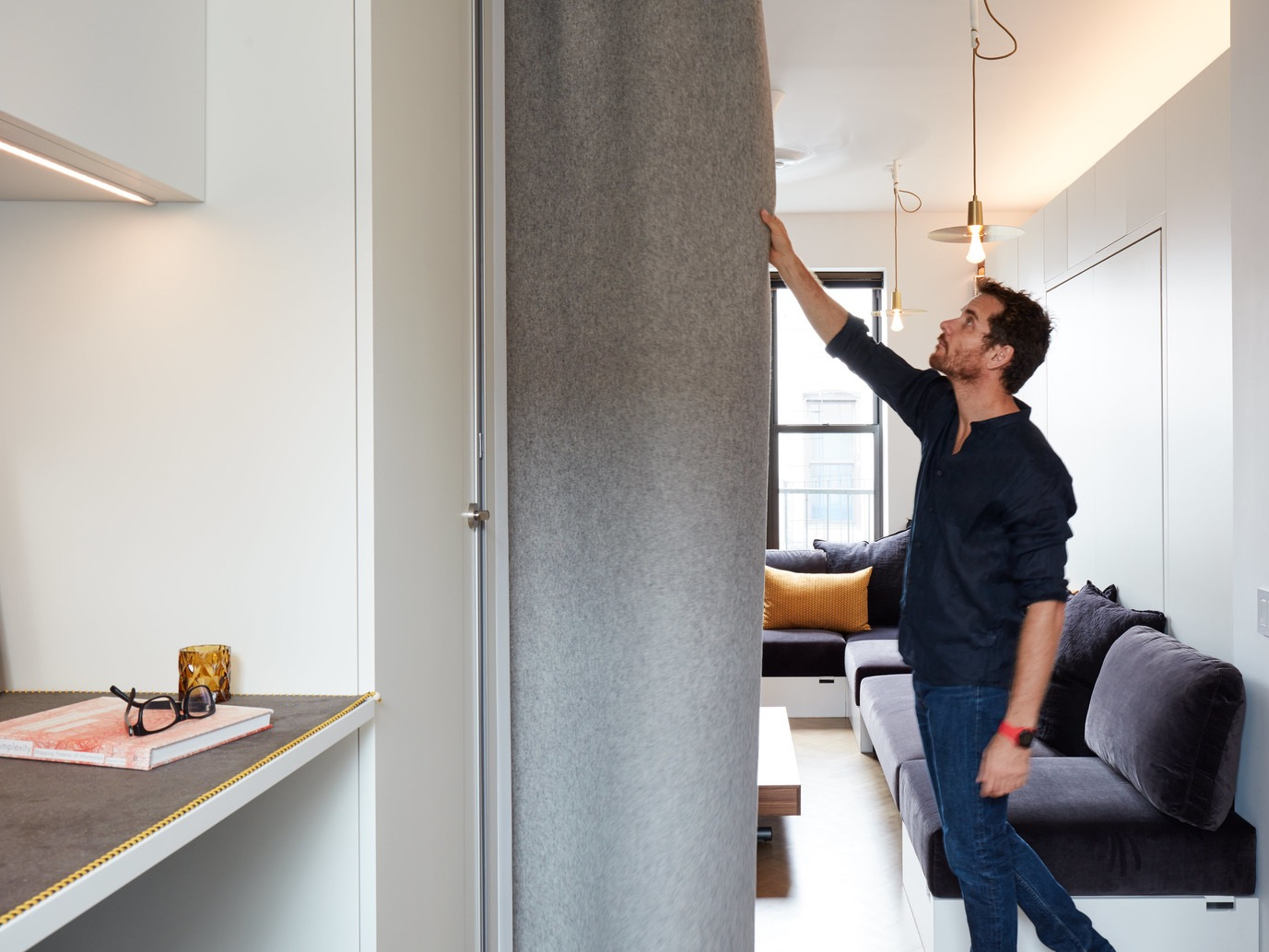