After a year of booming tiny-house sales, experts say the movement is at a turning point 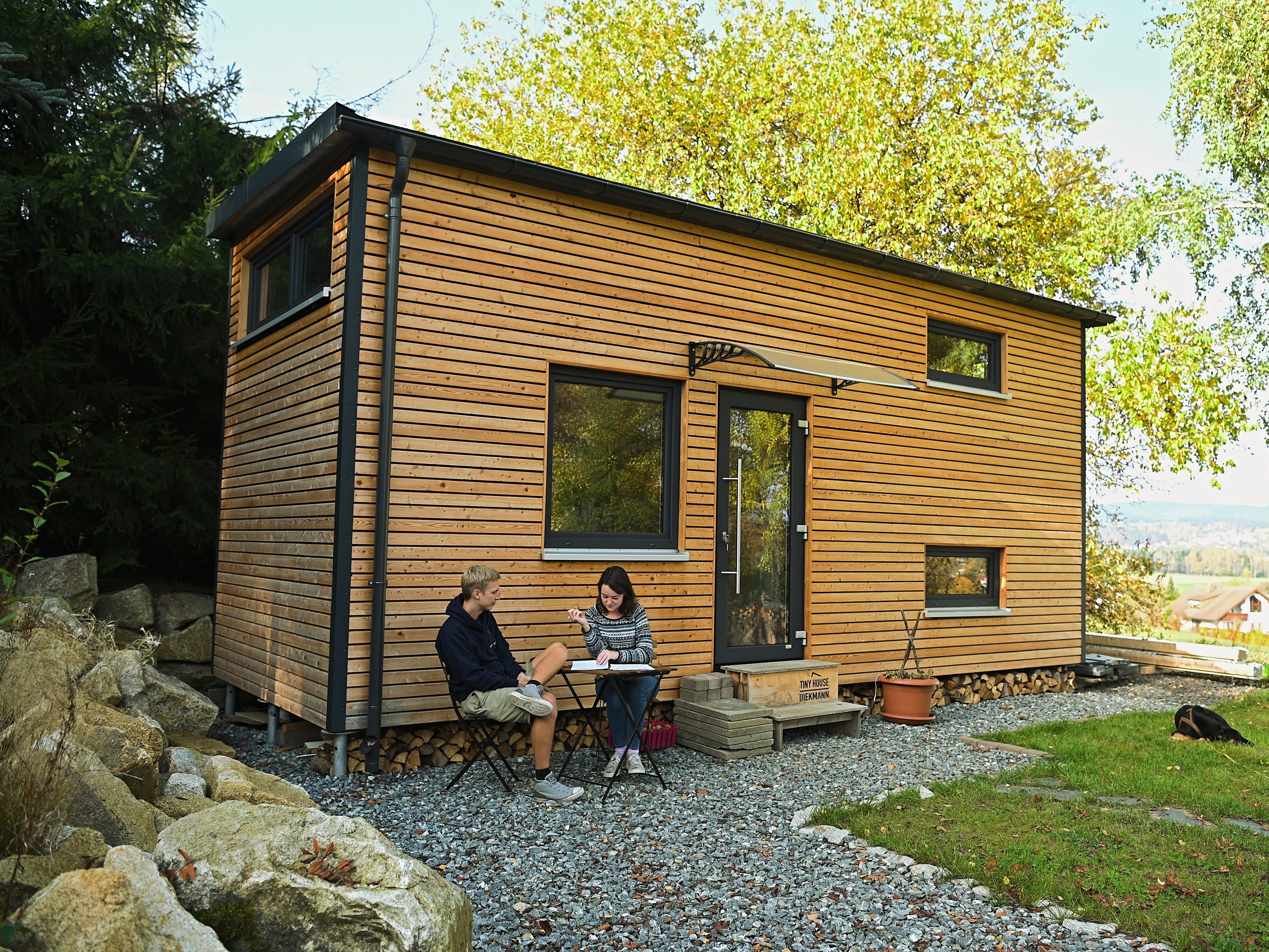 When the coronavirus pandemic swept across the country in 2020, Nick Mosley didn’t know what would happen to his tiny-house construction business.

In March, his business, California Tiny House, was operating out of a 12,000-square-foot warehouse in Fresno, California. Mosley braced for the worst, knowing he wouldn’t be able to market his company at festivals or offer tours for the foreseeable future.

However, rather than see a downturn, Mosley was inundated with emails and phone calls from people inquiring about tiny houses. By December, Mosley had expanded his warehouse to 22,000 square feet and hired four more staff members to meet the demand and to keep his employees safe.

It ended up being a record year for the company, which built 30 tiny houses in 2020 alone. It was a direct impact of the coronavirus, Mosley said, as new groups of people became interested in the growing movement.

“The pandemic created a new need or created a new customer base that may not have been there previously,” he told Insider. “There are a lot of people that need backyard offices so that they can work from home but have separation from their family. There are college students that don’t want to be in dorms because they’re not socially distanced.”

Mosley’s experience reflects how interest in the tiny-house movement reached fever pitch last year. IPX 1031, a financial company, found that 56% of Americans said they would move into a tiny house during the pandemic, and that 86% of first-time buyers would buy a tiny house as their starter home.

Now, as the movement morphs from a growing fad to something bigger, it’s at a critical point. Leaders within the industry told Insider they hope to carry that momentum into 2021 and focus on turning tiny houses into a legitimate form of housing â€” first by defining who the tiny-house movement is for and then by determining how it will benefit the country.

In the eyes of most local governments in the US, tiny houses are considered illegal. There are no building codes for tiny houses, which means they aren’t being built to a certain safety standard. Plus, tiny houses aren’t mentioned in most local zoning codes, so it’s very difficult to find a place to legally park a tiny house in the US.

The Tiny Home Industry Association (THIA) worked closely with local municipalities to legalise tiny houses throughout 2020. The organisation’s main goal is to create a definitive definition for tiny houses so that they can be differentiated from RVs. 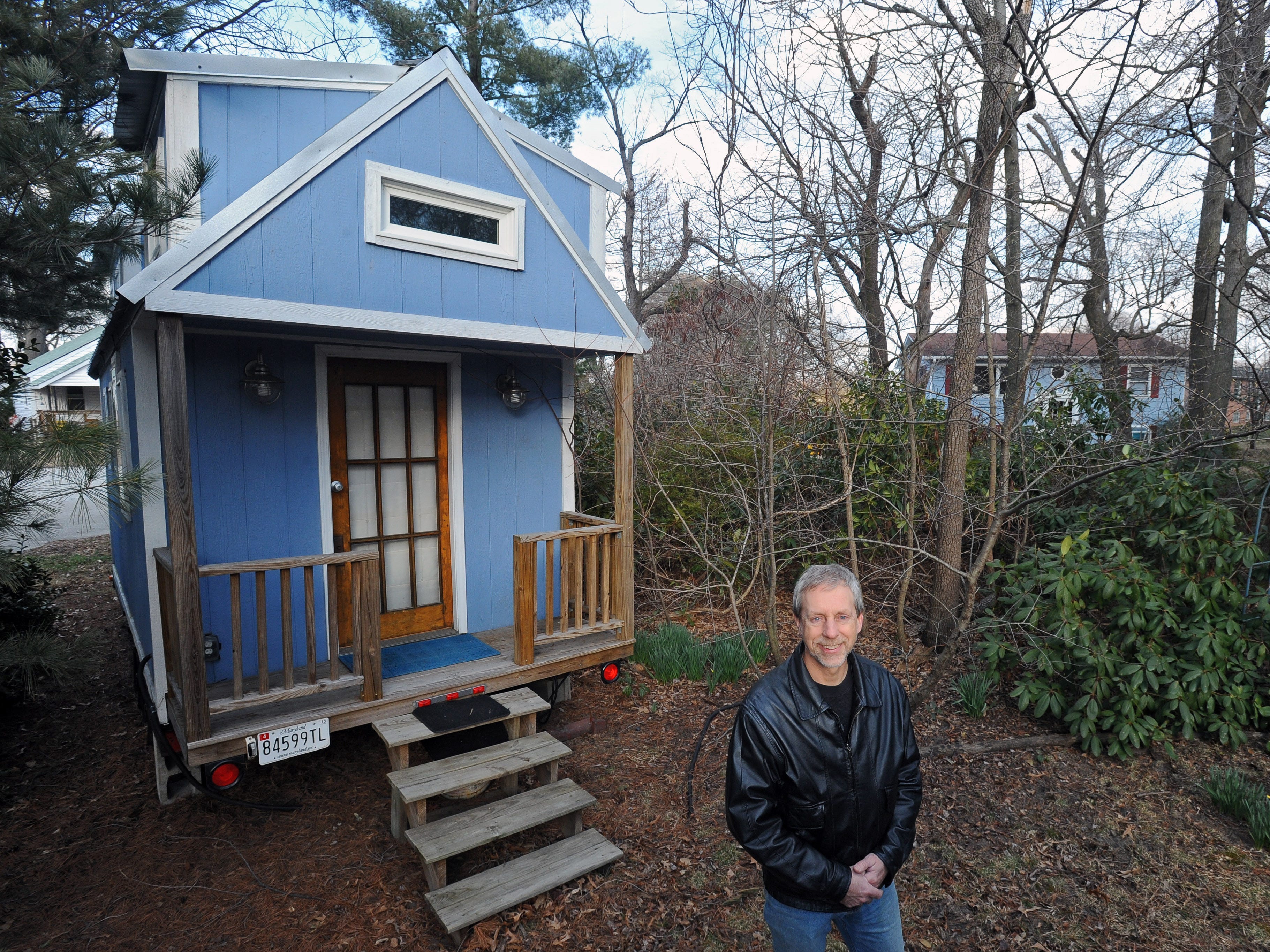 Baltimore Sun / GettyThere’s not a consistent, nation-wide standard for tiny houses or where to park them.

In early 2020, THIA and its president, Dan Fitzpatrick, earned a big win when Los Angeles legalised tiny houses as accessory dwelling units, allowing people to park their movable tiny homes on zoned properties. Since Los Angeles is the second-largest city in the country, Zack Giffin, host of “Tiny House Nation” and vice president of THIA, called it “the biggest thing that has ever happened to the tiny house world” on his Instagram. The ordinance helped spark San Jose and San Diego to follow suit.

“As soon as Los Angeles did it, it basically caught fire in other places because all of a sudden they don’t have to go through that arduous process,” Giffin told Insider. “They can simply look at what Los Angeles did and basically borrow language from their policies, introducing it to their own cities.”

Giffin and Fitzpatrick agreed that the No. 1 goal for the movement now is to continue this success and build on this momentum at the local levels. To do so, some changes must be made so that the movement can transition from “infancy to maturity,” Giffin said.

As the host of “Tiny House Nation,” Giffin said his show perpetuated the idea that tiny houses are the perfect option for families.

“We were constantly putting families in tiny homes, essentially, because it creates better drama,” Giffin said. “It creates better television, right? It’s so much more of a challenge when you have a family with five kids trying to move into a tiny home. Naturally, casting and production is going to prioritise working with those types of stories.”

In hindsight, Giffin said this was a mistake because local governments think this movement is for families, but in reality, tiny houses are better suited for singles and couples with no children, and these groups need more housing options. 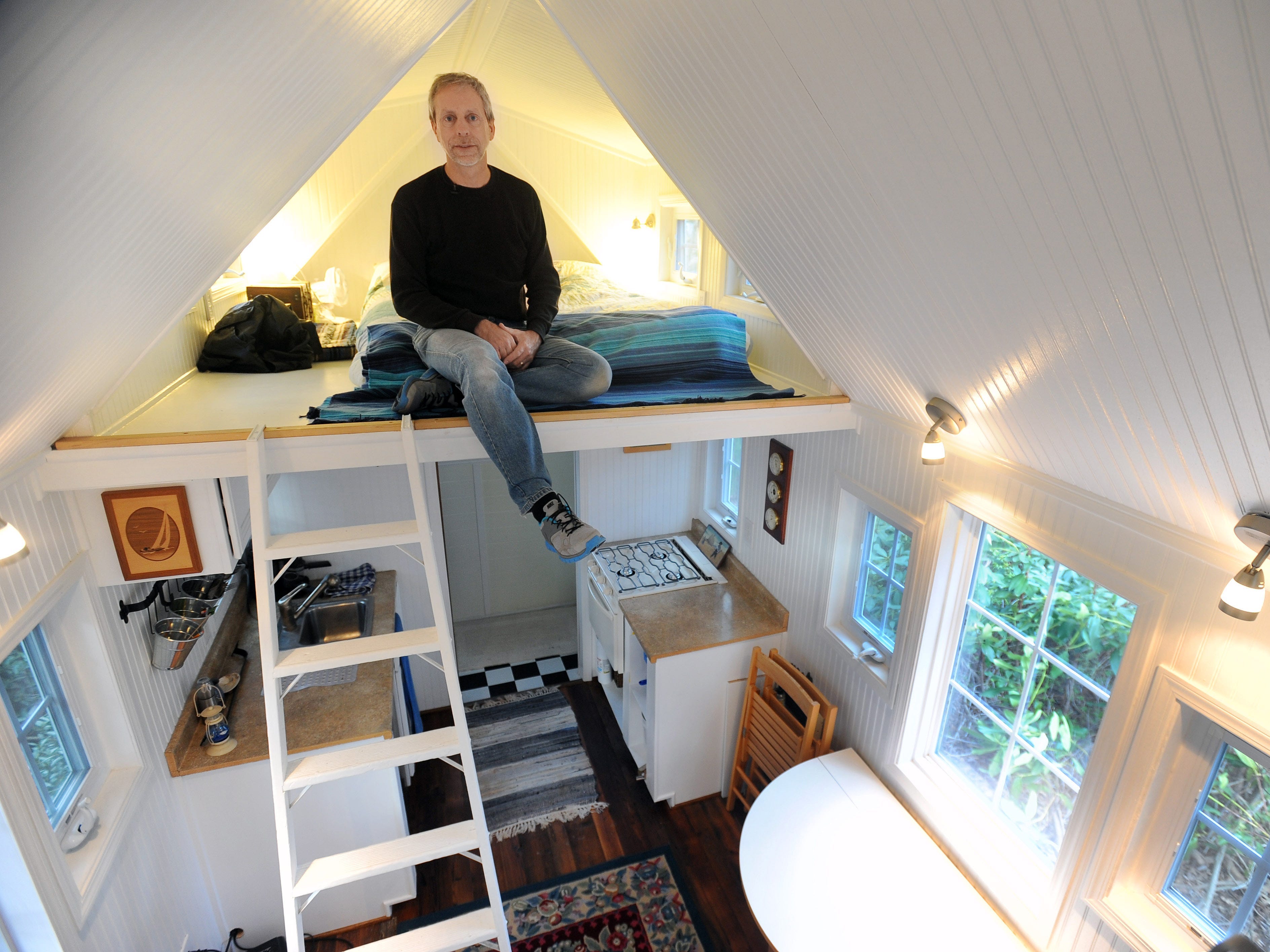 In the US, the largest demographic is single adults who live alone, which makes up 28% of our population, and close to half the population are adults living with other adults without children, according to AARP’s “Making Room: Housing for a Changing America” study. Meanwhile, one-bedrooms and studios make up only 12% of our housing.

Giffin hopes that local governments can recognise tiny houses as a great housing option for singles and retirees to further push the movement toward legalization.

Tiny houses also need to be seen as viable affordable housing in the future, experts say

The US is in the midst of an affordable housing crisis. According to a 2019 Freddie Mac survey, 82% of renters see renting as a more financially reasonable option when compared to owning a home. To break that down further, 72% of middle-class renters said they would not buy a home because the cost of down payment would be too high.

Additionally, it’s difficult for many Americans to buy a home in major cities across the US. In New York City, for example, you need to earn $US103,911 per year to buy a home, according to HSH. In San Francisco, the needed salary goes up to $US199,465 and $US124,823 in San Diego.

Tiny houses, however, are a more affordable housing option, and the movement must highlight that, Giffin said.

Reverend Jeff Obafemi Carr, the founder of the Infinity Fellowship, is in the process of raising $US1 million to build a community of tiny houses as affordable housing options in Nashville, where people need to make at least $US54,648 per year to buy a median-priced home at $US305,800.

“The regular people who have regular jobs can’t even afford to live here,” Obafemi Carr said.

Instead, people will be able to live in a home of their own in Obafemi Carr’s proposed tiny-house community for just $US750 to $US900 per month. 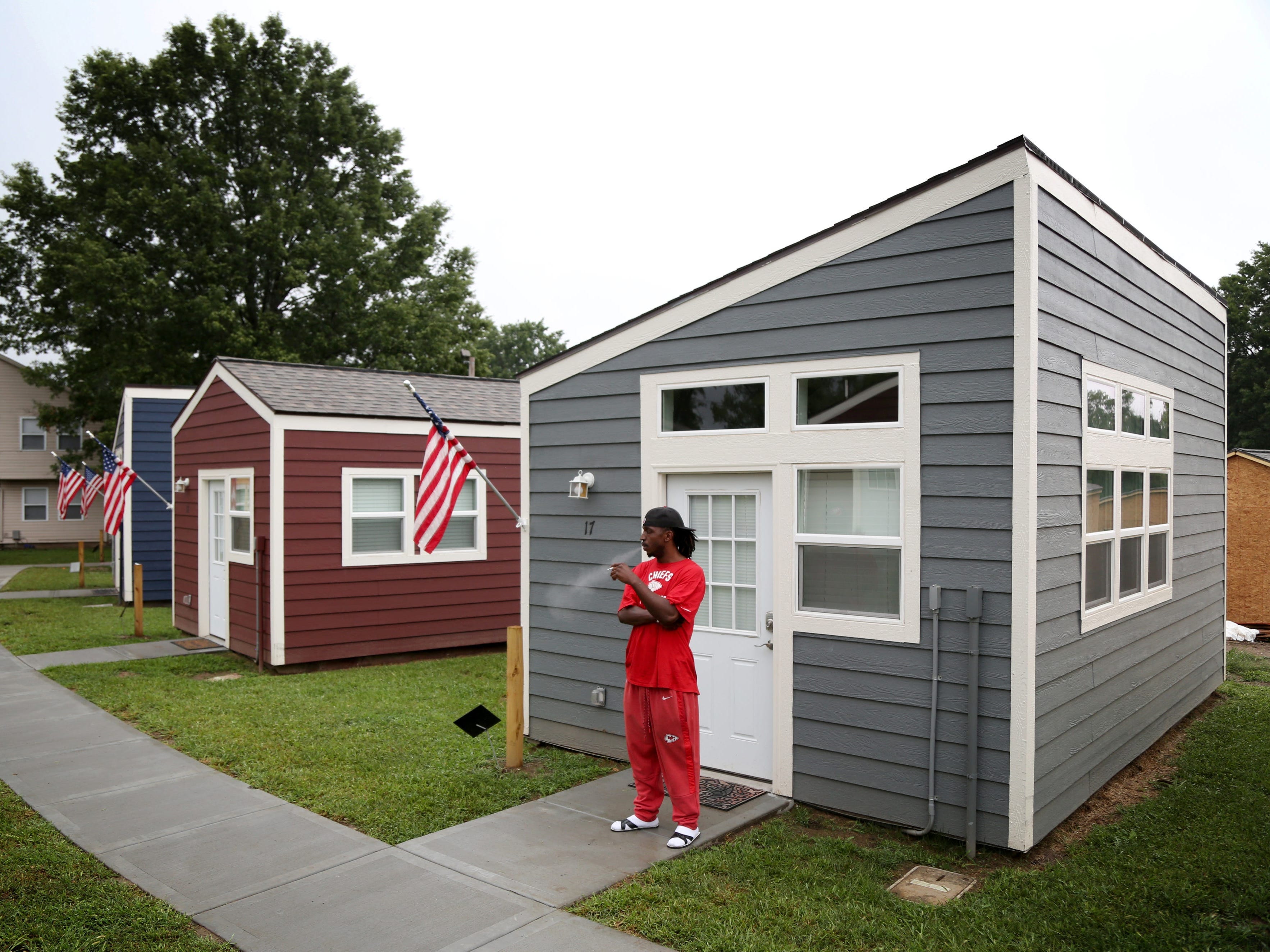 Obafemi Carr saw the value of affordable housing in 2015 when he built six, 60-square-foot tiny houses for $US6,000 each for the homeless. He placed the homes at a church in Nashville, and today, that community has grown to 30 homes.

Like Obafemi Carr, Giffin thinks tiny houses are uniquely poised to solve some of these housing issues. He said if tiny houses are viewed as viable affordable housing options that in turn help underserved communities, the movement will become so much more than just a design fad.

“To me, just breaking down that opposition and also finding a way to create our neighbourhoods with a better spectrum, in essence, is going to help the opportunities of all Americans on the low economic spectrum, and, by and large, that’s definitely people of colour in this country,” Giffin said.

In 2020, like tiny houses, RVs and camper vans boomed in popularity. Much like California Tiny House, camper van companies saw an increase in sales this year, as people looked for new, interesting, and safe ways to travel during the pandemic.

The people who moved into these vehicles full-time call their new homes tiny houses and themselves tiny house owners. Giffin said this is dangerous for the future of the traditional tiny-house movement, which mainly consists of houses built on trailers and wheels. He said traditional tiny houses must distance themselves from RVs and camper vans if they want to achieve their goal of widespread legalization of tiny houses.

“I do believe that for the purpose of gaining legal traction, there does need to be a difference,” Giffin said. “If we start advocating for RVs and all the different forms, like modified school buses and stuff to be used as permanent housing, it’s just a battle that I know I’m going to lose.”

“There are 89,000 municipalities in the US, and I’ve spent most of my career working for government entities, and I do not see them legalizing conventional RVs for permanent living,” he said. “They want something more substantial than that.” 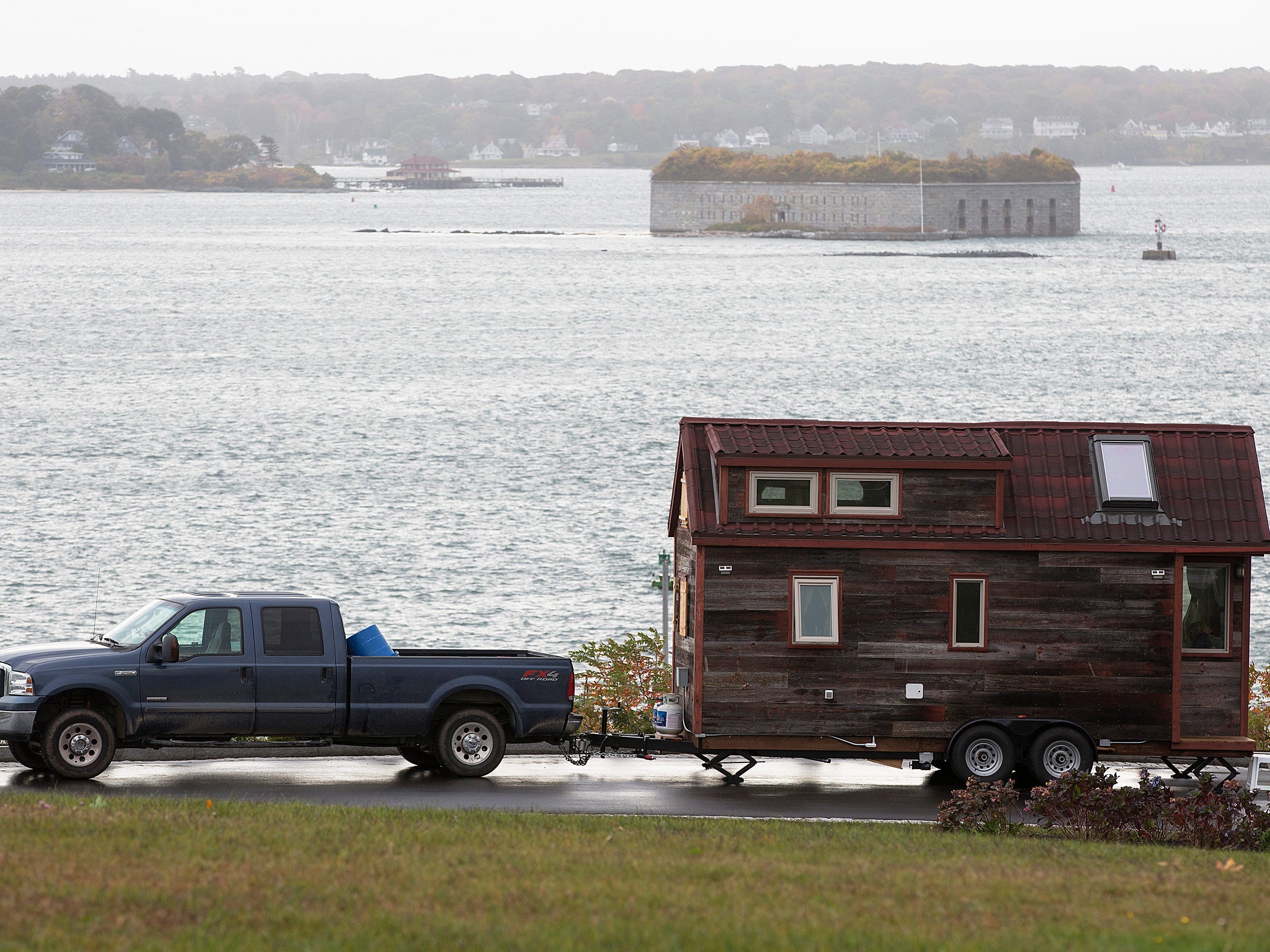 But Jen Young, the chief marketing officer and co-founder of Outdoorsy, which specialises in RV and camper van rentals, said this way of thinking can be even more harmful for the larger tiny-house movement. She said RVs and camper vans don’t stand in the way of legalizing traditional tiny houses.

“They’re complementary,” Young said. “Both sides are trying to solve the same challenges. I think the groups should work together to solve the macro challenges that both tiny homes and RVs are facing.”

As the tiny-house movement goes through its growing pains, leaders of this community will have to answer some tough questions about its identity.

“[The tiny-house movement has] got nothing to do with it being a fad,” Giffin said. “It’s got everything to do with providing solutions where hardly anybody else is actually offering any ideas.”