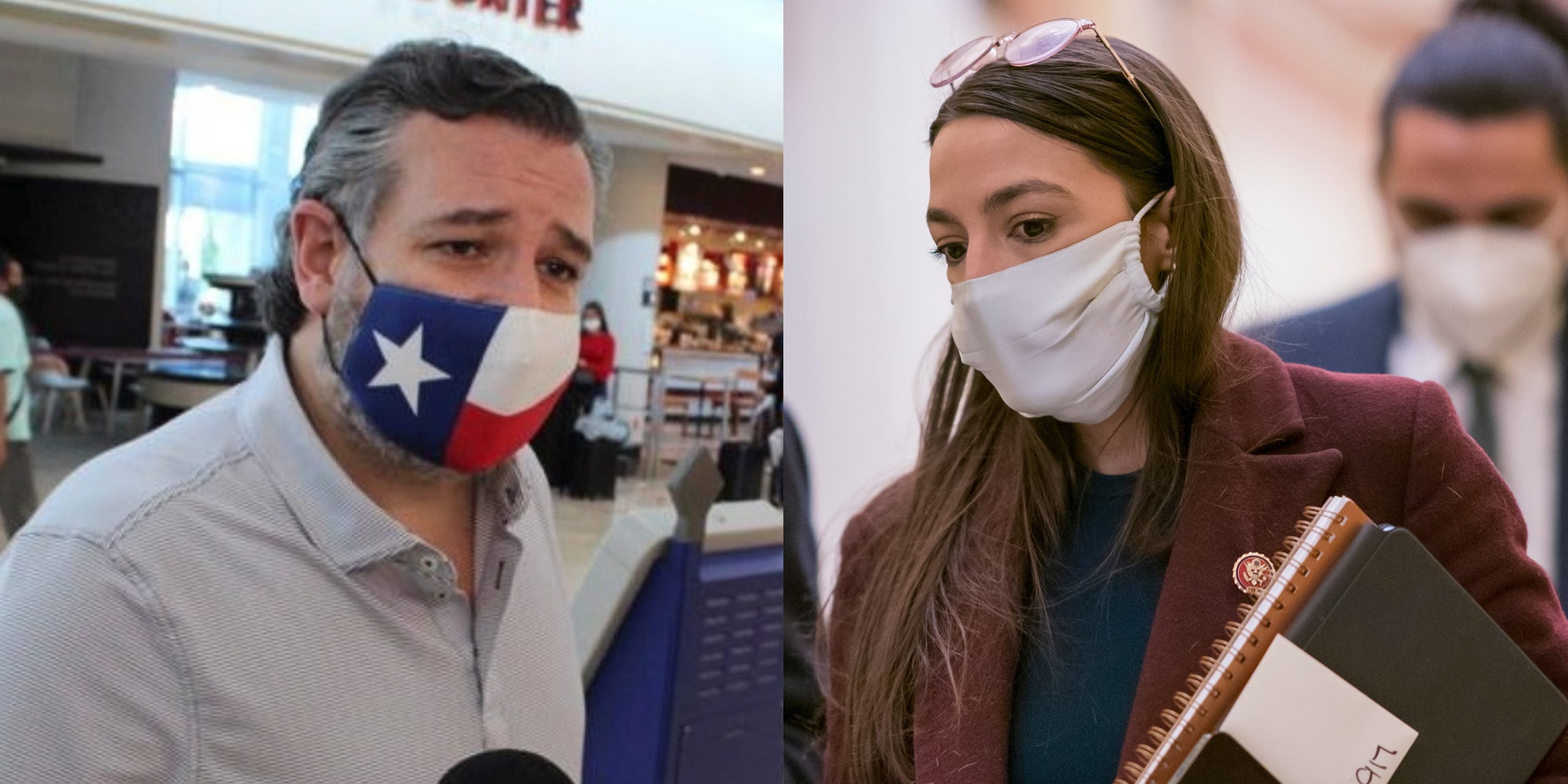 This week, Sen. Ted Cruz of Texas escaped the cold weather ravaging his home state for a trip to CancÃºn with his family, then swiftly returned amid a backlash that he’s struggled to deflate.

The political rivals, who often publicly tussle over their opposing views, were again at odds this week in their responses to the severe winter storm devastating Cruz’s home state. Cruz, embroiled in criticism and scandal, took political heat, whereas Ocasio-Cortez promoted her flagship energy bill the Green New Deal and scored political points.

The freezing temperatures that hit the second-largest state in the country over the past week left millions of households without electricity, drinking water and heat for days. As of Friday afternoon, roughly 180,000 Texans are still without power.

Here’s how both of the politicians reacted to the storm over the past week.

February 13-15: Cruz tweets resources on the storm and tells Texans to ‘be safe’ 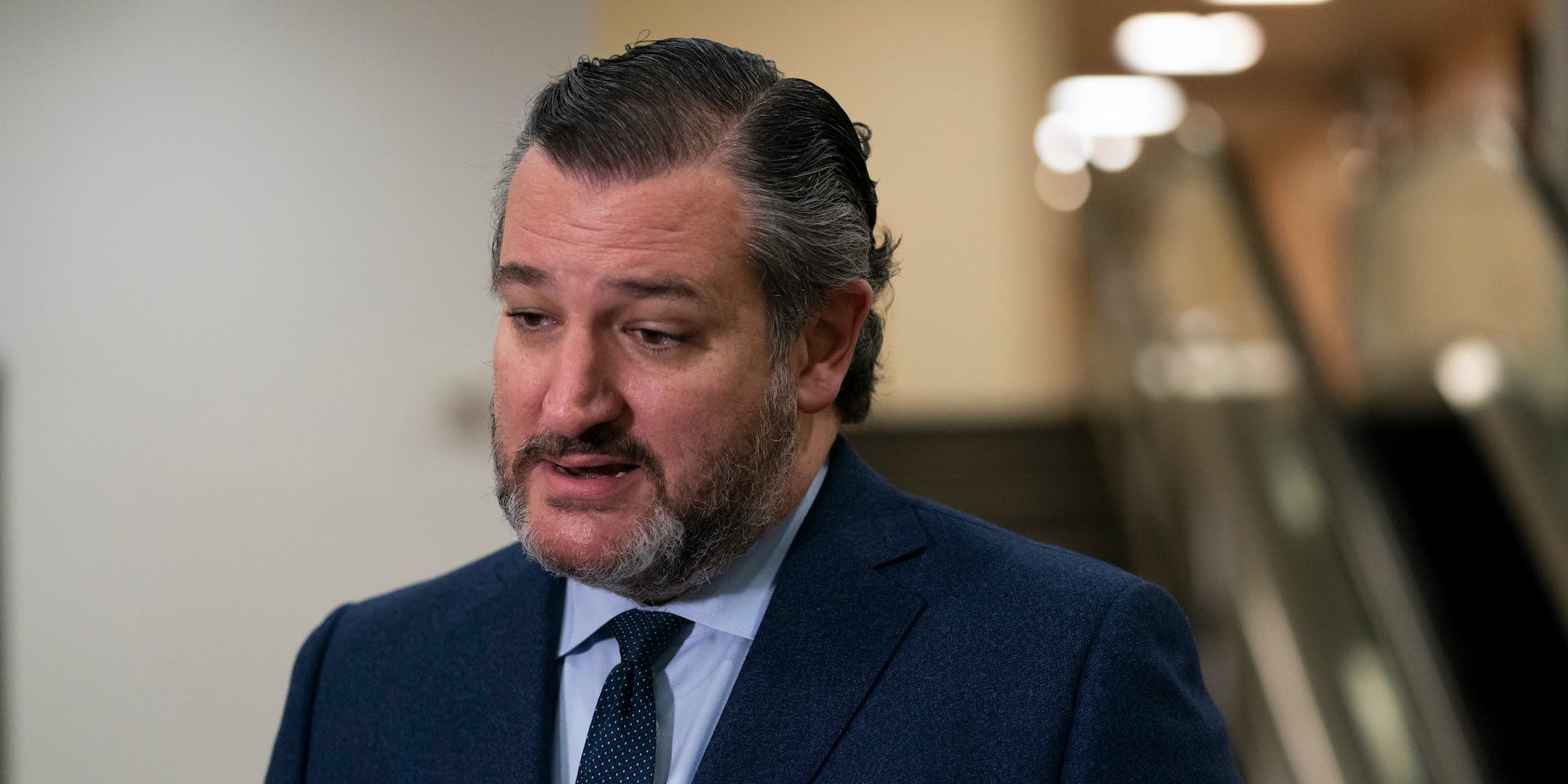 As snowfall increased and temperatures dipped further in Texas, the state’s junior senator started to spread information about the storm, including a call to “just stay home.”

On February 13, Cruz had still been on Capitol Hill busy with the final day of former President Donald Trump’s impeachment trial. But he toldTexans to “please heed all of the winter weather advisories and updates from state and local officials” on Twitter.

The next day, Cruz sent several more tweets with weather advisories and resources to cope with the severe weather.

“This storm is very dangerous,” he wrote on February 14. “Please be careful and be safe.”

Cruz appeared on a local radio station on Monday, saying “our house is lucky” since their power hadn’t cut.

“If you can stay home, don’t go out on the roads. Don’t risk the ice,” Cruz said. “Keep your families safe and just stay home and hug your kids.” 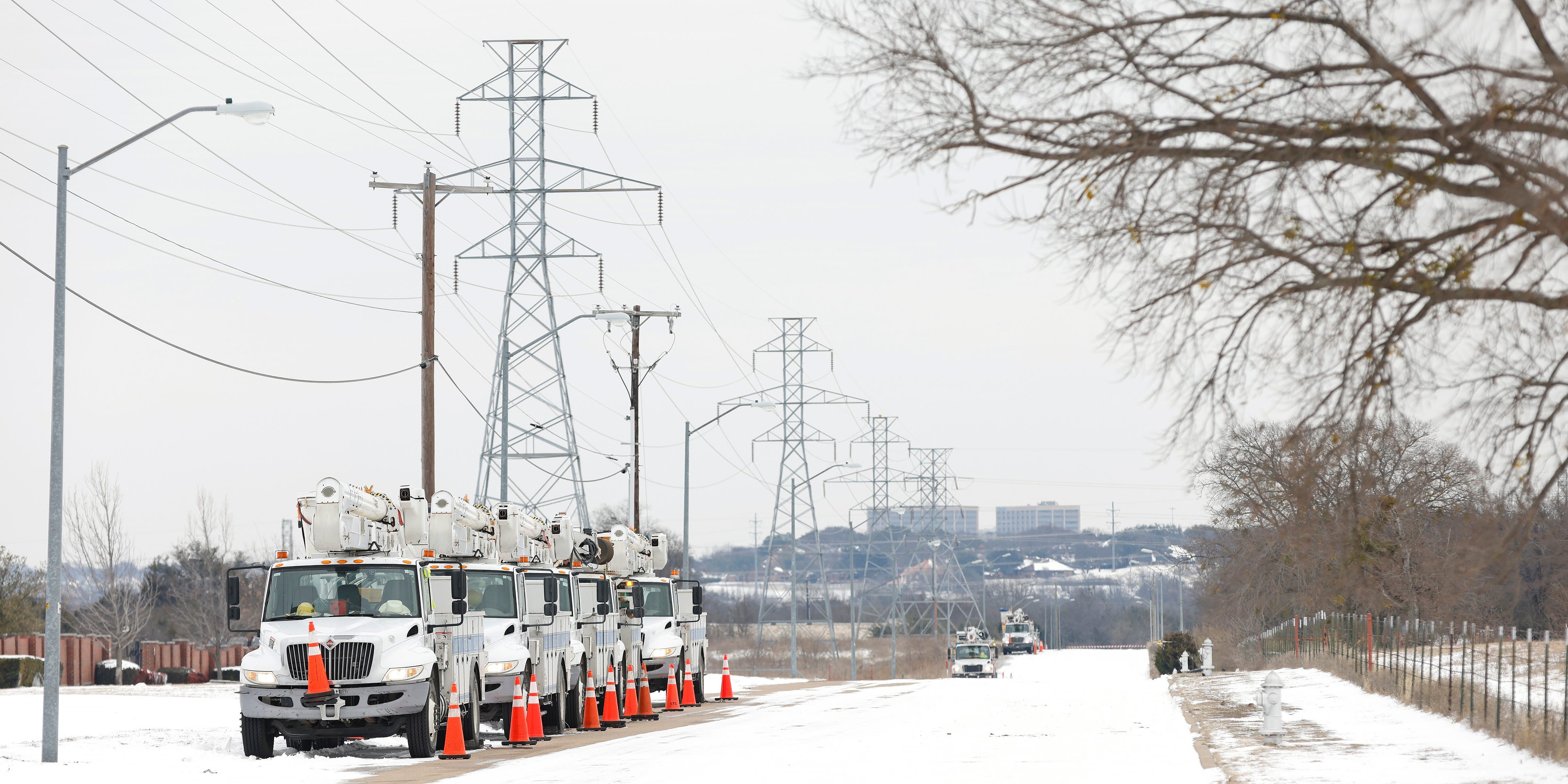 Ron Jenkins/Getty ImagesPike Electric service trucks line up after a snow storm on February 16, 2021 in Fort Worth, Texas.

On Tuesday, Cruz continued to send tips and information on the storm, yet users instead became distracted by a 6-month-old tweet of his, in which he targeted California and Ocasio-Cortez.

“California is now unable to perform even basic functions of civilisation, like having reliable electricity,” Cruz wrote in August 2020 in response to power outages that hit the state during extreme heat and wildfires that summer. “Biden/Harris/AOC want to make CA’s failed energy policy the standard nationwide.”

“I got no defence,” Cruz responded to the backlash that night. “A blizzard strikes Texas & our state shuts down. Not good.”

At the same time, Ocasio-Cortez began to weigh in on Texas’ overwhelmed power grid after Gov. Greg Abbott blamed the blackouts occuring in the major fossil fuel-producing-state on renewable energy sources.

“This shows how the Green New Deal would be a deadly deal,” Abbott said of the New York representative’s energy proposal.

Ocasio-Cortez hit back: “The real ‘deadly deal’ is his failed leadership.” 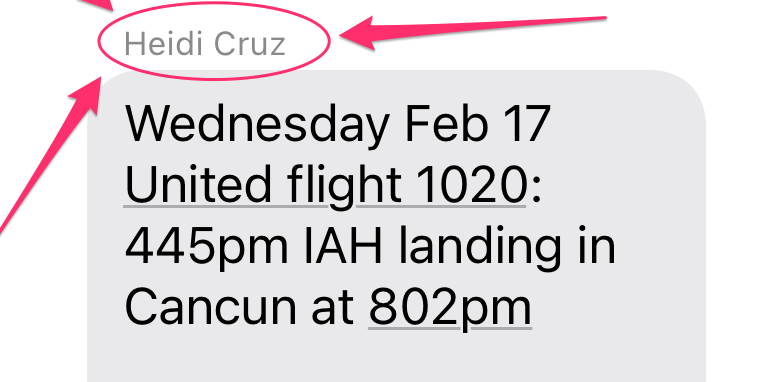 On Wednesday, roughly 2.7 million households in Texas were still without power. The state’s food supply chain dwindled as people scrambled to stock up on groceries. More than 2,300 flights into or out of the US were cancelled.

Yet that night, unverified photos of Cruz at the airport and onboard a plane to Cancún exploded on social media.

Insider, along with many other news organisations, tried to reach Cruz for confirmation if he had indeed left Houston for a vacation at the Mexican resort city, which the widely-circulated images suggested.

Just confirmed @SenTedCruz and his family flew to Cancun tonight for a few days at a resort they've visited before. Cruz seems to believe there isn't much for him to do in Texas for the millions of fellow Texans who remain without electricity/water and are literally freezing. pic.twitter.com/6nPiVWtdxe

Yet Cruz was silent – and critics piled on him for apparently abandoning the state while it suffers.

On the other hand, Ocasio-Cortez doubled down her criticism of Texas’ governor, and promoted her Green New Deal legislation.

“No one should be left to fend for themselves in a natural disaster,” she tweeted. “This is why we insist on justice in climate policy. In a modern society, equity is as important as technology.

“We must modernise,” she added, with the hashtag #GND.

February 18: Cruz returns to Texas, AOC calls him out and launches fundraiser

Stringer/ReutersSen. Ted Cruz carries his luggage at the Cancun International Airport before boarding his plane back to the U.S., February 18.

Reports on Cruz’s vacation poured in Thursday morning, and the senator was fiercely rebuked.

His former Democratic challenger Beto O’Rourke slammed him for “vacationing in Cancun right now when people are literally freezing to death in the state that he was elected to represent and serve.”

“If Sen. Cruz had resigned back in January after helping gin up a violent insurrection that killed several people, he could’ve taken his vacation in peace,” she said. “Texans should continue to demand his resignation.”

Cruz didn’t confirm the trip himself until the afternoon.

“With school cancelled for the week, our girls asked to take a trip with friends,” Cruz said in a statement. “Wanting to be a good dad, I flew down with them last night and am flying back this afternoon.”

Cruz added that his home power had gone out and his children suggested they get out of town.

But criticism of Cruz’s travels continued upon his arrival back home. “It was obviously a mistake,” a flustered Cruz told reporters. “In hindsight, I wouldn’t have done it. I was trying to be a dad.”

Yet Cruz’s story unravelled as text messages from his wife Heidi apparently showed her planning the getaway with their neighbours to escape the cold.

Meanwhile, Ocasio-Cortez launched a fundraising effort to send relief to Texans struggling during the storm.

February 19: Cruz reacts to the controversy, AOC raises millions and goes to Texas to distribute supplies 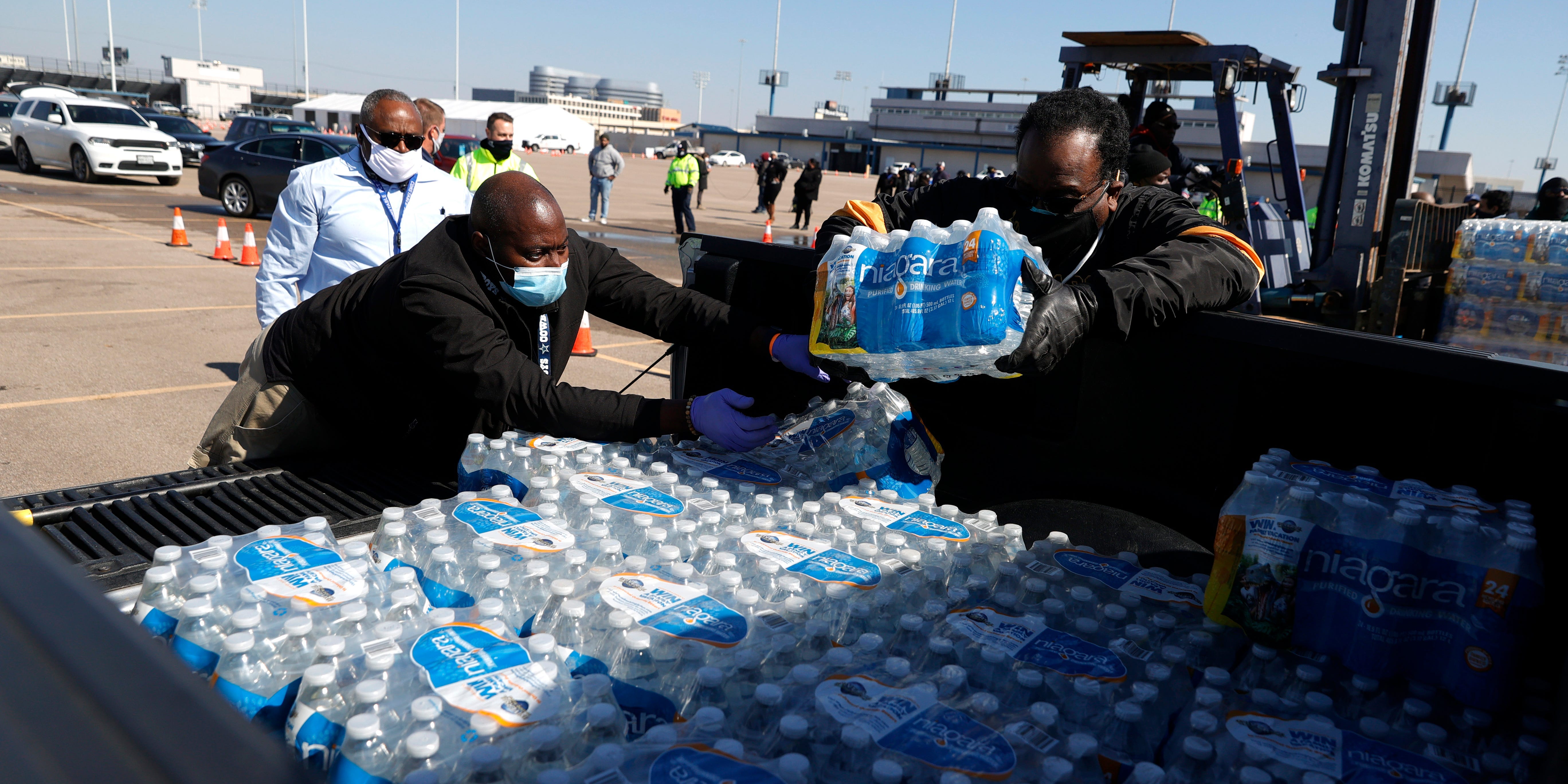 Justin Sullivan/Getty ImagesVolunteers load cases of water into the bed of a truck during a mass water distribution at Delmar Stadium on February 19, 2021.

By Friday, Cruz tried to smooth over the controversy.

He attempted to return attention to the storm in Texas, which he started to tweet information about again.

Cruz’s political rival, Ocasio-Cortez, announced on Friday that she raised $US2 million in direct relief for struggling Texans.

“100% of this relief is going straight to Texan food assistance, homelessness relief, elder care, and more,” she added.

The progressive Democrat noted that she’s headed to Texas for the weekend to help distribute supplies and raise awareness of the situation.

Since Sunday, the deep freeze has killed at least 30 people in Texas, according to data compiled by The Washington Post.