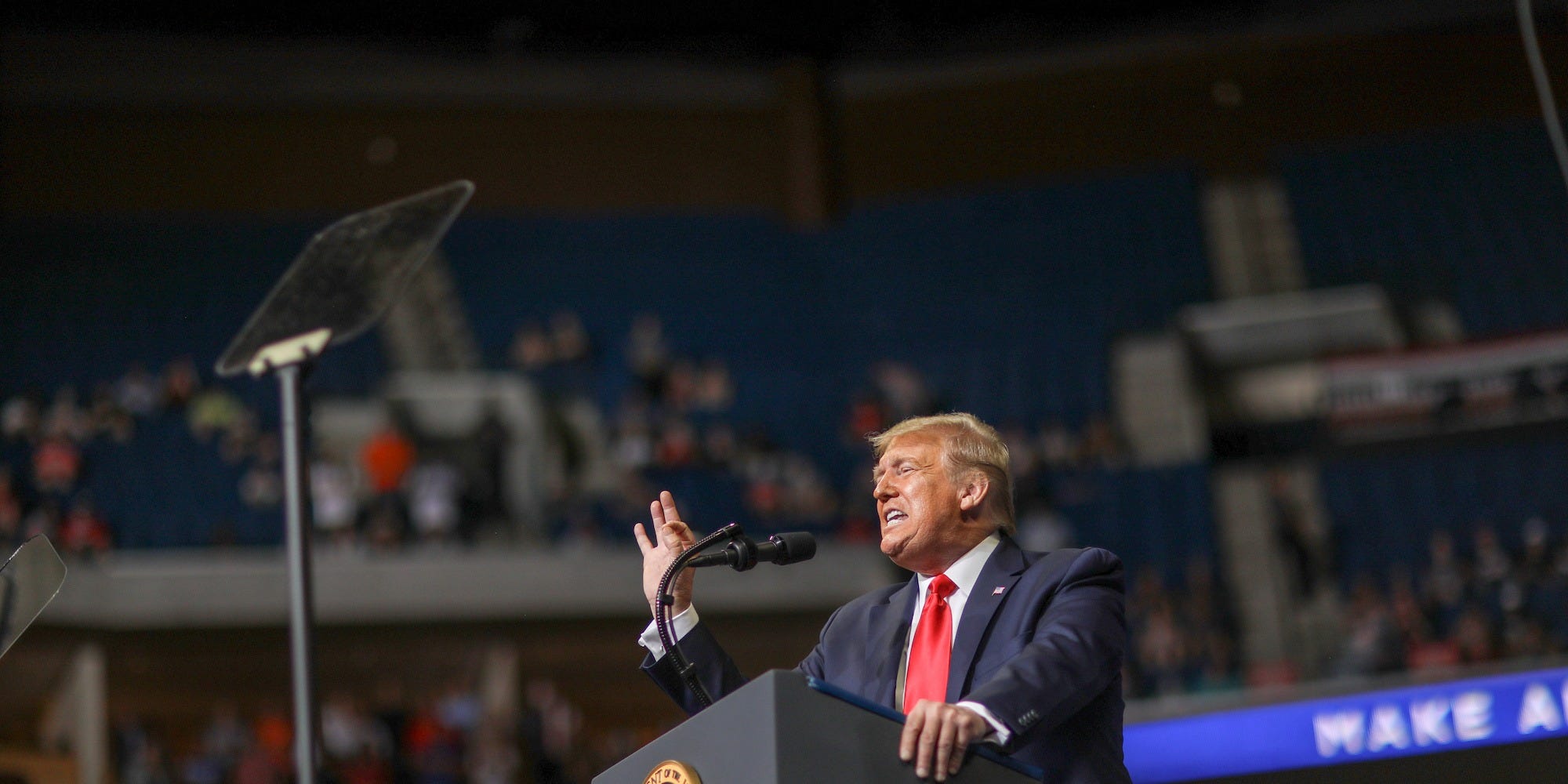 REUTERS/Leah MillisPresident Donald Trump speaks at a campaign rally at the BOK Centre in Tulsa, Oklahoma, on Saturday.

President Donald Trump’s rally on Saturday in Tulsa, Oklahoma, was billed as his big comeback from the crises that have beset his administration in recent months.

But instead of a packed 19,000-seat stadium of cheering supporters, the president was greeted on Saturday night by the sight of rows of empty seats.

Attendance was so low that the president had to scrap plans to make a speech outside the venue, where the crowds of supporters who couldn’t get into the stadium that the campaign expected failed to show up.

On Twitter, Trump’s campaign manager, Brad Parscale, blamed “radical protestors, fuelled by a week of apocalyptic media coverage,” claiming they stopped Trump supporters from getting into the venue. But reporters there said the protests were small.

No this is why https://t.co/fFVCigssZ4

This is what happened tonight. I’m dead serious when I say this. The teens of America have struck a savage blow against @realDonaldTrump. All across America teens ordered tickets to this event. The fools on the campaign bragged about a million tickets. lol. @ProjectLincoln.

But part of the reason for the poor showing may be a campaign that swept social-media platforms such as TikTok, Instagram, and Twitter. Teenagers said they reserved tickets for the rally in large numbers – with no plans to actually show up.

Also key to that campaign, The New York Times reported, is the huge online network of fans of Korean pop music, or K-pop. In recent months they have pivoted to supporting political causes, such as swamping right-wing hashtags and raising money for the Black Lives Matter movement.

The Trump campaign had asked supporters to sign up for a free ticket to the rally using their mobile phone number, and K-pop fan accounts urged people to do so to prank the campaign.

Mary Jo Laupp, a 51-year-old living in Fort Dodge, Iowa, also played a key role in rallying support for the prank, The Times reported. In a TikTok video that racked up hundreds of thousands of likes, she urged people to take part.

Laupp told CNN last week that Trump’s initial decision to stage the rally on Juneteenth, the holiday marking the end of slavery in the US, inspired her to act.

A meme spread on TikTok of users dancing to the “Macarena” in front of a picture of their reservation for Trump’s rally.

Parents on Twitter shared stories of their kids taking part in the campaign.

i have three teenagers. two of them have a pair of tix each to @realDonaldTrump’s rally in tulsa; they registered to spoof POTUS & his campaign. one of them is sitting at dinner now, laughing and saying teens around the united states fooled the man. https://t.co/akLU9o8u3f

“The teens of America have struck a savage blow against @realDonaldTrump,” the Republican strategist Steve Schmidt tweeted. “All across America teens ordered tickets to this event. The fools on the campaign bragged about a million tickets. lol.”

Parscale had bragged about a huge expected turnout, tweeting on June 14 that the event was the “biggest data haul and rally signup of all time by 10x.” The campaign uses data like phone numbers used to sign up for tickets to target ads to supporters.

But videos and comments on social media provided tips on registering for the tickets with separate mobile numbers to avoid being spammed by the campaign, The Times reported.

We may never know to what extent the viral campaign was responsible for the Trump rally flop on Saturday – other factors could include the health risks of attending a large event during the coronavirus pandemic. But it seems likely that a lot of that data haul that Parscale boasted of won’t be particularly useful to the Trump campaign.