TikTok, the video-sharing phenomenon seemingly adored by teens everywhere, has rapidly become one of the most popular apps in the UK.

According to data from App Annie, a mobile data and analytics platform, TikTok was the UK’s fifth most downloaded app in 2019, ahead of online giants like Spotify, Snapchat and Facebook. New estimates from eMarketer suggest the app will surpass 10 million British users by the end of 2021.

In September, celebrating the company’s one-year anniversary in the UK, TikTok revealed “pets”, “sports” and “comedy” were the country’s most popular content categories. 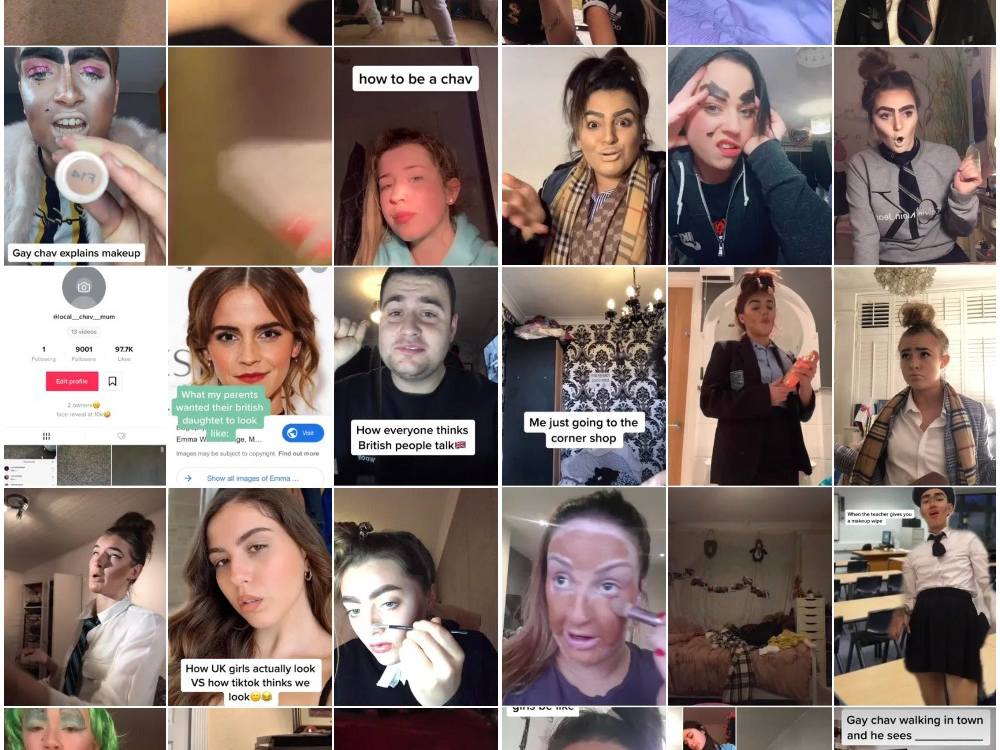 For the better part of a decade, starting in the mid-2000s, much of Britain’s political discourse revolved around whether it was acceptable to describe poor people as chavs.

As defined by the Oxford Dictionary, a chav is “a young person from the working-class, usually without a high level of education, who typically behaves in a loud and annoying way and wears designer clothes”. Almost any British person would understand the term.

Writing in The Times, one columnist called the term a form of “social racism”. Prominent left-leaning journalist and activist Owen Jones used it as the title of his debut book, decrying the “demonization of the working class”. There is a longstanding tradition of playing chavs for laughs in the UK. In 2005, two of the country’s most popular TV comedies, “Little Britain” and “The Catherine Tate Show”, featured characters written as teenage girls, always seen in sports gear, who regularly suffered unwanted pregnancies, violence and multiple run-ins with the law.

In the same year, more than a decade before he would become Prime Minister, Boris Johnson described the bottom fifth of British people as “chavs, losers, burglars [and] drug addicts”.

The term appeared to have fallen out of fashion in the UK.

Over the past two years, videos captioned with the hashtags #chav or #chavs have racked up more than 150 million views between them. #BritishChavs, #UKChavs and #SchoolChavs have been watched by another 12 million. 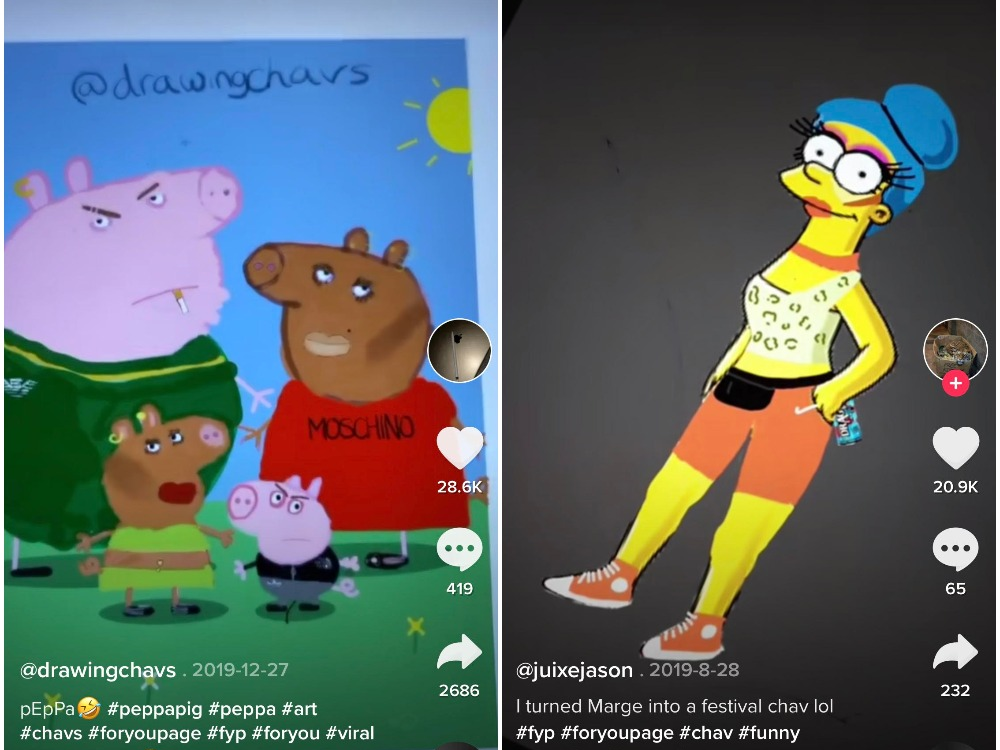 In these videos, “chavvy” girls are regularly mocked for wearing too much make-up, while those who either eat or work in McDonald’s are considered fair game for abuse.

Some, including one account with the moniker @drawingchavs, specialise in reimagining well-known cartoons like “SpongeBob SquarePants” or “The Simpsons” as chavs, adding earrings, sneakers and even altering their ethnicity. It isn’t clear who is behind the account, but it has racked up more than 3,000 followers.

But perhaps the biggest proponents – and beneficiaries – of Britain’s newly digitised obsession with class are The TikTok Chavs.

In November, the entourage, all aged 18-21, uploaded their first video: a riff on the “Git Up” challenge, in which people dance to the song of the same name by American singer-songwriter Blanco Brown. 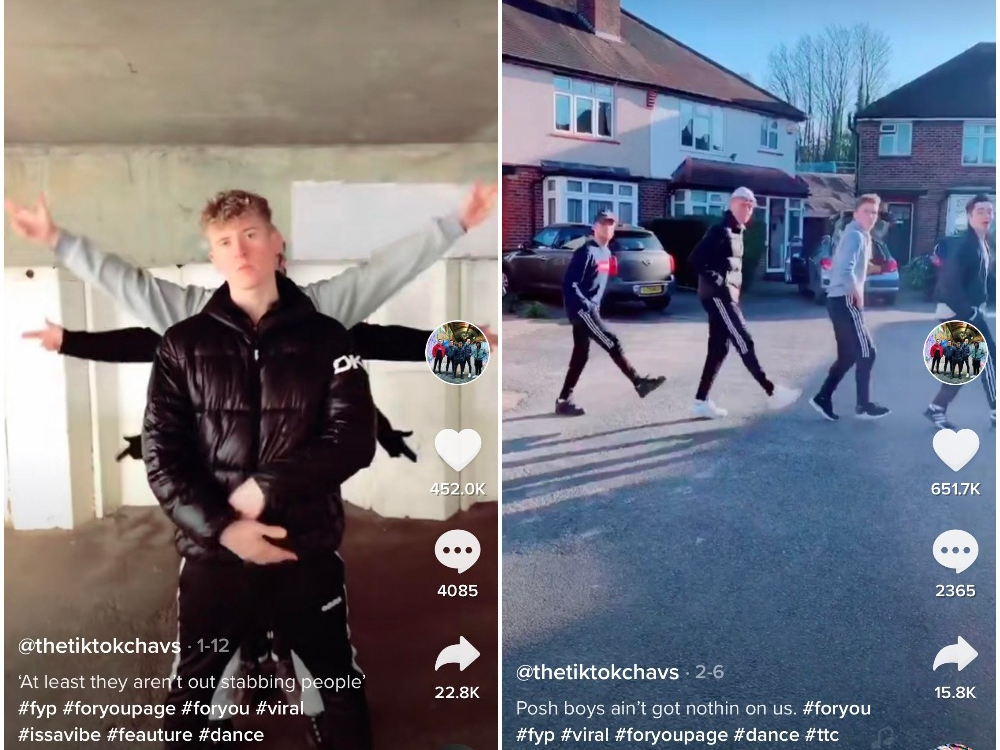 In the Chavs’ version, the boys stand at the side of the road in a rundown part of town, their hoods up and baseball caps swiveled back, before breaking out into a tightly choreographed bop. The clip of (what appeared to be) five British delinquents joyously jiving to country rap racked up hundreds of thousands of clicks.

In the months since, the troupe’s backlog of videos – one captioned “At least they aren’t out stabbing people” is particularly popular – has received over 20 million views.

The TikTok Chavs account has more than 300,000 followers at the time of writing.

At least three of the group’s core line-up currently attend Laine Theatre Arts, an independent dance and drama college in the leafy town of Epsom, where students pay approximately $US23,000 a year in tuition. 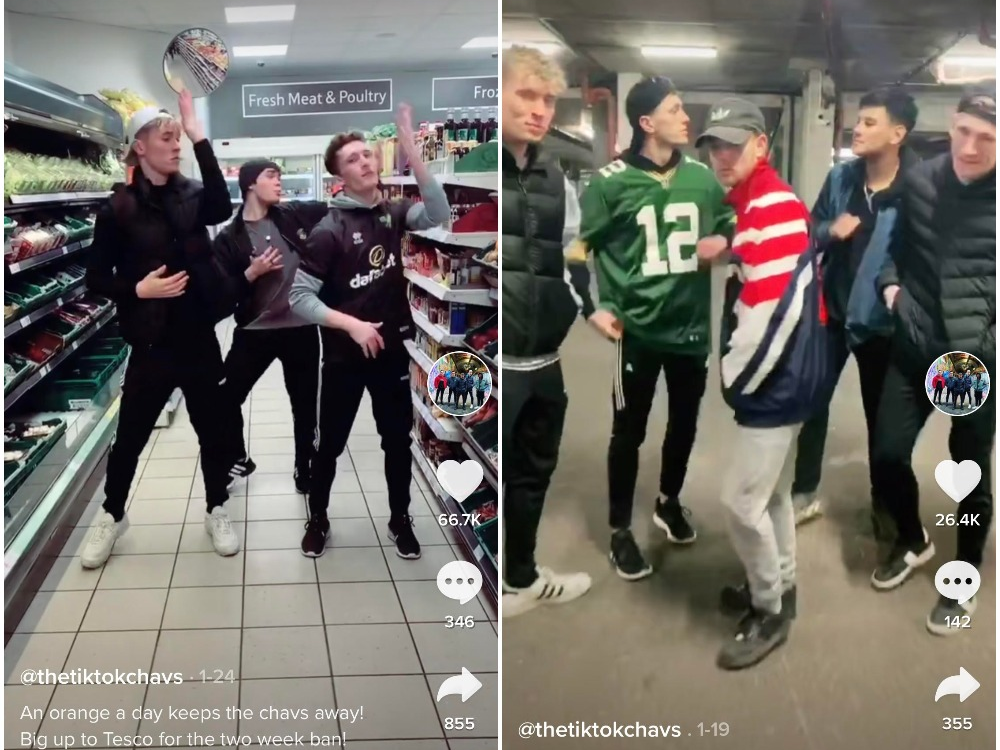 “I’d have to say none of us are exactly ‘chavvy’ in real life,” said Brooks. “We were all brought up quite well, which we try not to let our followers know.”

What does he think has made the group so successful? “I think, from that first video, people just found it really funny, you know… Just the idea of a group of chavs all dancing to this song.”

Asked if he thought a group of men pretending to be “chavs” for comic effect could be construed as problematic, he said: “We have been thinking about changing our name…

“The word ‘chav’ is obviously a bit controversial.”

Brooks insisted that the group’s members are not middle-class, with some of them being in receipt of government-backed Dance and Drama Awards, which provide financial support for those pursuing the creative arts. However, DADAs work on a sliding scale and smaller bursaries can be awarded to those with a household income exceeding $US110,000. When asked to clarify which of the extent of financial support received by the group’s members, they did not respond.

The Fabian Society, a leading left-wing organisation in the UK, has previously described use of the word as indicative of a “middle-class hatred of the…working-class”.

He added: “When it comes to jokes targeting those with less power and status in society, people should always stop, think, and ask themselves how they would feel if they were on the receiving end.”

It isn’t clear that such content breaches TikTok’s guidelines, though these describe the app as an “inclusive platform” focused on keeping users safe.