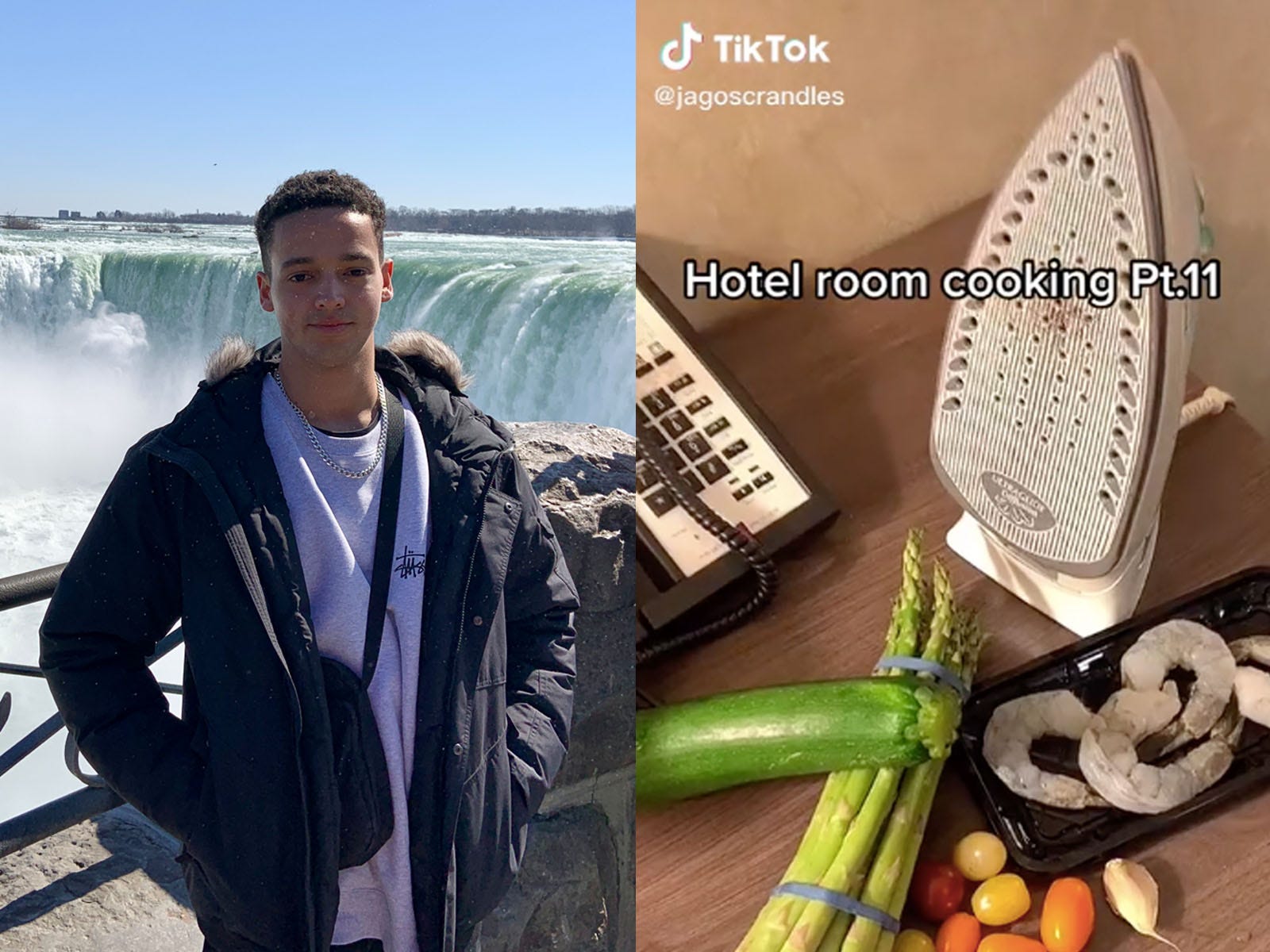 “That looks like some decent food â€” certainly some of the best food I’ve seen in any hotel,” an uncharacteristically flattering Gordon Ramsey said about a breaded chicken cutlet and steamed asparagus dish.

The meal comes courtesy of Jago Randles, a 23-year old chef from the UK who made it using only a coffee machine and a clothes iron while quarantined in a hotel room in Canada.

“That’s about the nicest thing I’ve heard him say on any of his TikToks,” Randles told Insider. “I figure I don’t really need a CV anymore. Any future potential employers, I’ll just send that over.”

Randles arrived in Canada from the UK on November 11 to start a job as a chef in Whistler, British Columbia. However, he had to self isolate in a local hotel for two weeks before he could start working.

His room only had a fridge and a microwave, and after one mediocre microwave meal and too much expensive takeout, he decided to work with what he had, both to save money and his sanity.

“I started off just watching TV and stuff and I was like, ‘ok, I’m going a bit insane.’ And I think maybe I did go a bit insane, and that’s how I started coming out with such crazy ideas,” he said.

As a professional chef, he had many kitchen utensils with him already â€” from knives and spatulas to cutting rings and meat thermometers â€” but all he had to work with in terms of appliances were a coffee maker, coffee pot, kettle, and clothes iron.

Since he wasn’t allowed to leave the room, he came up with menus and then ordered the groceries he needed, which were delivered to his door by hotel staff.

Randles made everything from fluffy pancakes with a blueberry compote to crispy crÃ¨me brÃ»lÃ©e with caramelised strawberries to salmon with noodles and steamed bok choy.

His favourite dish, however, was bacon-wrapped sous vide chicken in a creamy white wine and mushroom sauce.

“I think my favourite meal was the sous vide chicken just because it was probably the most out there. All of the other ones are, to me, an obvious option,” he said, adding that he was pretty pleased with how all of his meals turned out.

He originally only sent his cooking videos to friends and family, but after their encouragement decided to upload them onto TikTok, under the tagline “Isolation Kitchen.”

He uploaded his first video on November 21, and, at the time of writing, has since racked up 118.2k followers and 3.6 million likes on the app.

“They just really gained a lot of traction pretty quickly,” he said of his videos.

He encouraged others to get creative with their cooking, so long as they take care of the equipment.

He said he always covered the clothes iron with baking paper and the ironing board with Saran wrap to keep them clean for the next person and cleaned all appliances after each use.

“I got my deposit back,” he joked about the money he put down for his two-week hotel stay.

However, he advised those who want to try this to be careful to not “burn down their hotel room.”

Apart from the hotel appliances and kitchen utensils he already had, he also used takeout containers as mixing bowls and poked holes in one to use as a steamer basket.

The clothes iron he had in his hotel room doubled as a griddle, he repurposed the kettle as a steamer, and he used the coffee machine both as a hot plate and its coffee pot as a little pan as well as a sous vide water bath.

And while he’s no longer quarantining in a hotel room and has access to a full kitchen, he’s going to keep up “Isolation Kitchen.”

“I’m gonna carry on doing some crazy cooking on different household appliances because why not?” he said. “If people are enjoying it, and get some sort of fulfillment from [the videos], then I’m going to carry on doing it.”