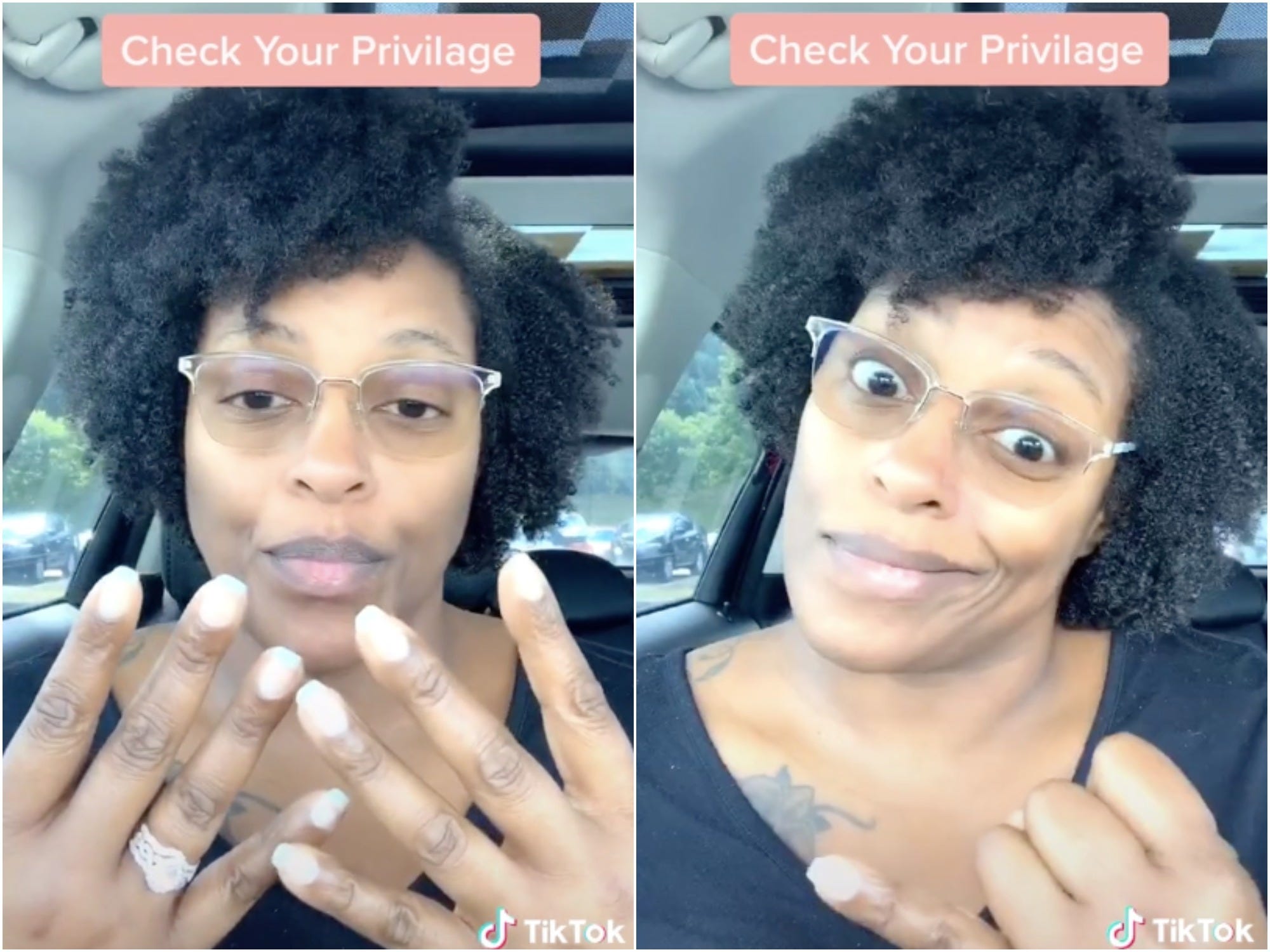 boss_bigmamma / TikTokKenya Bundy came up with the ‘Check Your Privilege’ challenge.

Kenya Bundy uploaded a TikTok in May, shortly after the news broke that 25-year-old Ahmaud Arbery was shot and killed by two white men in Glynn County, Georgia, and that it took over two months for them to be arrested.

She told Insider she’d set up her TikTok account, @boss_bigmamma, in April out of sheer boredom from the coronavirus lockdown, and had been trying a few different trends.

Her content shifted after the news of Arbery’s death, and she started addressing white people directly. She said they needed to have conversations with their children, friends, and family about how black people are not a threat.

“I just felt so overwhelmed that day,” Bundy said. “Just because we’re black, we’re not a threat.”

She said that’s when people started asking her more questions, “I guess just learn in general.”

She also wanted to spread the message in a thoughtful but easy way when she saw people on social media claiming that privilege doesn’t exist. That’s why she created the “Check Your Privilege” challenge.

“I started thinking about my personal experiences, and was just kind of like, maybe if we had a visual of the little things,” she said. “Because everybody though privilege was meant money. And I was like, well you really have to take it out of its definition and use it in the context of which the word is being used in society.”

The challenge involves putting a finger down if any of the 12 statements apply to you. If you have any fingers left at the end, then you have privilege.

Bundy wrote down 12 statements of experiences she’s had as a black woman, including being called a racial slur, being denied service because of the colour of your skin, and having to teach your child how not to be killed when dealing with the police.

The challenge consists of putting a finger down if any of the 12 statements apply to you, and if you have any fingers left at the end, then you have privilege.

Bundy’s video has gained a lot more momentum since the killing of George Floyd and the growing Black Lives Matter movement and protests all over the world.

“I just wanted to give everybody the opportunity to open a discussion and compare the experiences, and then hopefully we can kind of see where we lie in society and how we can actually help each other get past all this mess that we’re in,” she said.

@boss_bigmammaHow many willing to do this? All races. Privilege isnt allabout money. ##fyp##foryou##momsoftiktok##foryourpage##over40##challenge##dontflop

Thousands of people have made duet TikToks with Bundy’s sound to show how much privilege they do, or don’t, have.

Bundy didn’t exclusively mean white privilege when she set the challenge, but that’s what the majority of videos have been about.

Bundy said about 95% of the responses have been positive, with people telling her the challenge was a huge eye-opener for them, or made them realise how nobody should have to live in fear. Many have said they have to do better to recognise their own privilege and listen to people of colour.

“But then you have the negative, and you have people saying, ‘Well I’m white and I only have two fingers left,'” she said. “At the end, I did ask, ‘Any fingers left, that’s privilege.’ So it’s really about the small things sometimes, not about the huge picture.

“Just consider that if you’ve never had to teach your child how not to get killed by the police, that’s a privilege.”

The response has been mostly positive

“It’s slightly overwhelming honestly,” she said. “But overall it’s been positive. And it’s making me feel like I should keep going to help bridge the gap and create a platform where people can try to understand different experiences rather than just living in a bubble.”

Bundy said it’s really important people get out of their own spaces because one person’s experience does not equal everyone’s.

For example, she said she’s been getting messages from people claiming racism doesn’t exist because they “have black friends” or they “treat everybody the same.”

“If you’re going to base this whole situation of saying racism does not exist on your own personal life, and how you treat people, you’re in a bubble,” she said. “You’re really going to have to open your eyes and realise what’s actually going on around you, not just in your community.”

‘Slavery has just kind of transformed into a different thing’

She said you cannot ignore racism just because you yourself feel like you’re not racist, because “that’s really not how it works.”

“By being silent about it and not being part of the solution, we’re just feeding into it, and it’s getting worse,” she said. “Some people are like, ‘Oh it’s getting better, we’re not in slavery anymore,’ but slavery has just kind of transformed into a different thing. It’s still there, it’s just morphed into something different.”

She said she just wants everyone to open their eyes and see what the world is really like, and start having true empathy and compassion for other people and their experiences.

“We cannot invalidate other people’s experiences just because we have not ourselves experienced it,” she said. “And I think that’s really creating a bigger problem than what we should be facing in 2020.”

‘Rahul is a f—ing champ’: The DC man who gave refuge to more than 70 protesters fleeing police and pepper spray is being heralded as a legend

K-pop stans are using short videos called fancams to drown out racists online. This is how the movement started.

Black Lives Matter and ‘I can’t breathe’ makeup looks keep popping up, but beauty YouTubers are calling them ‘disrespectful’