The glamorous life of Tiffany Trump, the president's lesser-known daughter who just announced her engagement to her business executive boyfriend 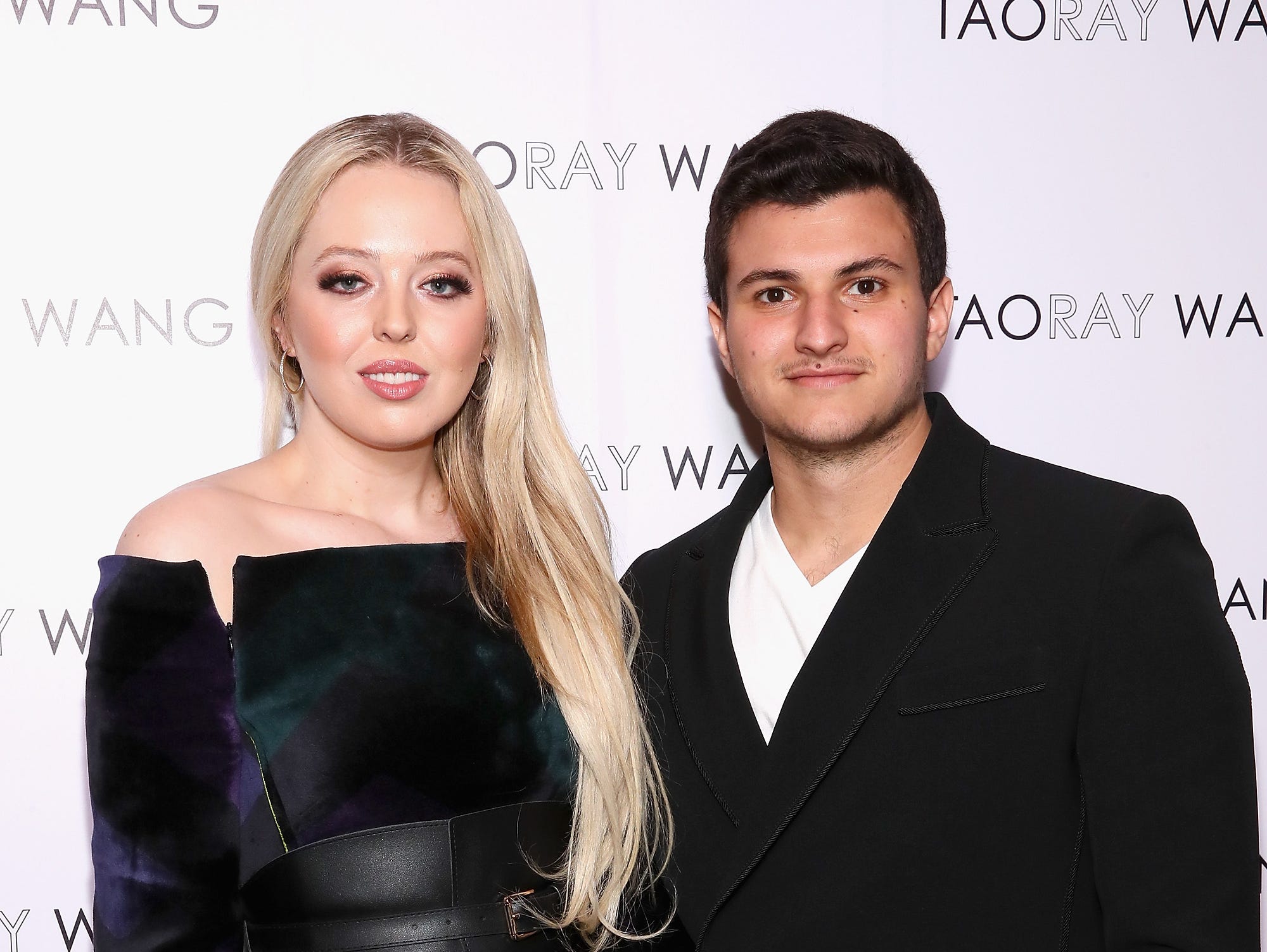 Astrid Stawiarz/Getty Images for Taoray WangTiffany Trump is engaged to Michael Boulos, the son of owners of a multi-billion dollar conglomerate based in Nigeria.

President Donald Trump’s family make up some of the top members of his administration and frequently voice their opinions to an eager media.

It’s not uncommon to see Ivanka, Eric, and Donald Jr. flash across your TV screen or splashed across the pages of international newspapers. But Tiffany Trump, 27, who has been called Trump’s “wild-card” daughter, has kept a lower profile than her older siblings.

Here’s a look at the life of the president’s most elusive adult child, who just announced her engagement to business executive Michael Boulos. 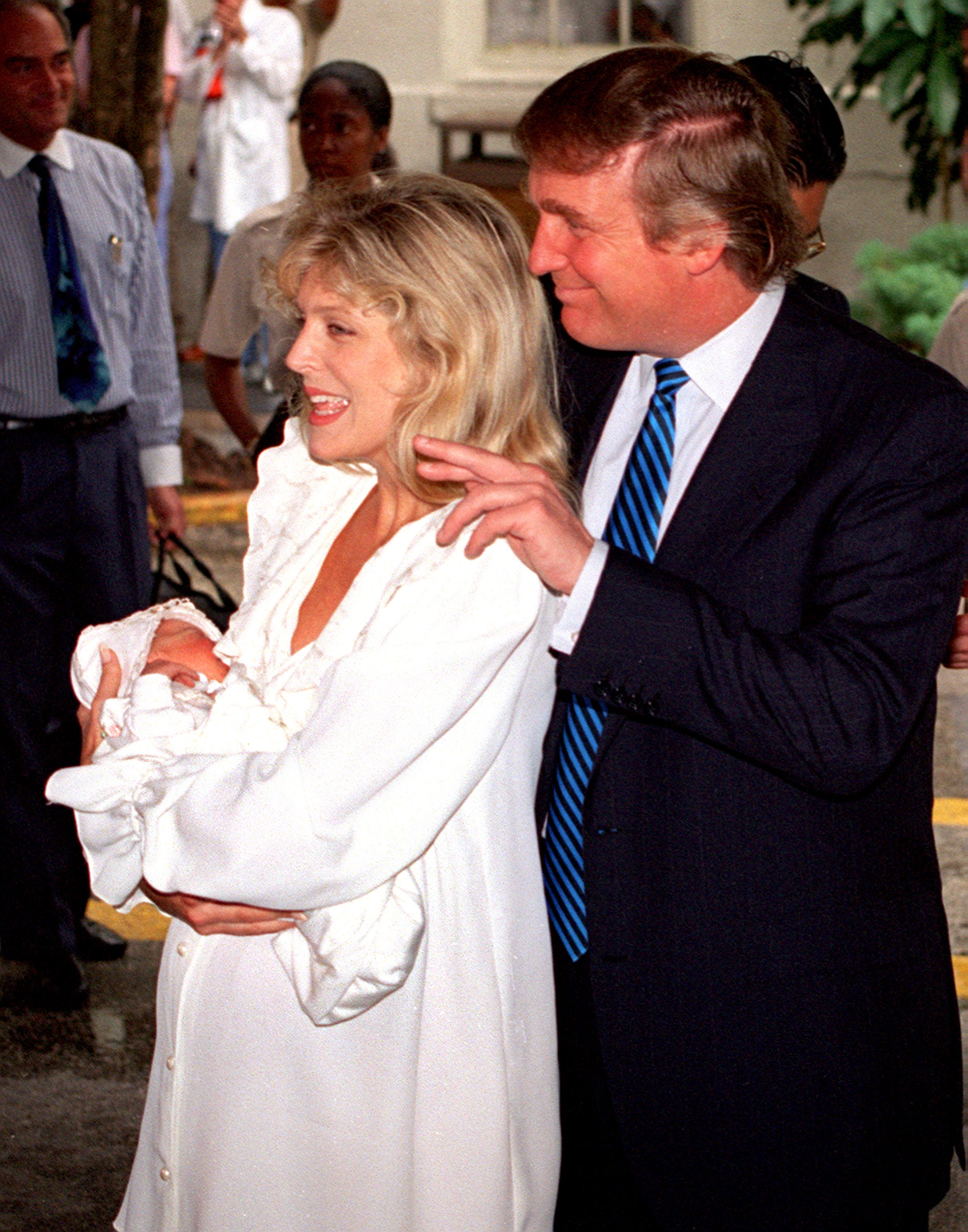 Hans Deryk/APMarla Maples and Donald Trump with newborn Tiffany in 1993.

New parents Marla Maples and Donald Trump greeted the press with their newborn daughter as they left St. Mary’s Hospital.

She was the first and only child of Donald Trump and his second wife, Marla Maples. 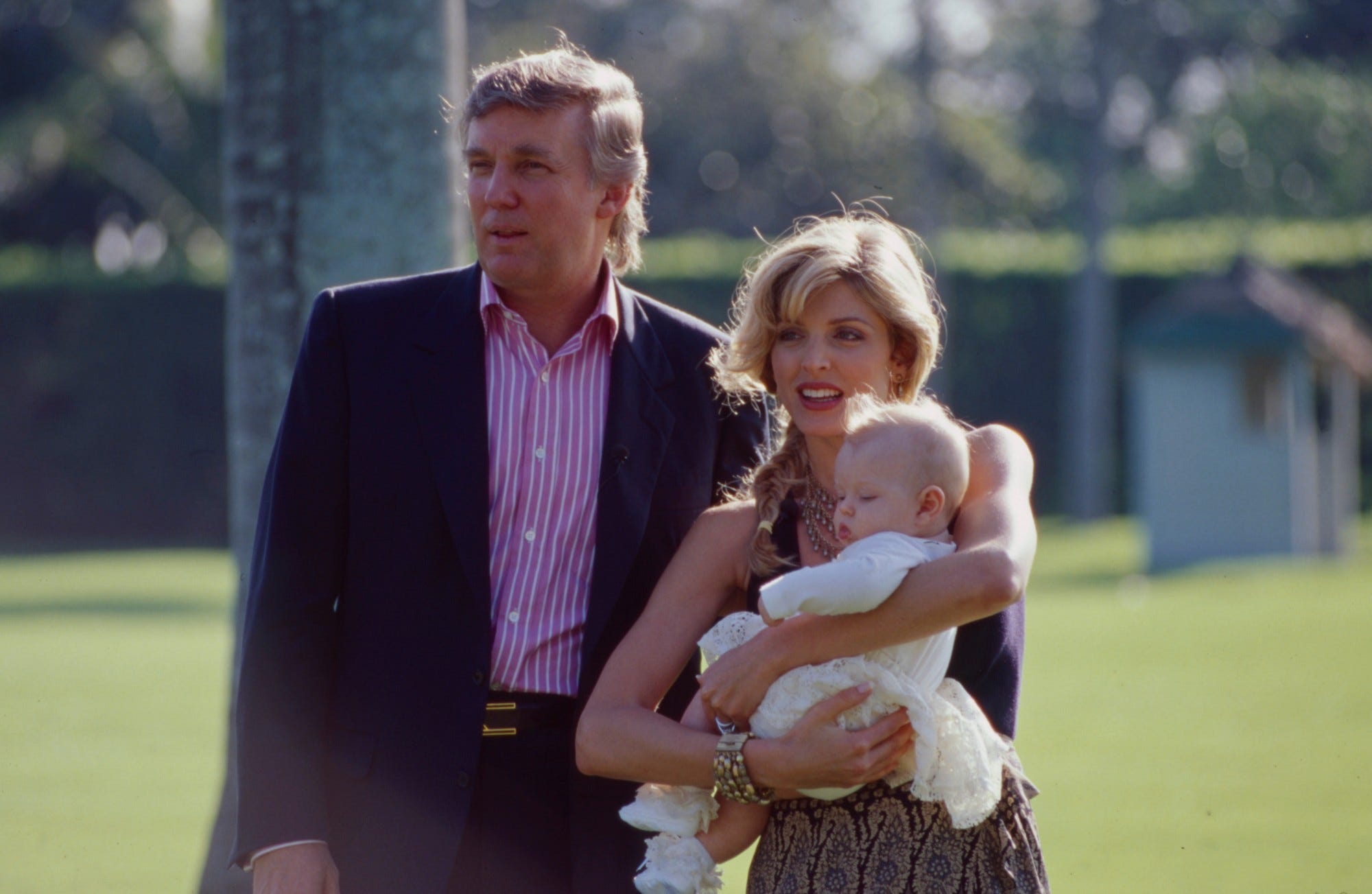 She was named after the Tiffany & Co. jewellery store in Manhattan at Fifth Avenue and 57th Street, adjacent to Trump Tower.

Tiffany spent much of her early childhood in New York, where the majority of her father’s real estate empire was based. 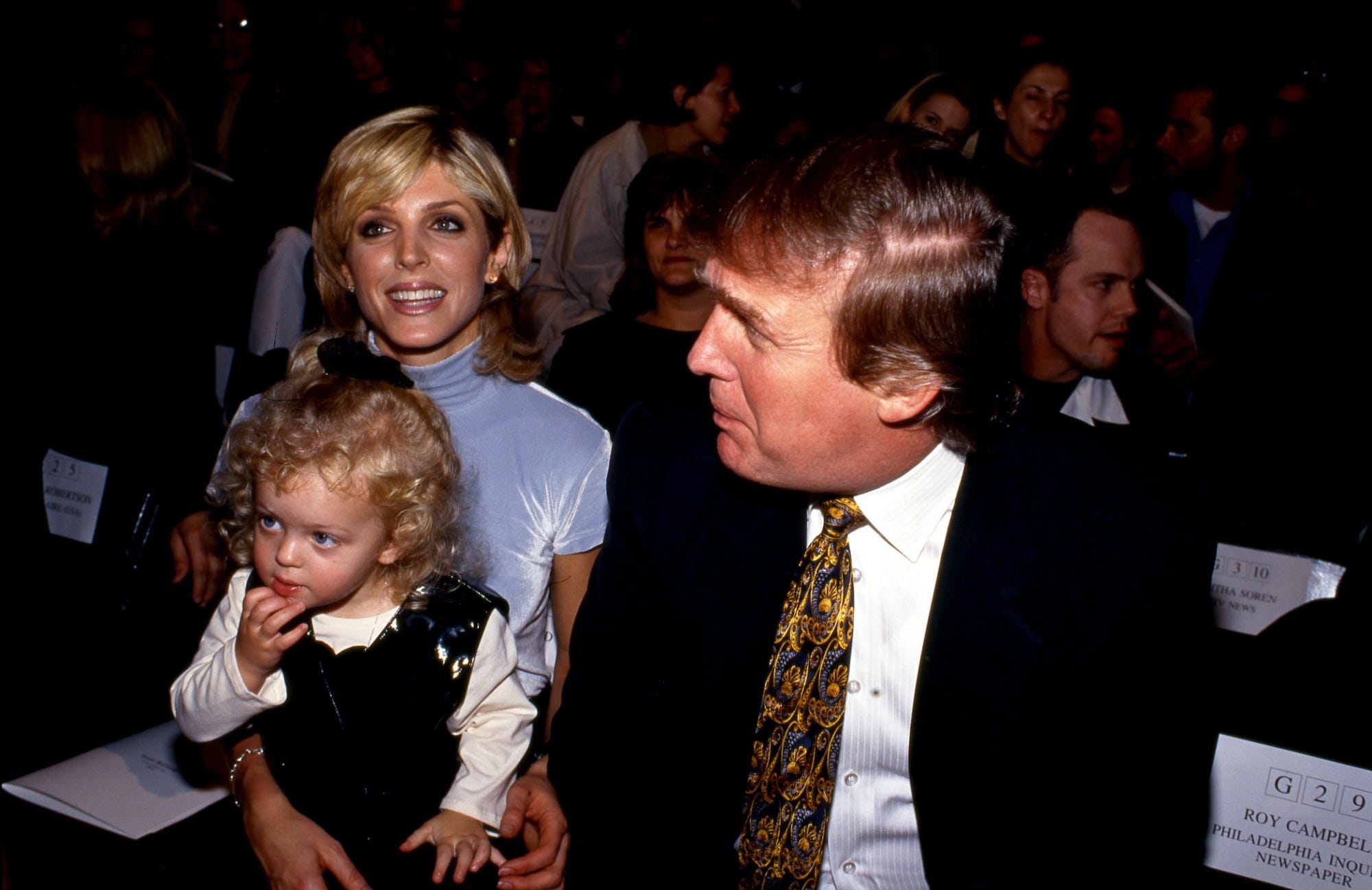 Catherine McGann/Getty ImagesDonald Trump and Marla Maples with Tiffany Trump at a fashion show in 1995.

She was a regular fixture in high society circles as she accompanied her famous parents to glamorous events, like New York Fashion Week.

Tiffany was often pictured alongside Trump’s three children from his previous marriage, Eric, Donald Jr., and Ivanka, at family celebrations. 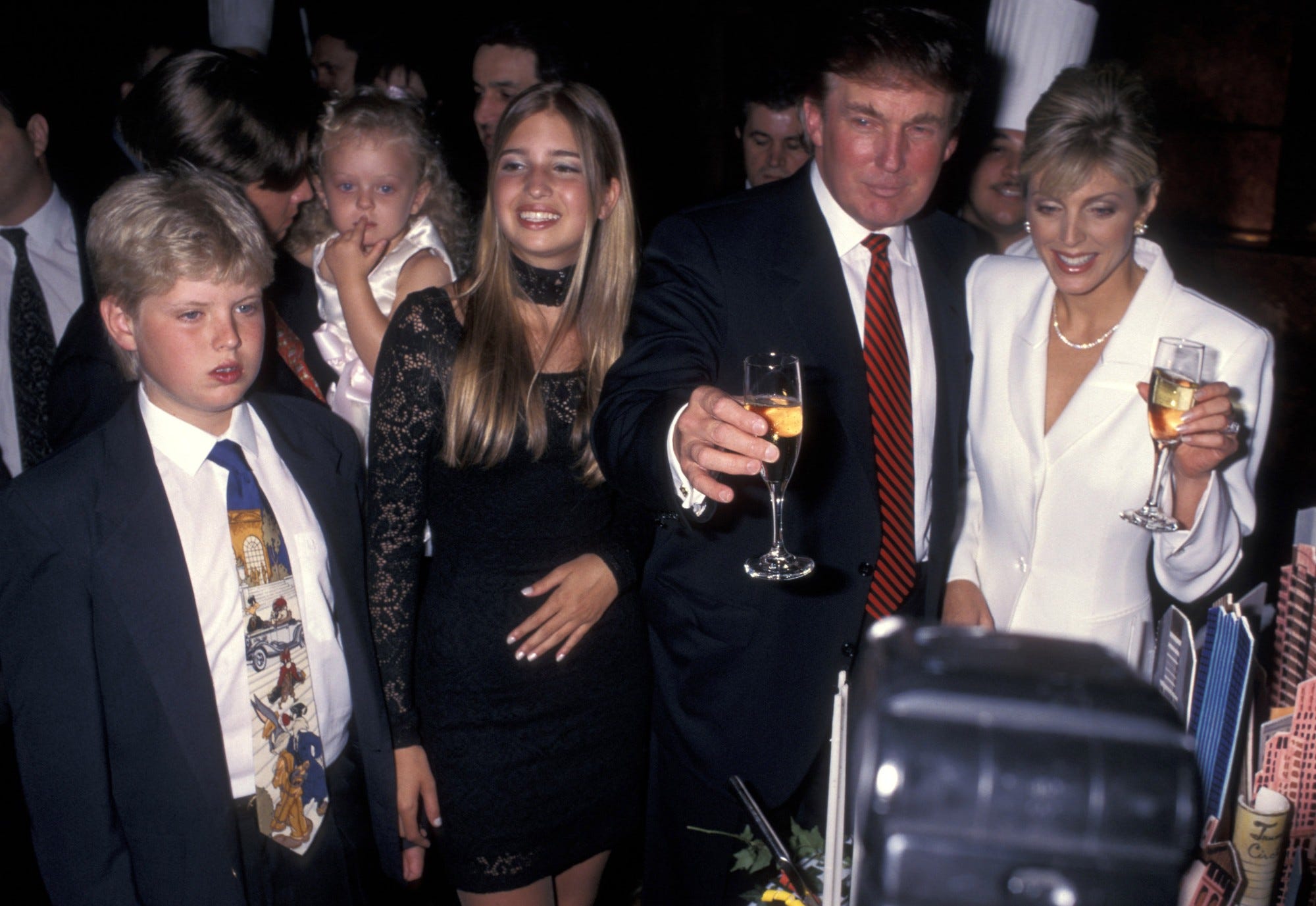 In adulthood, she has kept a lower profile than her siblings.

Tiffany spent her childhood between her family’s New York and Florida properties. 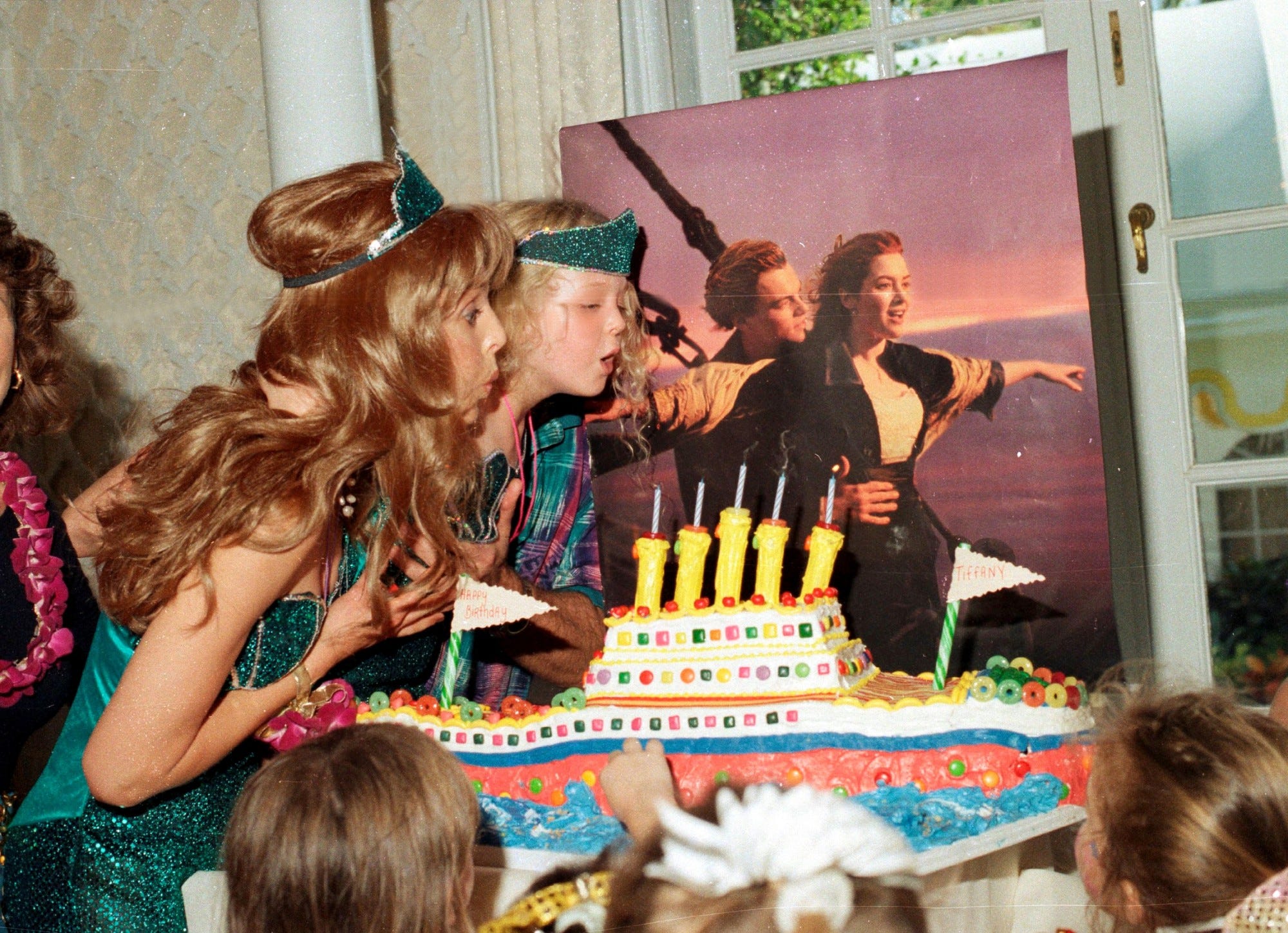 Davidoff Studios Photography/Getty ImagesWith the help of her mother, Tiffany Trump blows out the candles on her ‘Titanic’ cake during her fifth birthday party at the Mar-a-Lago estate in Palm Beach, Florida, in 1998.

For her fifth birthday, she took over part of the Trump Mar-a-Lago resort for a “Titanic”-themed party.

After Trump and Maples divorced in 1999, Maples moved with her daughter to Los Angeles where she said she raised Tiffany as a “single mother” across the country from her father. 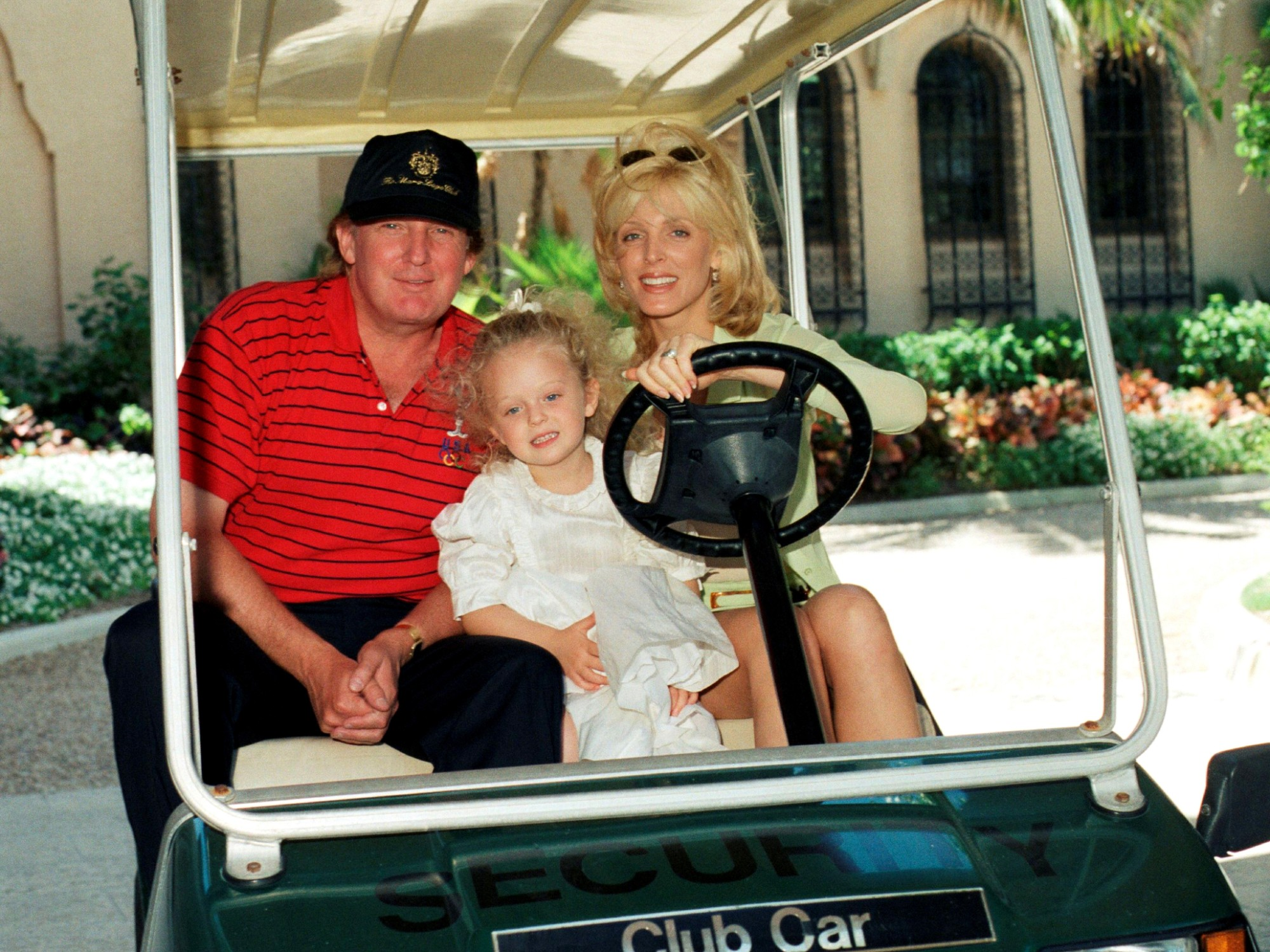 Trump and Maples finalised their divorce in 1999 – just after Trump and Melania Knauss first crossed paths – but they’d been separated since 1997.

While living with her mother in California, Tiffany attended the Viewpoint School in Calabasas, California. 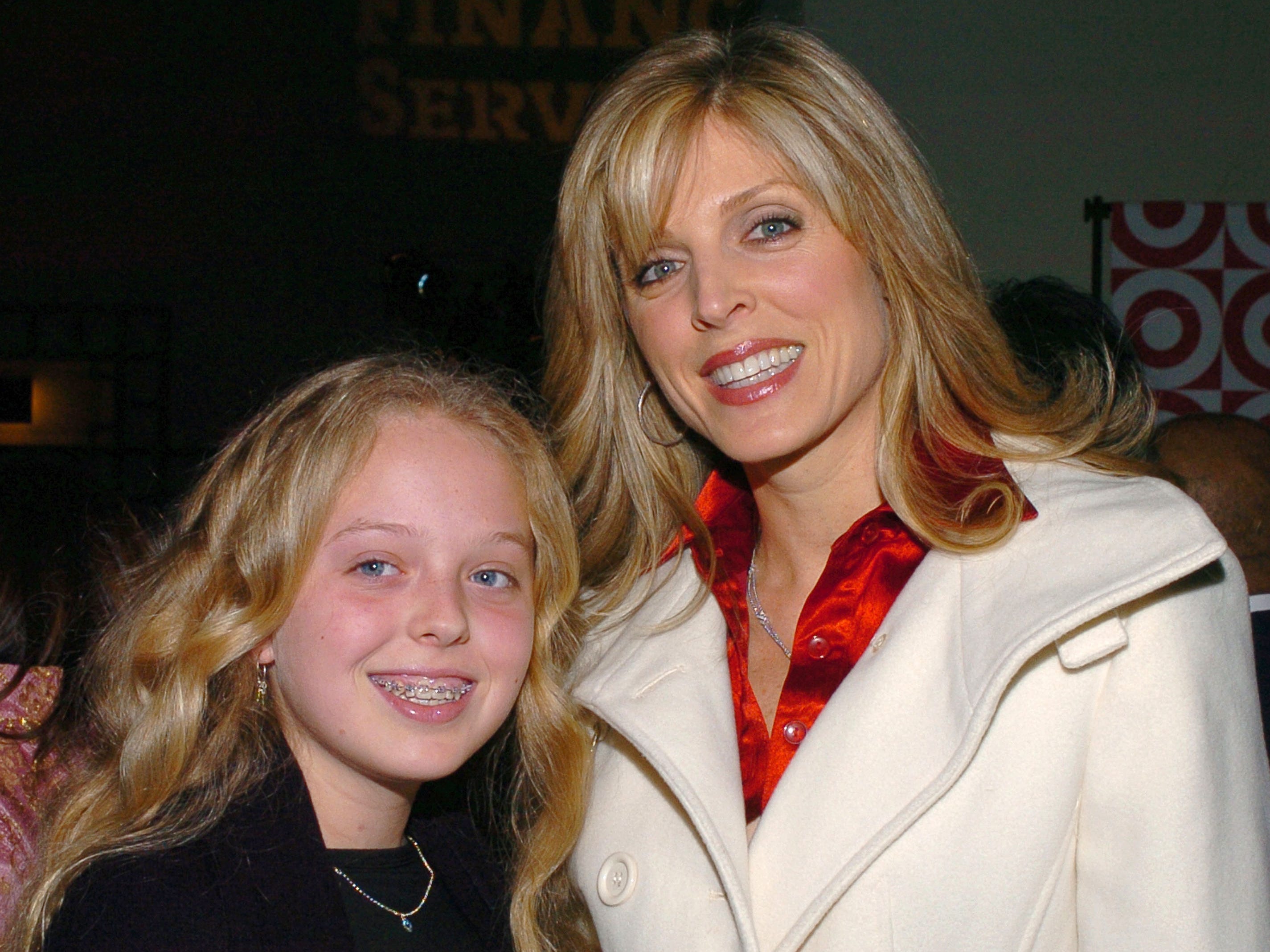 The kindergarten-through-12th-grade school charges upwards of $US36,000 for yearly tuition.

Though she was based in Los Angeles, Tiffany regularly visited New York to see her father. 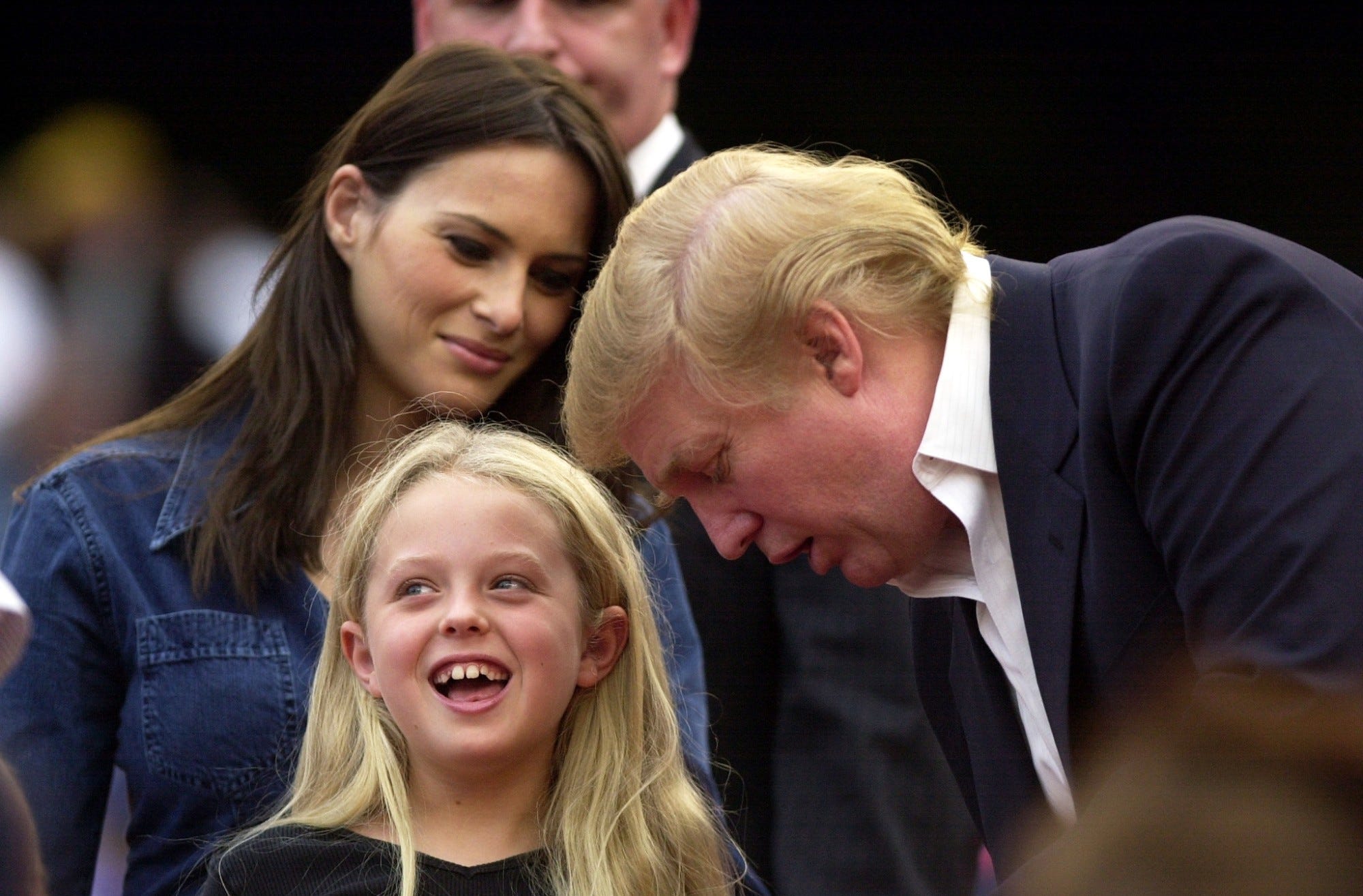 At age 7, she was photographed at a Mets game with Trump and his then-girlfriend Melania Knauss.

As Tiffany became a teenager, she made more public appearances, usually alongside her father. 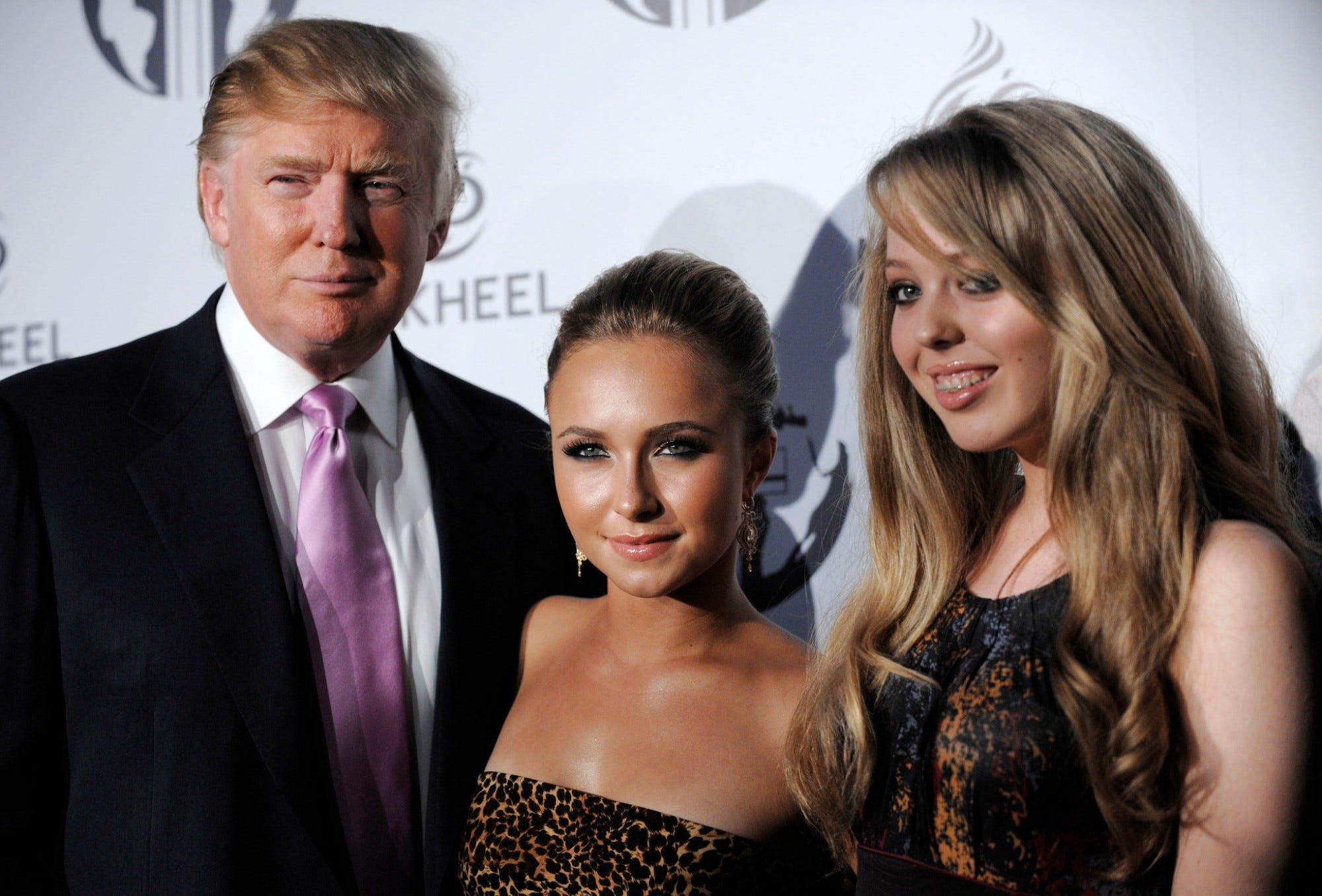 Chris Pizzello/APDonald Trump and his daughter Tiffany with actress Hayden Panettiere in 2008 in Los Angeles.

She attended an event introducing Trump Tower Dubai in Los Angeles in 2008.

In 2011, Tiffany released a pop-electronic single called “Like a Bird.” 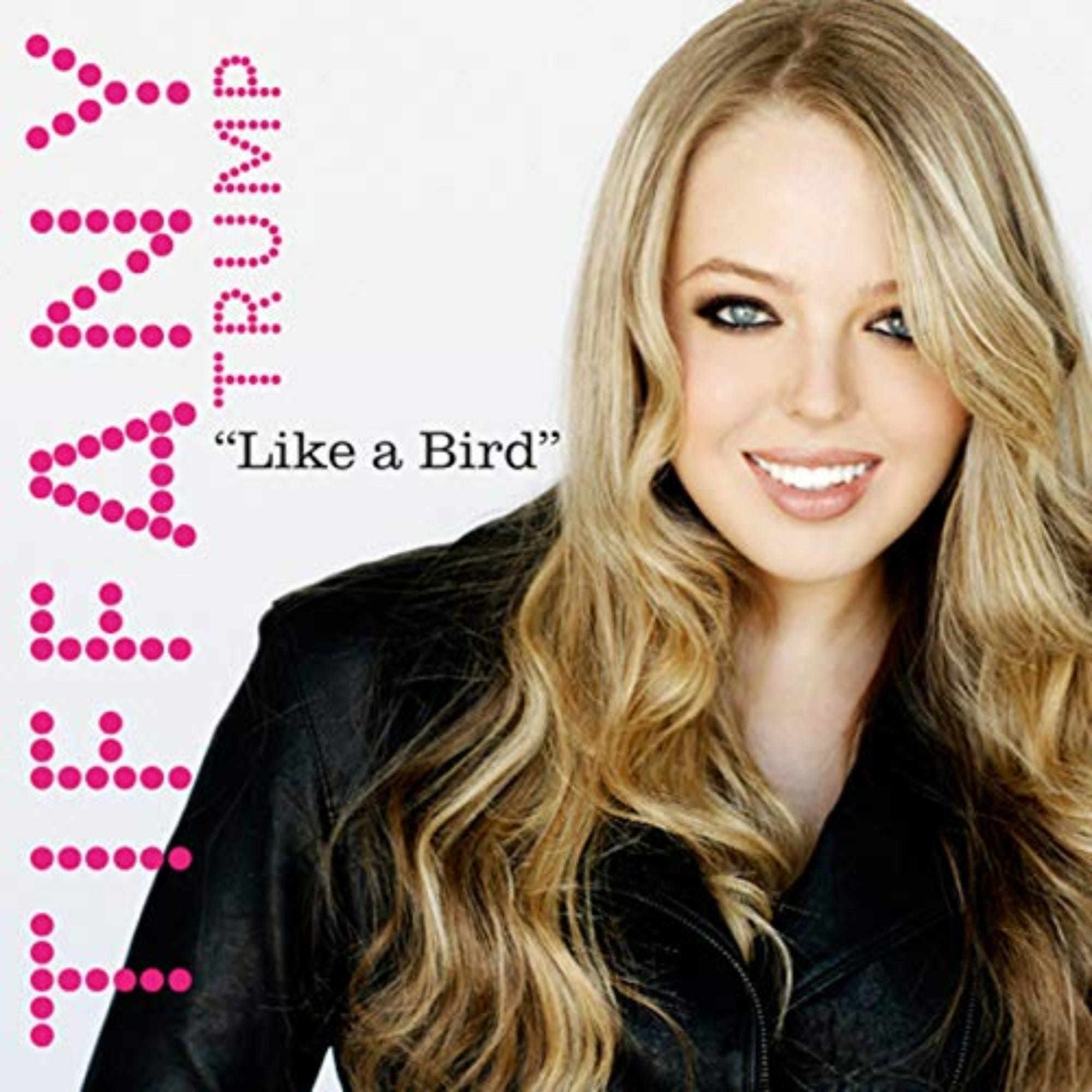 She told Oprah Winfrey at the time that though she was focused on college, “we’ll see in a couple of years if I actually do want to take it to the next level, to a professional level.”

After graduating high school in 2012, she made the move back to the East Coast to attend her father’s alma mater, the University of Pennsylvania. 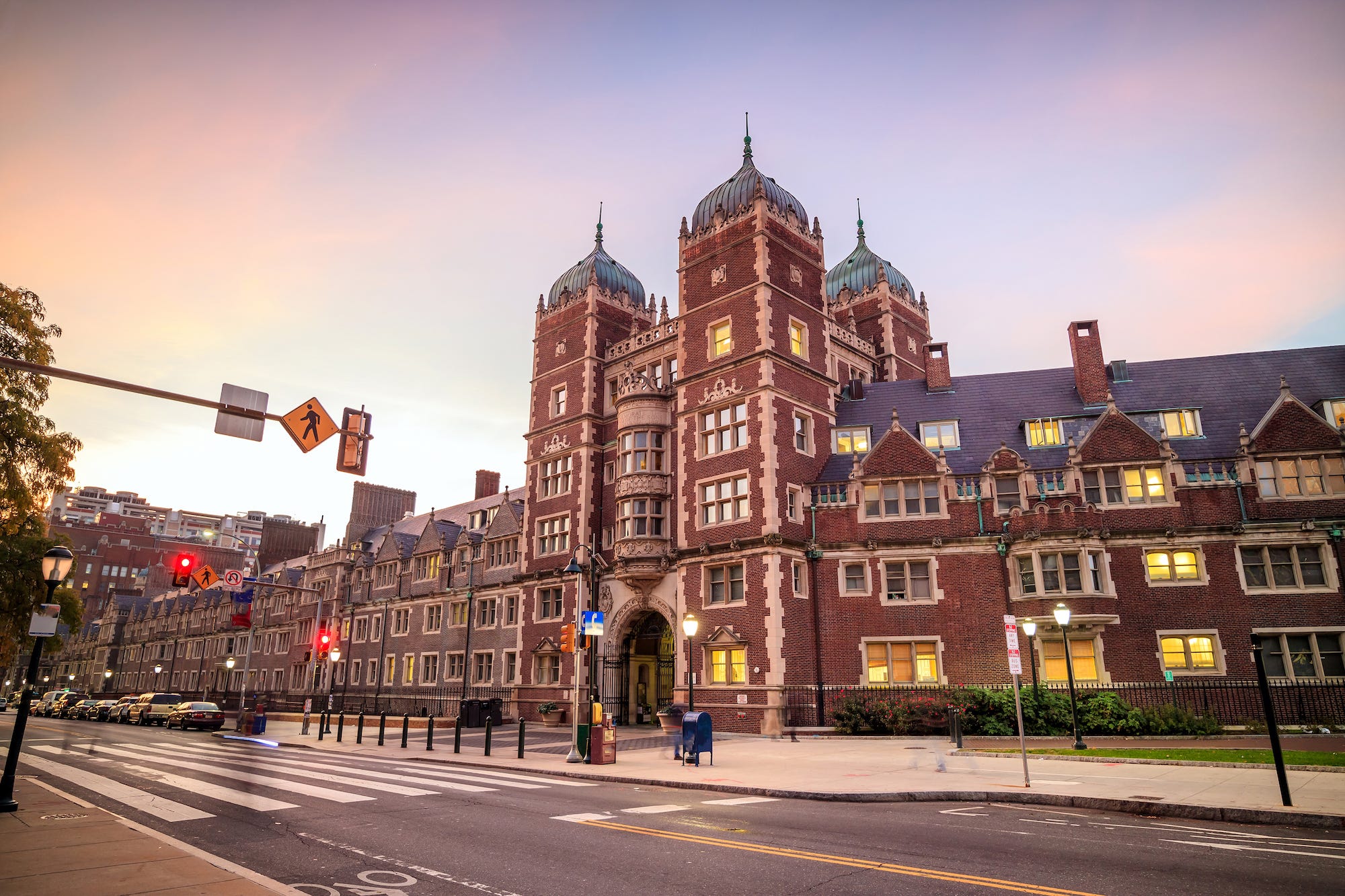 She double majored in sociology and urban studies.

Her older half-sister Ivanka, who had years of success with her own fashion label, helped Tiffany score an internship at Vogue in the summer of 2011. 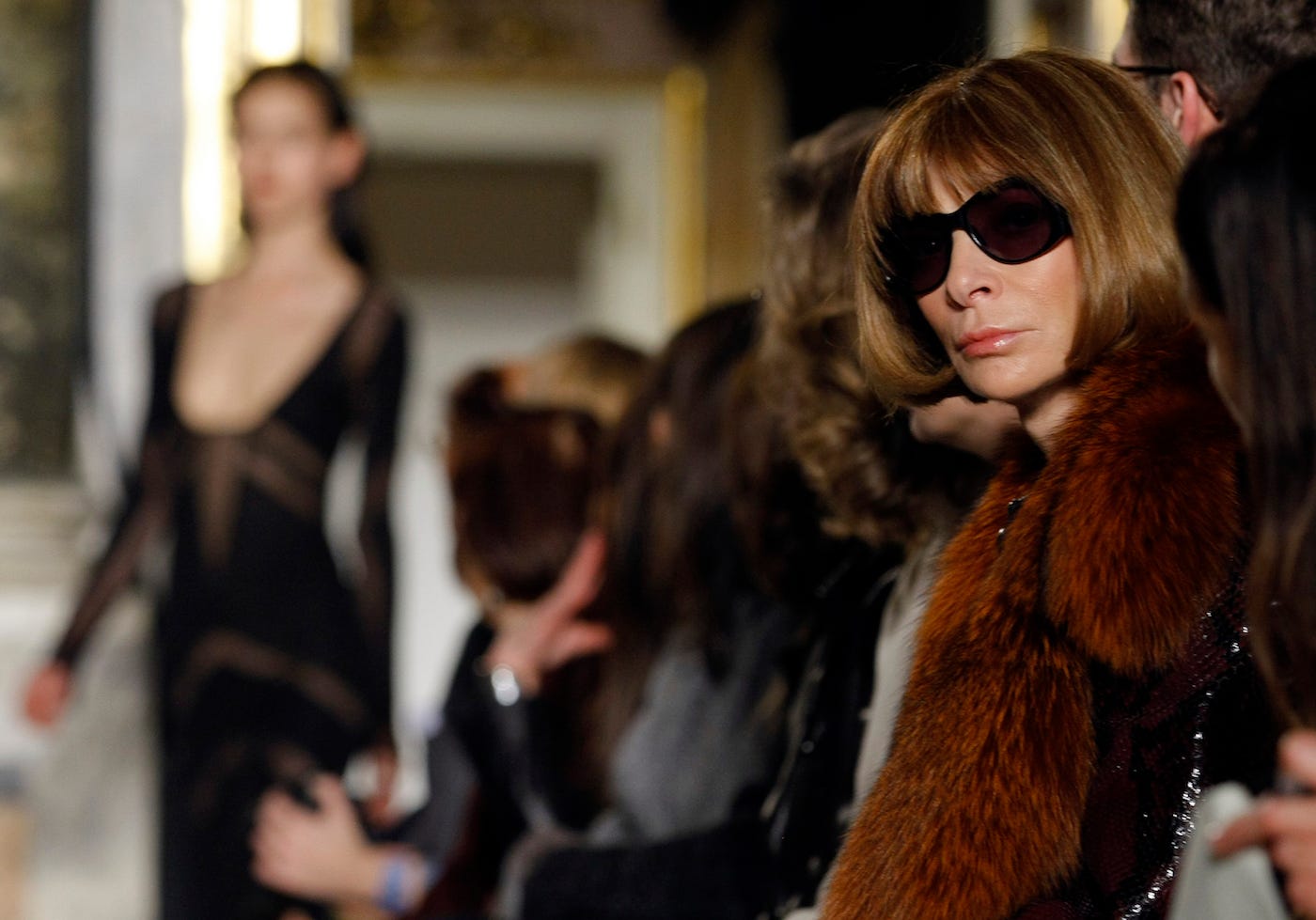 While interning at Vogue, Tiffany reportedly had lunch with legendary Editor-in-Chief Anna Wintour.

Tiffany gradually became a socialite in her own right after appearing at fashion and art events around New York City. 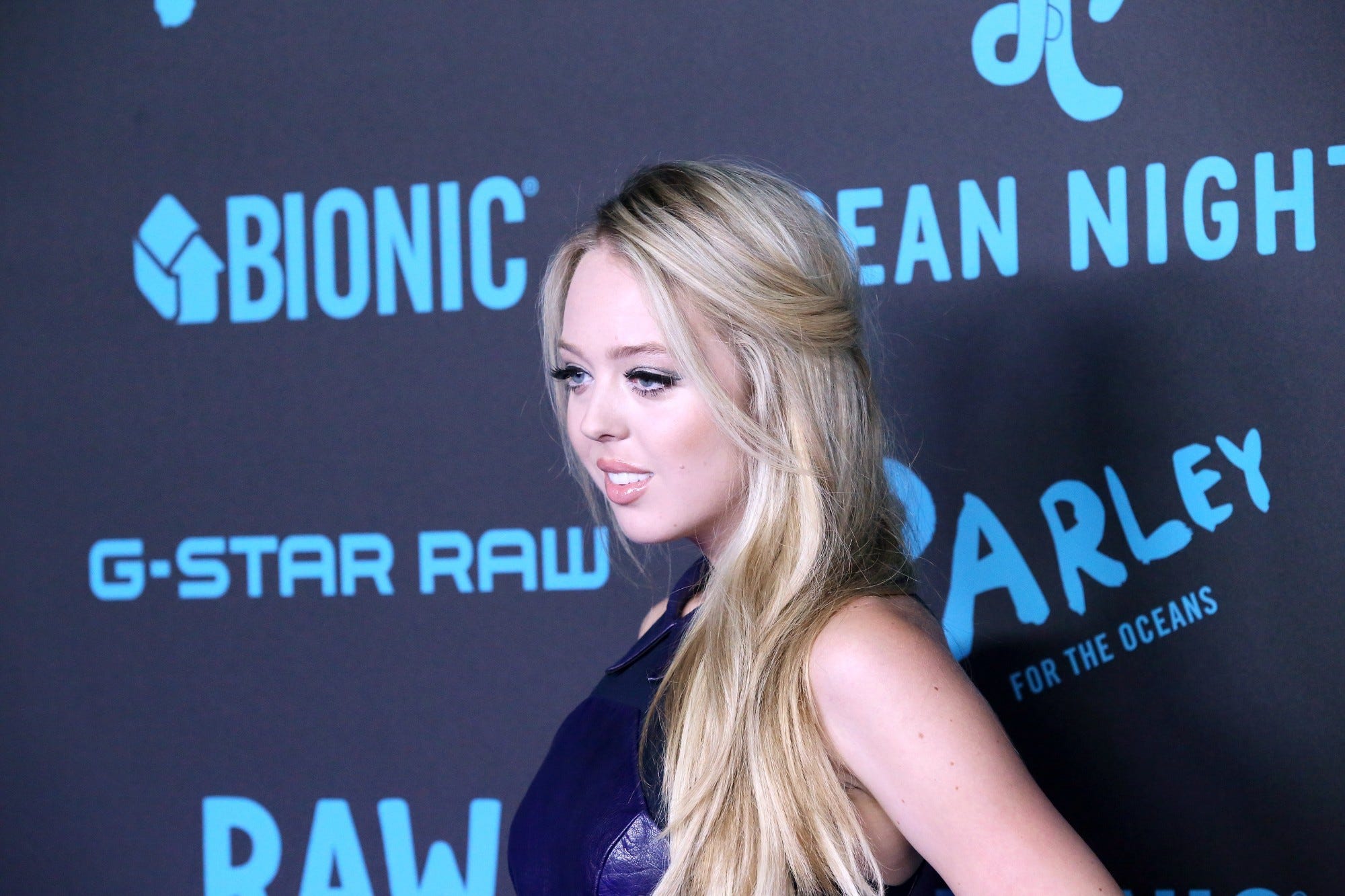 She attended Mercedes-Benz Fashion Week in 2014 in New York City.

Tiffany was considered part of a group of wealthy young socialites called the “Rich Kids of Instagram.” 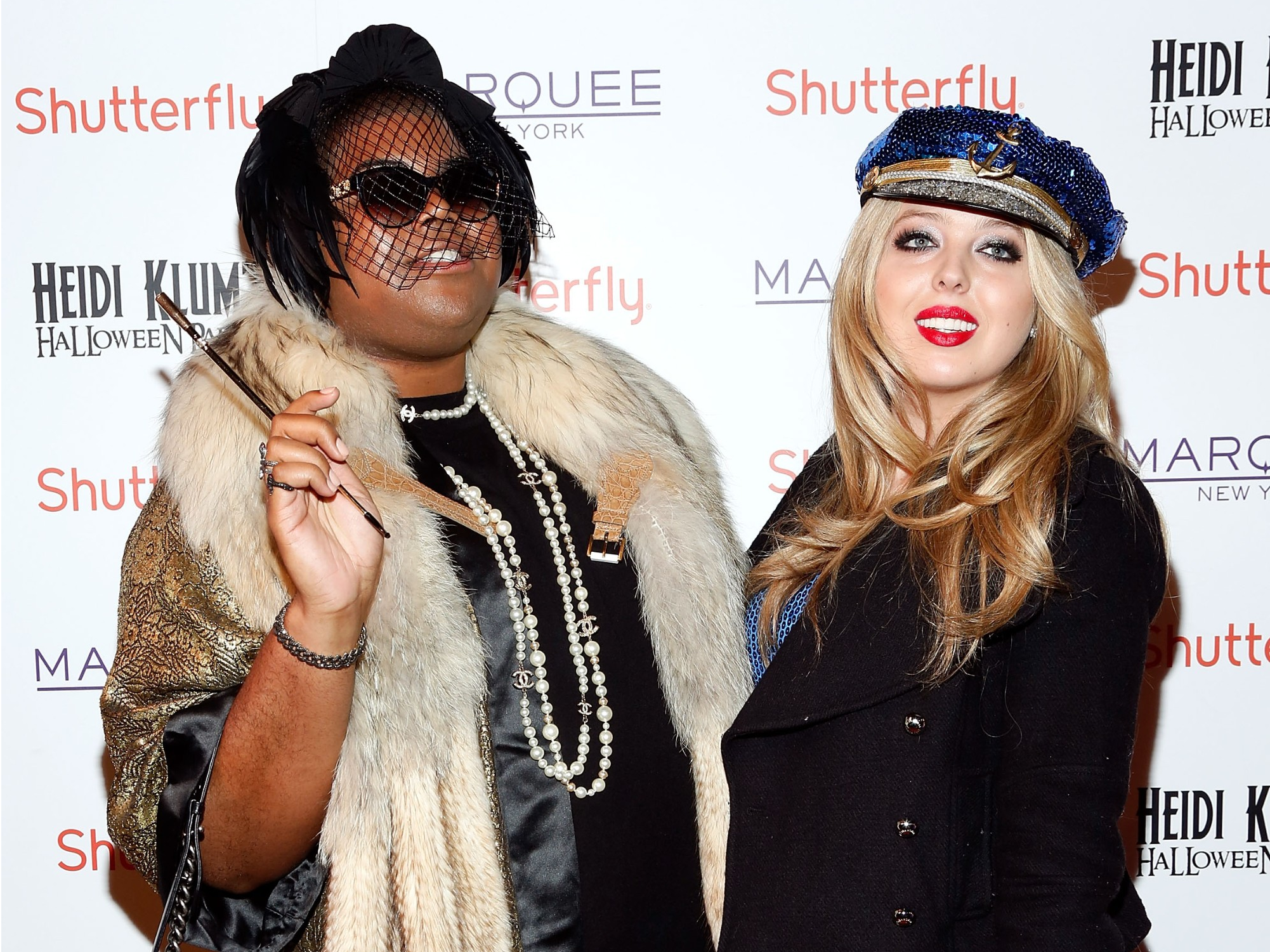 Though she was still a college student, Tiffany was noticeably on-hand for some early appearances ahead of Trump’s presidential bid. 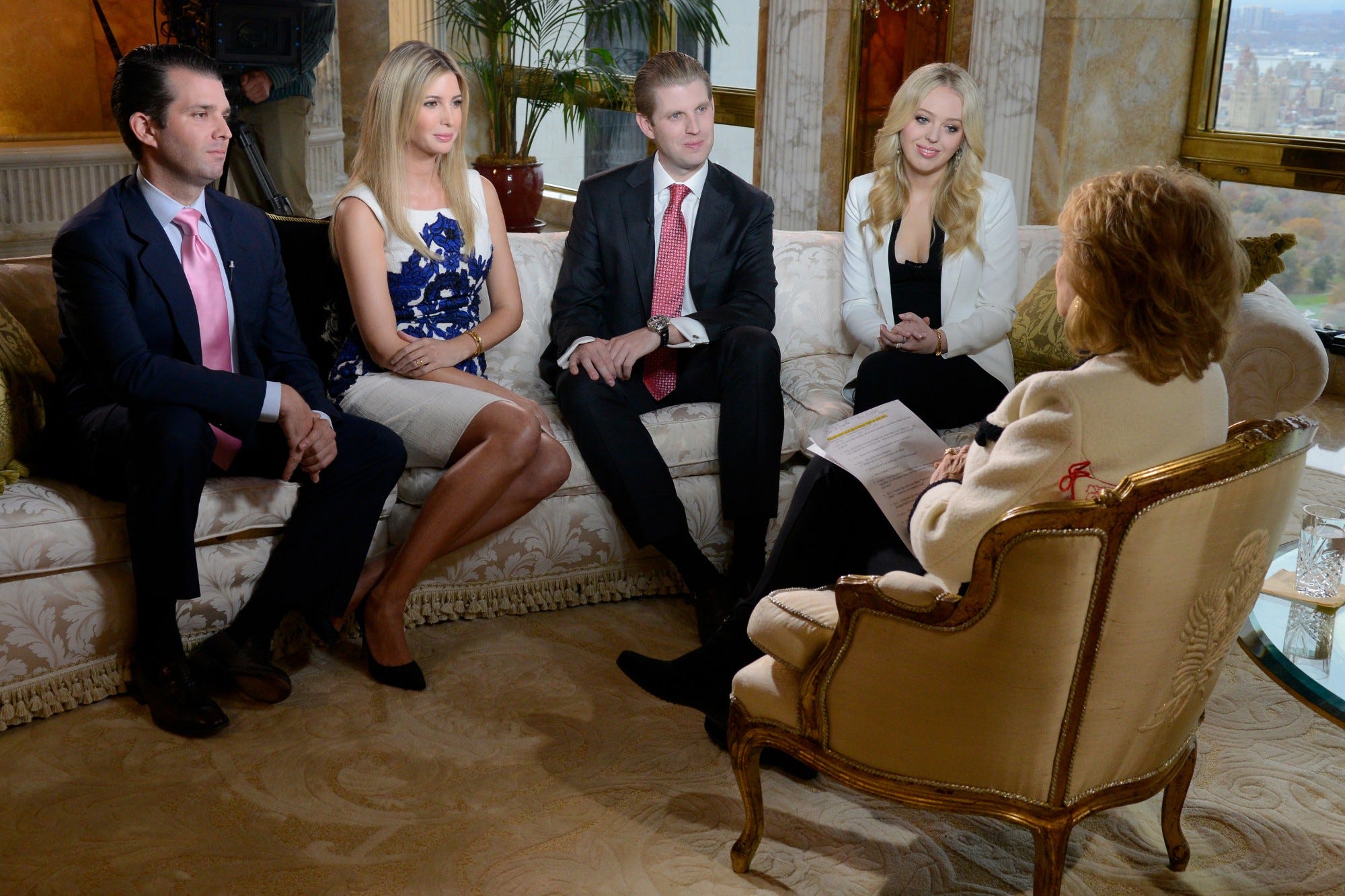 Lorenzo Bevilaqua/ABC via Getty ImagesTrump’s children sit down for an interview with ABC News’ Barbara Walters in a special edition of 20/20.

She sat down for a 2015 interview with Barbara Walters along with Ivanka, Eric, and Donald Jr.

The future first daughter’s profile was also rising on social media, where she posted images from glamorous vacations and scenes from her life on campus. 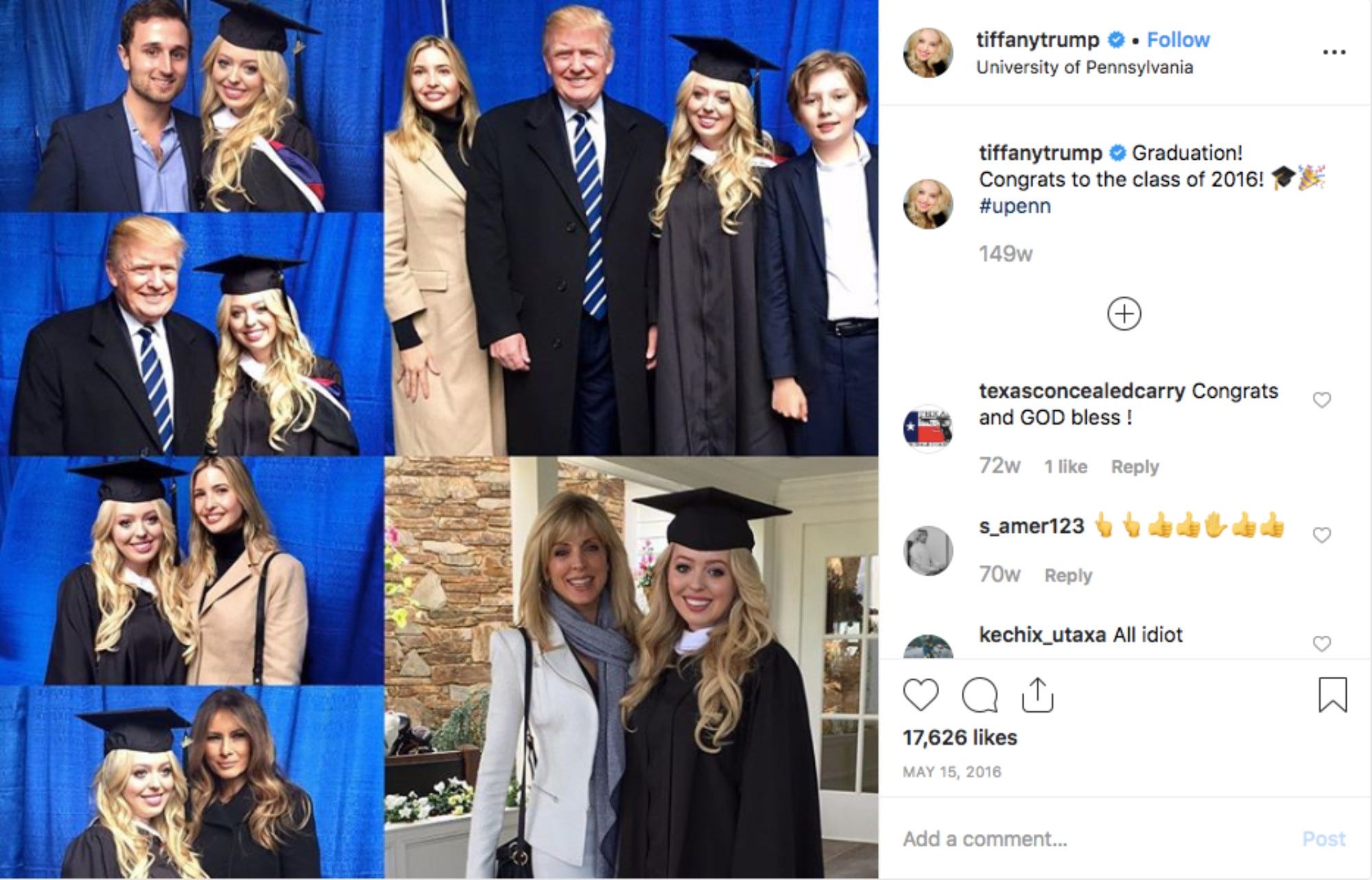 Tiffany made a splash with an unexpected speech at the July 2016 Republican National Convention in Cleveland, Ohio. 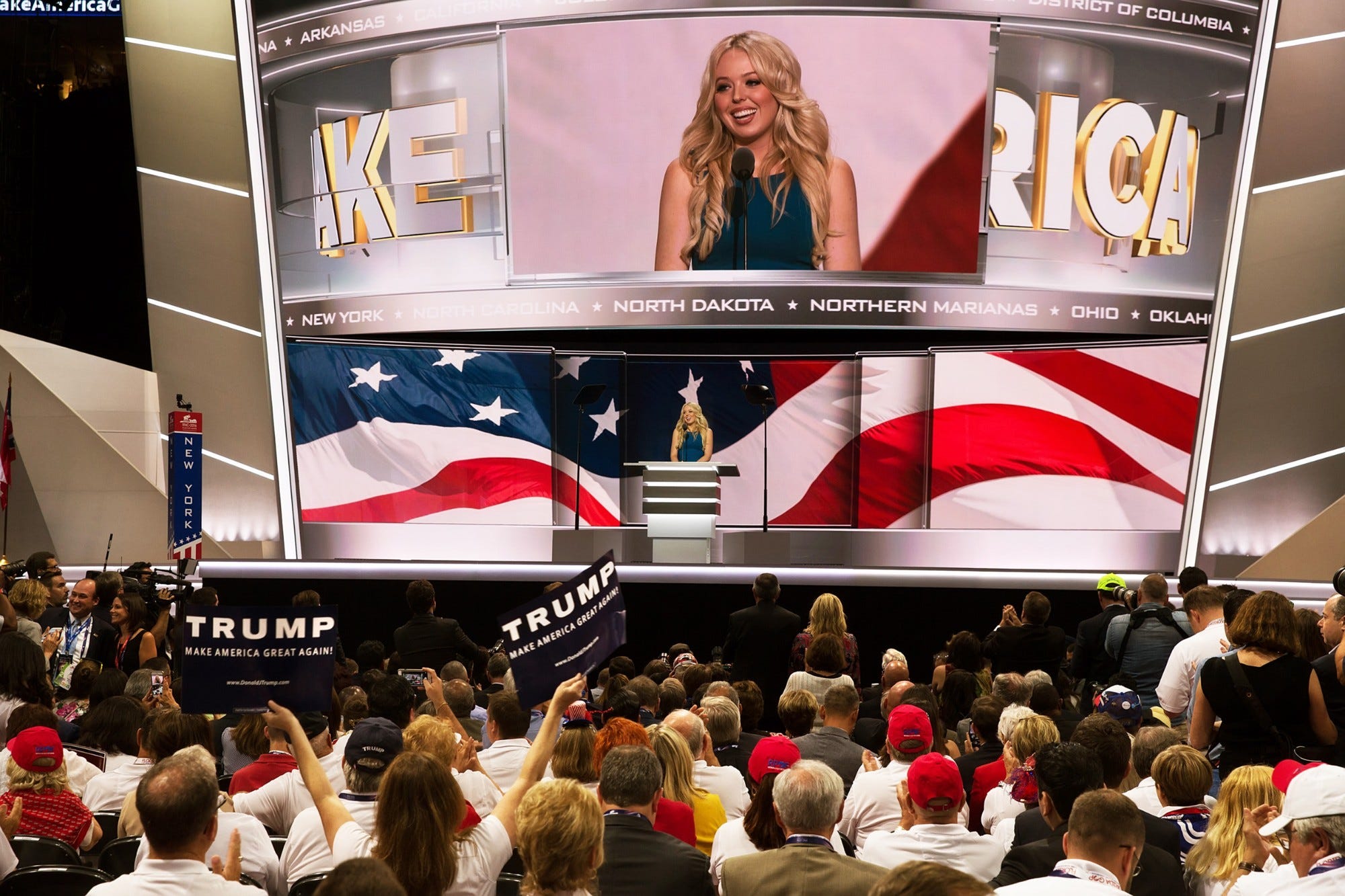 David Hume Kennerly/Getty ImagesTiffany Trump speaks from the podium at the 2016 RNC.

She painted a glowing picture of her father, saying, “He’s always helped me be the best version of myself.”

As the campaign waged on, Tiffany was often present for big family appearances after her May 2016 graduation. 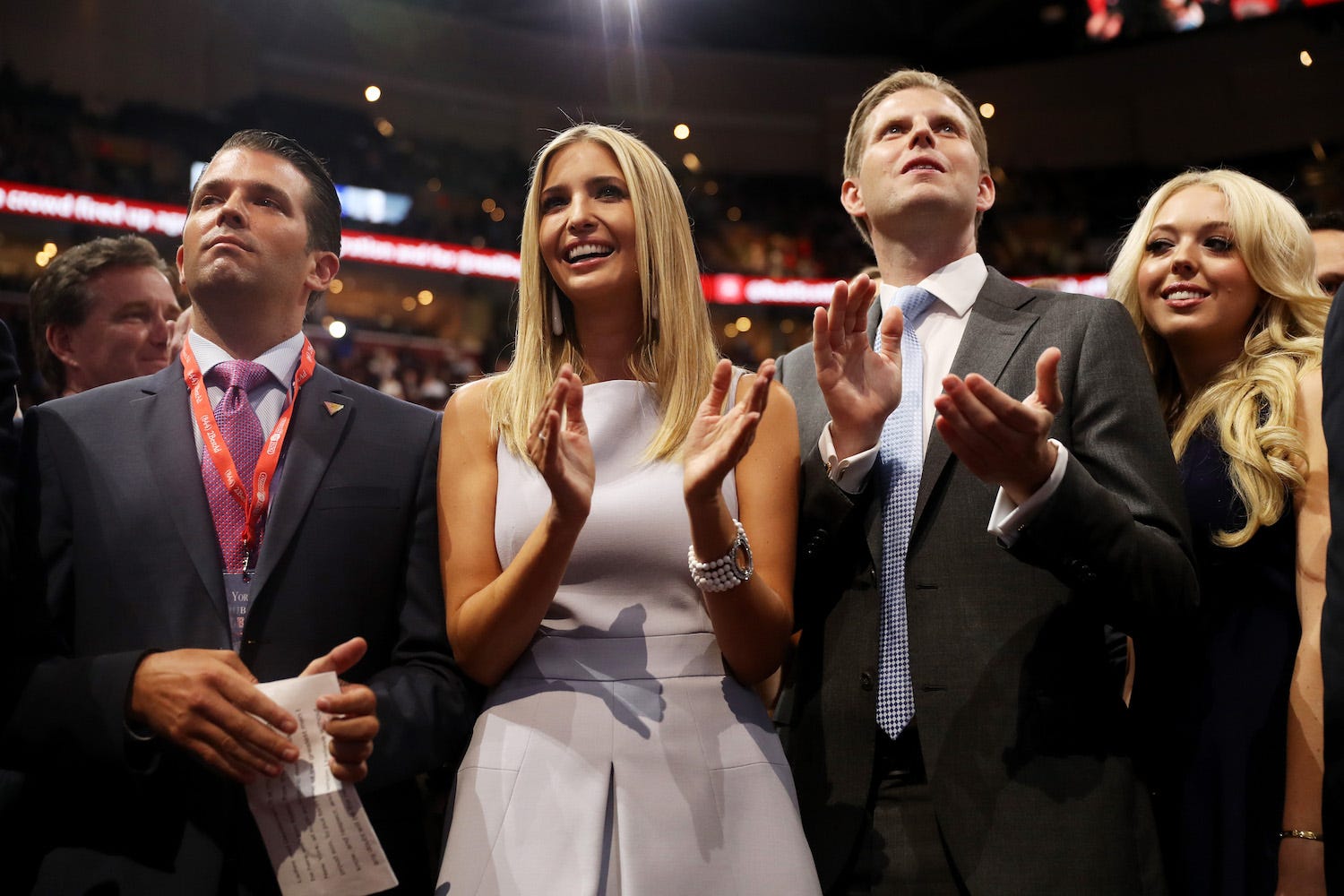 Donald Jr. and Ivanka emerged as the siblings with the biggest formal roles on Team Trump. 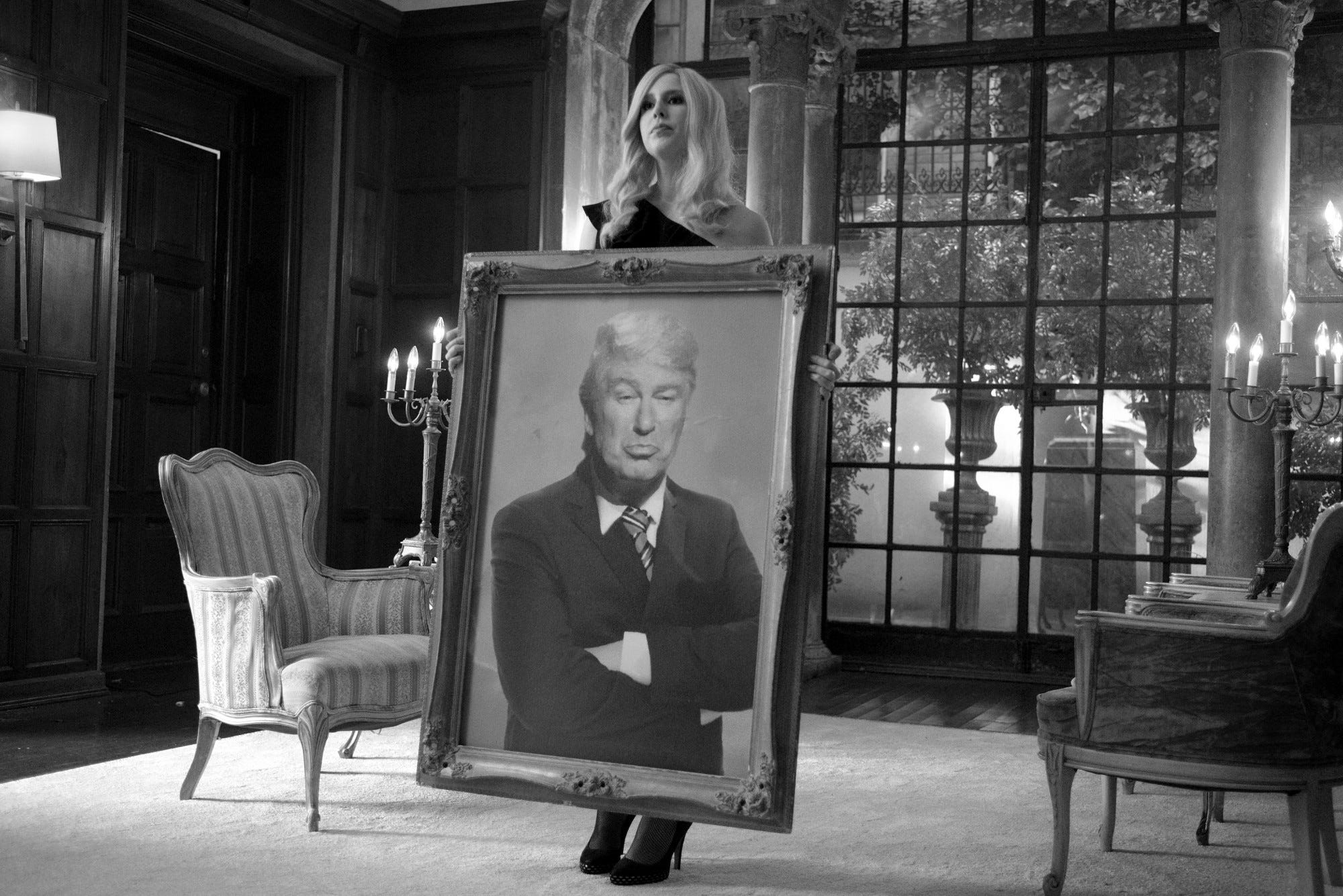 “SNL” cast member Vanessa Bayer, playing Tiffany, sang that she “killed that convention speech, no lie, but I’ll never be Ivanka in your eye.”

Tiffany began a new venture after the election, starting law school at Georgetown University in the fall of 2017. 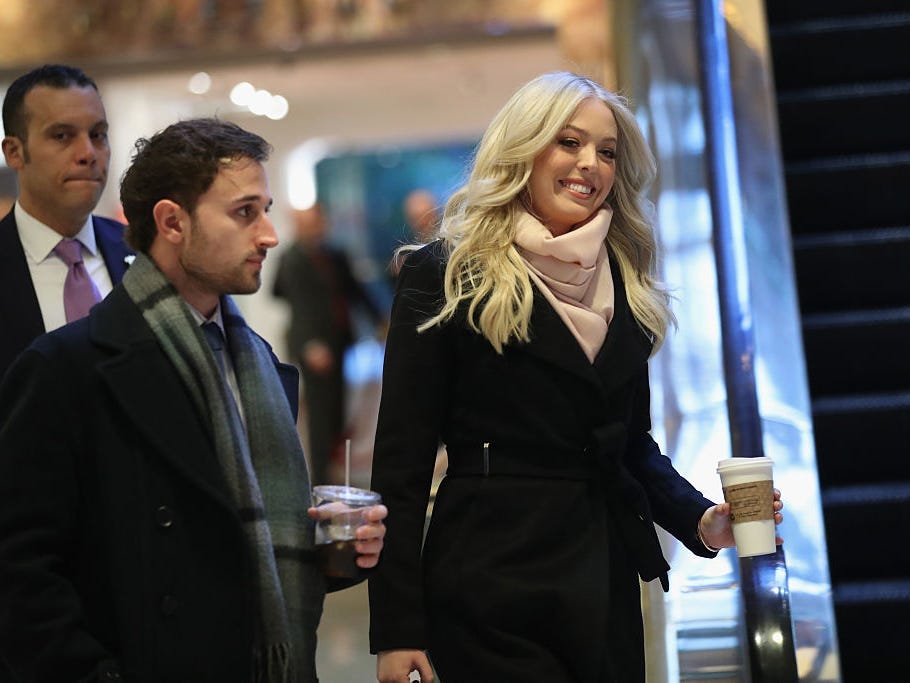 She had also been spotted visiting Columbia, Harvard, and New York University.

Tiffany kept up occasional social appearances during her studies. 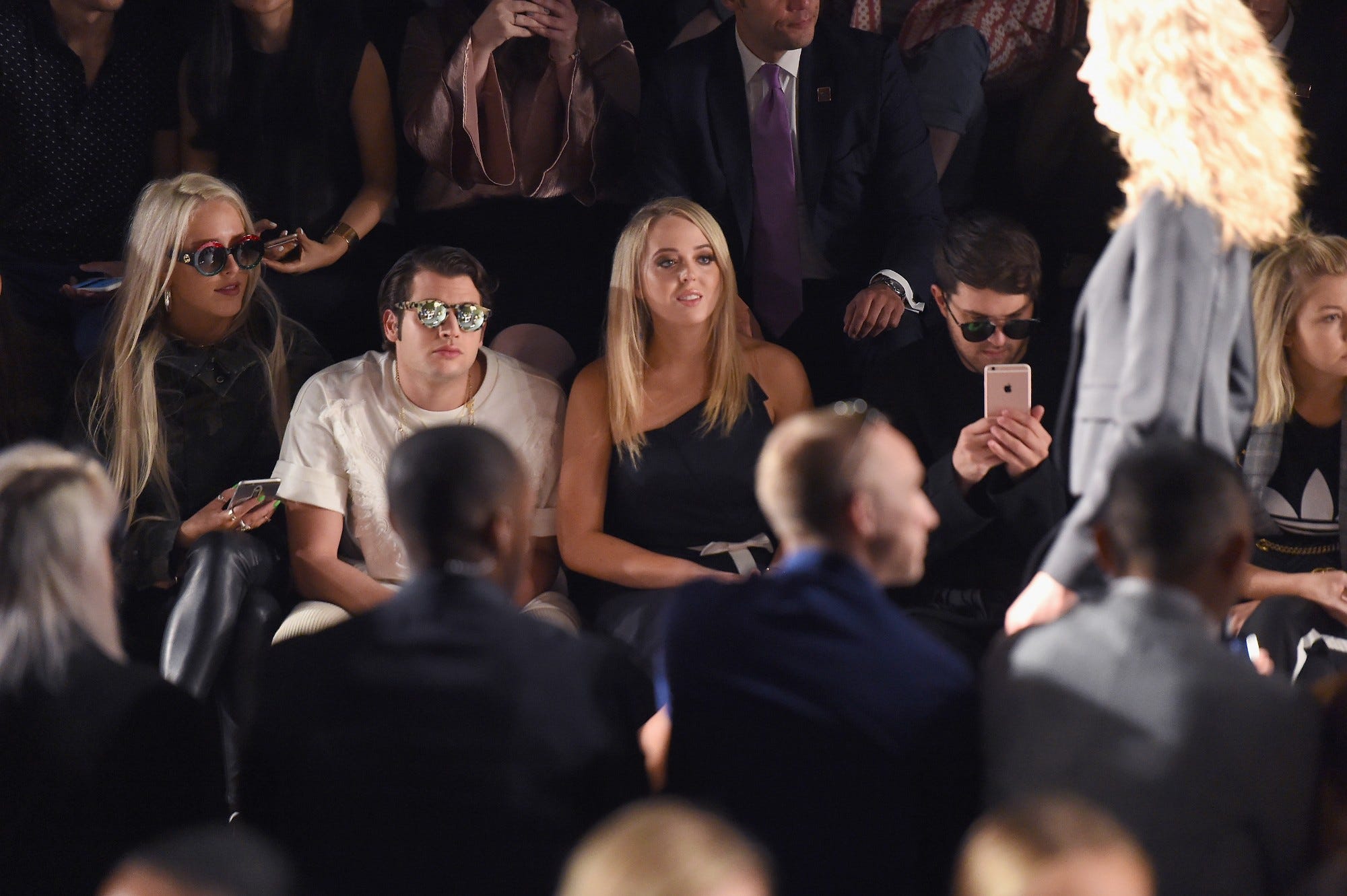 She attended New York Fashion Week in her first few weeks of classes in September 2017.

She also joined her siblings at official appearances. 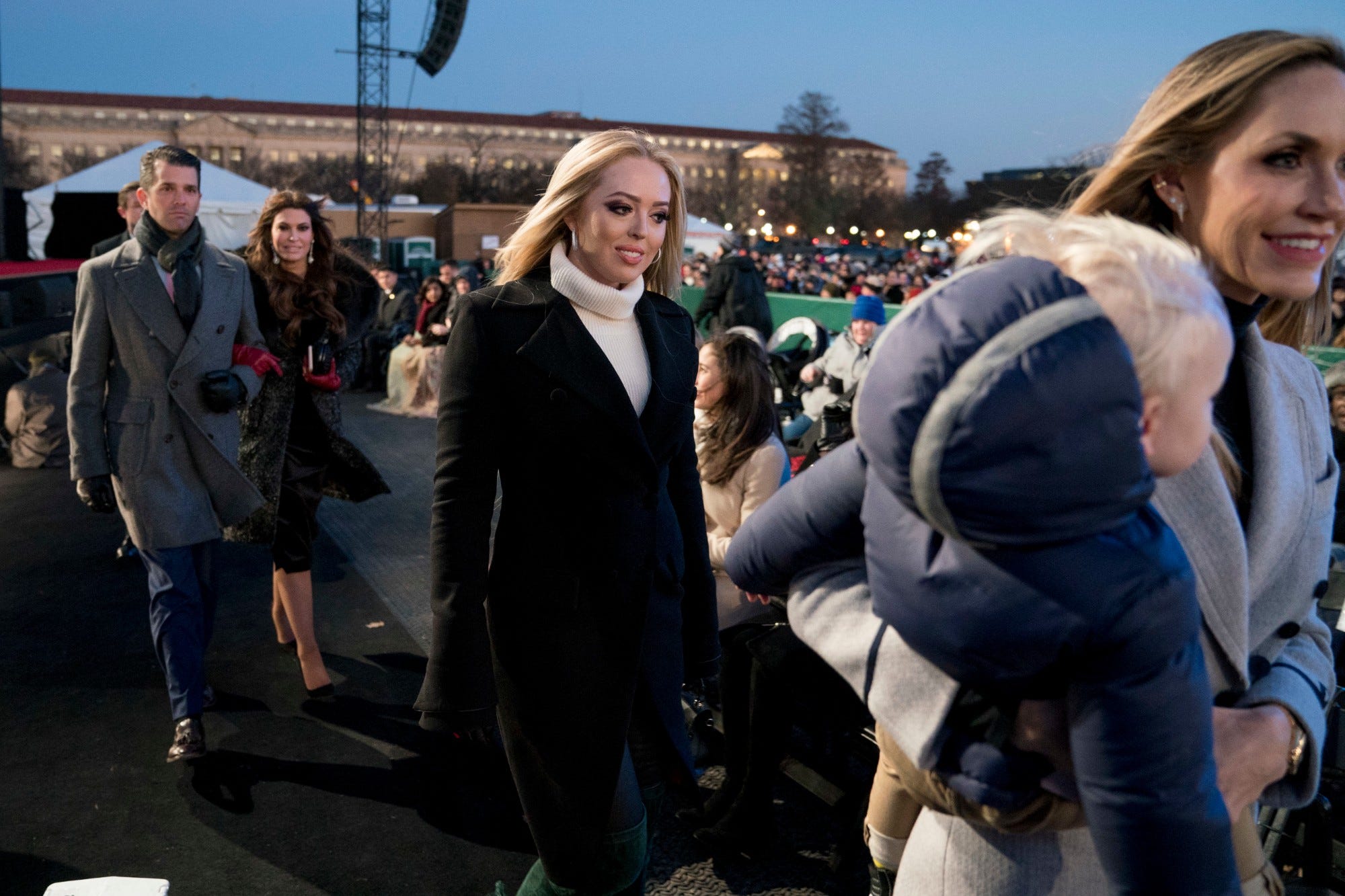 Her close proximity to her father’s administration in the public eye has sometimes put some of her suspected political beliefs under a microscope. 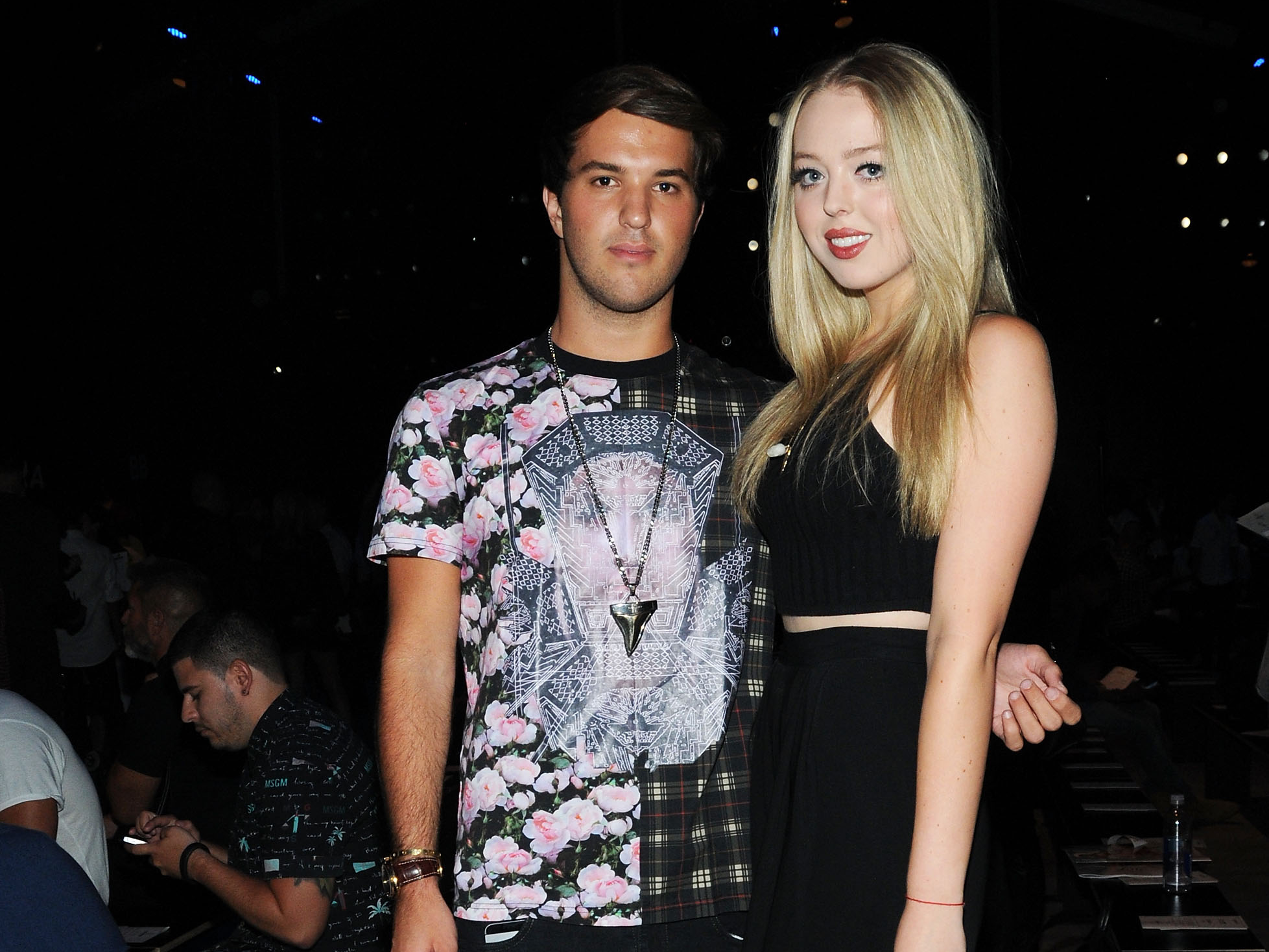 After President Trump’s administration didn’t acknowledge Pride Month for the second year in a row, some were surprised when Tiffany was pictured with her friend, fashion designer Andrew Warren, celebrating Pride in New York City in June 2018.

Tiffany turned heads when she wore white to the 2019 State of the Union, a statement colour that’s connected to women’s suffrage. 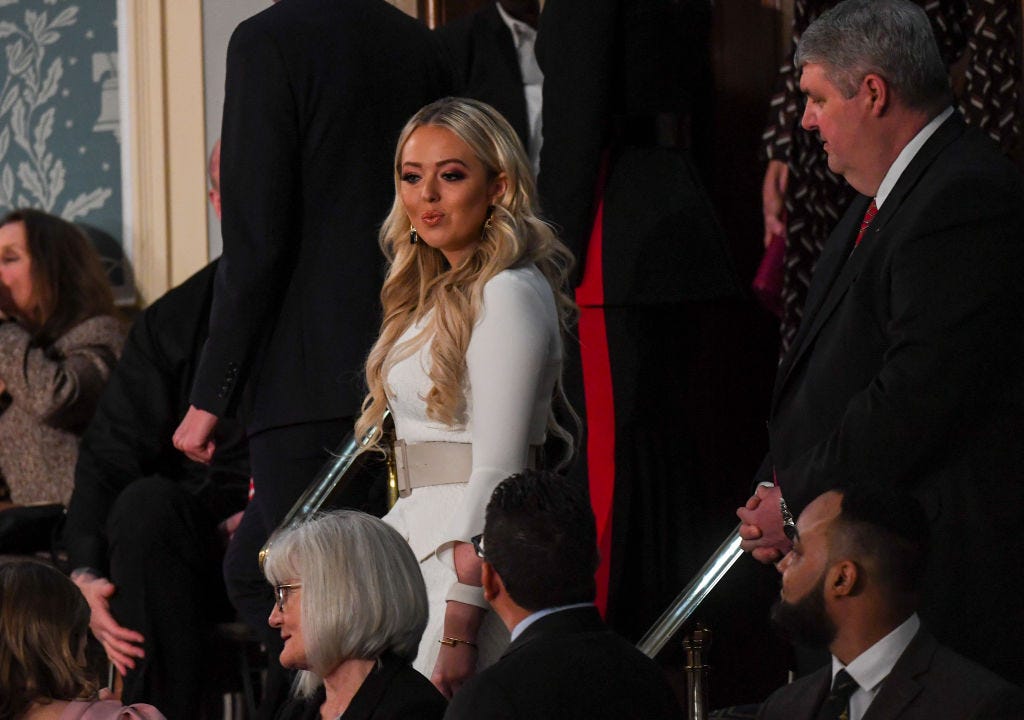 Toni L. Sandys/The Washington Post via Getty ImagesTiffany Trump ahead of the State of the Union address before members of Congress in February 2019 in Washington, DC.

Many lawmakers wore white after Rep. Lois Frankel of Florida, the chairwoman of the House Democratic Women’s Working Group, invited attendees to wear white in honour of the women’s suffrage movement.


Read more:
Tiffany Trump wears white outfit to State of the Union address after Democrats encourage others to wear white in honour of women’s suffrage

Tiffany’s romantic relationship with Michael Boulos, the son of the owners of a multi-billion dollar conglomerate based in Nigeria, has also attracted interest. 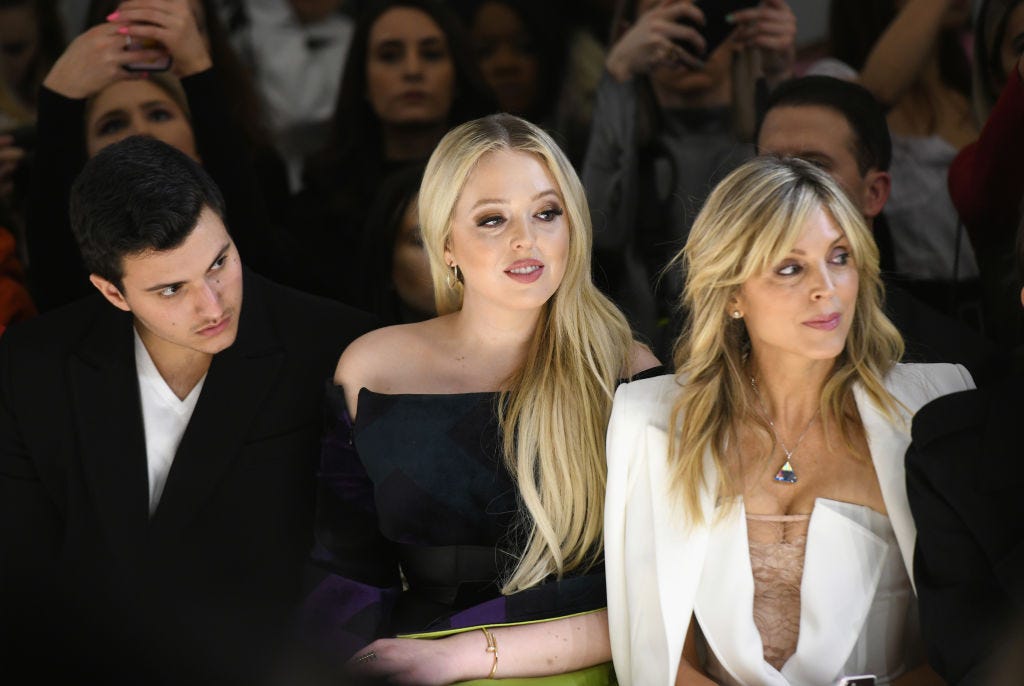 President Trump reportedly stated that parts of Africa were “s—hole countries” in 2018.

Tiffany’s social life also came under scrutiny following reports that a March 2019 trip she took to Belgrade, Serbia, for 10 days cost taxpayers $US23,000. 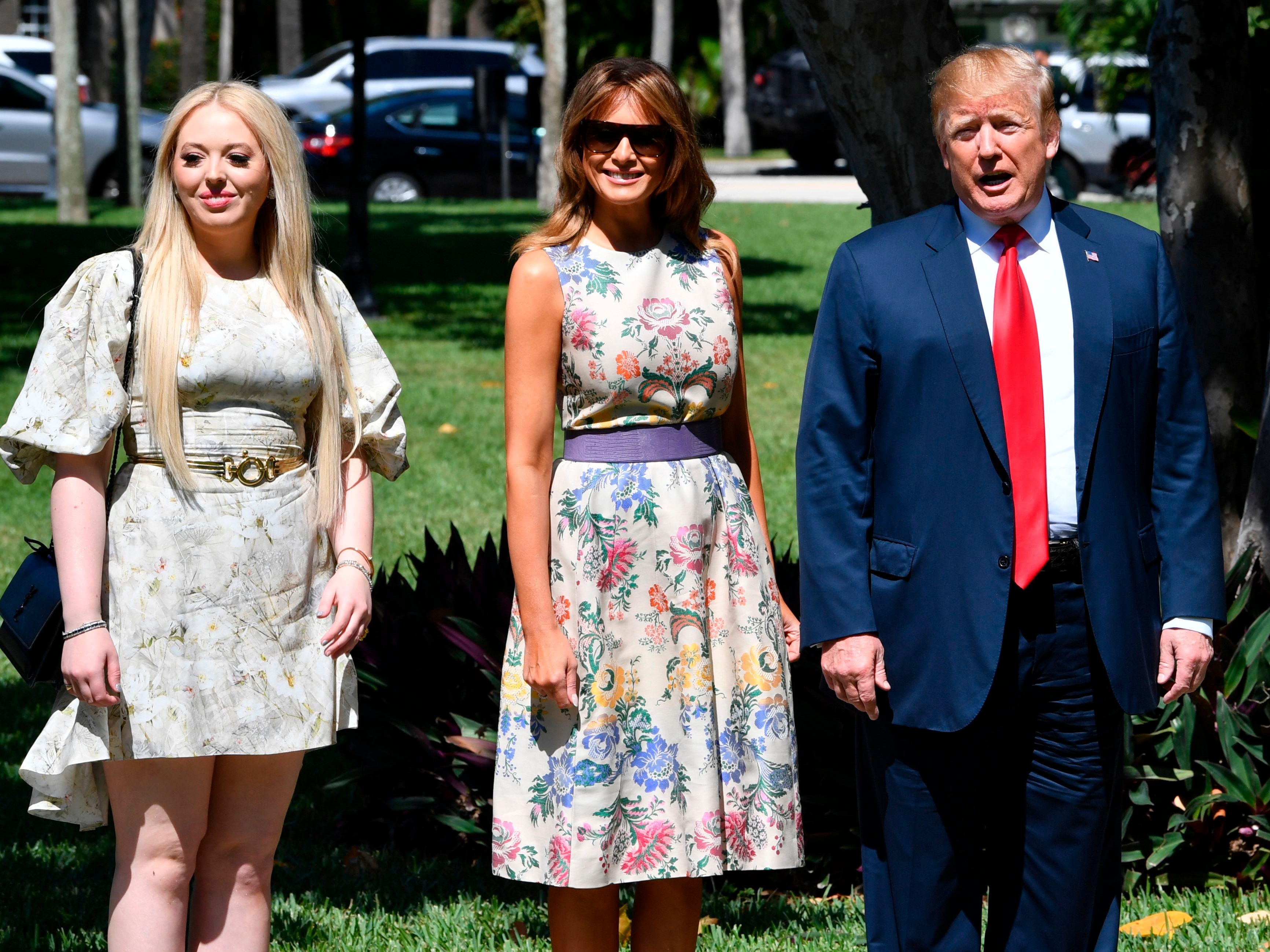 It piled on to the controversy around her father’s many pricey trips to Florida.

Some noticed that though the president publicly wished the US Navy a happy birthday, he didn’t acknowledge Tiffany on her birthday in 2019. 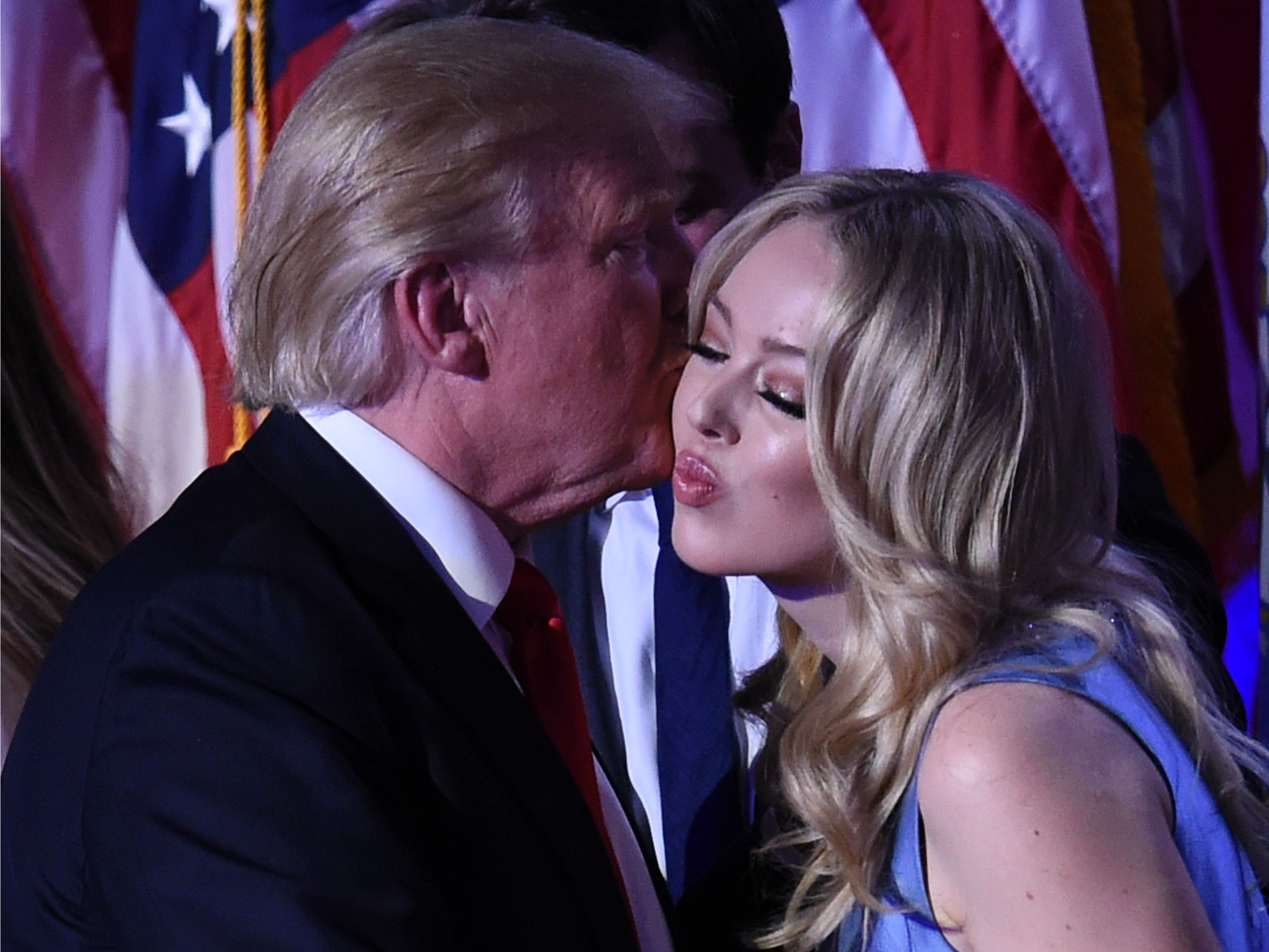 On January 19, 2021, one day before her father left office, Tiffany announced her engagement to Boulos on Instagram. 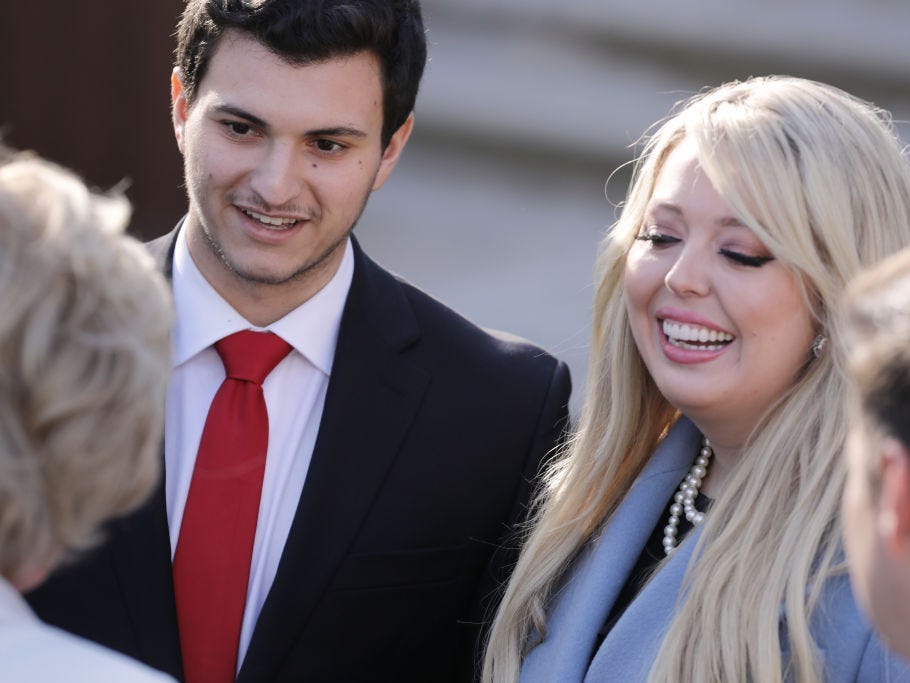 “It has been an honour to celebrate many milestones, historic occasions and create memories with my family here at the White House, none more special than my engagement to my amazing fiancé Michael!” she captioned a photo of her and Boulos standing in the White House’s West Colonnade. “Feeling blessed and excited for the next chapter!”

While some may joke that Tiffany is the forgotten Trump, she has built her own star power over the years. 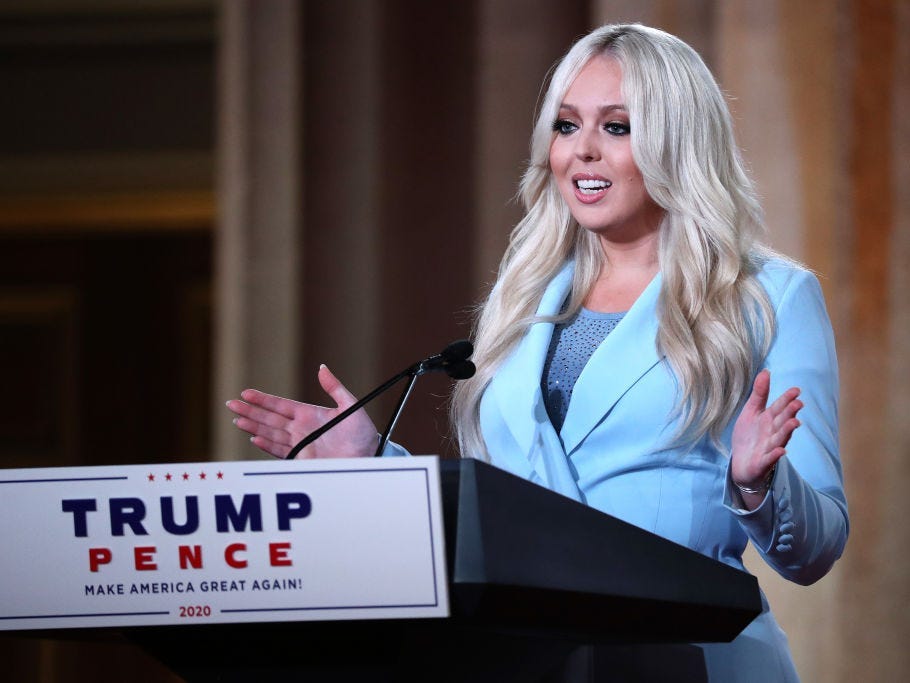 At 27, she has years to make a name for herself.