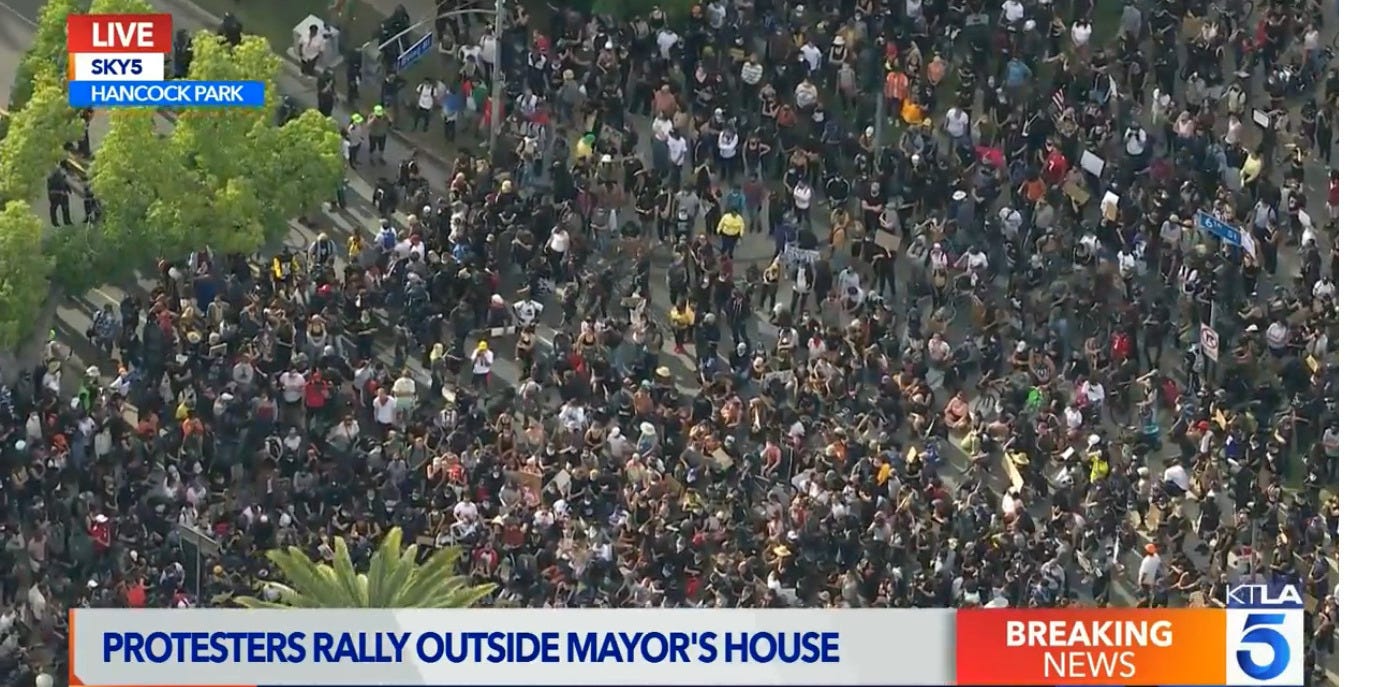 Thousands of people rallied outside of Los Angeles Mayor Eric Garcetti’s residence in Hancock Park on Tuesday to protest racism and police brutality.

“I hear them loud and clear,” the mayor asserted Tuesday night.

Earlier in the day, Garcetti took a knee at a protest in downtown LA amid calls for the firing of LAPD Chief Michel Moore, and chants of “defund the police,” the Los Angeles Times reported. Moore on Monday equated looters with the officers who killed George Floyd in Minneapolis, before walking those comments back.

At a press conference Tuesday night, Garcetti denounced the “lynching” of Floyd and said he respected protesters’ “God-given right” to speak their mind.

The mayor then introduced 16-year-old Davion Pilgrim, an African-American high school student who met with Garcetti earlier in the day. He spoke about being racially profiled by Los Angeles police, who falsely accused him of being associated with a gang.

“We want to make sure that what happened to George Floyd does not ever happen again to someone that just looks like me,” Pilgrim said. “Losing our lives to police officers is one of the biggest fears that we have in South LA.”

Garcetti, in turn, promised that “in the next day or two,” he would be reconsidering policing and budget priorities; under his latest proposal, the LAPD is set to receive $US1.86 billion, an increase of $US120 million. “That’s my simple pledge to you tonight.”

He would not be firing LAPD Chief Moore, Garcetti added, saying: “I’ve known this man’s heart for decades.”

The mayor’s comments came after many of his city’s residents raged at law enforcement, in the streets and on a Zoom conference hosted by the Los Angeles Police Commission.

“We don’t believe you,” one caller told Chief Moore, who had apologised for implicating looters in Floyd’s killing by police.

“We don’t trust the LAPD. We don’t want the LAPD in our city,” they said, adding that police commissioners “should go f— yourselves.”

“Chief Moore, you gotta do a better job pretending you care about this,” another participant said. “If you think curse words are bad, wait until you hear about these 600-plus murders your department has committed over the last seven years.”

Despite hundreds of killings by police in recent years, including the high-profile death of Ezell Ford in 2014, no Los Angeles cop has faced charges over their use of lethal force.