The Global markets are closing for the weekend and we’re bound to have a very slow day – if you are waiting for a Santa Clause rally on today’s trading, you are very likely to be disappointed.  Today is a day for relaxation and reflection. Remember, the words of Jacob Marley, who said:

Marley was a man who worked and worked until the day he died and regretted it every day after.  If you don’t believe in an afterlife and you don’t believe in leaving behind the World a better place than you found it, at least find some time for yourself so people don’t call you “a squeezing, wrenching, grasping, scraping, clutching, covetous old sinner” after you’re gone.

I was inspired this morning by a post on Barry’s site titled “Give and You Will Receive” listing 13 good ways we can all give every day.  ‘Tis the season of giving and goodwill to all man and all that and my children just completed their annual ritual of wrapping up all the toys they are done with to give to children who need them more than they do.  It’s a little thing, but if you want your kids to learn the benefits of charity, actually parting with things they like or liked and physically giving them to kids who clearly appreciate it is much more gratifying than writing a check to some anonymous organisation.  The same goes for volunteering some time (and money!) at a local shelter and helping some people come in from the cold for a nice, warm meal – it makes you appreciate your family dinner a LOT more!

Anyway, end of commercial. Let’s just see who’s being naughty and who’s being nice this morning. We have quite a bit of data today with November Durable Goods at 8:30 (which have been tailing off) along with Personal Income and Spending.  2010 has NOT been an exciting year so far with monthly gains of about 0.4% but, on the bright side, there were only small negative months but this report only covers November and will not give us a very good picture of the holiday season and is, in fact, likely to be front-loaded by the very early Hanukkah this year. We also get Initial Jobless Claims and we’ll see how many Scrooges laid off their respective Cratchits the week before Christmas.

Checking with the Ghost of Christmas Past, we see that last year there were 556,517 jobs lost in the week ending December 26th but don’t worry it’s a humbug as the DOL “seasonally adjusted” the number down to a more palatable 454,000 but that was nothing compared to what they did the next week (1/2) as (and I kid you not) 1,151,891 of our fellow Americans were “adjusted” off the continuing claims data – never to return.  As old Ebenezer liked to say: “They had better do it, and decrease the surplus population.”  Unfortunately, unlike in Scrooge’s relatively charitable times, there are no more Union Workhouses – were the poor were sent to be given work (albeit terrible work).  There is no more Treadmill, there is no more Poor Law until a person in the US has fallen far enough from their employment to qualify for Welfare.

Another neat Government trick is to scale back the total number of citizens seeking employment, this skews all the numbers far lower.  In Dec 2008 there were 134M employable Americans but by Dec 2009 it had dropped to 132M but then the fun began and, as of Nov. 20th, it was down to 126M. Bye-bye 6% of the US labour force, Scrooge would be so pleased…  If you want to play a fun holiday game, go explain to an unemployed person that they’re not really unemployed – they’re just “seasonally adjusted” – expect the conversation to go a bit like this.

Moving on to ghosts of Christmas Present, we have University of Michigan Sentiment for December and that will let us know how merry our surplus population is feeling this month. The non-stop media blitz has been working well and present sentiment has up about 10%, from 78.3 in August to 85.7 in December (preliminary) but the Outlook has been lagging at 66.8 in December’s preliminary estimate vs 62.9 in August:

Our final helpings of holiday data come at 10:30, when we get Natural Gas Inventories along with Leading Economic Indicators and those guys were VERY bullish back on Nov 26th with a report that kicked off the rally from 11,000 as ECRI pronounced “that the much-feared double-dip recession is not going to happen.”   Not to be a Grinch but this is my big problem with chart people – they don’t care HOW you break the levels – as long as you break them.  When this much effort is being made to stimulate the economy, I tend to adjust my chart expectations to account for the expected effect of the bailout/stimulus/POMO rather than get all impressed by jumping over a very low bar that was set under very different economic conditions.

Even in their “bullish” outlook, ECRI said:

Today, the car that is the U.S. economy is crawling uphill, slowing as its engine sputters. With politicians fighting about whether to use a screwdriver or a spanner to fix the motor, the Fed is convinced we’ll end up using neither. Determined not to let the car start rolling back disastrously downhill, yet unaware that the road is about to level off, the Fed is strapping an untested rocket onto the car in hopes of blasting it over the top.

The Fed, looking out the rear-view mirror to steer the car, won’t know when we’re approaching a bend in the road, though we’re now high up in the mountains, with a dangerous abyss below.

So forgive me for not getting all gung-ho bullish last month – I should have stopped when I read the headline or, as I mentioned Tuesday, just let Uncle Rupert report so that I could “decide” properly.  We expected poor goods numbers based on the early earnings reports as well as the Beige Book and we expected disappointing spending as people simply have no money and our Holiday Shopping Survey has painted, so far, a less than robust picture – despite all the media hype to the contrary.  HOV just told us they can’t sell any homes so we don’t expect much there and those unemployment numbers are a joke so we went bearish yesterday in Member Chat with some aggressive shorts.

We had to adjust the NFLX trade idea from the Morning Post because they opened too high and that worked like a charm as NFLX took a nice dive off the opening spike.  We were similarly rewarded with PCLN put plays as well as an aggressive short call (Jan $430s sold at $9.60 finished the day at $7.50 – up 22%) and we even went after AMZN for good measure.  We’re not purposely shorting everything Cramer says to buy but, if I missed anything – please let us know!  We re-established oil shorts as there is just no way demand matches this price ($90.50) despite what an endless parade of “expert” analysts are telling you on television.  So, pretty bearish into the long weekend but we did like C, XLF, HOV and TBT (to hold $38) to the long side.  Not really a mixed bag as our time-frame is for the shorter-term sell-off but, long-term, we like the financials.

Oil we expect to fare no better and the Ghost of Christmas Future (you didn’t think I was forgetting my theme for the day, did you) shows shade of $81 even as the shadows move across the line at $90.  Chris Kringle Kimble has an excellent chart that shows the channel we’re watching on crude and this is another one of those cases where I push my line up higher than the chart guy to account for the ridiculous amount of cheerleading for $100 oil we’re getting from CNBC and other criminal enterprises aimed at bleeding the American Consumer dry and transferring the wealth of our nations overseas – even into the hands of terrorist organisations, while our own government leaders silently drive to the banks to cash their Christmas bonuses from the Energy and Financials lobbyists – who contribute over half of all the money taken in by politicians during the year.  Ho-ho-ho, that joke is on us!

Here’s Chris Kimble’s Nasdaq chart and the futures topped out at 2,239 on the button last night but have pulled back to 2,230 since, just 15 minutes before the open:

One final ghastly visitation and then we can wake up as if it’s all been a bad dream – Jessie’s chart of the Russell and it’s own Ghost of Christmas Past (but already forgotten by the investing public it would seem): 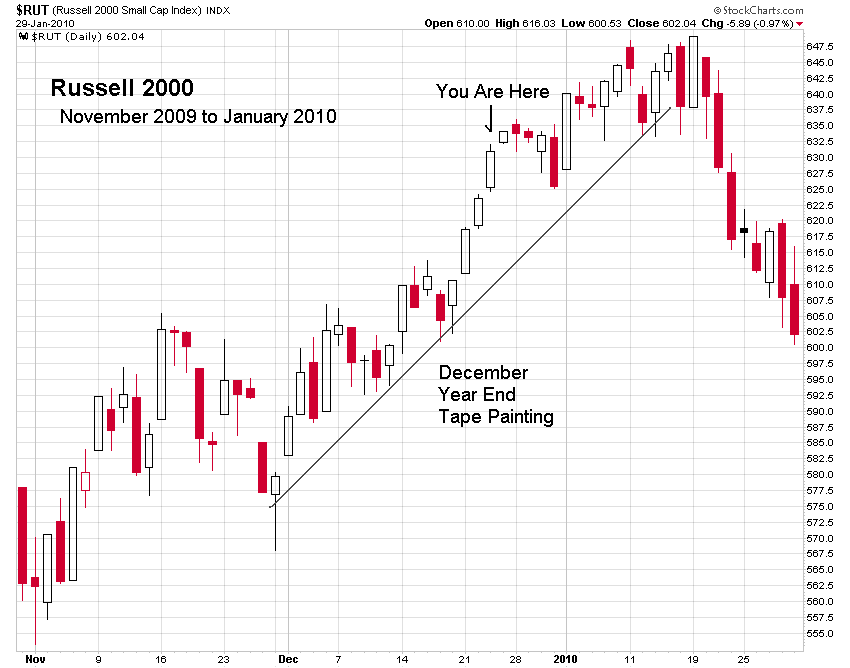 Are those who have forgotten the past condemned to repeat it or has the market, like Scrooge, truly turned over a new leaf and will forevermore keep the bullish Christmas Spirit alive in its heart – heading ever higher, never again to come down.  Ah, there’s a Christmas fable we’d all like to believe in!

Wishing all the best to you and your family this holiday season,