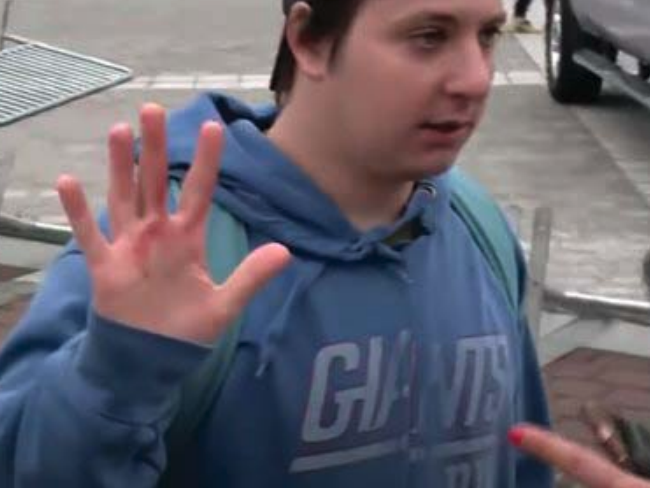 Department of JusticeThomas Baranyi gave an interview where he showed off the blood on his hands and talked about his participation in the insurrection. A screenshot of one interview was included in the FBI affidavit supporting the charges against him.

The man who stood next to Ashli Babbitt, the woman who was killed by police while storming the US Capitol building, was arrested Tuesday night.

Thomas Baranyi, 28, had participated in the insurrection himself, according to a sworn statement from a member of the FBI included in court filings obtained by the George Washington University Program on Extremism. He was arrested in New Jersey on charges of trespassing into the Capitol building and interrupting the work of Congress.

Babbitt, a 14-year US Air Force veteran, was the first of five people to die in connection with the insurrection. She was an ardent supporter of President Donald Trump and a QAnon conspiracy theorist who frequently posted baseless conspiracy theories on social media. Law enforcement officers shot her as she entered the Capitol building.

Baranyi was seen next to her in videos and photos of the incident. He gave an interview with a news reporter after the killing, showing the reporter the blood on his hands.

“[W]e had stormed into the chambers inside and there was a young lady who rushed through the windows,” Baranyi told a reporter cited by the FBI affidavit. “A number of police and Secret Service were saying get down, get out of the way. She didn’t heed the call and as we kind of raced up to try to grab people and pull them back, they shot her in the neck, and she fell back on me.”

Baranyi was released on an unsecured bond after making a court appearance via video, according to the Associated Press.

The insurrection at the Capitol building followed a rally several miles away in Washington, DC, where President Donald Trump falsely said the 2020 presidential election was marred by widespread voter fraud and that he was the true victor. He told his supporters to “fight” for him as Congress confirmed President-elect Joe Biden’s election victory in the Capitol building.

Baranyi said he personally participated in the storming of the Capitol building to stop Congress from counting the electoral college votes for Biden.

“We tore through the scaffolding, through flash bangs and tear gas, and blitzed our way in through all the chambers just trying to get into Congress or whoever we could get in to and tell them that we need some kind of investigation into this,” he said, according to the FBI affidavit.

The charges against Baranyi are among the Justice Department’s 160-plus investigations into participants of the Capitol siege.