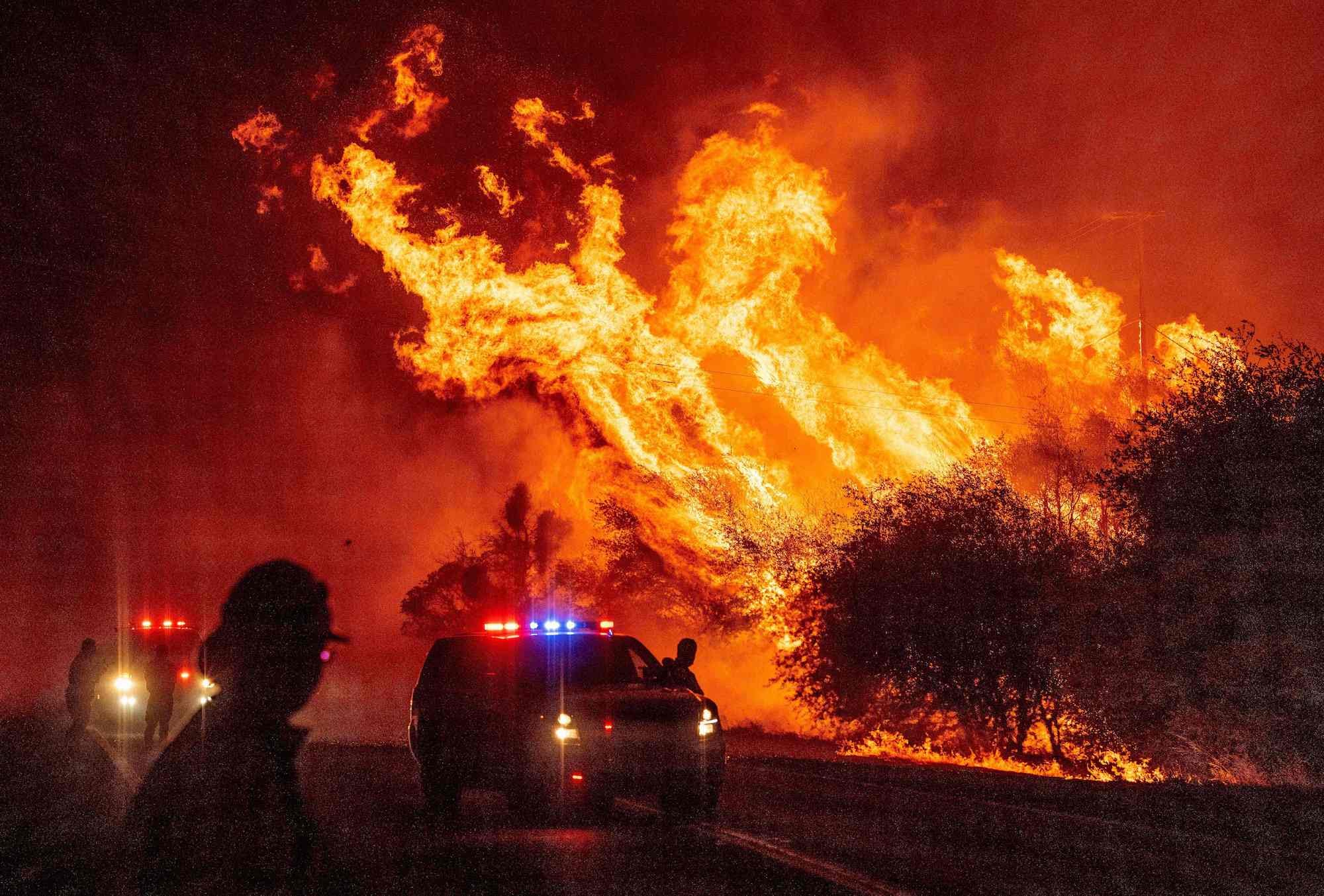 Josh Edelson/AFP via Getty ImagesA law enforcement officer watches flames launch into the air as fire continues to spread at the Bear fire in Oroville, California on September 9, 2020.

As 2020 winds to a close, firefighters are still struggling to contain three active California wildfires.

These three wildfires are part of the more than 57,000 that occurred this year, according to the National Interagency Fire Centre, which tracks wildland fires.

As of December 23, these tens of thousands of wildfires have scorched more than 10.3 million acres, a record-high in at least a decade. Burned acres in the United States has not reached double-digit million figures in the last 10 years, according to the agency.

Last year, about 4.5 million acres were burned down because of about 49,000 wildfires.

The 10-year average, according to the NIFC, is 6.7 million acres burned and about 61,000 total wildfires.

California made up about half the acre burnage. About 4.1 million acres have been burned this year in California, as of December 18, according to the California Department of Forestry and Fire Protection. Over 10,000 structures were damaged, and 31 people died.

Today, there are still three fires raging in the state. Two began months ago, and the third began just two days before Christmas.

A creek fire in Contra Costa county is proving especially difficult for firefighters to contain. Since it broke out on May 30, firefighters have only managed to contain about 50% so far, according to data from CalFire.

The one that broke out right before Christmas is 65% contained so far but has already scorched up more than 4,200 acres. And a fire in San Luis Obispo county that began in August is almost 100% contained, CalFire reported.

Six of California’s fires this year landed on Cal Fire’s list of the 20 largest fires in the state of all time.

More than 2 million properties are either at high or extreme risk to wildfires, according to risk analysis from Verisk Analytics.

According to Verisk’s 2019 Wildfire Risk Analysis 4.5 million U.S. homes were identified at high or extreme risk of wildfire, with more than 2 million in California alone.

About 85% of all wildland fires in the United States are human-caused, according to the US Forest Service Research Data Archive. Humans might leave campfires unattended, for example, or improperly discard cigarette butts.

The remaining wildland fires are on average caused by natural phenomena, such as lightning, according to the National Park Service.

The US Geological Survey, a federal agency that studies the country’s natural resources, says there is no direct relationship between climate change and fire. But historically, the USGS says, researchers have correlated higher temperatures with larger fires, and there is an expectation that as global warming intensifies, fires will occur more frequently.