I have now read William Cohan’s Vanity Fair “expose” on the folks suing Huffington Post founders Arianna Huffington and Ken Lerer over an ownership stake in the company.

Here’s my take: The lawsuit is completely bogus.

And here’s my other take: Everyone in the startup community had better hope the plaintiffs in this case walk away with nothing–ZERO–or this after-the-fact I-want-a-piece-of-your-success legal blackmail is going to become a trend.

Now, let me begin by saying that I am friends with Ken Lerer and Arianna Huffington and that Ken Lerer is an investor in Business Insider. So if you want to conclude that I’m just shilling for them, fine. I think this case is important for far more than the Huffington Post, and I think that everyone in the business community should pay attention to it (and worry about it).  But go ahead and shoot the messenger.

The full Vanity Fair article is here, and Glynnis MacNicol has a good summary here.  Here’s an even shorter summary:

Six years ago, two Democratic party operatives drafted a plan for a political web site called 1460.com. They described the idea to Arianna Huffington, hoping that she might lend her personality to the project. Shortly thereafter, Arianna hosted a big meeting at her house with bigwig Democratic celebrities, to which the operatives were invited. According to Vanity Fair, the operatives did NOT discuss their web site idea at this meeting. They merely said that the Democrats had to be less pathetic about using the Internet.  The next day, the operatives had breakfast with Arianna Huffington and Ken Lerer, and at the breakfast, they discussed their web site idea. After the breakfast, the operatives continued to refine their idea. Meanwhile, Lerer and Huffington began developing the Huffington Post and hired people to work on the project (including the raging conservative Andrew Breitbart, who now says he founded Huffington Post).  For the next six years, the operatives happily blogged for Huffington Post and touted the site on TV. Then, a few months ago, they suddenly said that Huffington and Lerer had violated a contractual agreement to work together on the project and swindled them out of their stake.

(Ironically, the operatives say that what caused them to suddenly get mad was not the success of the Huffington Post, but Andrew Breitbart’s claim that HE founded it.)In any event, legally and morally, the only event that could possibly matter in this saga is the breakfast the operatives had with Lerer and Huffington.

The operatives say that at the end of this breakfast everyone stood up, shook hands, and AGREED TO WORK TOGETHER on the project.

A source familiar with Lerer-and-Huffington’s recollection of this breakfast says that THIS CLAIM IS B.S.  Not only was there no agreement to work together at the breakfast, the source says, there wasn’t even an agreement to keep talking. The handshake was just a nice-to-meet-you-and-talk-about-these-ideas (which, by the way, were hardly new: Everyone and their brother was talking about building a left-wing version of Drudge Report in those days).

Leaving aside the disagreement about what was actually said at breakfast, if EVERYTHING the operatives say is true, should this entitle them to a stake in the Huffington Post?

In my (non-legal) opinion, absolutely not.  People talk about business ideas all the time.  If, after talking about ideas, people decide to actually go into business together, they sign contracts.  This is especially true when people are founding businesses together.  If there were no need to sign contracts–if verbal agreements were binding–why on earth would people waste time and money paying lawyers to draw up contracts?Now, a partner at a major corporate law firm tells me that there are some circumstances in which a verbal agreement can be considered a “contract.” For that to happen, however, the verbal agreement has to be more than a vague agreement to work together. It has to be a clear delineation of what, exactly, is being agreed to, what the mutual consideration is (money, equity), and so forth.  It seems highly unlikely that the parties in this case could or would have hammered out such a verbal contract in a single breakfast. But in any event I have never met any business person who has ever suggested that a verbal agreement to work together is any way a binding contract.  (Except after the fact, when people wish they had signed contracts).

And, by the way, it’s actually GOOD that such verbal agreements aren’t “contracts.” Because, as is the case here, people tend to remember what they want to remember, and relying on recollections of verbal agreements would turn every business transaction into a litigious nightmare.

(This is important, and anyone who is involved in starting companies or investing in startup companies should pray hard that the case is instantly dismissed. Because if folks like the Winklevoss twins (Facebook) and the Democratic operatives can get tens of millions of dollars in settlement money from successful companies merely because they can prove that they had similar ideas and had some conversations with the founders in which there may or may not have been verbal agreements to work together, there are soon going to be hundreds of these lawsuits.)

What this case boils down to, in my mind, is not a legal issue but a moral issue.  Specifically: Were Ken Lerer and Arianna Huffington straightforward with the operatives, or, like Mark Zuckerberg in the Facebook case, did they string them along while secretly building their own competing site?

Based on the evidence I’ve seen thus far, as well as the conversation with the source familiar with Lerer and Huffington’s take on the events, the answer is this:

I have seen no evidence that Huffington or Lerer acted in bad faith or were anything other than straightforward with the plaintiffs.

Having breakfast with someone to talk about working on a business idea together does not in any way obligate anyone to work together.  The “business idea” in this case, moreover, was not a unique idea: In those days, EVERYONE was talking about starting a left-wing Drudge.  Unless Huffington or Lerer gave their word at breakfast that they would work with the operatives–and then secretly went back on that word without being straightforward about it–there’s not even a moral issue here, let alone a legal one.

And this, for me, is the kicker: If someone had promised me that they loved my idea and looked forward to working with me on it–and then STABBED ME IN THE BACK, STOLE MY IDEA, and SWINDLED ME OUT OF MY STAKE–I sure as hell wouldn’t help them build the business by cheerfully blogging for the project for six years.

Instead, I’d send a letter or email making my anger clear immediately.

So why didn’t the plaintiffs do that?

Probably because the whole thing is completely bogus. 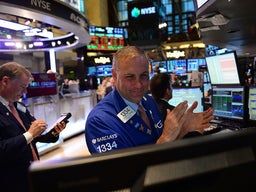