From wild dogs to stolen chairs, here are 10 things that went wrong with my disastrous wedding 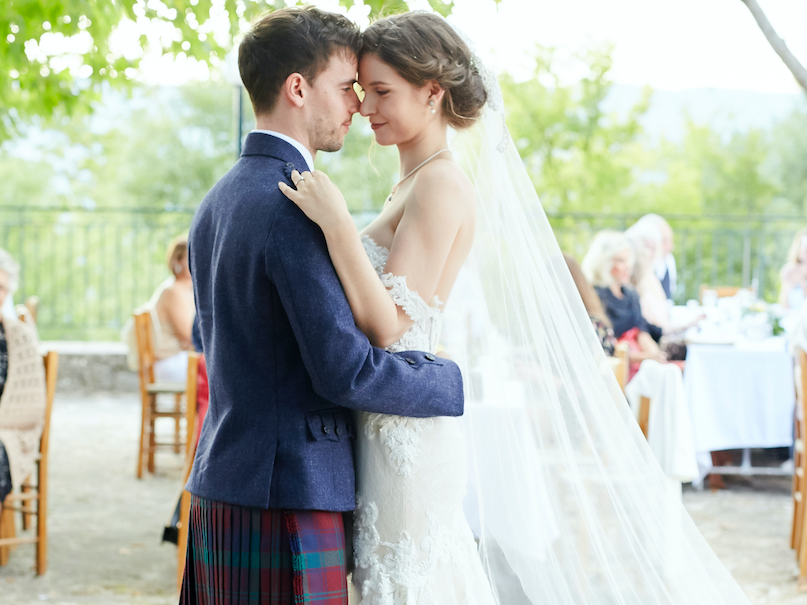 Alexandra EleftherakiMy husband and I on our wedding day in 2019.

My husband and I were married in the Greek village of Krapsi in the summer of 2019.

Our wedding day was not the happiest day of my life. It’s not even in the top 20. It ranks somewhere between the time I won a lawn chair in a raffle and the day I discovered you can buy pre-chopped onions.

I love being married to my incredible husband, but our wedding felt far from a celebration.

Read on for an account of everything that went wrong with my wedding, and why I think having a disastrous experience made us slightly better people. 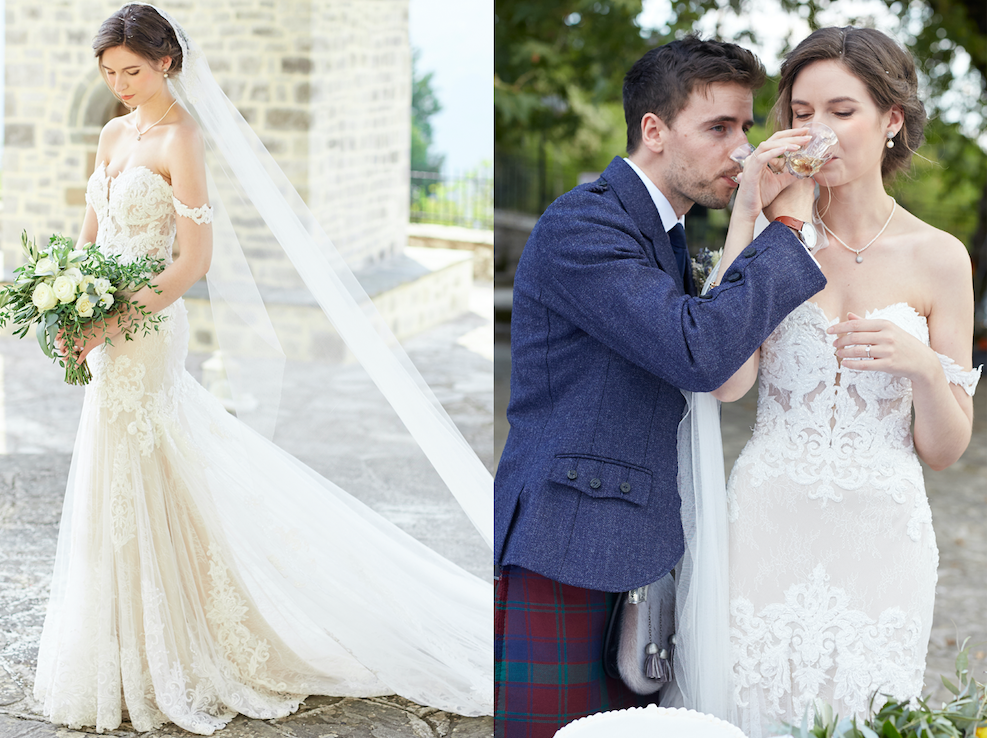 About 48 hours after handing over an eye-watering and nonrefundable deposit on my wedding dress, I realised I actually preferred a different gown.

Before shopping for dresses, I had envisioned myself walking down the aisle in a minimalistic dress with long sleeves. I somehow ended up buying a sleeveless gown with more sequins and beading than a parade float.

The experience taught me to listen to my gut instincts, and that I can apparently be flattered into buying thousands of dollars worth of tulle.

In the end, wearing the “wrong” dress didn’t really matter. I felt beautiful on my wedding day, and secure in the knowledge that my rhinestone-encrusted bodice could probably stop a bullet.

I’m Greek-American and was baptized into Greek Orthodoxy as a baby. Despite not having strong religious beliefs of our own, my husband and I wanted to have a traditional Greek wedding ceremony.

Greek culture and Greek Orthodoxy are so intertwined that I felt it would have been impossible to have the wedding we wanted without my husband converting to Greek Orthodoxy.

We expected his conversion to involve a few meetings with a priest and a smattering of paperwork.

Instead, we were required to attend evening vespers (evening prayer services) multiple times a week, for months. We also went to Divine Liturgy every Sunday, underwent confession, and attended weekly seminars on Orthodoxy.

However, we were still not prepared when my husband was unexpectedly dressed in nothing but a filmy white gown in a room of strangers, covered in holy oil, and repeatedly submerged in an enormous plastic bin.

I believe that love means happily inconveniencing yourself for someone else, so this was the most romantic baptism I’ve ever attended.

We had no wedding cake 48 hours before the ceremony

Early in the planning process, we decided that my husband would be totally responsible for one thing: the wedding cake.

Two days before the reception, it came to light that we had no cake.

At a local bakery, I tried to communicate what we needed in my shaky Greek. I found myself pointing to cake-like items in the display cases and asking, “Can you make this big and fast?”

We eventually ended up with a white, presumably vanilla cake that I couldn’t pick out of a lineup. We didn’t see or taste the cake before the wedding, and I honestly have no idea if it was even served.

The cake crisis has given me a tremendous sense of personal capability. If I can conjure cake for 100 people a mere two days before a wedding, I can definitely handle doing my own taxes.

The bus carrying our guests got lost in the mountains

Since I’m Greek-American, and my husband is Scottish, we had to import a lot of our wedding guests.

We planned to use a coach bus to transport visiting guests to the ceremony, which was an hour into the mountains.

We’d been assured that the coach driver was familiar with the area, but he quickly got lost and didn’t know how to use a GPS.

Guests ended up using Google Maps and hand gestures to steer the bus along narrow cliff roads, eventually making it to the wedding.

The ceremony started significantly behind schedule, but punctuality is almost impolite in Greece, so no one seemed to mind.

And we learned that our friends are resourceful, patient people who can be relied upon in a crisis, even if that means paying exorbitant rates for international phone data. 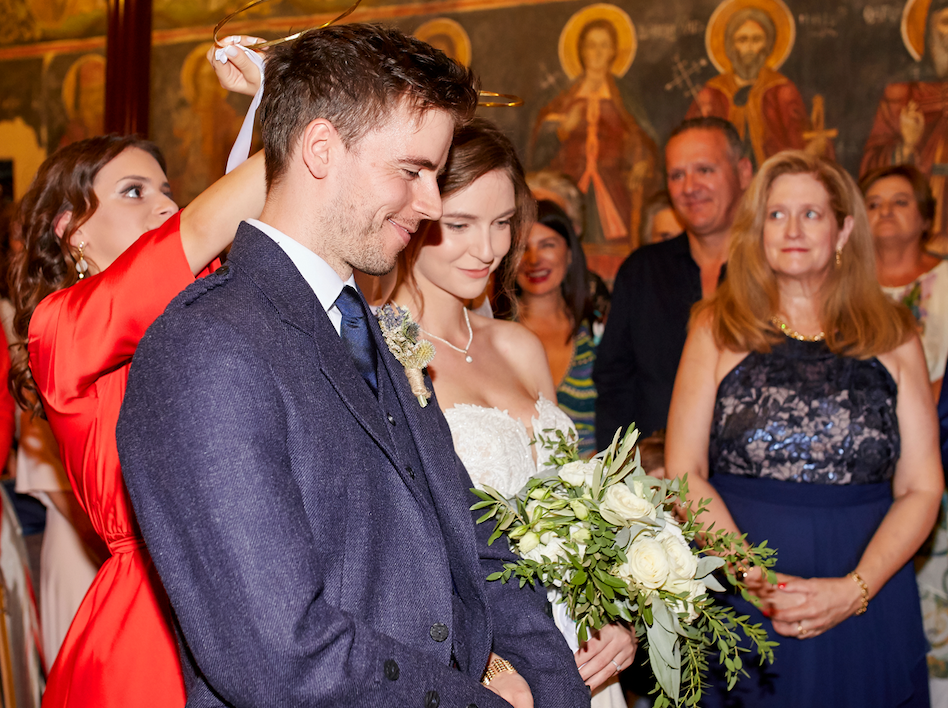 Alexandra EleftherakiMy husband does not speak Greek. The ceremony was in Greek.

My husband speaks no Greek, other than the few words he uses to compliment my grandmother on her moussaka.

Given this, we were relieved to be told our priest would be able to do much of the wedding ceremony in English.

But upon arriving at the altar, we realised that the priest spoke no English at all and that the ceremony would be entirely in Greek.

My husband didn’t understand a word of his own wedding. For all he knows, we could have been negotiating the price of a used car.

I’m fairly certain that when I whispered to my husband that it was time for us to kiss, he was counting the floor tiles.

But in hindsight, there’s nothing like knowing your spouse literally could not comprehend his wedding vows to convince you that his commitment comes from the heart.

The seating chart failed and the guests resorted to desperate measures 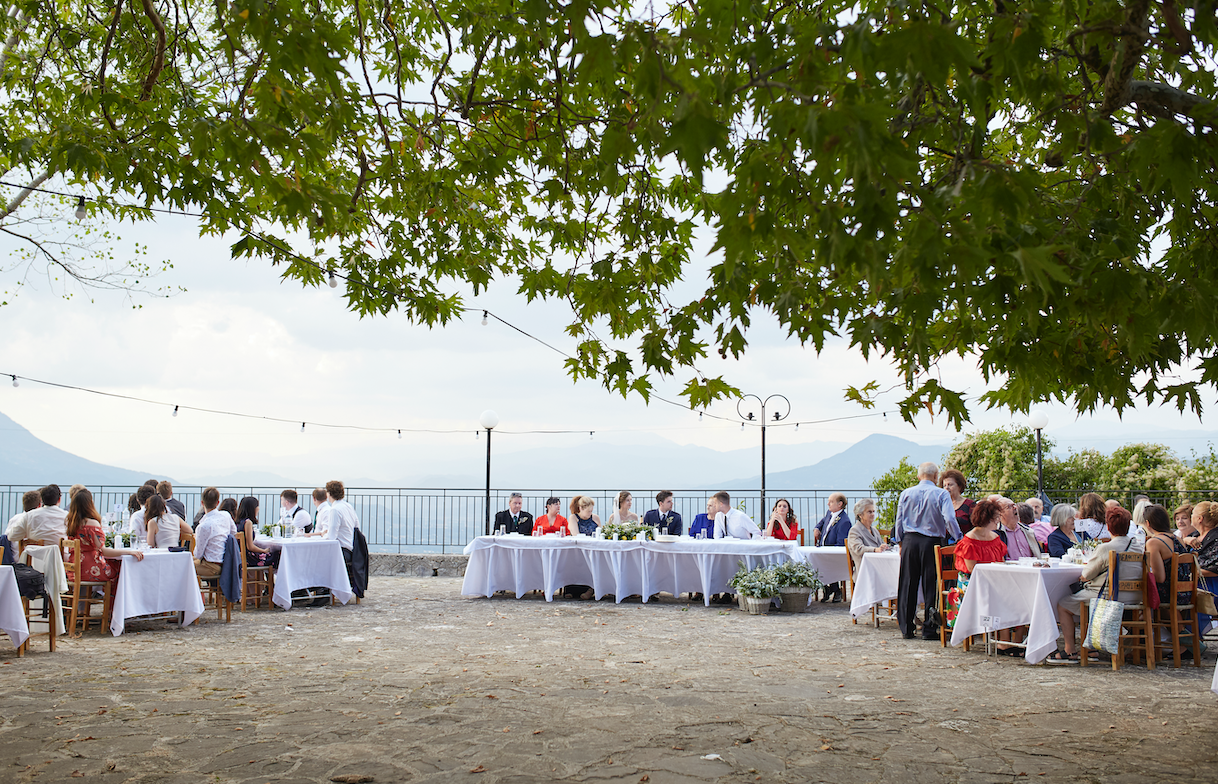 Alexandra EleftherakiThe tables and chairs we had didn’t match the ones in our seating chart.

By Greek standards, our guest list was microscopic. We had about 100 people at our wedding, and all of them had assigned seats marked on a chart displayed at the reception.

Unfortunately, the tables depicted on the chart looked nothing like the ones at the reception.

The tables on the chart were round and seated eight. The tables at the reception were rectangular, randomly arranged, and seated anywhere from six to 14 people.

This led to a general state of chaos and lawlessness. One enterprising group of guests stormed the local taverna and carried out a folding table and chairs. Others plucked furniture from the unguarded yards of local villagers, all of whom we’d invited to the wedding.

Some guests failed to find seats at all and wound up sitting on nearby boulders, balancing their dinner plates on their laps.

We still don’t know how this happened. But it did teach us that the best-laid plans can sometimes go awry.

Our reception was cut short by a lightning storm 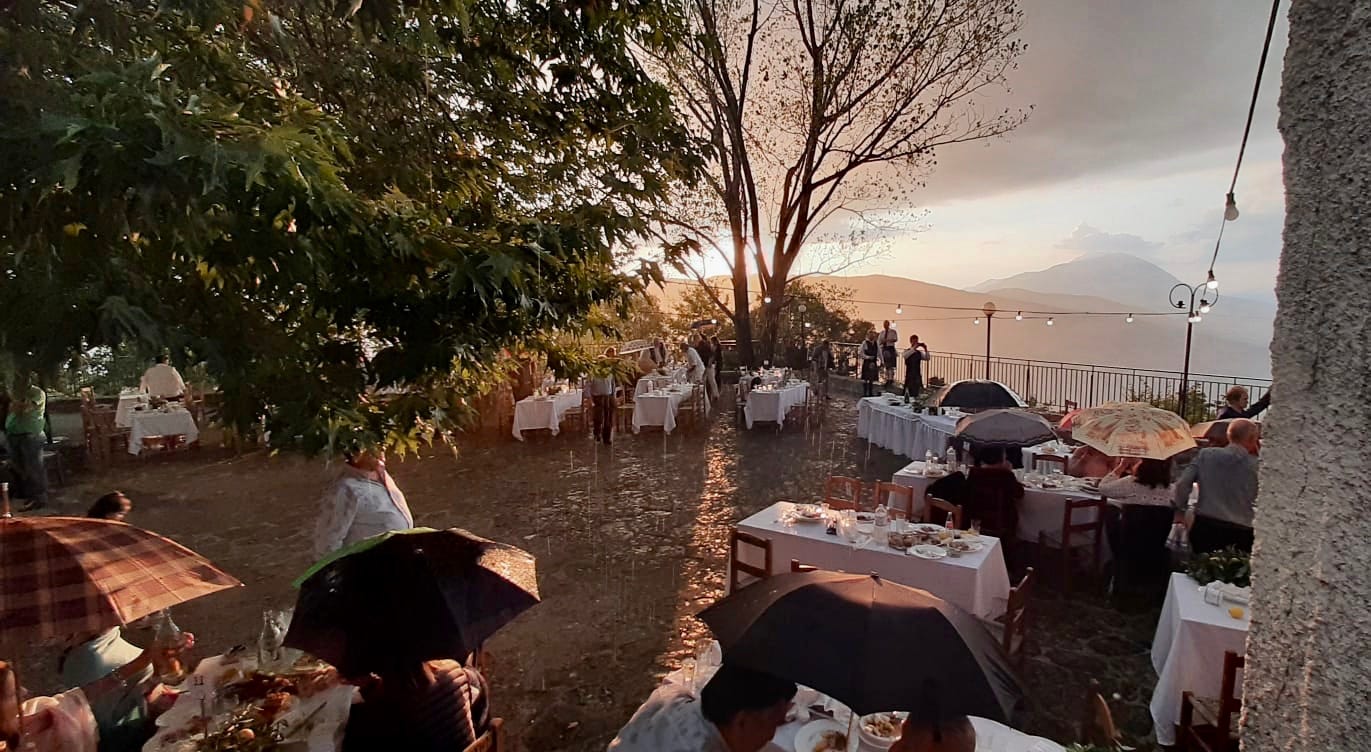 Sophia Mitrokostas for InsiderA lightning storm broke out during our outdoor reception.

Our reception was held outdoors in the village square. As even late summer weather in Greece tends to be hot and dry, we hadn’t planned for rain.

Thirty minutes into the reception, thunder was booming and black clouds loomed ominously. And just as the food was served, it began to rain.

At first, guests pretended to hardly notice as they discreetly sheltered their plates with their hands. When drops started falling more thickly, umbrellas blossomed over tables.

We managed to get through a frantic lightning round of traditional dances before literal lightning struck the opposite mountainside. The heavens opened, flooding the tables and scattering guests.

The party was eventually moved to the local taverna. In a large room furnished with a few plastic tables and chairs, guests ate leftover food off of paper plates and drank whatever could be found in the taverna’s storeroom. 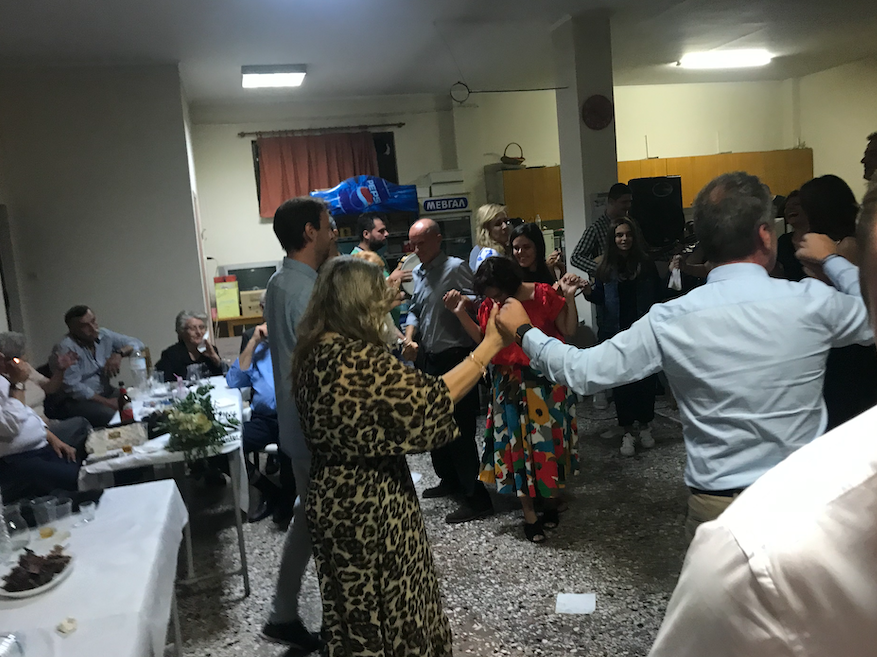 Sophia Mitrokostas for InsiderMy guests made the most of the indoor space.

This rained-out reception taught us that things will go terribly wrong at the worst possible time and that no matter how much you’d prefer to crawl under a sodden tablecloth and hide, you’ll be expected to smile and make small talk through it all.

I had to wrestle my wedding dress away from wild dogs

In Greece, it’s traditional for the bride and groom to leave the reception before the guests. Given that most of our guests had nearly drowned during dinner, my husband and I certainly weren’t the first to go.

When we did eventually leave, we realised that we’d need to trek through a lightless forest down a steep, stony path to where my husband had parked the car.

Ten minutes into our hike, we heard howling and saw three wild dogs peering at us out of the dark. One of them rushed towards us, grabbed the hem of my wedding dress, and began pulling.

At that point in the evening, it was almost a relief to be set upon by wild beasts. However, we managed to wrestle my dress free and the dogs eventually wandered away.

Though we never felt like we were in real danger â€” the dogs seemed more curious than bloodthirsty â€” it was a surreal experience that’s helped put everyday struggles in perspective.

However bad things get, at least I’m not fighting off wild dogs in a corset.

The priest turned out to be an imposter of sorts

The morning after our wedding, my uncle called our hotel room to inform us that the priest who had married us was not an active clergyman.

He had once been the village priest, but had retired from the priesthood years earlier and was thus incapable of performing a wedding.

As our flight home was the following day, we would need to immediately find another priest and get remarried.

Luckily, priests are thick on the ground in Greece â€” one of my uncle’s drinking buddies turned out to be one. We met him at a local cafe, where he happily remarried us over iced coffee.

This was a reminder that our lavish wedding was just window-dressing for something that really only required me, the person I love, and a small battalion of priests.

Our marriage licence blew away on a mountaintop 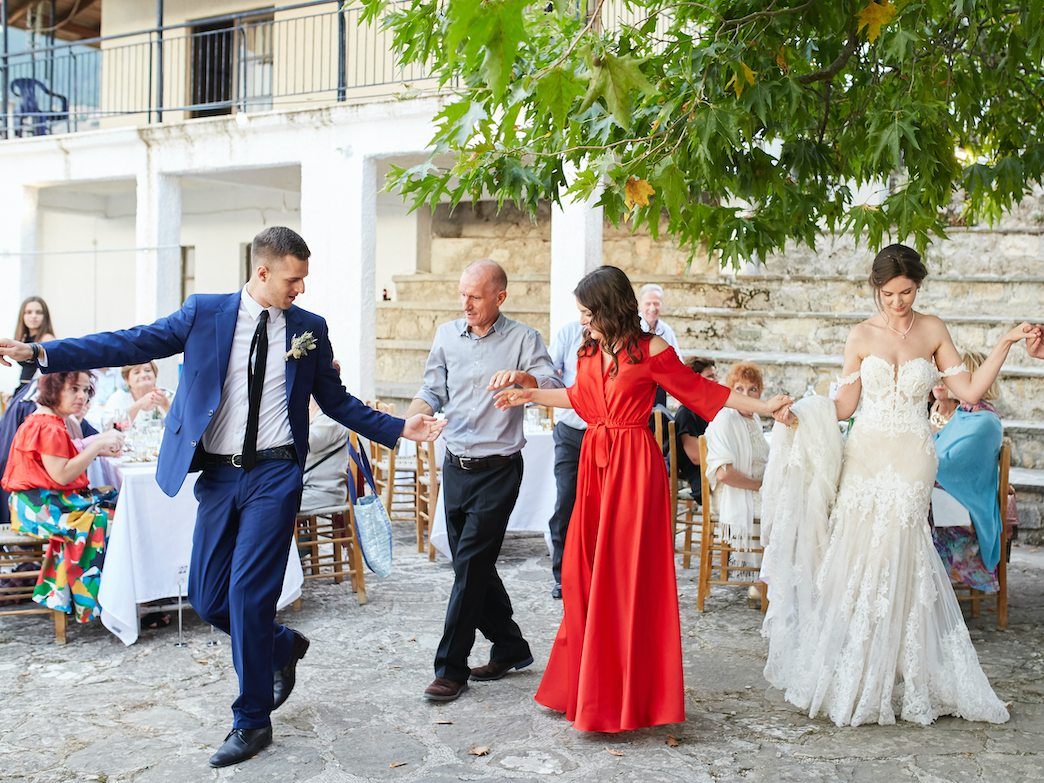 Alexandra EleftherakiI learned that getting a copy of a marriage licence is no easy feat.

The same day that we were remarried, we learned that the family member in possession of our civil marriage licence had lost the paper at the wedding. Apparently it blew away off the mountain.

The process of acquiring a new copy involved visits to at least five different local government offices, staffed by some workers who looked like they wished they were the ones blown off a mountain.

One year later, we’re still trying to make our marriage official in Greece. I’m cautiously optimistic that the paperwork will come through before our grandchildren graduate college.

8 signs that a marriage will or won’t last, according to wedding experts

10 questions you should ask someone before marrying them