'The Walking Dead' has been hinting at Beta's mysterious identity since last year. Here's every clue you may have missed. 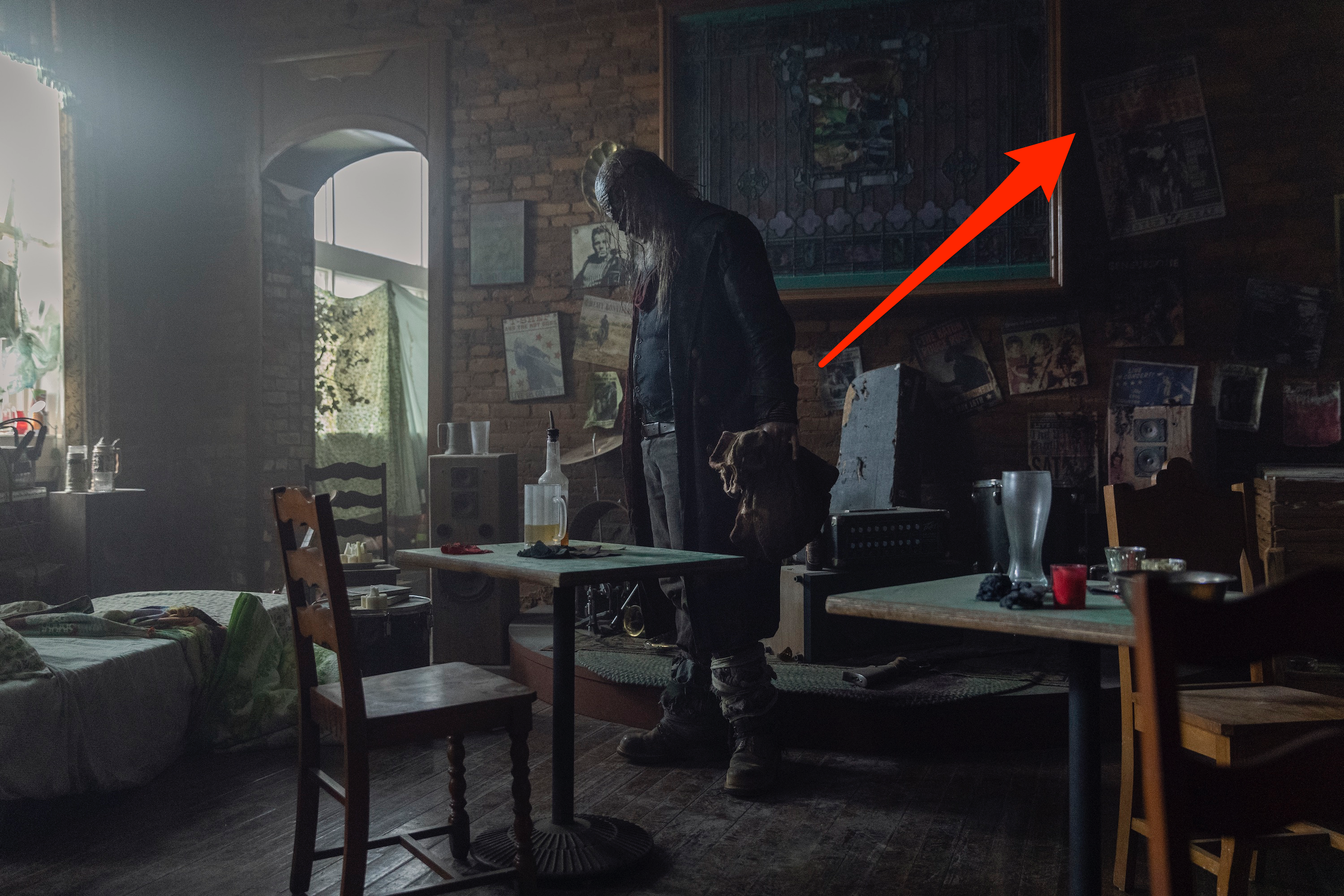 Ryan Hurst’s “The Walking Dead” character, Beta, hasn’t taken off his mask on the show once since joining the zombie series on season nine.

As a result, the show created a giant mystery around Beta’s identity before the apocalypse. On Sunday’s episode, viewers finally received a concrete answer about who he was before marching with Alpha and the undead.

While mourning the death of his Whisperer leader, Beta visits a hotel full of guitars and vinyl. One of the albums has his face on them next to the words “Half Moon.” It turns out Beta was a country singer. Showrunner Angela Kang told Entertainment Weekly Half Moon was the name of Beta’s album and not his actual name before the zombie apocalypse.

The reveal is a twist from the comics where Beta is revealed to have been a famous basketball player before the outbreak. Hurst previously told Insider he helped come up with the backstory for his character on the show.

“When I first met with Angela [Kang], the showrunner, she thought that I would have an aversion to having the mask on all the time,” said Hurst after joining the series in March 2019. “And I was like, ‘Well, let’s talk about that.’ Because, in the comic book, he does not take off his mask. And the reasons why are never really fully explored.”

“I think that that’s such a beautiful enigma of what happens to a person after the end of the world when they decide to don the skin mask of a dead human being and keep it on all of the time,” Hurst continued. “It’s such a beautiful mystery of who and why does somebody decide to do that. And I think you only lessen things if you have him take off the mask.”

Hurst said he helped come up with the character’s altered backstory for the show.

“We came to a consensus. I had a really wild idea that I brought to the table, and we had a few meetings about it, and where we landed is somewhere I’m very happy about,” said Hurst.

On “Talking Dead,” Hurst said he imagined that someone broke into his home and he defended them, killing the intruder. He then saw the person he was killing was wearing his band’s T-shirt and that really affected him.

“That would be a reason why somebody would cloak who they were for the rest of the apocalypse,” said Hurst on “Talking Dead.” “He was going to let the life that he led before the apocalypse continue to inspire people, but he had to kill people in the meantime then he was going to do that also.”

If you’ve been paying close attention to “TWD” universe at large, you may not have been surprised by Beta’s reveal. Clues about Beta’s musical background have been dropped on both “TWD” and “Fear TWD” since last year.

Insider rounded up some of the clues you may have missed. Though you may have caught some, even eagle-eyed viewers probably missed at least one big clue along the way.

A record showing Beta’s face can be seen on an episode of season five of “Fear the Walking Dead.” 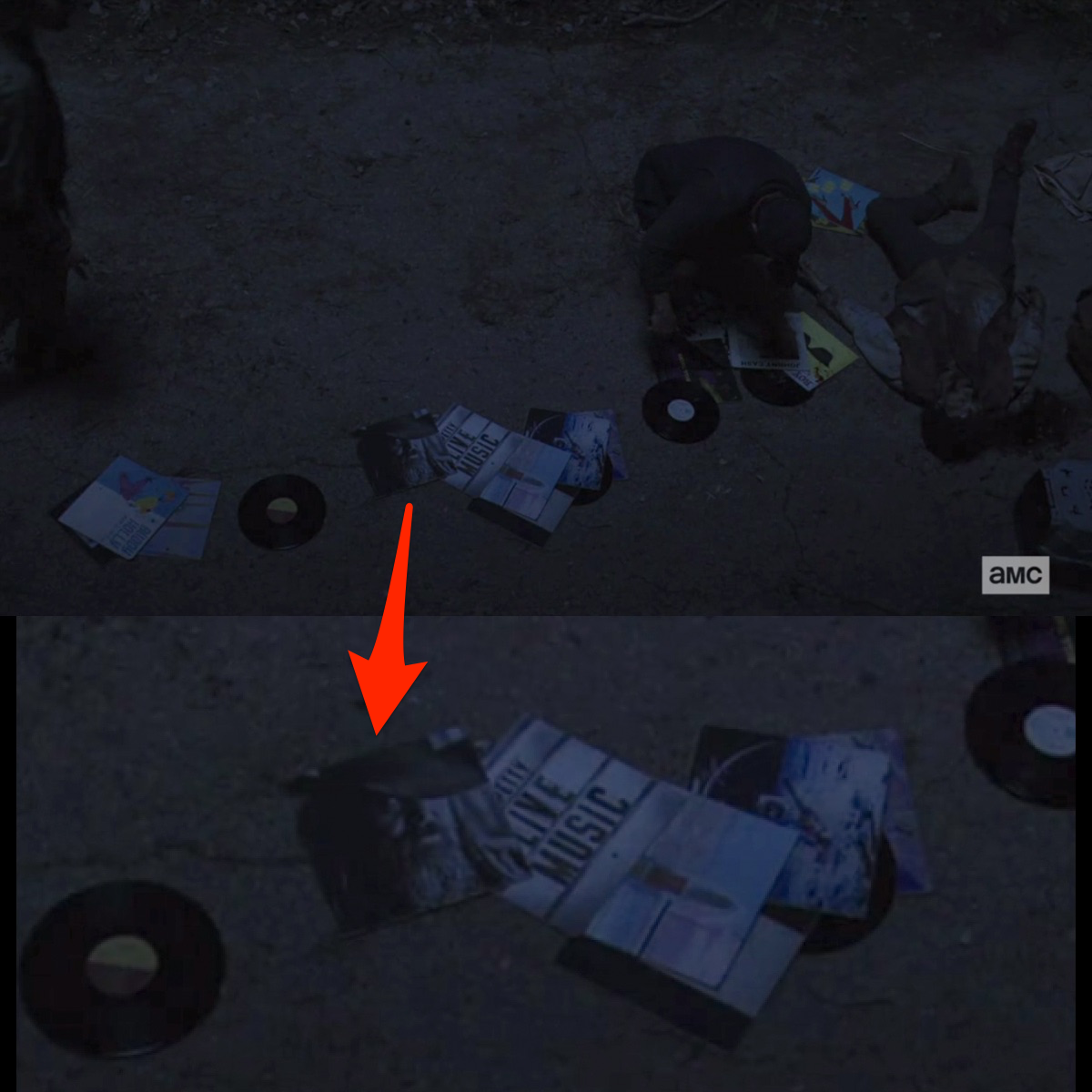 AMCA scene from season five, episode 14 of ‘Fear The Walking Dead’ shows Beta’s face without a mask on.

If you don’t watch “Fear TWD,” you may have missed this one from September 2019. During season five, Daniel and Grace are travelling on the road. Daniel was travelling with his cat, Skidmark, and his collection of vinyl records.

When they’re ambushed by a few walkers, one of the undead knocks the vinyl records into the road. An overhead shot during the scene momentarily shows an album with a familiar face on the cover.

“Ryan, do you want to comment on, there’s a little bit of an Easter egg in ‘Fear 514’ that might be suggestive of Beta’s past?” Hardwick asked Hurst on air.

“All I can say at this point is that maybe Beta was a large personality in the world before the apocalypse and sort of letting go of that may have been tragic to his psyche,” said Hurst.

That’s an interesting comment from Hurst. It suggests that Beta may not have been happy that after becoming famous, it didn’t mean anything in a zombie apocalypse.

Relive the moment: See Daniel try to gather up some of his vinyl, including the one with Beta’s face 22 minutes onto “Fear TWD” season five, episode 14.

Beta was humming early on in season 10. 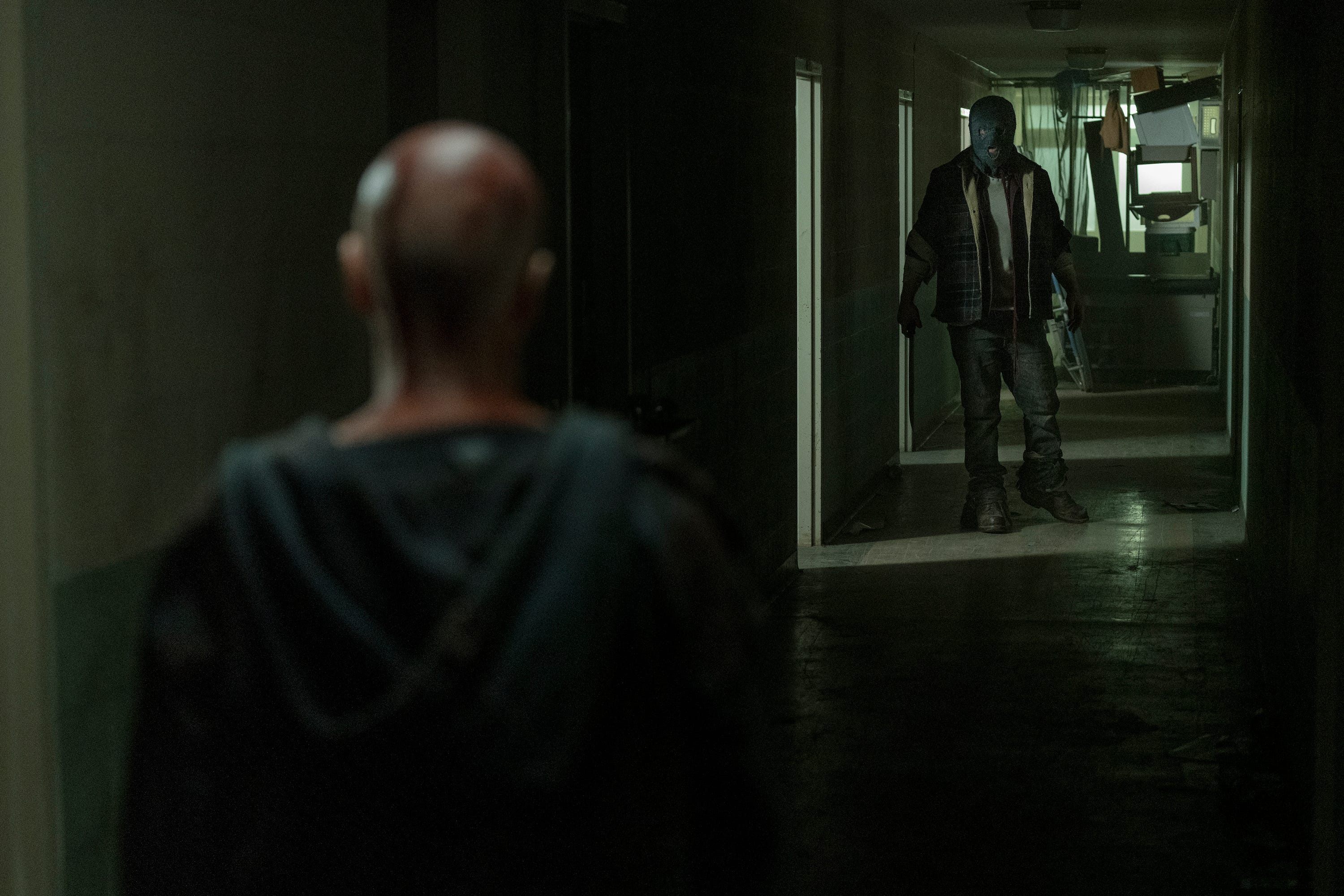 Jace Downs/AMCHe was likely humming one of his own tunes.

If you go back to the flashback episode of season 10 where Beta and Alpha meet, you can hear Beta humming through the hallways of the abandoned building he’s wandering.

Alpha knows the song too and starts humming it herself. This upsets Beta, who asks Alpha not to do it again.

Magna was listening to one of “Beta’s songs” early in season 10. 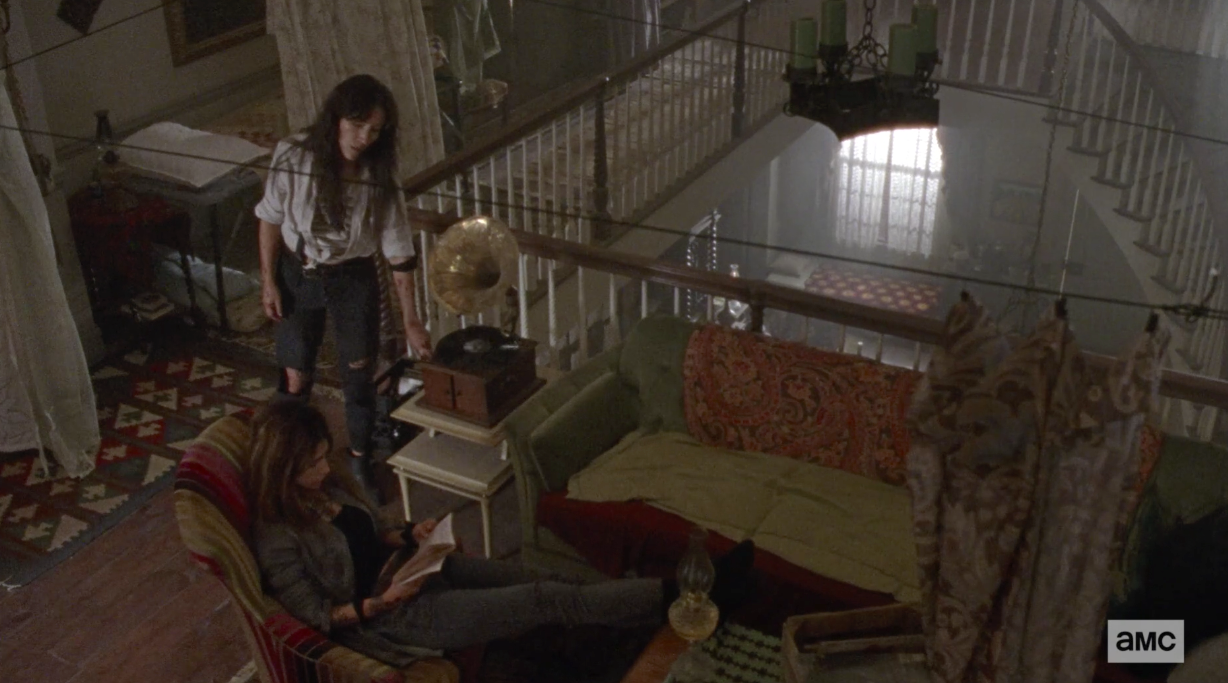 AMCMagna listens to one of Half Moon’s songs as she reads a book.

This is a really cool Easter egg Insider learned about. When Magna is listening to a record on season 10, episode five, that’s Ryan Hurst singing.

The kicker? He’s actually singing lyrics to an Emily Kinney song titled “The Turtle and the Monkey” you can listen to here. Kinney previously played Beth on “TWD” and is a singer in real life.

Relive the moment: Hear Hurst singing about six minutes into season 10, episode five of “TWD” as Magna and Yumiko have it out.

Beta’s voice was recognised by one of the Whisperers. 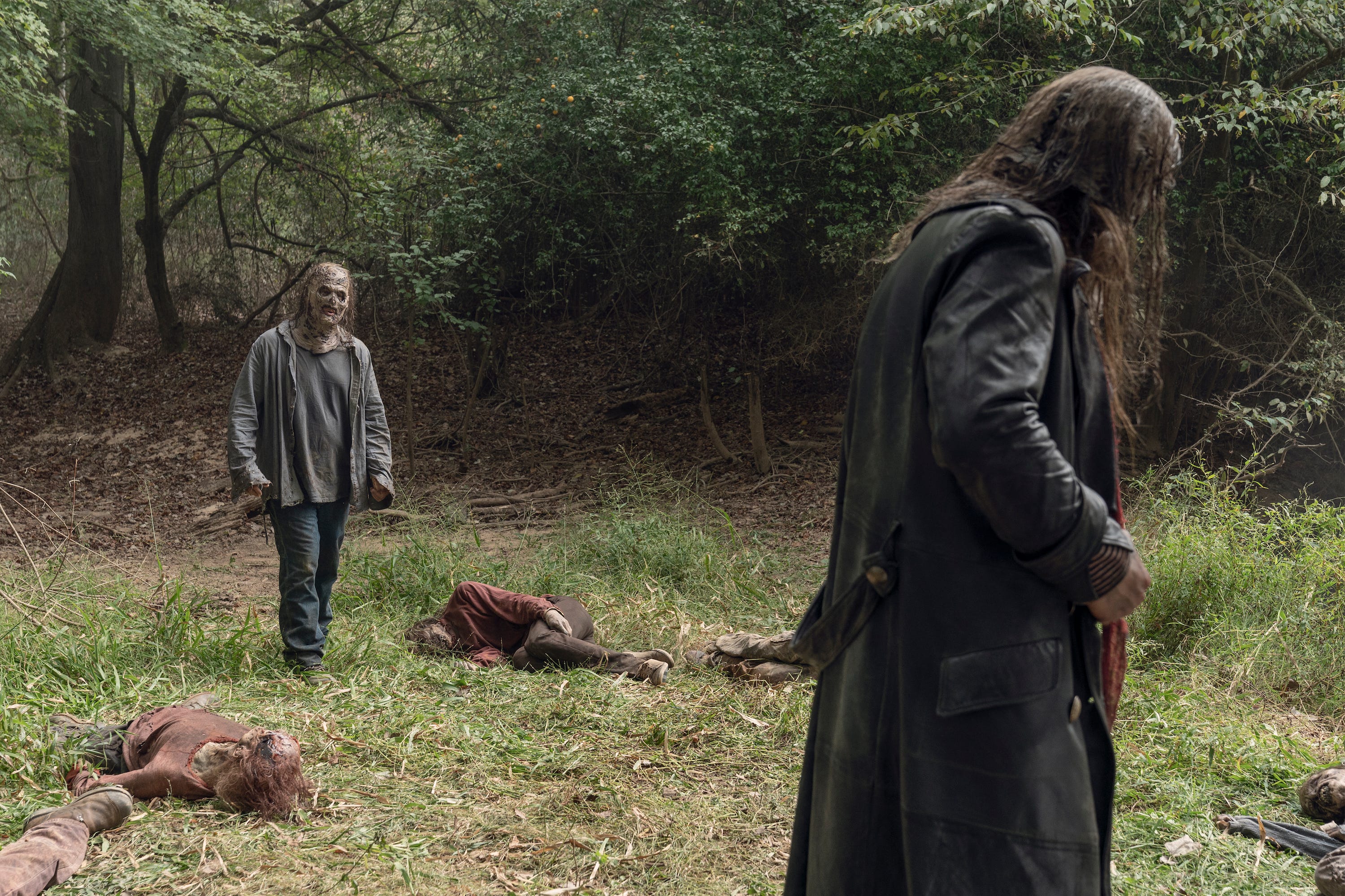 Jace Downs/AMCA man captures Beta when he’s most vulnerable and pays for it.

After killing Gamma, part of Beta’s face was exposed. A nearby Whisperer sees Beta’s face and recognises him.

“It’s you,” says the Whisperer. “Your voice sounded familiar, but…”

He never gets to say another word as Beta kills him on the spot.

Finally, on Sunday’s episode of “TWD,” we see Beta’s face once again on a different album cover. 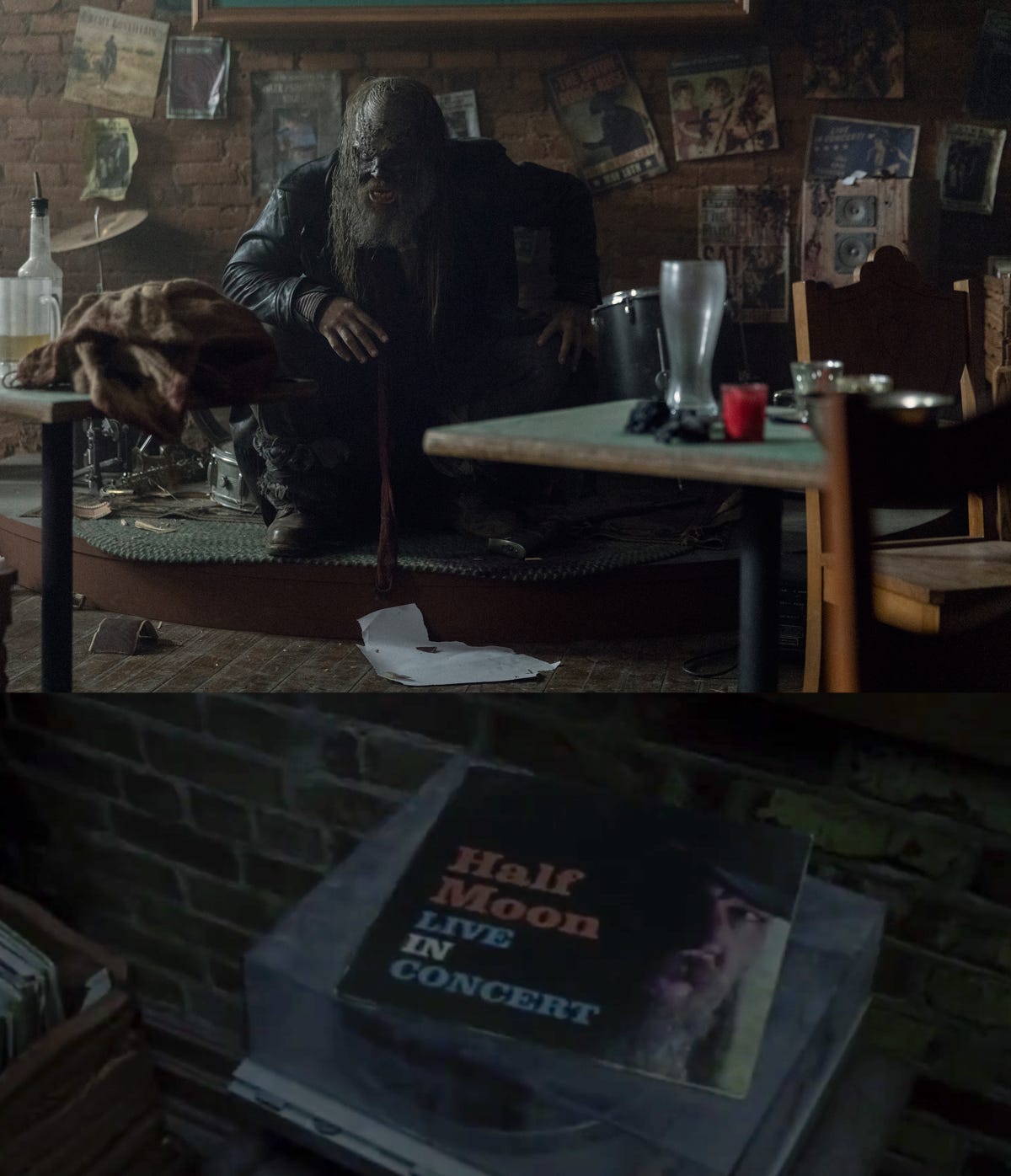 Jackson Lee Davis/AMC, AMCThat was Beta on the record he looked at on Sunday’s episode.

Beta walks into a building with guitars and looks at his face on an album cover. It reads Half Moon live in concert. He then puts the record on to gather a horde of the undead.

Relive the moment: See Beta revisit his past and look at one of his album covers 24:40 minutes into season 10, episode 14.