17 details you may have missed on Sunday's 'The Walking Dead' 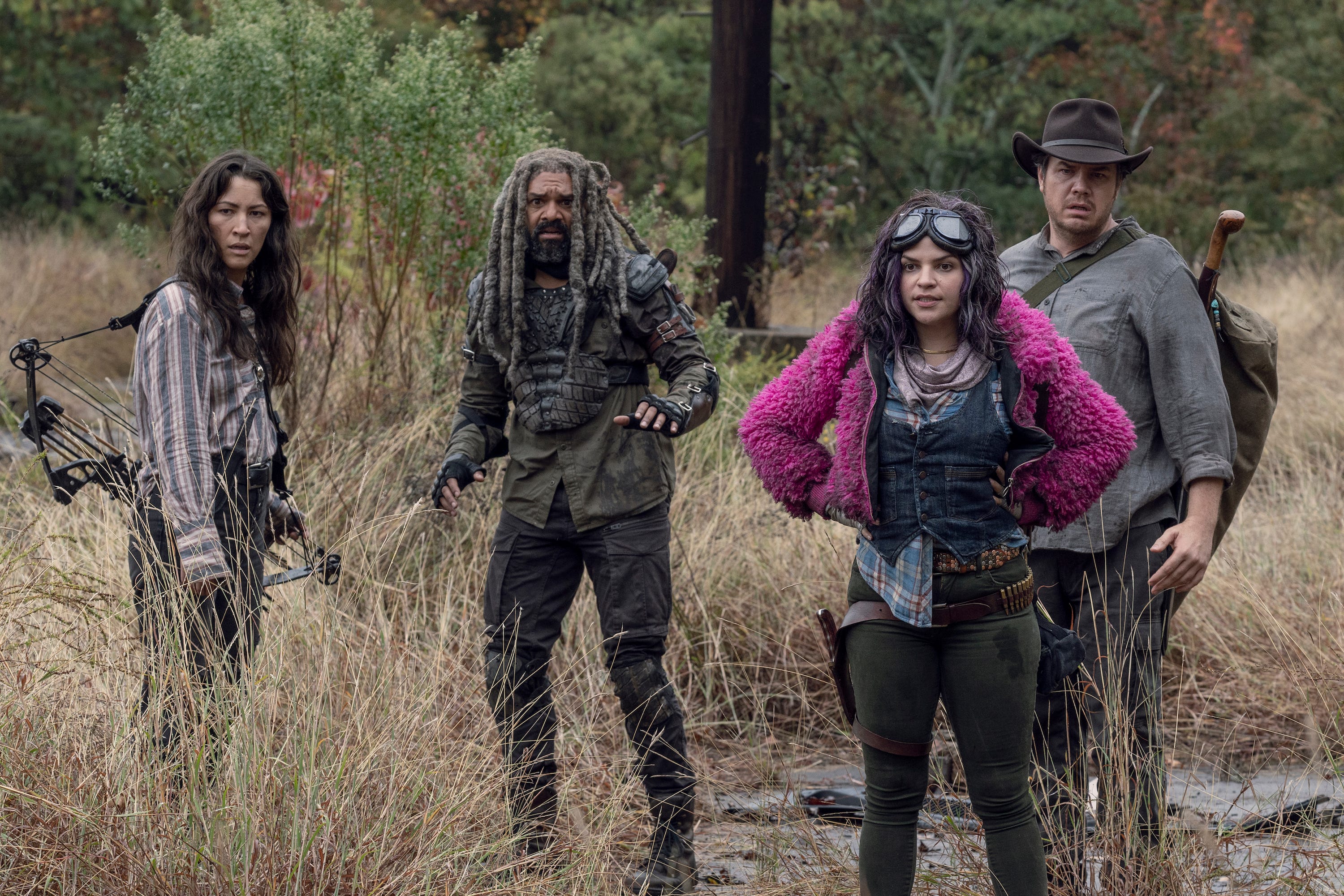 Princess starts off the episode yelling “Sup?” to Eugene, Ezekiel, and Yumiko. 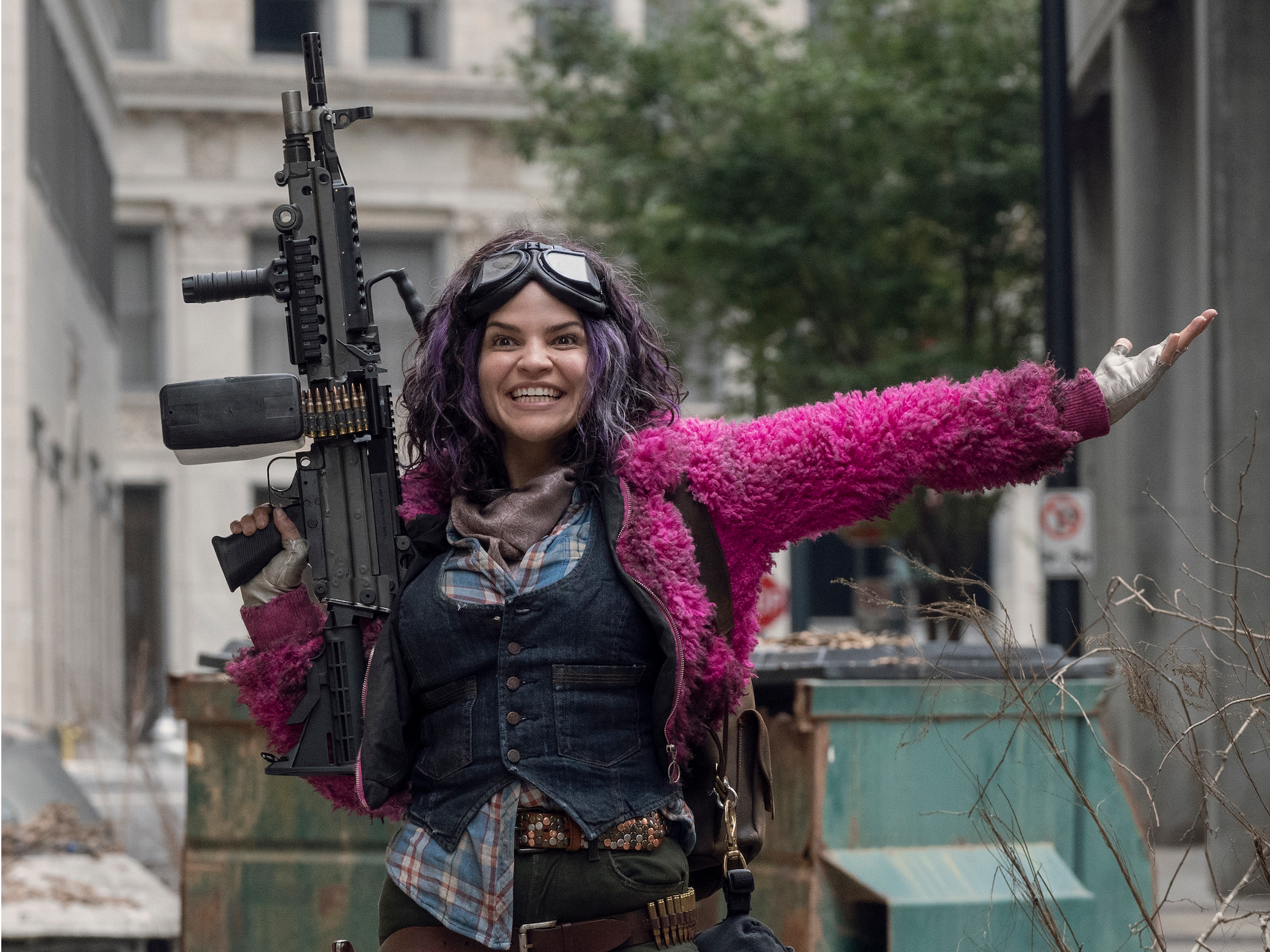 The three look extremely unnerved by her unexpected welcome. This isn’t a random greeting.

That’s how Princess made her entrance in the “Walking Dead” comics. 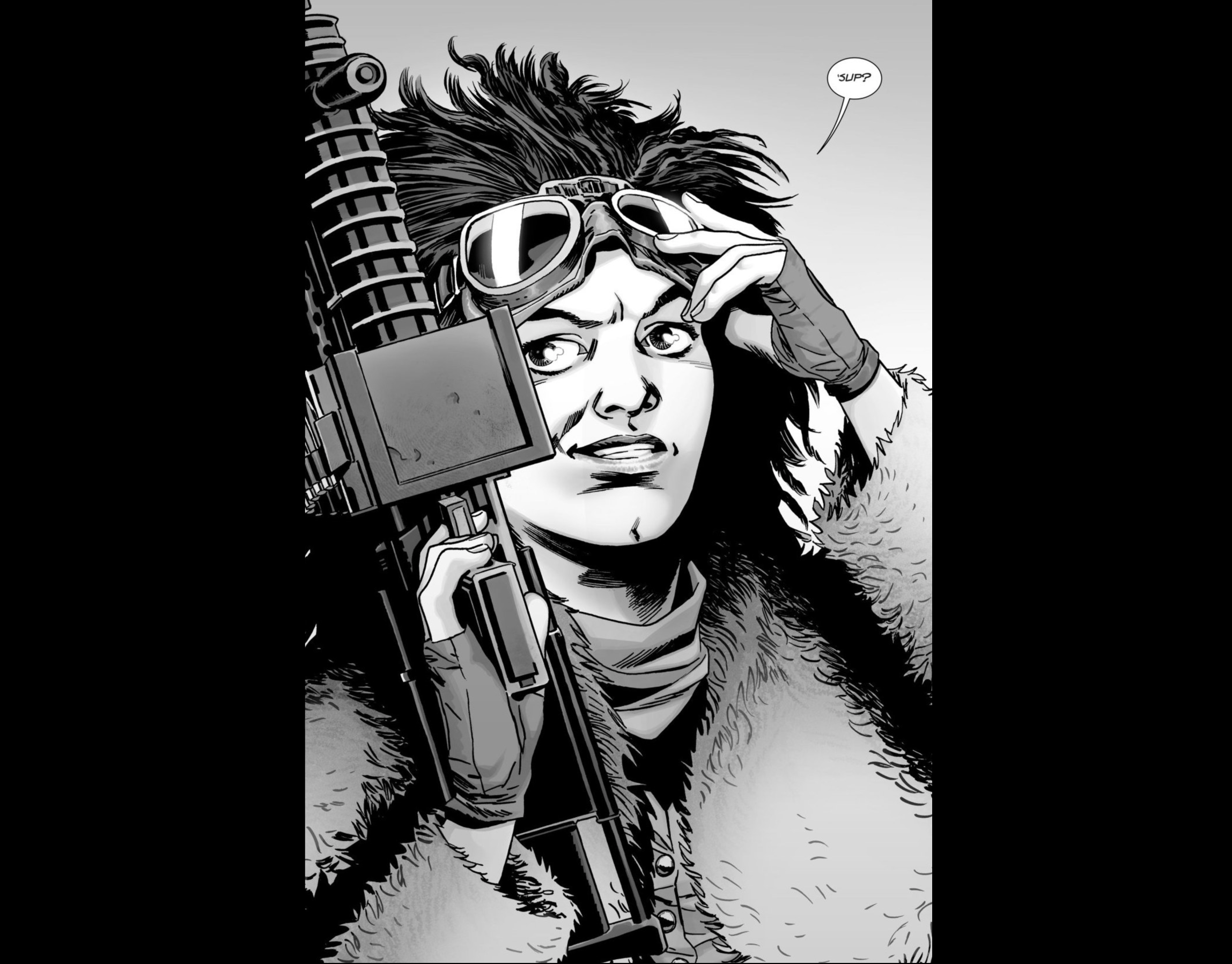 Skybound/Image ComicsPrincess gets a full page in ‘TWD’ comic dedicated to her ‘Sup?’

This is the first line Princess speaks in issue No. 171 when she meets Eugene, Michonne, Yumiko, Magna, and Siddiq.

If the tower where everyone was seeking shelter looked familiar, it’s because it’s the same location where Beth was holed up on season five. 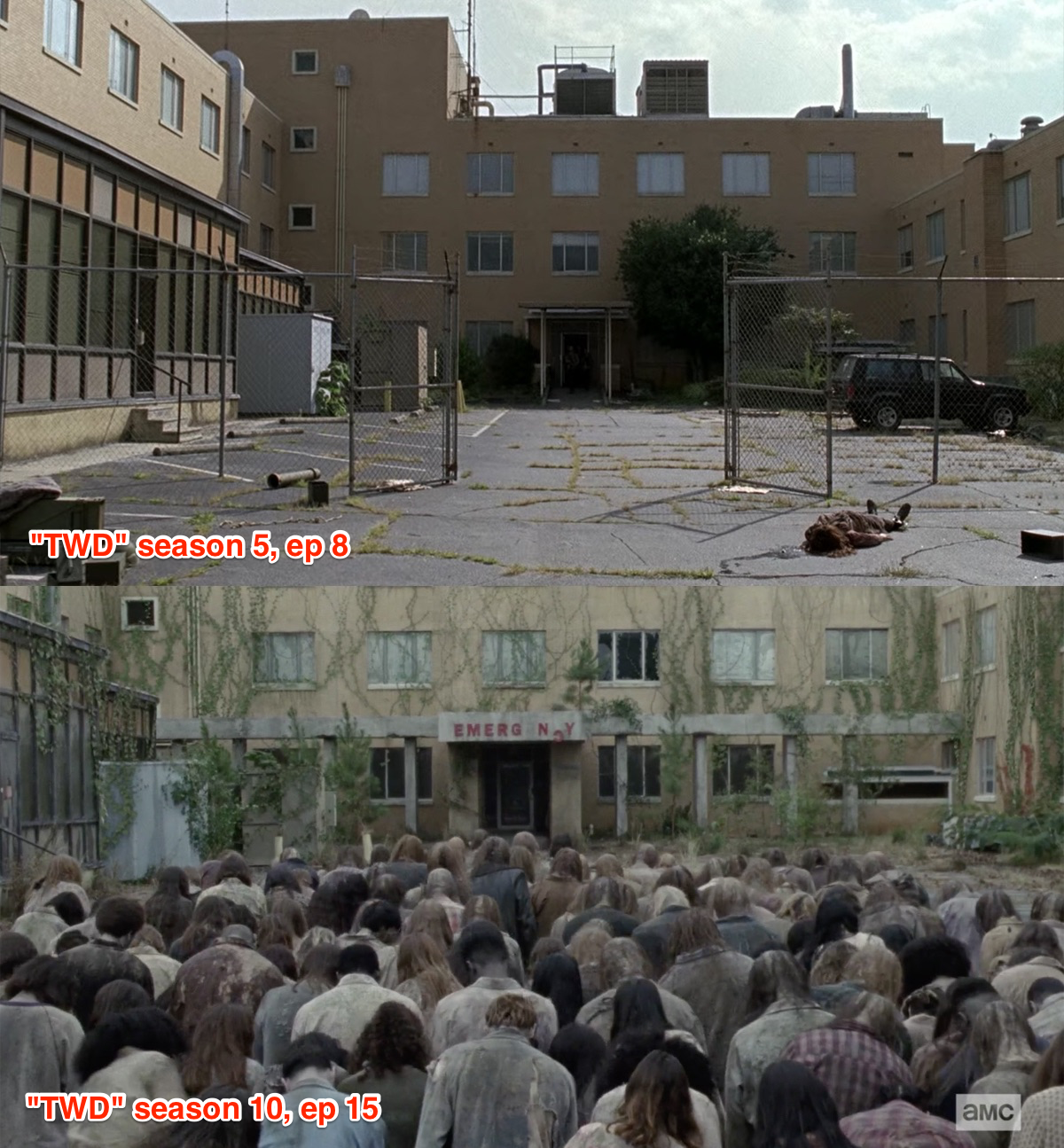 The tower and the hospital where Beth was held hostage on season five are the same filming location. They’re not meant to be one and the same though.

If you head back to season five, episode eight, the building Daryl brings Beth out of doesn’t have an emergency sign above it.

Princess set up the various walker displays around the city that the group ran into on the road. 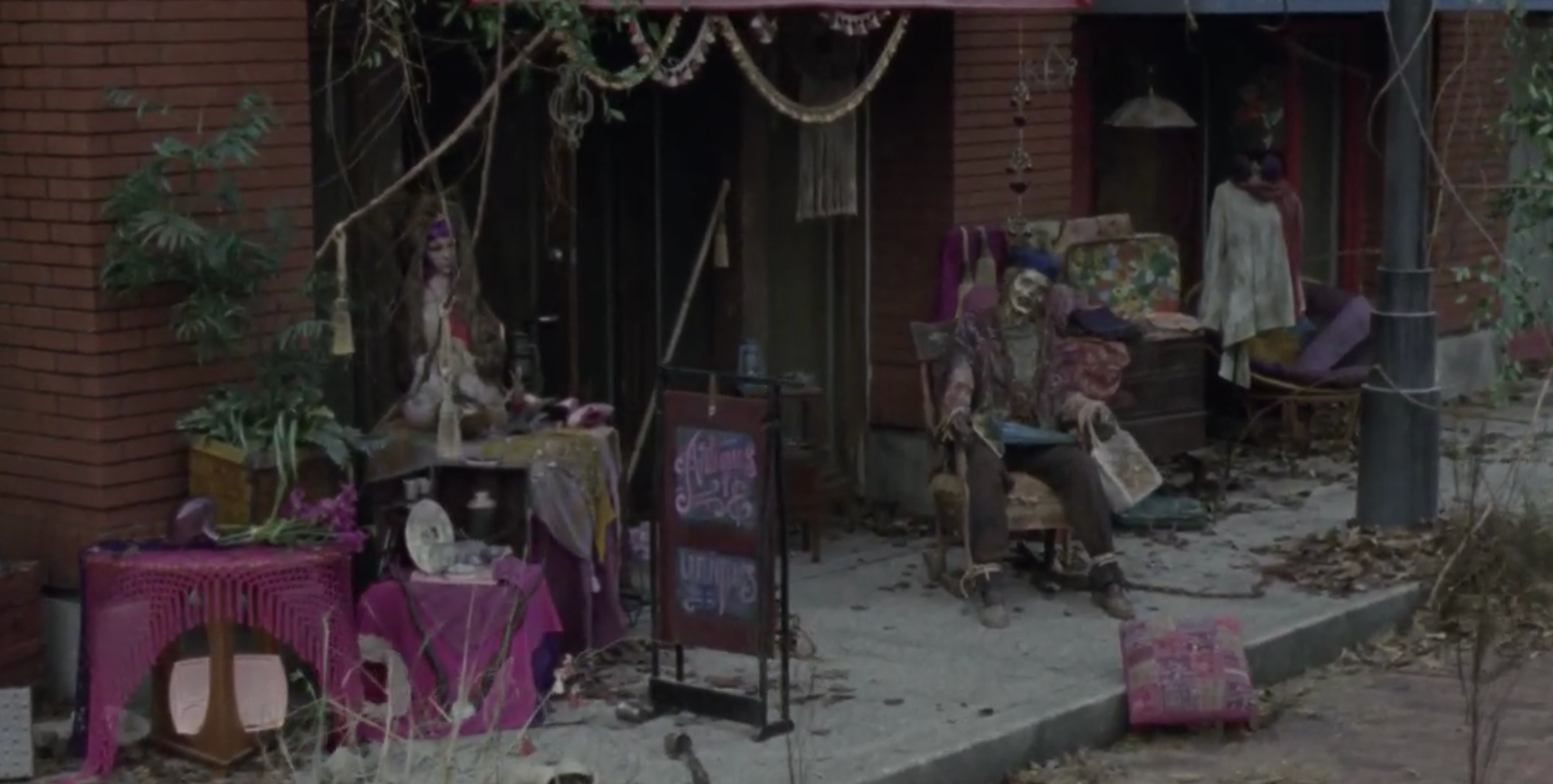 AMCPrincess tied up walkers in interesting situations throughout a city.

In case it wasn’t clear, it was Princess who placed the walkers in cages on the highway and in storefronts.

“Not many rotters in the city, so I put these up as my decoration,” Princess told Ezekiel and the group.

Even if you did pick up on this, it’s worth mentioning because it’s not in the comic at all. It seems like the show is building more depth to Princess’ character. For those who have read the comic, the sight of walkers in cages on season 10, episode 14 brought to mind a very specific character from the comics.

In the future, Maggie’s son, Hershel, grows up to have his own travelling zombie circus. 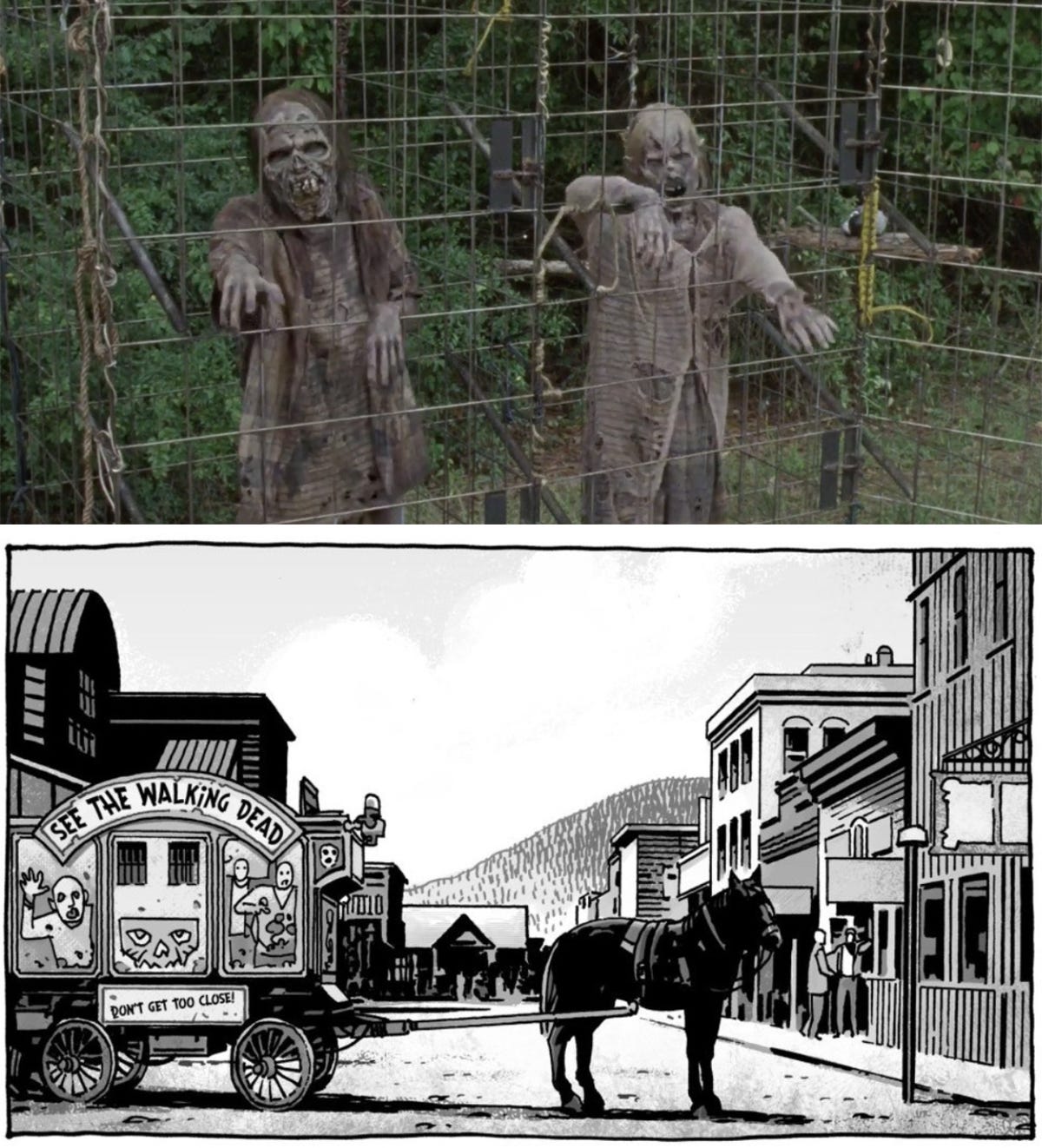 AMC, Skybound/Image ComicsThe sight of some of Princess’ zombie pals may have made some comic fans have flashes of Hershel’s walker circus.

The final issue of “TWD” skips years into the future where the undead are barely an issue anymore. They’re practically a legend.

They’re so rare that Hershel Greene has rounded up the final few he can find and keeps them imprisoned in his own travelling circus cage.

Ezekiel refrains from telling Princess he went by the title “king.” Jace Downs/AMCIf only Princess knew she was in the presence of royalty.

When Princess introduces herself to the trio she mentions she picked that nickname because the idea of calling herself a queen makes her sound old and is a bit pretentious.

It’s a funny line since viewers know Ezekiel had people, including Jerry up until recently, still referring to him as a king in the zombie apocalypse.

You may have missed it, but Yumiko and Eugene share some glances with Ezekiel after Princess mentions this. Ezekiel holds back from introducing himself as any sort of king.

“I think she would just be like, ‘Dude, for real? Are you serious?'” Lázaro said of Princess’s reaction if she learns about Ezekiel’s regal title.

In the comics, Juanita Sanchez doesn’t just refer to herself as Princess. She calls herself the Princess of Pittsburgh. That’s not the case here.

In case you were wondering, Lázaro didn’t dye her hair purple for the role. 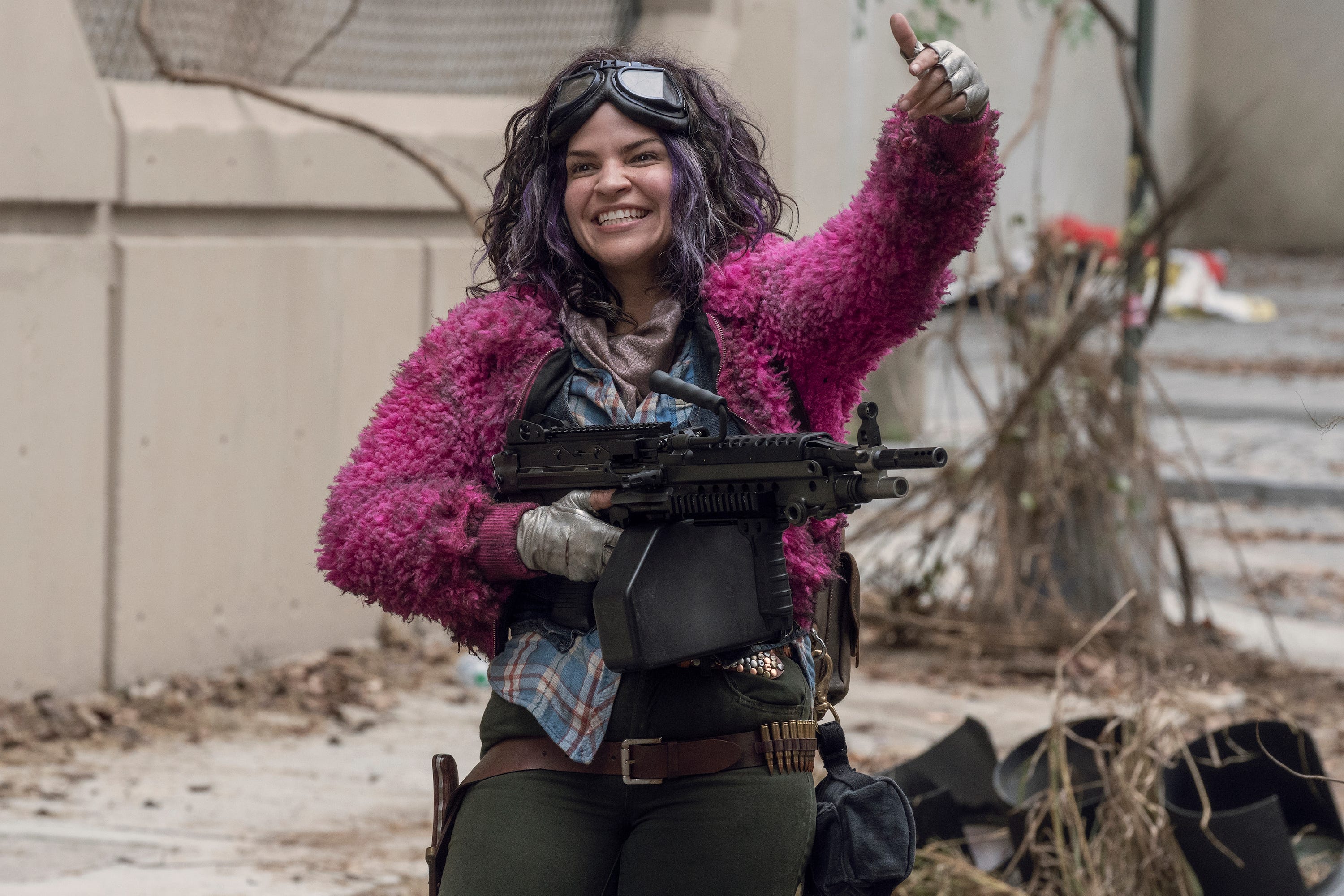 Jace Downs/AMCYes, there is a Princess wig.

Lázaro has dyed her hair in the past, but she didn’t dye it for “TWD.”

The group did not find Princess in Pittsburgh. 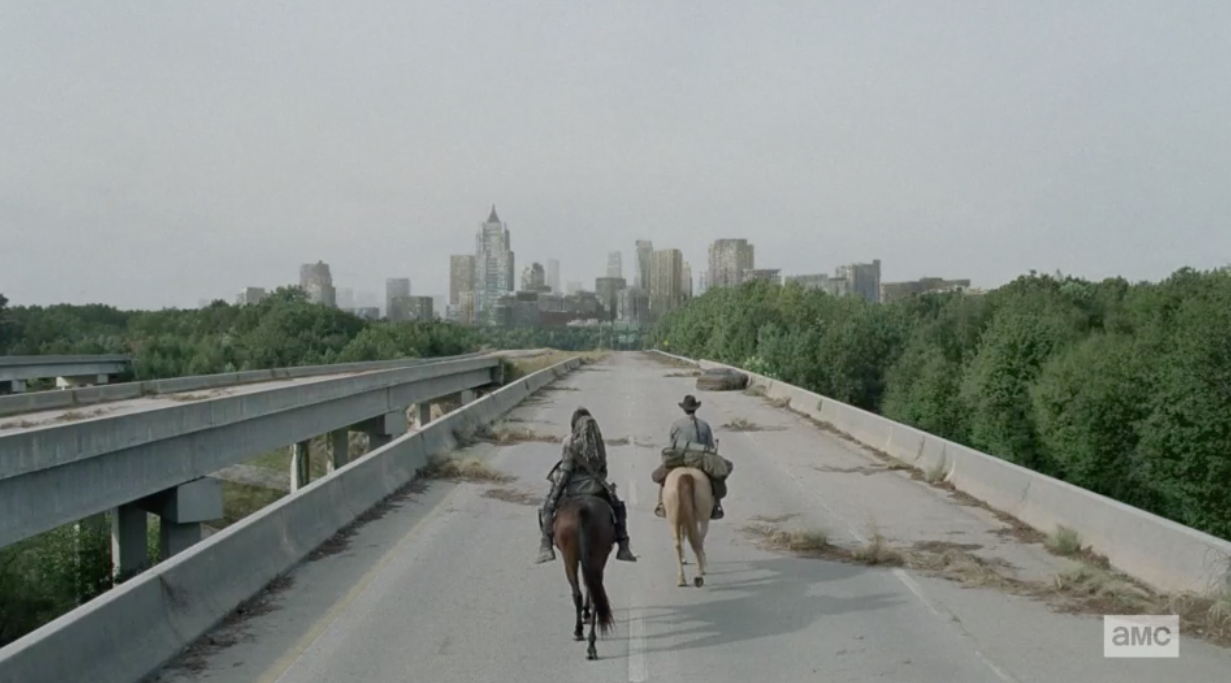 AMCApparently, this is not supposed to be Pittsburgh.

In the comics, Princess inhabits the city of Pittsburgh. That’s not the case on the show even though the skyline appears to resemble the city a bit.

“We took a different path. The comic book destinations, we were mapping and we’re like, ‘Pittsburgh does feel a little out of the way,'” showrunner Angela Kang told Comicbook.com’s Brandon Davis. “And also, there was a request from [‘TWD’ chief creative officer] Scott [Gimple] from the universe side to sort of avoid that area, and so we are on a different path.” 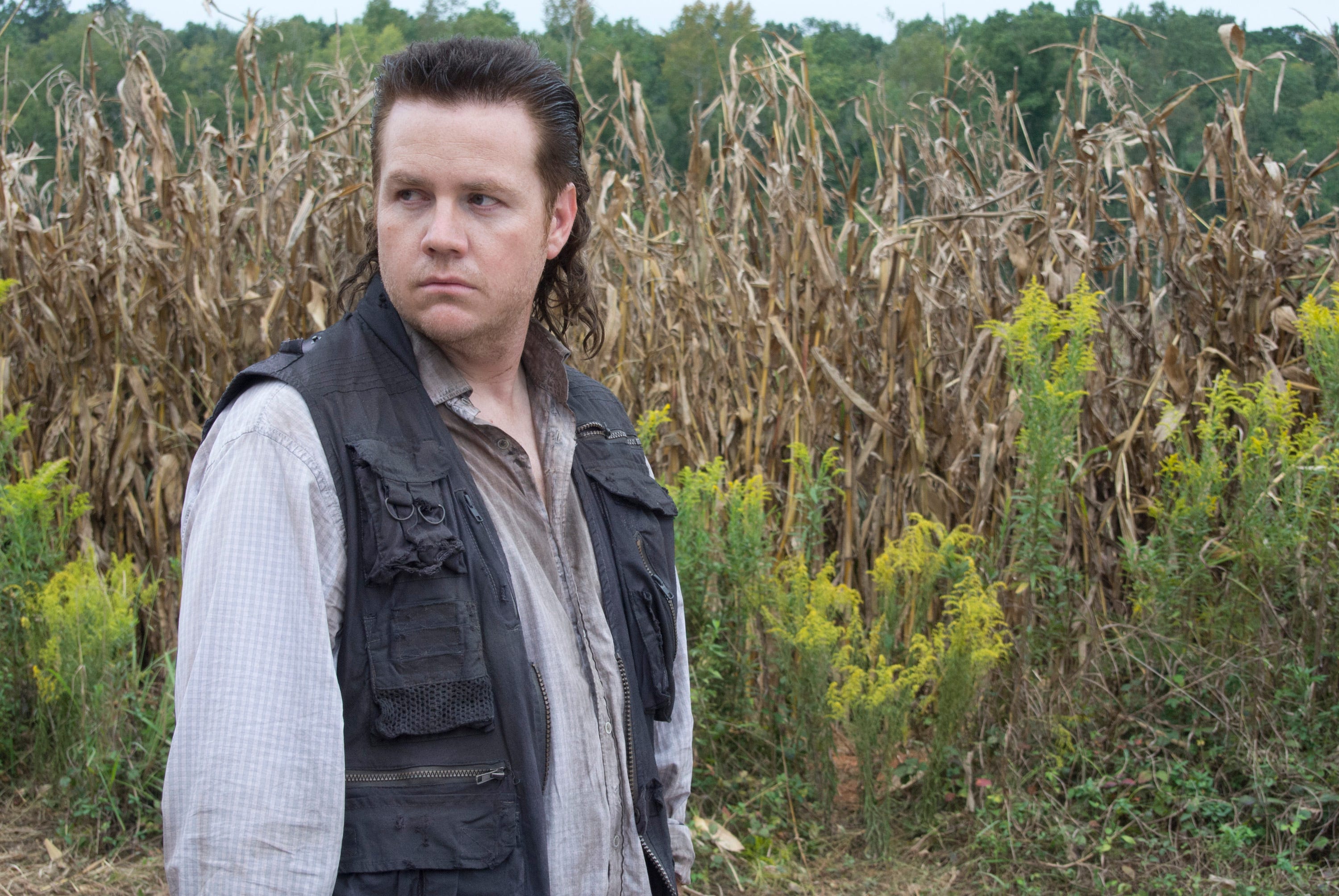 Gene Page/AMCOn season four, episode 11, Eugene said he was on an important mission to get to Washington, DC.

You may have had flashbacks to season four. When Eugene, Abraham, and Rosita first came across Glenn and Tara, Eugene also said he was on a very important mission.

Back then, Eugene claimed he was trying to get to Washington, DC, to save the world. He claimed to know exactly what started the zombie apocalypse.

We eventually found out that it wasn’t true. Eugene had no such knowledge of why the world went sideways or how to cure it. He was simply using the mission to give Abraham a sense of purpose during a low moment, and, more importantly, to get Abe to give him some much-needed protection. (Eugene wasn’t exactly a walker warrior when we first met him on the series.)

Now, on season 10, Eugene is on an actual mission that’s (hopefully) worth risking his life for. The group is hoping to meet a new ally in Stephanie and her community.

The contrast to Eugene’s first episode on the series is a welcome one here because it shows how far his character has come since season four.

Princess shoots away a group of walkers on the show, which also sends the group’s horses hightailing it out of there. 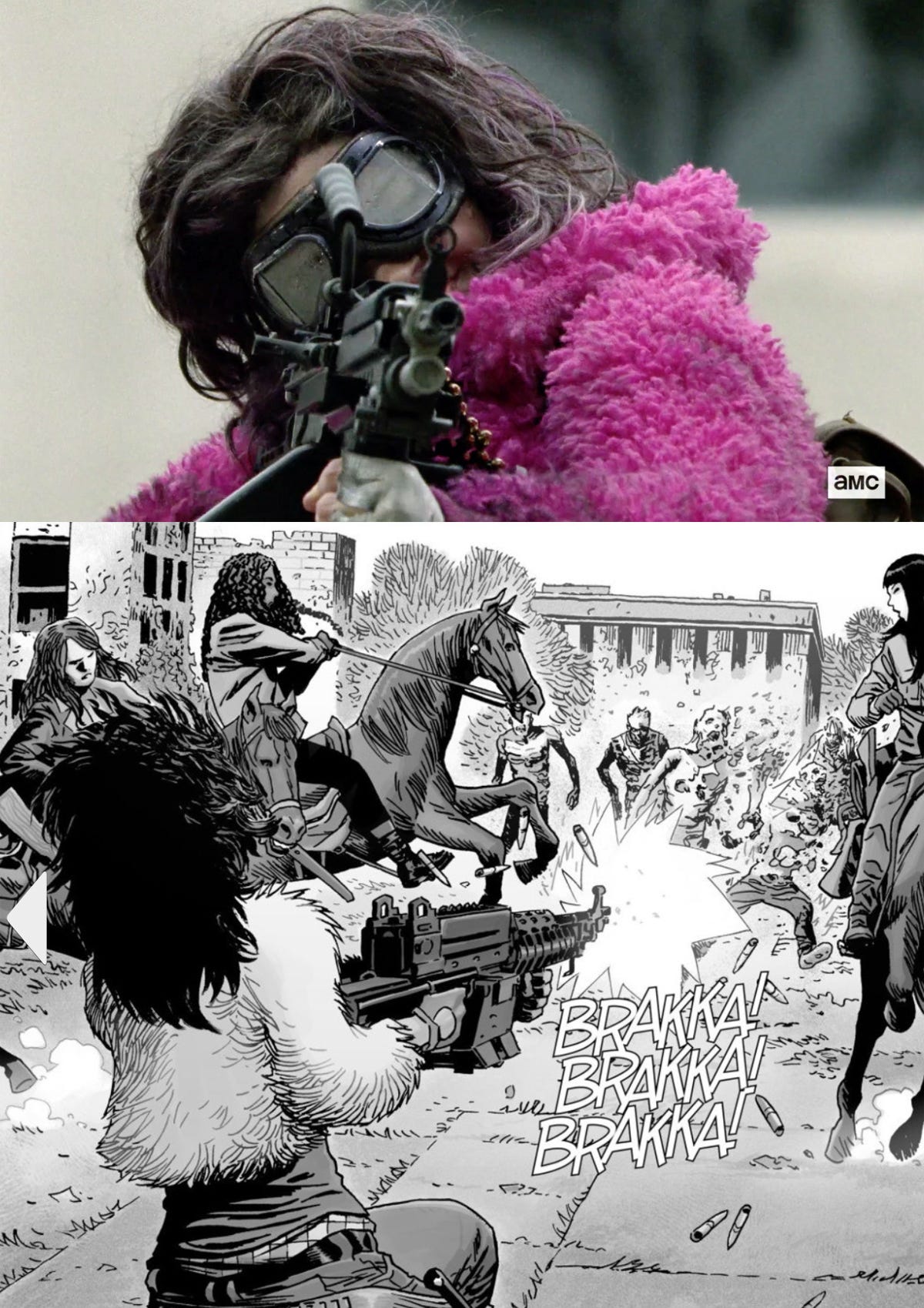 AMC, Skybound/Image ComicsHer good intentions cost the group a lot more on the show than in the comics.

Princess does the same in her first comic appearance, but she doesn’t cause the horses to run off.

Judith runs off from where she’s supposed to stay safe and it shows she has some things in common with her brother, Carl. 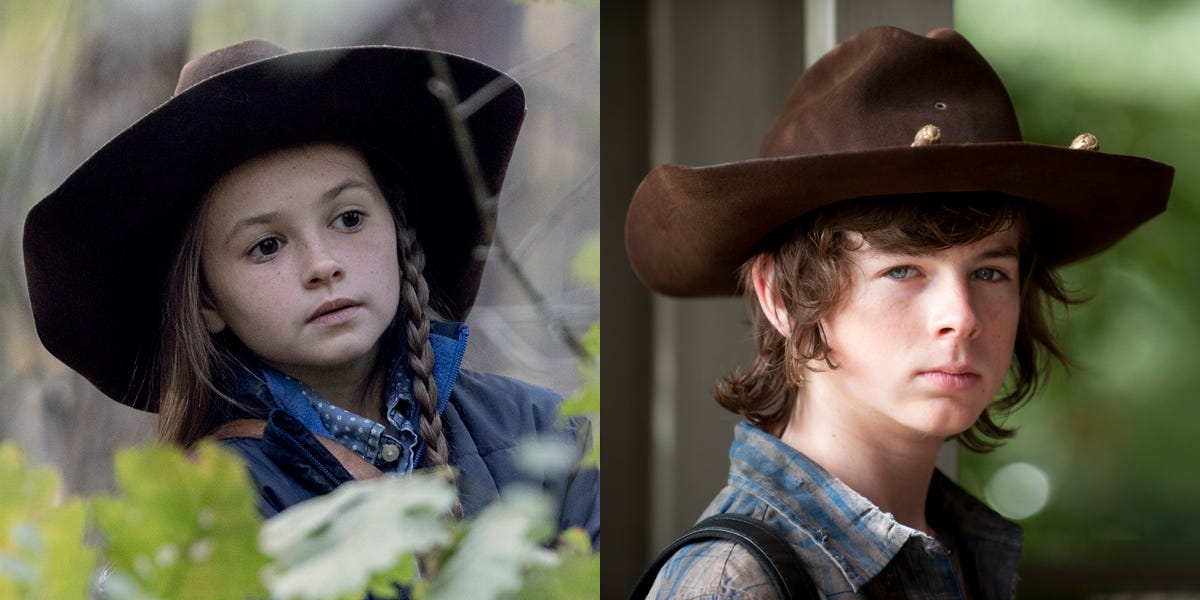 Judith gets tired of staying in the tower and Daryl finds her out in the woods.

A running gag on “TWD” was that Carl never stayed put when he was ordered to by his parents. He famously left the farmhouse on season two to wander out in the woods and on season seven he snuck off to Negan’s Saviour fortress.

At least Judith left a note about where she was going. That wasn’t exactly Carl’s modus operandi.

Beta arrives at Alexandria with his horde of walkers, but the town is pretty much evacuated. 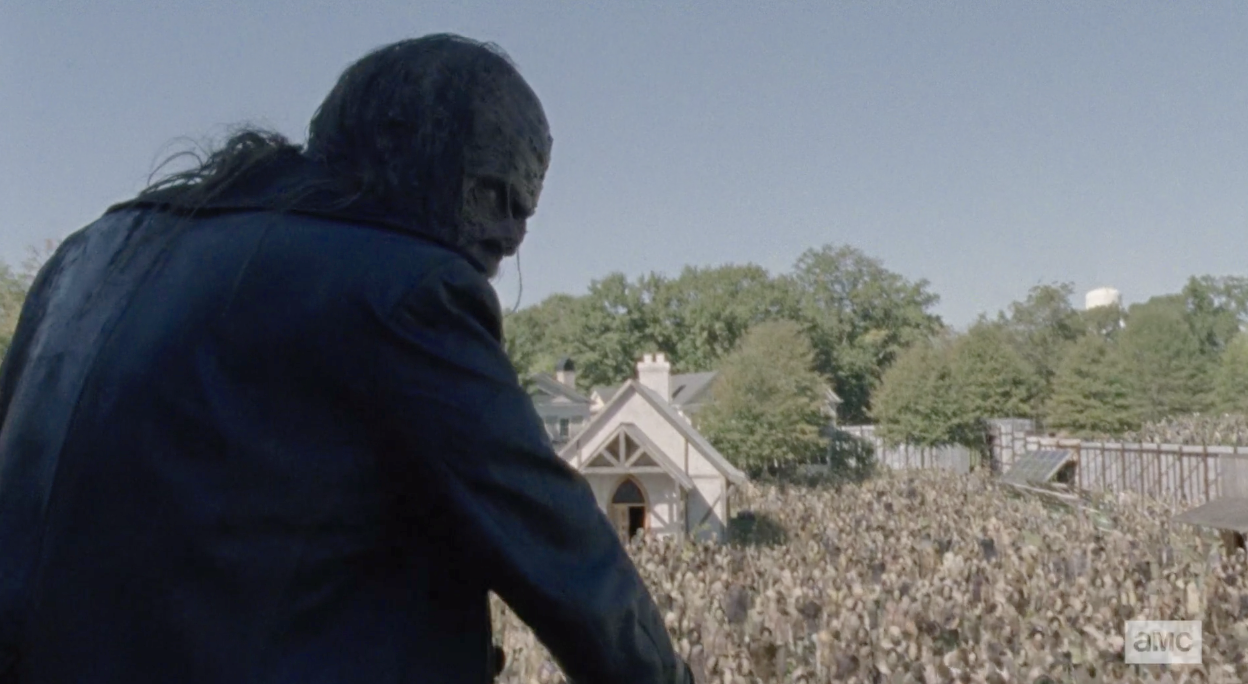 AMCBeta also brings the herd of walkers to Alexandria in the comics. Unlike the comics, the horde doesn’t destroy Alexandria.

This is a big change from the comics where Alexandria does get overrun by the Whisperer horde.

It seems likely the show may have changed this up since we’ve seen something similar on the show before. For show viewers, another zombie-filled Alexandria may have felt too similar to season six when the undead overtook the community.

The walker herd stomps out several tomatoes while invading Alexandria. 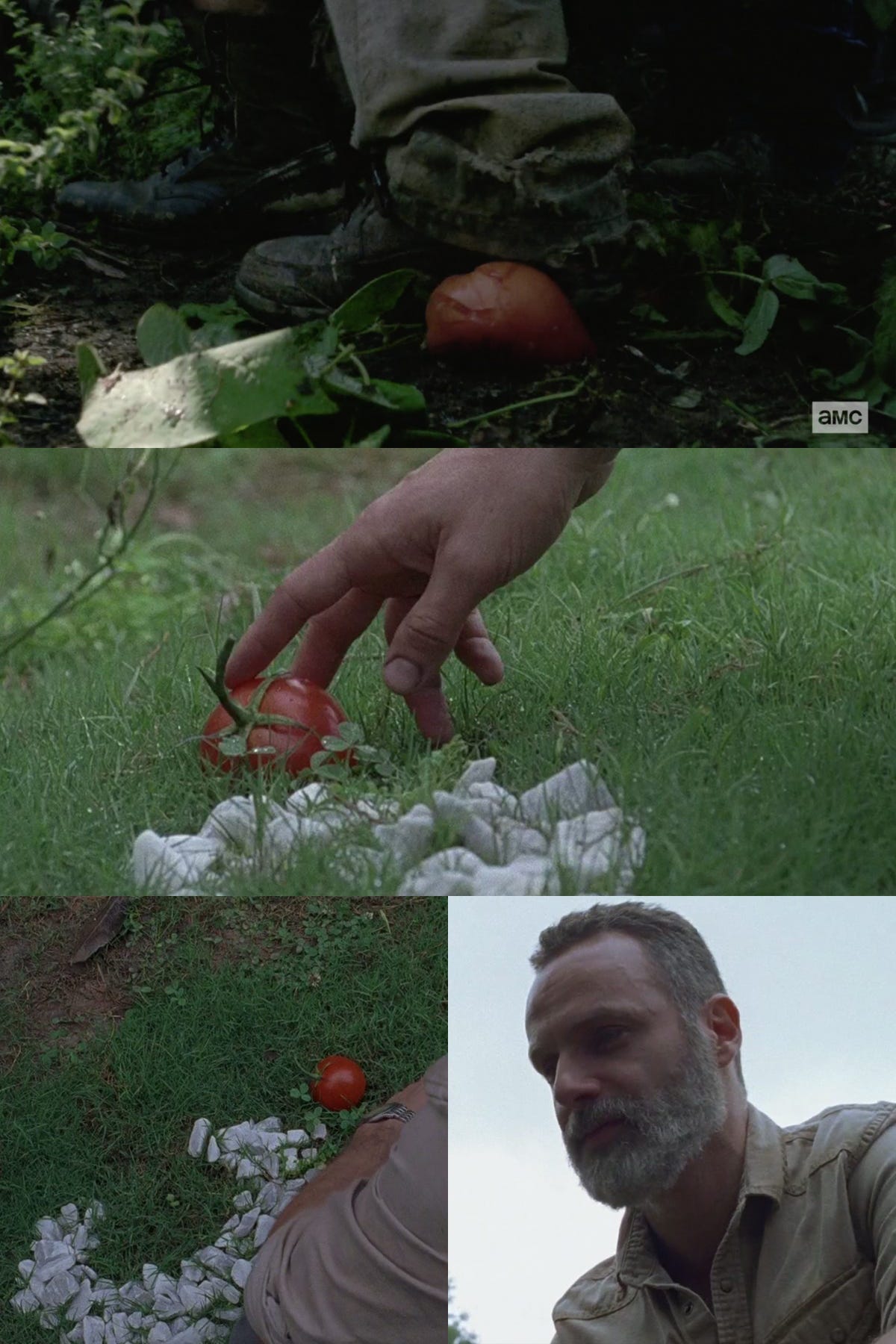 AMCThe tomato has been a symbol of rebuilding a way of life on ‘TWD.’

There has been a lot of tomato imagery on “The Walking Dead.” It signifies new life and new beginnings.

It was a symbol of the future Rick was building that Carl had in mind for the communities. On season nine, episode three, Rick symbolically took a ripe tomato and left it near his son’s grave.

Is that dream crushed? Alexandria’s still standing for the moment.

Dog makes a comeback after being MIA for the entire half season. 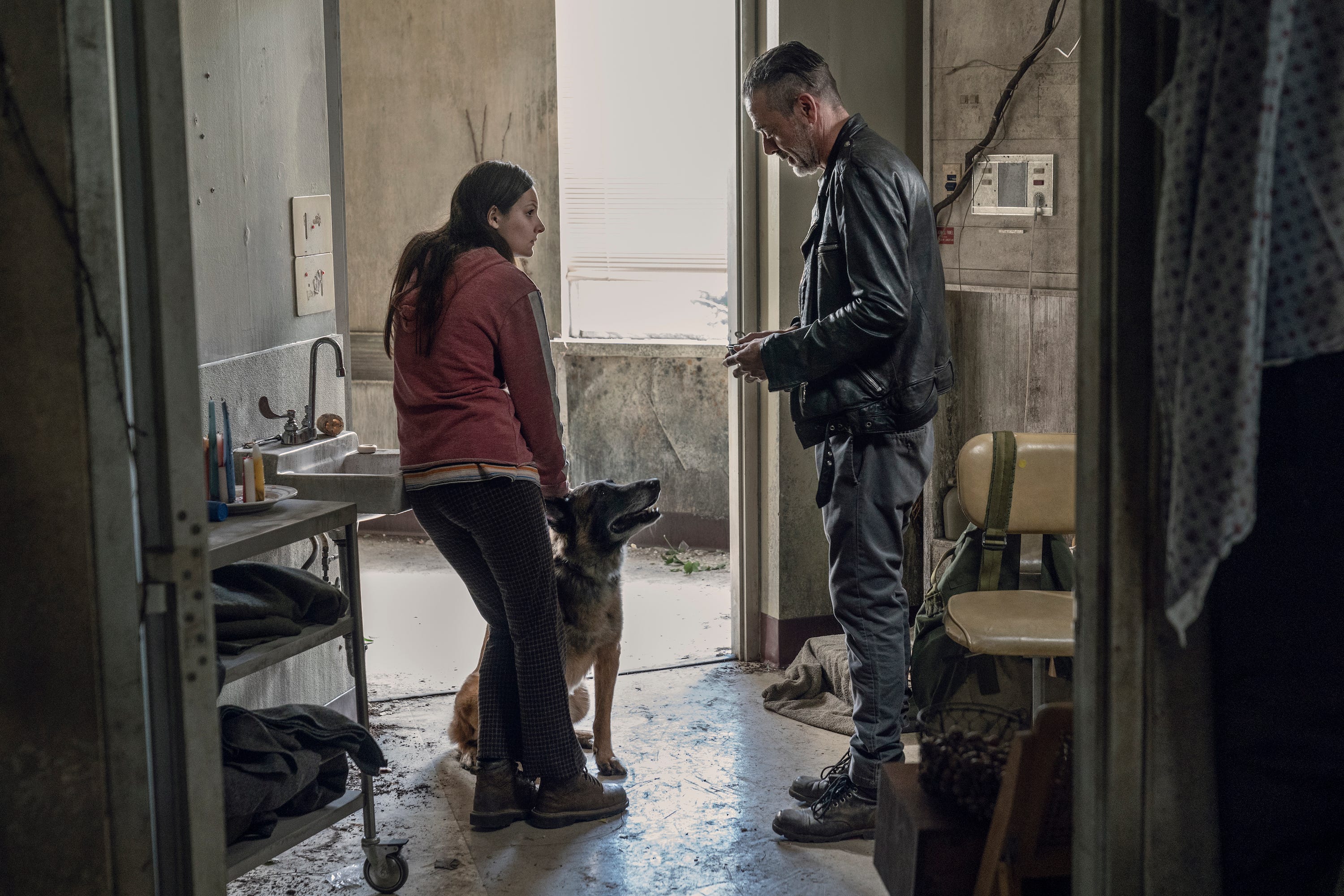 Jace Downs/AMCWe see Dog for the first time all half-season.

The last time we saw Daryl’s dog, aptly named Dog, was on episode seven of the season beside a shirtless Daryl.

It was unclear where Dog has been, so we’re glad to have a minor update on everyone’s favourite “TWD” canine before the show goes on a hiatus. According to Carol, he was helping to keep the cats away from the tower.

Unfortunately for the survivors, that inadvertently led to Beta leading his horde to the tower by the episode’s end. Beta caught sight of a cat running through the woods.

Aaron and Alden are hot on Beta and the walker herd’s trail. In the comics, it’s a bit different. 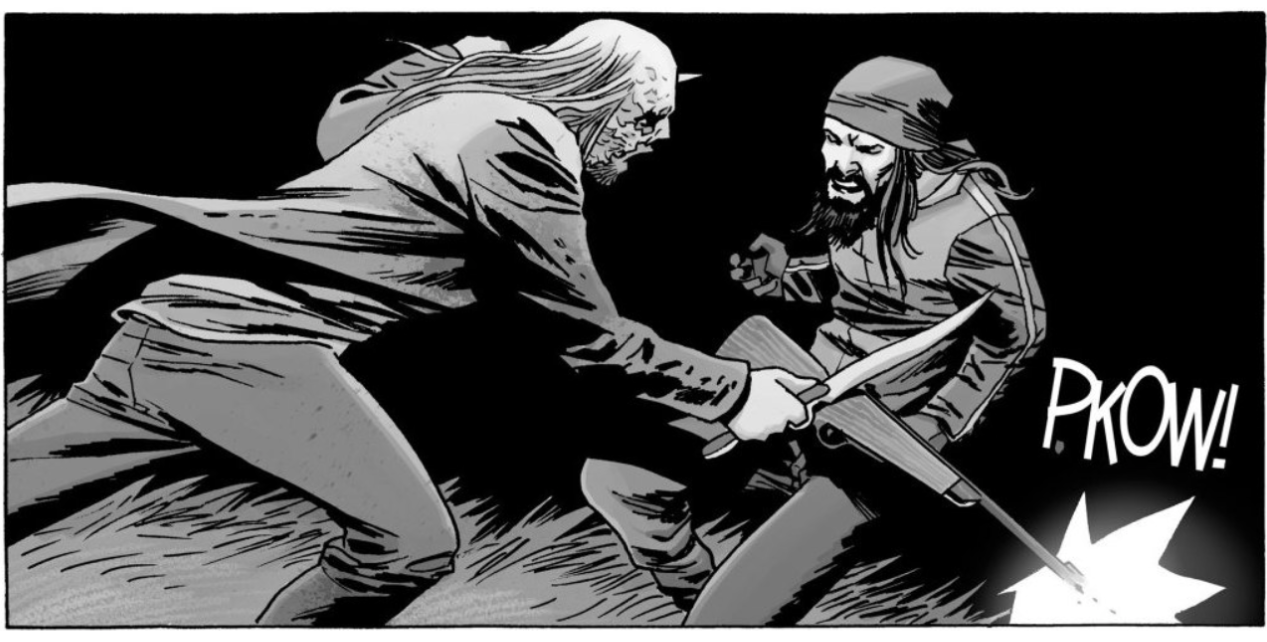 Image Comics/SkyboundAaron is with Jesus in the comics. The two have it out with Beta. Above, you can see Jesus fighting Beta in issue No. 173.

In the comics, Aaron and Jesus come face to face with Beta. The two wind up killing him.

On Sunday’s episode, that’s not exactly how things go down. Aaron and Alden wind up surrounded by Whisperers by the episode’s end.

Kelly revisits one of the most powerful moments from the season 10 premiere. 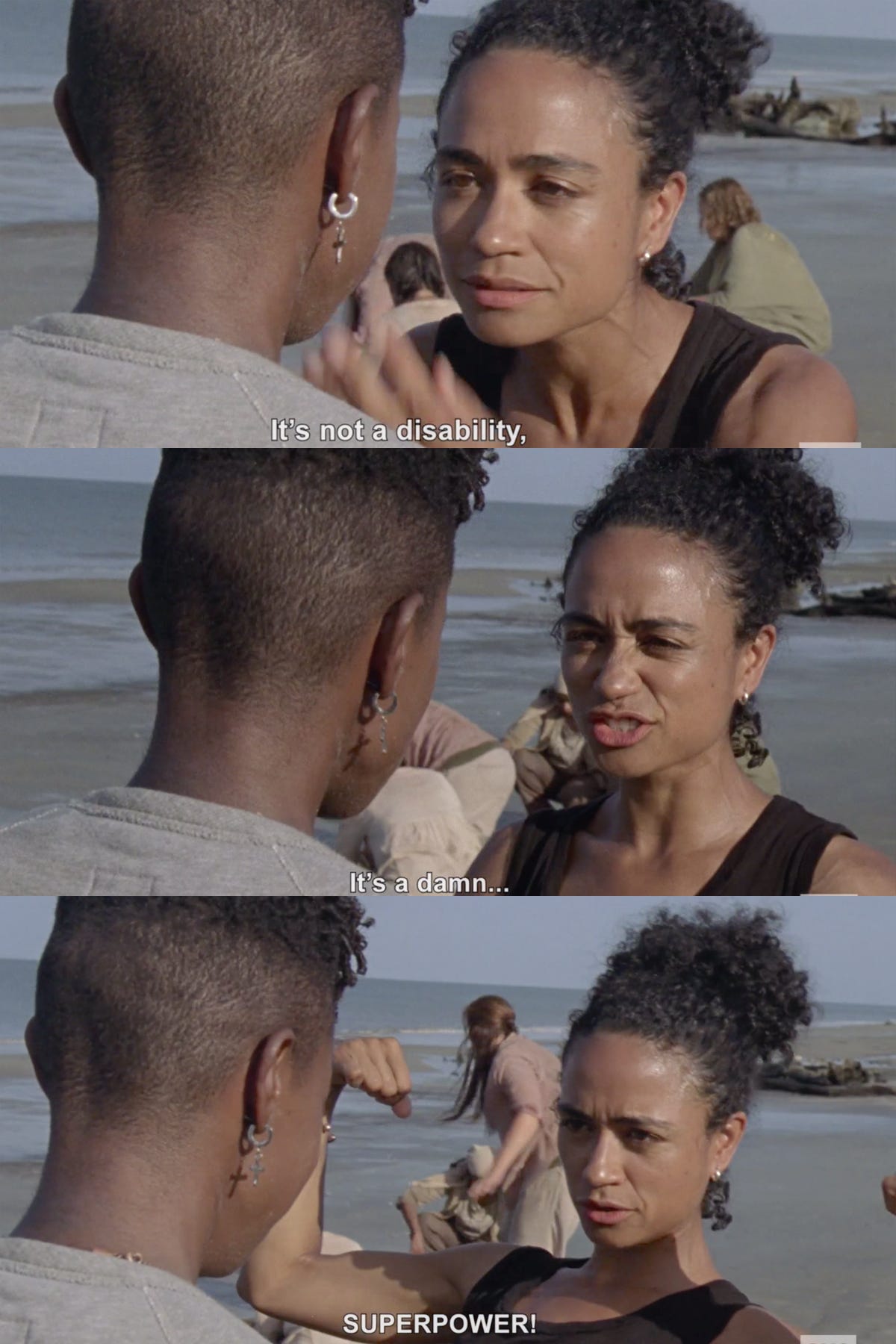 AMCConnie lifted her sister Kelly up when she was scared about losing more of her hearing.

On the season 10 premiere, Connie noticed that her sister Kelly’s hearing was starting to worsen. Kelly eventually opened up about her fear.

Connie reminded her sister that her hearing loss is “not a disability.” It’s a superpower. Kelly imparts this wisdom onto Carol on Sunday’s episode when she’s feeling low.

“When I started losing my hearing, my sister told me that it wasn’t my weakness. It was my superpower,” Kelly tells Carol. “Now, everyone’s learning sign because of me.”

“You think that the way you are is a weakness?” Kelly continues. “I heard the stories about you, in the old days. We all have. You just go off and do the thing that only you can do. Lone wolf. That’s your superpower. You can’t give up everything about yourself because bad things happen.”

Jace Downs/AMCPrincess is in a pickle on Sunday’s episode.

Negan notoriously used the rhyme to incite fear in Rick, Eugene, Michonne, and others before he decided to brutally kill Glenn and Abraham on the season six finale and season seven premiere.

Instead of seeing the rhyme used as a device to decide who should die, Princess uses it as a tool to save lives. It’s worth noting that Eugene is present for both instances of how this rhyme is used in the series.

Aaron says the line, “whatever it takes,” as he and Alden discuss doing what they must to stop the Whisperers. 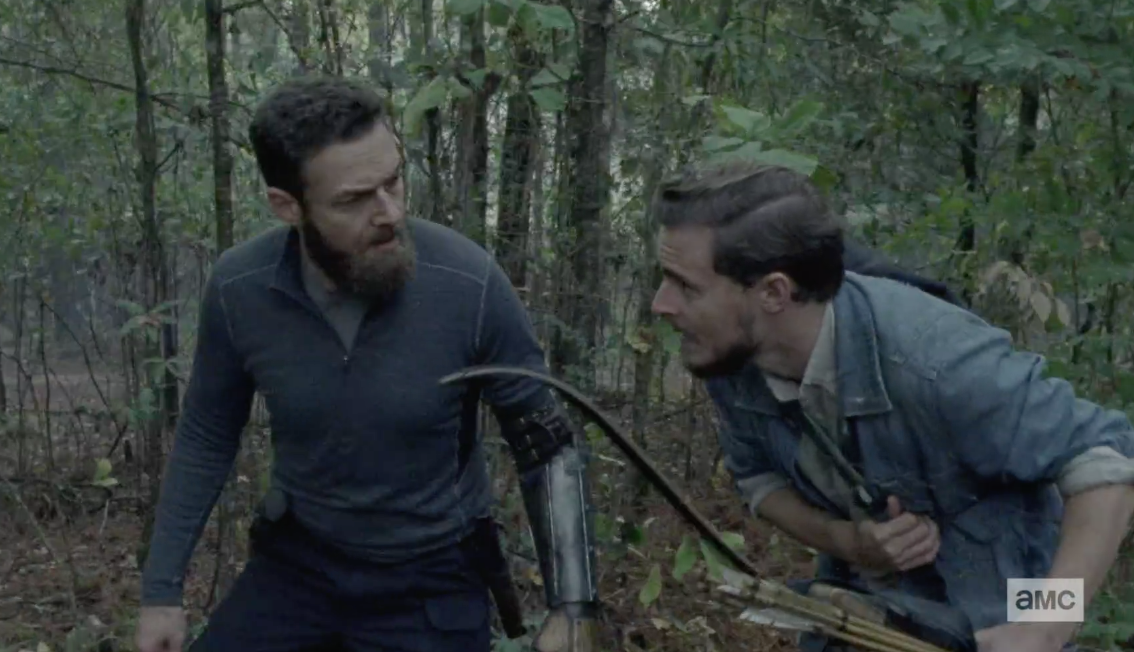 If you’re a Marvel fan, you may have smiled at that line.

“Whatever it takes” was a big part of the marketing for “Avengers: Endgame.” Ross Marquand, who plays Aaron on “TWD,” also voiced Red Skull in both “Infinity War” and “Endgame.” Marquand, who is known for his spot-on impersonations, took the role over from Hugo Weaving who previously played the “Captain America” villain.

This likely isn’t an intentional Easter egg, but it is a fun coincidence that Aaron is the person to say this line since Marquand plays characters in both fictional universes.