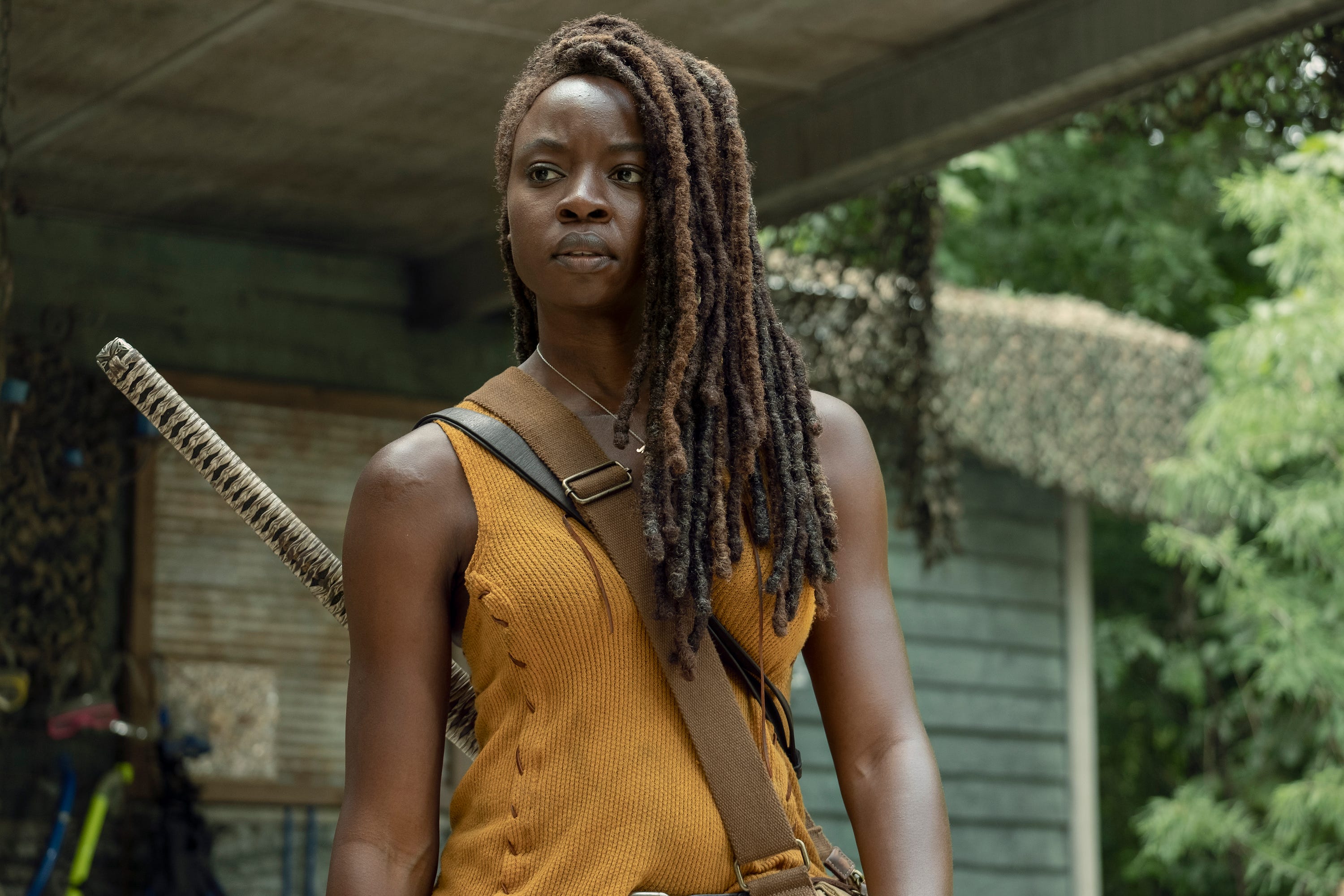 Where was Michonne on Sunday’s episode of “The Walking Dead”? 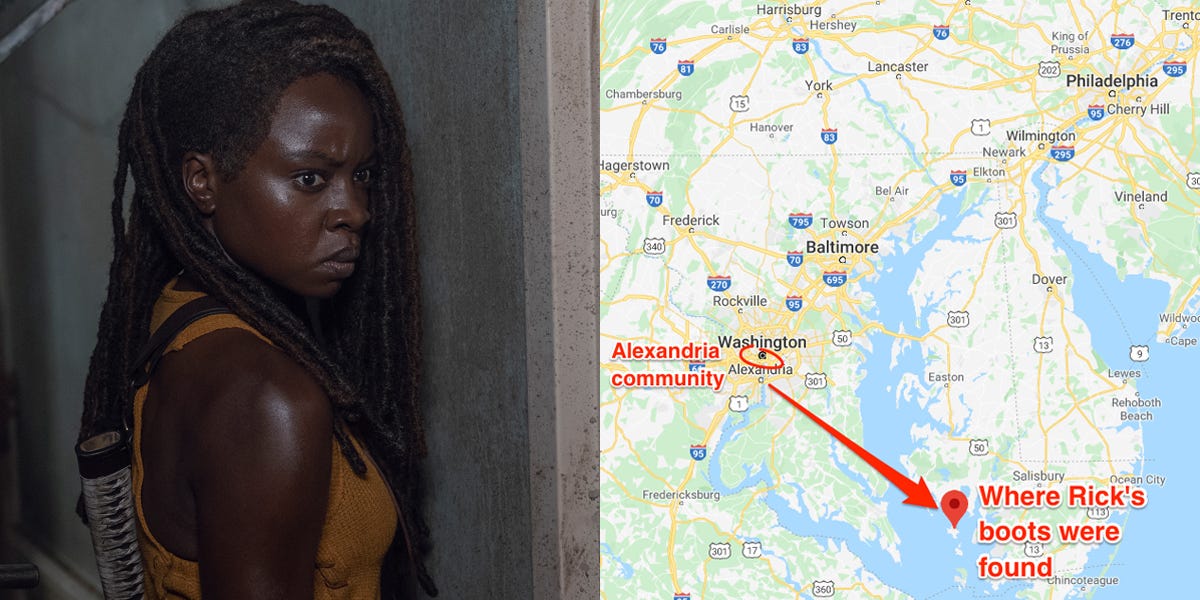 Michonne found Rick’s boots on a remote island. But where was it?

If you go revisit season 10, episode eight, Virgil tells us quickly and briefly that he was part of a fortified community on a naval base located on Bloodsworth Island.

That’s a real location in Maryland’s Chesapeake Bay. If we take a look at a map, the island is about 69 miles southeast from Alexandria, Virginia.

Where is Michonne going? 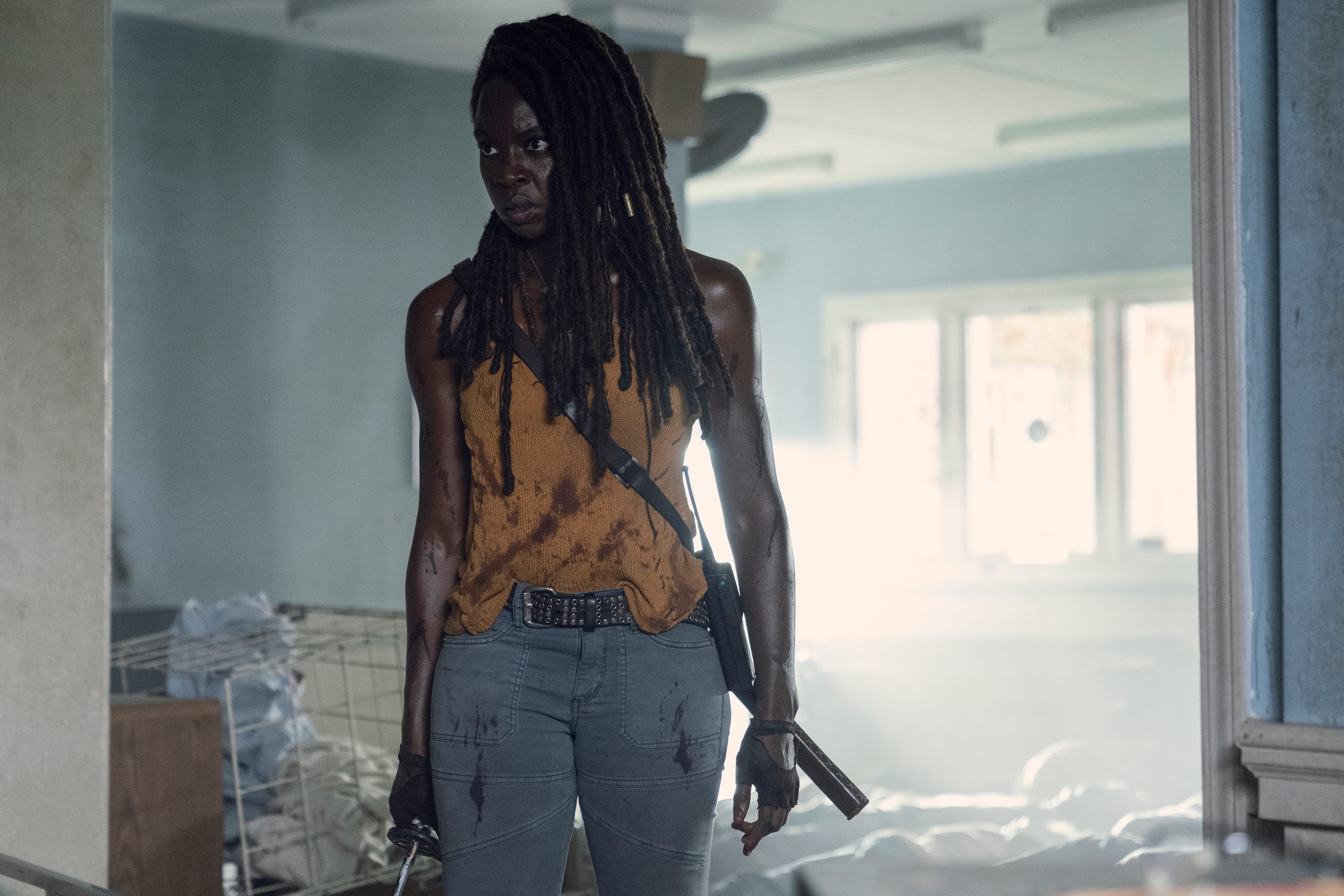 Eliza Morse/AMCObviously, we know she’s off in search of Rick.

This is the most obvious questions. Michonne vaguely tells Judith she’s going “north.” How far North?

Take a second look at those papers Michonne was rustling through and we may very well have a hint. Michonne stops on a page with two locations. One is in Virginia. The other? New Jersey.

That first location in Hopewell, Virginia, may just be a clever Easter egg. That’s a location where the third “TWD” series, “World Beyond,” was filmed. At first, we thought Michonne may be heading here, but this location is over a two-hour drive south of Alexandria, Virginia.

The New Jersey location, meanwhile, mentions a shipyard. Since Michonne says she’s heading north, she’s likely heading that way. If we had to guess which shipyard Michonne may be heading toward, there are two big ones in Jersey.

The largest shipyard in the United States is Port Newark-Elizabeth Marine Terminal in central Jersey near Newark Liberty International Airport. Another prominent shipyard is in Camden, New Jersey right across the Philadelphia, Pennsylvania border.

Why does that detail matter? If you’ve seen the Rick Grimes’ movie teaser, people thought the city silhouette shown in the 30 seconds resembled the Philly skyline.

Where exactly is Rick and who is he with? AMCRick was flown off in a helicopter years ago. Currently, he’s the Carmen Sandiego of ‘The Walking Dead.’

Our best hint is somewhere north. But what does that mean?

When we last saw Rick, he and Jadis/Anne were flown away on a helicopter with a symbol on it. At New York Comic Con in October 2019, chief content officer of “TWD” universe Scott Gimple said that symbol is representative of three interconnected communities.

We don’t know what that stands for yet, but it’s more than likely Rick is either with them or being held against his will by them. We’ll be able to share a little bit more information on Rick’s connection to the CRM soon.

Why did Rick leave his boots behind? 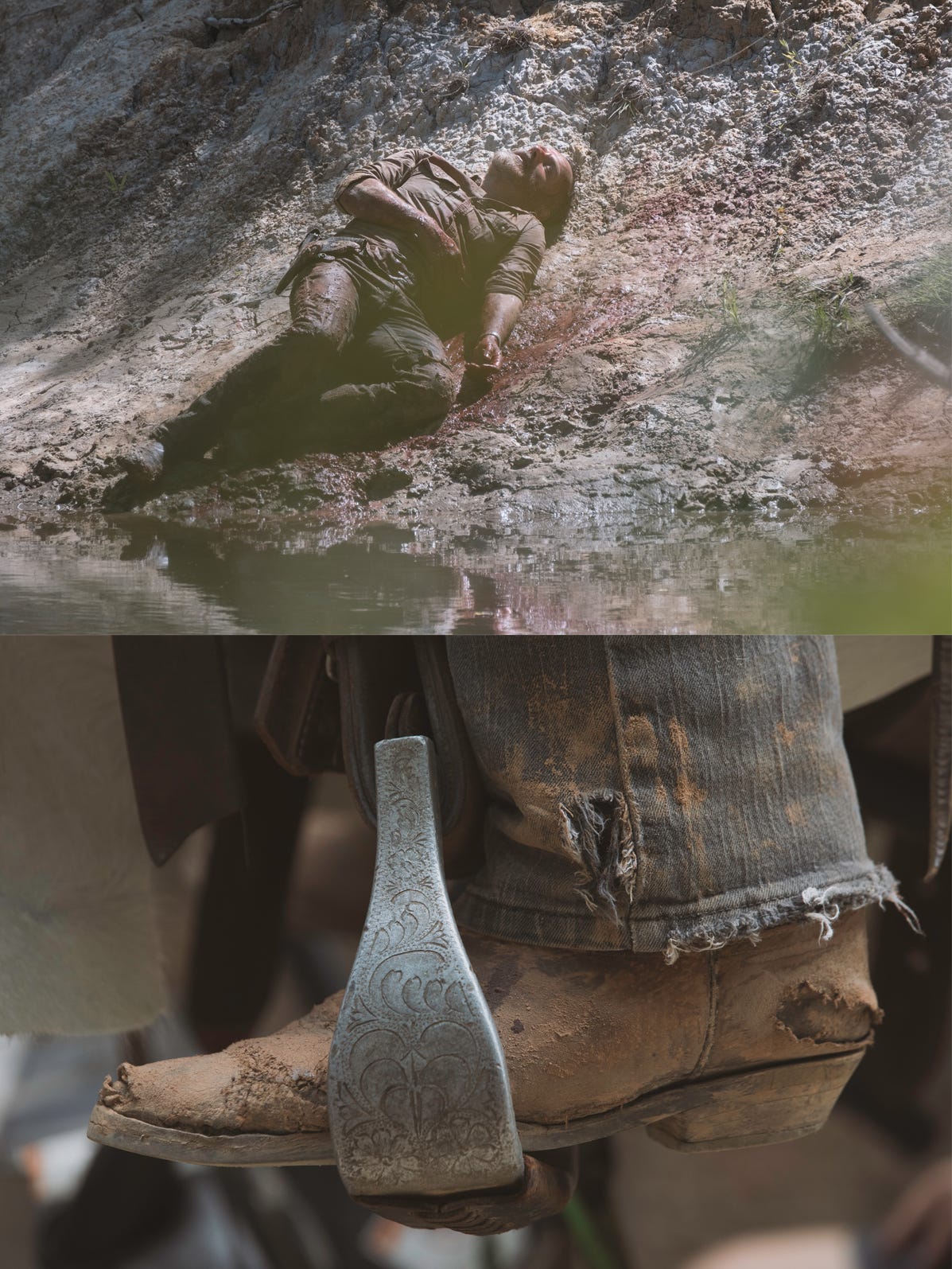 Jackson Lee Davis/AMCWe can’t even imagine seeing Rick with anything but his trademark cowboy boots on his feet. The last time we saw him, they were still in place.

It seems like a strange choice for Rick to ditch his iconic cowboy boots.

Was he forced to remove them for some sturdier combat boots? If the members of the CRM have a militaristic dress code, perhaps.

Even if Rick wanted to keep his old boots, they weren’t in the best of shape. After 10+ years, one was starting to get a hole in it. You need good shoe wear in the zombie apocalypse.

Showrunner Angela Kang told Insider via email why it was important for Michonne to find Rick’s boots.

“The boots are an iconic part of Rick’s costume, would have been on his person at the time of the bridge explosion, and would be immediately recognisable to Michonne, so that’s how we came to have this first clue,” Kang said via email.

Who drew that artwork of Michonne and Judith on the cell phone? 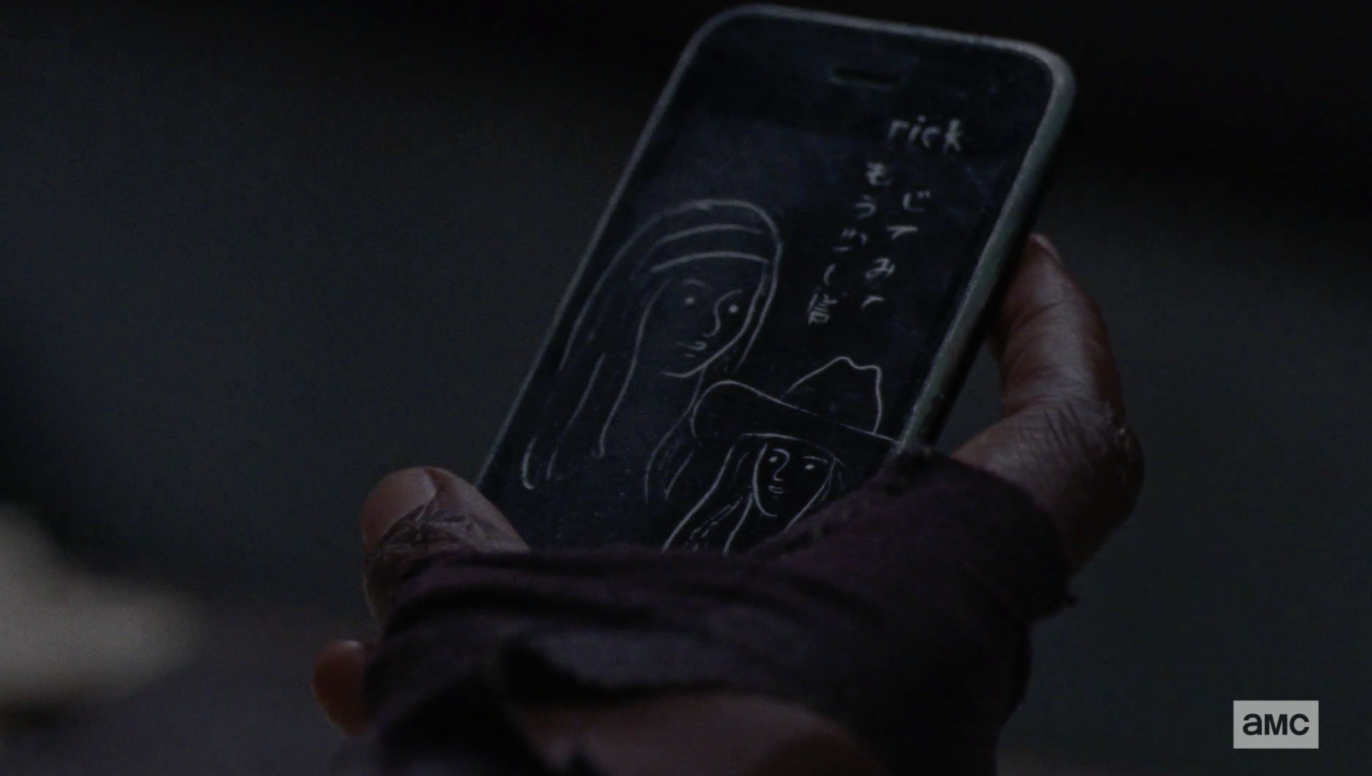 AMCMichonne finds a drawing etched into an old iPhone.

Michonne finds a phone with a drawing of, what appears to be, Michonne and Judith etched onto the screen with Rick’s name above it.

If Anne was still with Rick, we bet it was her. If you recall, she was previously drawing images of people in the community. She drew the artwork at the Hilltop of Glenn, Hershel, Beth, and more.

Why is the drawing of Judith accurate to present day? 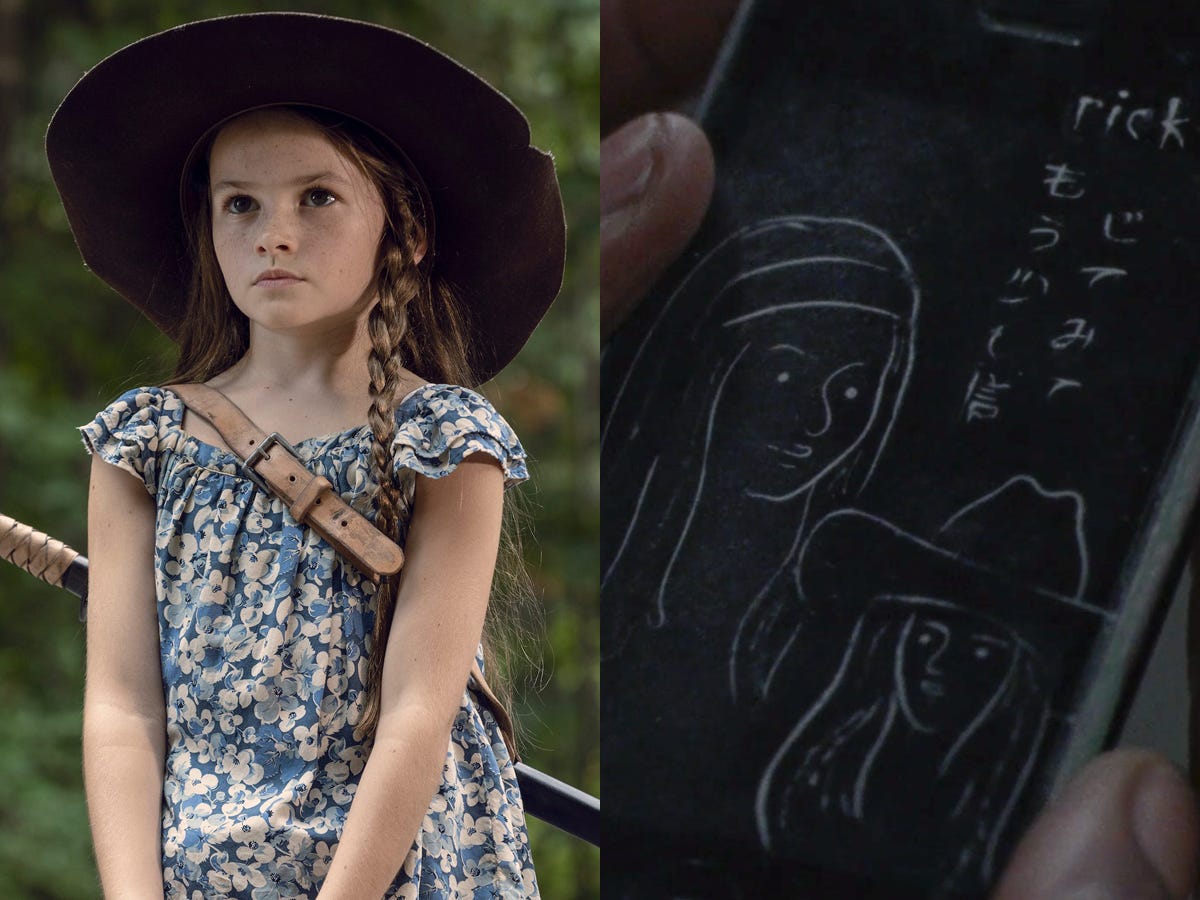 AMCWhy is there a timely sketch of Judith on that phone?

The drawing doesn’t show Judith as the toddler Rick remembers her as but what she looks like now.

Has he had a way to check in on her without anyone knowing? And, if so, wouldn’t he have known about R.J. as well?

What does the carving underneath Rick’s name say on the phone? 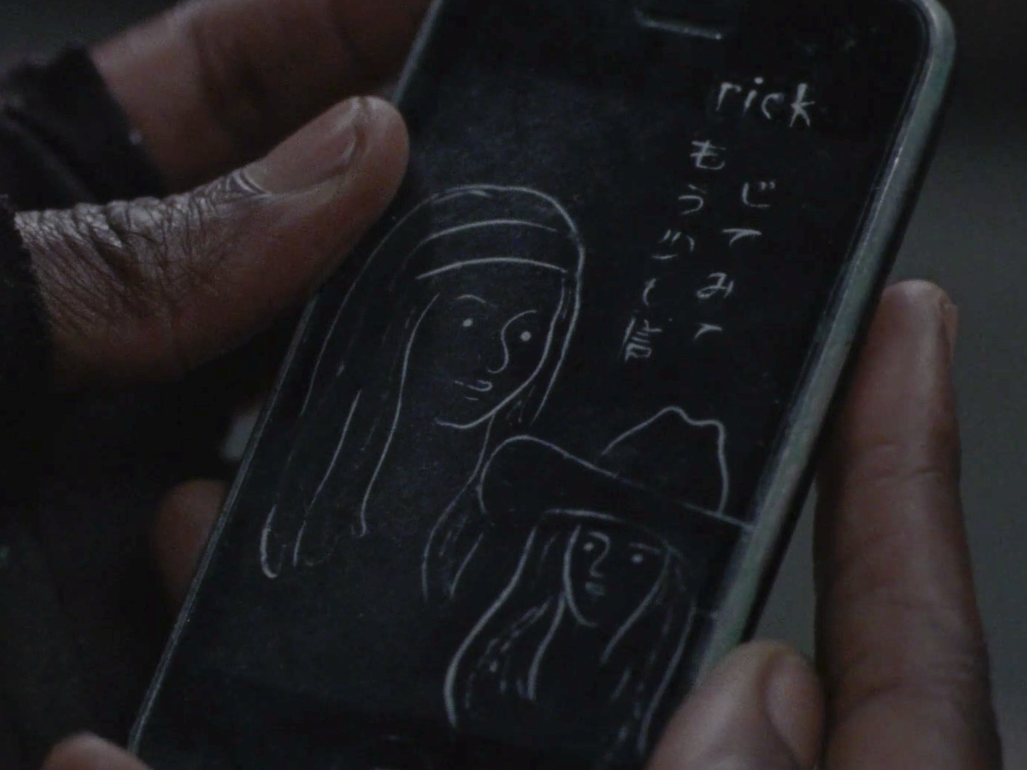 AMCThere are some Japanese characters etched under Rick’s name.

That seems like a fitting message for Rick to leave for Michonne.

Who is that large group Michonne sees at the end of the episode?

Michonne comes across two people at the episode’s end who are desperately trying to catch up to a group. Michonne says she’ll help them and then sees a very organised caravan of people wandering in the same direction.

Who are they and where are they going?

“We coordinated with Scott Gimple on what he needed the end point in the episode to be in order to set up the handoff to the TWD Universe,” said Kang via email.

Perhaps it’s something that will be explored in the next “Walking Dead” spinoff, “World Beyond,” or the Rick Grimes’ movie.

The entire scene has a very western, gold rush feel to it and that may be the point.

Kang recently told The Hollywood Reporter that they planned out a storyline for season 11 with “some real western” and thriller elements to it.

OK, but who’s going to look after Judith and R.J.? 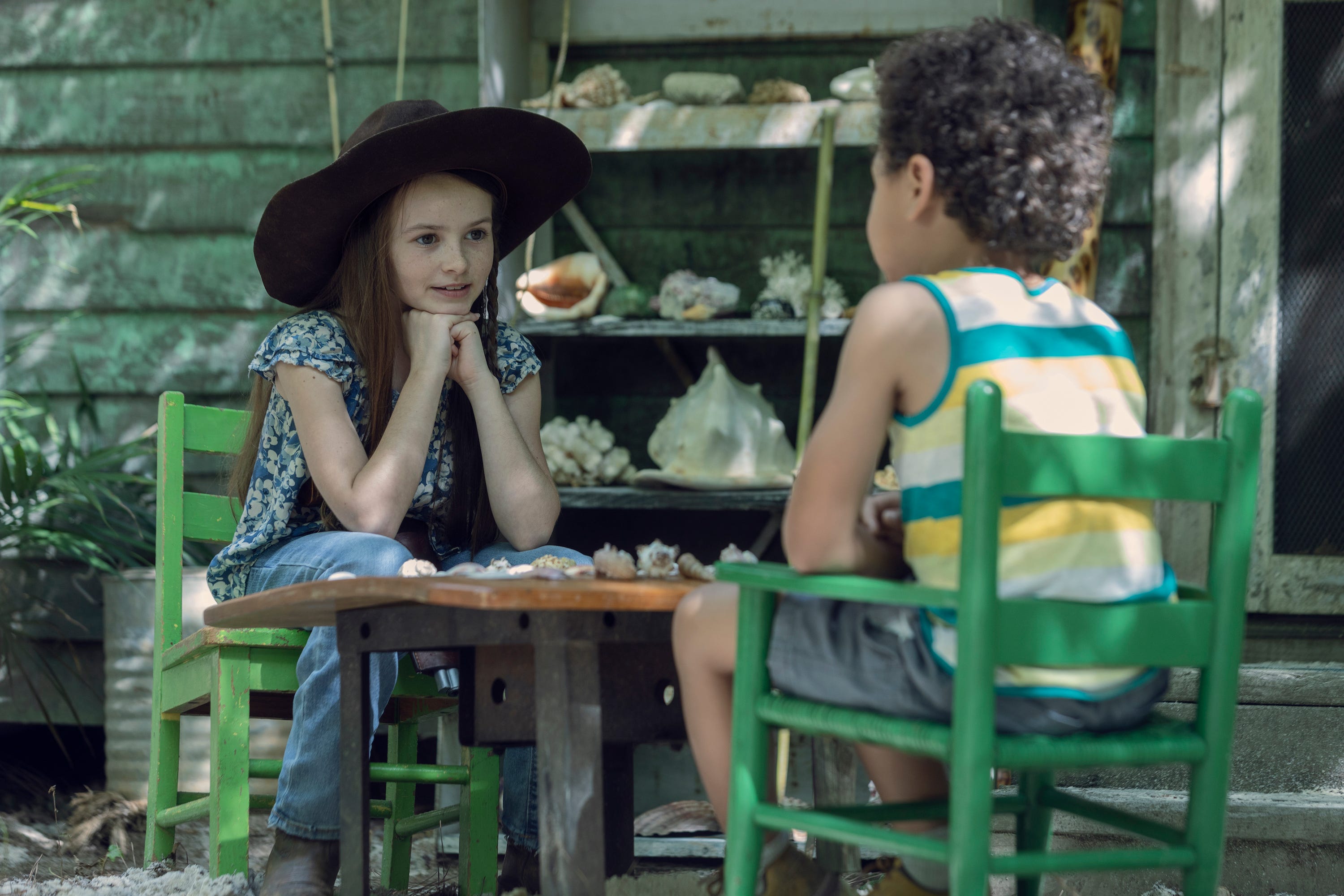 Jackson Lee Davis/AMCMichonne’s just leaving her kids behind and is hoping the community understands.

Congratulations, Uncle Daryl! You’re the most likely candidate to be looking after Rick’s kids. Daryl was considered Rick’s brother, after all, and was extremely close with Michonne.

In all seriousness, raising the Grimes’ children is most likely going to be a joint effort between members of the community. While speaking with Michonne, Judith says she knows to listen to Uncle Daryl and mentions “Tia Rosita” and her daughter Coco. Then, of course, there’s Negan, who put his own life on the line to save Judith during a snowstorm on season nine.

Judith has always been a beacon of hope for the community and we’re sure everyone in Alexandria will continue to look out for the Grimes’ children, especially if they know there’s a chance Rick is alive.

How does Virgil fit into this larger story, if at all? 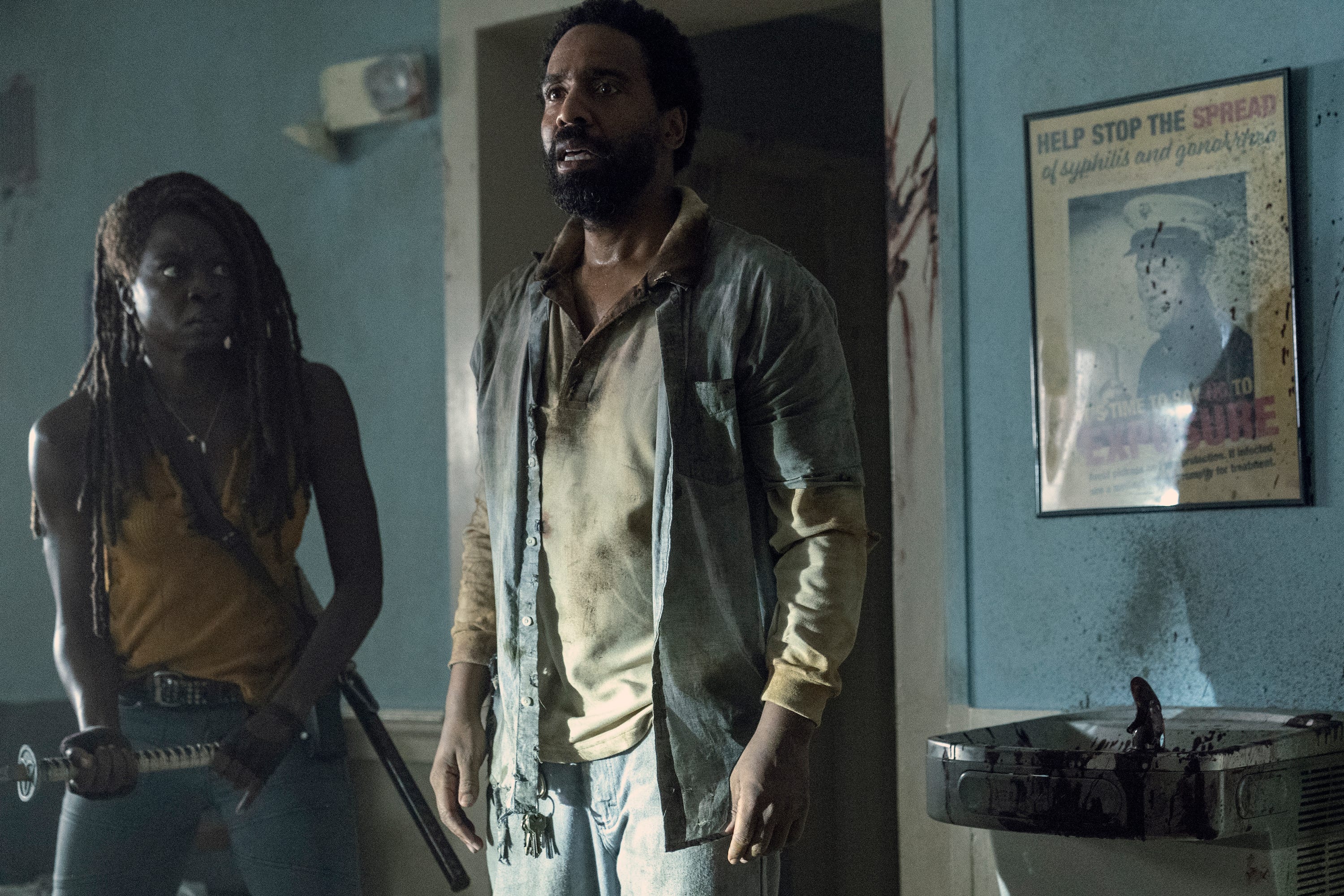 Eliza Morse/AMCWe’re not planning on seeing more of Kevin Carroll’s character on ‘TWD.’

We’ll admit, the kidnapping of Michonne was a bit tired (we had just seen Michonne blindsided by an old friend on season nine).

But it seems like Virgil’s appearance on “The Walking Dead” simply served as an impetus for Michonne to discover Rick’s boots and go off on her own adventure. We’ll have to wait and see if he appears again. 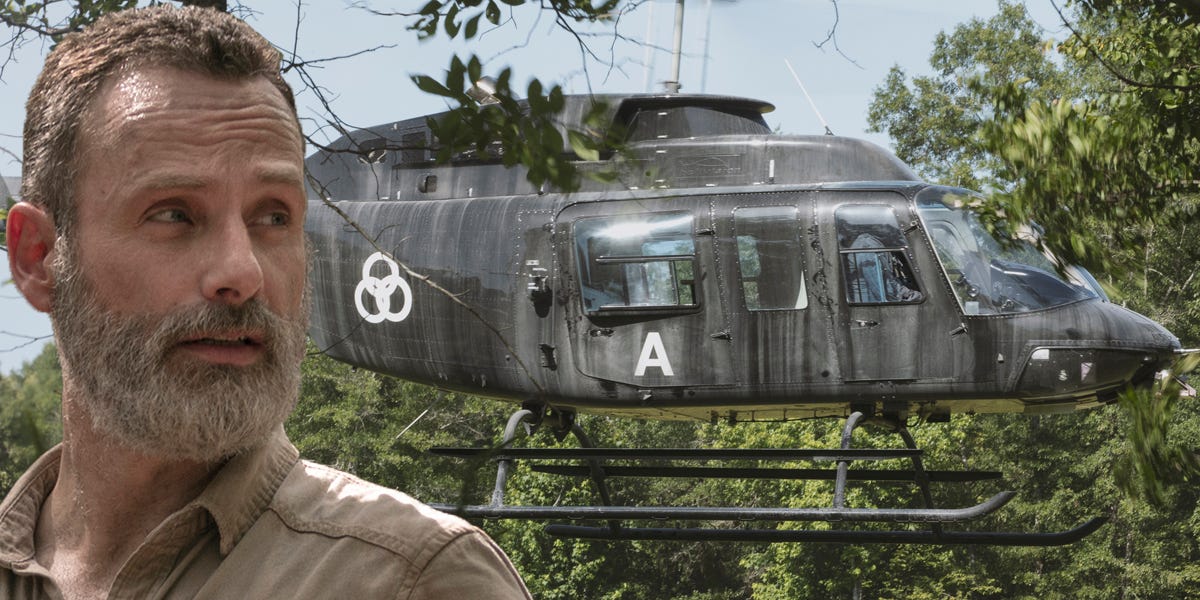 For a while on “The Walking Dead,” Anne was offering others to the helicopter people labelled as either “A” or “B.”

On Rick’s final episode of “TWD,” Anne referred to him as a “B” when she was previously calling him an “A.” Showrunner Angela Kang previously told Insider in 2018 Anne may have been lying in that moment to save her friend. We thought the letters may have stood for someone before or after they were turned.

Kang said that was a good guess, but incorrect.

“‘A’s and ‘B’s get a different kind of treatment,” said Kang. “And you saw that both Rick and Gabriel, and also Negan, were going to get zombie bites applied to them.”

Does “A” stand for people who were getting tested and treated with potential cures for the zombie virus? Maybe.

“That’s part of the fun mythology of the movies,” said Kang.

It seems like we’ll have to wait to get our answer. Universal Pictures is working on a Rick Grimes’ movie with AMC.